“Like most people, I have let my dreams lay dormant, finding every excuse not to take the first step, whether it be money, time, or inevitable responsibilities. In pursuing this trek, I want to prove that people have more agency than they think—that they have more power over their path than society may lead them to believe. In taking my first step, I hope that it will inspire others to take theirs, whatever that may look like.” –Taylor Demonbreu

To celebrate International Women’s Day, we’re sharing the stories of several individuals who are pushing the boundaries of travel, adventure and human achievement—and they just happen to be women. 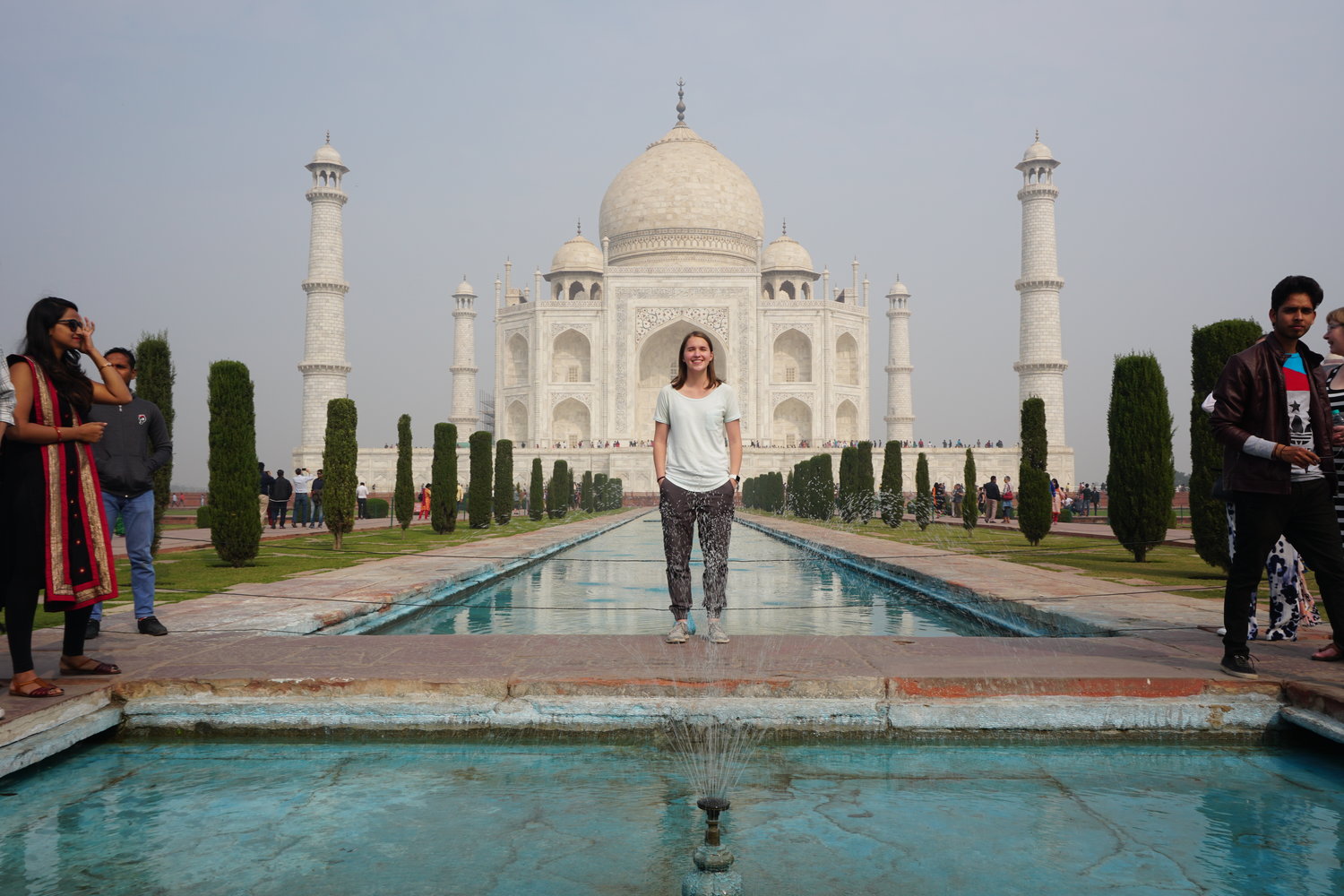 After countless years of hard work, dedication, and sacrifice, Taylor Demonbreun landed her dream summer internship at a prestigious New York investment bank on Wall Street. The last 10 years of her life were solely dedicated to this goal: studying until 2:00 a.m. to achieve the perfect GPA, graduating from Vanderbilt University in Nashville, Tennessee, with a double major in Economics and Public Policy, and spending hours networking, e-mailing, and preparing for interviews. She sacrificed relationships with friends and family, exercise, and time but it seemed like what everyone else was doing.

A semester abroad at the University College London during her junior year made her question it all. She balanced full-time studies with solo travel through 20 European countries, gaining real-world experience she had only read about in textbooks.

“I reached a new level of self-awareness. As an introvert, a lesson that did not come easily was asking questions, but I had no choice, and most everyone I met was willing to help. As I reached out to others, I was able to more fully engage with a culture instead of just passing through. But perhaps most importantly, I discovered how pushing yourself to your limits allows you to more fully know yourself. While my experiences abroad were the most I have ever been out of my comfort zone, they were also the most fulfilling.” 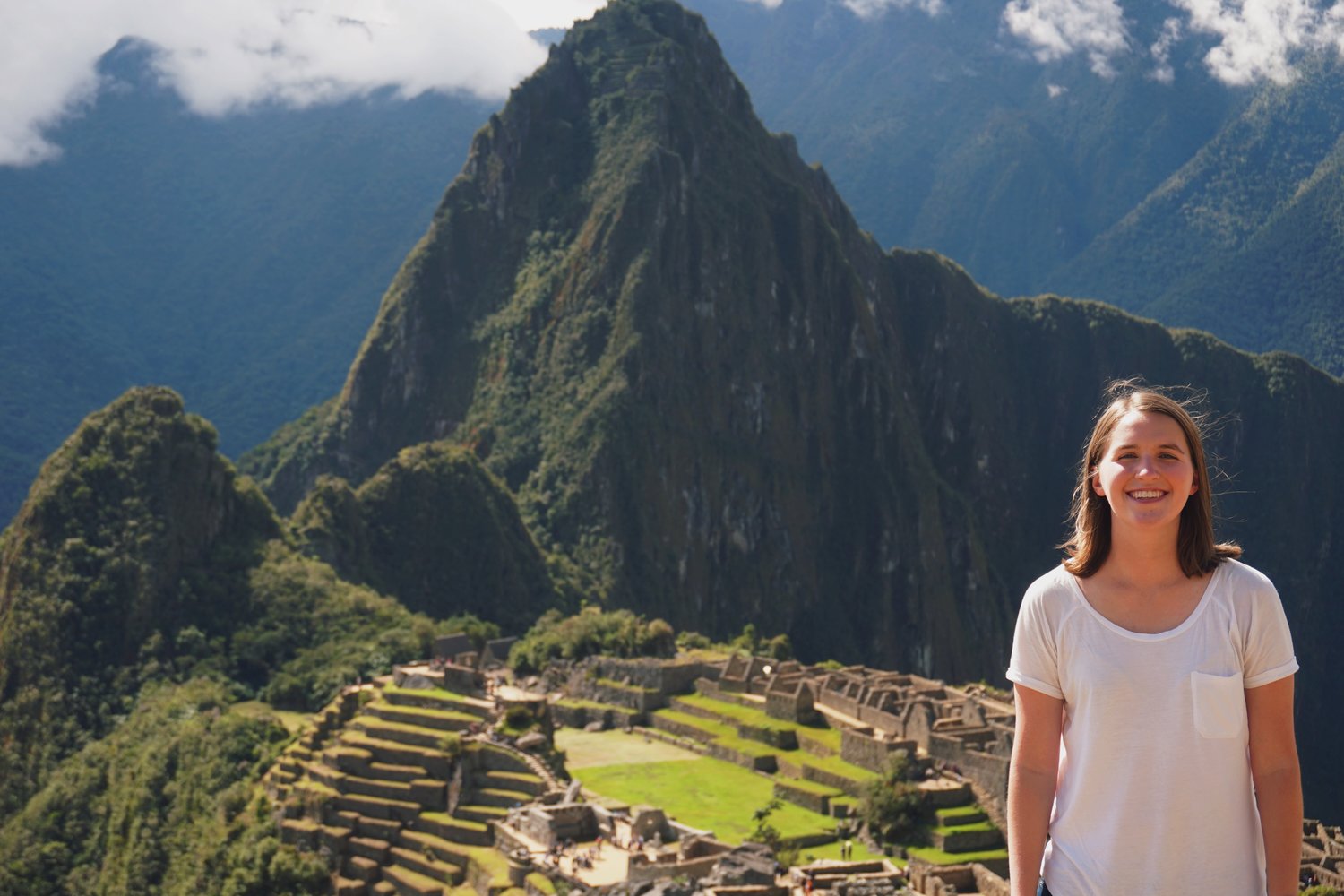 Taylor returned stateside for her prestigious summer internship but found herself dissatisfied. She dreamt about the places she wanted to explore, compiling a list of countries and researching potential trips. “The list of countries continued to grow and at some point, it hit me: why not visit every country?” Inspired by Cassie De Pecol’s 2018 record of one year and 194 days, Taylor set off a mere two weeks after graduating with a goal of visiting every nation in the world. One year and 189 days later, the 24-year-old arrived in Canada, her final country, becoming the new Guinness World Record Holder for the Youngest and Fastest person overall, as well as the Youngest and Fastest female to visit all 196 sovereign countries worldwide. 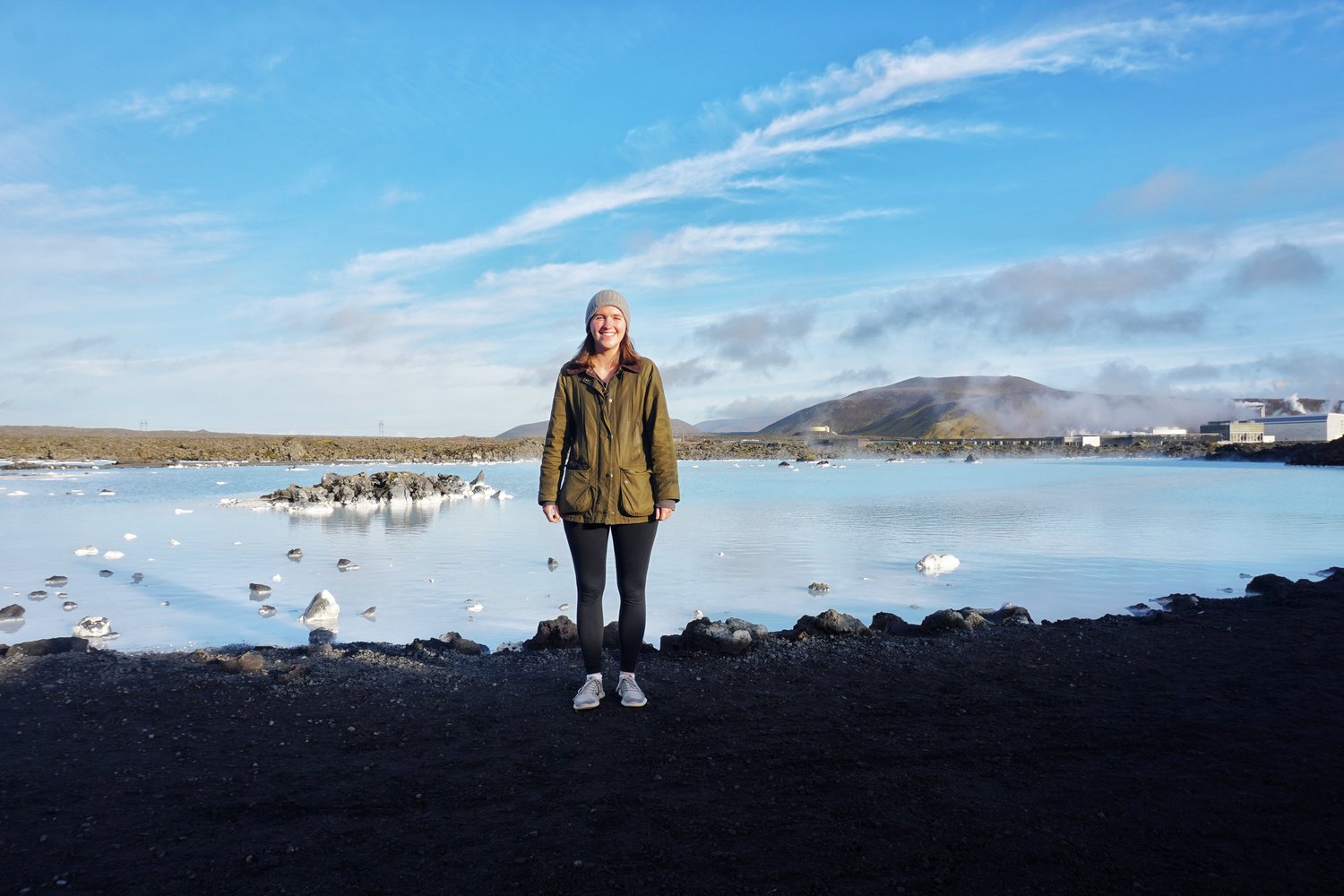 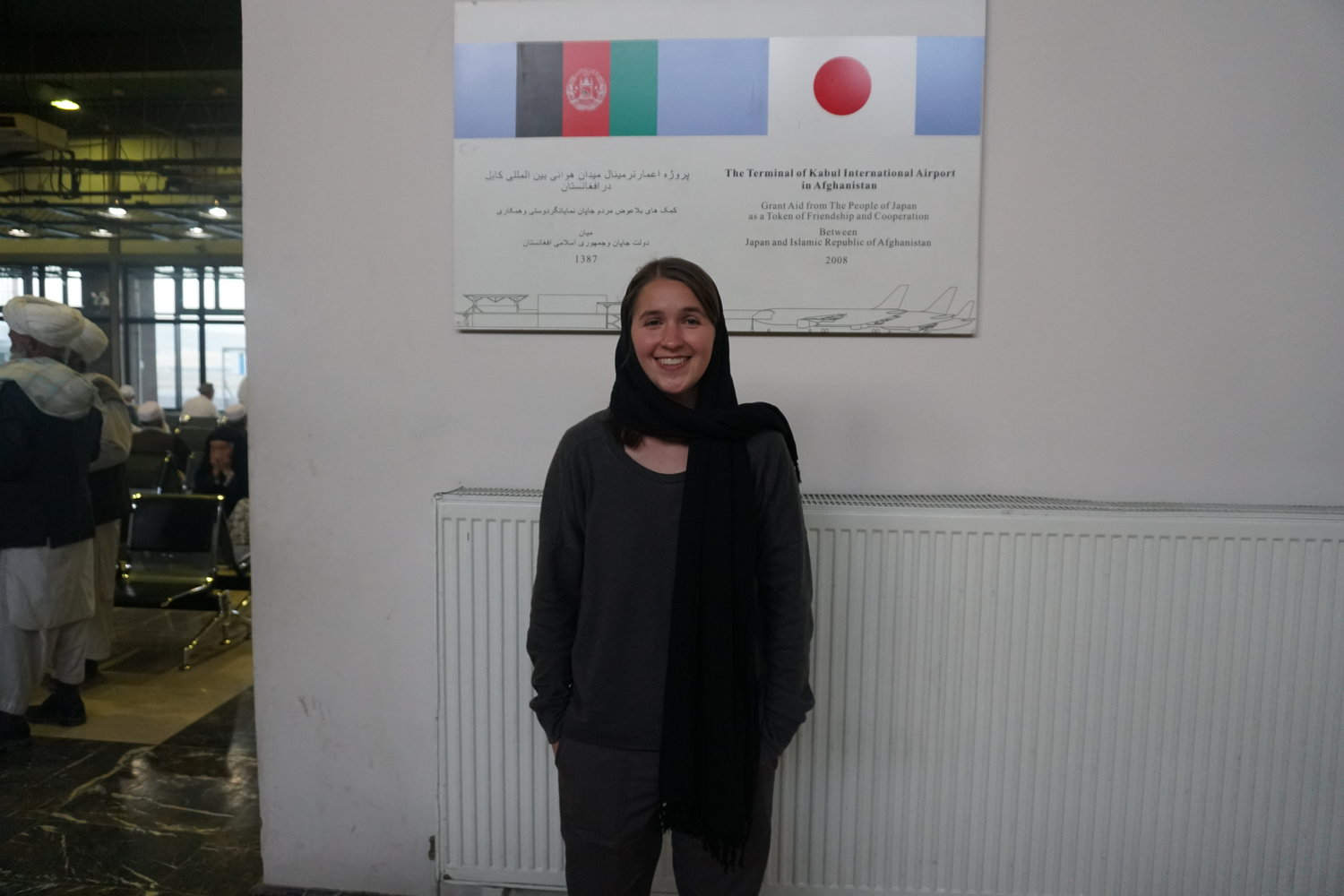 This world record arguably isn’t the biggest takeaway from Taylor’s experience. She is challenging stereotypes and championing solo travel for women all over the globe.

“Particularly, to all the young women who’ve been told that they could not safely travel on their own, I want to challenge this stereotypical notion. Young women can, and should, see as much of the world as they can. I believe that travel is vitally important to shaping one’s worldview, so it is important for everyone to get out and learn more about the world that they live in.”

A 21-one-year-old female, Lexie Alford, broke Taylor’s record in October 2019, becoming the youngest person to travel to all sovereign countries. 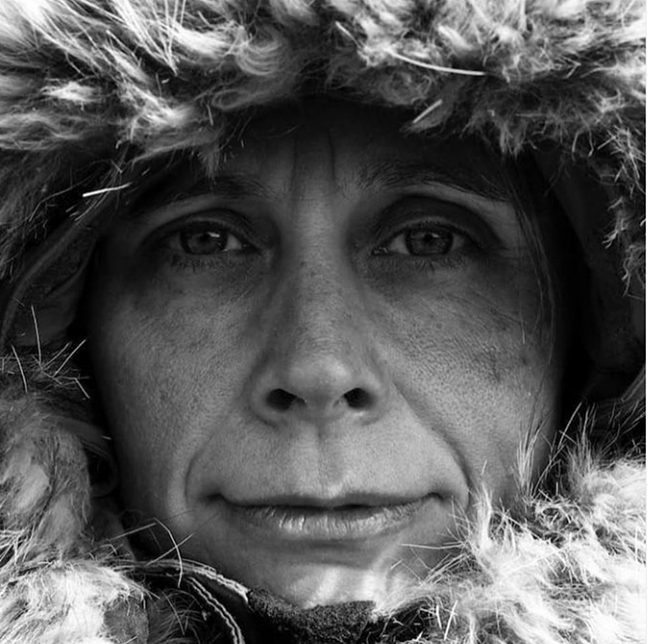 These stats were logged by Wendy Searle’s expedition manager after she arrived at 90 Degrees South, the geographic South Pole. She is the seventh female ever and the fourth fastest solo unsupported female to complete the 720-mile expedition. The 42-year-old mother of four hauled 86 kilograms of food, fuel, and supplies across Antarctica, skiing for up to 12 hours a day in temperatures as low as -35°C. Before starting her polar training program five years ago, she had never skied.

As part of her full-time Ministry of Defence press office job, Searle acted as the UK operations and media manager for the 2016/2017 SPEAR17 expedition, the first unsupported full traverse of Antarctica completed by a team of army reservists. Inspired by this expedition, she researched polar history and became intrigued by the continent. “There’s something about Antarctica that is so otherworldly, extreme, pristine, beautiful, and stunning,” Searle told Give Me Sport. 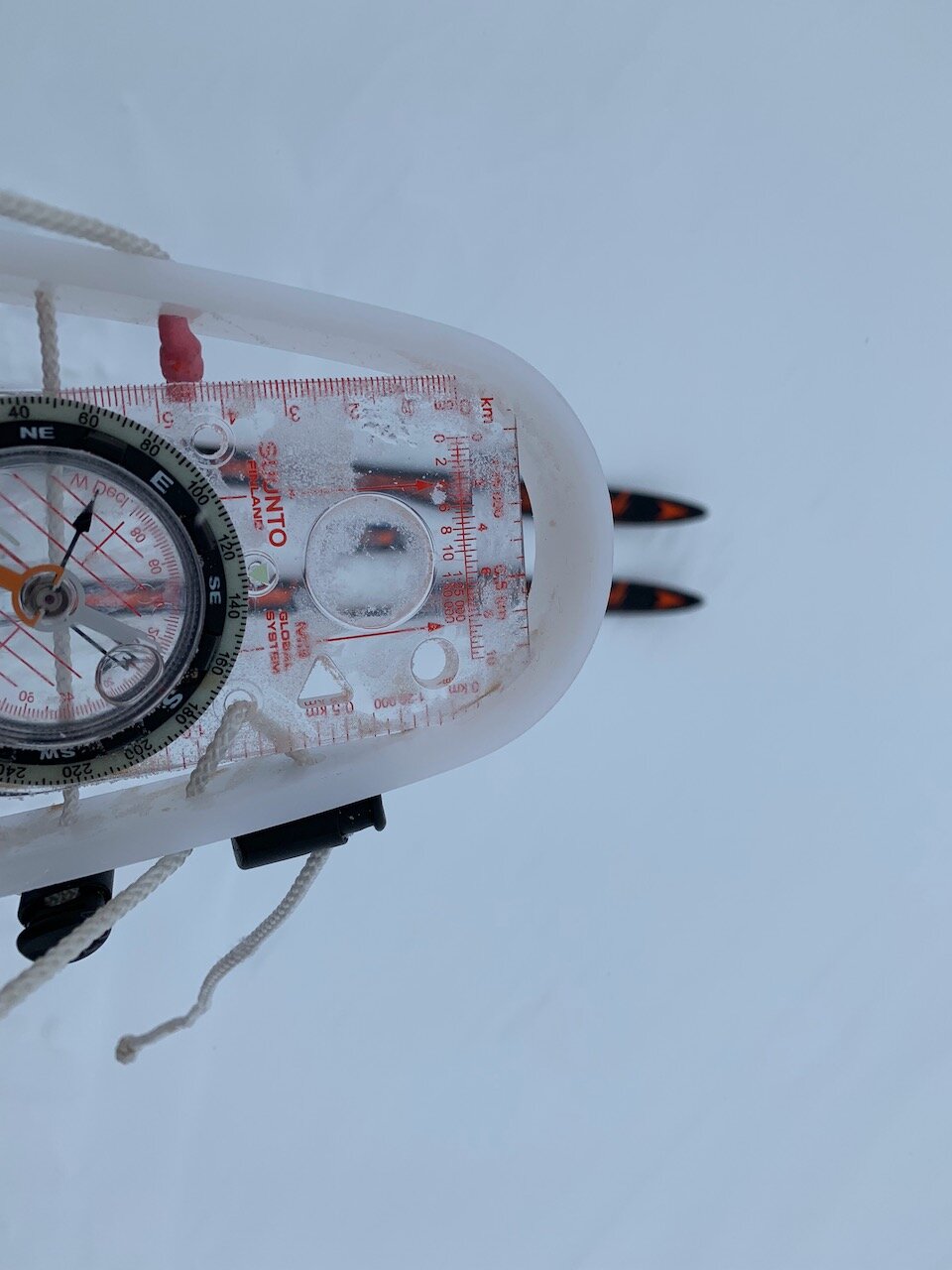 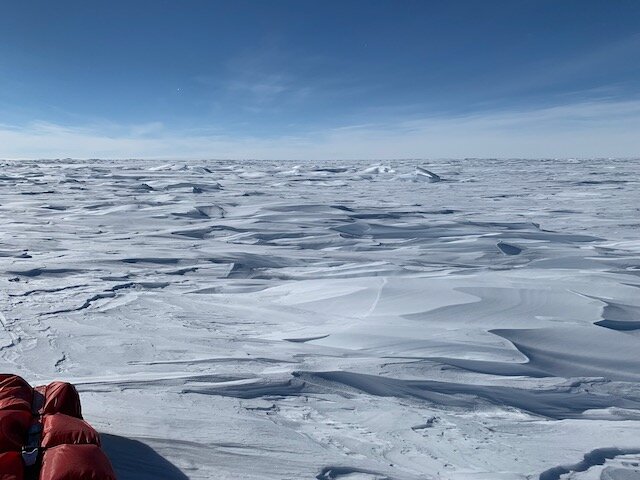 It took her five years to prepare for the expedition including raising funds, learning to ski, undertaking first aid training, physical training at home, in Norway and in Iceland, and completing a 350-mile ski crossing of the Greenland ice sheet. Wendy commenced a serious physical training program at the end of 2018, which involved exercising twice a day, six days a week lifting weights, running up and down hills, and hauling tires for hours. She juggled all of her training and preparation around a full-time job and busy family life. 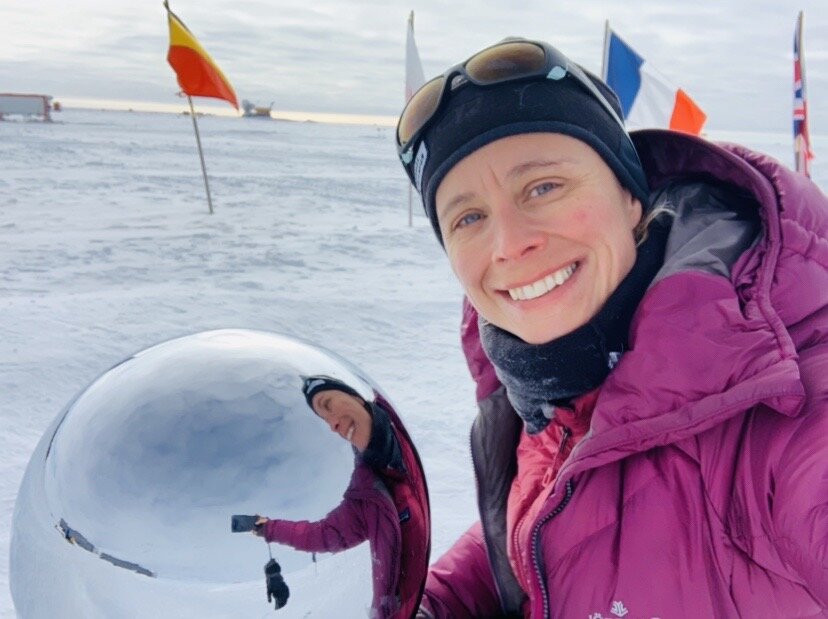 Her goal is to inspire women and girls to pursue long-term goals and change perceptions about women undertaking polar expeditions and travel. Searle told the Guardian: “If you’re not seeing women and mothers going on expeditions and doing amazing things, then how do you know women do that?” Indeed, they do. The 2019/2020 expedition season saw the most female soloists in the history of Antarctic travel, including 29-year-old Mollie Hughes, who successfully became the youngest woman to ski solo to the South Pole. She added this to her impressive repertoire— she is also the youngest female to successfully climb both the north and south sides of Everest. 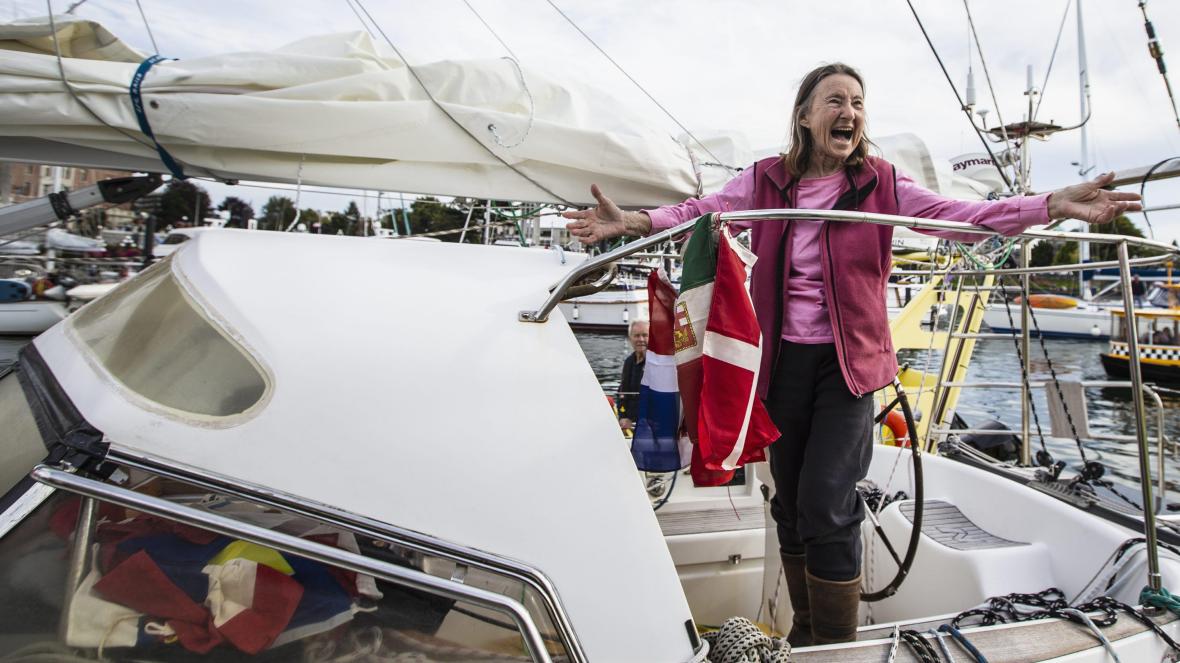 In early September 2019, 77-year-old Jeanne Socrates broke a world record as she sailed her 38-foot boat, Nereida, into a Victoria, British Columbia, harbour. She began her solo, non-stop unassisted circumnavigation of the world 320 days earlier, and successfully became the oldest person to sail around the world.

This wasn’t Jeanne’s first attempt at a non-stop sail on her own. In 2009, rigging problems and an engine replacement stranded her in Cape Town for three months. In 2012, damage caused by a knockdown on Day 72 near Cape Horn deemed her mission unsuccessful. Her third attempt in 2013 proved victorious, despite delays and weather problems, and she set the Guinness World Record for oldest woman to sail around the world alone, non-stop and unassisted. Determined to set sail again after the win, she undertook two circumnavigation attempts in 2016 and again in 2017 which were thwarted due to weather, injury, and gear-related problems. After recovering from a broken neck and rib-cage injuries, she embarked on her most recent and successful circumnavigation. 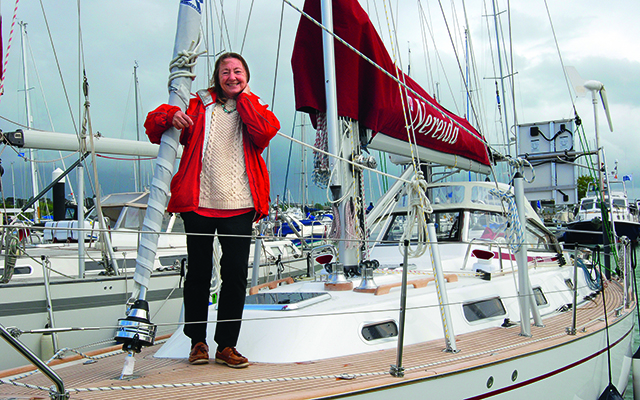 Jeanne and her husband took up yachting in 1994. The pair sailed all over the world for four years, including from Sweden to England, to Spain, Portugal, Gibraltar, the Caribbean, United States, Canada, Virgin Islands, and Venezuela. Jeanne’s husband, George, was diagnosed with cancer and passed away in 2003. Jeanne continued sailing, this time alone.

“It was quite a daunting task, getting to know the various systems on board Nereida and dealing with a variety of problems. Fortunately, boat friends would come to my rescue with helpful advice, useful tools, perhaps some muscle, often expertise I lacked, and lots of moral support. But it soon became clear to me that if I wanted to persevere with sailing and living on board Nereida, practical problem-solving was something I had to expect to have to learn to cope with.”

As she gained knowledge and expertise, tackling ocean passages and solving problems onboard, she gained the confidence to undertake a round-the-world sail. The rest, as they say, is history. 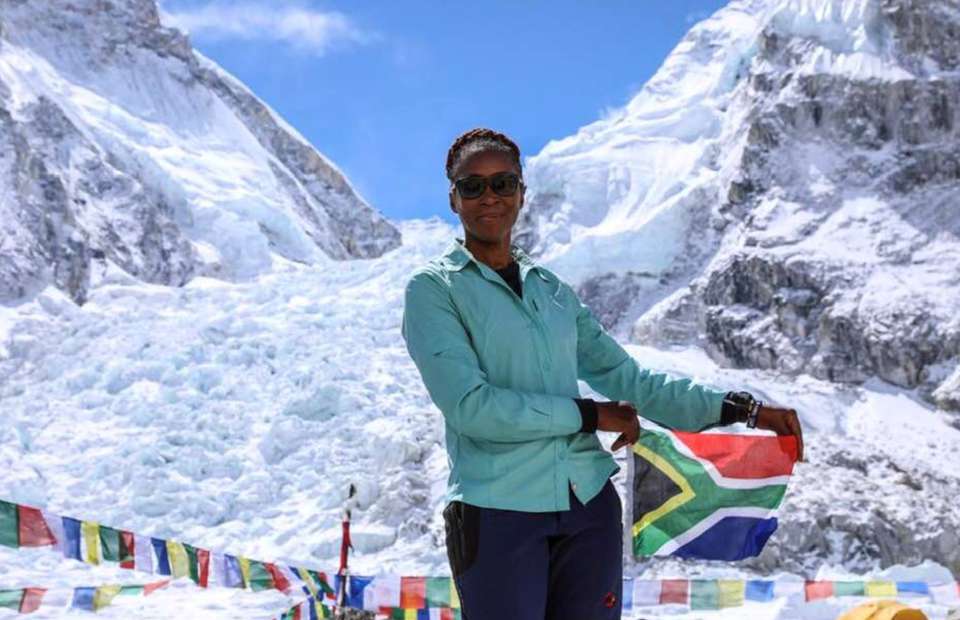 A Johannesburg business executive and mother of two boys, Saray Khumalo was vacationing in the United States when a local asked her if she had ever climbed Mount Kilimanjaro, Africa’s tallest mountain. She told Vice, “I just thought, This is my story. I should be telling you about Kilimanjaro. And I put it on my bucket list.” After several years of saving, she not only summited Kilimanjaro, but made a goal to complete the Explorers Grand Slam. The Grand Slam requires reaching the North and South Poles as well as climbing Seven Summits: Everest (Himalayas), Aconcagua (Argentina), Denali (Alaska), Kilimamjaro, Mount Vinson (Antarctica), Carstensz Pyramid (New Guinea), and Elbrus (Russia).

In 2014 Khumalo set her sights on Everest. While at Everest base camp on April 17, 2014, she heard an avalanche roaring down the side of the mountain, claiming the lives of 13 sherpas. She abandoned her attempt, returning the next year with hopes of summiting. During her second attempt in 2015, she was climbing with a sherpa between Camps 1 and 2 when a massive earthquake struck Nepal, killing nearly 9,000 people and injuring more than 22,000 throughout the country. Seventeen climbers were killed at Everest Base Camp. For a second time, Khumalo abandoned her mission. She planned her third attempt but was forced to postpone after a cycling accident put her in a three-week coma. Finally, in 2017 she returned to Everest, successfully reaching the South Summit, a mere 100 metres from the top. Extreme weather and frostbite forced her to descend, and she was evacuated by helicopter to the nearest hospital where she was treated for exposure injuries. 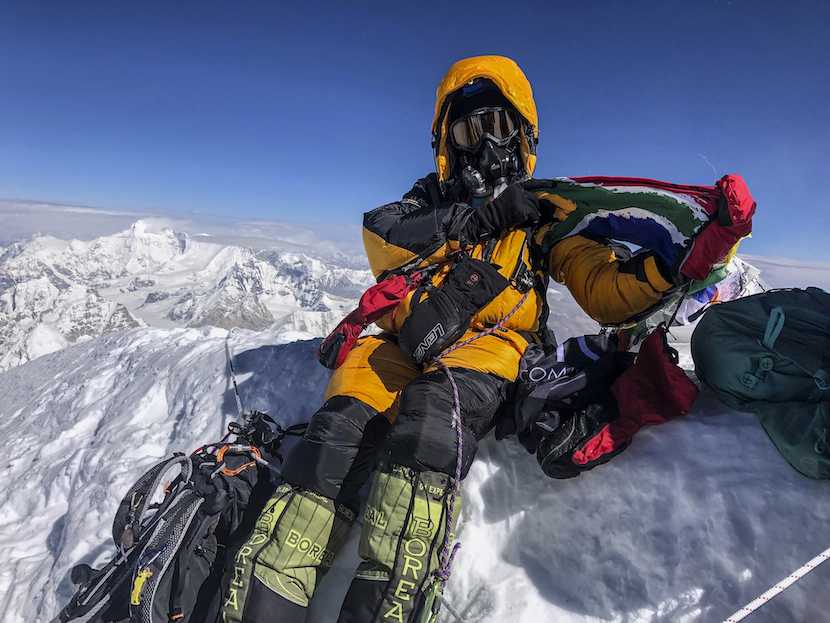 “My mom used to say that it doesn’t matter that you are a girl,” Khumalo told Vice Sports. “You can be anything you want, and you don’t [need] another man or another woman or another person to help you. Only you can help you and only you can stop yourself from reaching for the sky. I believe that my achievement means that, in a small way, I took every African, who might have not believed they could achieve their goals, with me to the top of the world. This shows that black women can do anything.” 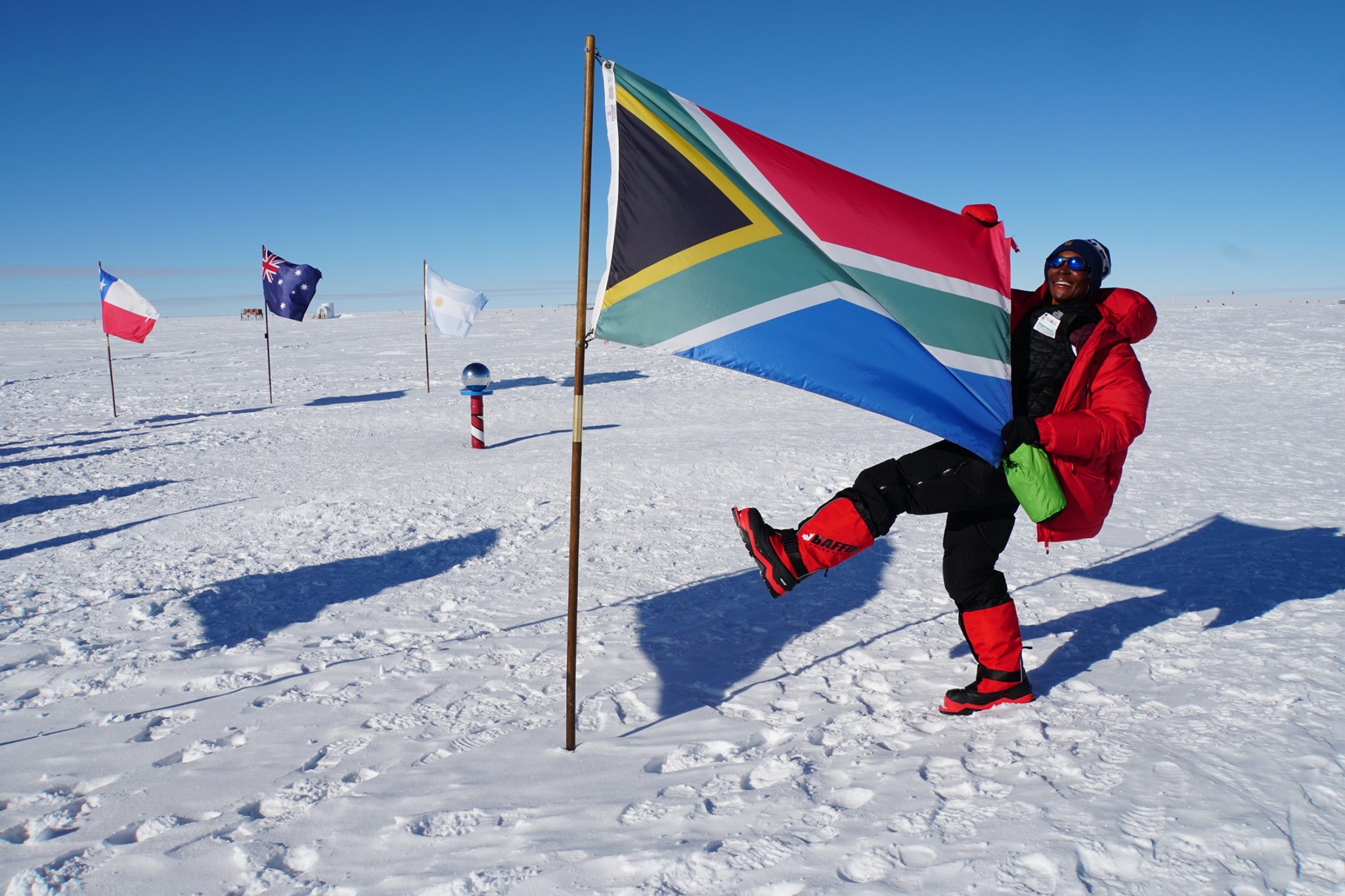 Like overlanding, difficult expeditions require commitment, perseverance, and sacrifice. Achievements are worth celebrating, but in the end, what you learn and how you grow during the journey is just as important as arriving at the destination.

For more information and resources about International Women’s Day, visit their website. The aim is to celebrate women’s achievement, raise awareness against bias and take action for equality. This year’s theme is #EachForEqual.