I’ve kept no secret about the fact that I am a long-time Toyota fan. In fact, I own three of them, all four-wheel drive: a 2002 Tacoma TRD, 2007 4Runner, and this year we’ll celebrate our 30 anniversary together—the “we” is my 1982 Son of a Land Cruiser Hi-lux and yours truly.

Toyota has come a long way since the 1960s and 70s, when boot-step’n Detroit steel driving cowboys would but laugh at a Toyota Hi-lux that pulled up on the ranch or job site expecting work. The puny 2-liter 18R 4-cylinder could barely get out of its own way, the rattley paper-thin doors felt they’d blow a window out if you slammed them too hard, and creature-comfort amenities, they were akin to a guest room at the Alcatraz Inn. However, they would run, ever so rattley and slowly…forever. In an attempt to convince America that Toyotas were not flimsy imported junk, they ran ad campaigns with proud Hi-lux owners boasting 300,000, 400,000, or even a million miles on their trucks (mine has a mere 360,000 +/-).

Over the next several decades, Toyota’s “mini” trucks, the Hi-lux and the Tacoma, along with the company’s line of passenger cars, solidified their reputation as a manufacturer of premium quality vehicles. When the Tundra arrived on the scene in 2000 it received several prestigious awards such as Motor Trend’s Truck of the Year and Consumer Reports Best Full-Size Truck, and the boot step’n crowd started kicking tires, Tundra tires. These 1st generation Tundras were built in Princeton, Indiana, with 65 percent American-sourced parts. The 2nd generation Tundra, offered in 31 different configurations, addressed some earlier impressions that it was still a light-duty truck; higher payload and towing capacities, a hefty 5.7-liter (381hp) V8, and slightly larger dimensions.

When Expedition Portal Editor Matthew Scott received an invitation to the Nemacolin Woodlands Resort, Pennsylvania, to drive the 2014 Tundra and 4Runner, I was happy to learn that he was preparing for a trip to China and could not attend.

If you’ve not had the chance to attend the launch of a new vehicle, let me give you the Cliff Notes version: luxurious accommodations at the Nemacolin Chateau, trap shooting at the Field Club, gourmet dining at the Five-Star Lautrec restaurant, a private tour of a Frank Lloyd Wright designed home—basically the red carpet treatment. But we were there to drive trucks.

The 2014, or 3rd generation Tundra will hail from Toyota’s 2.2 billion dollar facility in San Antonio, Texas, which houses 21 on-site suppliers and employs a staff of 2,800. With 73 percent of components sourced in the U.S., Toyota is proud of the fact that they can honestly stamp Made in America on the Tundra.

With the current powerplant options returning strong performance and reliability records, changes to the new Tundra were subtle, focusing on ergonomics and interior options, GVW and towing capacities, brakes, and more aerodynamic bodylines. Though we were hoping for a diesel, we’ll have to wait to see what happens when Euro 6 smog regulations take affect in January, 2015.

Analogue gauges and digital readout are well presented and easy to read.

Slipping behind the wheel of a 1794 Edition CrewMax, there was no question this was a full-size truck. The feel is solid, analogue gauges and digital displays are clearly in sight, and visibility to all quadrants is good. The 381-horsepower 5.7-liter V8 leaves little to be desired, and firm handling on winding backroads confirmed that it is built for truck people (the plush leather interior, Entune Audio system, power and air conditioned seats haven’t citified the undercarriage).

Though called a half-ton, the 1794 is payload rated at a little more than 1,400 pounds (GVWR of 7,200) with a towing capacity of 9,500 pounds. While most of us don’t drag 9,500-pound trailers around, my sailboat and trailer tip the scale at 7,500, so this was of interest to me. With an 8,400-pound box trailer in tow, the truck made no excuses, and 0-60 acceleration didn’t leave me feeling like I’d be run over by a semi. Braking, on the other hand, can be unnerving with 4 tons in tow. With proper brake bias set on the trailer, I pushed the ABS to the point of engaging. The vehicle’s 4-piston calipers and 13.9-inch vented rotors dug in with purpose, holding the vehicle straight and in control.

For most overlanders, the A-TRAC system is capable of traversing any desired terrain.

Off pavement the 1794 does quite well for a long, full-size truck. Though not equipped with a locking differential, the vehicle’s A-TRAC (a form of traction control system that distributes brake bias to spinning wheels) is smooth and fairly transparent to the driver. Though I’m a big fan of Toyota’s electric locking differential, A-TRAC should be enough for most backcountry situations you would put a full-size truck in. Mounted outside the frame rails, Bilstein gas-charged mono-tube shocks have been retuned for maximum damping. The rear axle retains the hefty 10.5-inch (4.30:1 ratio) ring and pinion gears, which are standard with the 5.7-liter and tow packages.

The 1794 CrewMax sports an upgraded leather interior and ample room for three adults in the back.

The Tundra’s Entune system does more than I can list here. A few highlights are 6-in-1 touchscreen display, CD, USB/iPod connections, Bluetooth, Voice Recognition, Sirius/EX radio, and an impressive 12-speaker JBL sound system. Good for those long days on the road.

Overall, my only gripe with the Tundra is the lack of a solid, hold-in-your-hand transfer case selector (it has a citified dial). Sure, electronics these days are exceptionally reliable, but there is something about the feel of reaching down and slipping the transfer case into low range, the tactile confirmation that you are ready for some serious trail work, that can’t be replaced with a dial or button.

The name 1794 Edition is in honor of the cattle ranch, founded in 1794, that once stood on the grounds of the San Antonio, Texas, plant.

As for the 4Runner, I’m a fan. Besides my wife having put 290,000 miles on her 98 (and it was running great when we sold it), the 4Runner is one of the few in its class with true body-on-frame construction (upgraded for torsional rigidity this year). Yes, an honest ladder-box steel frame sits under all that fancy sheet metal. Does this add weight, yes. Is it more expensive to produce, yes. However, it will withstand dozens of years of Baja two-tracks or trips through the Rubicon…and still have the doors shut properly and seal dust tight. It will also take no issue contacting the occasional rock, or accepting custom modifications such as rock sliders, auxiliary fuel tanks, or full-width skid plates.

The Trail 4Runner is equipped with Toyota’s electric locking differential.

Oh yes, and did I mention the transfer case shifter. Yes, a real lever…like my old 1982 and 2002 Tacoma (there is a God). And the Trail Edition comes with an honest locking differential. Lastly, as most manufacturers move towards 20-plus-inch wheels (while city folks love the bling, 20-inch wheels have limited function off pavement), all 2014 4Runners will accept the standard 17-inch, 6-lug Toyota wheel (careful, some models are fitted with bling 20-inch wheels).

Crawl Control, while it sounds gimmicky, actually works. When engaged it actually went through a section I’d had difficulty working in manual mode.

A-TRAC, Crawl Control, and rear locker switches are mounted conveniently within reach of the driver between the visors.

Though I lean towards trail function and old-school hardware, I suppose I should mention the plethora of upgraded interior options: the Entune Audio Plus package, 8-way adjustable driver’s seat, retuned KDSS (Kinetic Dynamic Suspension System, and Toyota’s multi-position Crawl Control (which works surprisingly well, up or down hill).

Kudos to Toyota for keeping the brake calipers sized to fit a 17-inch wheel.

Toyota expects the Tundra to grab 18 percent of the half-ton full-size truck market this year. As for the 4Runner, I expect it to continue to lead the sector for those that are looking for a 300,000-mile-capable (or more), body-on-frame trail rig. And for the boot kick’n Made in America preaching full-size-truck-driving boys, Tundra has arrived…imported from Texas.

Dreaming Of Jupiter
by Ted Simon
From $13.95

Tail Bag to Adventure: Always Loaded and Ready to Go 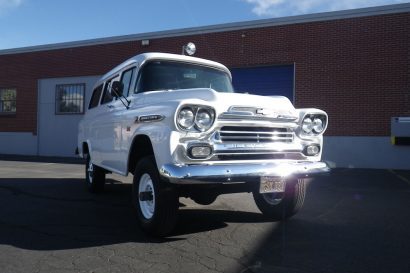 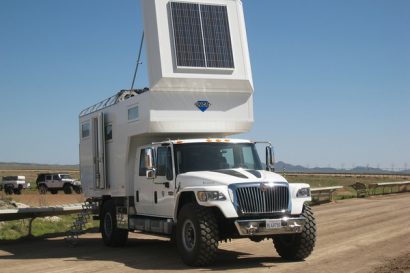 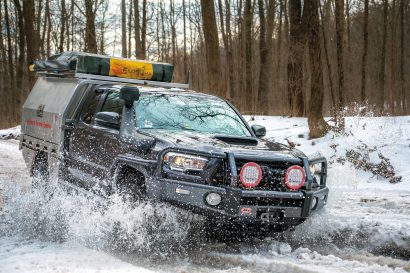