I could barely hear the Suzuki’s 650 V-twin over the rumble of the KTM 950 just behind me, drawing an immediate juxtaposition between the affordable V-Strom I was riding and the fire-breathing exotic attempting to keep pace. I was working the suspension of the Suzuki hard, over water bars and loose granite climbs of the Bradshaw Mountains. But it never complained, and more than once surprised me with its balance and ability to maintain traction. I dropped my eyeline to the spartan cockpit and summarized my impression of the Suzuki: This is an honest motorcycle.

As consumers, we are bombarded with messages and media promoting the latest luxury crossover SUV or street-biased bike claiming to deliver adventure. Most, however, are simply the appearance of capability covered in a heavy guise of buzzwords and decals. Here at Overland Journal, we make a sincere effort to feature and test genuine solutions for exploration. So when the shiny black V-Strom was delivered to the office, I raised a stern and suspicious eyebrow in its direction. Over the next two months, my gaze shifted from skeptical to optimistic, then ultimately to respect.

For this evaluation we wanted to determine if the V-Strom would be suitable for longdistance overland travel. In our experience, there are several key attributes a rider should consider in a new adventure motorcycle. The short list includes reliability, range, payload, durability, wheel diameter, and suspension performance. It would be easy to lengthen this list to the point that the bike weighs 800 pounds and costs as much as a G-Wagon, but we all know serious exploration can be done with far less. Fitted from the factory with a 19-inch front wheel, large aluminum panniers, and chassis-mounted crash bars, all for about $9,000, more-for-less is the hallmark of this V-Strom. 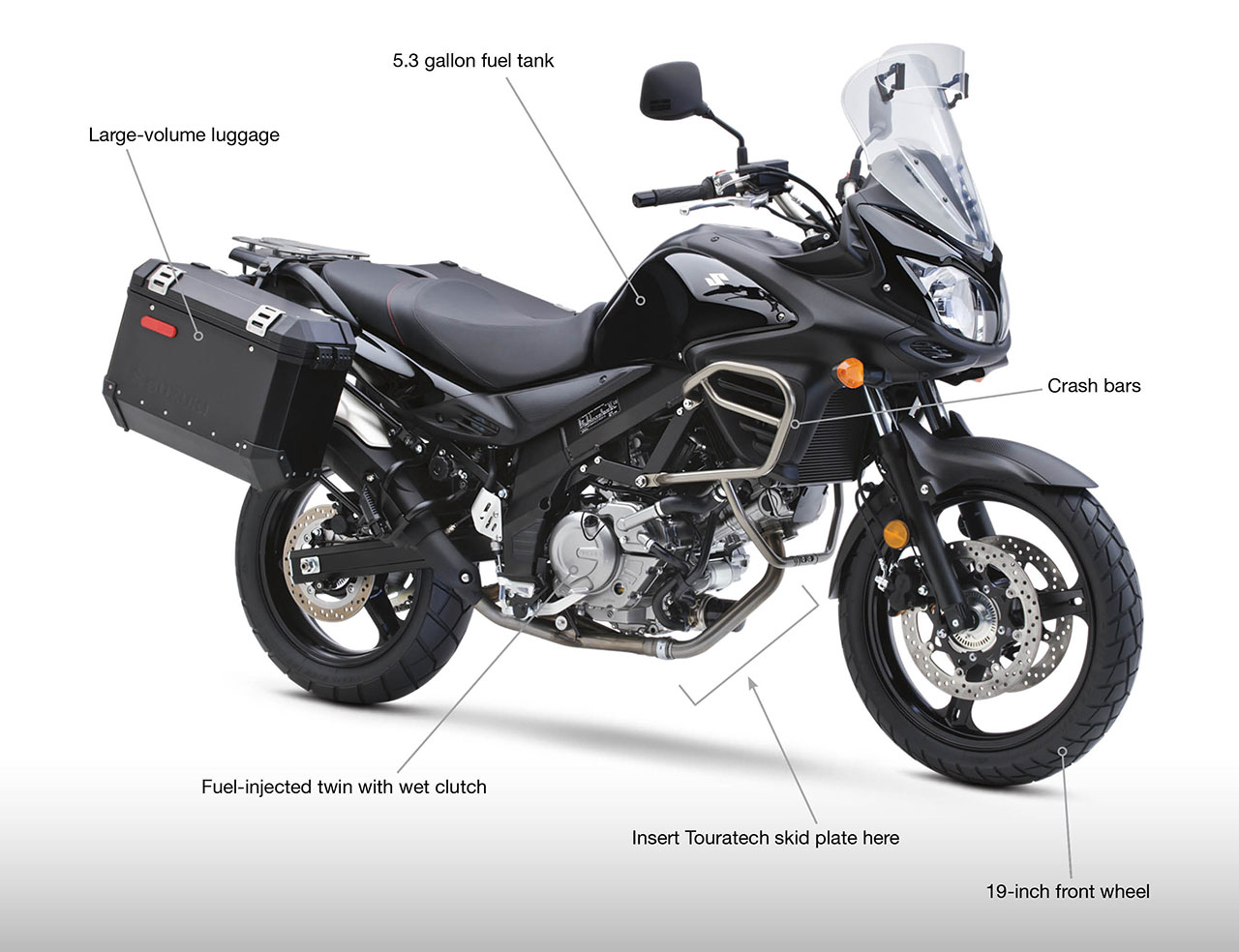 Fuel capacity is 5.3 gallons, which combined with an observed fuel economy of 51 mpg on our test track, allows for a reasonable mixed-terrain range of 250 miles. To prepare this bike for a round-the-world tour, I would only address a few items: most important being the installation of a proper skid plate to protect the large and incredibly vulnerable oil filter. The lifeblood of the engine is hanging out right in front, just asking to be crushed, punctured, or torn off. I wouldn’t even take this motorcycle on a gravel road without a skid-plate, as one good rock kicked up from the front tire could end the ride. To address this, we ordered an aluminum skidplate from Touratech. I would also install a set of hand guards and a slightly more aggressive all-terrain tire. For about $11,000, this 650 would be ready for the Silk Road—a bargain. 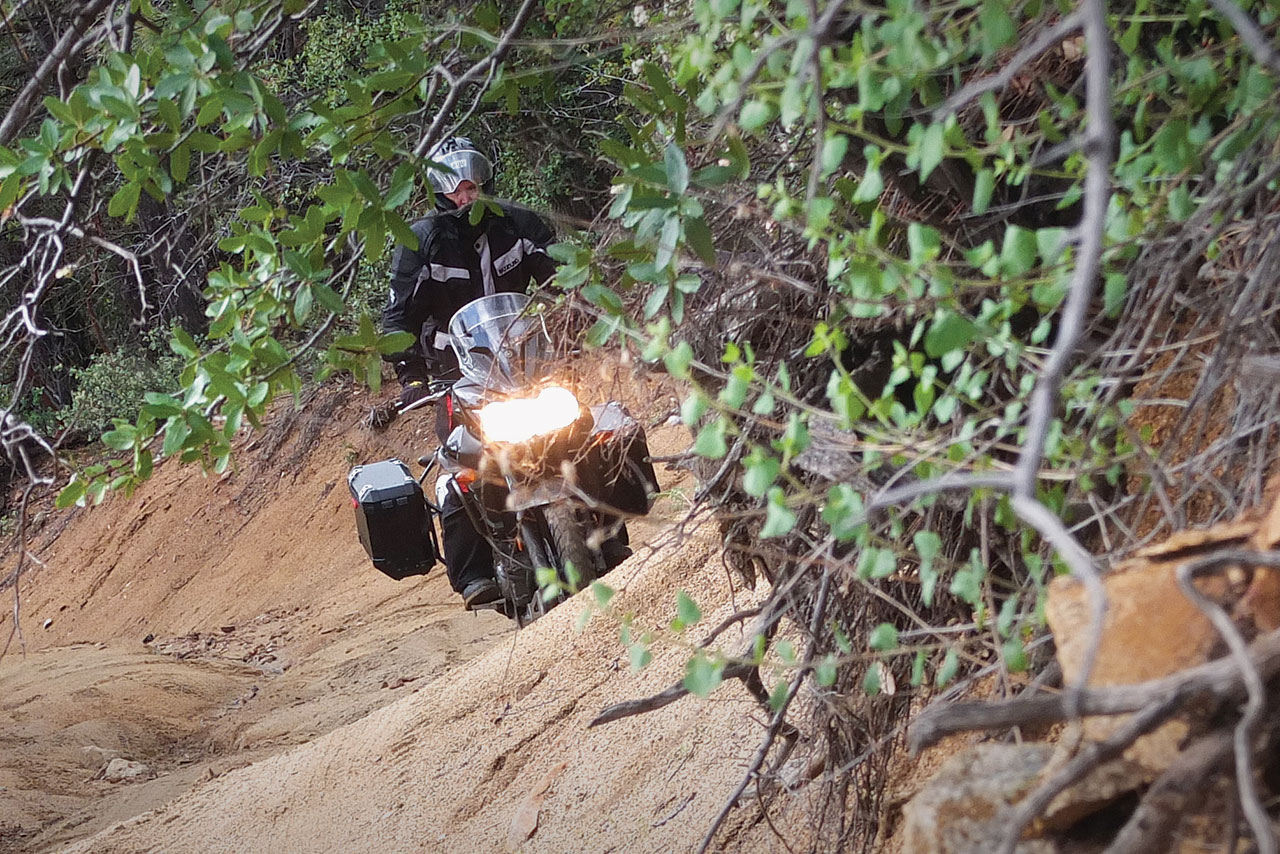 To make sure there is no confusion, I consider this 650 to be a legitimate adventure-touring bike, but not something appropriate for frequent single-track bashing. However, that didn’t stop me from testing the limits of the V-Strom’s six inches of suspension travel and seven inches of ground clearance. As mentioned, a skid-plate is mandatory, and with this being our only modification, we rode the Strom on hundreds of miles of dirt ranging from fast gravel roads to tight, technical single-tracks. Though suspension travel is quite limited, the bike makes good use of what is available. It does mean, however, the pace needs to slow considerably. With the lower ground clearance, care needs to be taken over rocks and ledges. Fortunately, the throttle and wet clutch offer good modulation to control wheel spin and traction. The motorcycle is low and well balanced, permitting the rider to navigate obstacles with less speed than would be required on a longer-travel option. On our test track, I never dropped the bike and never got stuck. Overall, the 650 Adventure is limited in loose, technical terrain, but fared better than expected.

The 650 cc fuel-injected twin produces 67 hp, and it feels every bit that much upon the twist of the throttle. Performance is particularly impressive when compared against other 650s like the DR650 and XR650L, both thumpers producing around 40 hp. On the highway, the bike is adequate for speed limit travel, but lacks the punch needed to pass quickly on the interstate. The seat is certainly more comfortable than my KTM, but gives up quite a bit to the BMWs and Triumphs for saddle time: I would call it a 3-hour seat.

The windscreen is tall and limits buffeting and wind noise; definitely as good as others in this category. The brakes are also adequate, reflecting the modest price point and intended use, but they tend to fade with hard play. I found the motorcycle to be fun on the twisty routes near our office in Prescott, AZ, daring me to carve a little deeper and brake a little later than I would on a more dirt-biased platform. On the road, the V-Strom really delivers as a sport enduro and I would recommend it as a solid choice for a daily commuter or weekend adventurer. 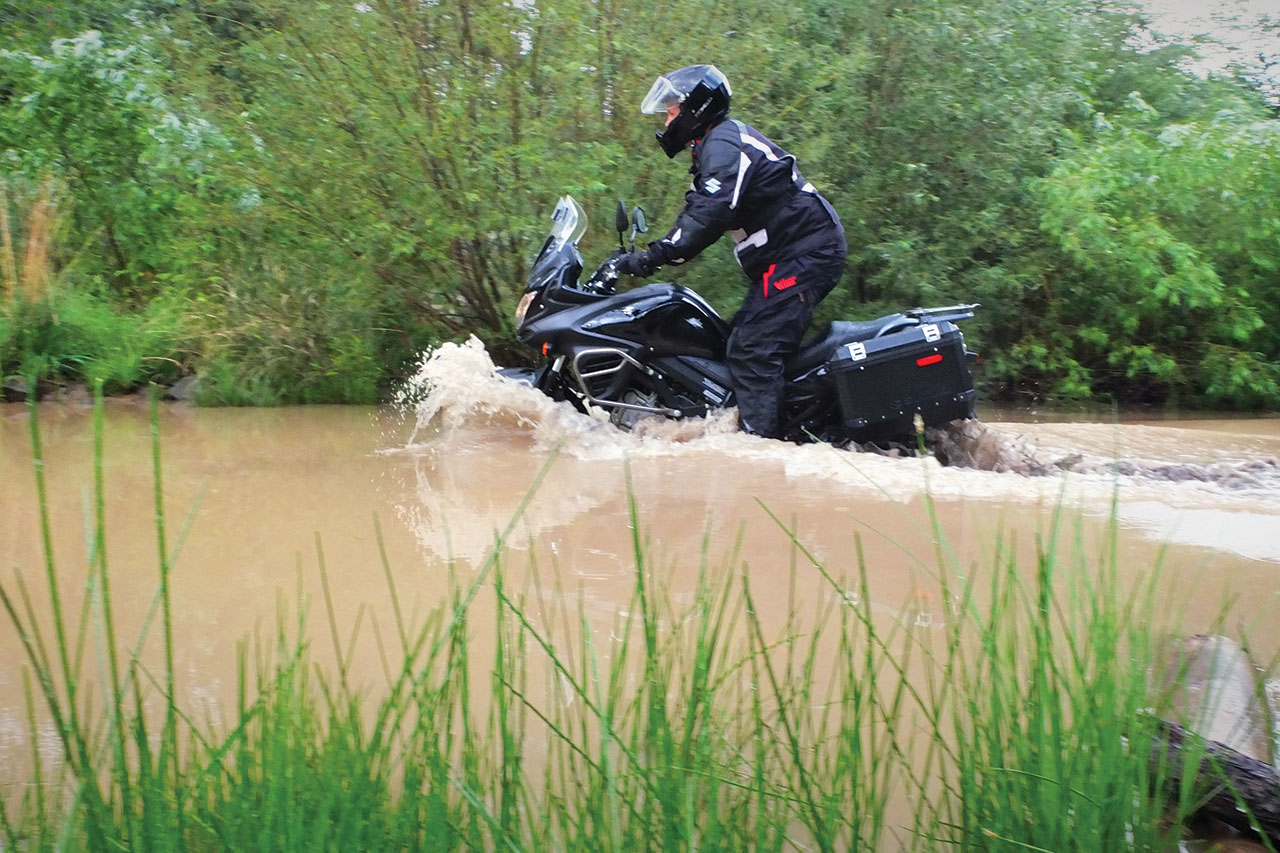 There was one moment on this test when everything good and notable about this valuepacked V-Strom became clear. It involved a 60-foot-long, 18-inch-deep water crossing on a local river, swollen from a steady morning rain—it looked way too deep and the bottom way too rocky for a heavily street-biased adventure bike. I rose up on the pegs, shifted my weight rearward, and dropped the front end into the soupy mess. Water covered the front tire and pressed against my boots. Feathering the clutch and feeding the throttle, the Suzuki clawed for traction, spinning the rear tire slightly but tracking straight towards the opposite bank. The bow wake pushed far ahead, and despite the water’s current and resistance, I continued forward, ultimately bouncing up the rocky slope and coming to a stop just behind the big KTM. I reached down, patted the Suzuki on the tank, and said, “Well done little V-Strom, you have certainly earned the name Adventure.”

Then and Now: The Classic Jeep 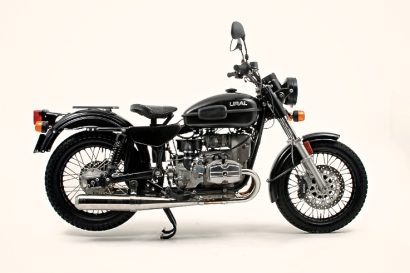 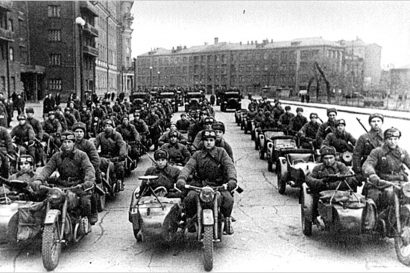 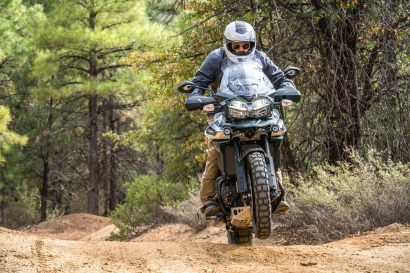