Georgia—not the American state Ray Charles and Martin Luther King hailed from, but the little-known country located at the crossroads of Asia and Europe—is a mountainous place of wild and astonishing beauty. Monasteries, watchtowers, and fortresses dating to the Middle Ages stand sentinel over picturesque valleys, silent witnesses to its tumultuous past. Surrounded by the snow-capped peaks of the Greater Caucasus and lying on the coast of the Black Sea, the country is a must-see destination on the Silk Road and a paradise for any adventure-seeking traveler.

We left Central Asia and entered Georgia with a clear goal in mind, to create a collection of the best off-pavement routes for independent travelers by motorbike, 4WD, van, or bike for our next book. Our expedition vehicles were purchased in the capital of Tbilisi: a Mitsubishi Pajero, along with a Yamaha Tenere XTC 660 and a Royal Enfield Himalayan, two perfect bikes for mountain trails and long-distance travel.

Our five-month expedition started in one of the most remote territories of Georgia: Tusheti. This mythical land, nestled in the eastern Greater Caucasus, can only be reached by a long, poorly maintained track. Inaccessible in winter and covered by impassable fortresses, Tusheti’s border is considered to be the best-protected border of the Georgian domain, and the access road is one of the most majestic and dangerous roads in the world. As the region’s inhabitants were forced to leave their villages in the 1950s under Soviet pressure, many have fallen into ruin. But nowadays, the meadows of the Caucasus come back to life every spring when the last of the nomadic shepherds invade with their huge herds of sheep.

We set off on this legendary track with both caution and excitement, traversing through lush forests which gave way to gorges and canyons carved by raging torrents. At first, the ascent was not very difficult, except that we had to drive carefully and not be afraid of getting wet. Indeed, huge waterfalls were flooding the track. After four hours of climbing, the valley widened, and the trees were replaced by meadows covered with pink, white, and yellow wildflowers, adding to the magical atmosphere. We followed an endless series of tight hairpins until we reached the Abano Pass (2,826 meters), where we decided to camp for the night. The breathtaking views made us forget the cold temperatures.

Our exploration then continued in the far southeastern part of the country, along the border with Azerbaijan. From the desert steppes to the Iori River, you’ll find landscapes peppered by swarms of birds flying overhead while wolves and jackals howl in chorus at night. At the bend of a dirt track, we discovered deep canyons, savannahs dotted with hundred-year-old pistachio trees, and arid steppes where gazelles grazed peacefully. Only 20 years ago, the rare Persian leopard could be spotted in the park Vashlovani, but no more. Jackals and wolves roam freely in this fascinating and hostile wilderness amongst thousand-year-old troglodyte monasteries dug into the rock and a few brave shepherds.

After a summer rich in emotion and discovery, our journey came to an end with the first snow of November on the volcanic plateau of Javakheti. After the slightest rainfall, the dirt tracks turned into abominable quagmires, but nothing could stop us. Punctuated by extinct volcanoes and sparkling lakes, the area’s allure hides the harsh climate and the rough living conditions the inhabitants endure. Despite this, the hospitality of the people is unmatched, especially in the countryside, where they warmed us up with their delicious homemade wine and gargantuan dinners. Georgia has much to offer and much more to return for; it’s truly an overlander’s Eden. 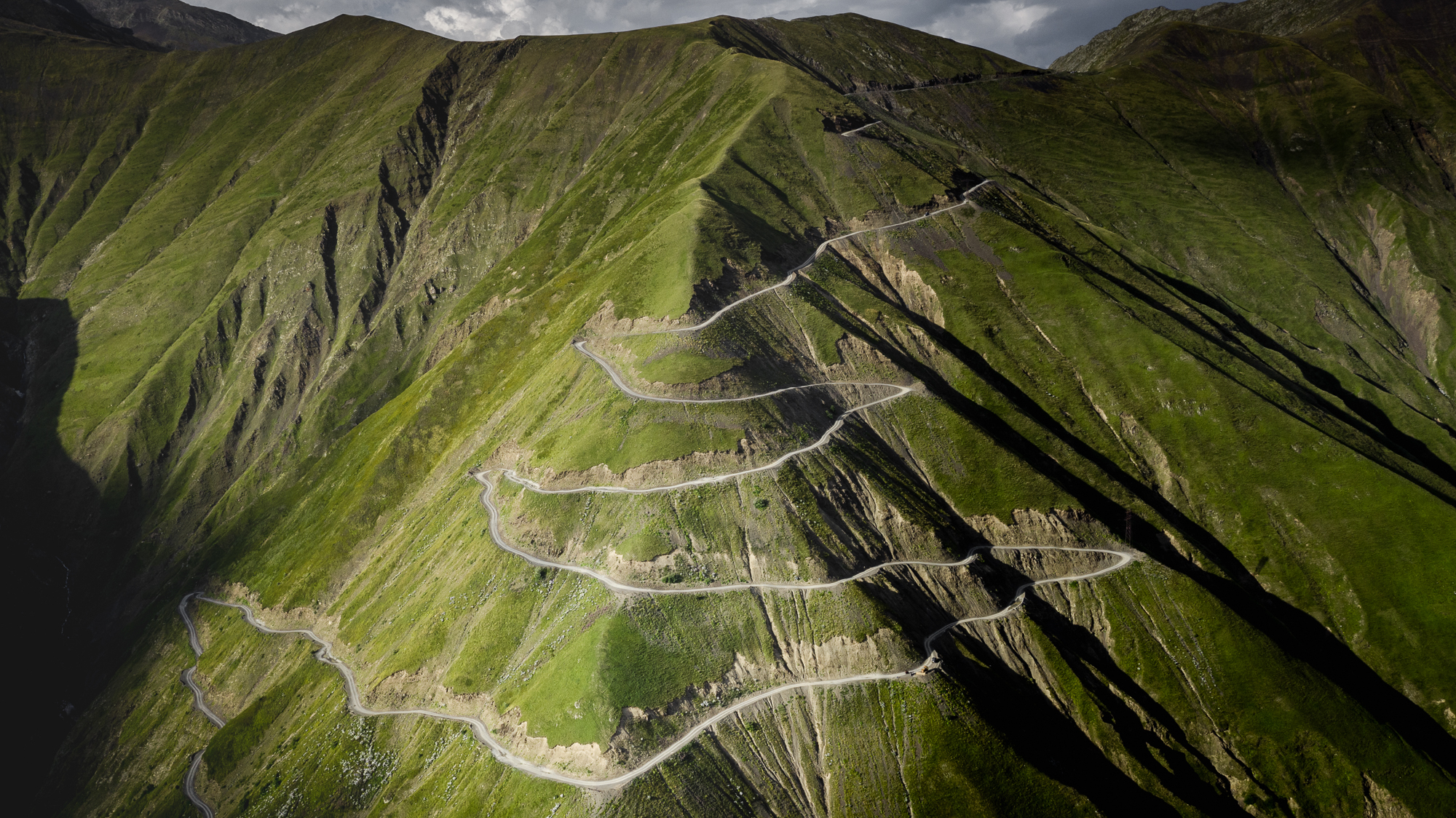 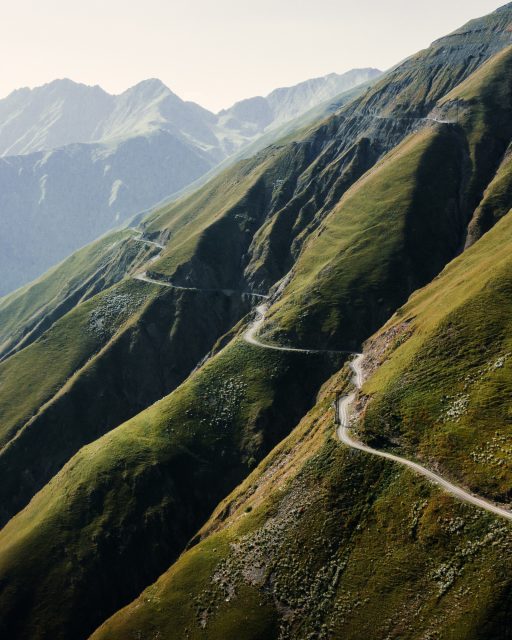 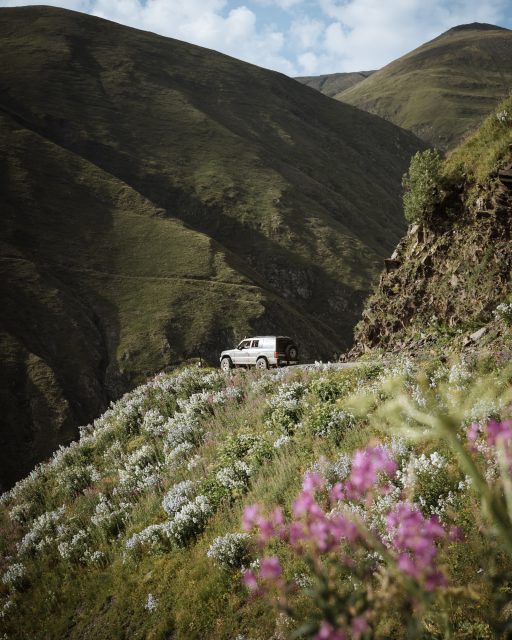 Top: Gradually, the Tusheti track ascends to Abano Pass, where you will be treated to staggering panoramic views of the Greater Caucasus. This line of travel resembles a crudely drawn Etch A Sketch creation, deliberate in intent yet slightly unfathomable. Bottom left: A series of hairpin bends in the road hugs the mountain as if they belong there. Bottom right: Eventually, the track leaves the forest behind and leads to a fairyland of alpine meadows dusted with wildflowers. 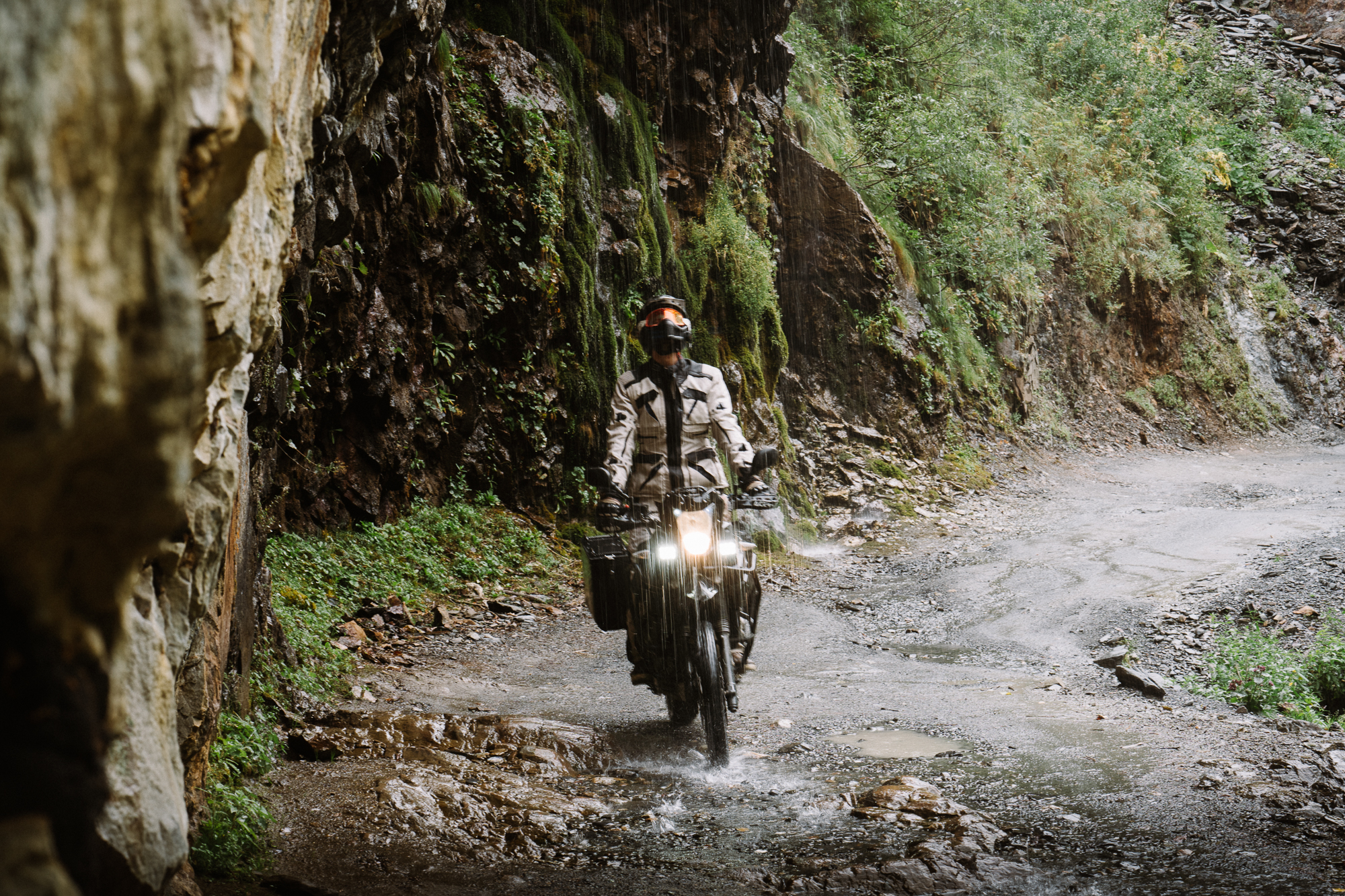 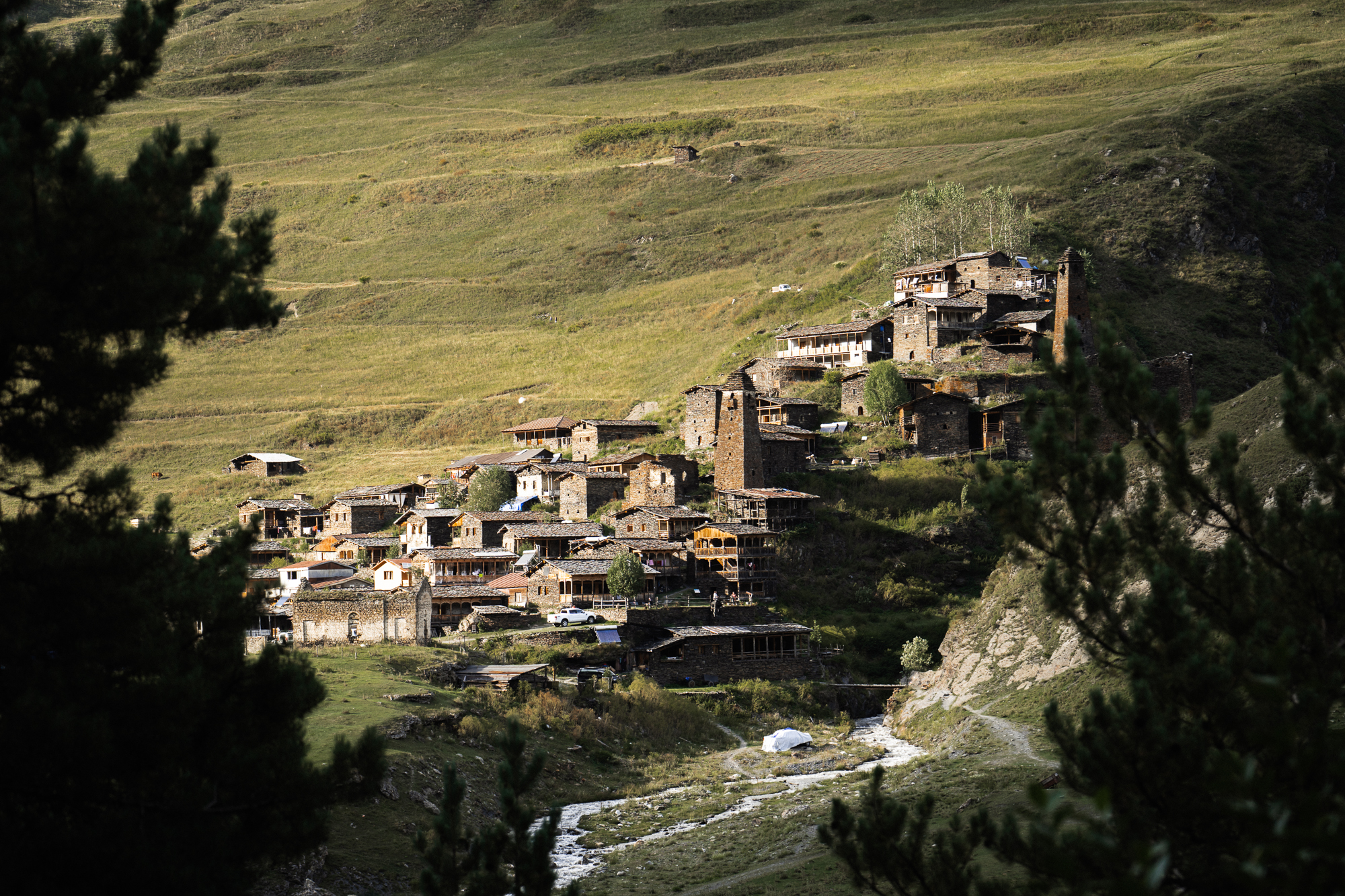 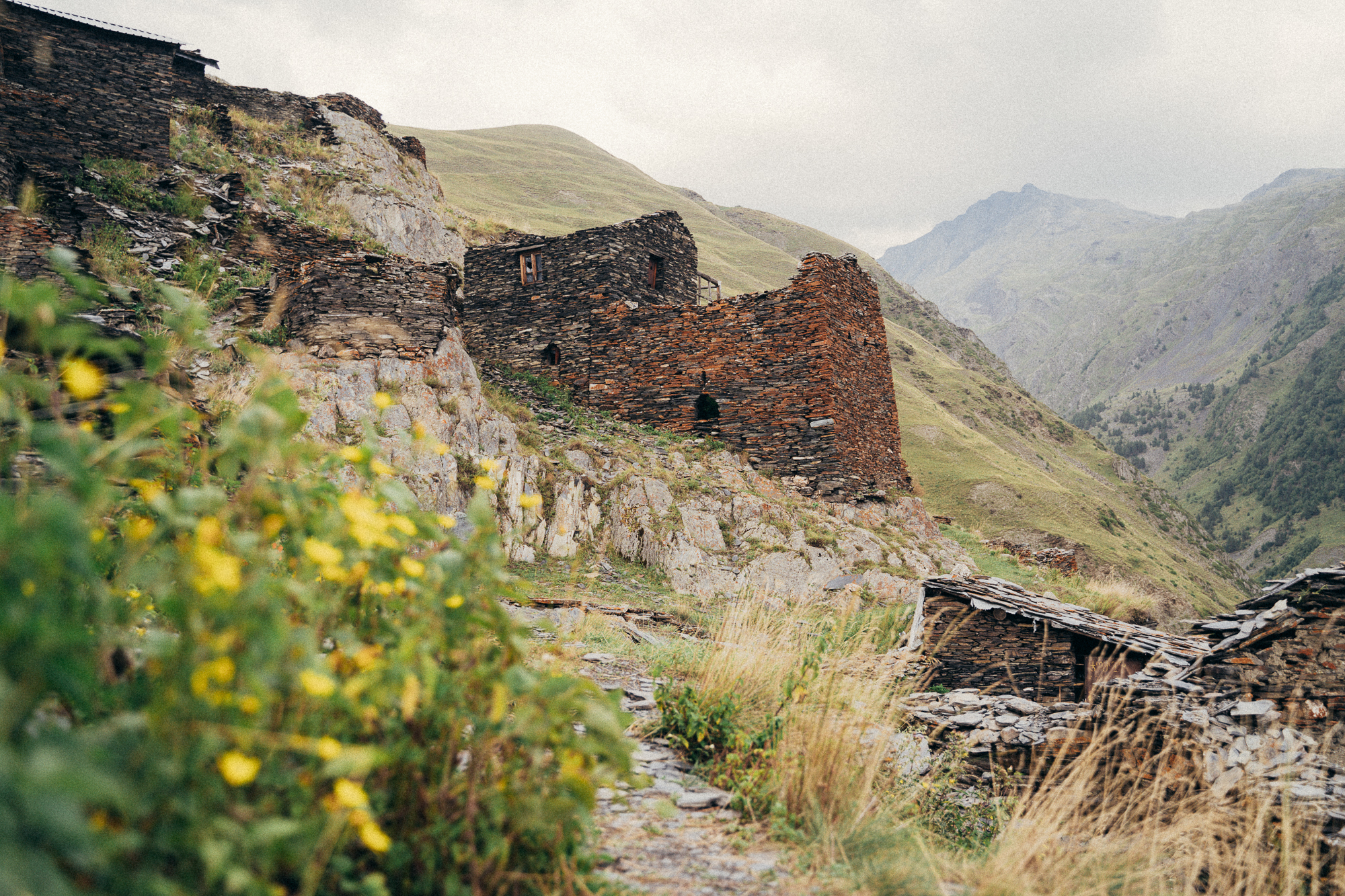 Top: Waterfalls often flood the roads; it’s wise to be wary of the resulting little streams and puddles that may dance in your way. Bottom left: Clinging to the mountain at 2,000 meters, Dartlo is undoubtedly one of Georgia’s most beautiful villages. It sets itself apart thanks to its vernacular architecture, characterized by slate roofs, fearsome defense towers, and charming sculpted wood balconies. Bottom right: A walk through any of the villages in the region will transport you step by step down narrow lanes to years past. Here, we see a few petroglyphs hidden amongst the ruins. 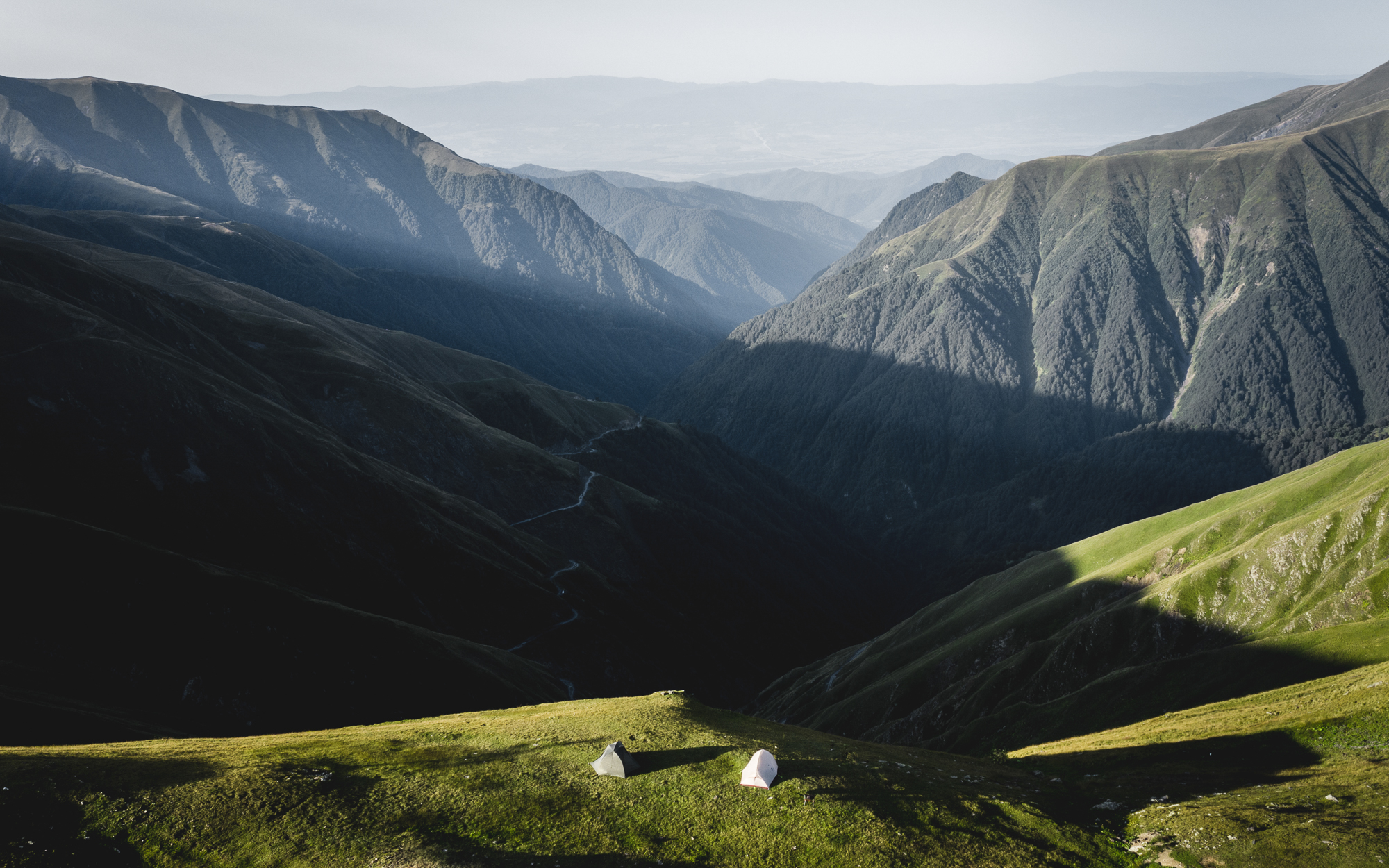 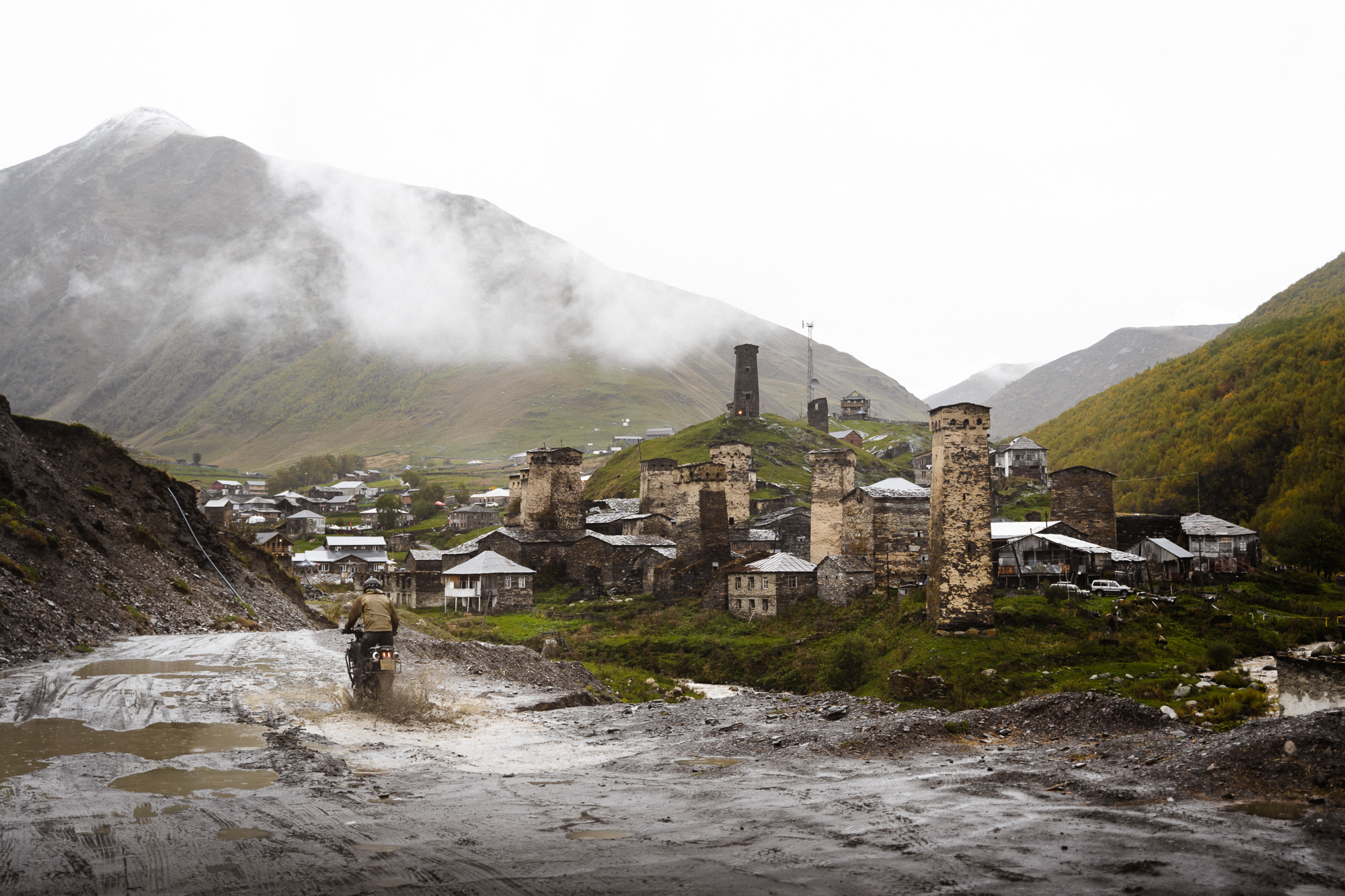 Top: Dense green terrain stretches as far as the eye can see, with the sun’s golden rays highlighting the mountains’ endless nooks and crannies. Bottom: Inclement weather brings a risk of landslides along with fog that can dull and obscure the landscape with its mask of gloom. 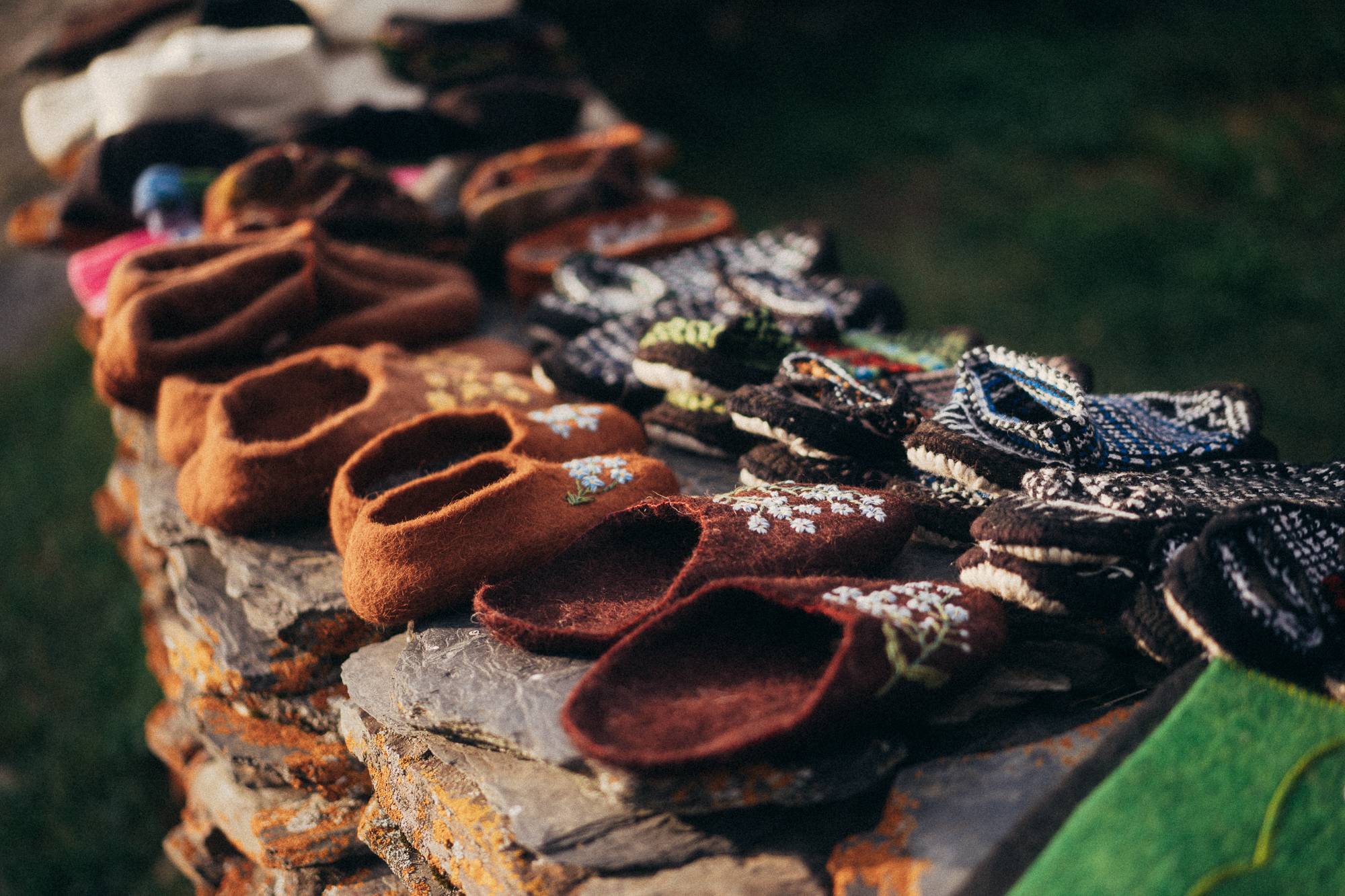 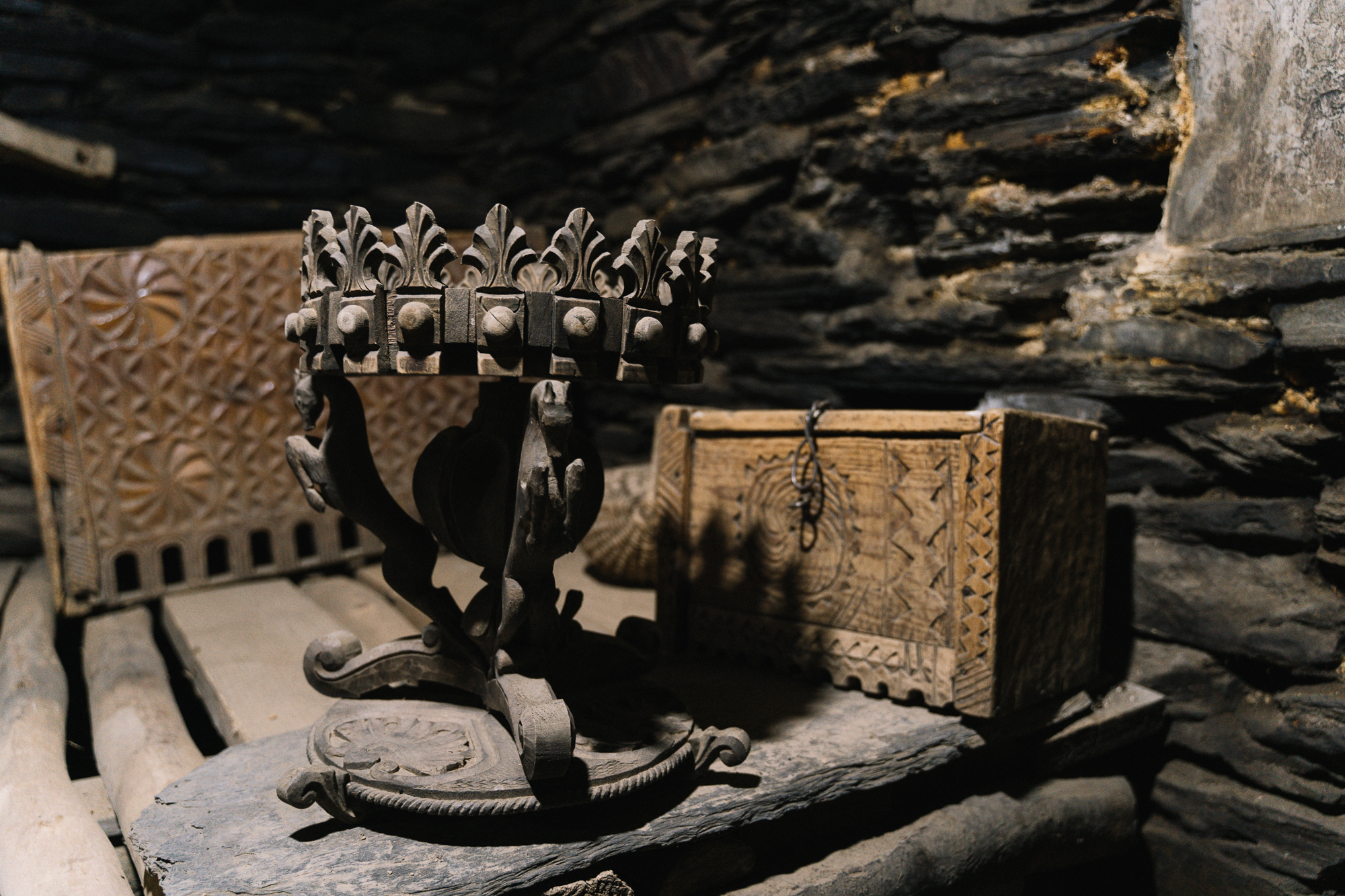 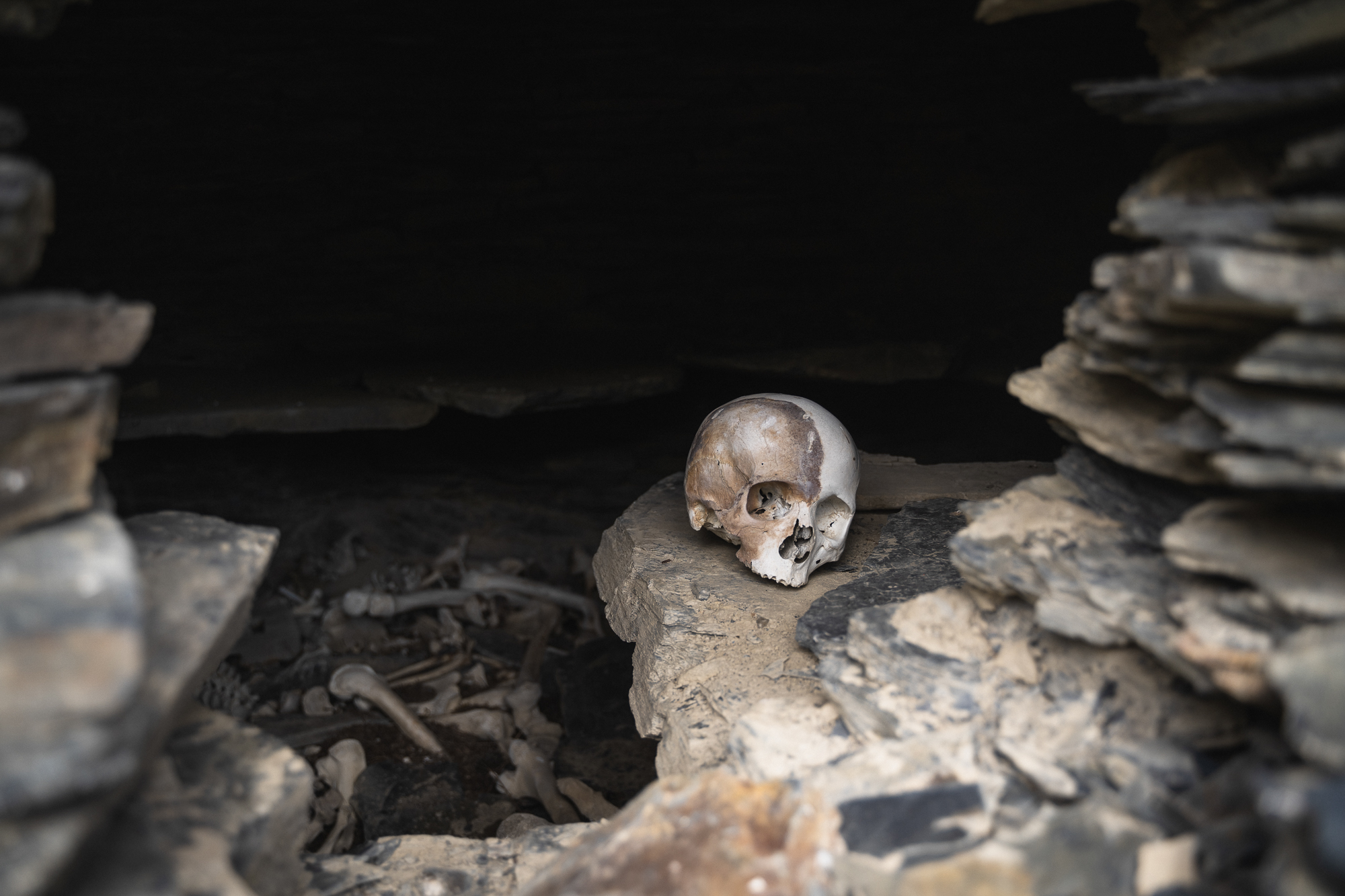 Left: In the villages, women sell hand-knit wool socks and slippers, a useful purchase to survive the chilly nights in the mountains. Middle: In the houses of Ushguli, the carved wooden furniture, old tools, weaving loom, and traditional clothing will immediately transport you to the Middle Ages. Right: The burial crypts of Anatori at Khevsureti are considered sacred. When the plague (zhami) spread through the region, crypts were built in advance for people to voluntarily retire to once they became ill to protect the rest of the village. Archaeological digs unearthed wooden utensils, jewels, arrow tips, and silver coins. The tombs have since been pillaged and now stand empty, save for their human remains. 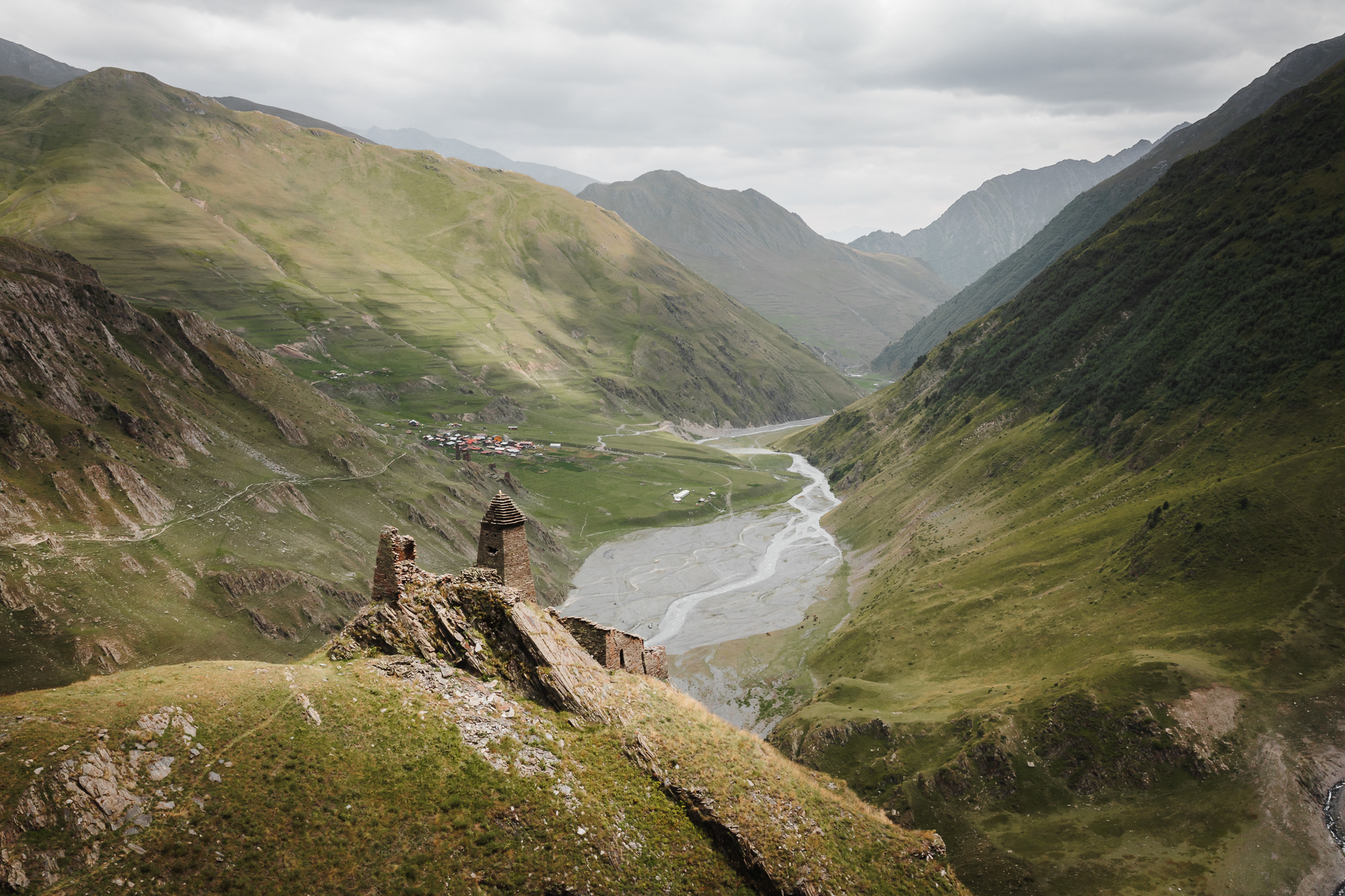 Right next to Mount Shkhara lies the picturesque village of Ushguli, preserved in a medieval time capsule due to its relative inaccessibility. It’s also the last populated hamlet in Upper Svaneti before the eternally snowy peaks rise to separate Georgia from Russia. 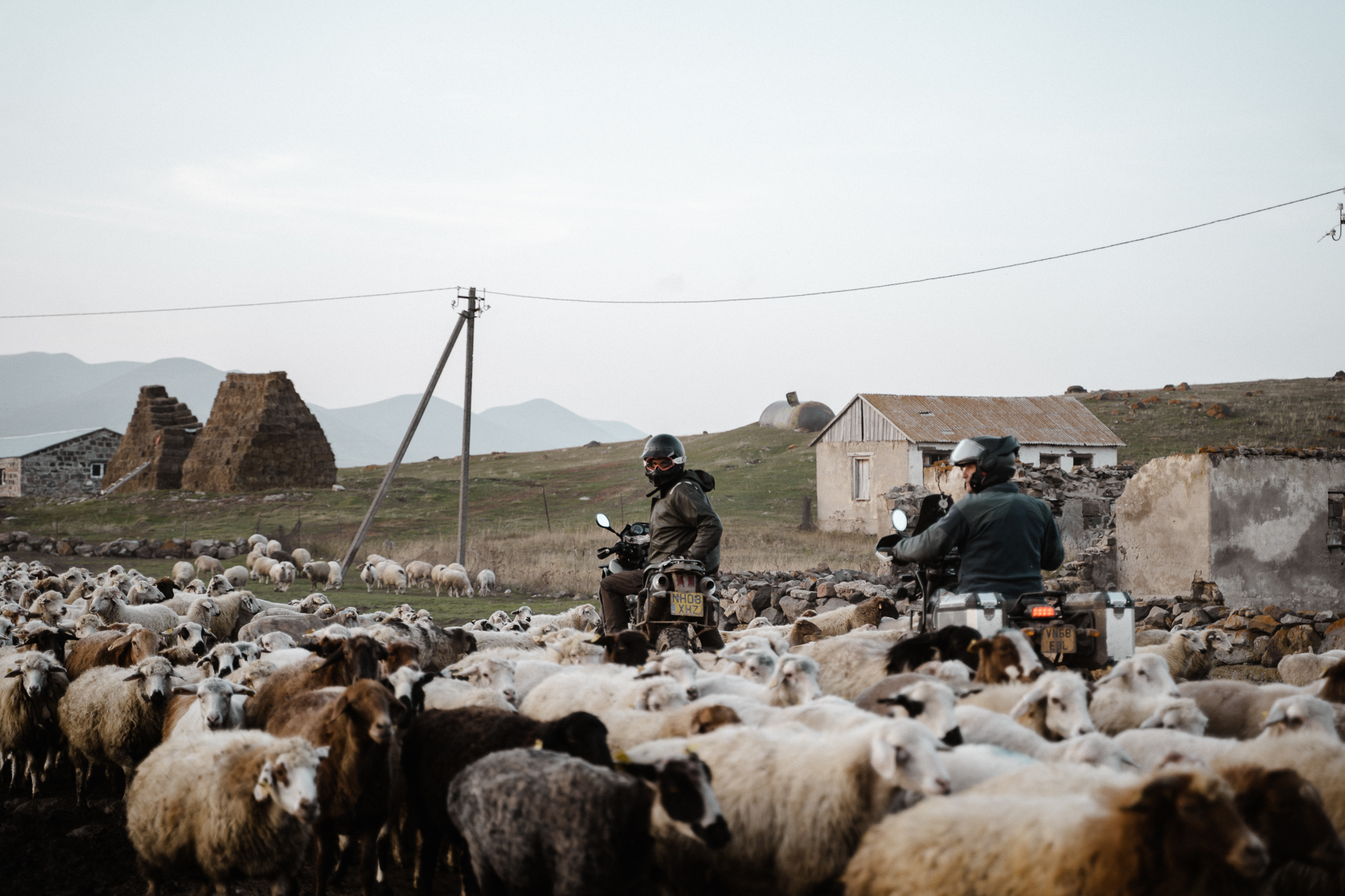 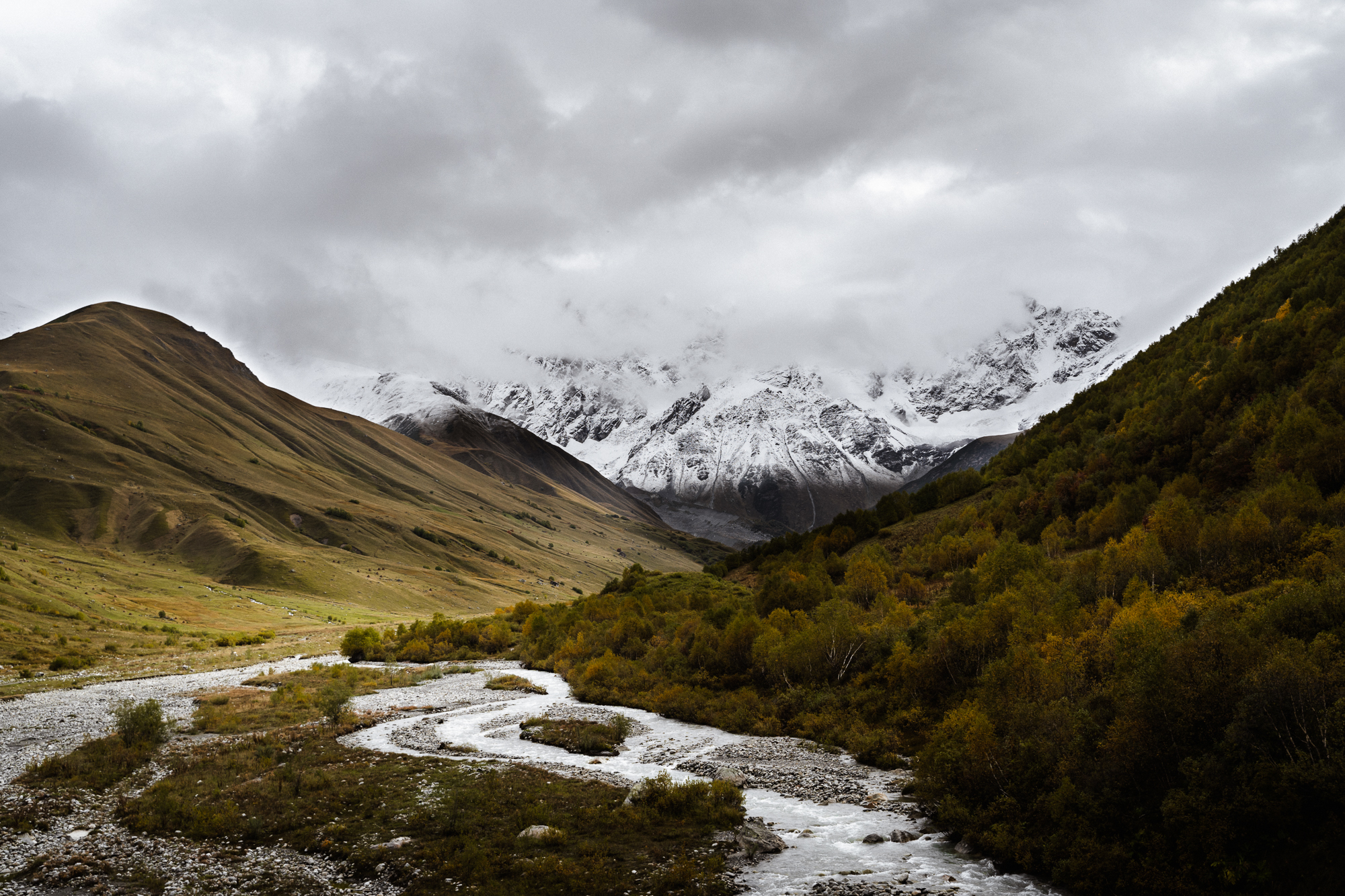 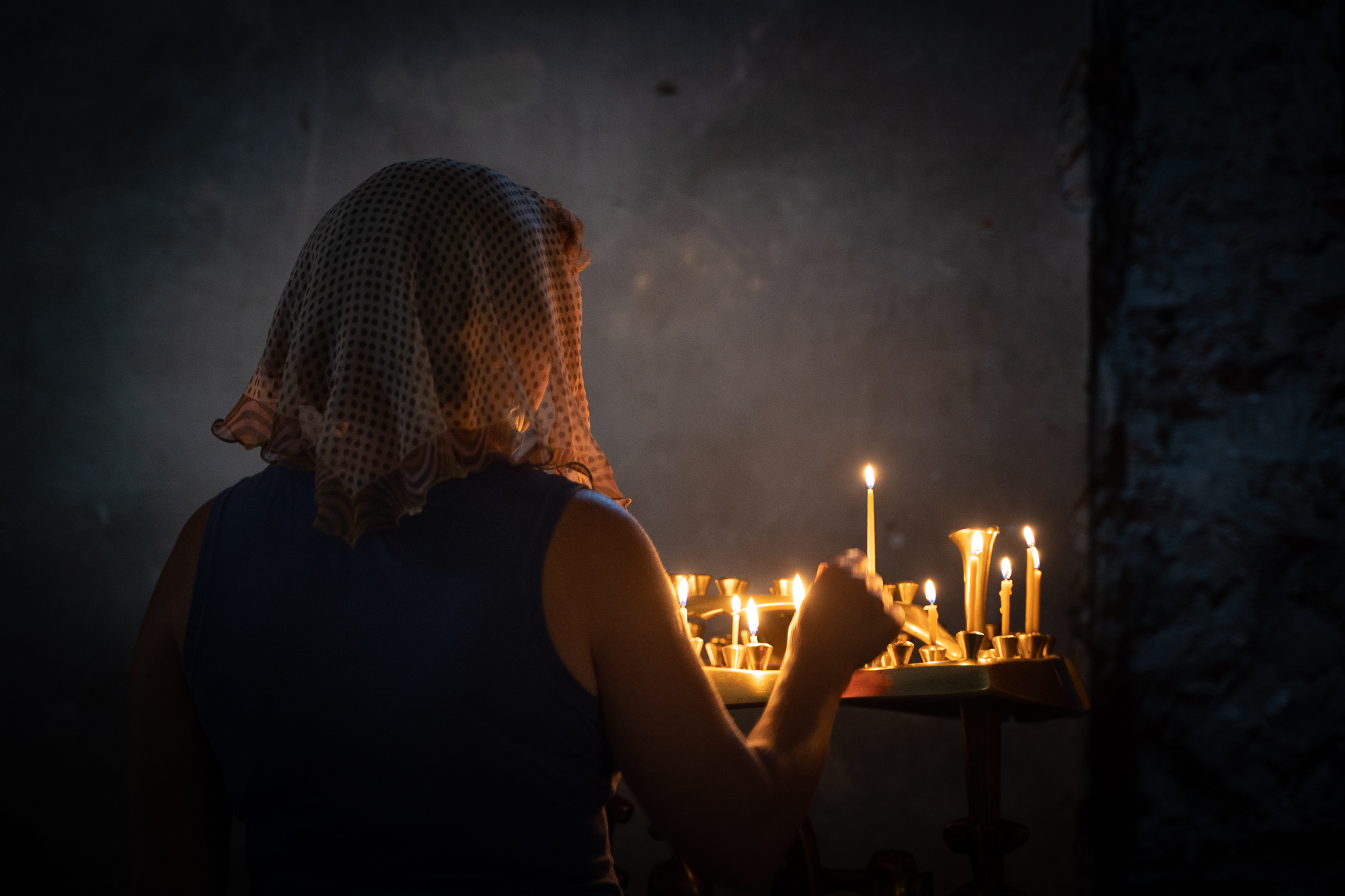 Top: During the transhumance, we sometimes had to stop our motorbikes to let huge herds of livestock pass. It’s much like waiting for a long train, except you are witness to a sea of movement driven by tradition. Bottom left: This route leads to the foot of the northern face of Mount Shkhara, the highest peak in Georgia at 5,068 meters. If the sky is clear, you will be able to see the mountain’s jagged ridges and the glacier from the track. Even when engulfed in clouds, it is spectacularly breathtaking. Bottom right: Since Georgia’s independence from the Soviet Union in 1991, the Georgian Orthodox Church has started to flourish once again. 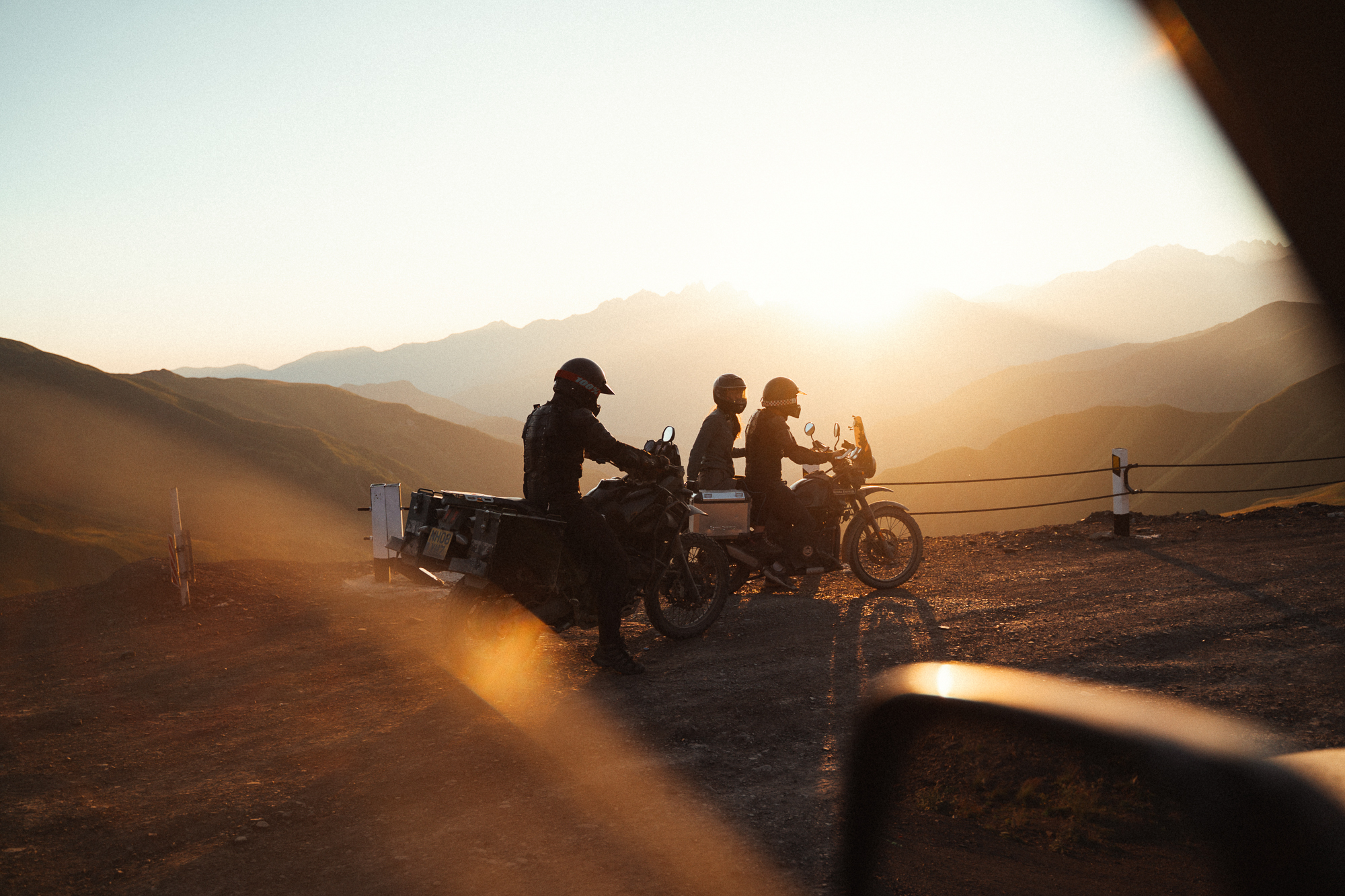 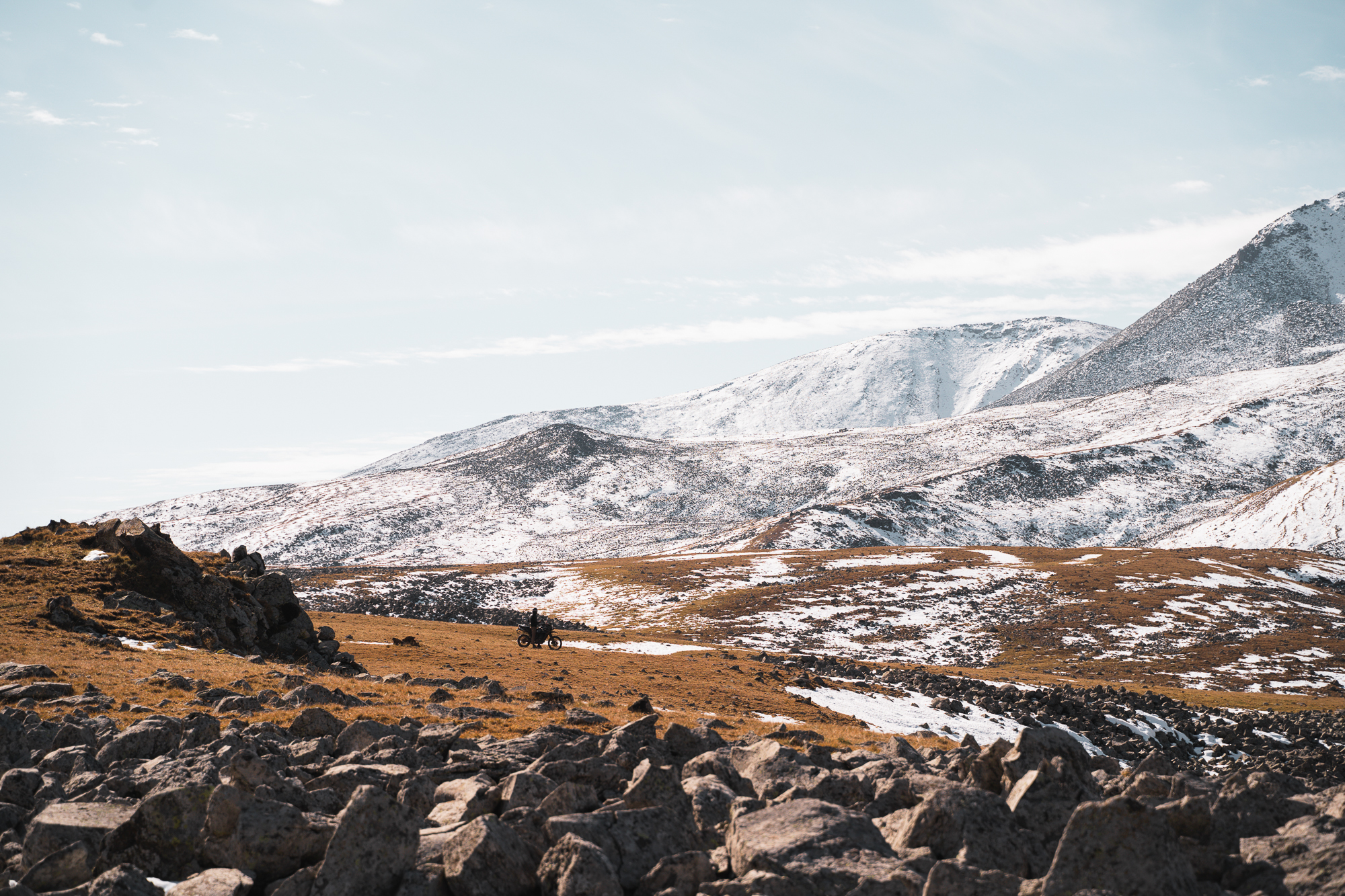 Top: We rode until nightfall, hypnotized by the last glimmers of sunlight on the mountains. Bottom: In October, the first snow sprinkles the sunburnt grass of the Caucasus Mountains. 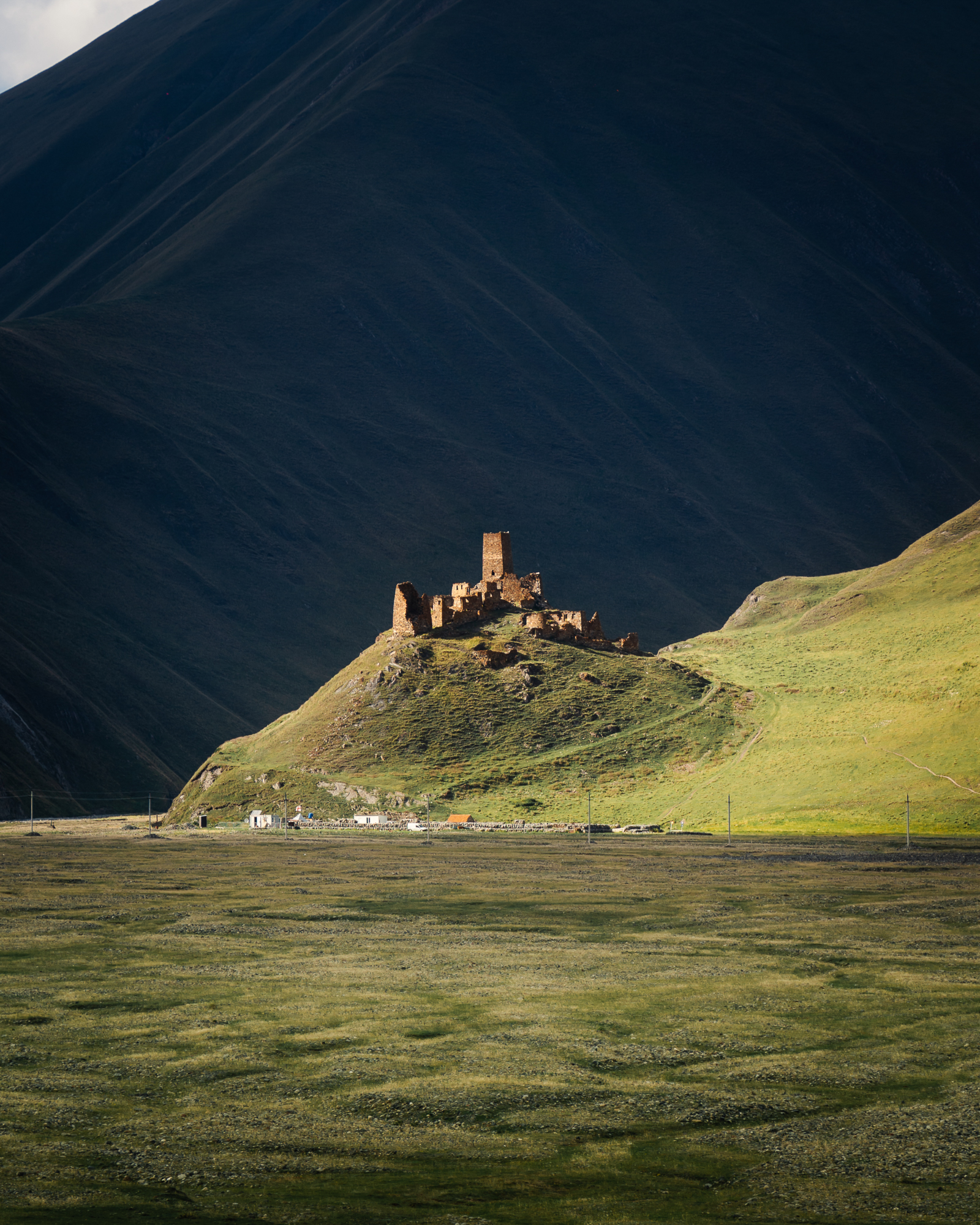 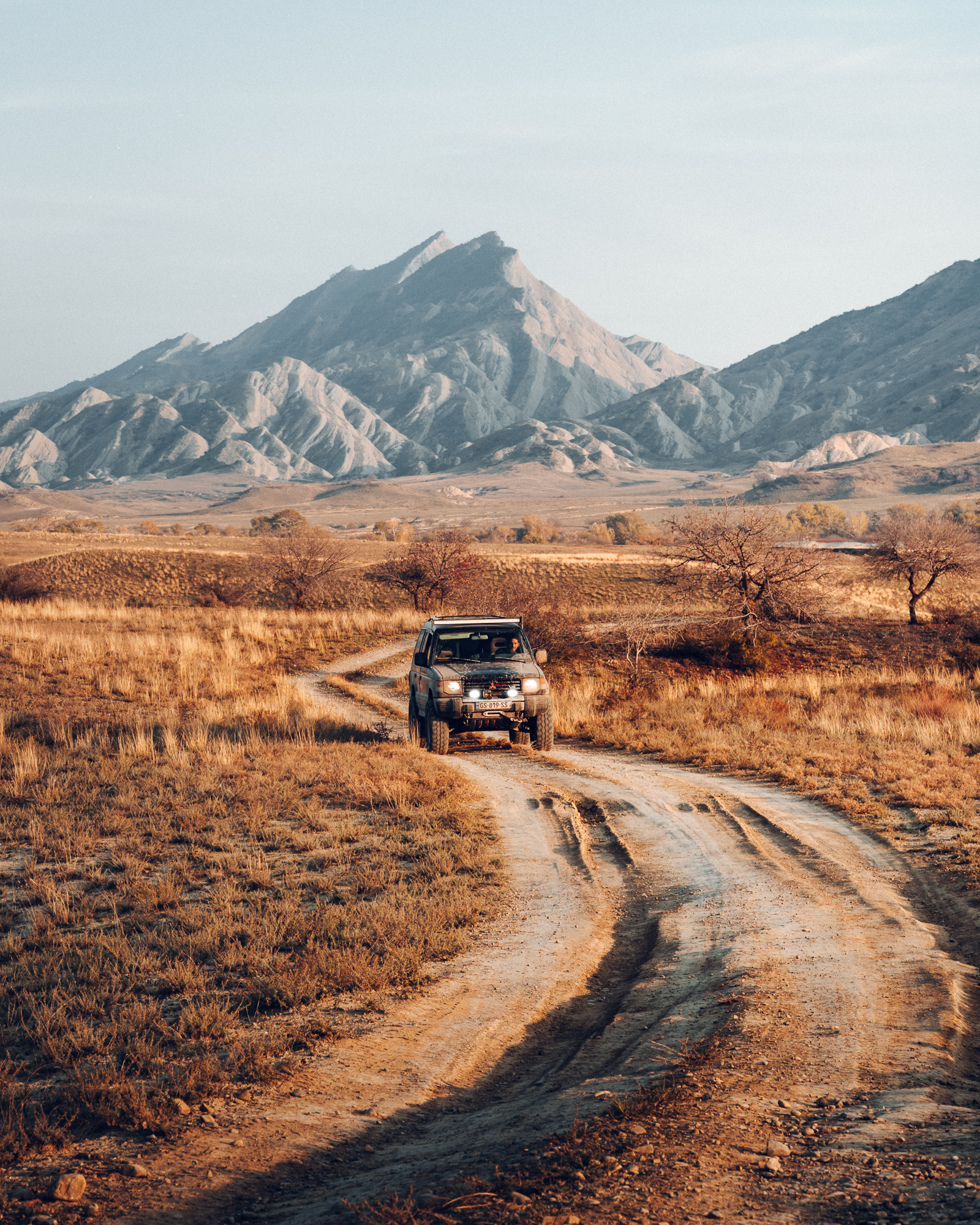 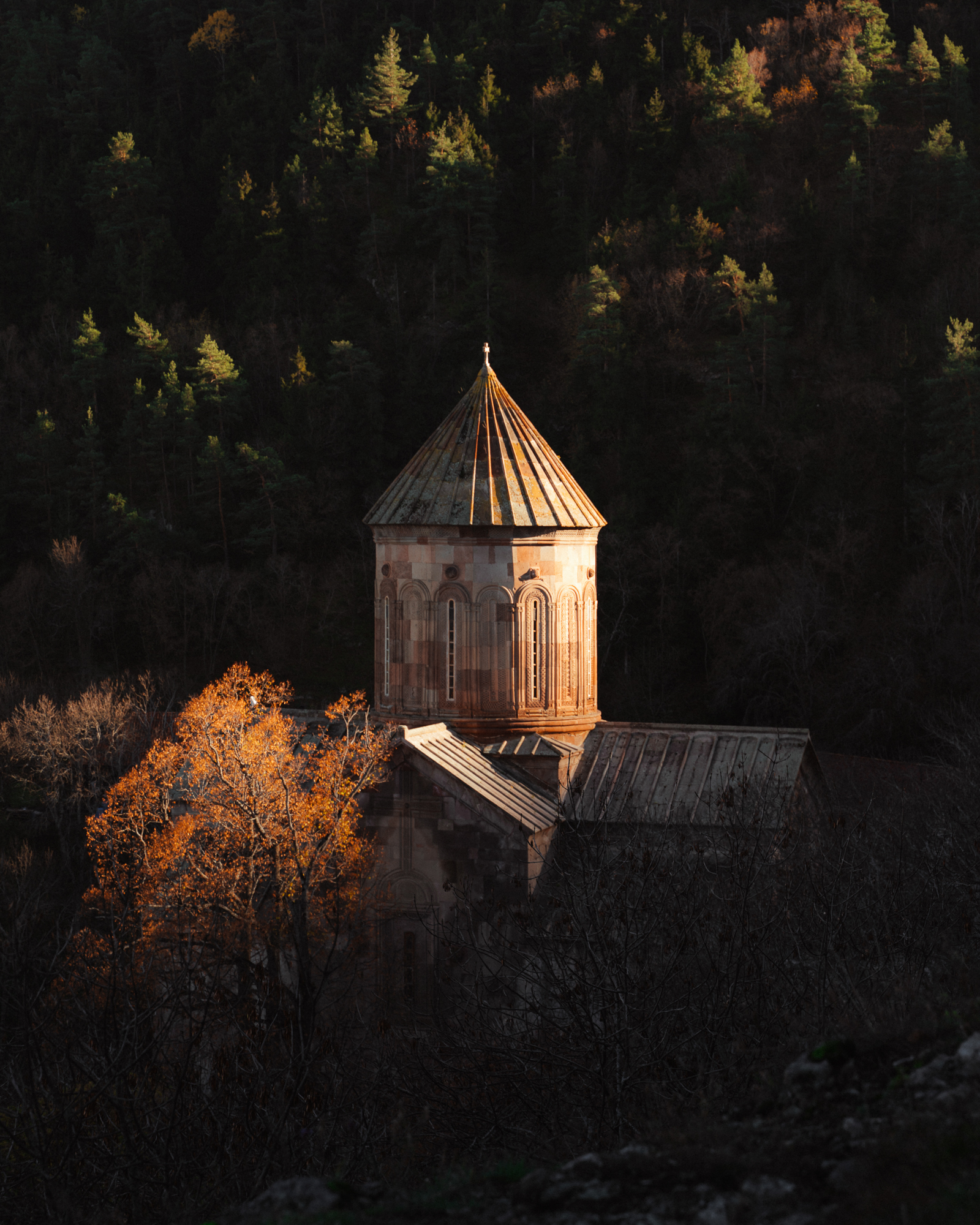 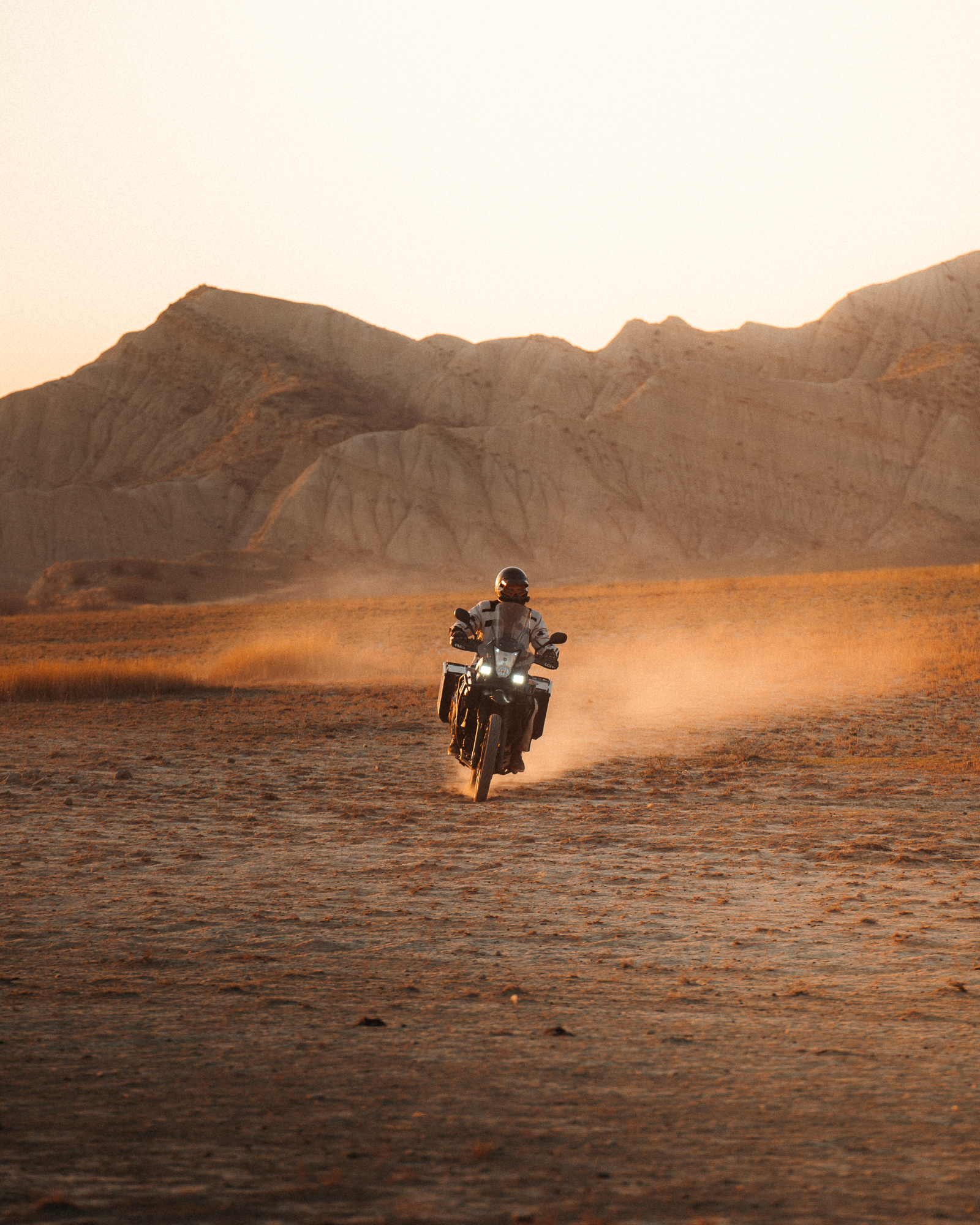 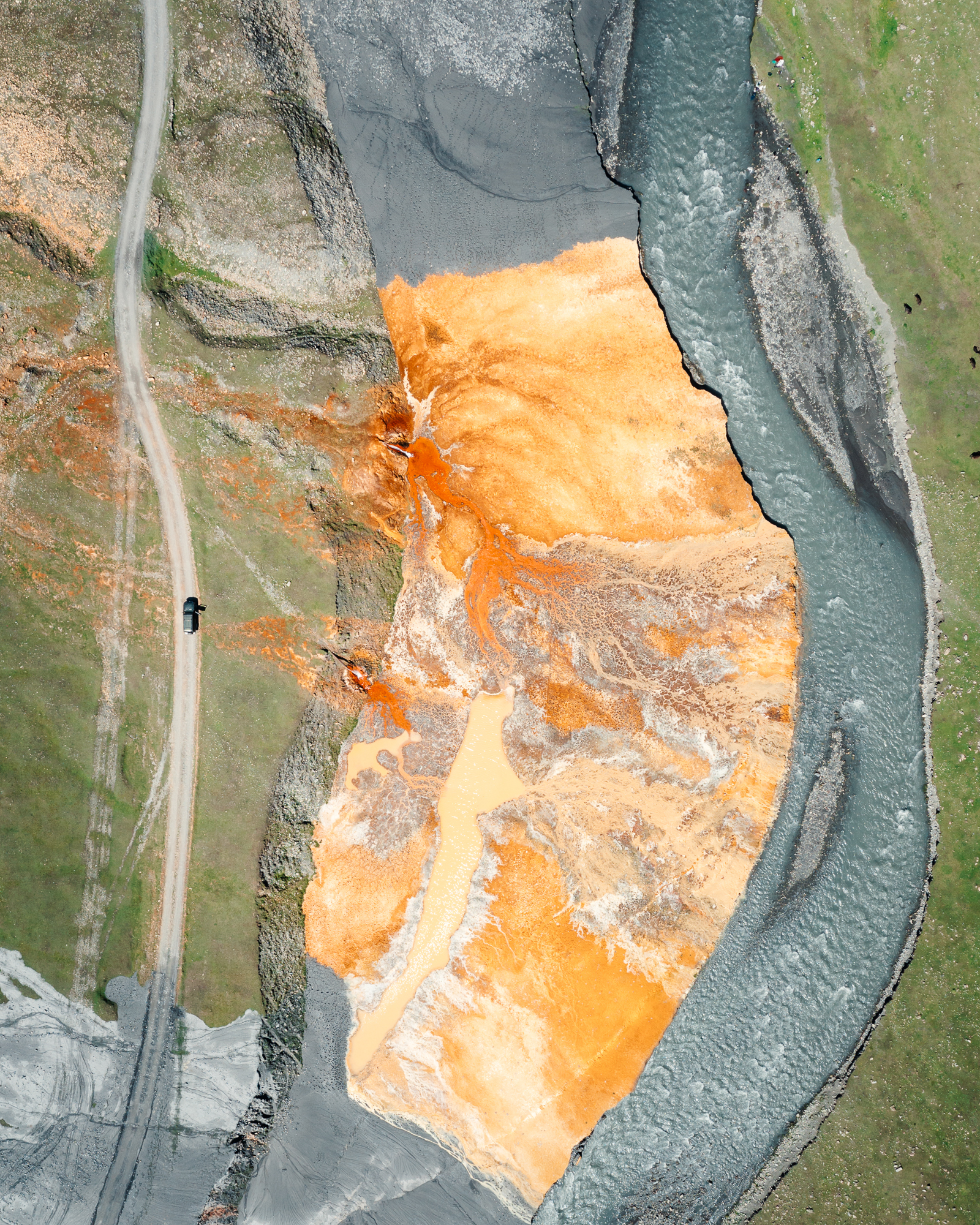 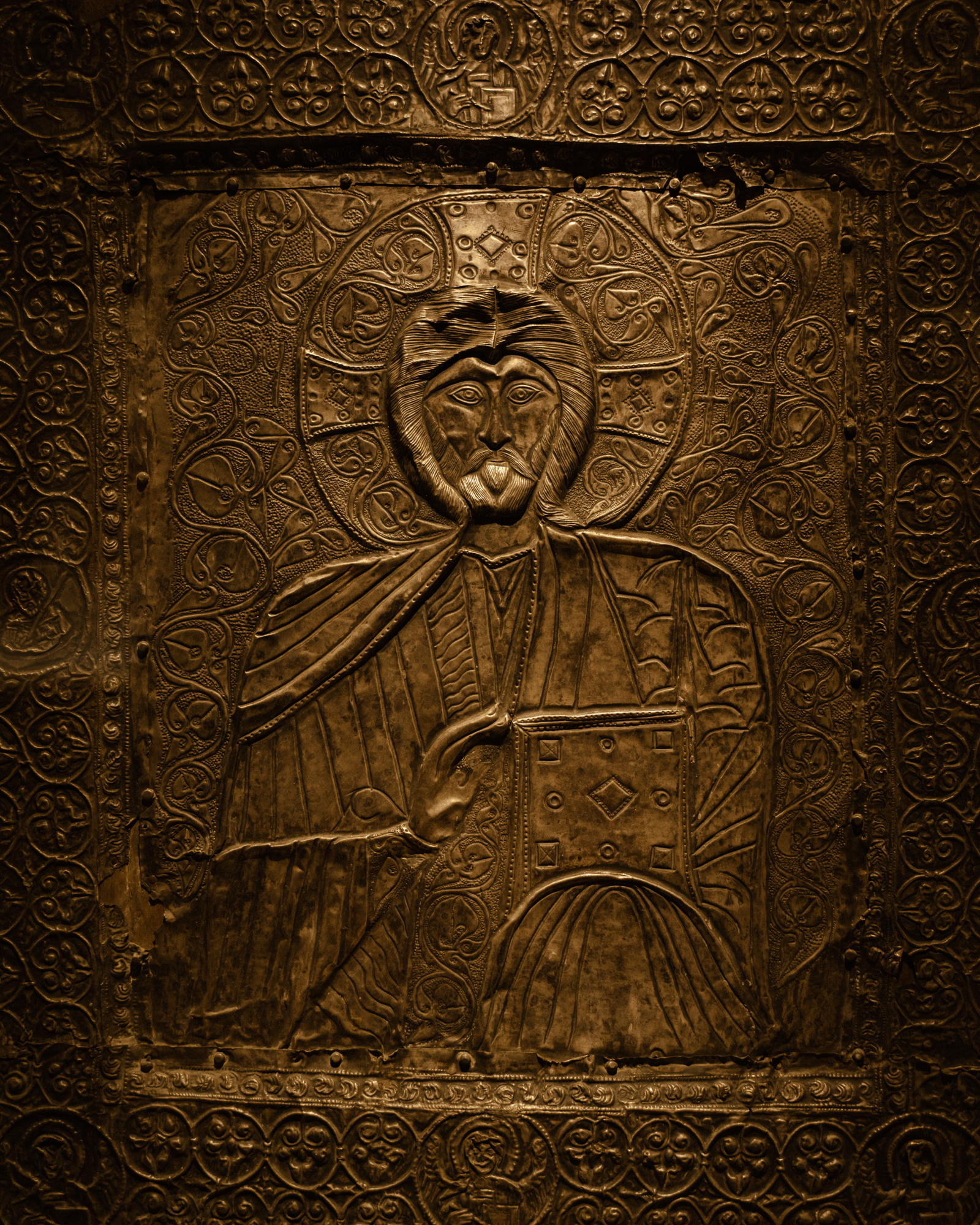 Top left: A formidable fortress village stands tall adjacent to the Truso Valley. Although long abandoned, it still cuts an imposing figure, demanding our respect and attention. Top middle: A dirt road runs alongside the border with Azerbaijan. From barren steppes to lush forests on the sides of the Iori River, the area is overflowing with stunning scenery that holds the power to make you forget what continent you are on. Top right: Towards the end of the afternoon, this medieval monastery, nestled in a verdant setting, is fully illuminated by the sunlight, putting on a grand show. Bottom left: Here, the hills have been sculpted by the wind. The ride is particularly gorgeous at sunset when the sun kisses the rock walls in a show of shadows and light. Bottom middle: A dirt track opens up to unveil the immense meadows of Truso Valley, coloured white and red by the iron springs that surge from the mountains. Bottom right: Religious icons are a familiar presence in homes and cover the walls of every church in Georgia. Some of them are true works of art, delicately carved or sculpted. 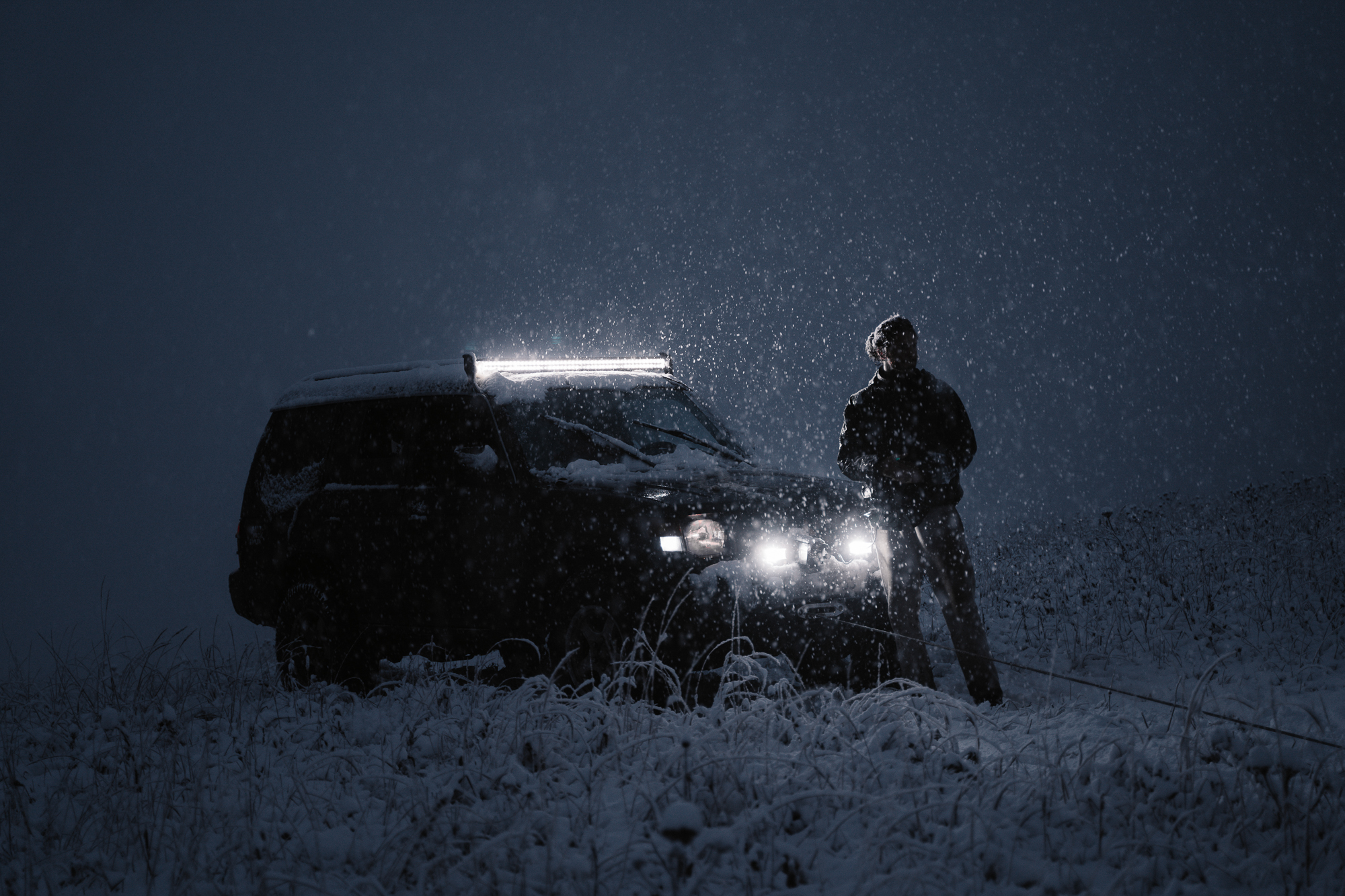 You must be prepared for anything in Georgia, with your wits about you at the ready. Snow can overcome you in an instant.

Olivia and Victor are both authors, photographers, publishers, and whole-hearted adventurous humans passionate about traveling off the beaten track, connecting with nature and other people as they go. After living the conventional life in France, (Victor as an engineer and Olivia as a veterinarian), three years ago, they set out to live their dream and created OunTravela, a guidebook publishing label for independent travelers in search of authentic destinations and memorable experiences. Having already published two books about Ladakh and Kyrgyzstan, Explore Georgia will debut in December 2022. Halfway between a road book and a travel guide, it will be a compilation of maps, photographs, and practical information for travelers by van, 4WD, motorcycle, or bike.