I have to admit, when I was first handed the GearPods® Wilderness emergency kit for evaluation I chuckled. Decades of testing, reviewing, and custom-tailoring such kits have left me with a bias against “off-the-shelf survival”, and the bold packaging complete with photos of extreme adventuring did little to counter this prejudice. As I’m not one to judge a book by its cylindrical plastic cover, I set aside my first impression and dove into the kit with an open mind.

As I unscrewed the first cylinder from the kit, it occurred to me this odd design actually offers practical value in the form of three extra water collection containers—clever. Continuing the cleverness trend, each “pod” can be unscrewed from either end, virtually eliminating the possibility of the components becoming stuck inside (particularly handy for extracting the stove). The pods aren’t totally waterproof, but they are sealed well enough to shrug off weather and most of the vulnerable contents are in plastic bags. Water leaks in very slowly when the kit is submerged; I wouldn’t hesitate using it as a kit in a small boat where larger kits may not fit. While not advertised as such, the kit does float.

Inside “Shelter” is the same foil thermal blanket found in nearly every survival kit (why mess with a good thing?), and a 54-inch by 78-inch tarp. The tarp is surprisingly sturdy and features tie points around the perimeter and in the center. While small, it is sufficient to cover the average human body, and likely as big as can be included in a kit this small. Most people involved in a survival situation will be looking for rescue, and the bright orange color will do plenty to increase visibility and the odds of being spotted (see notes below). As with most tarps it is very difficult to fold it up as small as it was when first opened. Thankfully, a small stuff sack is included to help with repacking. 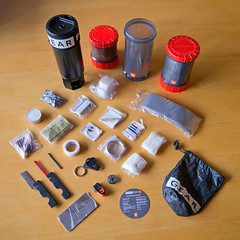 In the cap of “Survival” is a list of the pod’s contents and brief instructions on signaling for help. All of the survival gear is stored inside the stove pot, which makes sense given the limited space. Unfortunately, the lid is tight and nearly flush with the rim of the pot, making it extremely difficult to open even in my nice warm workshop. This is a potentially fatal flaw in a cold-weather survival situation. A knife can be used to easily pry the lid open, but it’s also in the pot—right next to the fire starting gear. The pot tips over quite easily on it’s own due to the odd “nesting bulge” on the bottom, but when atop the assembled burner the slender stove is more stable than expected. Additional support for the complete stove unit is provided from the integrated stabilizing feet which swing out from the base. As there is no handle, care must be taken when using the pot with a proper fire. The stove burner is easy to set up and includes a wind screen and two fuel tabs. The rest of the survival gear, packed in another convenient little GearPods® stuff sack, is of good quality: emergency whistle, signaling mirror, button compass, folding knife, folding saw, keychain flashlight, storm matches (10), tinder, firesteel, candle, six feet of duct tape, 25 feet of galvanized steel wire, 25 feet of nylon cord (70-lbs rating), water purification tablets (6), water collection bag with tie, waterproof paper (2), pencil, repair kit (with thread, needles, safety pin, and buttons), and a fishing kit. This much stuff is difficult to repack into such a small space, a task that must be performed occasionally as water purification tablets do expire. 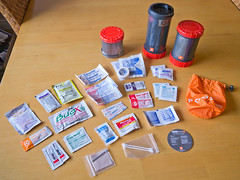 As the name implies, “Health” is about more than simple first-aid. I have to give GearPods® props on the contents of this pod: prevention, an area where even large emergency kits often fall short, is well covered for such a small kit. Sunblock, lip balm (Bilstex), insect repellant, and moleskin (blister prevention) are all included. Still, there is room to spare in the pod, and I would much rather see the reactive items like the large After Sun packet replaced with more prevention items (like 5-6 more packets of sunblock). Fortunately, the reactive treatments also cover a few non-preventables, such as insect bites/stings and poison ivy/oak.

The first-aid portion of the kit is not overdone—a common problem which GP has managed to avoid. Several adhesive bandages, two small and one large butterfly bandages, two 2×2-inch gauze pads, 2.5 yards of tape, and two cotton swaps are included. The medicinals are kept to an appropriate minimum, with only one packet each of Tylenol, ibuprofen, and triple antibiotic ointment present. The rest of the chemicals are limited to wound and skin cleaning only, just as they should be: hand sanitizer, alcohol prep pads, and iodine wipes. Two packets of aloe-based burn gel are also included—a welcome addition considering the likelihood that the burn being treated came from the the only water that could be collected, which is now boiling in the pot. Swiss-army-knife style tweezers are also present, though considering the space available they should be replaced with the far superior Uncle Bill’s Silver Grippers.

As kits go, GearPods® has done a good job squeezing a surprisingly comprehensive kit into a very small space. The plastic pods are sturdy, and the clever design means you can add on additional pods to expand and customize the kit to your heart’s content. With a few simple additions this would be a perfect emergency kit for an adventurer’s soft-roader, motorcycle, ATV, or other small vehicle.

This and other GearPods® kits, components, cases and accessories can be purchased from gearpods.com.

Note: Since the time of this writing, GearPods® has replaced the blue Nano Tarp with the new orange Adventure Tarp, the stove’s detachable base with an integrated version, and vastly improved the stove’s wind shield—all great improvements over the original kit. Unfortunately, the stove pot still has the same problematic lid.

Chazz Layne is an adventurer, designer, and photographer based in Prescott, Arizona. Since early childhood he’s had a passion for travel and exploration, a passion which continues to fuel both his creativity and modern nomadic lifestyle. In addition to his work in design and photography, Chazz is a regular contributor

to Expedition Portal and Overland Journal. You can connect with Chazz or learn more about his activities at chazzlayne.com.

The (Secret) City of London 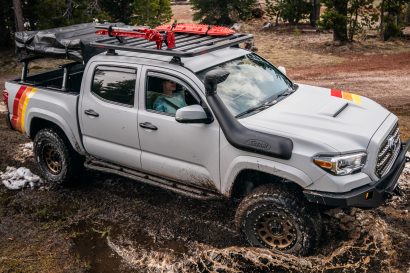 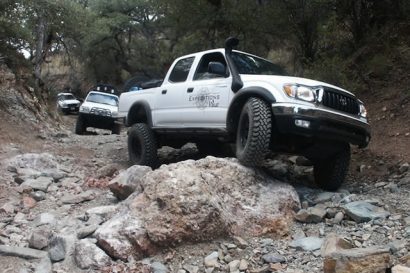 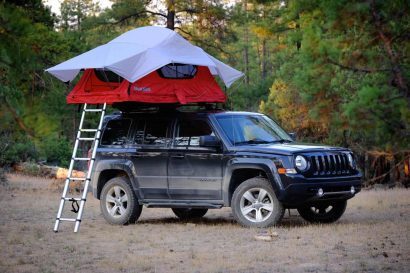