I’m a pretty big fan of Luci lights. These solar-powered lamps are affordable, durable, and have served me well in conditions ranging from Arctic snows to scorching Outback heat without failure. They last for hours, charge quite quickly, and most importantly, strike a rare balance of lighting up your camp without blinding you like a ridiculous flood light. Yet they do have one weakness: if you want to illuminate a large area, you’ll need more than one. Despite their generous spread, a single light just can’t provide the coverage for larger spaces, and that’s exactly where their new string lights come in. 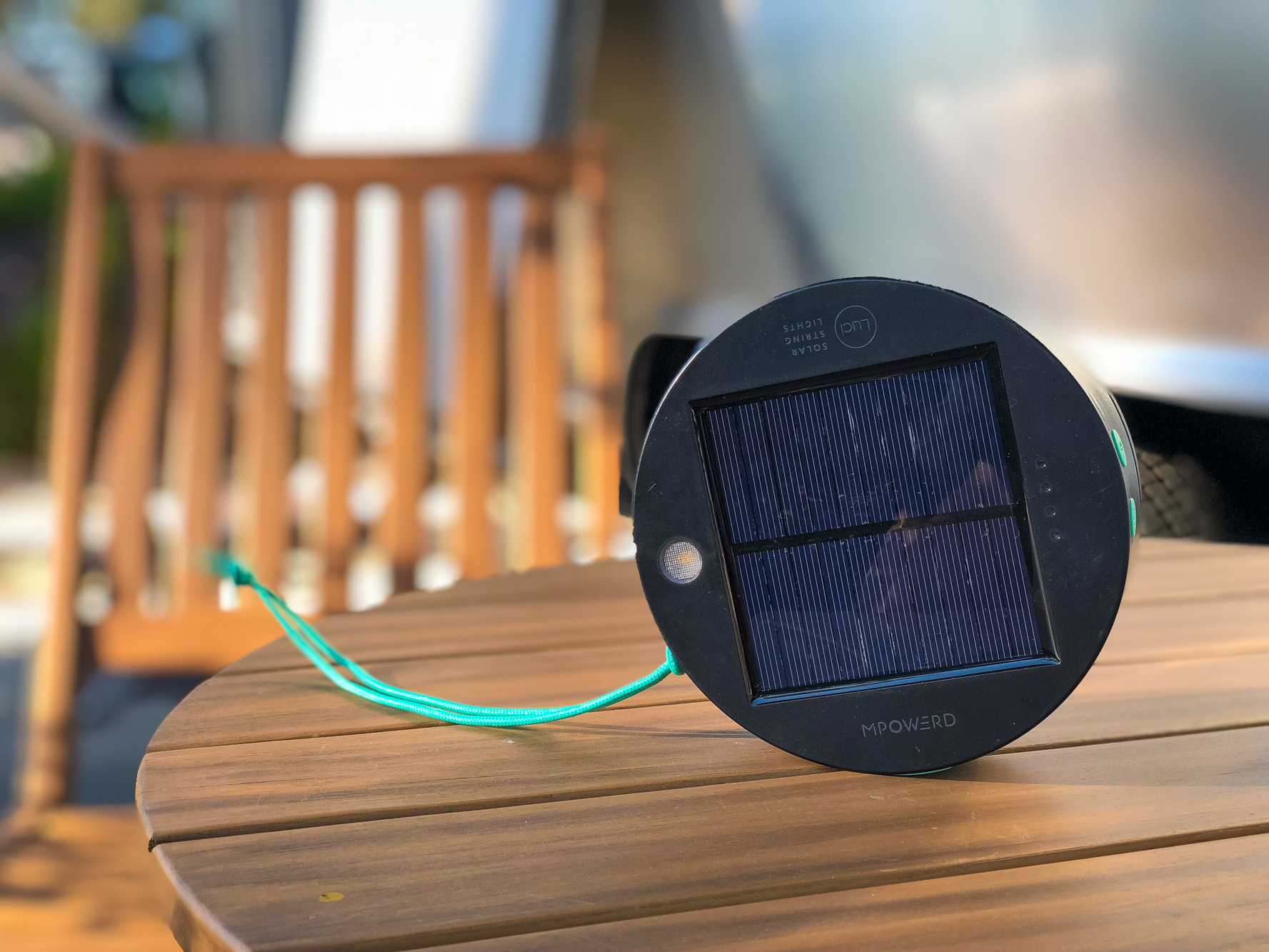 Like the original lights, the string lights are completely solar powered, but they can also be charged via USB cable in your car in inclement weather. The product consists of two main components: an ABS plastic base with a built-in solar panel, and an 18-foot strand of nylon braided cord with LED nodes. The light strand contains a total of 10 nodes, each with two lights that face opposite directions for universal and even coverage of your entire camp. Special clips along the cable allow you to tie it off to just about anything, which is a lifesaver when trying to hang them on awnings and vehicles. Although this cable isn’t completely waterproof, it is IPX4-rated splash resistant. 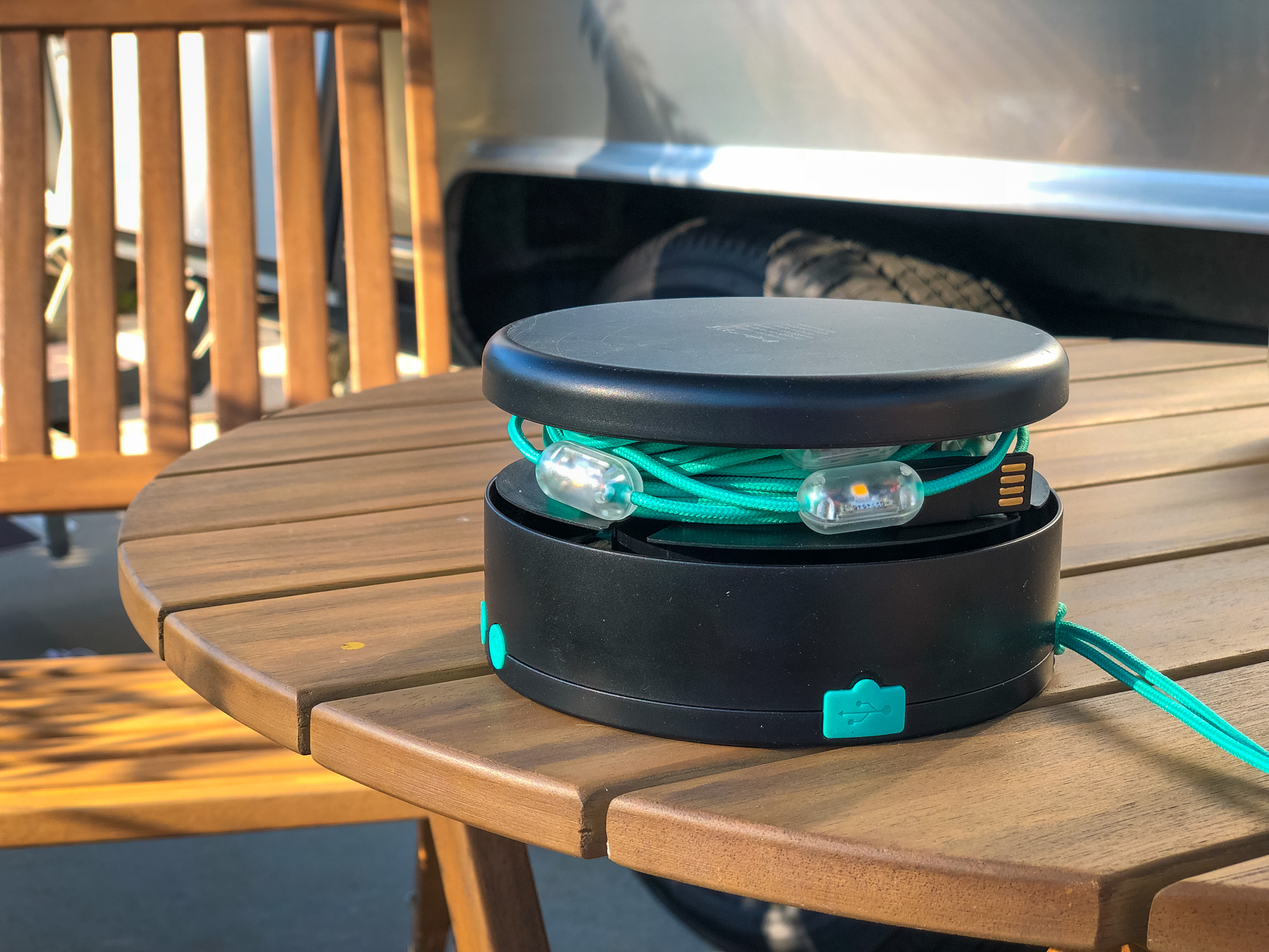 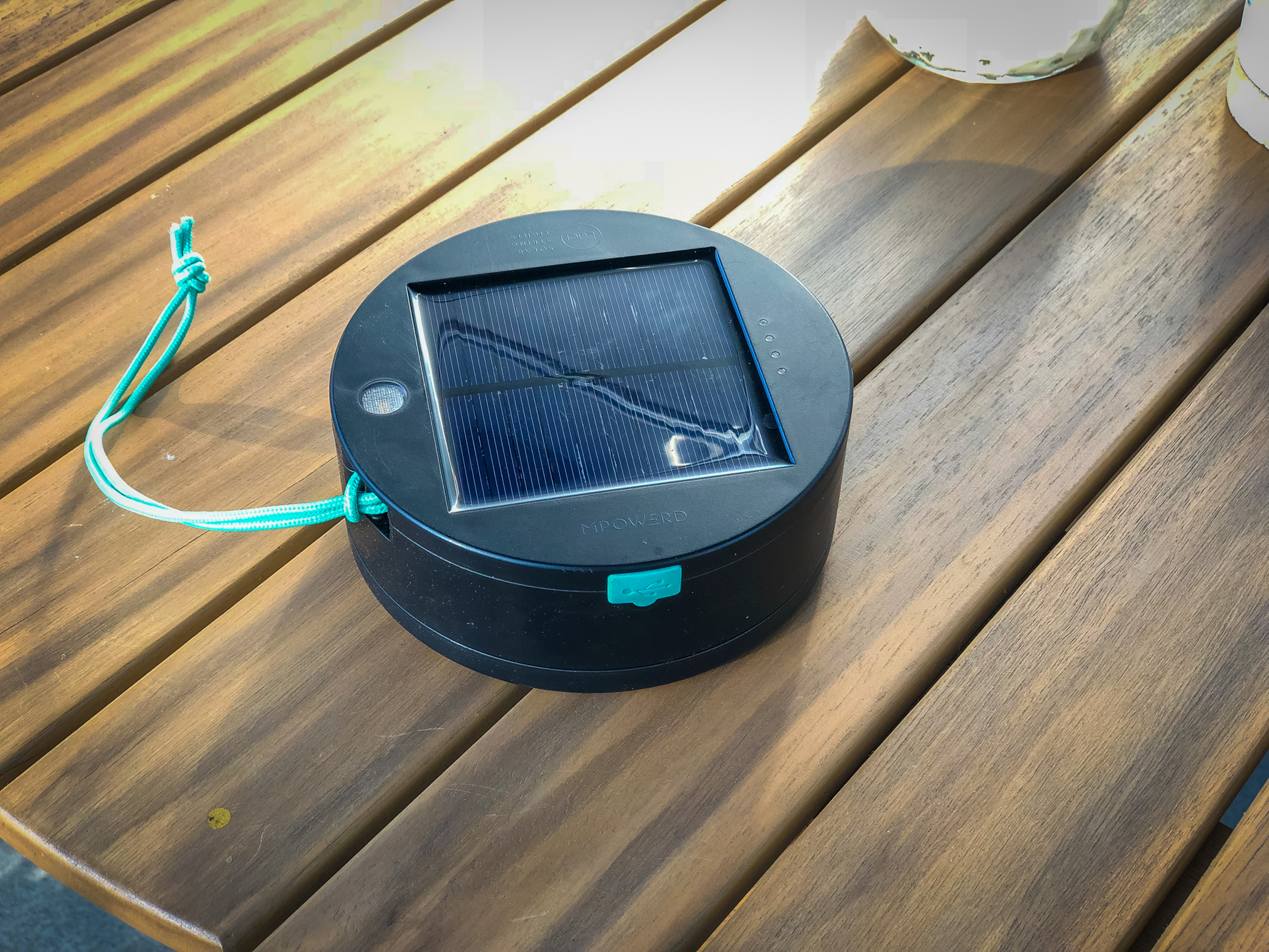 The base, on the other hand, is IP67-rated waterproof, and durable enough to take a fall or two. It can also charge your mobile device and includes a battery indicator with four lights to display the current percentage remaining. My favorite feature is the built-in storage for the string lights, which keeps the cable tangle free and hidden when not in use. After dealing with the mess of other string lights, I can’t thank MPOWERD Inc. enough for providing such an easy storage solution.

A full charge requires 14 hours of direct sun or 2-3 hours of USB charging, but this will give you up to 20 hours of consistent light in camp.

Now that I’ve been using the string lights for a month, I can say that I like them far more than I had expected. While the teal accent color isn’t my favorite, the light itself is absolutely phenomenal and never fails to set that camp vibe. For less than $35, I can’t think of a lantern I’d rather have.

To learn more, check it out on the REI website here. 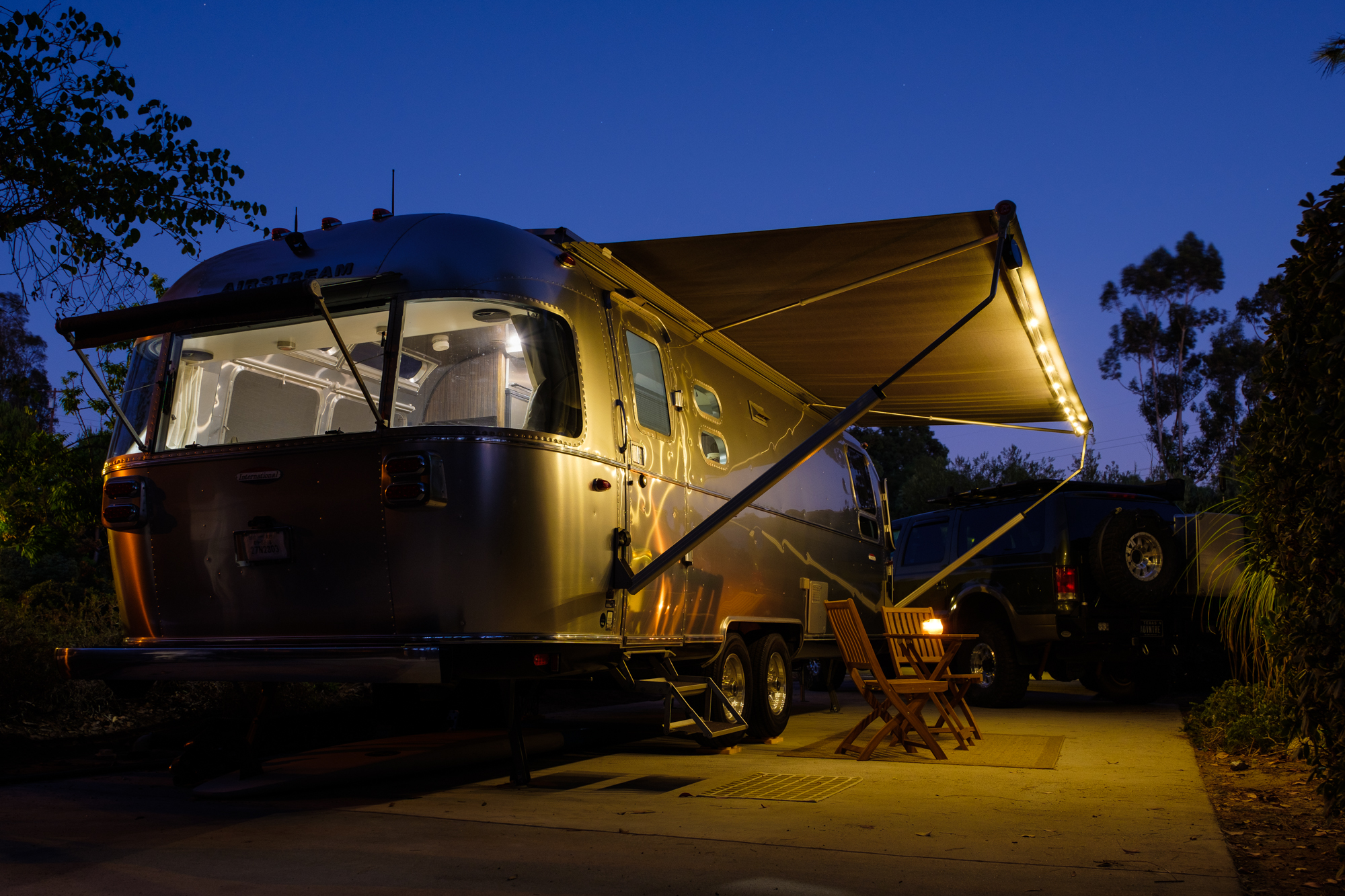 Air Out There Fresheners

They say that one of the longest lasting triggers for memory is smell, and I’d say that makes good sense. After all, the smoky fragrance of a bonfire, sweet scent of roasting marshmallows, and alluring perfume of the pines never fail to bring a smile to my face, but let’s be honest, there are some adventurous odors that aren’t so pleasant. For example, you.

Let’s not get offended now. After three or four days in a car without a shower, we all start to smell a little ripe, as do our vehicles. Add in outdoor gear, kids, and dogs, and things really get interesting. I’ve used odor-elimination methods ranging from driving with the windows down to Febreeze bombing my truck in the past, but I recently discovered a new favorite: Air Out There fresheners. 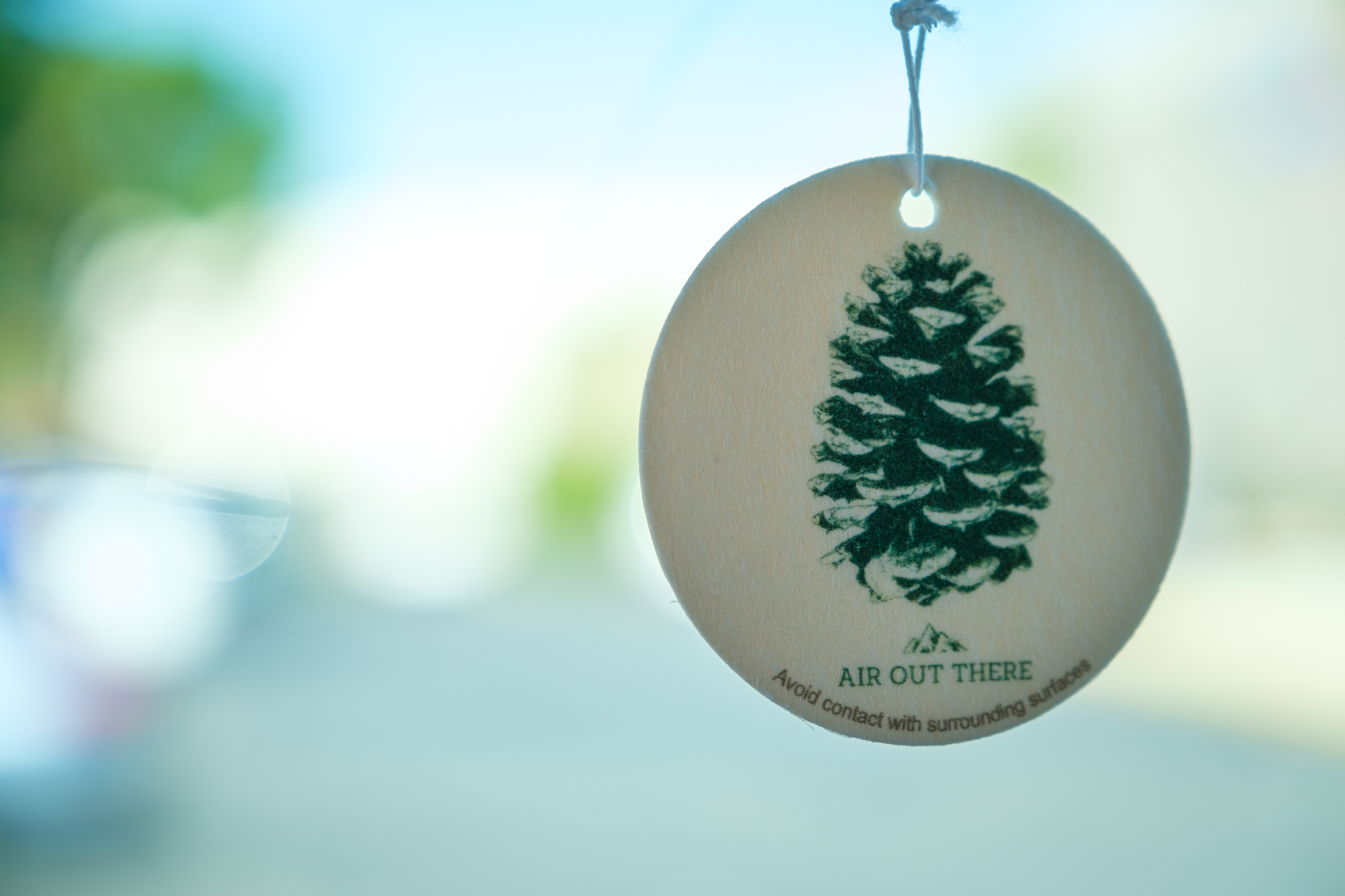 Now if you had asked me about air fresheners two months ago, I would have enjoyed a rather hearty, even belly-shaking laugh. I mean really, who wants to hang one of those cheap Christmas tree things in their trucks? But alas, when I spotted an overland themed air-freshener company called Air Out There Co, I decided to give it a shot.

They come in scents like Bolinas, Palms, Sierra, Aloha, or Pine, and at $2.50 a piece they hardly break the bank. What they do break, are all of your preconceived notions of air-fresheners. That’s because they not only smell amazing but slam you right back into memories of camp trips long past. Sweet ocean breezes, misty mountain mornings, evenings spent beneath the stars—every time you get into your car is like a mini vacation to your favorite destination. 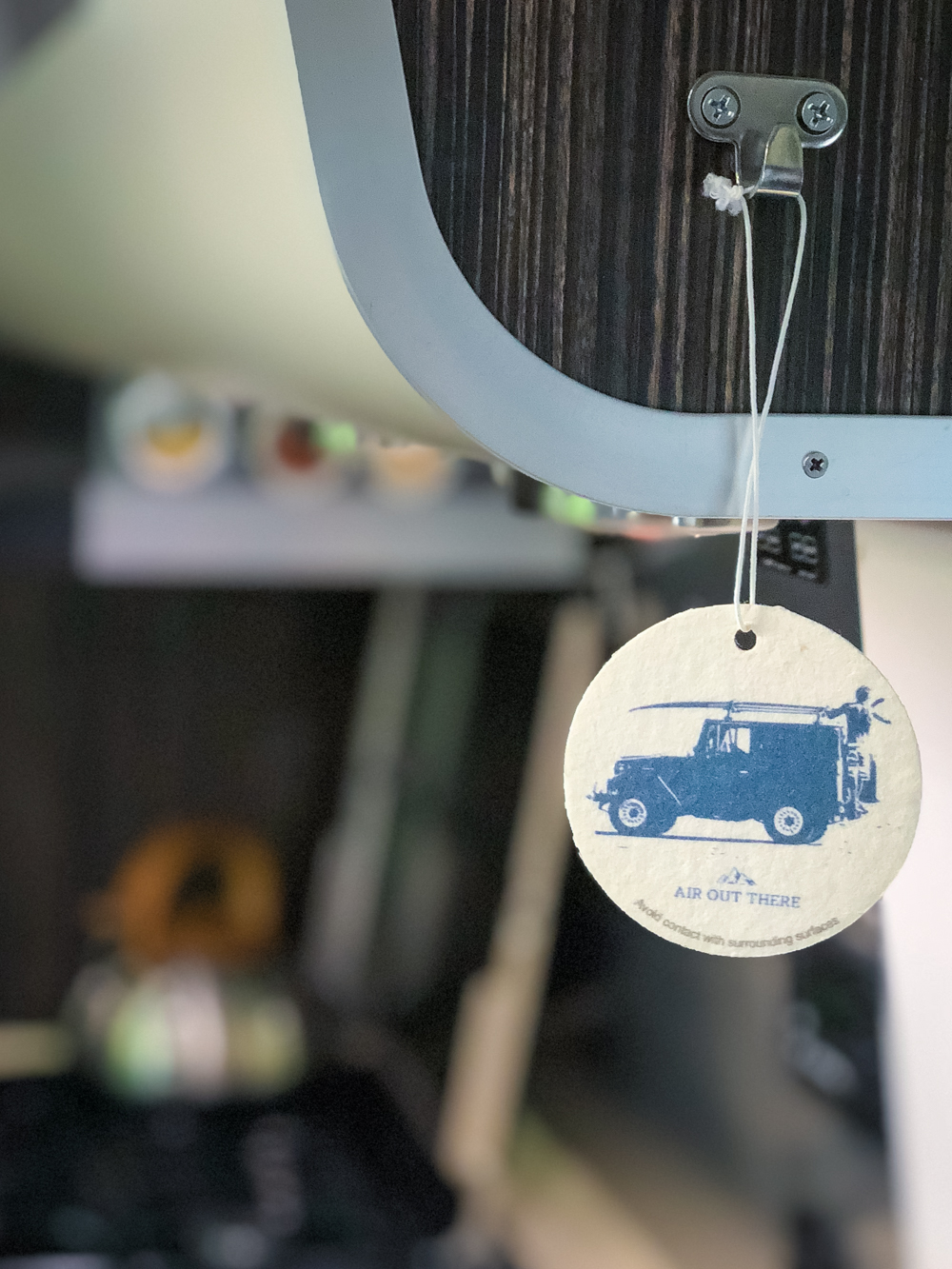 Unfortunately, they’re not magical never-fading scents. I found that the fragrance was strong for the first week, but after that, it became weaker, especially if I drove with the windows down fairly often. I suppose that’s to be expected though. Besides, it pales in comparison to a much bigger problem with these products, they’re easy to steal. I know this because my girlfriend takes advantage of this weakness regularly, and has made off with three of my air-fresheners since smelling the Sierra scent in my Excursion. She was kind enough to place one of them in our Airstream though, and I was delighted to find it filled all 27 feet nicely. Not bad for a little air freshener.

At the end of the day, an overland air freshener is still somewhat cheesy, and maybe even laughable, but I can’t deny that I love using them, and I bet you will too.

To learn more about this product, or to try one for yourself check out their website here.

Talking about underwear with thousands of strangers feels a bit weird, so I’ll keep this brief. Get it, brief? Jokes aside, having comfortable undergarments goes a long way when you’re traveling or just living everyday life. They can keep you cool, prevent chafing, and give you greater freedom of movement leading to a much better day. Unfortunately, most underwear just isn’t up to the challenge. That’s exactly why Saxx set out to raise the bar with an array of boxers and briefs focused on comfort, longevity, and convenience on the road. 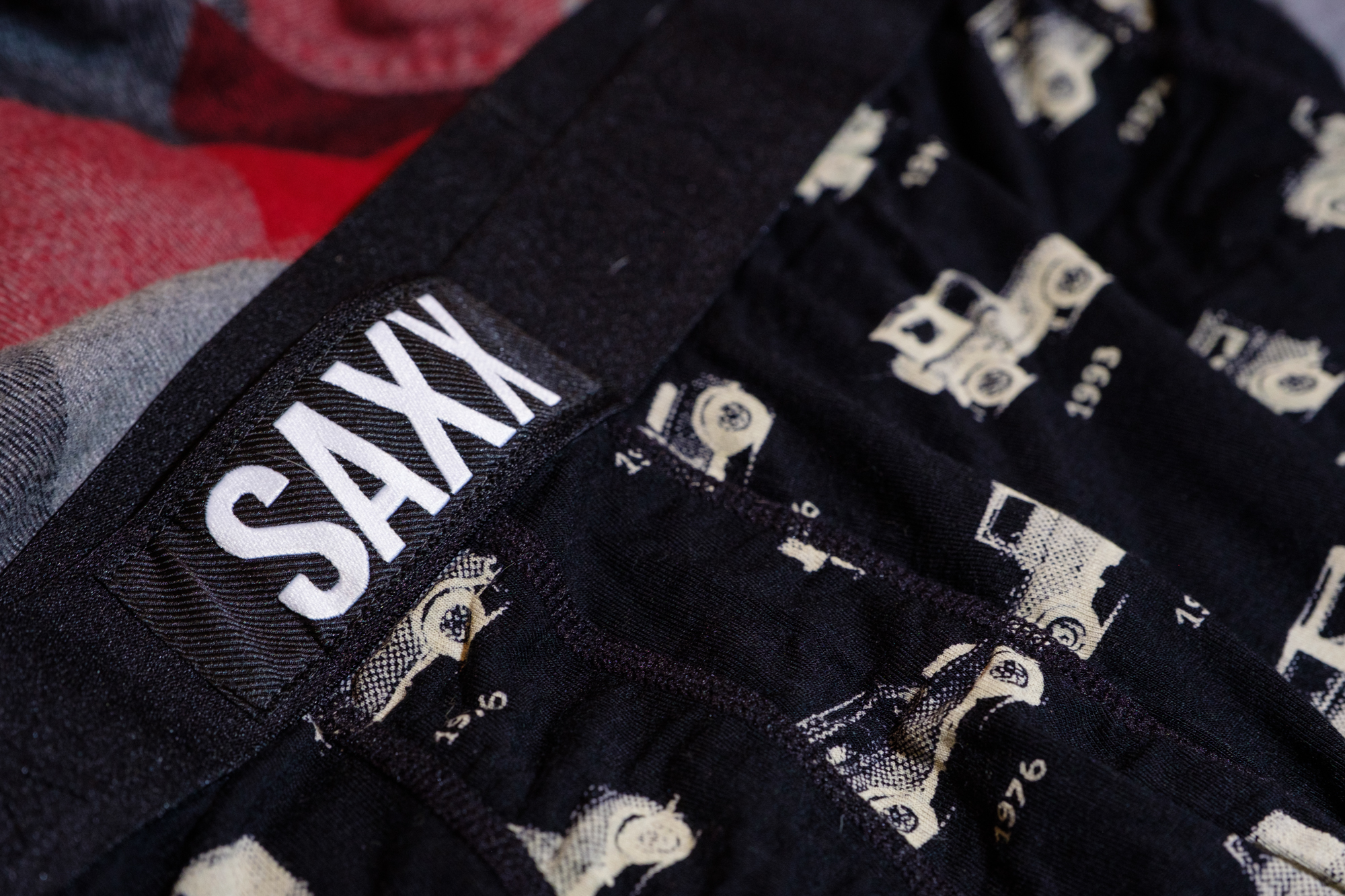 Their travel series underwear has four main features that really make them stand out. For starters, they’re all moisture wicking, which keeps you dry and cool even in the most humid of climates. Next, their designers use nine fabric panels to achieve a “Three-D” ergonomic fit that forms comfortably to your body. They then do something a bit creative. They turn the seams inside out, placing the flatter, softer side inside the underwear, and the chaff-inducing seams on the outside. Finally, they include their trade-marked BallPark Pouch. Yes, really. Their site describes it as “a 3D hammock-shaped pouch designed to keep everything in place,” and we will stick with that description. 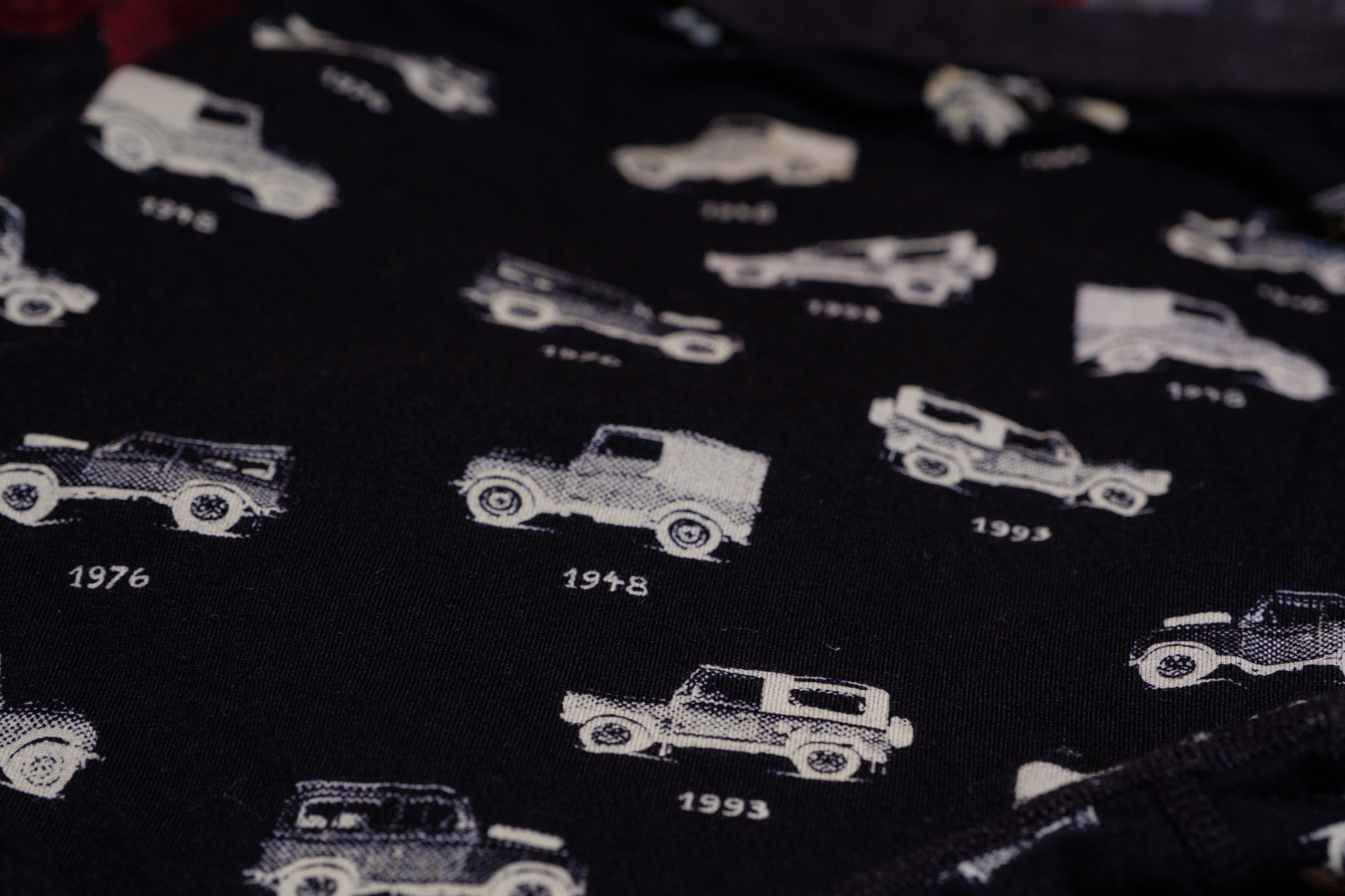 After a month of testing, I can’t say enough about how comfortable these underwear are, or how well their technology works. They pack small thanks to the lightweight fabric and can be worn for longer stretches of time than your standard undergarment. I can really only find two issues with them. First, they’re a bit pricey, about $35 a pair for the travel series. Second, and more importantly, their Land Rover fabric pattern was called Jeepster. Not cool guys, not cool.

To learn more about Saxx, visit their website here.

It is definitely the age of “craftsmanship.” Everything from beer to boats seems to have a handmade segment, and the examples get more ridiculous every day. Camping certainly no exception. In fact, with the popularity of the adventure scene on Instagram, I’d say it’s one of the hotspots for handcrafted high-end products. Take Nineteen27 for example, a company named after the year that the first s’mores recipe appeared in print, and they make, you guessed it, gourmet s’mores. 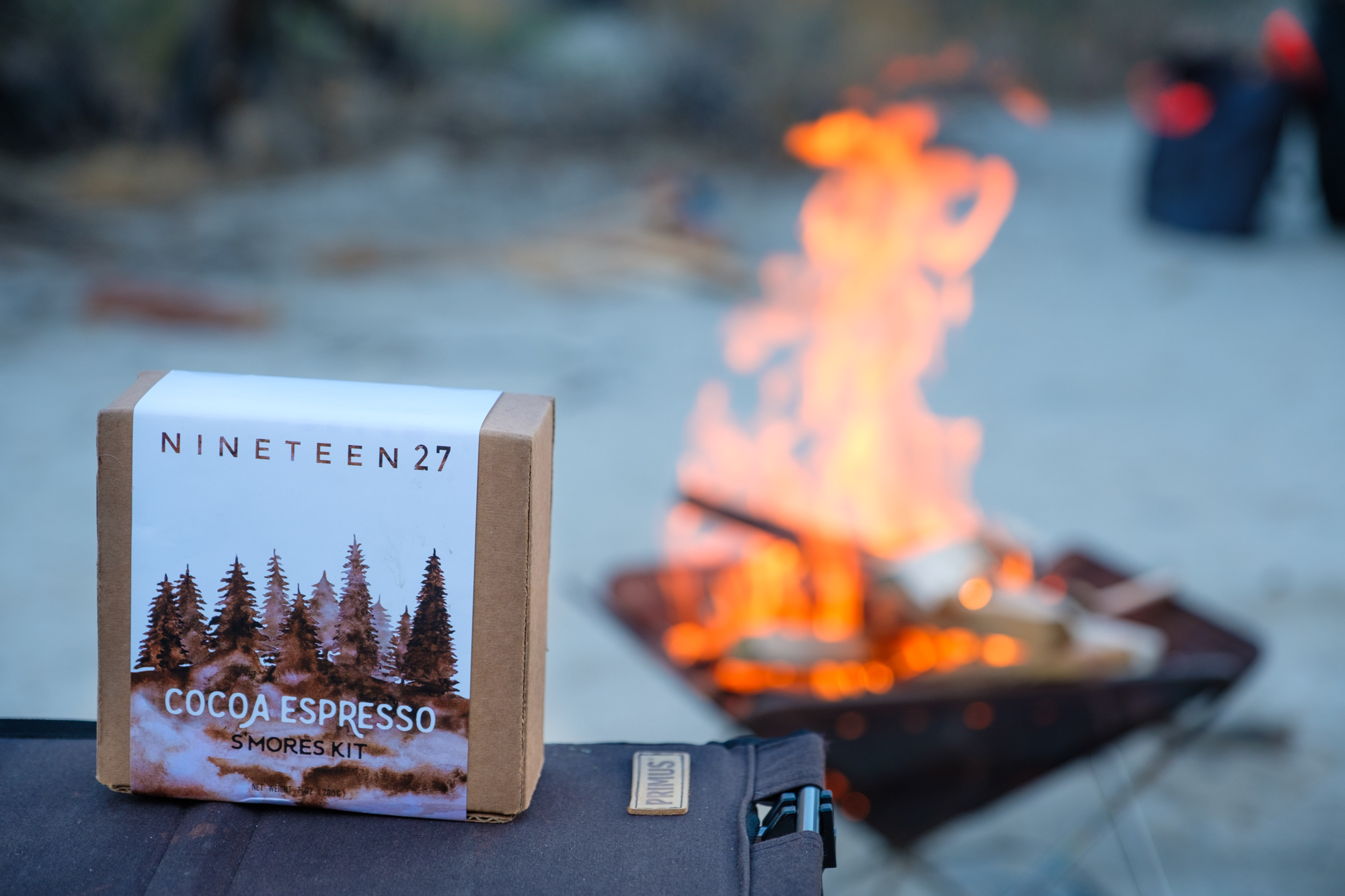 Now I’ll be honest, I’m no chef. I grew up as the kid who would set his marshmallows on fire because he was tired of waiting for them to brown, so the idea of high-end s’mores actually made me snort the first time I heard it. Yet, I found myself intrigued. Come on, who wouldn’t want to try cocoa espresso or pumpkin pie s’mores? So, I ponied up the cash and ordered the cocoa graham crackers with Water Avenue Coffee El Toro marshmallows. 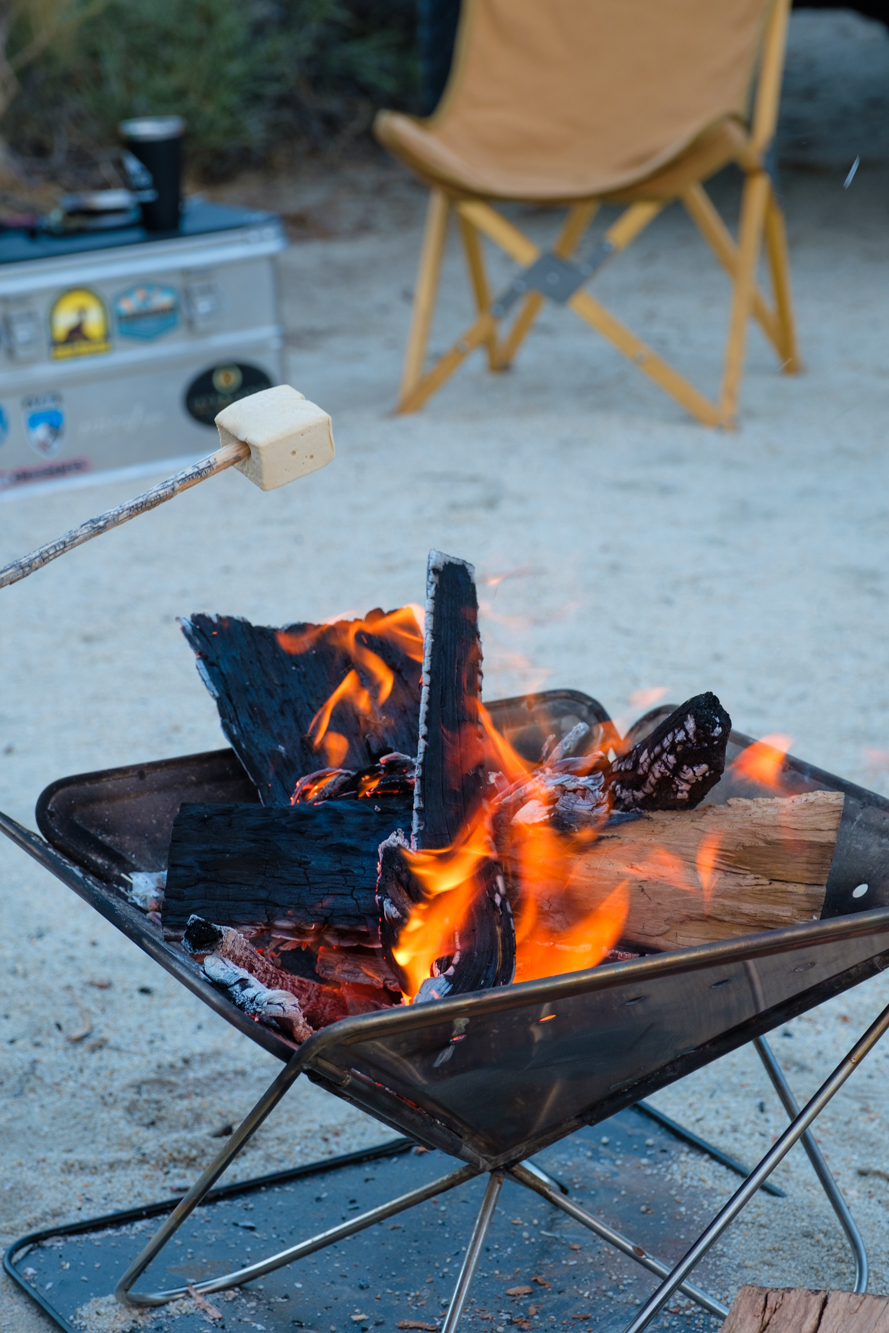 Now I will say that the ingredients in this package are nothing like the ones you’d buy at a store. For starters, they’re shaped specifically for s’mores, i.e., square, so you won’t have the graham cracker breaking in half over the marshmallow problem you normally encounter. They’re also packed with serious flavor, so it tastes like biting into a fine desert at a restaurant rather than your average camp concoction. Heating them over the fire is as easy as you’d expect, but somehow nerve-wracking because there’s not a practically unlimited supply if you accidentally drop the marshmallow into the flames. It’s worth it though because when you take that first bite, your taste buds are sure to be sent on an adventure of their own. 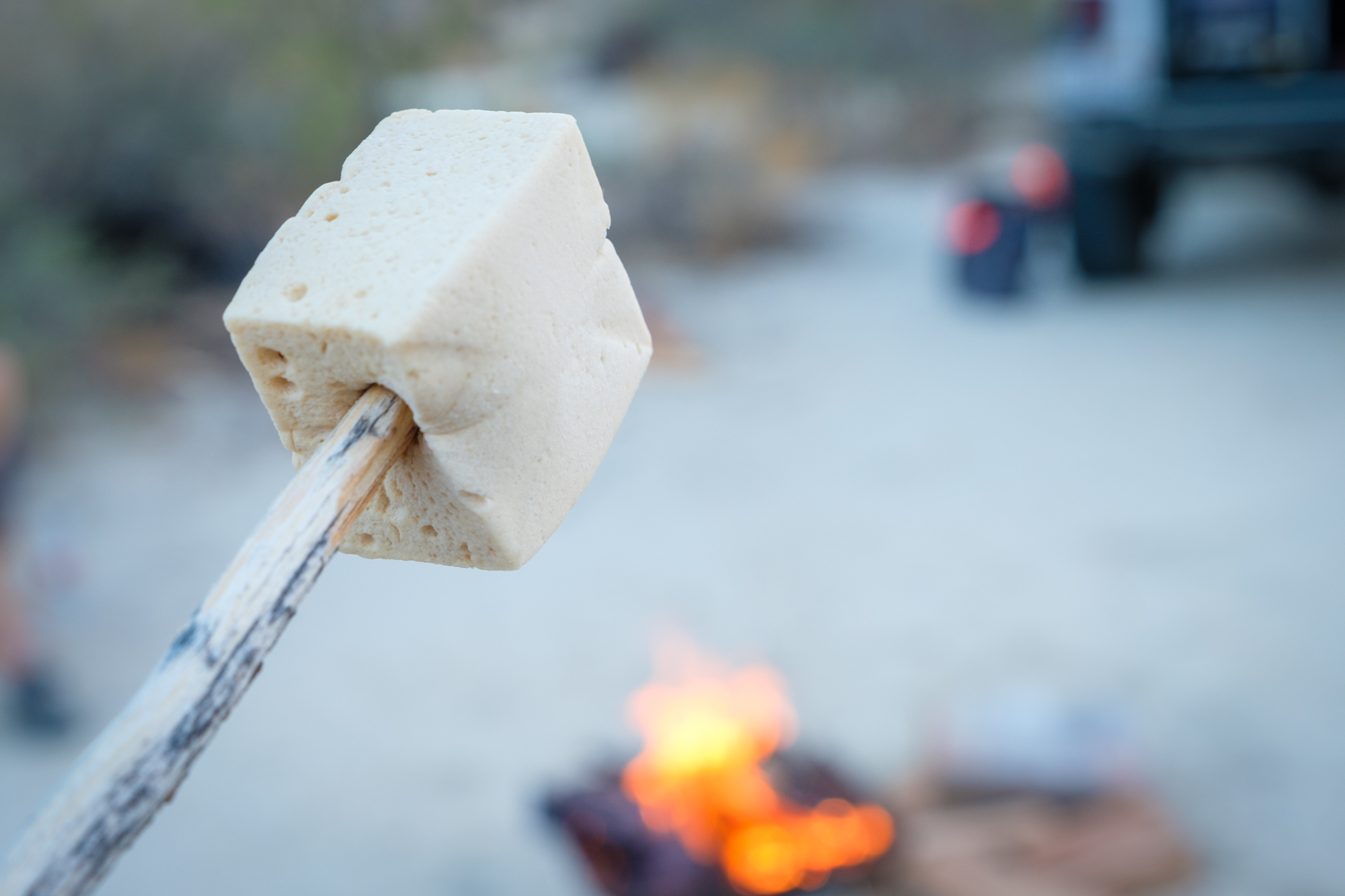 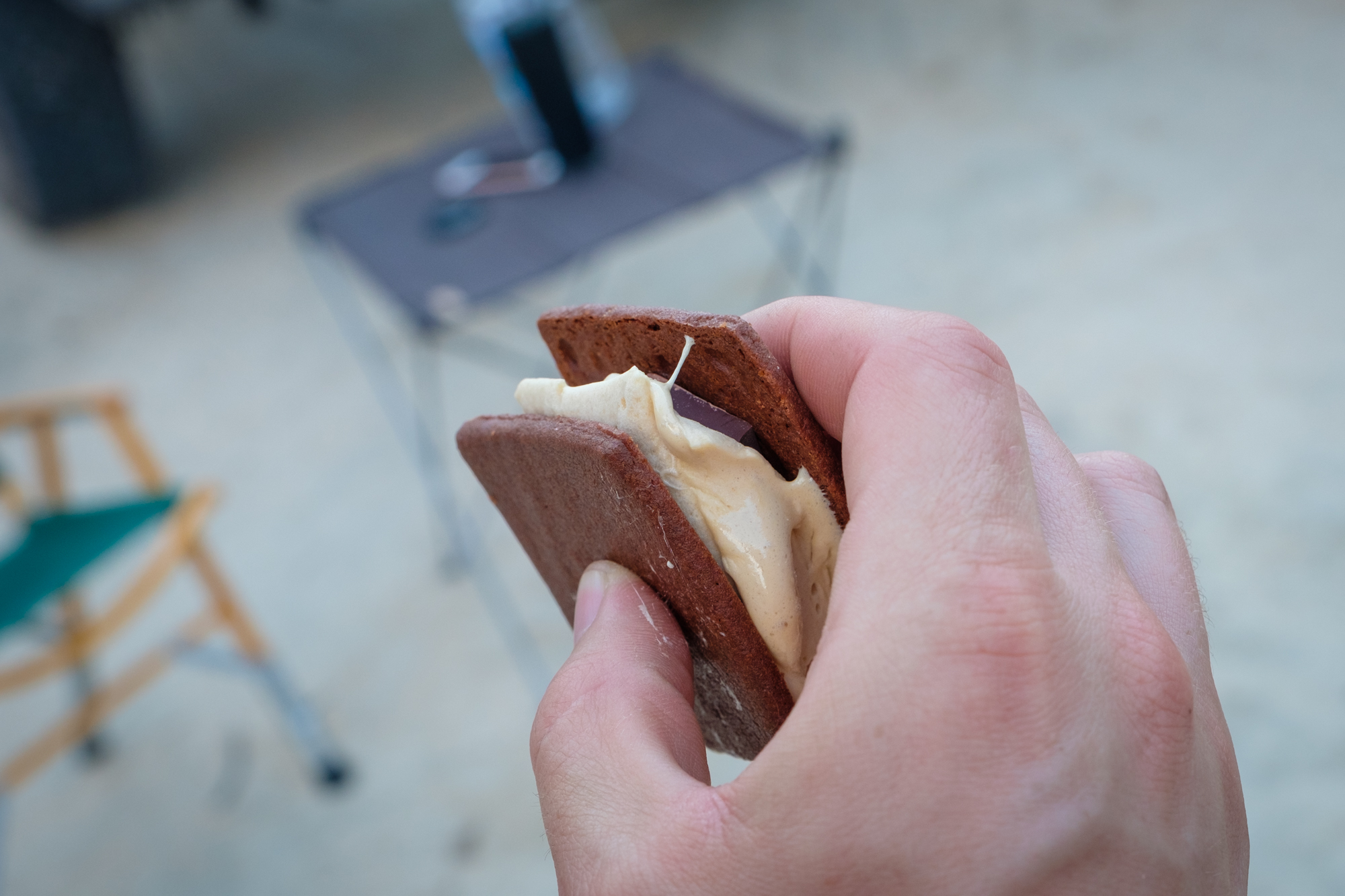 As we expected, the Nineteen27 s’mores are delicious, but we won’t be running out to buy them for every camp trip. That’s because, at $18 a box, you’re paying $4.50 per S’more. Now don’t get me wrong, they’re probably worth that, but the old-school camper inside me aches at the thought of turning a cheap camp tradition into something fancy. So if you’re looking for a fantastic way to celebrate a special occasion, a fun treat to make indoors on the stove-top on movie night, or an exceptional way to impress your date, these s’mores are a great treat. If however, you’re looking for something to give the kids on your next camping trip, maybe stick to tradition.

To learn more about these s’mores, check out the Nineteen27 website here.