As explorers and adventurers, no thrill is more tangible than discovering treasures left by those who came before us. Whether we discover a valuable and historically significant artifact or something as simple as a rusted can from the early 1900s, the experience is still exciting. These artifacts can immediately transport our minds to the past, perhaps to times when prospectors and settlers were first exploring the Western United States.

But what about REAL treasures such as precious metal and jewels, INTENTIONALLY hidden where few would dare to search? Sound like a fairy tale? I’m talking about Forest Fenn’s hidden treasure, a real-life fortune worth over one million dollars, intentionally hidden in the Rocky Mountains for one lucky modern-day explorer to discover. And it has been found.

The Thrill of the Chase

Forrest Fenn is a retired Air Force major turned art and artifacts dealer who lives in Santa Fe, New Mexico. After returning to civilian life, Fenn owned and operated an art gallery with his wife where they sold Native American artifacts, paintings, sculptures, and other fine art.

Fenn, who is now almost 90 years old, hid his treasure 10 years ago, somewhere in the Rocky Mountains, between Santa Fe, New Mexico, and the Canadian border. Offering only a poem, a map, and a memoir as clues to the whereabouts of the chest, Fenn estimates that during the decade it remained undiscovered, an estimated 350,000+ people searched for its whereabouts. 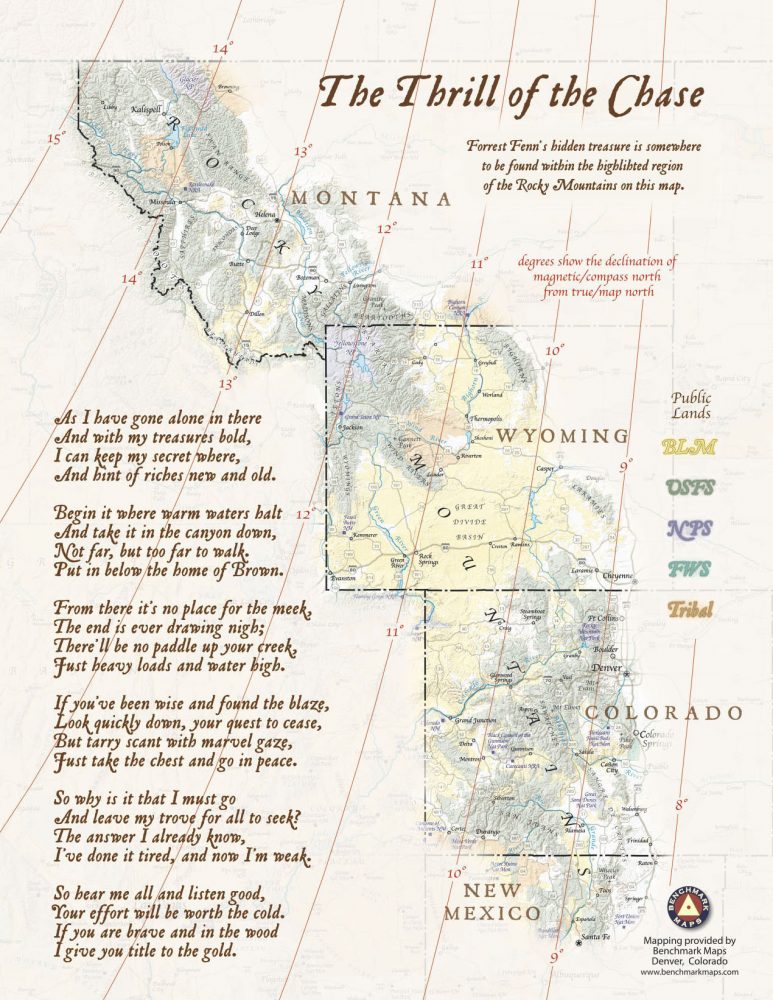 The treasure map and poem from Fenn’s book. Benchmark Maps/Courtesy of Forrest Fenn

While this adventure might seem like fun and games to most people, many explorers took the quest very seriously, risking arrest, and occasionally their lives (at least four people died while searching) for the chance to find the treasure. Fenn posted about the recent discovery of his treasure on Dal Neitzel’s website, on June 6. He wrote:

“THE TREASURE HAS BEEN FOUND. It was under a canopy of stars in the lush, forested vegetation of the Rocky Mountains, and had not moved from the spot where I hid it more than 10 years ago. I do not know the person who found it, but the poem in my book led him to the precise spot. I congratulate the thousands of people who participated in the search and hope they will continue to be drawn by the promise of other discoveries. So the search is over. Look for more information and photos in the coming days.”

Fenn confirmed the discovery of his treasure via a photo of the chest that was emailed to him by the man who discovered it. The man would not share his identity with Fenn but stated that he was from the East Coast.

There is some speculation about the legitimacy of Fenn’s treasure, some claiming that it never existed and was all part of a scam to sell his memoir. Others simply want more concrete proof of its discovery.

Whether it was real or just a convincing hoax, there is no doubt that many people believed. There are currently multiple lawsuits between treasure hunters and Fenn, some claiming that they solved the quest and deserved the reward, while others stated that they were defrauded by misleading clues. One treasure hunter even claimed that her solve was hacked and that she is entitled to part of the treasure.

For now, we’ll have to wait and see if Fenn shares more information about the conclusion of the hunt, but for those hoping to learn the specific location where the treasure was hidden, Fenn said he’ll take that information to the grave.