It’s cool for a mid-June morning in central western Nevada. The sun is approaching 30 degrees declination on the eastern horizon, and the mercury is just above 60º Fahrenheit. Pillowy cumulus clouds slipped over the Sierra Nevada during the night and now drift lazily overhead, their shadows casting every tint of a painter’s palette over the spring desertscape. 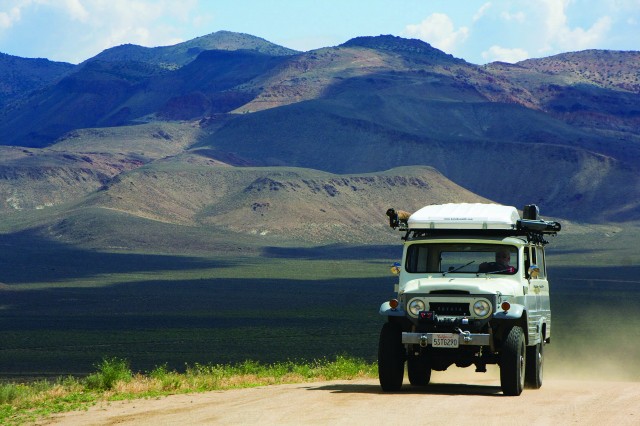 A solid thud shakes the floorboards as we transition off the two-lane to Winnemucca Ranch Road west of Pyramid Lake. As we gain momentum, the sound of each bump, chuckhole, and bit of gravel reverberates through the sturdy steel body panels and off the anvil-flat windscreen with a harmonic drone, analogous to the coach-seat din of an old Douglas DC-3. It is a comfortable and familiar sonance. My mind flashes back a few decades, to weekend treks in a friend’s FJ40, tire-skipping down this same stretch of washboard. But the chassis beneath me isn’t your basic FJ, and the guy to my left, David Berry—I’d say he’s in the upper echelon of Land Cruiser aficionados.

Like many of us, David had logged thousands of miles through America’s heartland, occasionally eyeing a vintage Camaro, Willys, or ‘56 Chevy becoming one with the landscape in someone’s cornfield. In 1999, somewhere near Riverton, Wyoming, he glimpsed a dilapidated FJ45LV sprouting up behind a barn with a few other icons of automotive lore. Having grown up traversing the deserts southwest and latitudes of Baja Sur, Mexico in the jump seat of his dad’s FJ40, and having held title to a dozen or so Cruisers over the years, we’d say David’s blood is, um, FJ-positive? Recalling the cliché, One man’s trash is another man’s treasure, he turned around, pulled in the drive, and knocked on the door. Nine months and a dear sum of $300 later, the slightly used LV was in his rearview mirror lashed to a flatbed trailer, and heading for a new home in California. 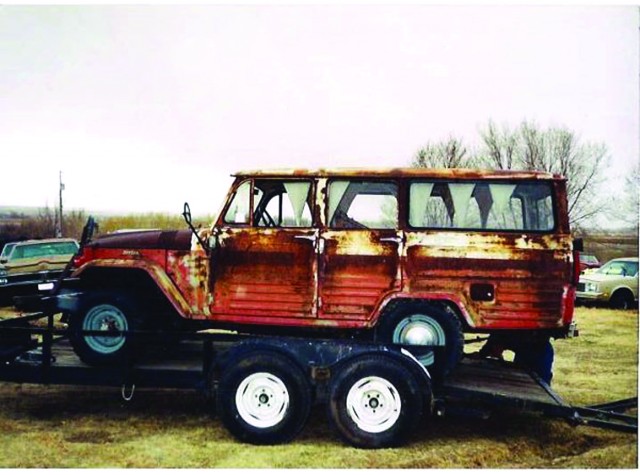 One of only 5,080 LVs produced between 1963 and 1967, the previous 22 years in the weed patch had been rough on the old girl. The OEM paint had a wind blasted patina, seats, headliner, and rubber components resembled a fissured Botswana salt pan, and weeds had been sprouting through the now-ventilated floor-pan. But the body panels and roof were clean and straight, the glass was intact, and the chassis was solid. And the 1,000-mile drive home gave him a few hours to mentally iron out the LV’s future. Given the uniqueness of his newly acquired treasure, and David’s vision of a world-class overlander, this would be more than a B-grade restoration.

From the ground up 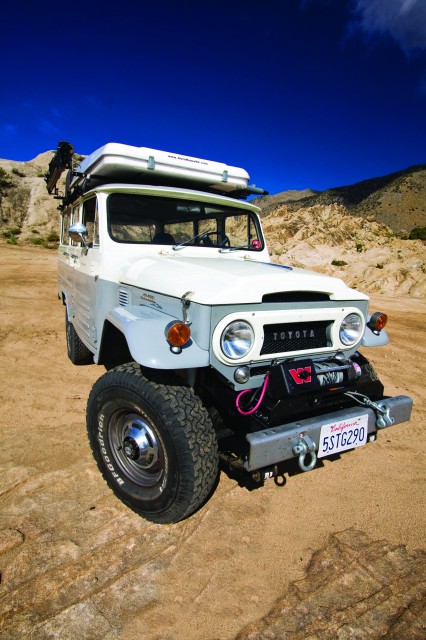 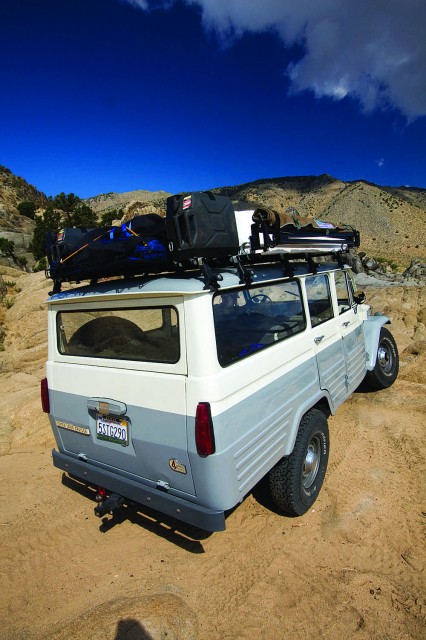 From the firewall forward, the 45LV is a mirror image of a contemporary FJ40. Move aft and it resembles a vehicle built in the forties. Sandblasting the body revealed that each body panel was factory-sprayed with molten lead and hand-worked to perfection, virtually eliminating visual artifacts of body transitions. David can spin a wrench and run a bead with a welder, but this type of work was way over his head. A floor pan was sourced from LV guru Rick Donnelly, who also put him in touch with Mike Francis, owner of Rock Solid Off Road. Francis agreed to take on the project, and swapped in the new floor pan in lieu of the existing sieve. The fenders, hood, roof, and side panels were stripped to bare metal, reworked, primed, and painted in Heath Gray and Cygnus White (OEM colors for 71-74 FJ55s). With plans for later-model brake and clutch master cylinders, and the desire that all aspects of the LV’s restoration look as clean as possible, a late-model firewall was also grafted in place. The original glass was in good shape, and most could be refitted with available window gaskets, but the windwing rubber needed to be custom fabricated, as did the taillight lenses and Land Cruiser medallion on the rear drop gate. 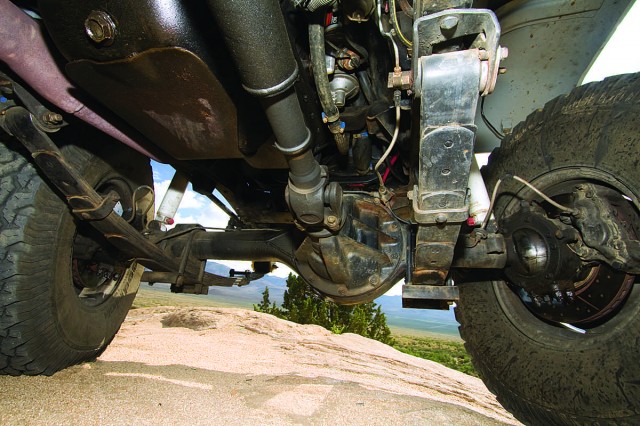 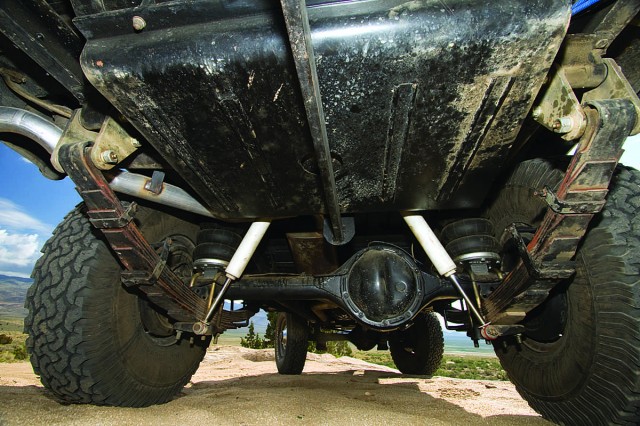 Back at the Berry Ranch, David stripped the frame; inspected the welds, rivets, and structural integrity; prepped it for a new suspension, and applied multiple coats of John Deere black tractor paint. At 4,070 pounds, Land Cruisers are far from featherweights in the off-road world. When fully kitted and loaded with gear, tanks topped off, a navigator to your right and dog in the back, it could easily tip the scales at 6,000 pounds—enough to flatten the stock springs and render the shocks worthless. The solution was a pair of semi-elliptic Man-a-Fre Safari springs up front, a Specter heavy-duty nine-leaf set out back, and Rancho 9000 adjustable shocks at each corner. A pair of Boss Suspension air bags from Australia was added to keep the LV level when fully loaded. The result was a 3.5-inch increase in elevation, and a ride that would manage the tar road comfortably yet feel at home on the remote two-track.

Under the bonnet and unsprung weight 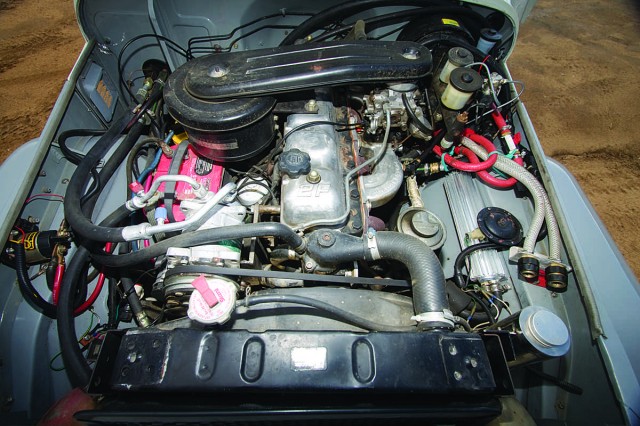 The ‘60s and ‘70s brought many improvements to the Land Cruiser platform: Disk brakes, more powerful motors, synchronized transmissions, and fine-splined drive train components. Fortunately for David, one of his other rigs, a ‘79 FJ55 with a dire case of body cancer, was ready to live on via the LV. The 55’s front axle was fitted with 62-Series fine-spline 4:11 gears and a pair of vented and drilled brake disks from DBA (Australia). To accommodate a cable-actuated emergency brake, David sourced a 1981 rear housing, re-geared it, and mounted it with greasable shackles. Capping all four corners is a set of six-ply 33/9.5/R15 BFGoodrich All-Terrains fitted to the OEM wheels. 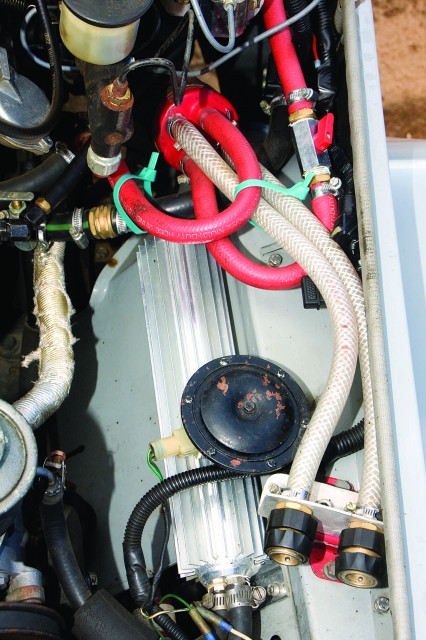 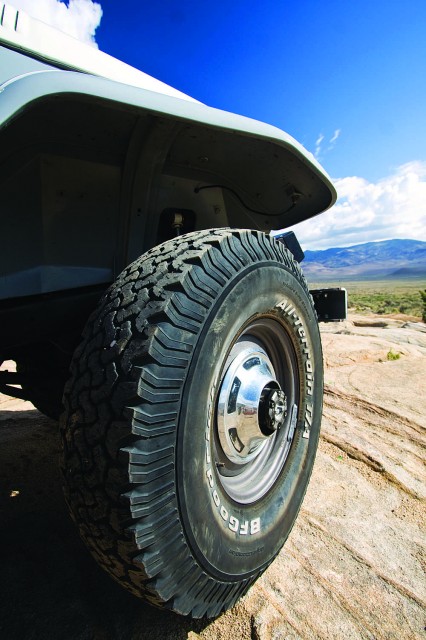 Under the bonnet, the original 3.9-liter F-Series engine was upgraded with a more powerful 4.2-liter 2F motor from the donor FJ55. To maintain reliability in the backcountry, it was left in stock form with the exception of upgraded fuel and exhaust management, comprising a rebuilt carburetor from Mark’s Off Road, and a Man-a-Fre header and custom exhaust from Mom’s Muffler. Mated to the 2F is an H55 5-speed transmission with a 19-spline output shaft and a 1979 transfer case. With the new firewall in place, the late-model brake and clutch master cylinders bolted in with a clean factory appearance. The ensemble was brought to life with a pair of Optima batteries managed by National Luna dual-battery controls and a Painless wiring harness. 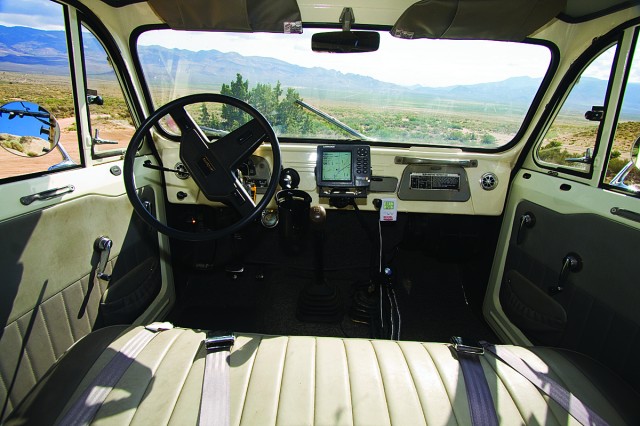 As we approached the track to one of my old camping haunts, I glanced across the instrument panel and interior. Its attitude was that of an acclaimed thoroughbred—clean lines, immaculately groomed, yet with an air of tenacious determination—akin to a one-time Preakness winner granted a second chance to run for the money. The Lowrance Baja 540c GPS scrolled to W39°50’59” N119°44’25”, and the subtle whine of the synchromesh gears beneath us faded as we slowed to make the turn.

During the aforementioned body, frame, and drivetrain work, the interior was being addressed by The Body Shop in Atascadero, California. A new headliner and carpet set, also from Specter Off Road, along with new door seals, were fitted to the newly refurbished body. The ailing bench seat needed a complete makeover and re-skin, after which it was fitted with new belts. Visors, door panels, and tailgate were also in the operating room queue, pulling through with strong vitals and a second chance at life. 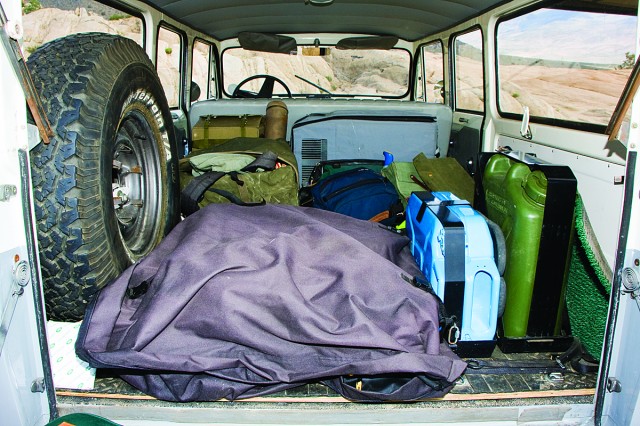 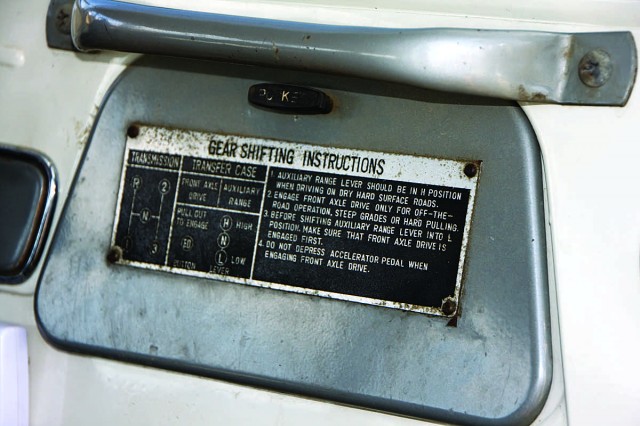 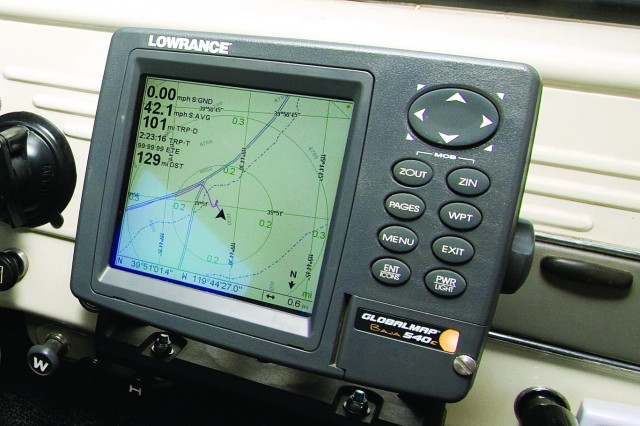 Although the LV came with a rear heater, the rear seat had been removed, so David replaced the heater with a 120V inverter, accessory fuse panel, and a small bank of 12V power outlets. To maintain the visual integrity of the dash panel, equipment such as the GPS and Engel fridge monitor are on suction-cup mounts. Even the stereo and new AC system are hidden from view (sourced from Old Air and Vintage Air Products if you’re in need).

Home away from home 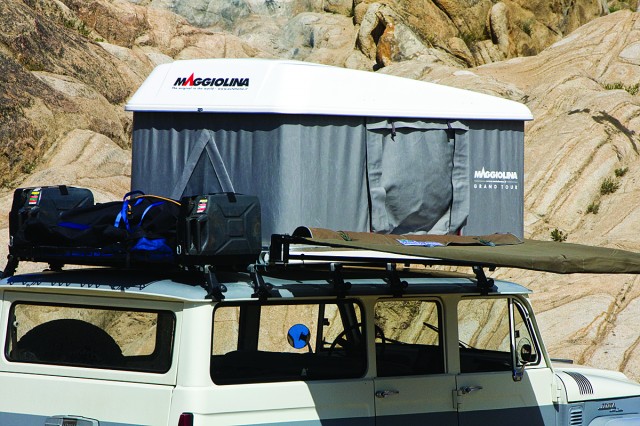 Knowing that the LV would be his primary abode during extended treks through the western U.S., David needed to select gear that was reliable, functional, and compact. The LV’s rain gutters provided a sturdy foundation for an array of Yakima load bars, to which David mounted a Magiolina roof-top tent and a Yakima cargo basket. For those scorching Death Valley days when you can stop for a mid-day egg fry at any given rock, David located an old-style Hannibal awning on eBay. Keeping those eggs and other perishables fresh is an Engel 45 fridge, coupled with Engel’s dash-mounted monitoring system. For proper hygiene during extended forays, a Helton hot water shower was fitted under the bonnet, and 10 gallons of water ride on the rear deck. Two rack-mounted Expeditionware NATO fuel cans extend the LV’s trail range, while a Warn M8000 fitted to a Man-a-Fre HFS front bumper stands ready for the unexpected bog or downed tree. When back on the tar road, a Master Flow 1050 portable compressor manages airing up the tires. 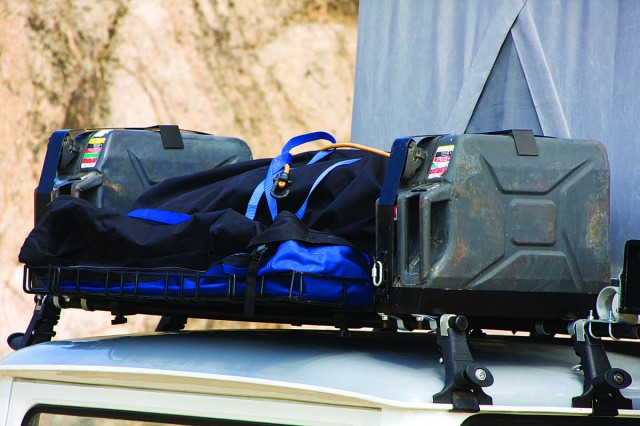 Jonathan Hanson and I initially spotted this impeccable work of art—and we don’t mean yard art—at the 2009 Overland Expo. After crawling underneath and poking our heads inside (not to mention doing a bit of drooling), we knew it needed to grace the pages of Overland Journal. Every facet of the LV’s reincarnation was done with forethought and compassion, and without compromise in either elbow grease or economics. Six years after that long drive from Wyoming, this FJ45LV was again tooling around the lonely two-tracks of the Grand Canyon, Death Valley, and the eastern Sierra Nevada. A Wyoming man’s yard art had been transformed into a California man’s treasure.

When I asked David how much it would take for him to part with it, he just smiled and laughed.

What was I thinking? 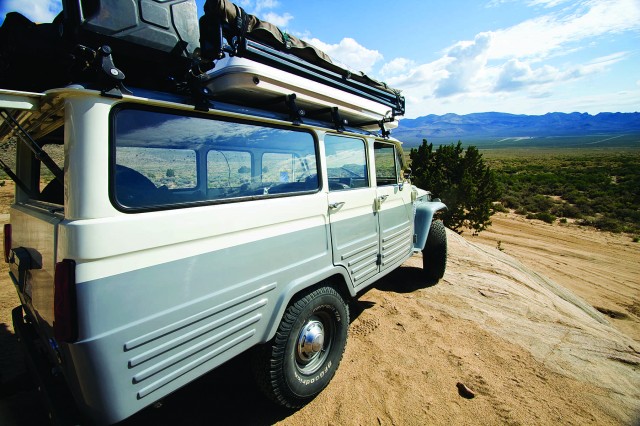