Most new entries into the motorcycle world seem to take years to gain momentum. Consumers are hard parted with their dollars and don’t make purchases without a great deal of research and vetting. When Mosko Moto started hitting trade shows and events to promote their new line of soft luggage, all of that went out the window. Riders threw their cash at Mosko Moto as fast as they could. That was just a few years ago. Now you can’t swing a dead cat and not hit one of their bag systems.

One of the things to fuel the rapid evolution of the Mosko Moto bag line, aside from the extensive experience of founders Pete and Andrew as designers and adventure riders, is the open-source feedback of the design process. As their products started to venture onto the open roads of the globe, riders began offering suggestions to improve the bag systems. Because Mosko is a small company, those changes were implemented quickly. It’s that respect for the customer experience which has allowed the brand to dominate the soft luggage market in what seems like the blink of an eye.

I recently had a chance to test two of their most popular systems: the Backcountry 40L Duffel/Pack and the Reckless 80L System. Normally those two products would not travel on the same machine, but since I was using them on a Ural sidecar, an already heavy hauler, I went ahead and splurged.

One of the most innovative bags I’ve ever evaluated, the Backcountry kept presenting neat little features the further I dug into it. I’m a tough critic and one of my common quibbles is over-engineering. The Backcountry has potential to seem overly complicated but in use it is clean, versatile, and clearly a great deal of real-world usage and tweaking went into the final product. 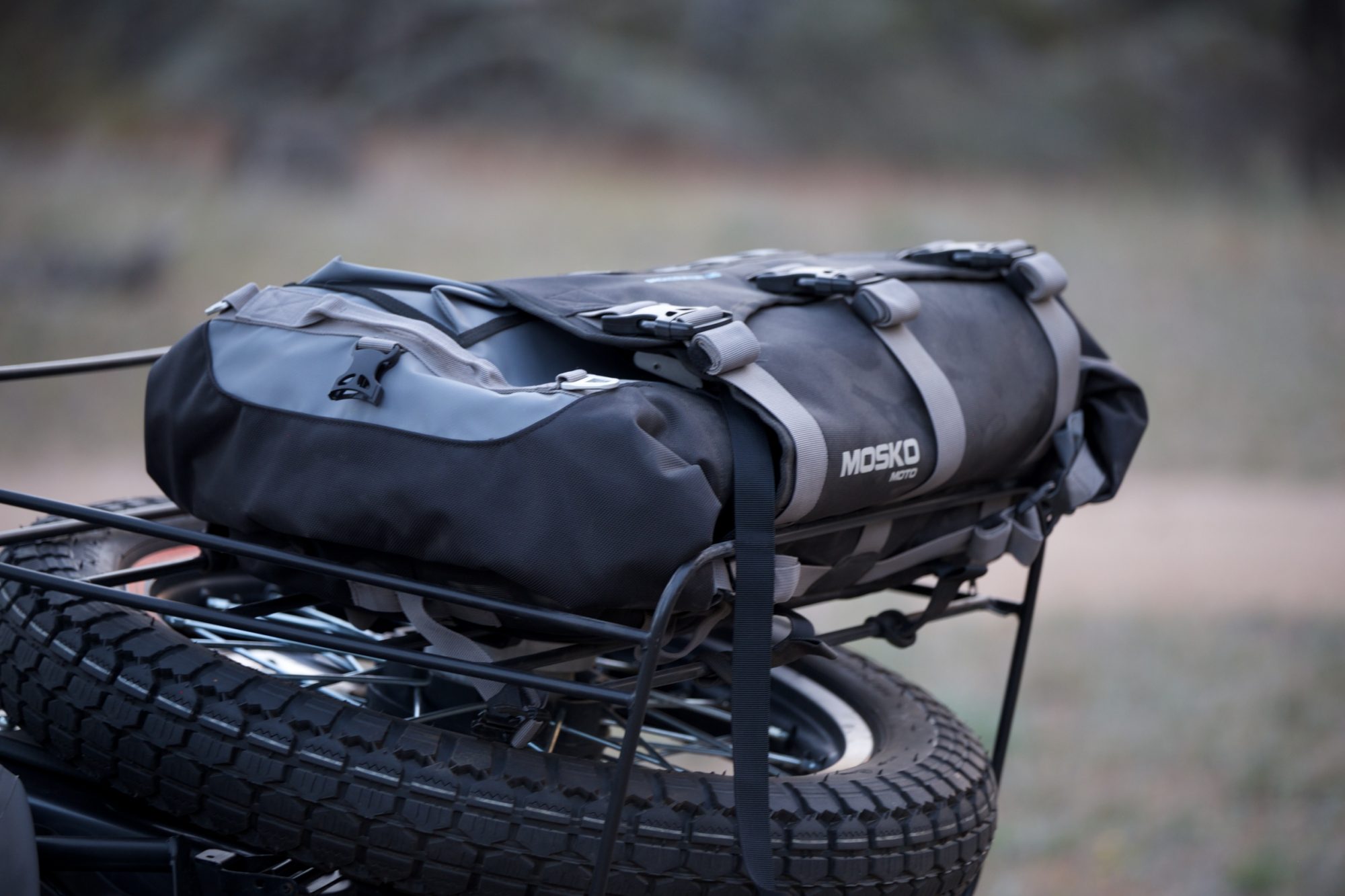 The core of the Backcountry is a 40-liter waterproof inner bag with dual roll-top closures at either end. Wrapped around that is a durable 1000-denier shell festooned with anchor points, handles, and compression straps. Releasing the three main buckles releases the heavily reinforced beaver tail compression system exposing an inner mesh pocket, clear plastic map pouch, and even a tent pole sleeve. The beaver tail system greatly increases the versatility of the Backcountry bag and easily wraps around my camera tripod and even secured a 10-liter MSR Dromedary bag with a tenacious hold. 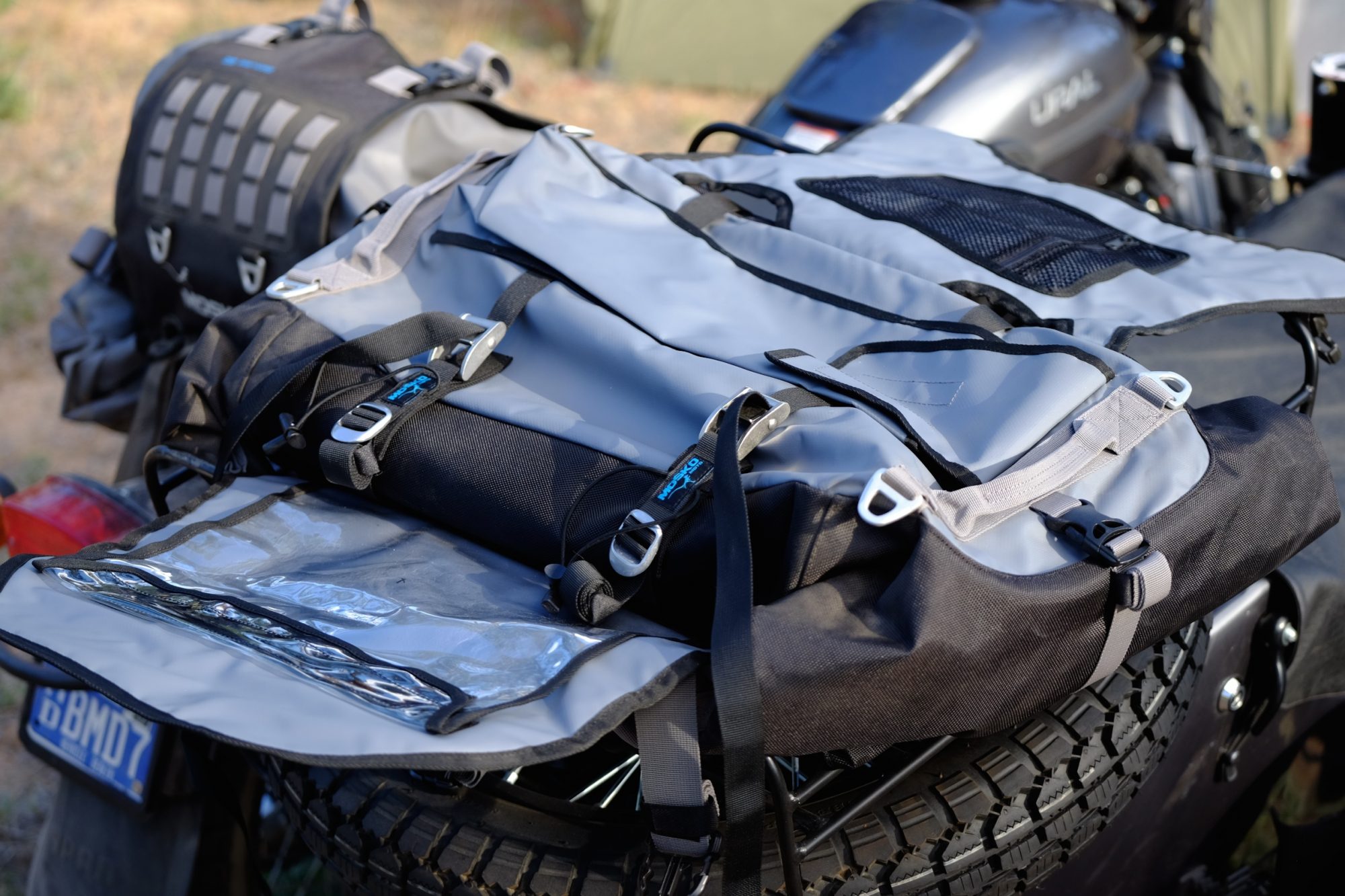 Beneath the bag hides the Backcountry’s best attribute: backpack straps. Although the system includes hard points to secure a shoulder strap for carry as a duffel, the built-in pack straps make for the most comfortable portage. As a fly-and-ride bag it’s tough to beat, particularly given the dimensions which fit within most airline carry-on regs. One of the inherent challenges with any top-mounted bag is getting it attached to the motorcycle and the Backcountry offers a bevy of mounting options; the most steadfast is provided by Mosko’s own Backcountry Cinch Strap system. It has the adjustability and brawn required to survive long and arduous trips.

I have a love/hate relationship with most soft pannier systems and it leans more toward the latter end of that scale. The Reckless bags avoid the common foibles suffered by many panniers. The foundation of the system is a sturdy yoke-shaped holster which secures two waterproof, roll-top side bags, and one top bag. The elongated dry bags on the flanks can be removed from the holsters with the simple release of a buckle and feature a clear window so you can see what lurks in your bag. It also allows light into the lower extremes of the bags so you can see all the way into the bottom and not just into a black abyss. Small pockets built into the lower aspect of the holster assembly are perfectly sized for quick access items like fuel bottles, repair kits, and other essentials. 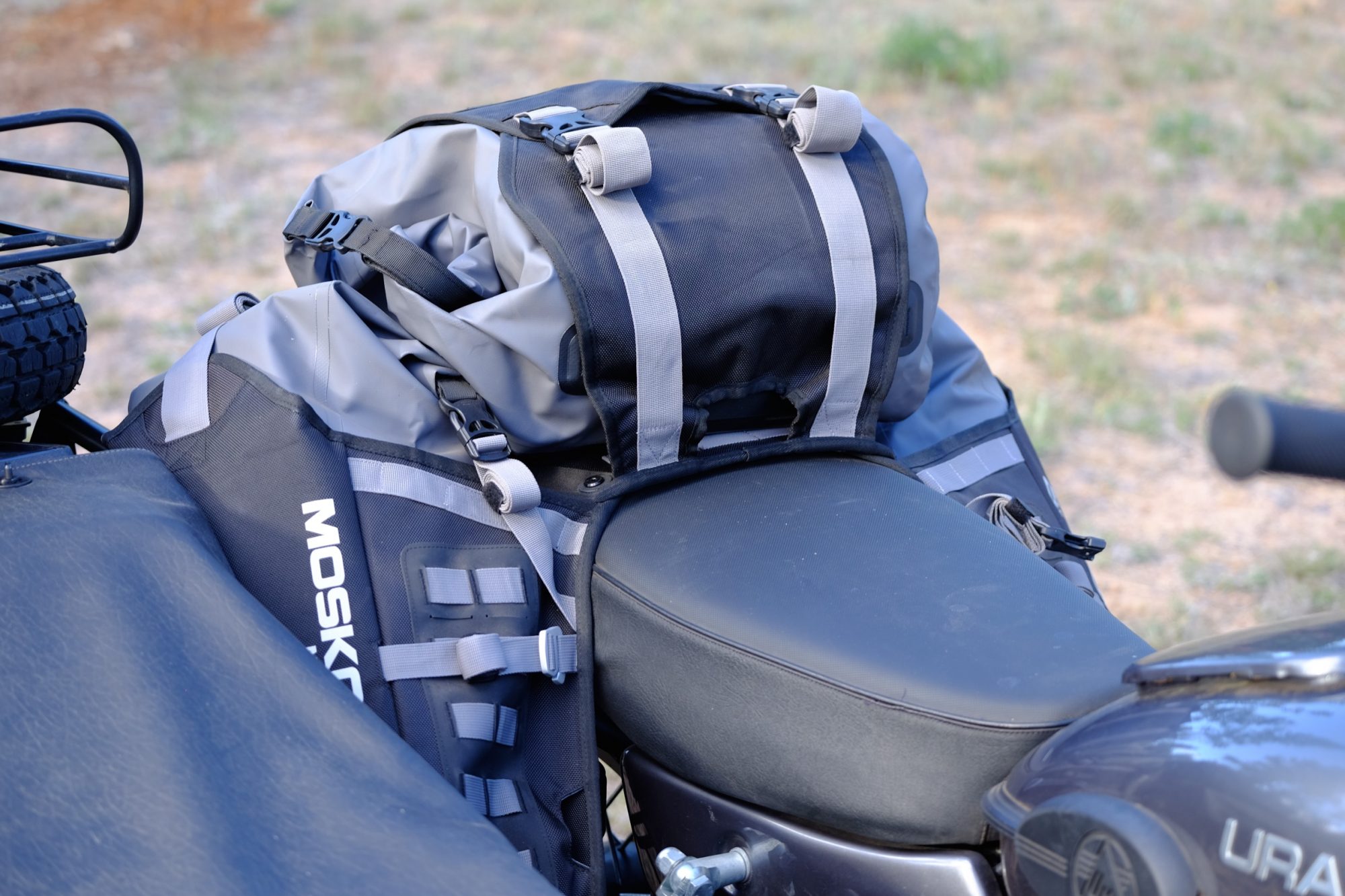 The top bag is held to the Reckless harness with a two-fold beaver tail system much like that employed on the Backcountry bag. It too has a mesh accessory pocket and a clear map and document pouch. The Stinger 22 roll-top bag in the center is made of the same heavy welded PVC fabric as the side bags and includes grab handles and a clear pocket for maps and documents. Better still, a panel on the backside of the bag includes two mesh backpack straps. With the release of just three buckles, the Stinger 22 bag can be deployed as a backpack for a walk about town. 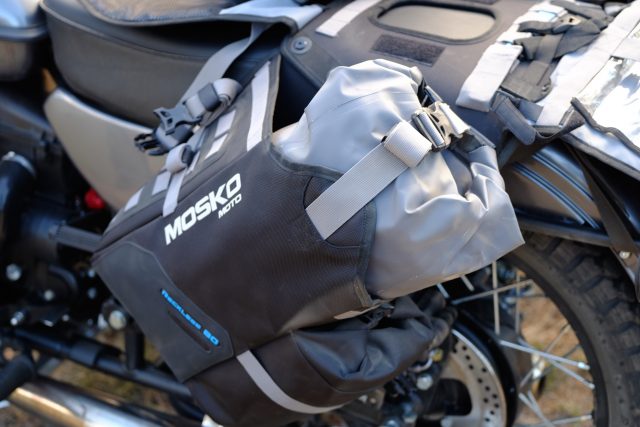 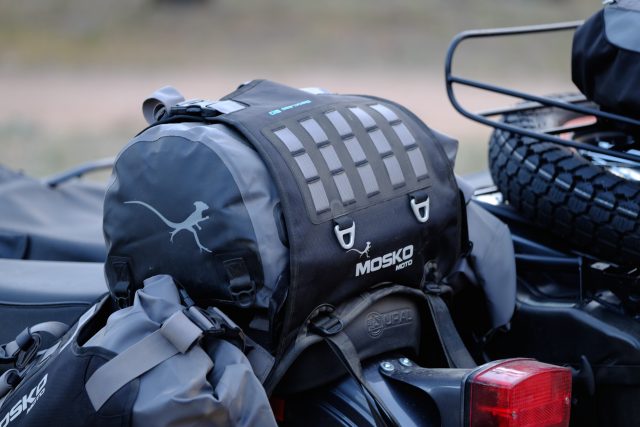 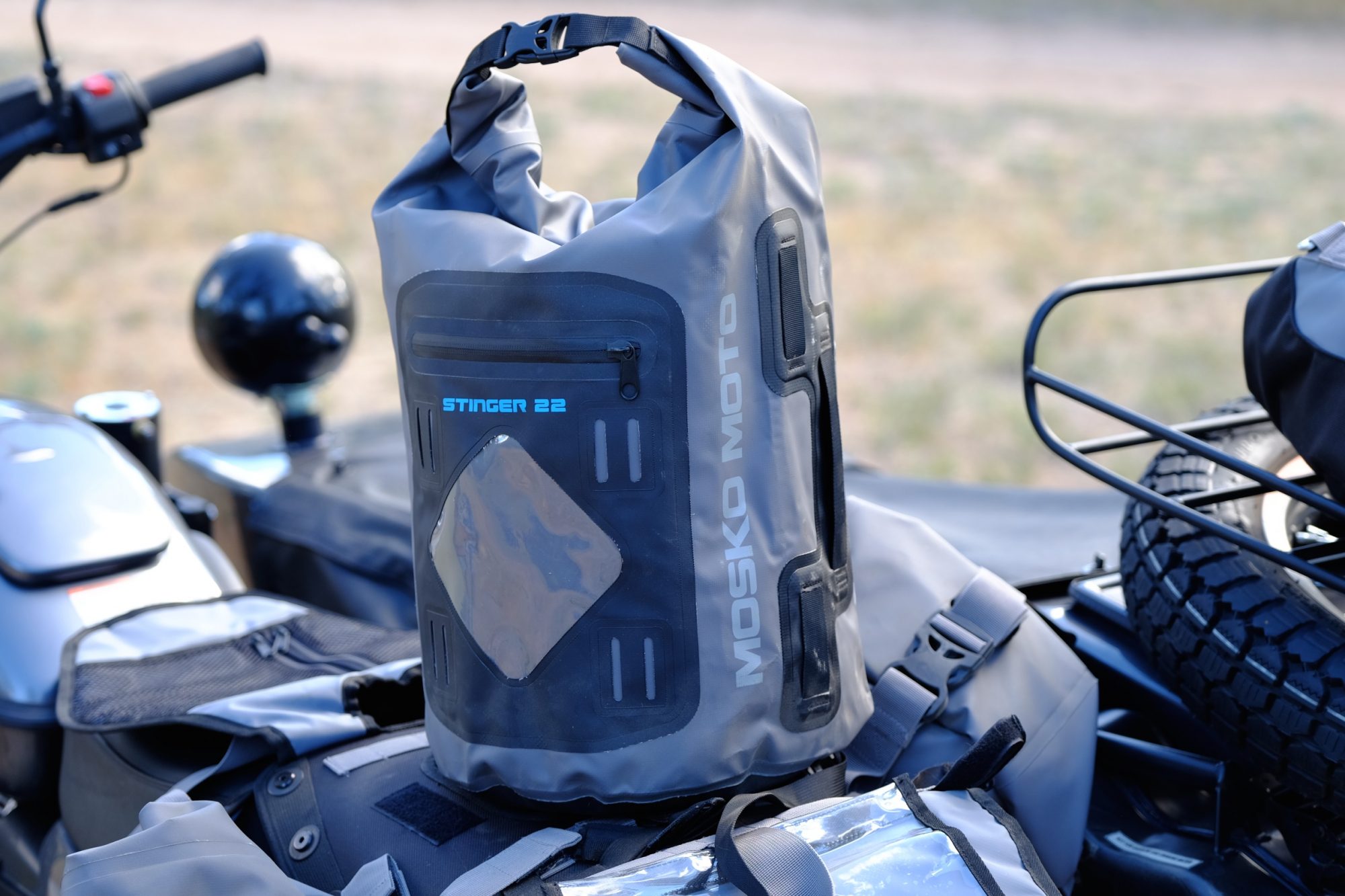 Like all Mosko bag systems, the extensive Molle attachment options permit the addition of smaller bags and accessories including bottle holsters, tool rolls, and pouches. Optional locking straps ensure would-be thieves are dissuaded from nicking your kit and the modular aspect of each bag system means damaged pieces can be quickly replaced without a need to buy everything anew. 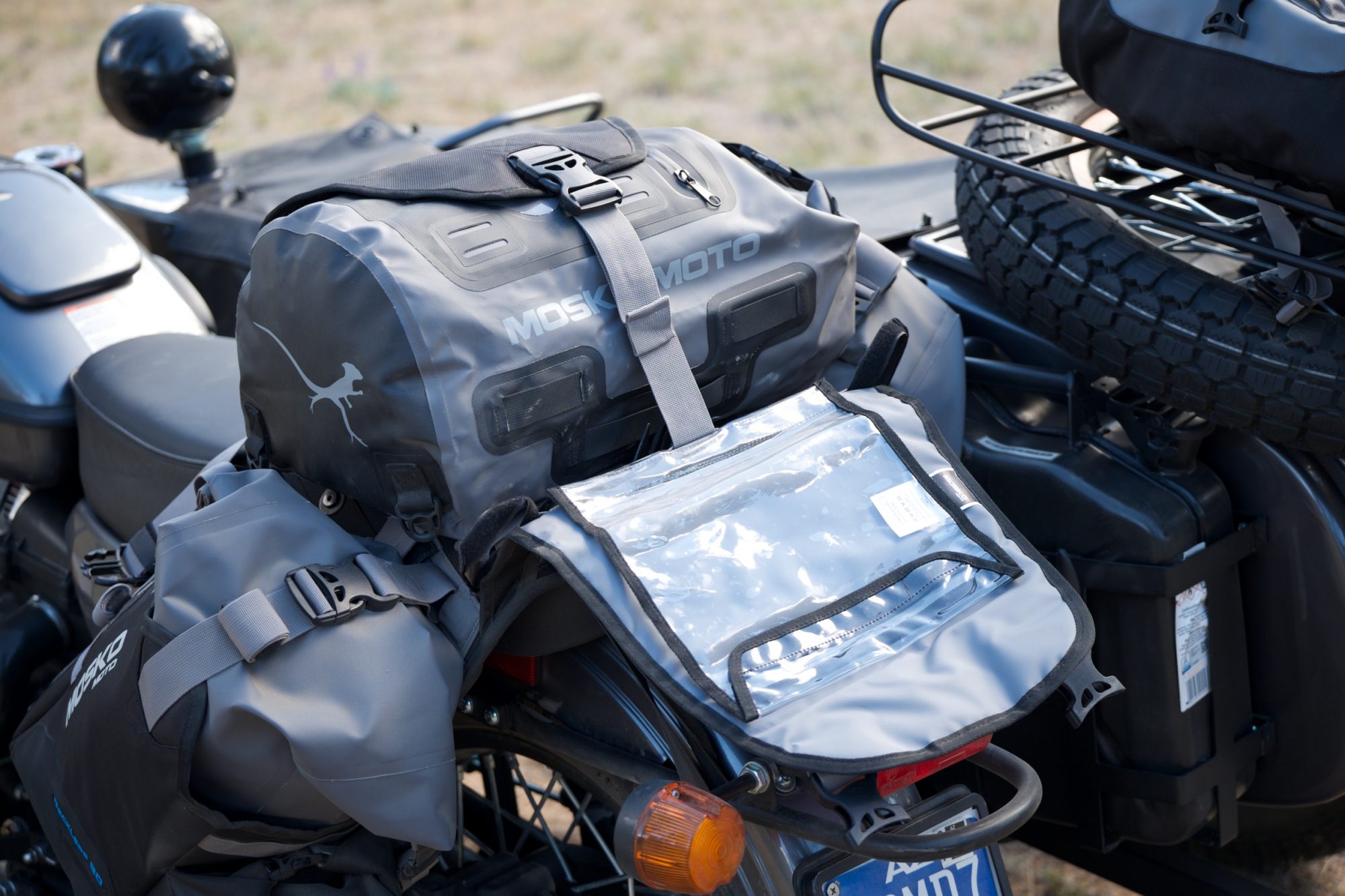 In the years since Mosko Moto started outfitting riders I’ve had the opportunity to ask several people how they like their bags. I hear nothing but rave reviews and I can see why. No details have been overlooked. After just a long weekend playing with the Backcountry and Reckless systems, I wanted to load them up in earnest and head to the edges of the map. www.moskomoto.com