Every vehicle has a story, some born from necessity, some from vanity, and some even from tragedy. For Walt Wagner, owner of Tactical Application Vehicles (TAV) in New Mexico, it was the loss of his cousin, Vincent, in 2013 that inspired this project. When Vincent passed away, Walt offered to purchase his much-loved 2009 Tacoma from his cousin’s wife. After obtaining the truck, TAV started the process of honoring Walt’s family in a unique way, by bringing their elite unit experience, credibility, and functionality to existence as a best-practice vehicle build.

Vincent and Walt were first cousins and very close. According to Walt, “Vincent went into the US Army and wanted to be a Ranger, accomplishing that and then some at a very young age. By the time he got out of the army, he had several deployments overseas where he was a HALO-certified member of long-range surveillance detachment (LRSD). When Vincent showed up to his new LRSD unit with a beard (you’re not supposed to do that), they nicknamed him Goat. That name stuck with him even after he left the army and started working with me doing nuclear security. It was there he picked up the name Ranger Goat.” Vincent and Walt worked as federal agents for about four years before “Vincent had an opportunity to contract overseas as a shooter medic. That allowed him to put some money away for his wife and two little girls. After that, he decided to stay home where it was safe and pursue a nursing degree. One night, after wrestling around a little with his daughters and kissing them goodnight, he went to lay down. He passed away that night in his sleep.” 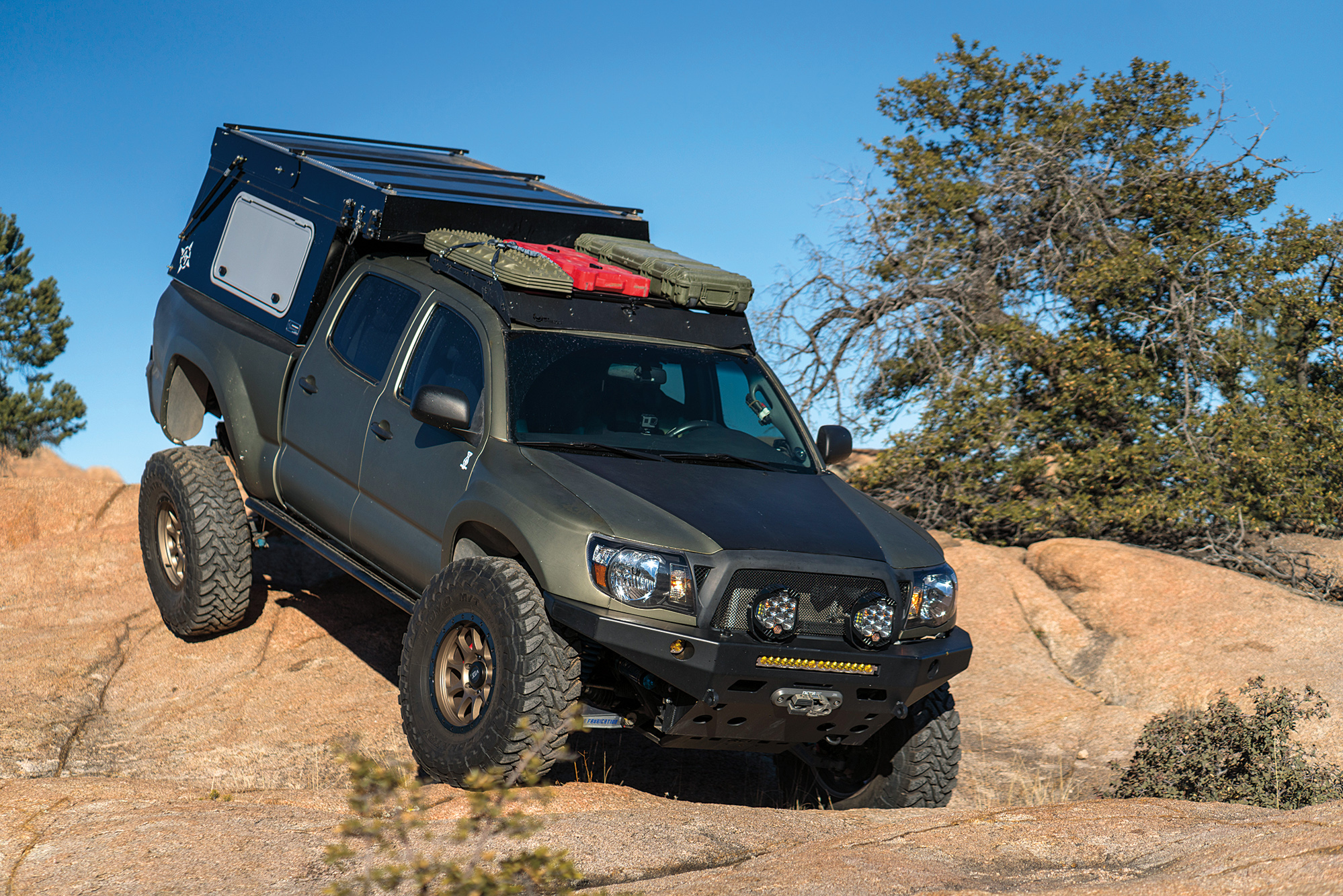 Walt has an extensive history in the military and law enforcement and this experience is evident in TAV’s builds. Walt explains that “with every one of the Toyotas we build, we focus on the mission’s needs first. The client’s long-term requirement for the vehicle gives us the foundation to build in the details, addressing everything from spring rates and shock valving to creature comforts in the living space on board. In the end, the client is behind the wheel of a highly capable, custom-tailored expedition vehicle suitable for daily tasks as well as multi-week adventures.”

FOUNDATION OF THE GOAT

Every overland vehicle is only as good as the base vehicle it is built upon, and there are few North American platforms as respected as the Toyota Tacoma TRD, this particular unit being a Sport 4-door long-bed. The stock 4.0L V6 was augmented with a Magnuson supercharger, the results of which significantly increased horsepower and torque, and added that classic gear spooling whine. It is typically best to leave an engine stock, but Walt has found this unit to be reliable with long-term use. The results are impressive, and with the 5.29:1 axle gearing, I watched Walt drift this truck the length of a football field on private property outside of Tucson, Arizona. Acceleration is strong, and the boost helps mitigate loss at higher elevations. To accommodate the increased power and 37-inch tires, the TAV team specified a 69-inch Currie F9 rear axle. The wider track width helps to offset the higher center of gravity, and the stronger housing ensures the Tacoma can bear a full payload. To match the rear, a Total Chaos 3.5+ inch, long-travel front suspension was installed, along with longer RCV axle shafts. 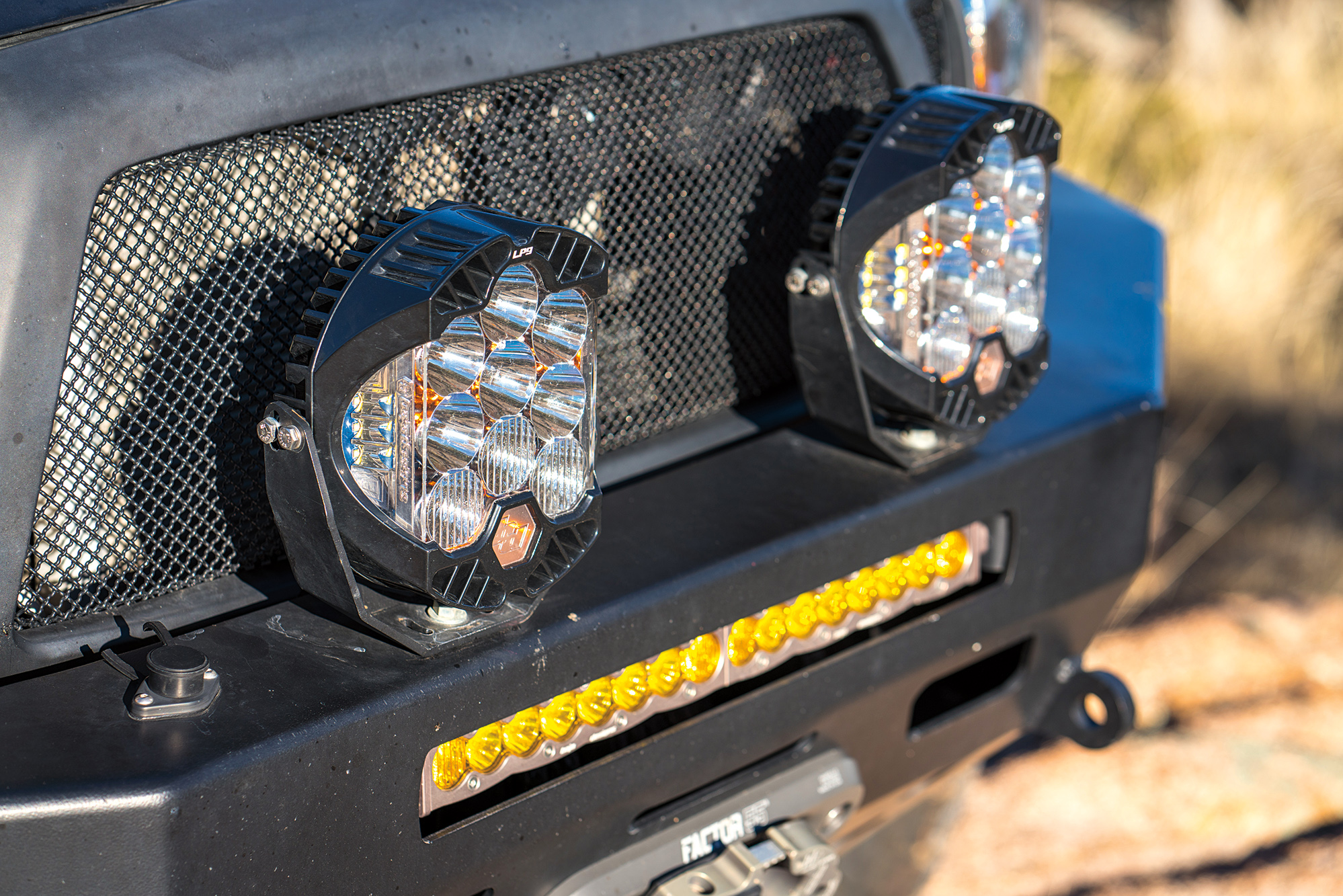 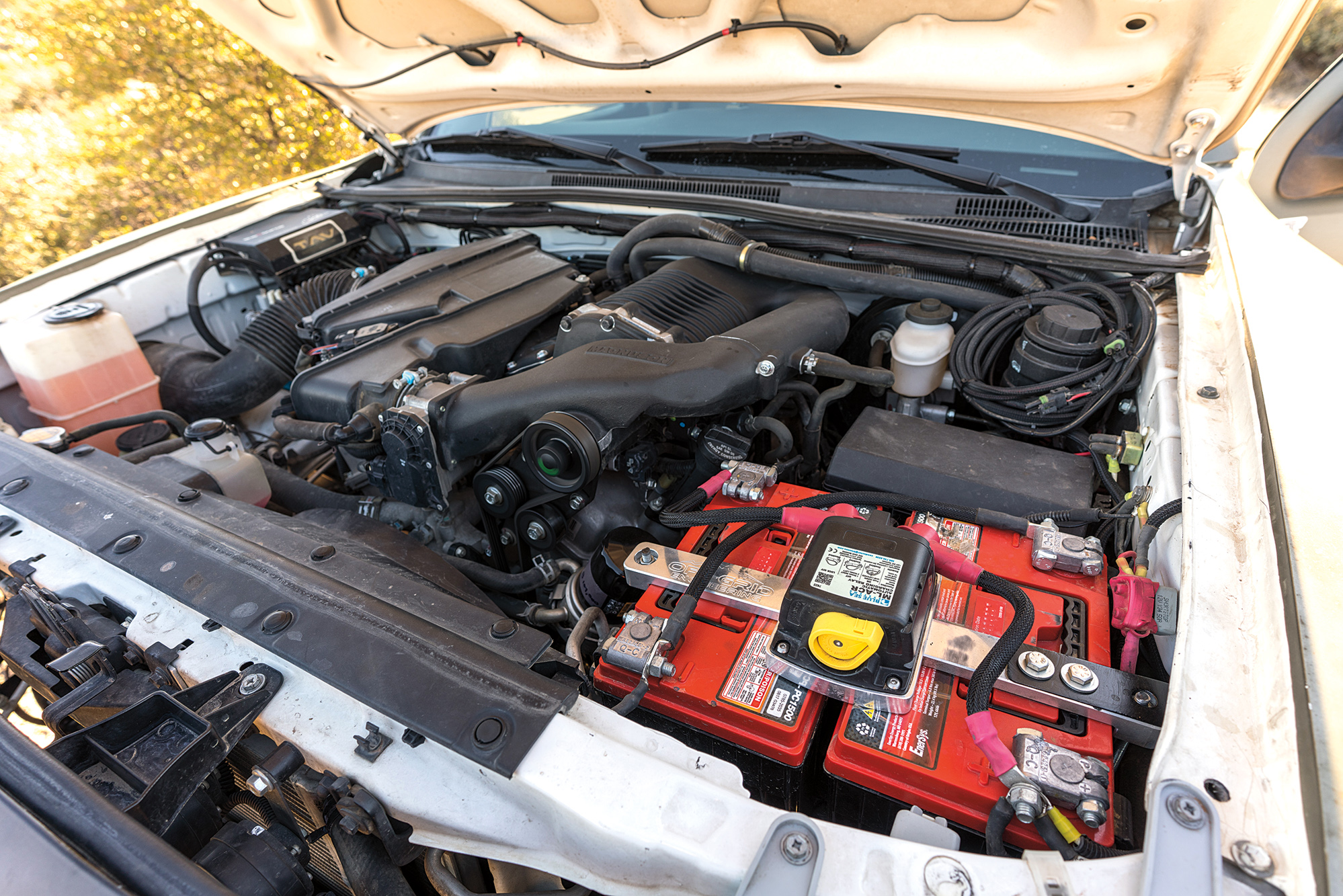 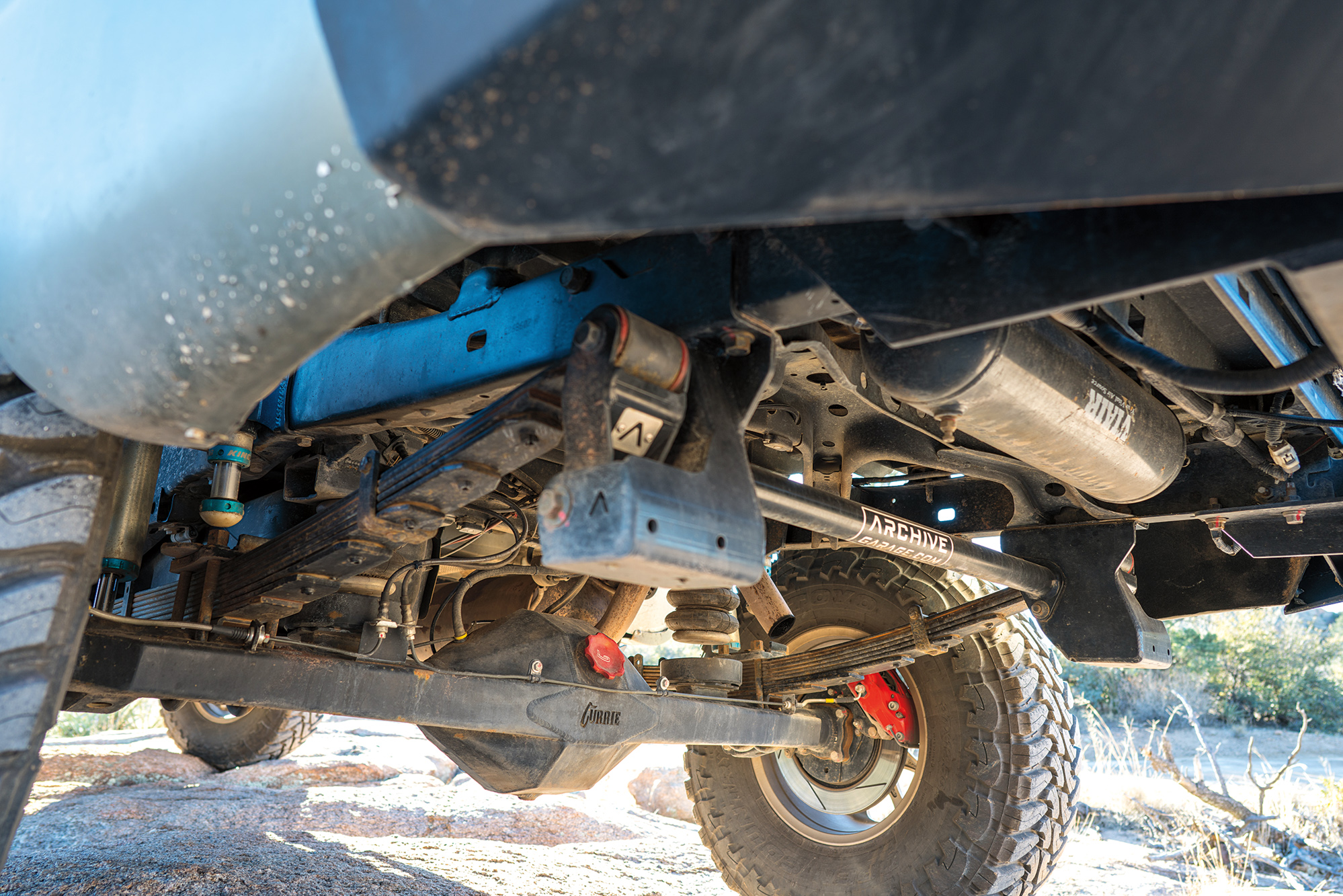 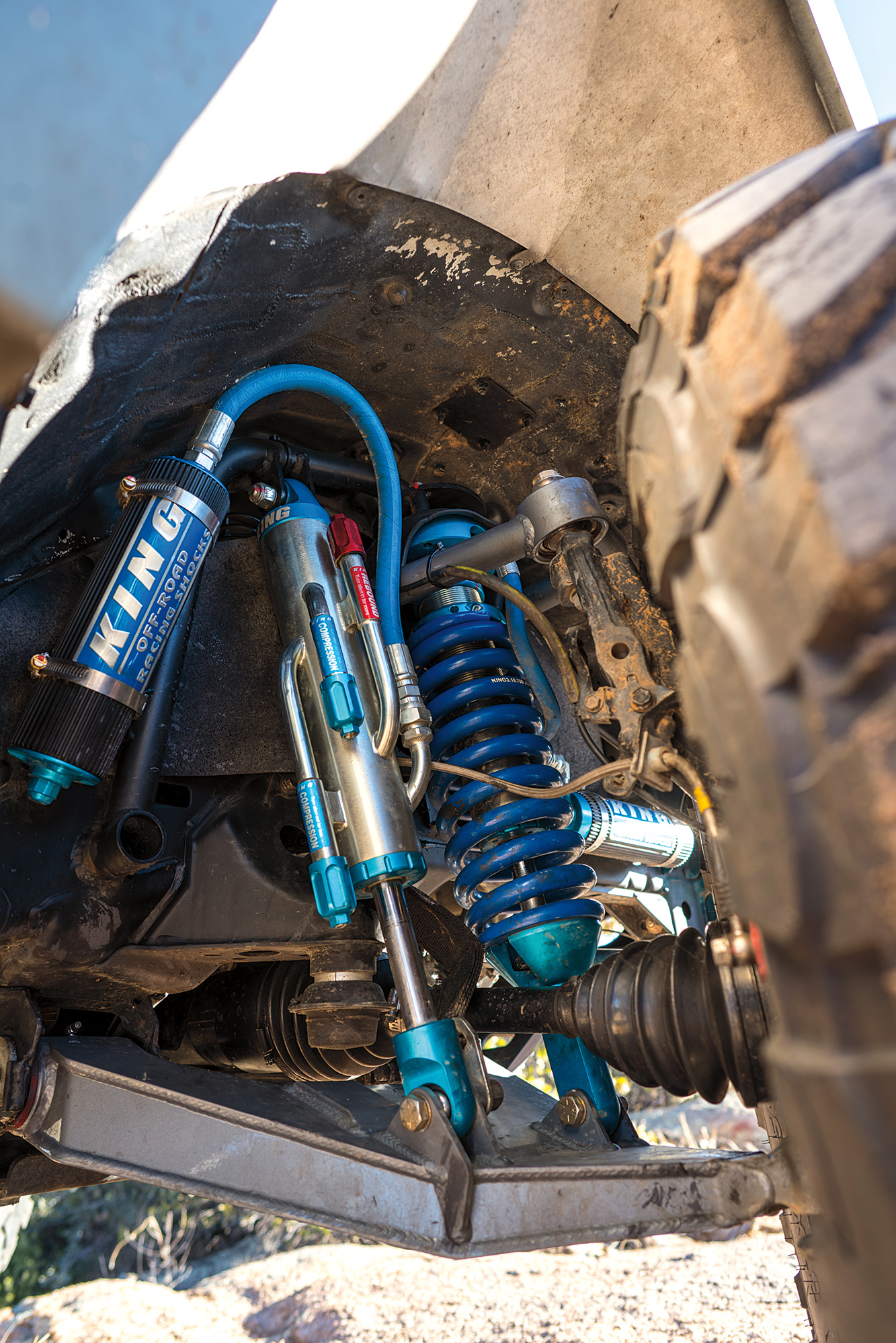 This Tacoma is not just a trail monster, but also an exploration platform. To support Walt’s overland excursions, he installed an Adventure Trailers Overland Habitat camper, and organized the interior with a series of Wolf Packs, a Yeti cooler, and a few Triple Aught Design duffels. Thoughtful details continue to the cab, with a Rammounted navigation iPad, sPod control panel to operate auxiliary lights, a simplex VHF radio, and a Sony head unit. This is easily a vehicle that can be lived out of for days or weeks at a time. 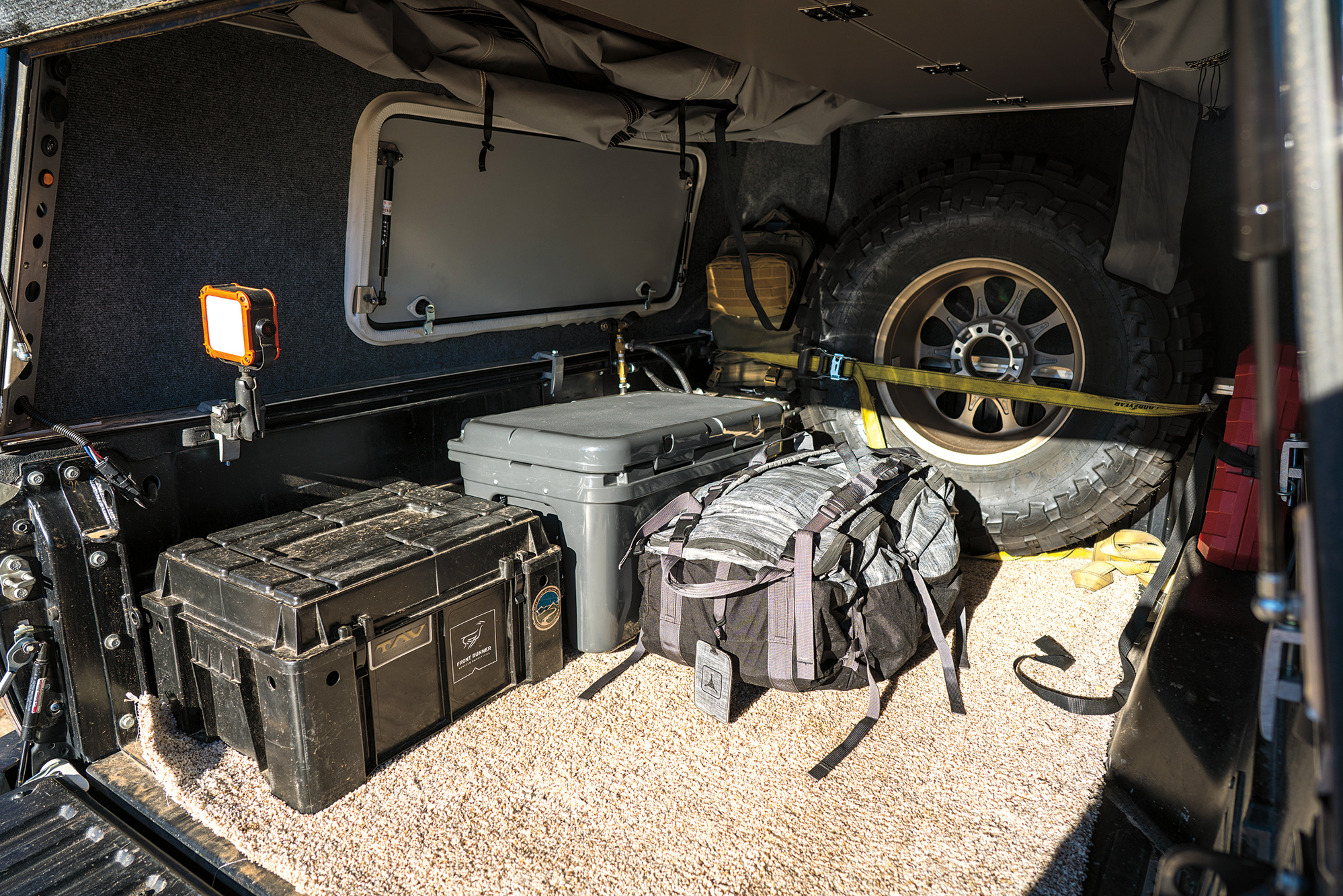 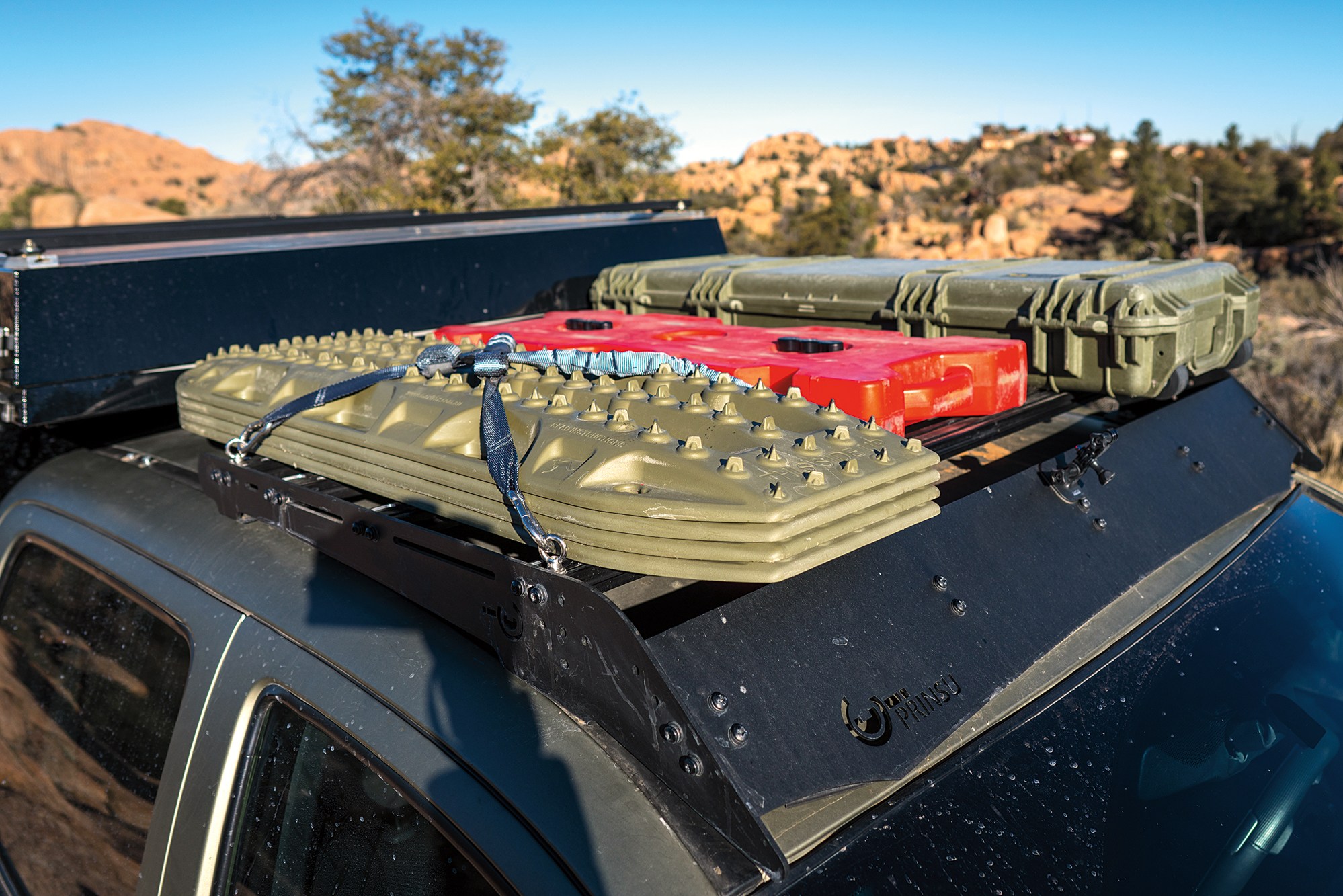 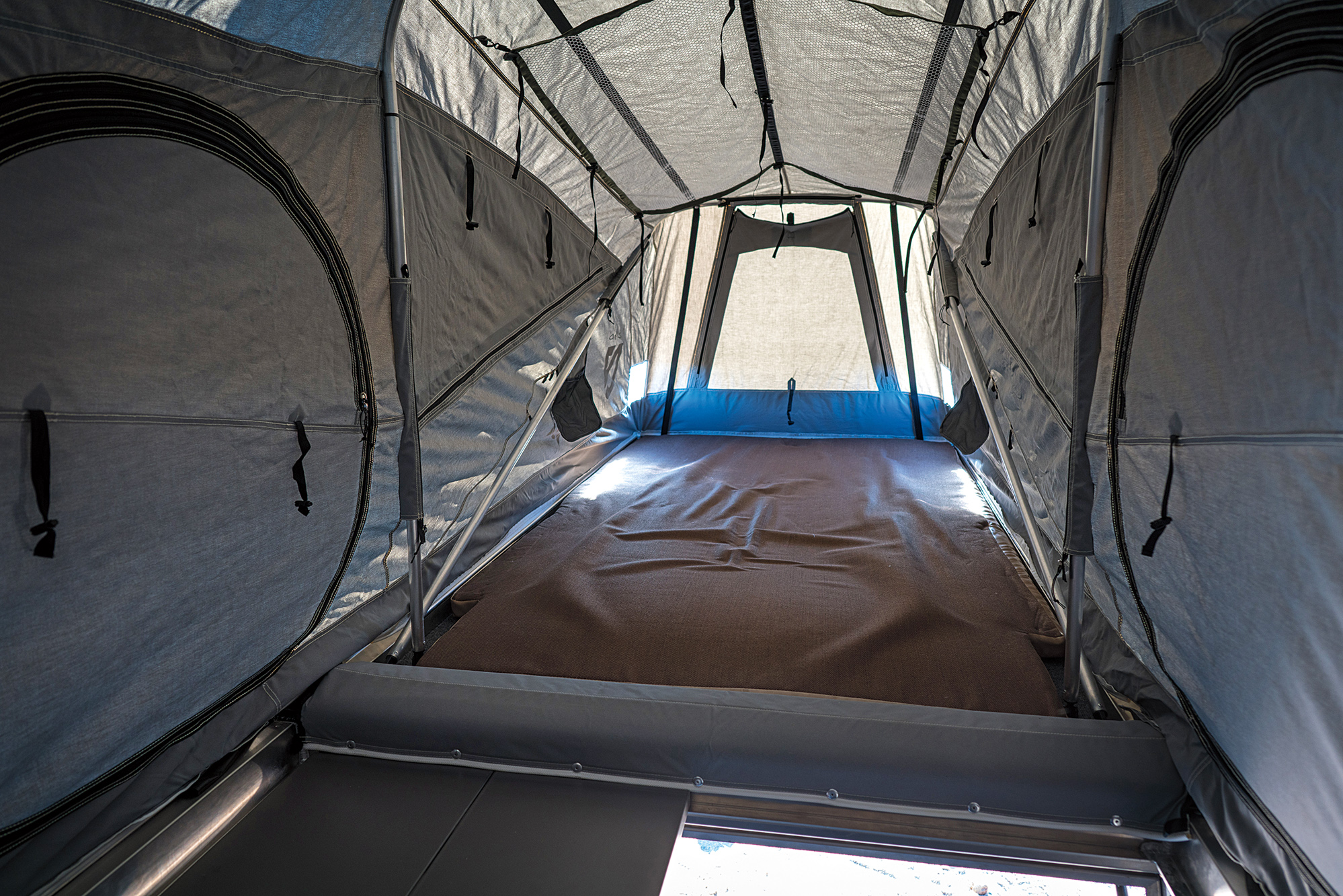 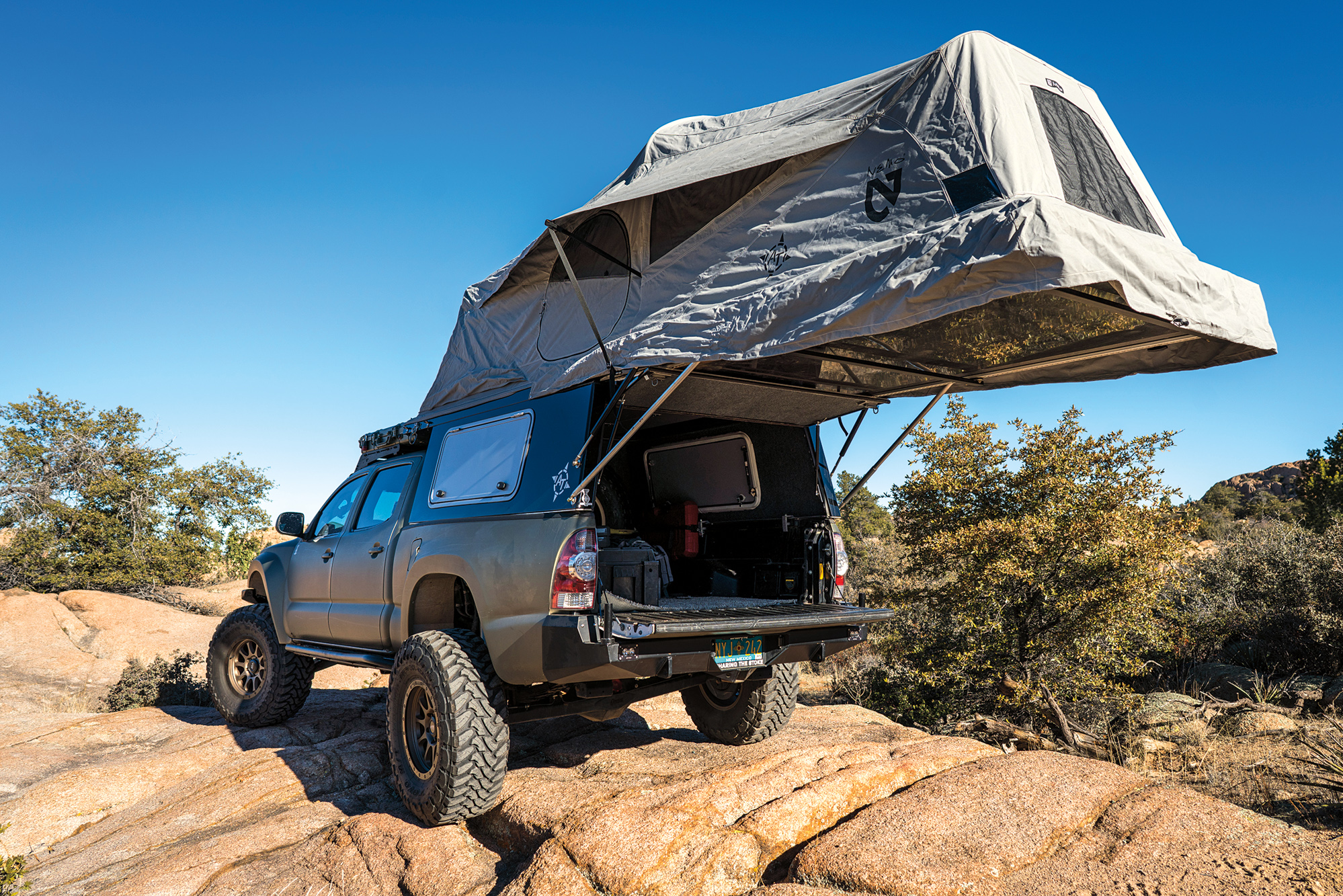 Overall, the project is an impressive reflection of TAV’s capabilities and Walt’s attention to detail. It was built to honor a beloved family member, while also remembering a fallen hero. The result is unconventional for most overland builds, but reflects what is possible when extreme technical terrain capability is a critical design consideration. I see it as a combination of overlander, rock-crawler, and high-speed desert sled, exhibiting a wide range of capability and preparedness for service—much like Walt and Vincent. 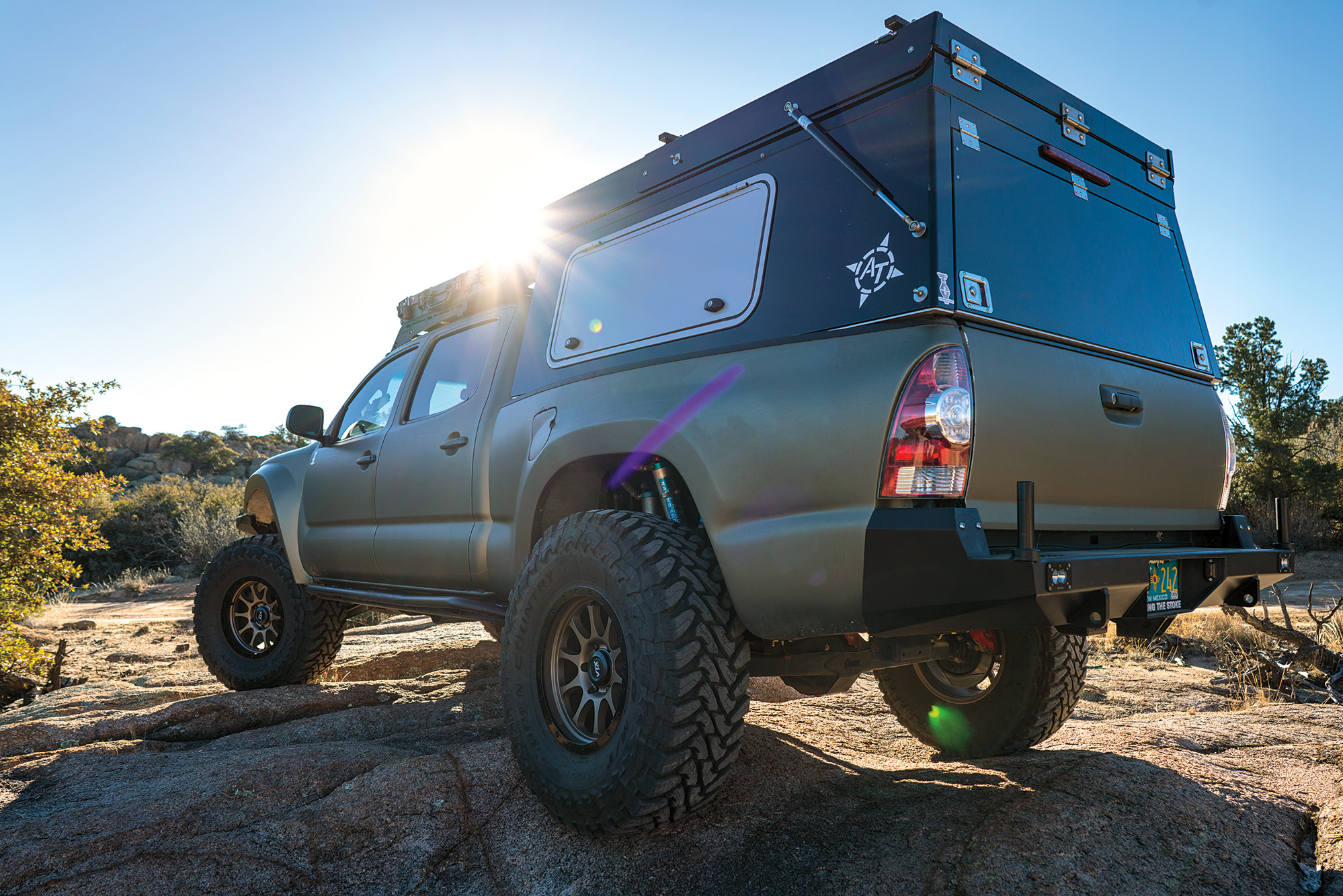 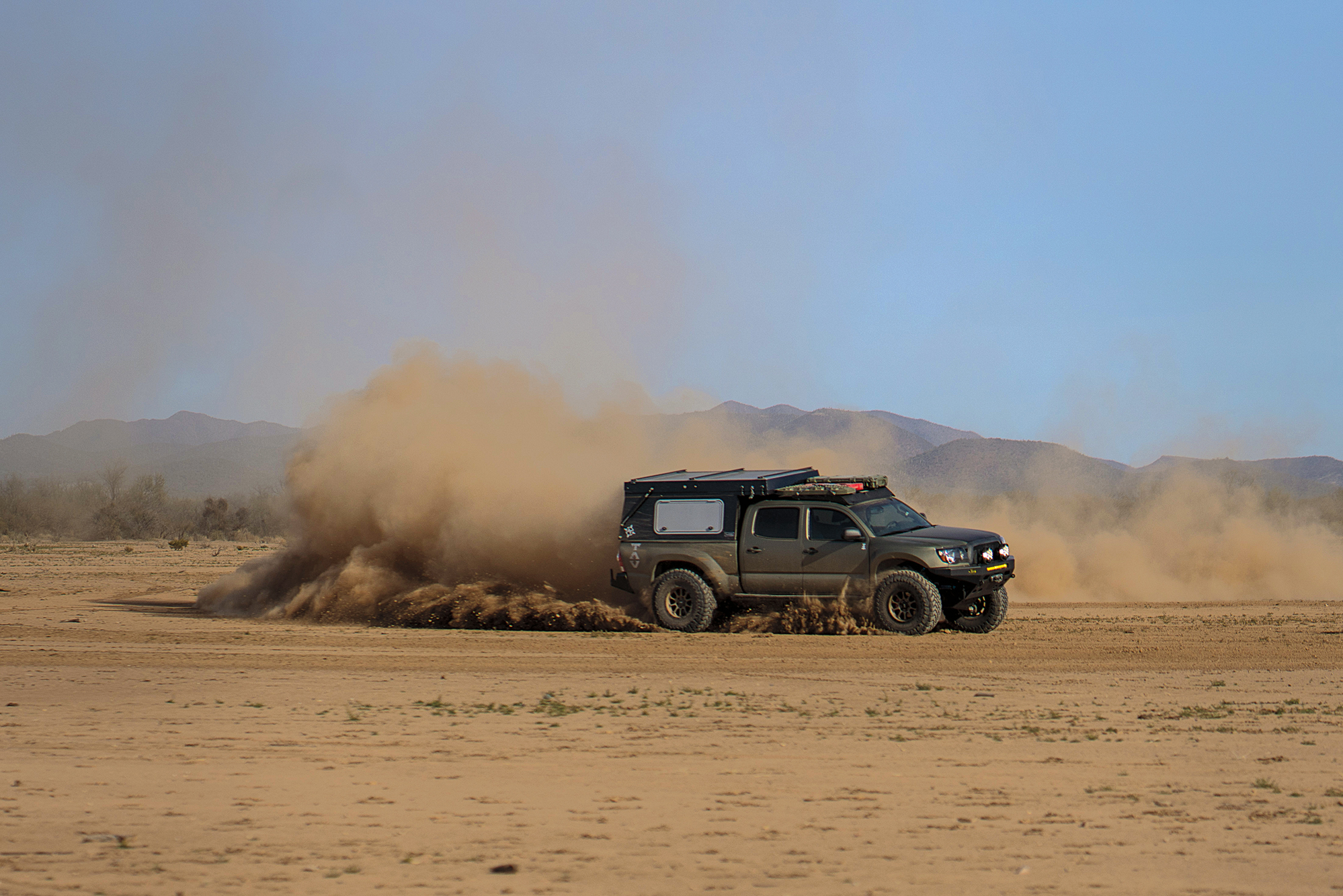