When Marcel took his wife, Chiara, out for dinner one evening back in 2015, she knew something was up. “A boat or a car, that was the question,” she laughs. “I didn’t know which one, but I knew something was coming.” Marcel’s proposal was eventually revealed—he wanted to drive around the world. Chiara agreed immediately. “It cost me a bottle of wine,” Marcel jokes. “An expensive bottle,” Chiara adds with a wink.

Collectively known as Overland Vagabond, Marcel and Chiara are amid a round-the-world overland tour in a 2016 Ford Ranger with a Geocar camper and custom-built interior. The couple has traveled from Switzerland to Iran, along the Silk Road to Singapore, through Iraq, Jordan, Egypt, and, most recently, across the Arabian Peninsula. However, the origins of the trip began nearly seven years ago, with Marcel spending countless hours researching overland vehicle platforms and builds. He acknowledges that vehicle choice is based on very personal requirements and is different for everyone. “I was looking for something that could be serviced anywhere in the world, could be put into a container, cope with all sorts of terrain, [and was] robust, durable, and reliable, offering an adequate quality of living.” 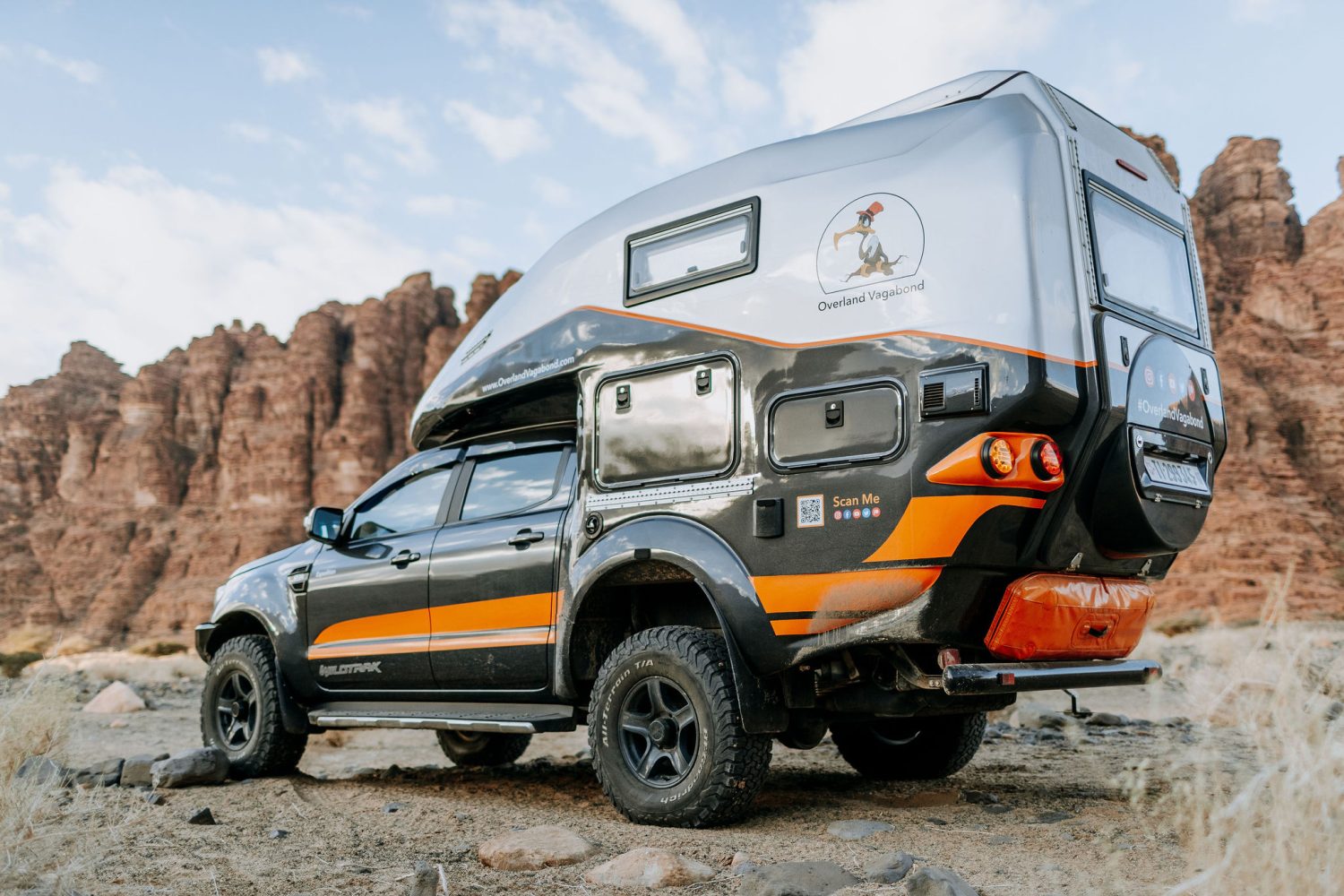 Initially, Marcel thought the Toyota Hilux would provide the best compromise between weight and space and would be an appropriate platform to replace the loading bay with a habitable cell. In 2016, instead of the usual 3-liter engine sold in Australia, Thailand, and South Africa, in Europe, Toyota released a new Hilux with a 2.4-liter engine with 150 horsepower and 400 newton-meters of torque. “I had to look for an alternative,” he says. With these requirements in mind, he and Chiara chose the 3.2-liter 6-speed Ford Ranger Wildtrack Dual Cab TDCi Auto with an automatic turbo diesel engine, 200 horsepower, and 470 newton-meters of torque.

Ever the improviser, Marcel designed and built the front and rear bumpers, the stainless-steel front grille, and an air compressor support. “I couldn’t find a support to hold the ARB air compressor for the Ranger, so I built it and mounted a power distribution box on top, underneath the hood.” The specially-made rear bumper serves dual purposes as armor and an air tank. “If I can’t get exactly what I want,” Marcel says, “I simply build it.” 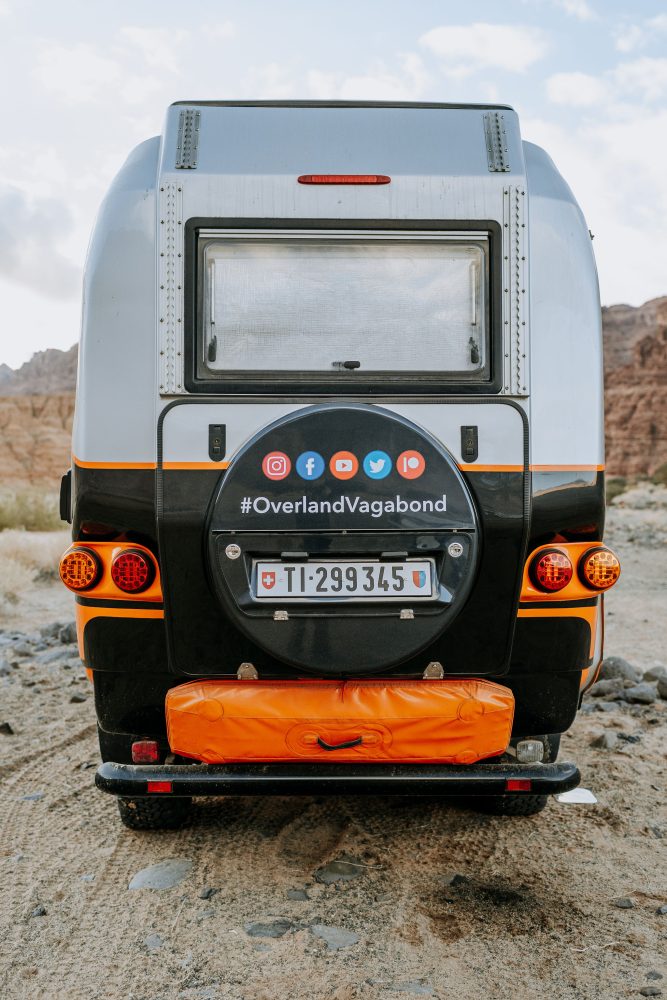 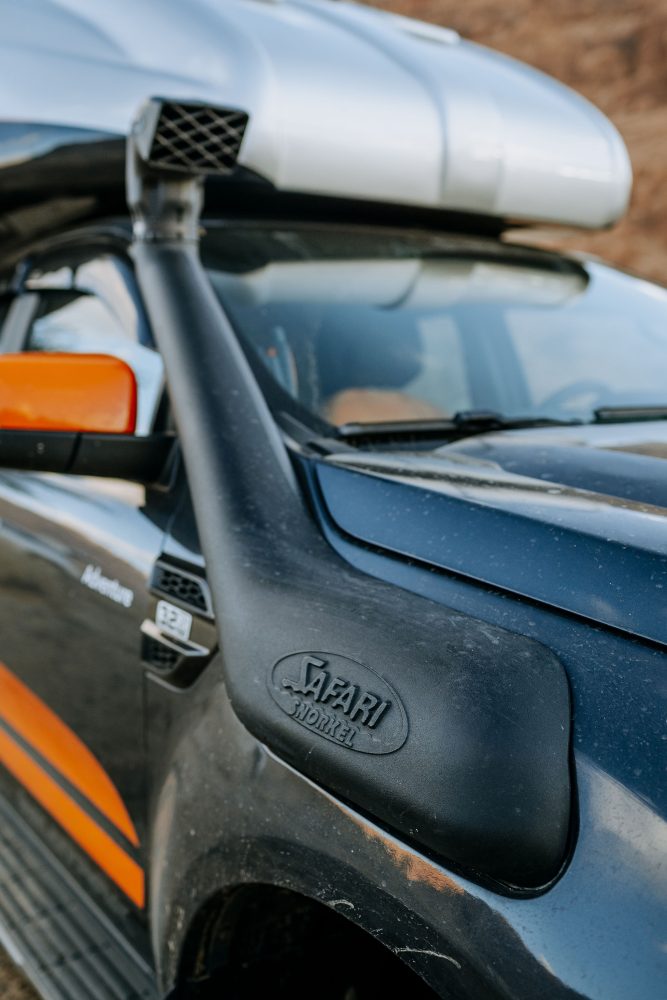 For Marcel and Chiara, a removable camper cell wasn’t in the cards. “To me, and again, this is a very personal preference, [a removable camper] is suboptimal because you have to compromise space and weight,” Marcel says. The couple wanted to replace the bed with a more permanent solution, but manufacturers who could do so in Europe formed a short list. “My choice fell to an Austrian company—Geocar,” Marcel explains. “They offer a high level of customization, and the manufacturer was open to letting me complete the interior.” The owner of Geocar, Arno Klenkhart, is a former airplane technician with a penchant for embarking on off-road trips through the Sahara. His eye for functionality and design culminated in a product that Marcel was drawn to for various reasons. “It adapted to a four-door Ranger, included a portal connecting the cabin to the cell, and has lots of windows and plenty of light. Other attractive features included a lightweight but strong and flexible composite technology designed to cope with torsion forces rather than a solid box that could be subject to stress. “[It is also] aerodynamic and cool looking,” Marcel says with a smile.

The first steps to transform Marcel and Chiara’s bare-bones living space included cleaning and painting the walls, applying foam, installing water pipes, and reinforcing the existing structure where needed. A 150-liter freshwater and a 30-liter greywater tank were installed in conjunction with a filtration system that activates during filling and when used by any appliances. To power electronics such as fans, programmable RGBW LED strips, and a set of conventional LEDs on separate circuitry, Marcel wired up a Master Volt 200Ah lithium-ion battery, a DC-DC converter, and 240 watts of flexible solar panels. “In my case, I’ve implemented most of the features and devices you would usually find in a purpose-built 7.5-ton expedition vehicle, but with the intricacy that everything needed to fit in the much-reduced space available and be super light. That was a real challenge.” 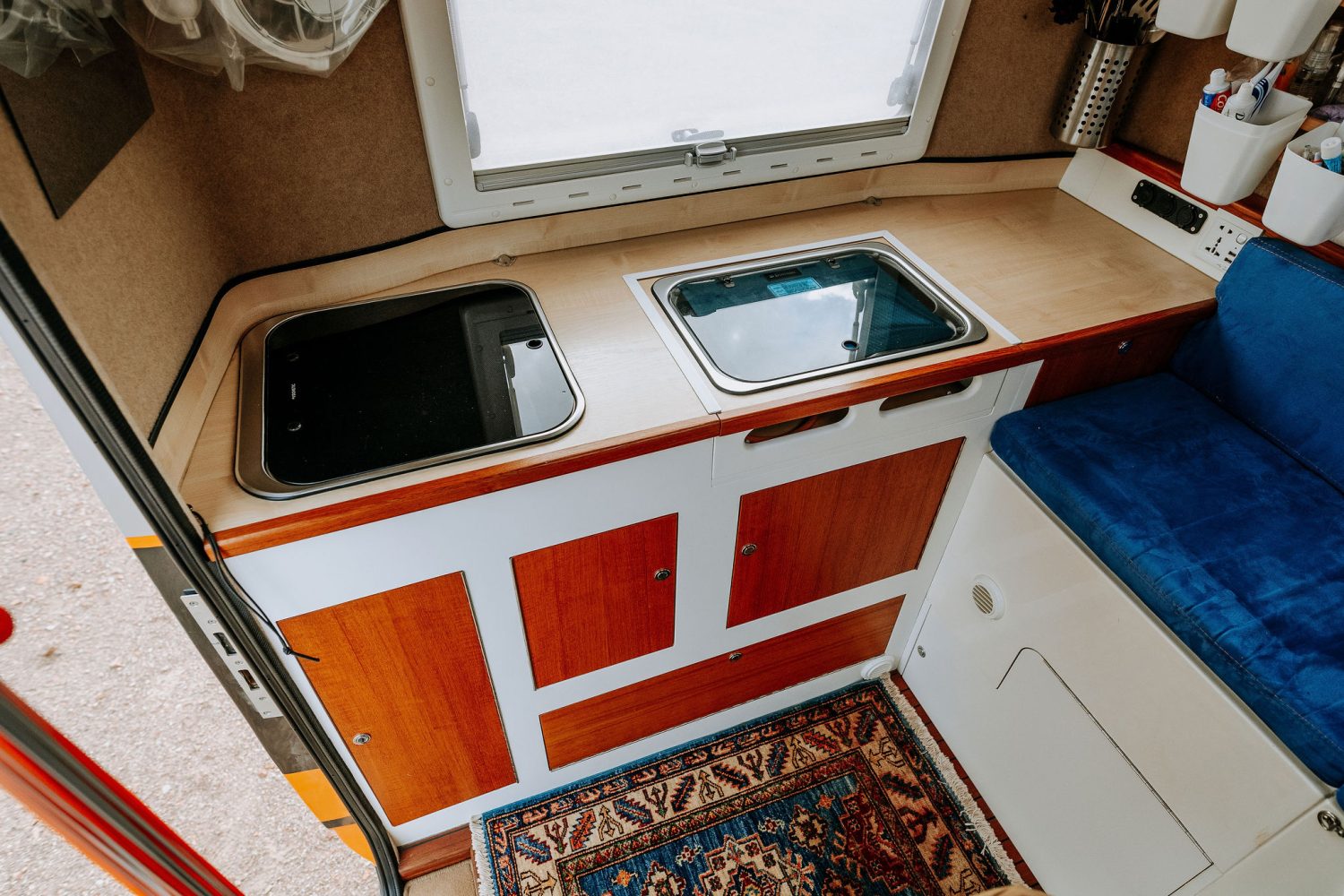 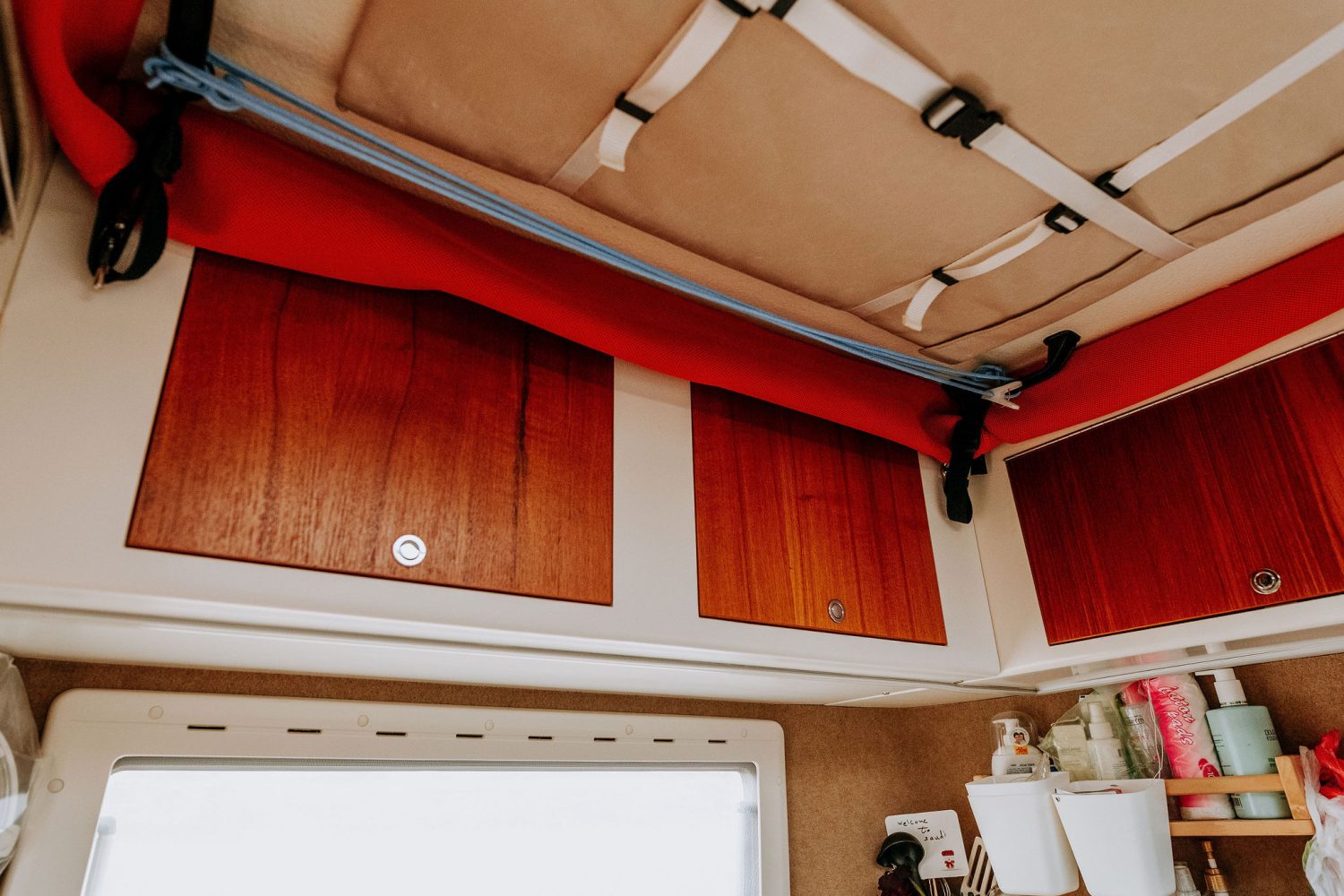 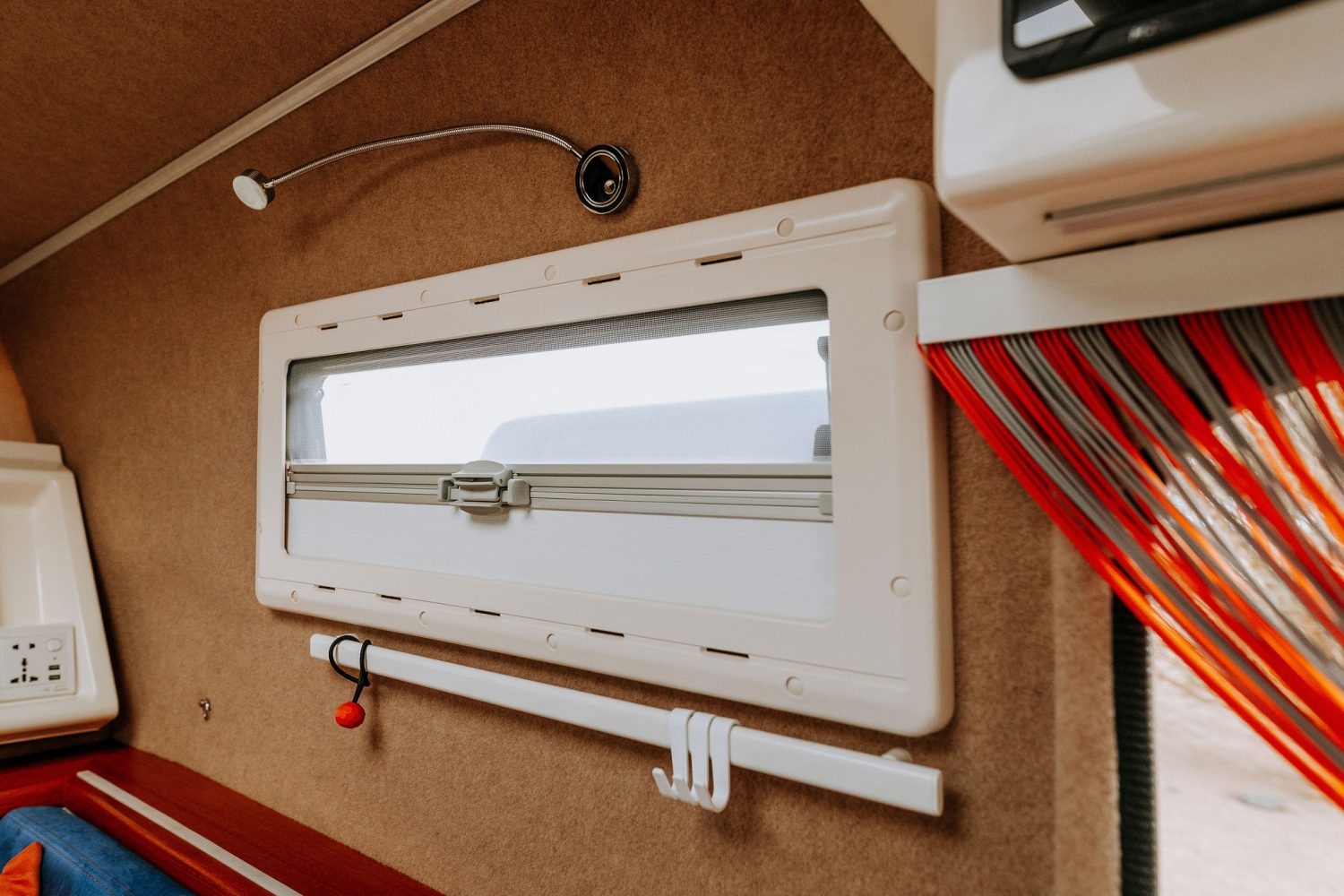 Over four years, Marcel’s vision gradually became a reality as the camper’s interior came together. The queen-sized bed, four-person dining area, teak flooring, and industrial felt-covered walls transformed the space into a welcome home for Marcel and Chiara’s daughter, Leila, to join from time to time during breaks from school in the UK. The white cabinets, laminated with teak, are a nod to Marcel’s sailboat-inspired vision for the build, which took place near Lake Como in northern Italy. The region is well-known for boat manufacturing and is home to highly qualified craftspeople keen to lend a hand. Accordingly, Marcel put together a team of specialists to help with the build, including his best friend Renato, blacksmith Massimiliano, and Luca, a carpenter. 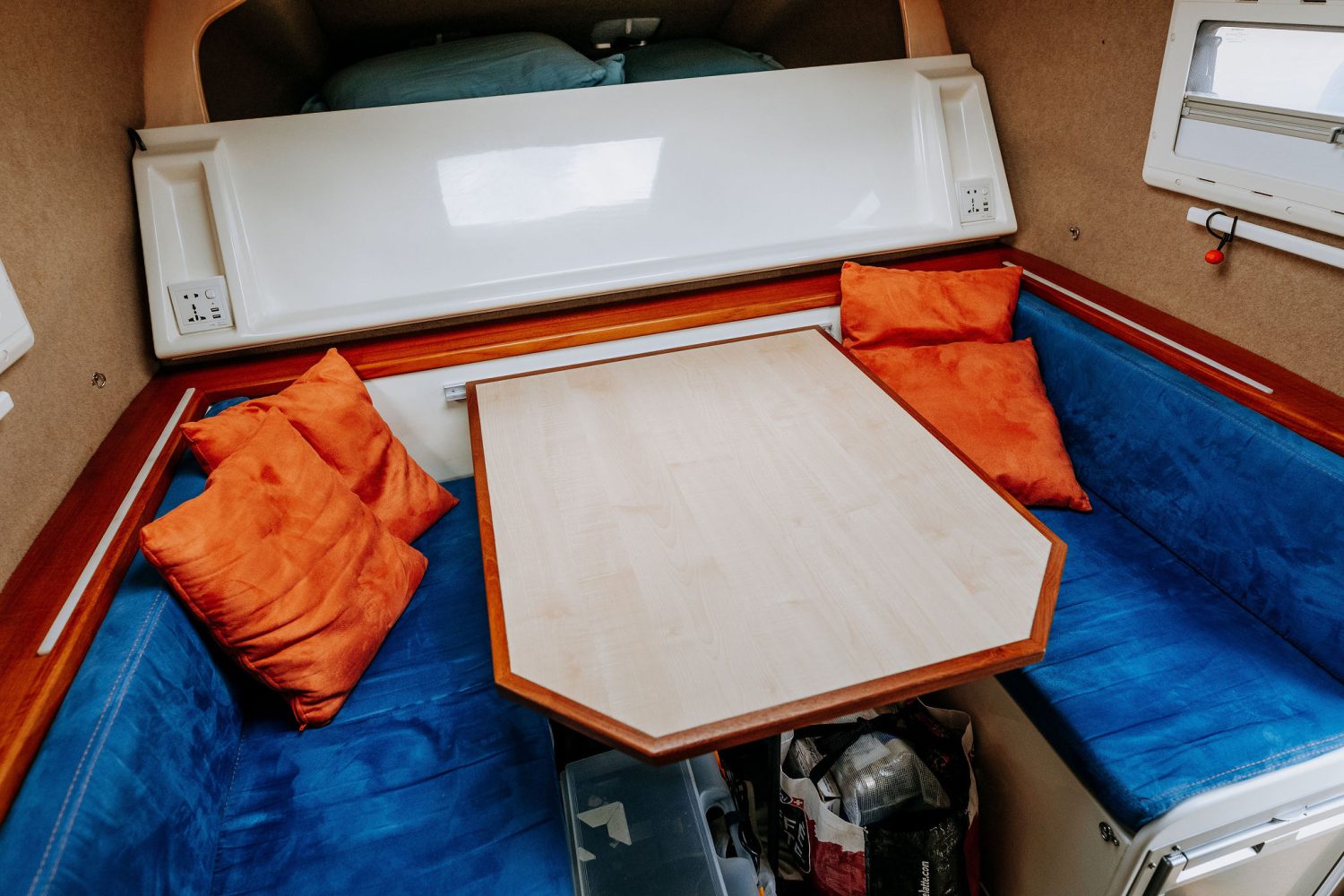 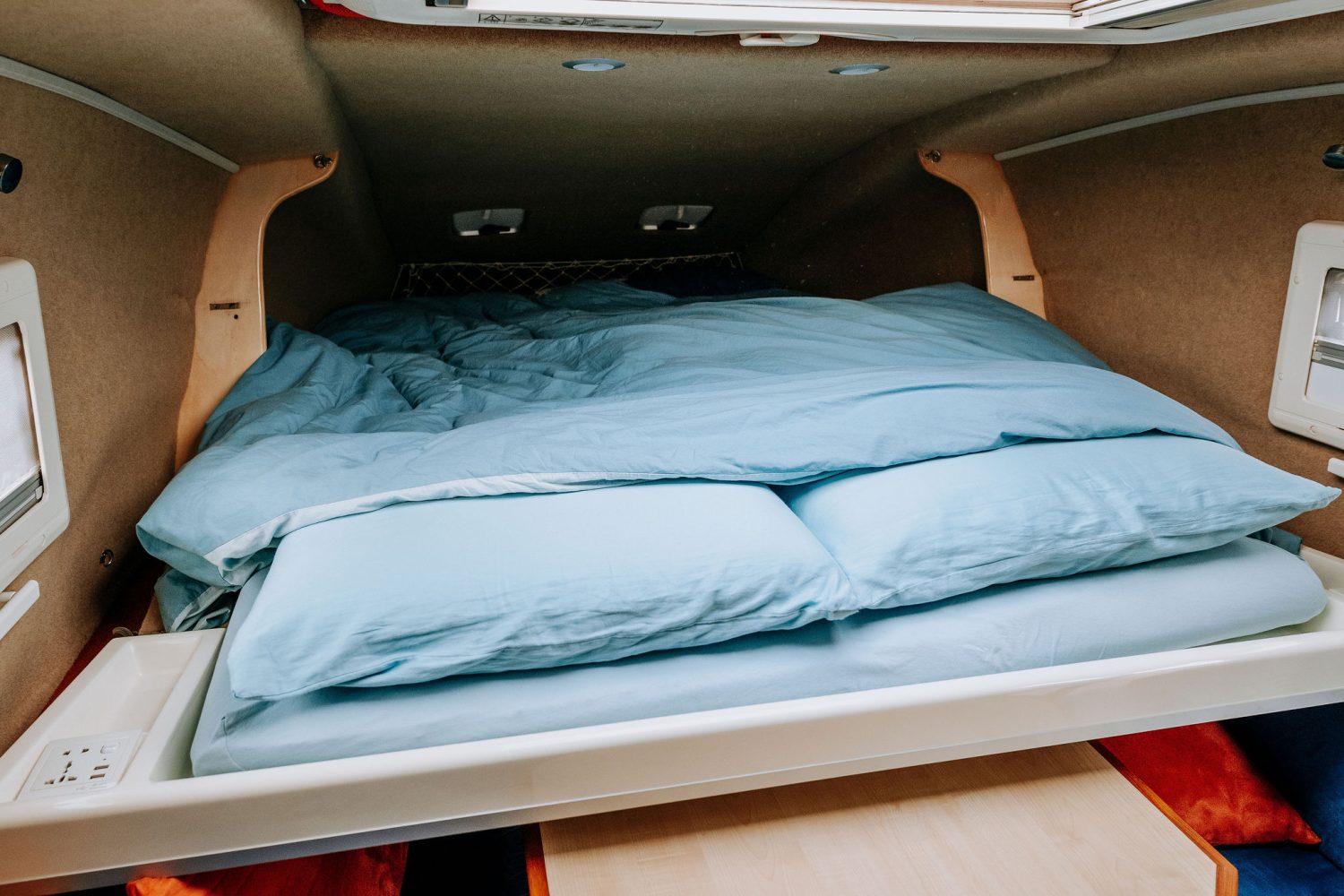 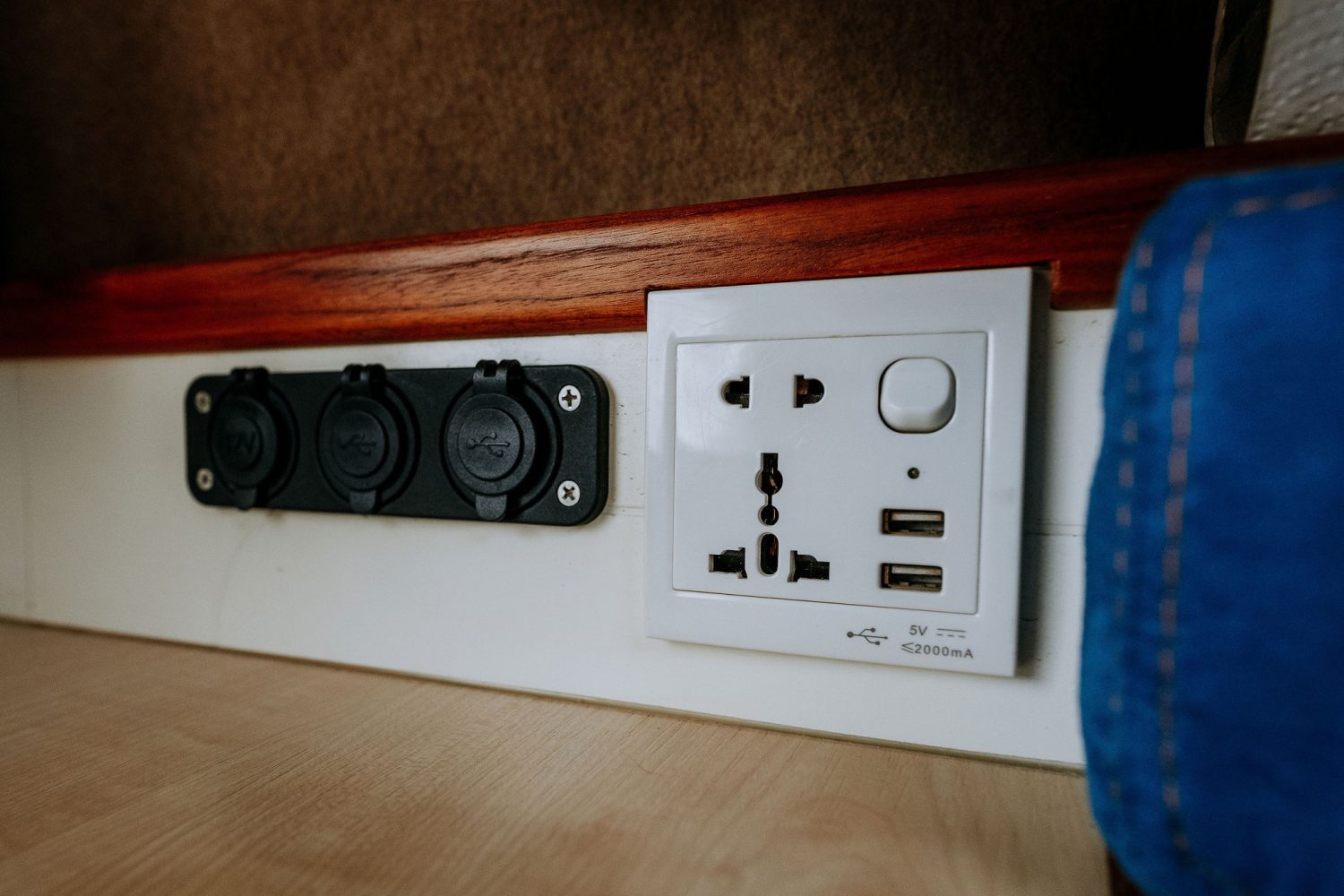 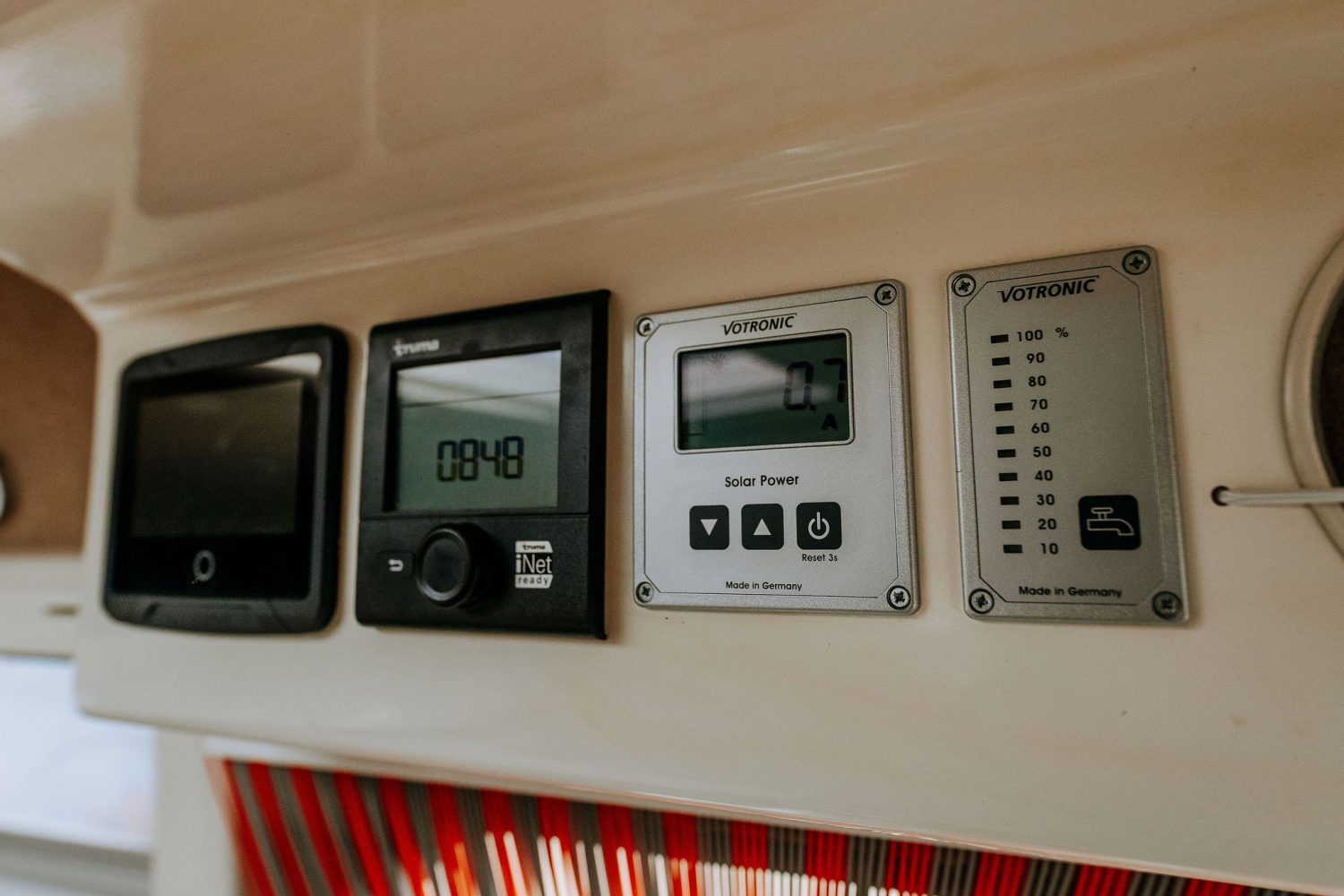 Realizing the importance of redundancies within an overland build, Marcel included a Dometic CoolFreeze CF16 refrigerator in the rear of the truck cab (complementing the fridge in the camper cell), a double water filtration system, and two sets of lights on separate circuits—just in case. Push locks and custom-made lock brackets were added to keep the couple’s belongings from making a surprise exit during particularly bumpy sections of road. An indoor shower and Thetford Porta Potti have come in handy for long waits at particularly difficult border crossings, while an extendable roof can be popped up to add more space, air, and light in hot or humid climates.

“We wanted to discover something humbler and allow us to discover ourselves and the world.” – Marcel, Overland Vagabond

Eager to share the build process, Marcel documented each step along the way via the Overland Vagabond YouTube channel. Currently in Dubai, the couple plans to ship their vehicle to Africa. They’ve seen a lot of the world so far, but, Chiara tells me, they’re just getting started.

Learn more about Marcel and Chiara on Episode 82 of the Overland Journal Podcast. 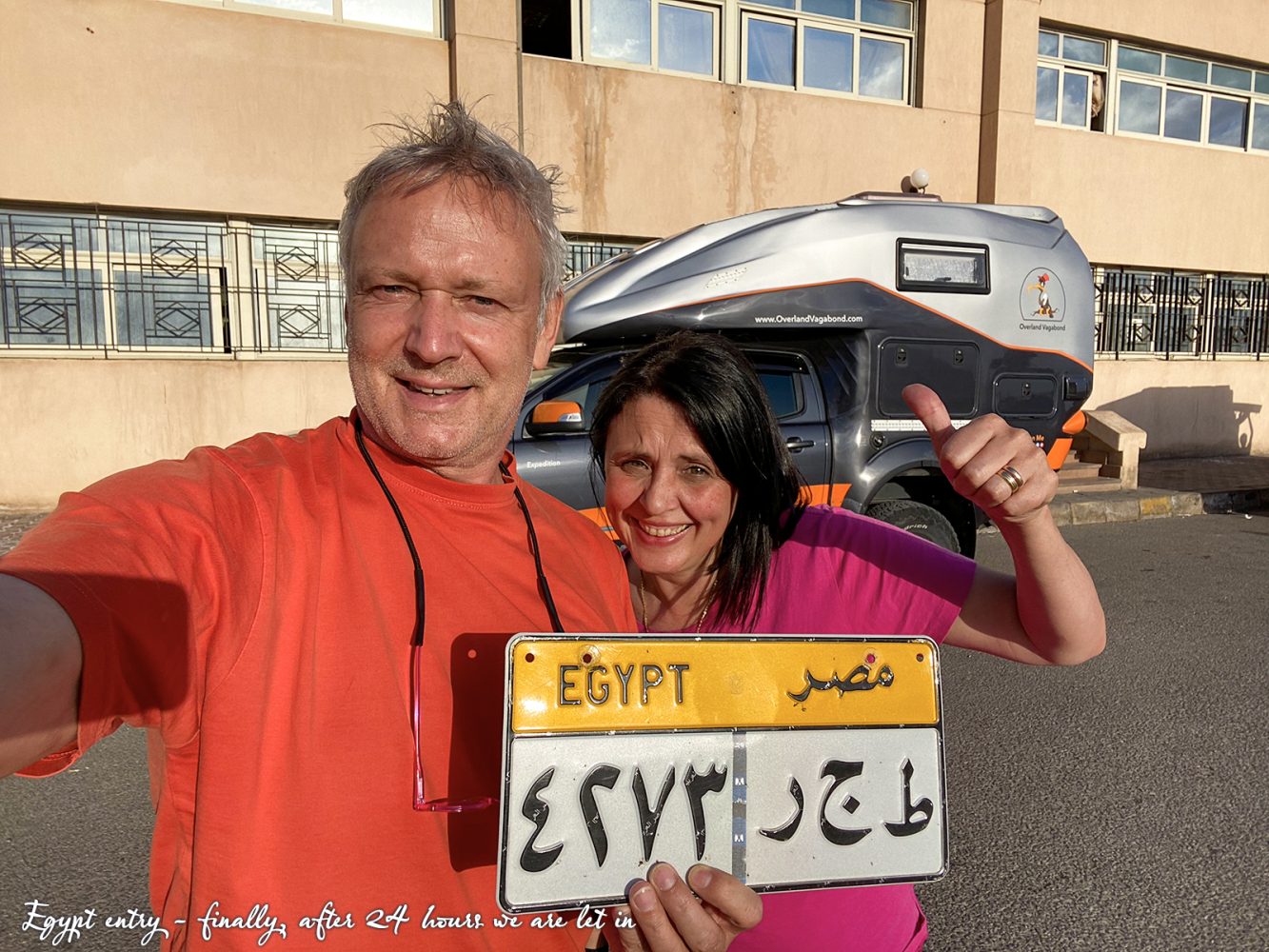 If you would like to learn more about Marcel, Chiara, their journey, or their build, visit their website at overlandvagabond.com.