Choosing an overland vehicle can be like an episode of Indian Matchmaking: you want a unicorn, but your matchmaker insists that meeting 60 to 70 percent of your criteria is more realistic. You want butterflies fluttering in your stomach, to develop a trusting relationship, and have the coolest winch, lights, and bumper. But sometimes, the right vehicle appears unexpectedly, in a form you never imagined. Although Tim and Kelsey Huber’s Maltec-converted 1990 HDJ80 Land Cruiser seems flawless, the couple knows this isn’t the case. “There’s no perfect truck,” Tim admits. Like any relationship worth the investment, a lot of blood, sweat, and tears have gone into the Hubers’ Troopy, transforming it into more than a mere camping truck—it is now their home.

Known as Dirt Sunrise, Tim and Kelsey are a pair of off-road recovery instructors who, after watching many of their students take the leap, tackled the Pan-American Highway in their 1995 Land Cruiser named “Goose.” And while Goose proved a great platform in many ways, strong winds in Patagonia presented a problem for the Campteq pop-top. “You’re lying there feeling the whole truck sway, thinking, This probably isn’t great for the truck, and I’m definitely not going to sleep,” Kelsey says. “There were times in Patagonia where we didn’t pop the top because it was so windy, but we didn’t have a place to sleep. One night we slept in the front seats. Then we made a makeshift bed where you had to sleep on your side, so we both fit.” The lack of sleep took its toll. “Trying to work on the road and be creative when you haven’t slept for five nights is really tough,” Kelsey laughs. The Hubers brainstormed ideas for their next build. Tim knew a camper cell or box was the next step, but they were expensive and challenging to find. But to them, Maltec was the hero truck. “That’s what started it all,” Tim says. 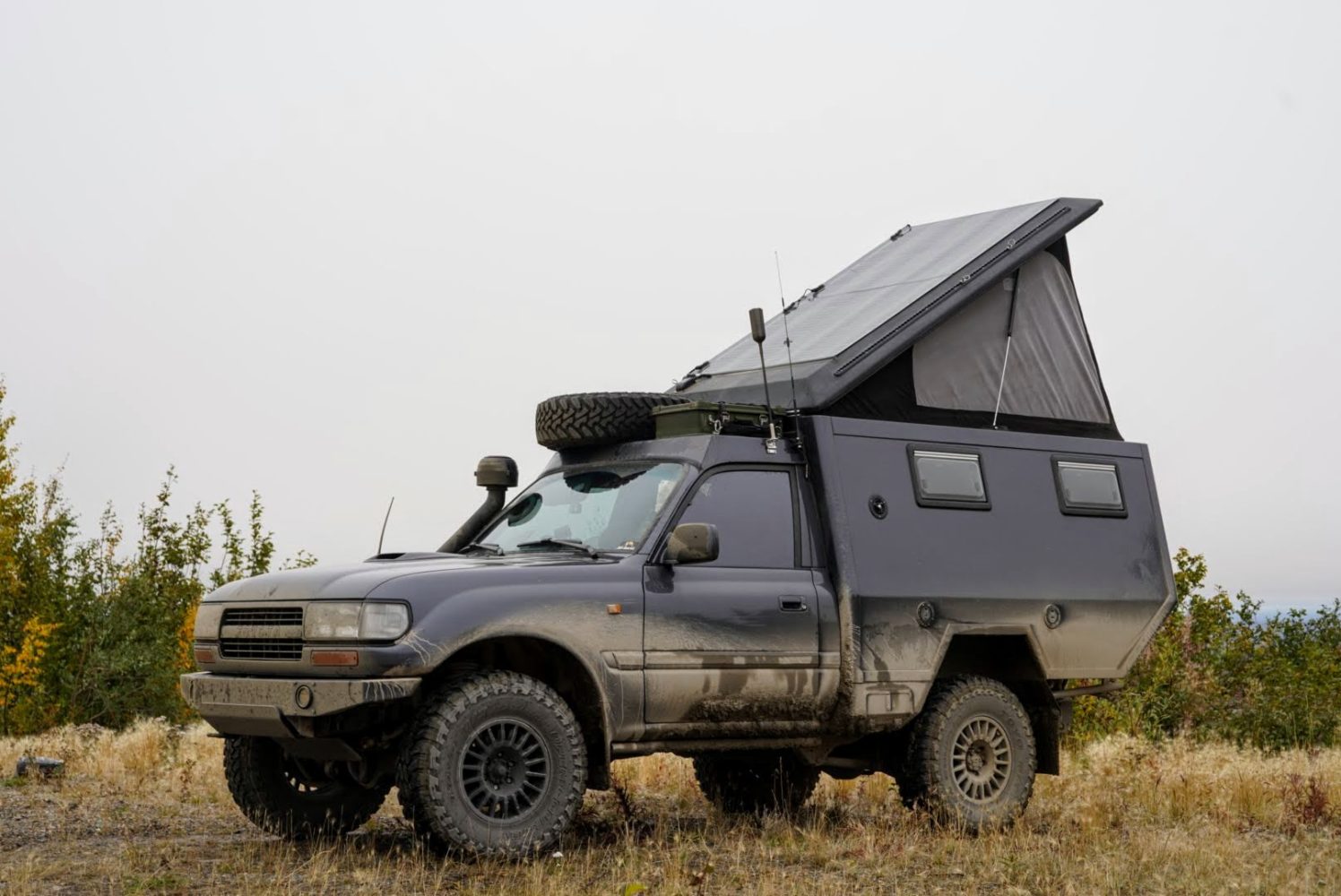 Maltec trucks are notoriously high-end, hard-to-find, and come with a corresponding price tag. “It was only going to happen if we found an older one that was used and maybe a little beat up,” says Tim. Keen and determined, he kept in touch with Maltec staff in Germany. “One of the younger guys says, ‘There’s a guy in Texas who might sell but hasn’t listed it yet.’ I knew someone would jump on it. The next day we drove to Austin.” Tim admits the price, even at half the cost of a new Maltec conversion, was still a stretch for them. “It was like, this is the one, so you’re either going for it, or you’re not. We went for it.”

The 80-Series looked beautiful but was nearly a decade older than Goose, so Tim and Kelsey focused on reliability, replacing everything they could, from bushings to tie-rod ends, brake pads, calipers, and rebuilding the axles. They knew the truck would travel internationally, so they went full tilt, completing “20 years’ worth of maintenance” in a matter of months. Fortunately, the interior was like new. The previous owner preferred wheeling and never used the living space; the soft-close drawers were a bonus. The truck had an AGM battery but no solar, so the Hubers added 252-watt Sunflare Xplor solar panels, a Victron MPPT and DC to DC charger, and a Battle Born 100Ah lithium battery. They swapped out the water filtration system, designed more for the weekend camper than someone filling up from a Turkish roadside spring. 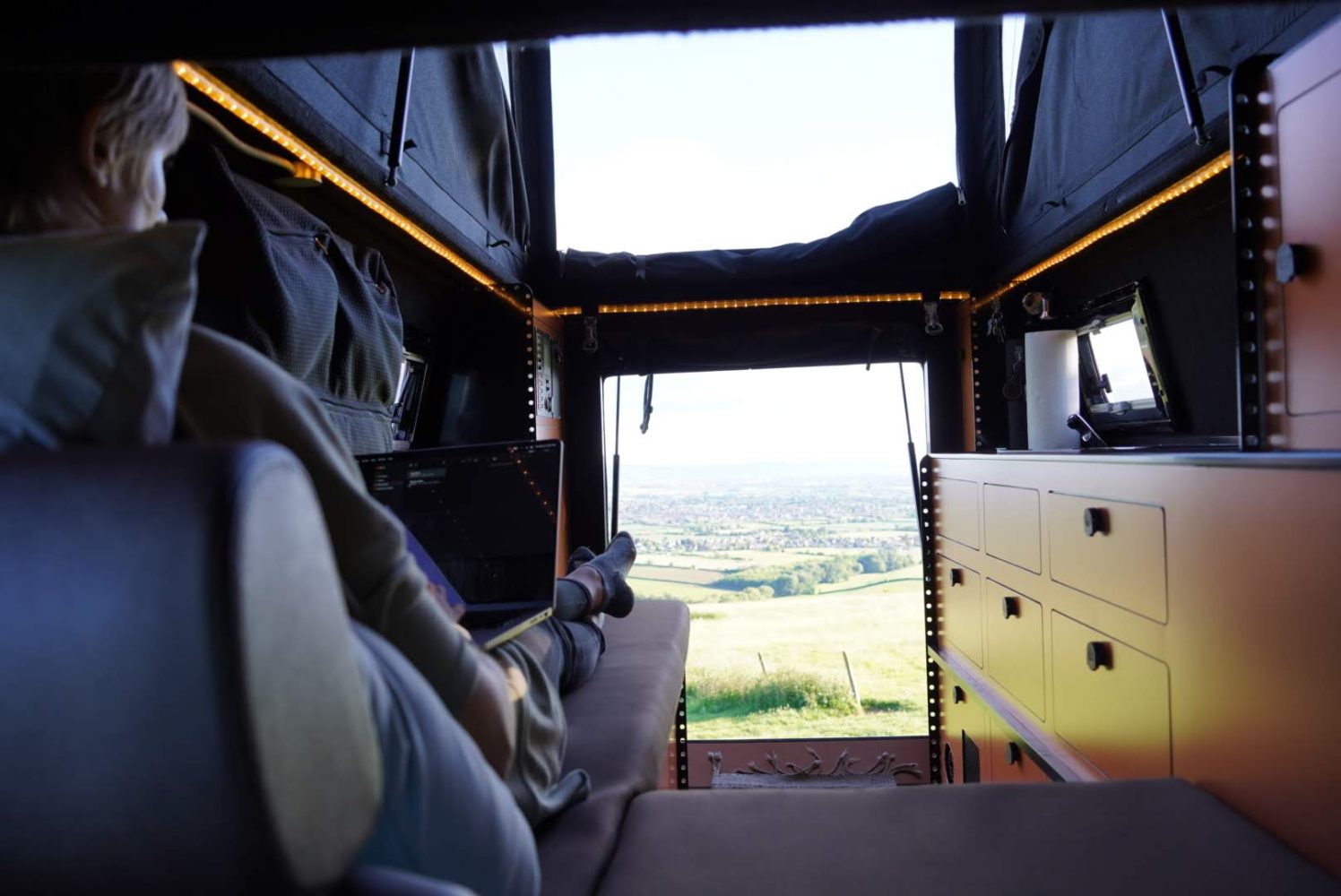 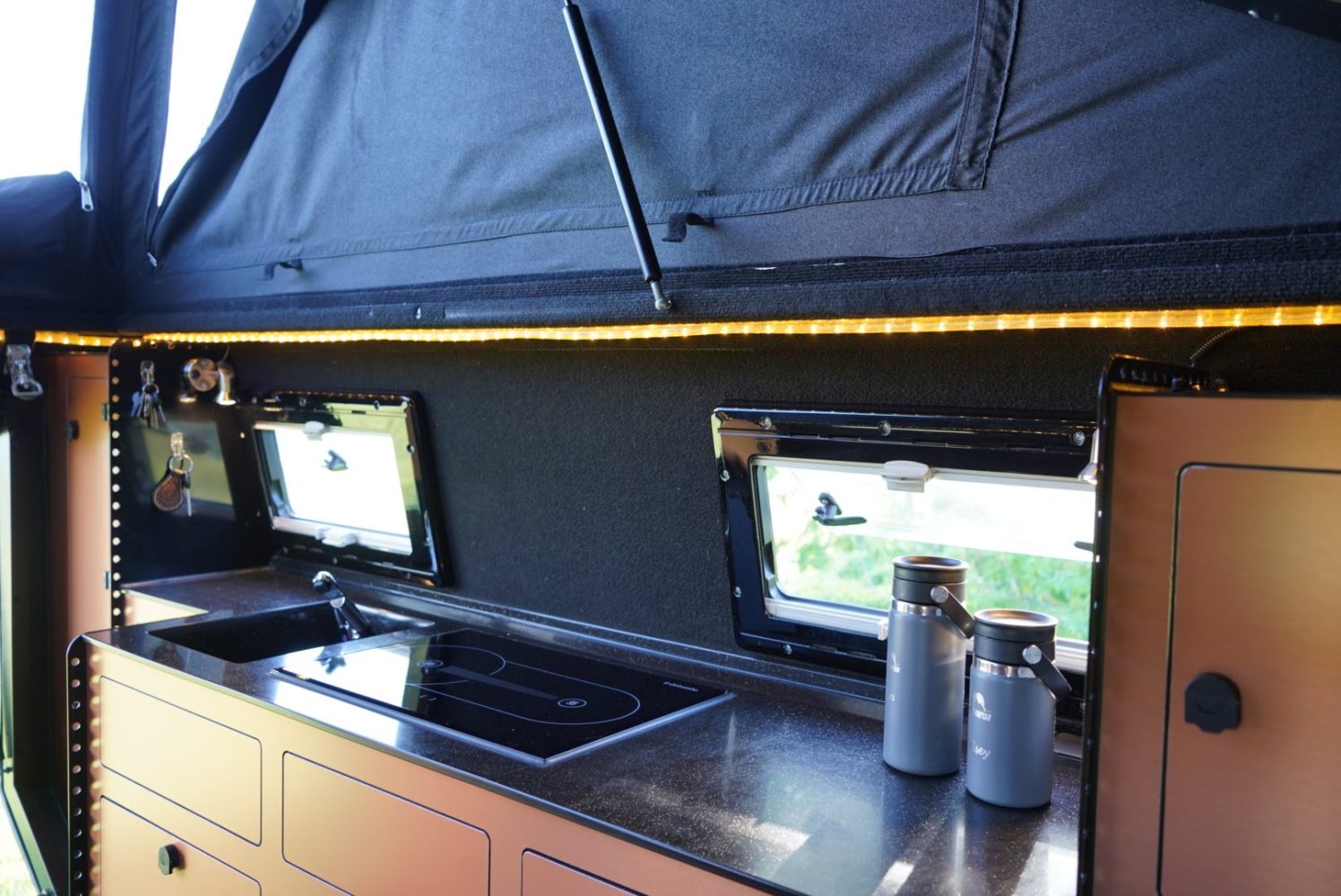 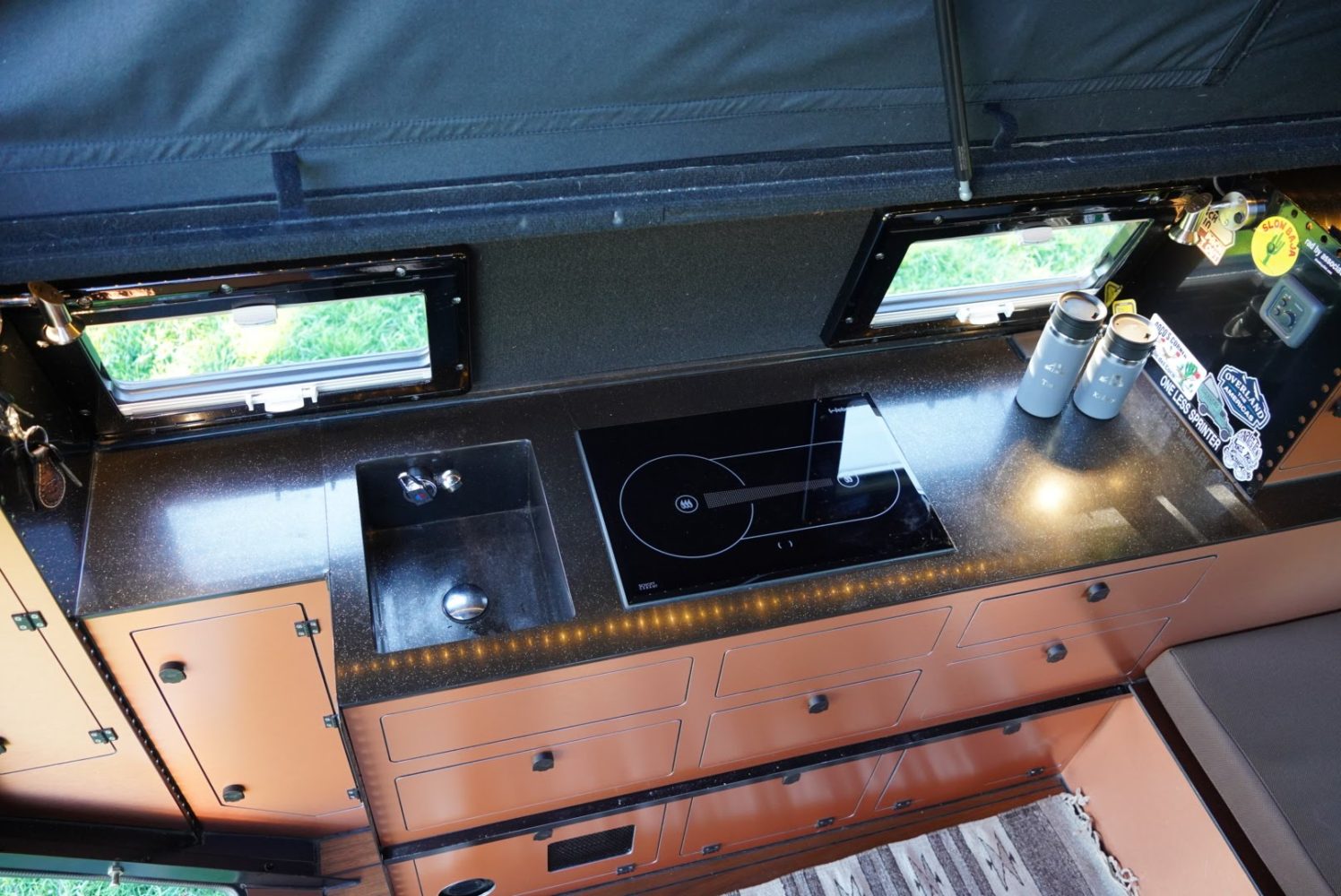 The Dobinsons suspension components worked like a charm, so the couple upgraded what already existed but added different spring rates. “We have 65 gallons of diesel, so we needed a little more height and a higher spring rate,” Tim says. The truck came with Braid Winrace wheels, sourced from Spain, which remained due to their lightweight strength. These are complemented by Toyo MT Open Country 255/86R16 tires, which the couple says perform well in the Pacific Northwest or Alaska (versus dunes or sandy tracks) due to their aggressive design. “We’ve stuck with the tall, skinny 33-inch tires,” says Tim. “When we wheeled or went to Baja, the 35s were cool. But when you’re overlanding, you’re lugging around these big tires and getting worse mileage.”

The truck wasn’t equipped with a winch, but the Hubers felt the addition was important as they travel solo, so Tim pulled the bumper apart and built a tray to house a Warn Zeon Platinum 10-S winch. “We didn’t want to cut and extend the chassis or any of that crazy stuff because it’s a pretty reliable 80 Series. Now that we’ve done all the maintenance, I didn’t want to mess with that.” The front axle mounts ripped off at one point (after some research, Tim discovered that this occasionally occurs in early 80-Series Cruisers), so the couple welded new mounts and castor correction plates to fix the issue. 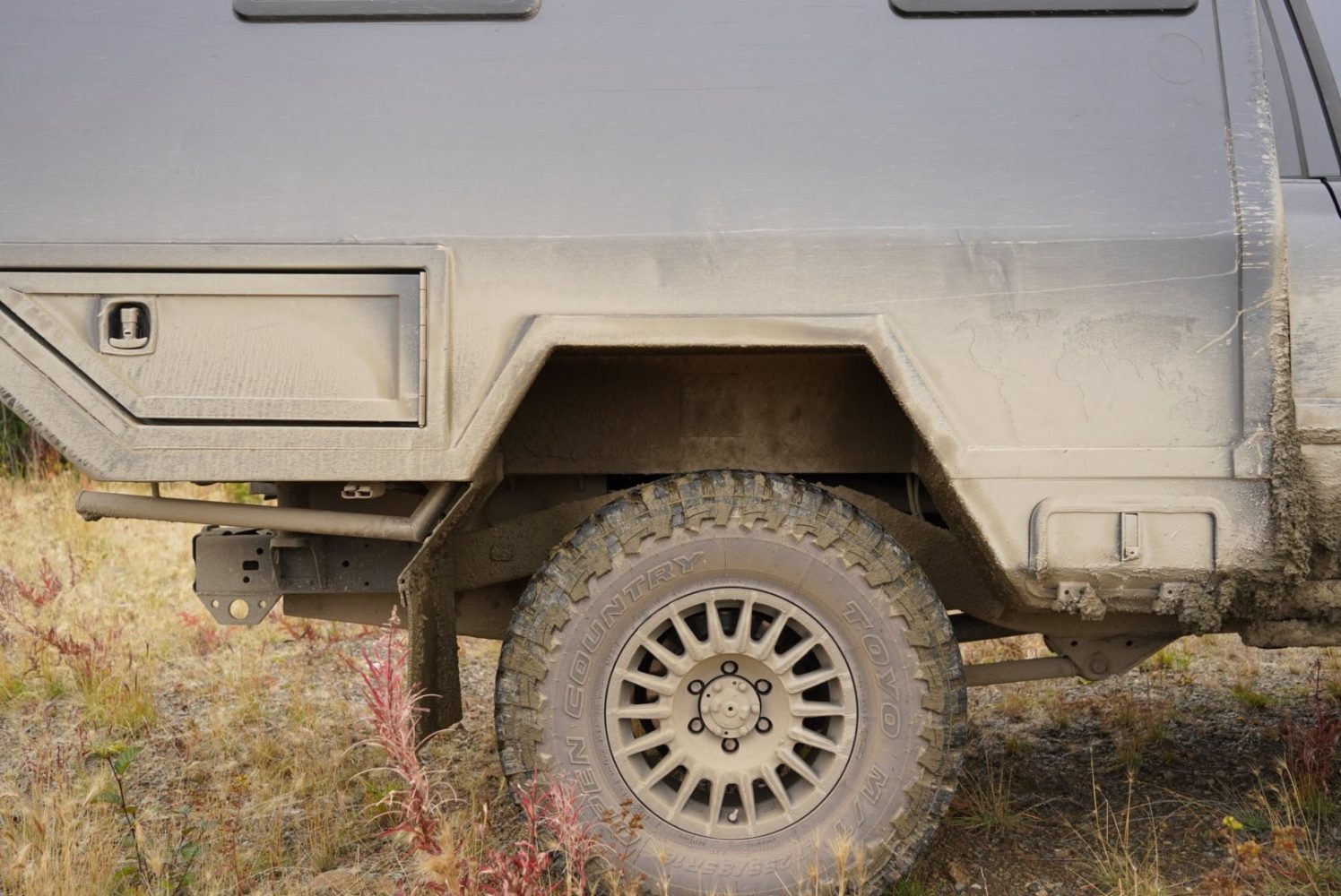 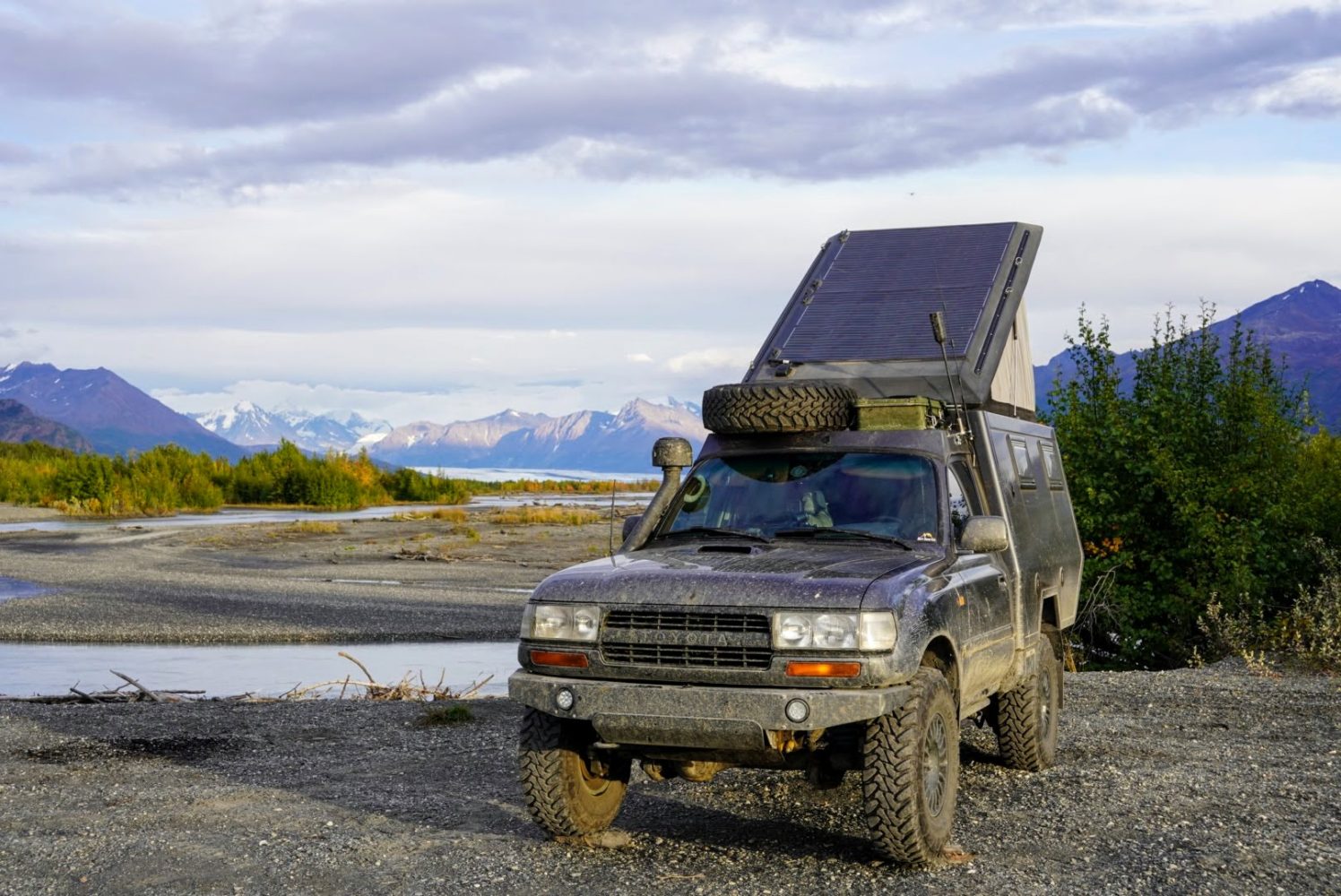 Clearly, Tim and Kelsey aren’t afraid to grab the tools and make things happen. “My dad was a homebuilder, so I had the mentality of digging into it, figuring it out, building it, and doing it yourself,” Kelsey says. “We restored some cars, so I had a little bit of [vehicle] knowledge.” The couple would jump into projects together when they first met, working nights and weekends to get the job done. “We bought this Porsche 911 that we took on our honeymoon road trip on the Pacific Coast Highway up to Oregon,” Tim notes. “Every night, she would be there working on it with me. She’s not someone who’s just watching. She’s got rubber gloves on and is like, ‘I’m going to take this inside to the bucket of diesel and clean the birfields out.’ There’s nothing I’ve done on the trucks or cars that she hasn’t done some work on.”

While Kelsey learned about vehicle mechanics at home, Tim learned from riding dirt bikes in college. “When I moved from California to Arizona for college, it was like, there’s no beach, so what do we do here?” He met a group of guys who raced and rode motorbikes, many of whom were lifelong mechanics. “I remember this kid being 12 or 13, and he would tell me I was doing something wrong. His know-how was like a master’s level of knowledge. It all just came from those guys and tons of trial and error. Lots of error.” 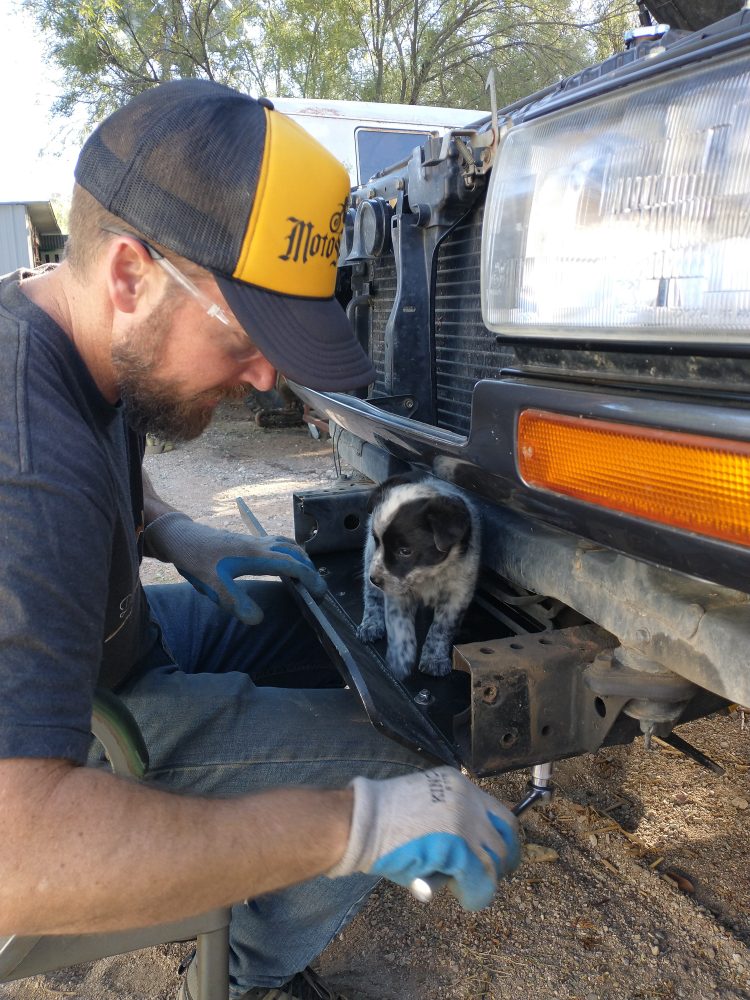 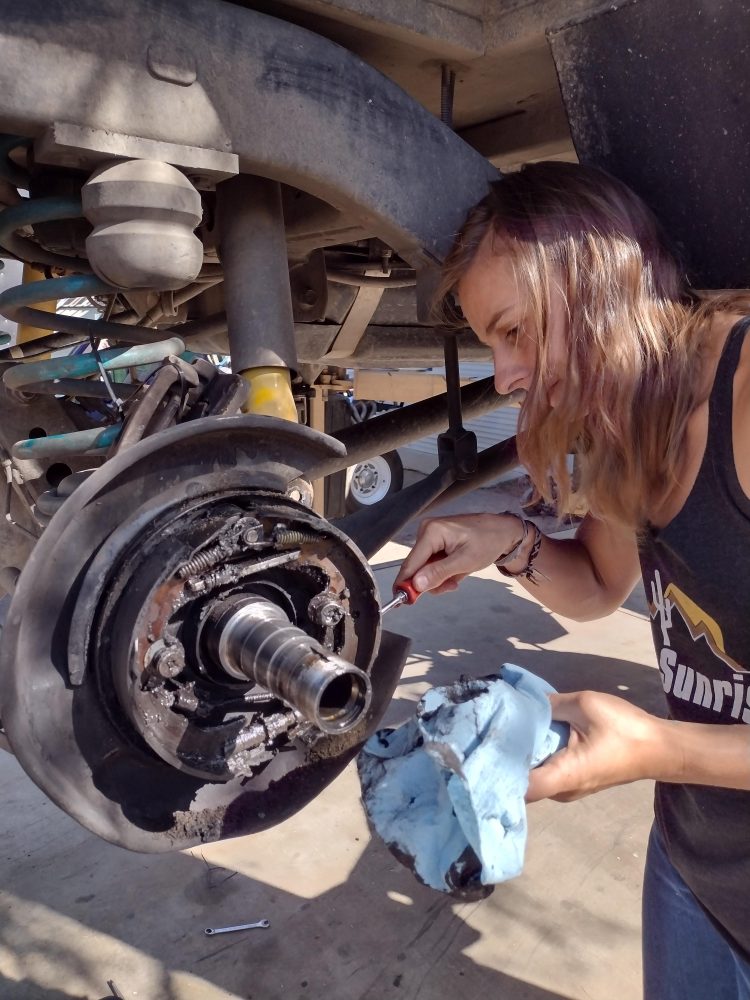 Finally, after all the prep and maintenance work was complete, the Hubers took “Dusty” (named after Dusty Bottoms from The Three Amigos) through a shakedown run to Alaska to work out any last kinks before shipping overseas to Europe. Currently, in Turkey, the couple says they’ve enjoyed the indoor living space, the ability to sleep in the box with the pop-top down, and having a comfortable area to do computer work. “For me, it’s more of a home,” Kelsey says. “It’s a place that you can retreat into, especially when I’m making videos. It’s nice to have a controlled space and still have the ability to live outside.” They’ve often slept in the “downstairs” part of the camper due to rough weather in Alaska and the UK or to feel more stealthy or self-contained. Kelsey explains, “Sometimes you don’t want to impose if there are a lot of vans, and it’s kind of weird to put your tent up, so it was cool to have the option.” 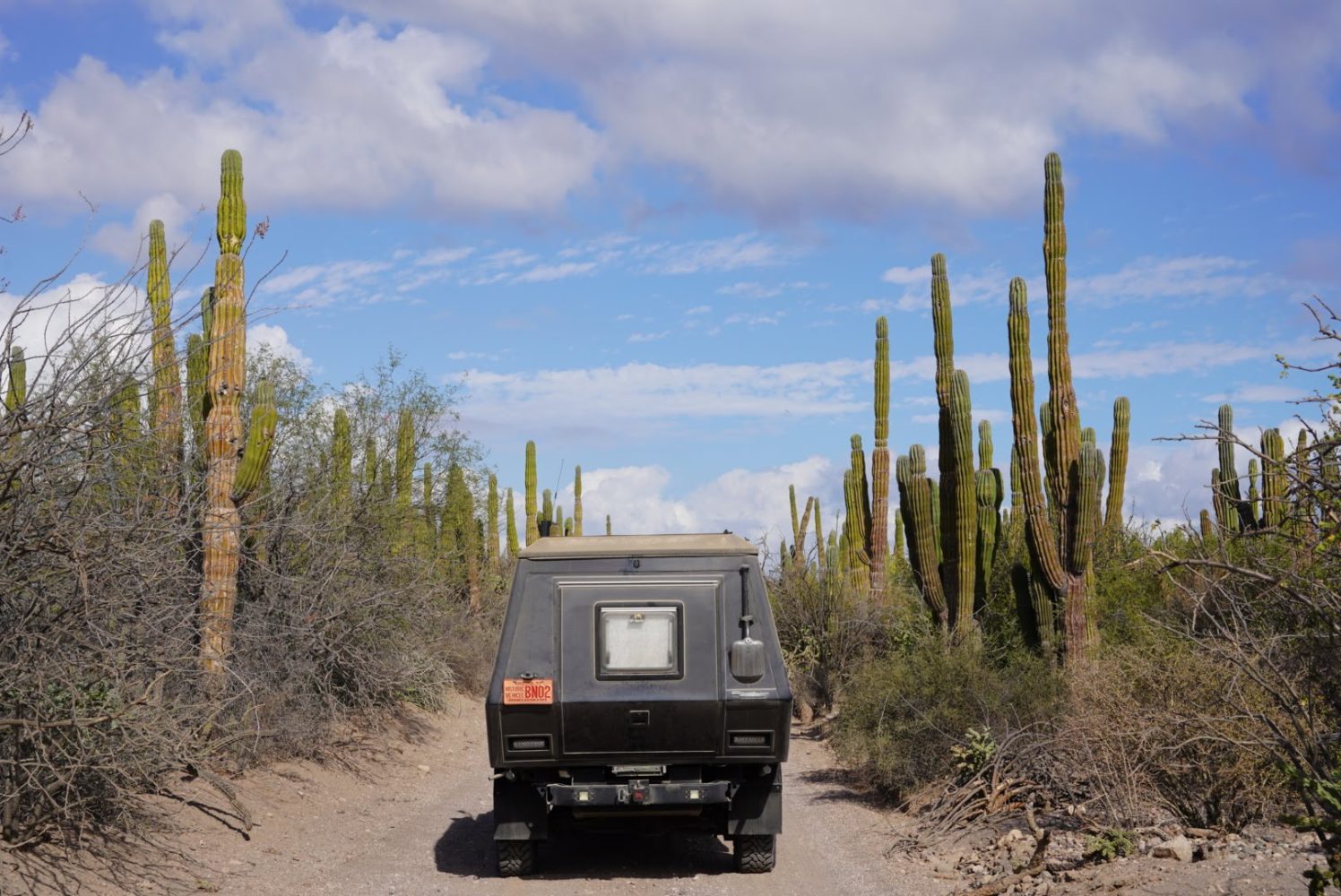 As with any build, there’s always room for little changes or improvements. Tim and Kelsey’s wants are few, but a bigger fridge with a freezer section is high on their wish list. They are running a Webasto diesel stove, which works fine for their electric kettle and coffee in the morning, but Tim is open to an upgrade. “If money were no object, we would add a second lithium battery and do an induction cooktop, because why not?” Although Tim admits he’s never coveted big rigs, in Europe, both he and Kelsey suddenly understood the appeal. “We went to a ski resort, and everyone was mountain biking and paddleboarding. If [Dusty] was a Harry Potter truck, we would have taken bikes. But where we’re at now, it’s about off-roading.” 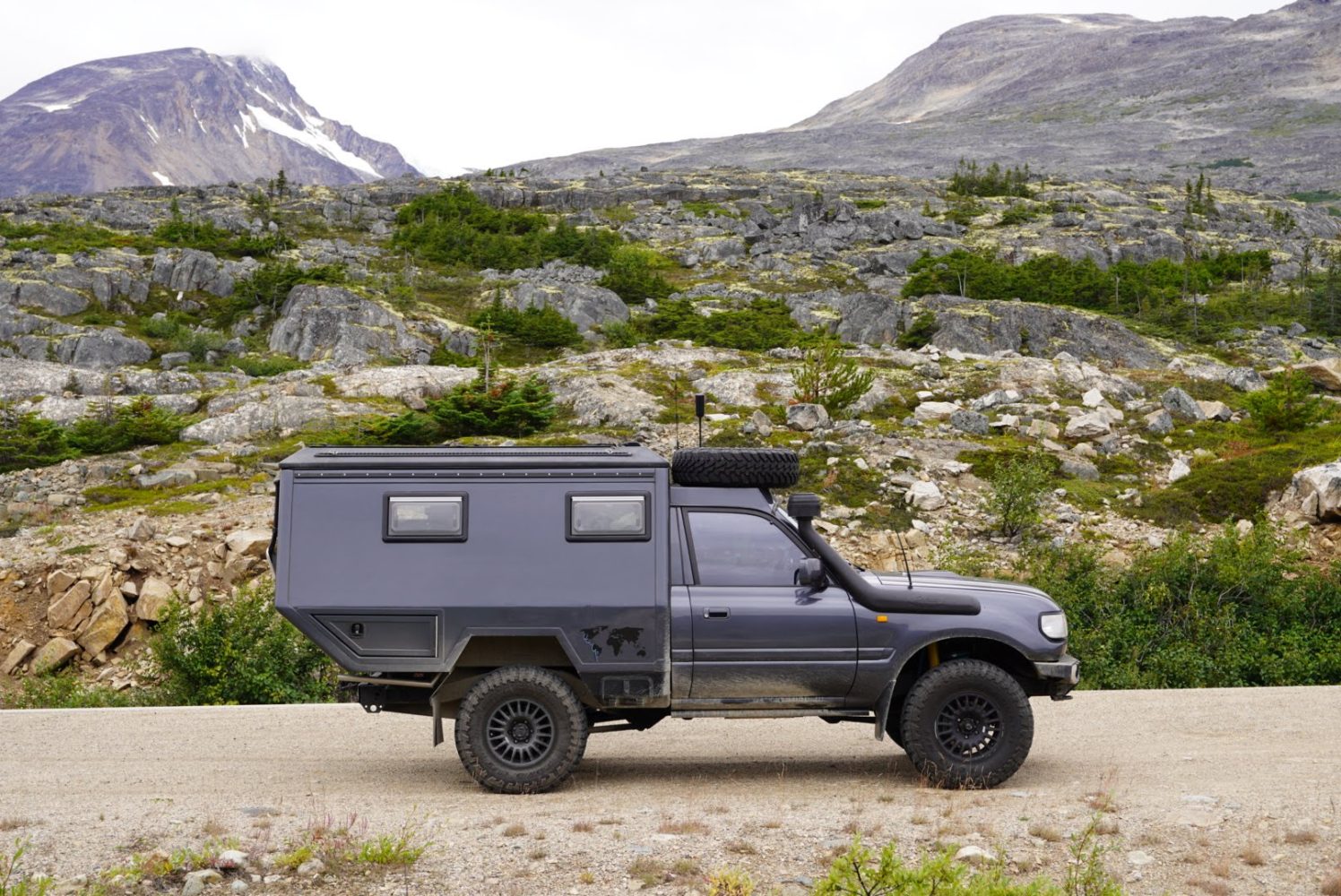