Looking at some of the overlanding vehicles roaming the wilds of Instagram, one might think that kind of adventure is financially out of reach. It’s not! If your desire is to get out into the world and you don’t necessarily care how you do it, building a rig to get you there doesn’t have to wipe you out financially. Some friends and I wanted such a vehicle to explore Southern Utah, but we didn’t have a lot of cash to spend. We set our budget at $10,000, including the vehicle, and set about our task building it in Los Angeles, California. The ultimate test of our vehicle would be getting it to Moab, Utah, and driving it on the Sevenmile Rim off-road trail to Monitor and Merrimac. Would we be able to find parts to fit an obscure vehicle and make it off-road ready? When we got it out there, would it meet our lofty expectations? We had 10 grand riding on those answers being yes.

Fortunately for us, one of our crew has a penchant for mining diamonds in mountains of muck. A 2002 Suzuki XL-7—the second generation was badged as an XL7 sans hyphen —with 106,000 miles on the odometer caught our eye at a small dealer just outside Phoenix. 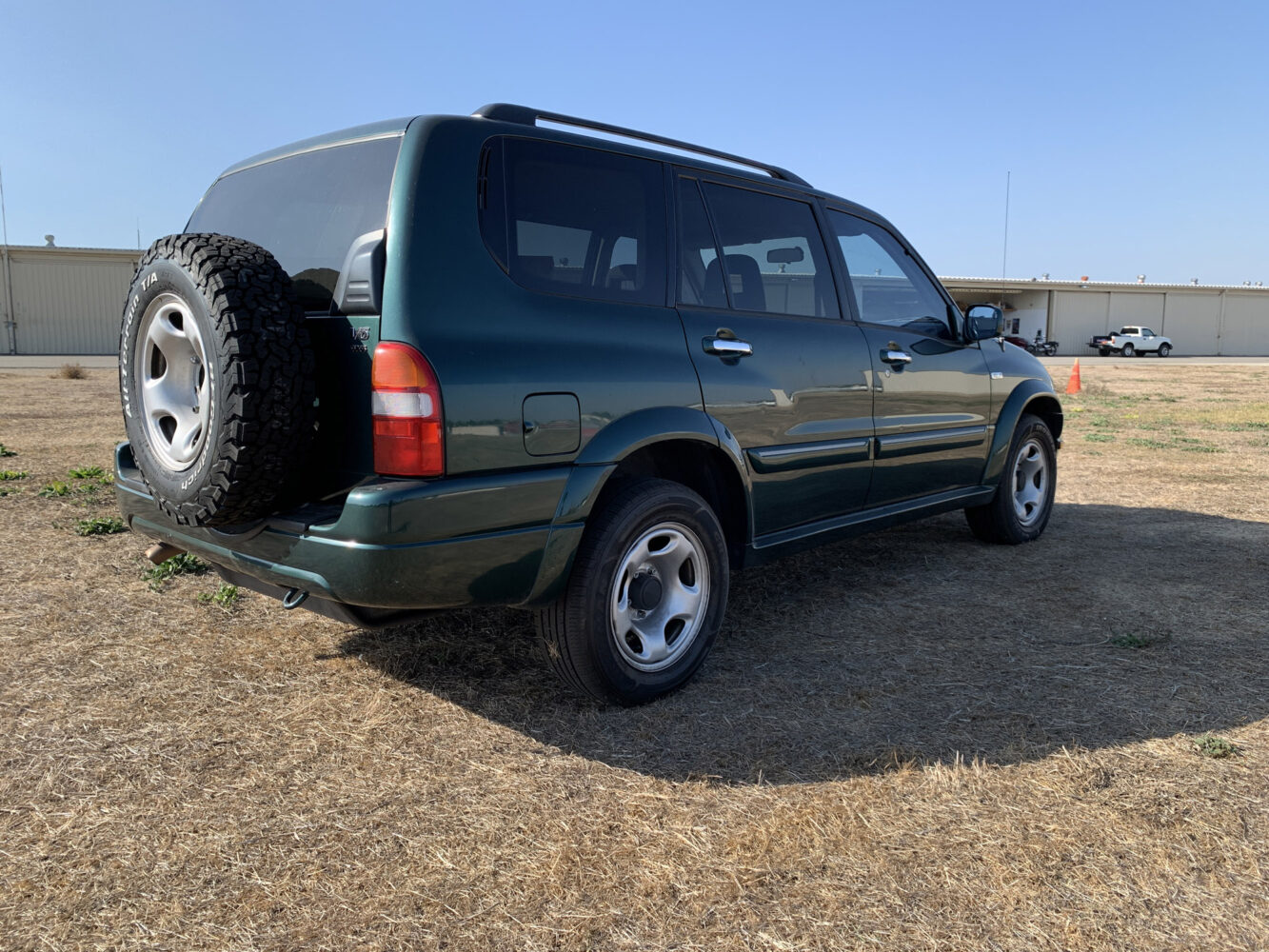 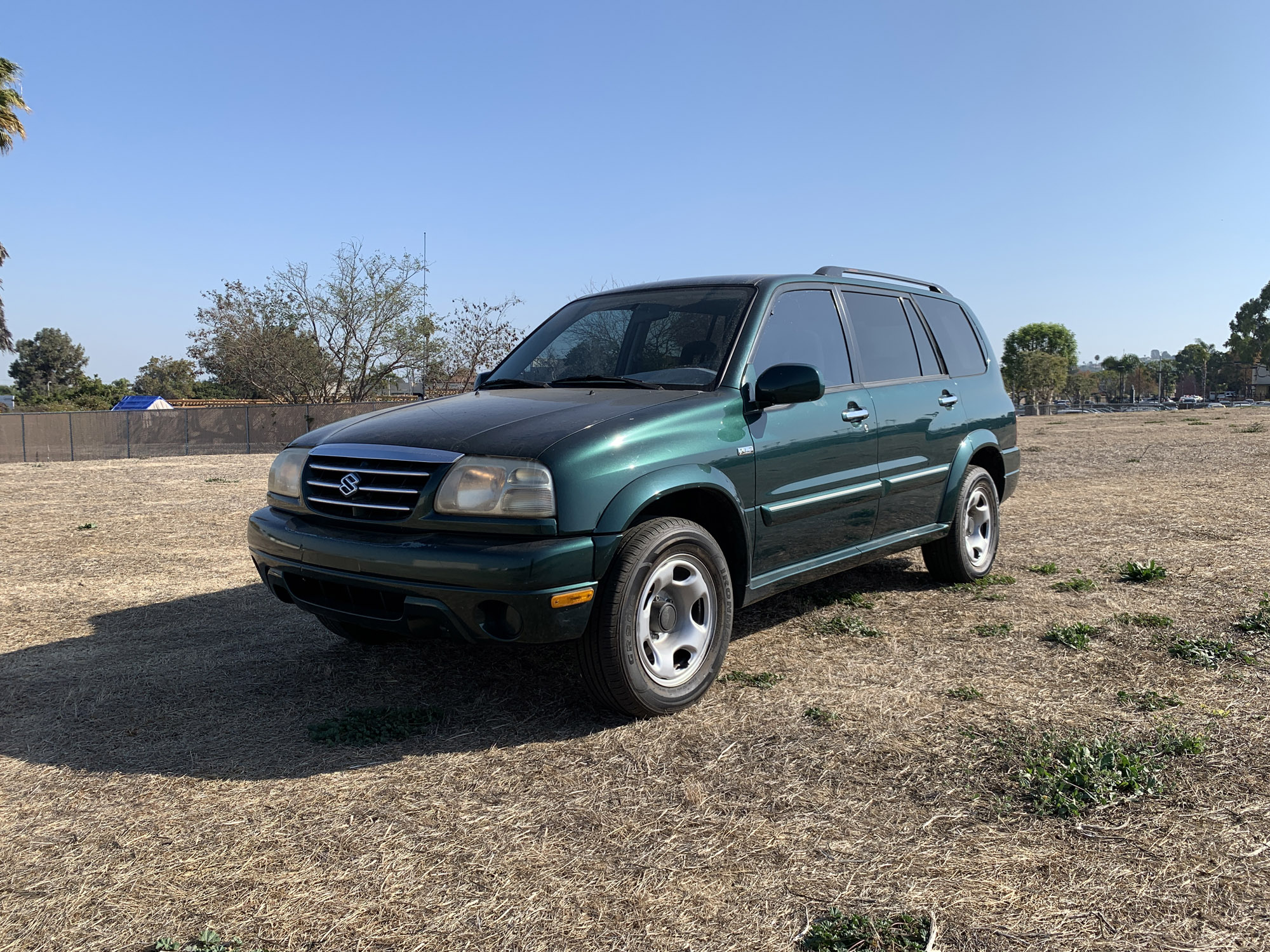 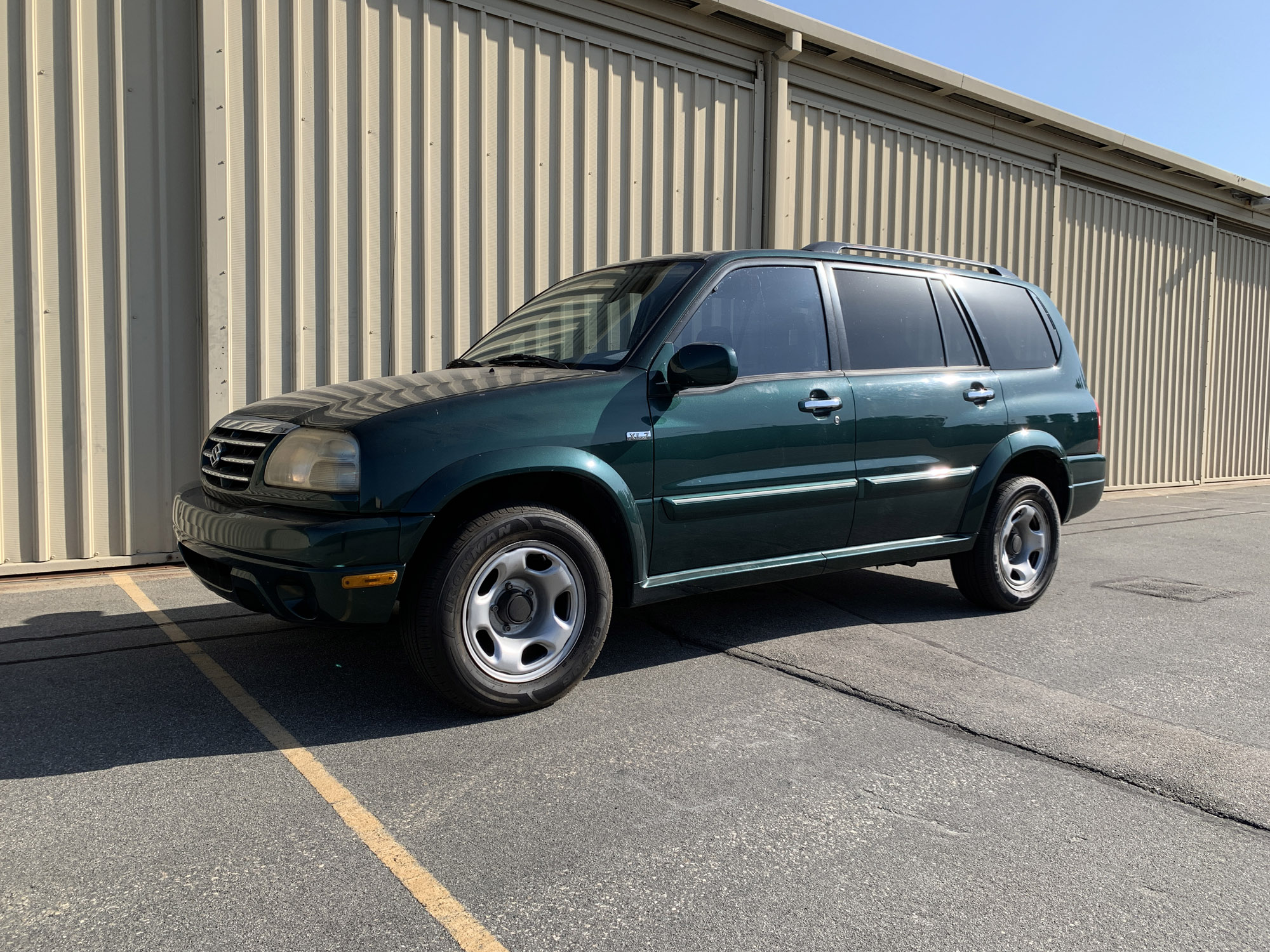 Its solid rear axle and Suzuki-built V6 with a solid history for reliability seemed like it might just be enough. We flew down to Arizona to check out the car that had, except for some noticeable golf ball-sized hail dents on the hood, clearly lived an easy life of indoor parking and pavement driving. We doubted the 4×4 capability had ever even been tested. After handing the seller 2,400 Washingtons, the drive back revealed some issues, including some vibration in the steering and soft brakes. A new set of American Racing steel wheels and front Moog wheel bearings solved the first problem, while a new master cylinder took care of the latter. We were good to start the build.

While we wanted to save money, there were two places we did not cheap out on. The first, tires, which are the most important part of any vehicle as they are your only contact with the road or the dirt off it. For us, slapping some BFGoodrich All-Terrain T/A KO2 tires was the only choice. 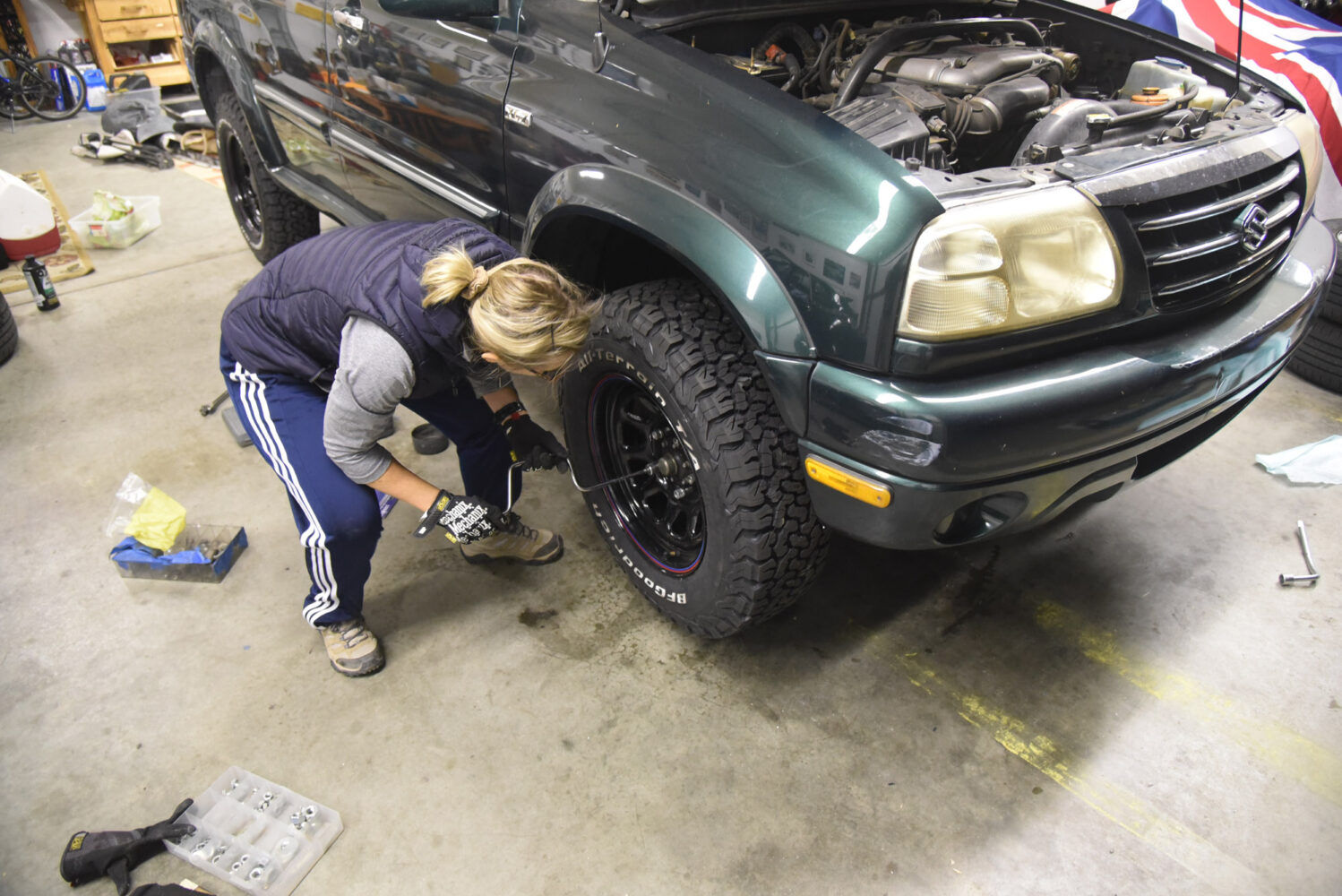 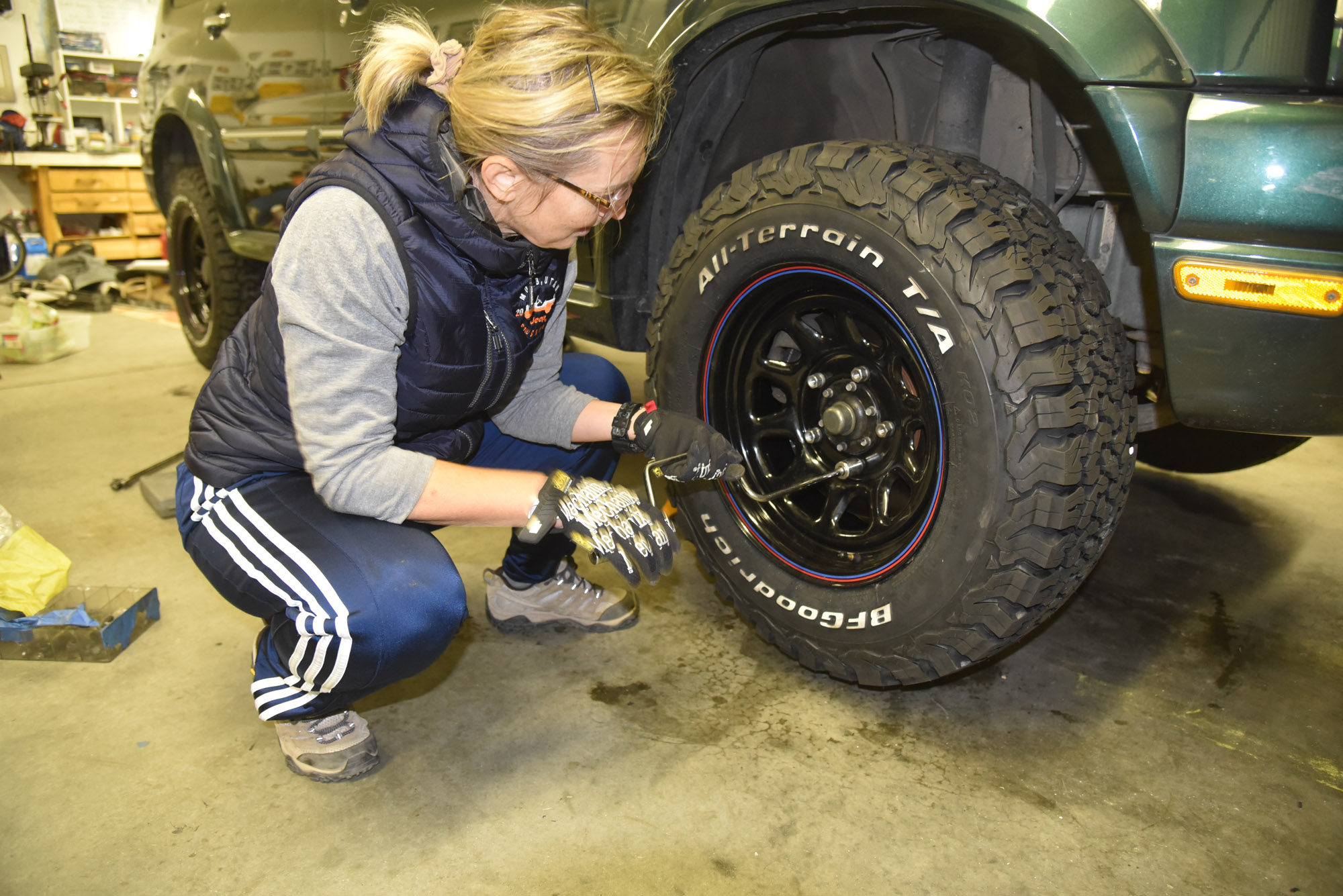 A great all-around off-road tire, the KO2 offers great sidewall protection, even somewhere like Moab, where the slick rock is anything but and acts more like dull razor blades against your tread. We didn’t need anything more as there’s not often mud in the Southern Utah desert. We snagged five tires—who’s insane enough to get away from civilization without a full-sized spare—but to save money, we spray-painted one of the old steel wheels and fixed it to the rear barn door. It would be covered up with MaxTrax anyway. That was our second no skimp—recovery gear. Buy the best stuff. You’ll regret it if you don’t when you need it most.

In order for those upgraded 225/75/R16 meats to fit under the Suzuki, we were going to have to lift it. We’d have to head all the way to Australia to do that, too. Not literally (we wish), but we found a lift kit that would fit from Old Man Emu, a brand with heavy off-road racing history based in Australia and purchased by ARB in 1988. 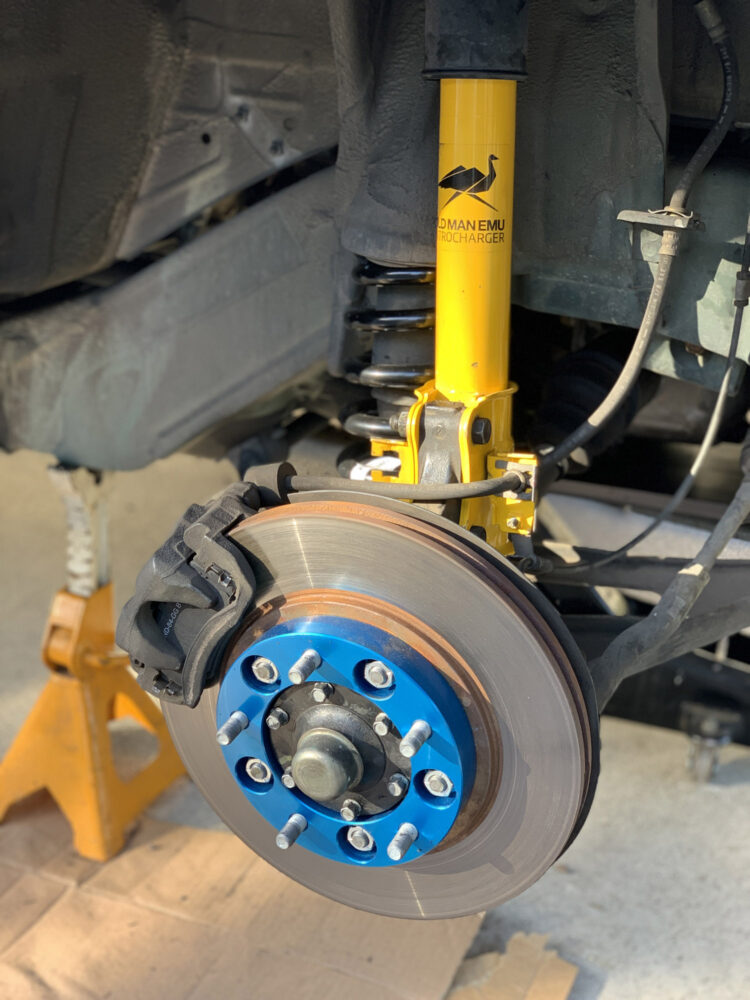 We’d get the suspension with coils and shocks for a little less than $1,000 and have it professionally installed for around $700. For our money, we’d get about an inch and a quarter of ground clearance. With the bigger tires, that would give us a two-inch bump total. That would bode well for the Suzuki as they weren’t necessarily designed for heavy off-roading. Their lowest point is the well-plated gas tank that sits at the far rear of the truck. Pick your lines carefully.

We had high hopes that the larger tires would fit under the body and with some inelegant removal of plastic wheel well material, we eliminated the rubbing. Note to other modifiers, because of the brake calipers on the front, you will need 1-inch spacers to accommodate them if you choose to get new wheels. We found this out the old-fashioned hard way when the wheels wouldn’t turn after first installing them. We grabbed four spaces from Spidertrax Off-Road for about $100, so our stance would be uniform. We like that the wheels don’t stick out bro-dozer style but give us a little more width for stability. 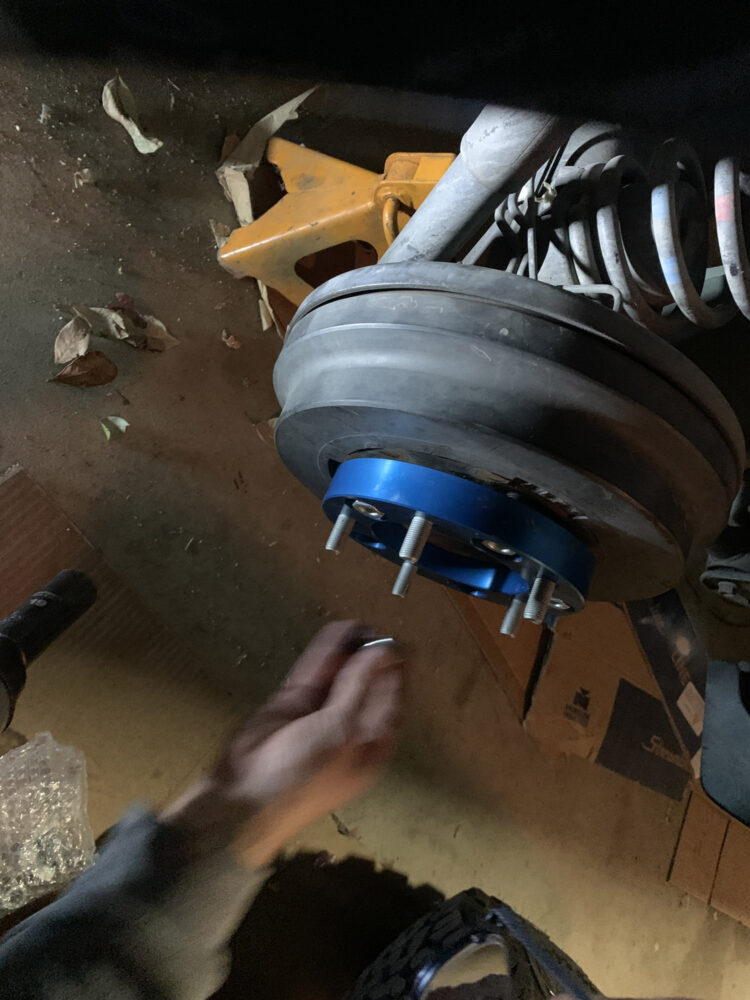 The decision to install a roof tent or not was an easy one. If you’re sticking to a budget, even the cheapest roof tents can be cost-prohibitive. And while they look cool, they aren’t a necessity. We’ve got some great pop-up ground tents that are quick to deploy and pack up, and the lack of a roof tent means we can explore without having to pack up camp every day.

We did throw a roof rack on top of the XL-7—I managed to snag an inexpensive one from Harbor Freight for $150—just in case we wanted to stash some extra stuff on top if we were traveling with more than two people and needed that second row of passenger space. 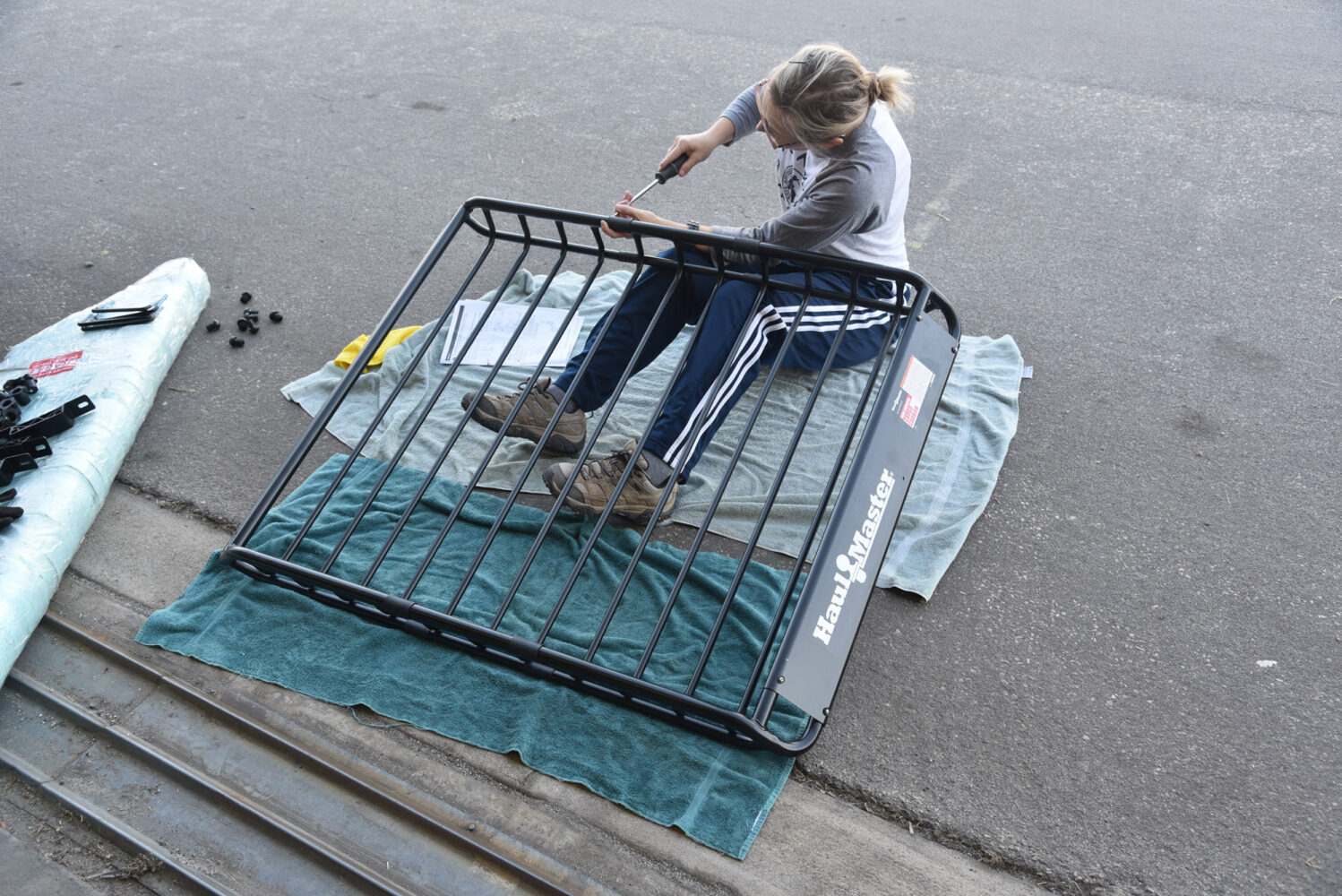 It’s foolish to head out on the unbeaten path without vehicle protection. A small company called Rocky Road Outfitters, with a local area code that covers all of the state of Utah outside the Wasatch Front, fabricates armor for oddball Suzuki Vitaras, Sidekicks, and Trackers. We covered up with a front skid plate. Rock rails were also on the menu, which we discovered mount to both the frame and the body, so what we gain in protection we lose in flex. Meh, okay. 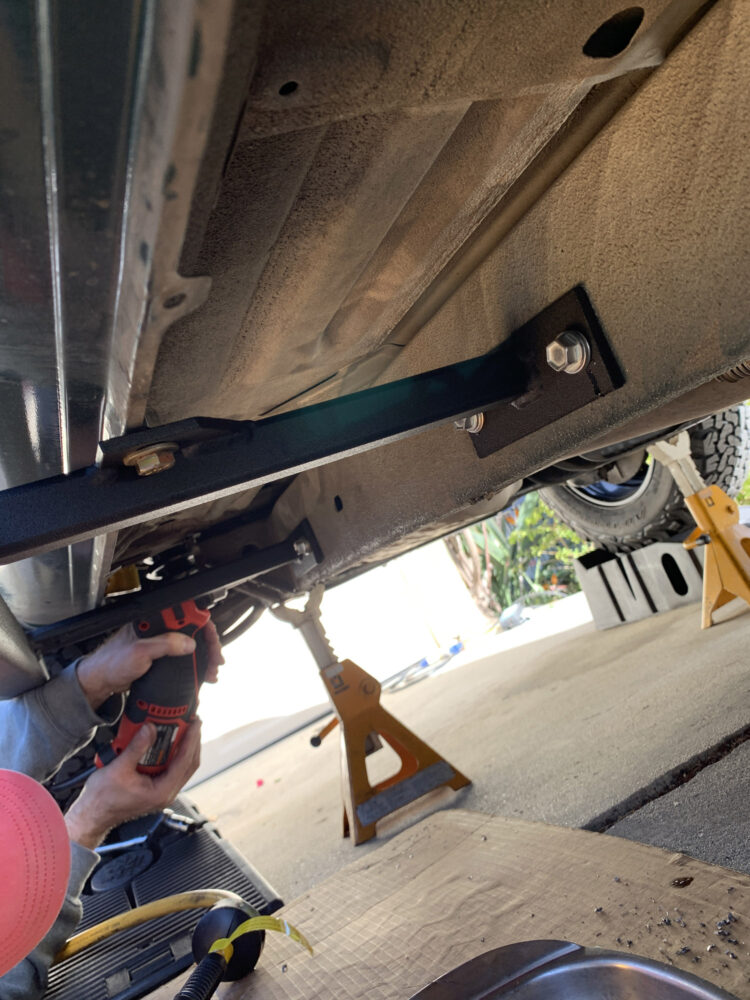 Some other minor fixes were necessary, like replacing the air-box because two of the clamps were missing and putting in a new battery so we wouldn’t run down while the all-weather ARB Elements fridge I’d gotten previously kept our food cold. If you’ve ever headed out for days on end to places without a store, you appreciate how crucial a portable refrigerator truly is. No one likes sweaty cheese and warm deli meat—not even bears. We made sure all the fluids were changed, including for the transmission, because who knows when the grandmother who owned this car before we did would have.

Geared up, the Suzuki was ready to hit the pavement. The 12-hour drive from L.A. to Moab went smoothly after an initial hiccup with the transmission fluid overflowing. Fortunately, the weather in Utah cooperated, and we’d have a couple of clear days to test out our new rig before the snow descended upon us.

It will never be mistaken for the epic sand dunes in Glamis, but 48 miles northwest outside the not-so-sleepy mountain biking mecca of Moab lives the White Wash Sand Dunes with their clear view of the peaky La Sal Mountains that scrape upwards of 12,700 feet into the blue. 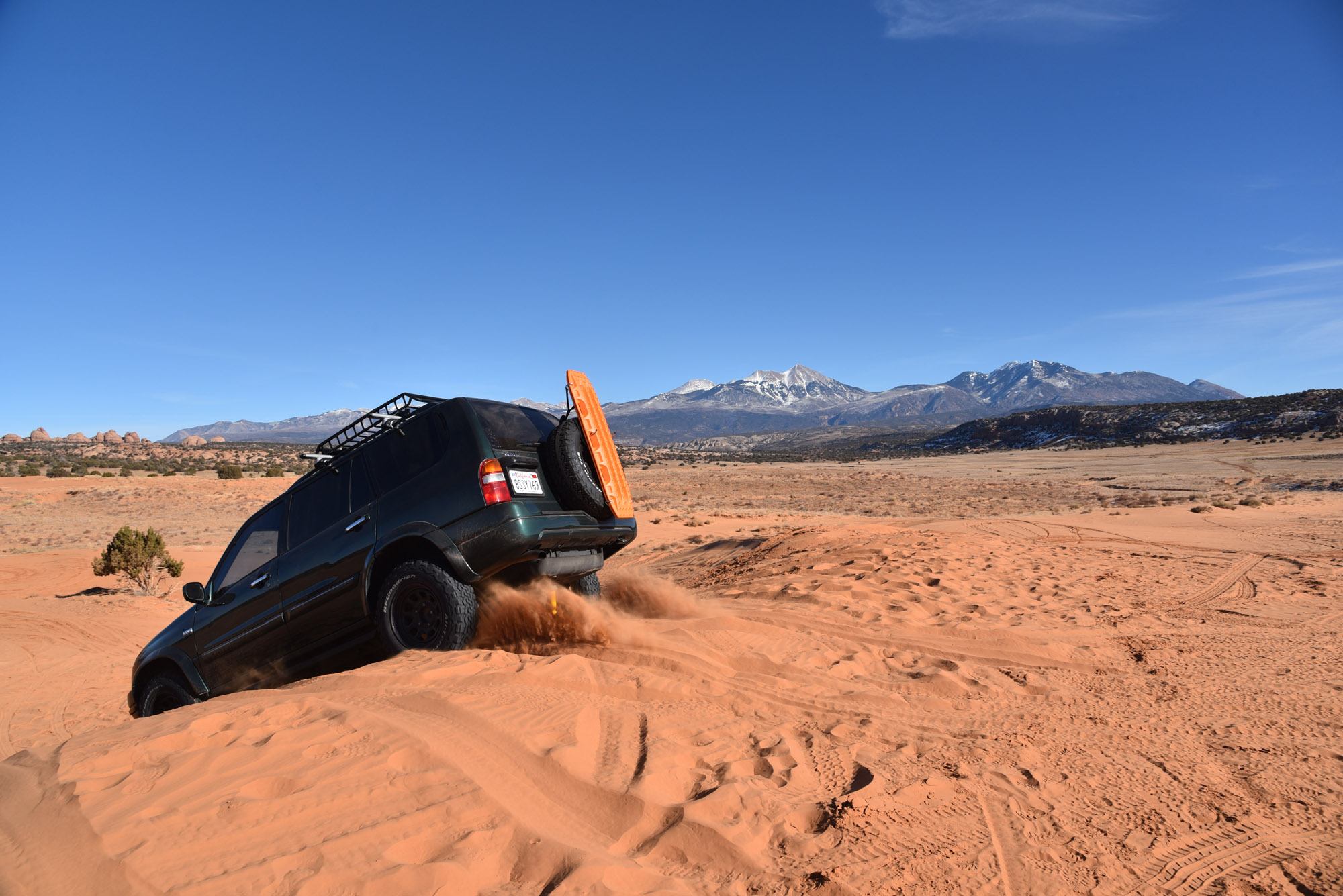 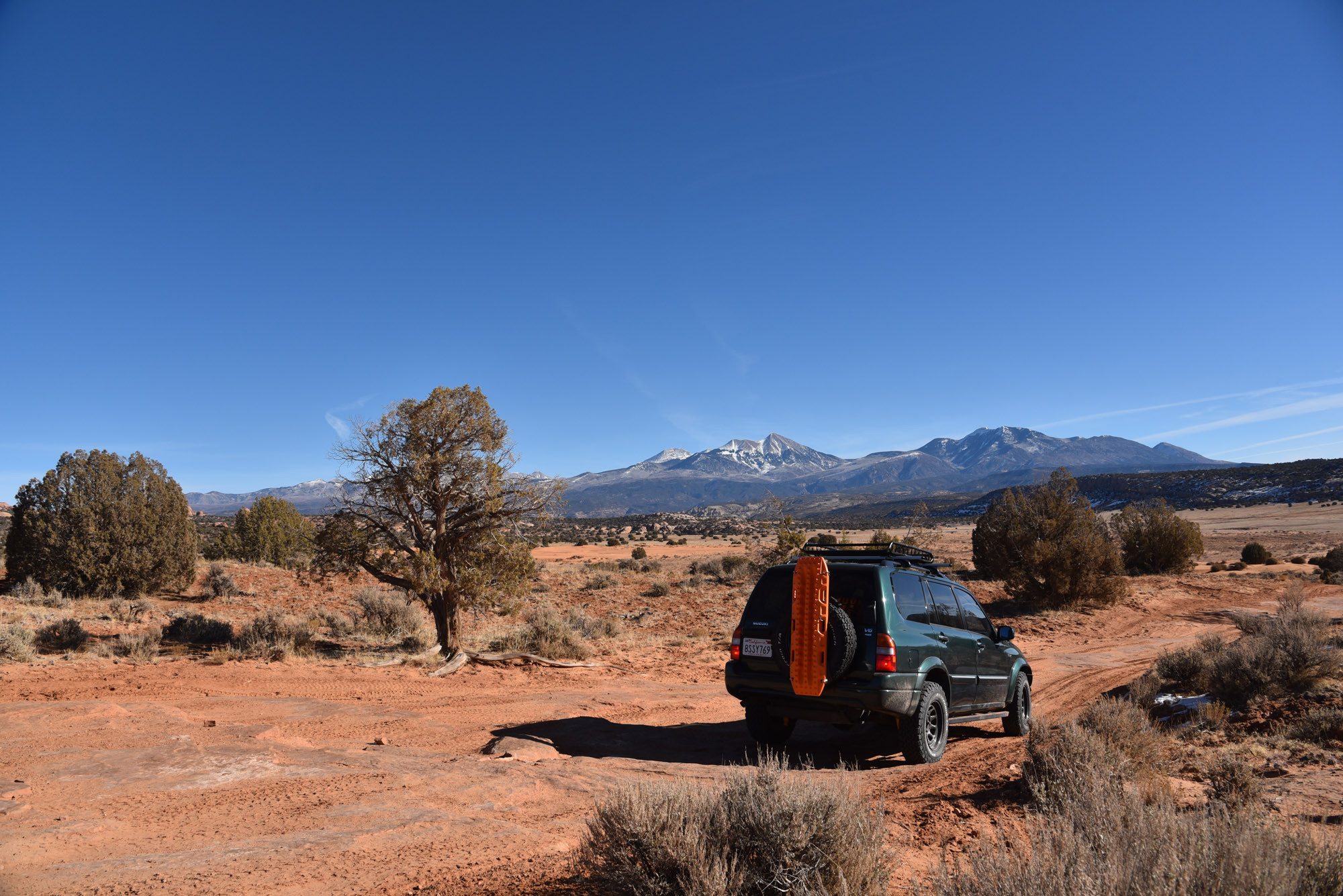 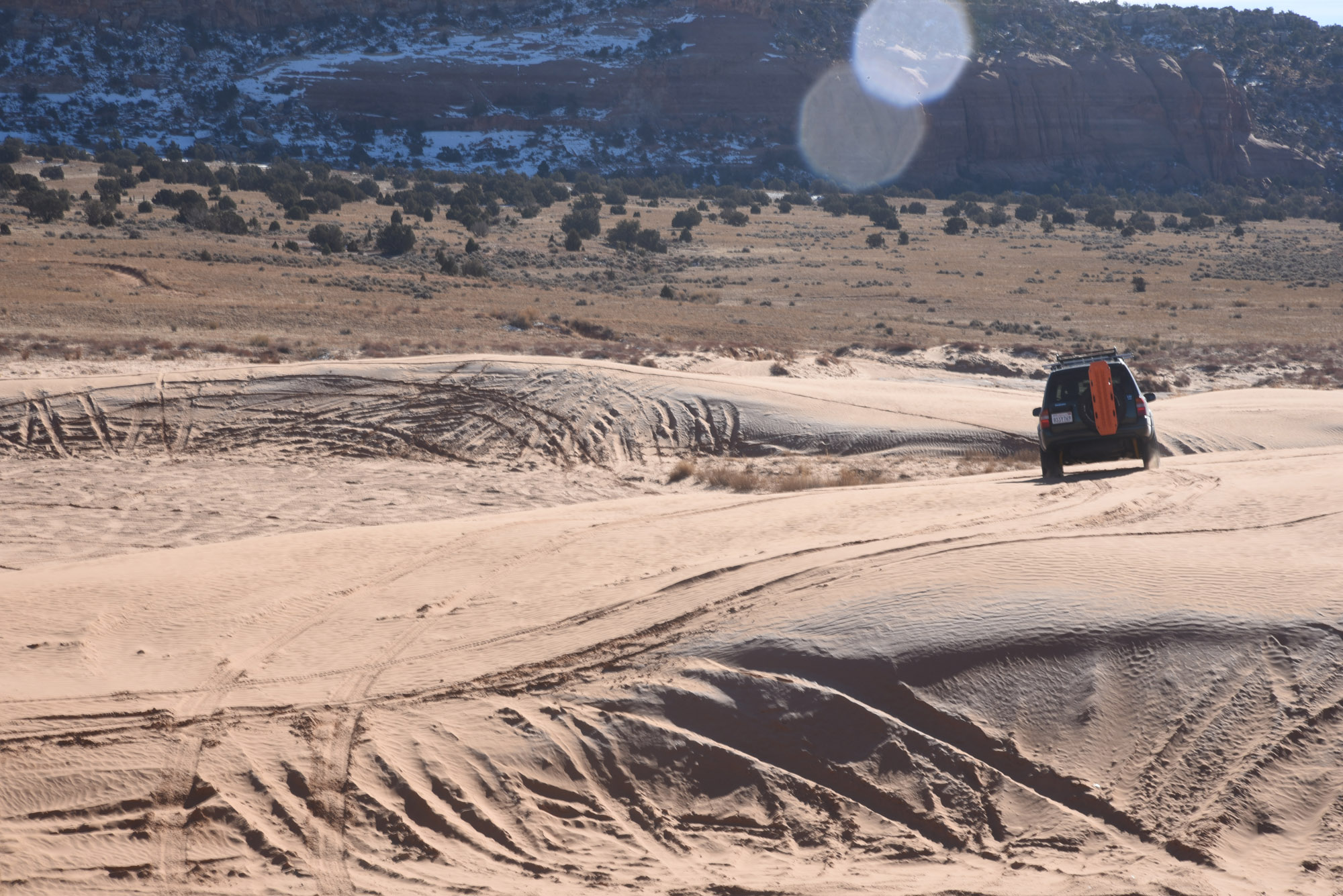 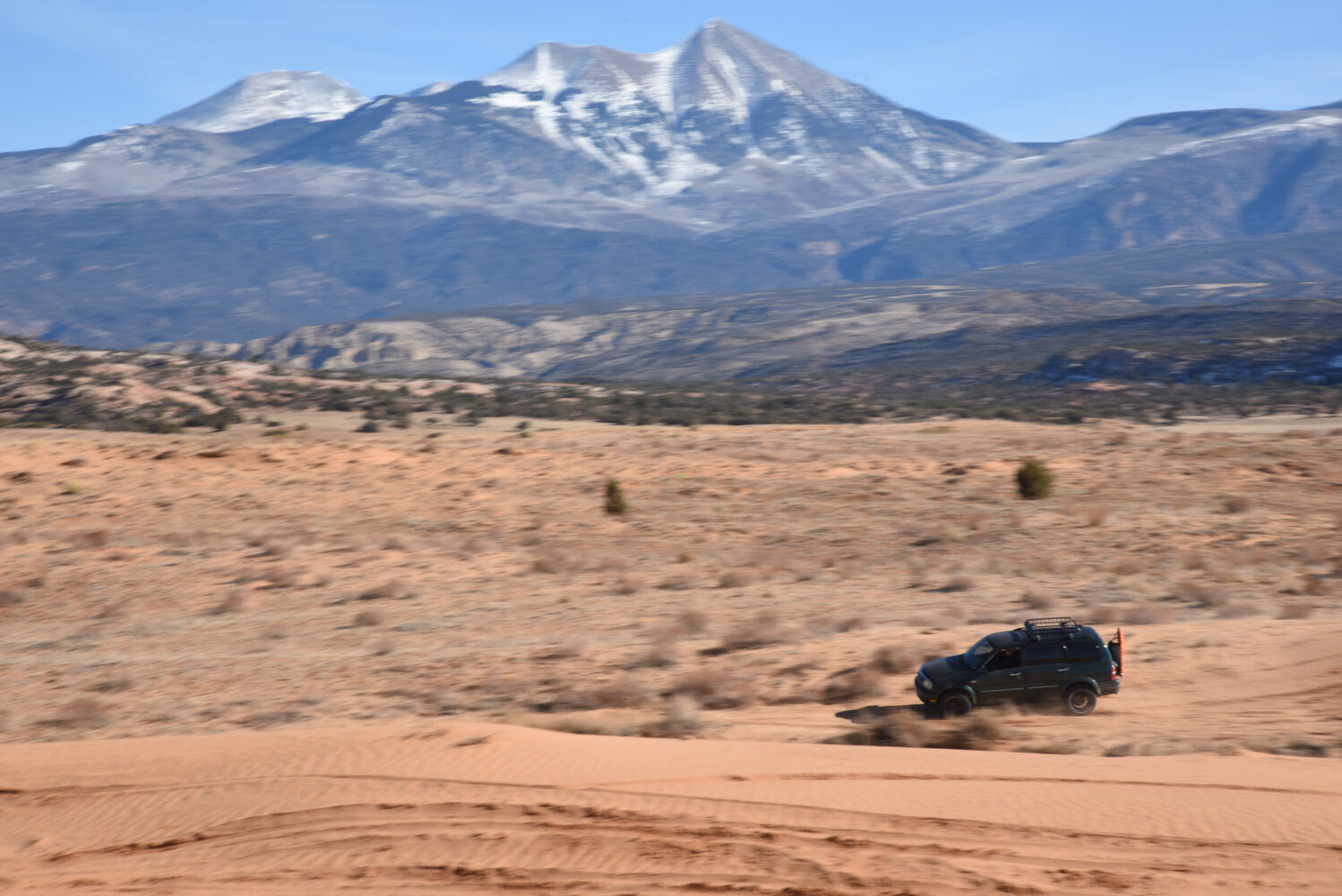 These dunes provided a fun sandbox in which to play for an afternoon. The Suzuki’s 2.7-liter V6 coupled with all-wheel drive gave us enough grunt to get over the soft-packed mounds. We were careful, however, not to over-tax the older 4-speed automatic transmission while heaving over some bigger hills. (If you’re lucky enough to find one, you can get the first generation XL-7 with a 5-speed manual). But the real test was to come.

We hadn’t gotten a mile out from the turnoff across from the Archview Campground that takes you to the Sevenmile Rim trailhead before we discovered our four-wheel drive wasn’t working. 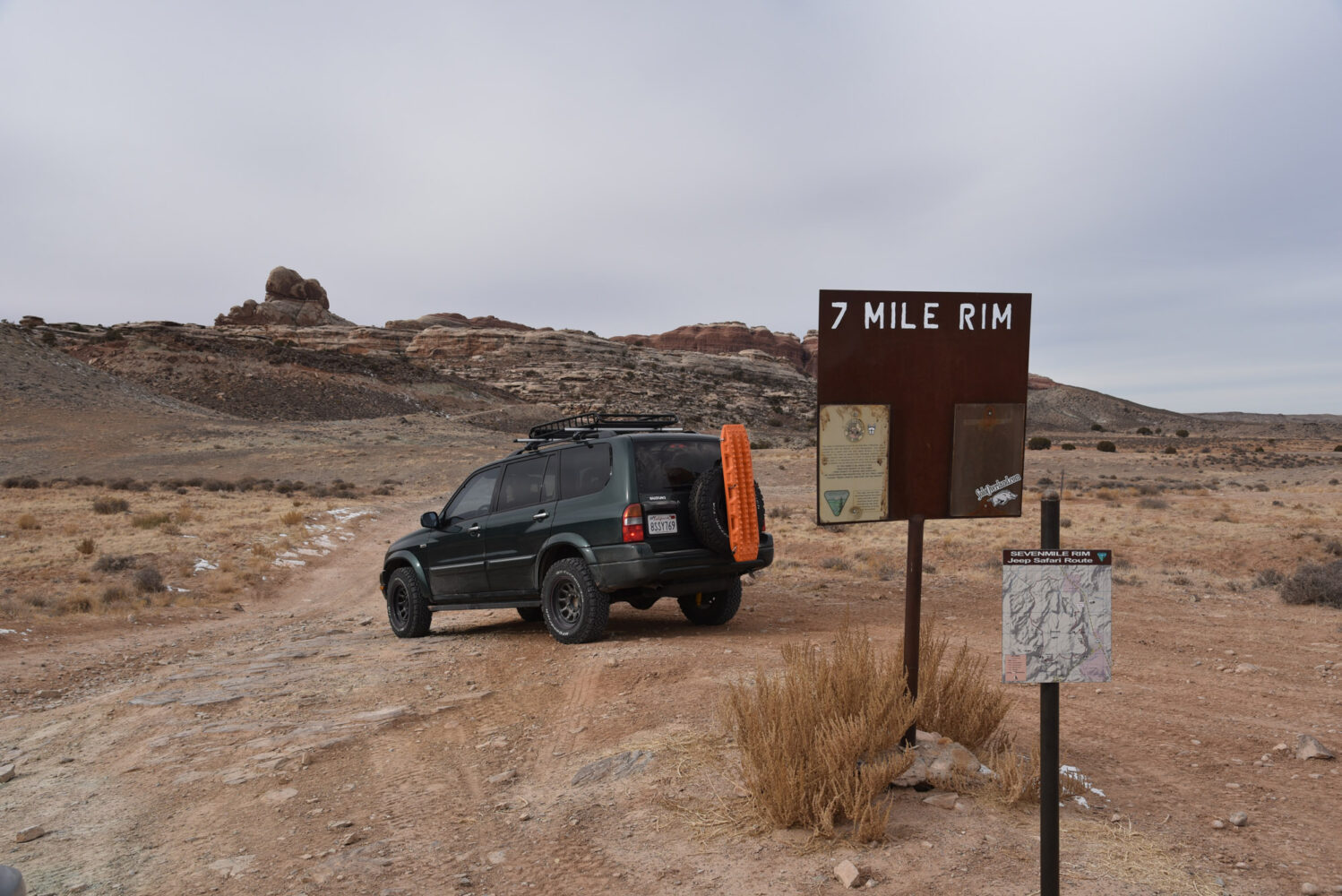 I’m not sure anything could have been more demoralizing. Crawling underneath the front end, we quickly realized that the air lines that run to and from the 4WD pump were old and cracking. A quick MacGyver trail fix got power to all four tires before too long.

Sevenmile Rim Trail gets a moderately difficult rating by the Bureau of Land Management, but for our little XL-7, it felt as though we were tackling the Rubicon. We took our time. 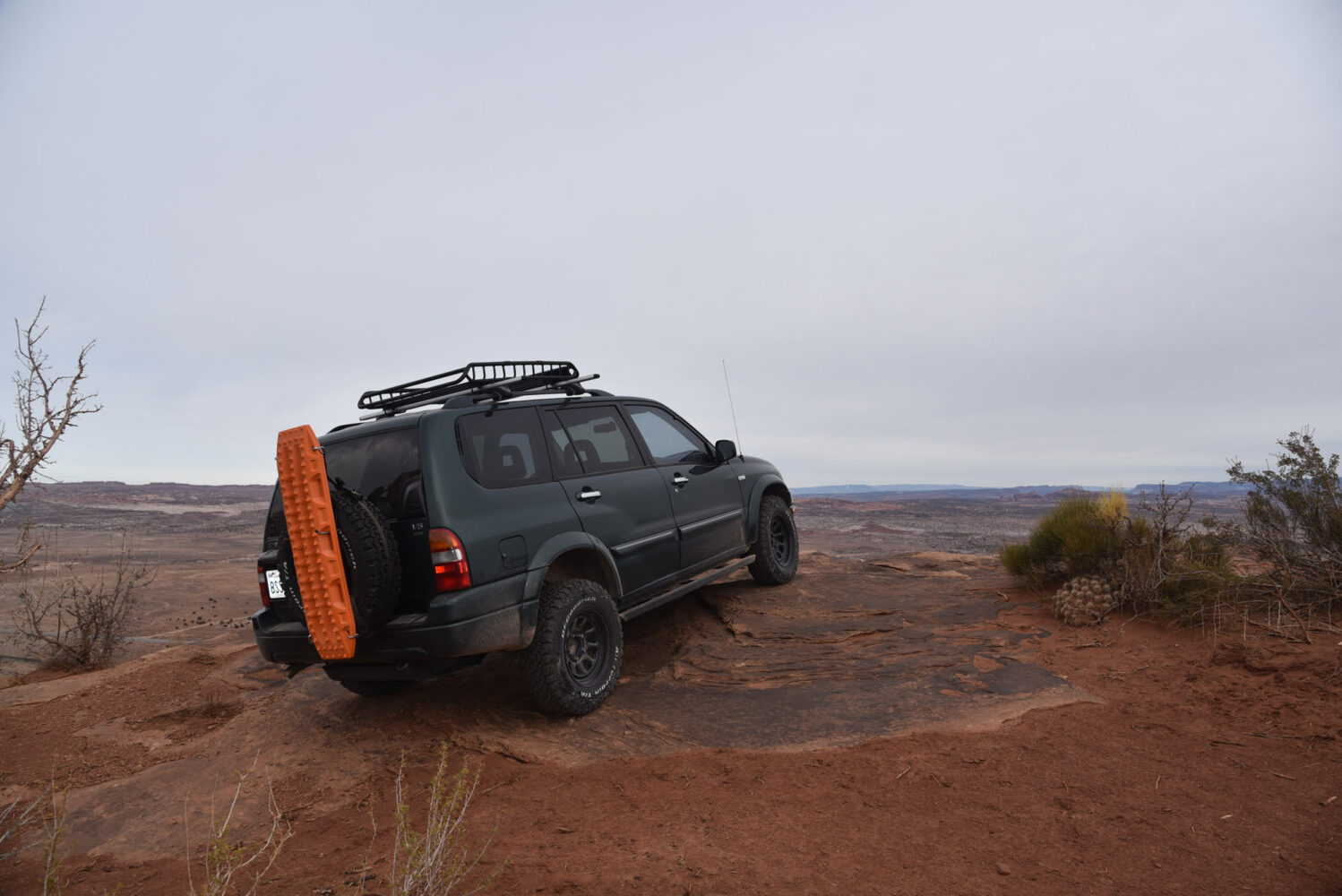 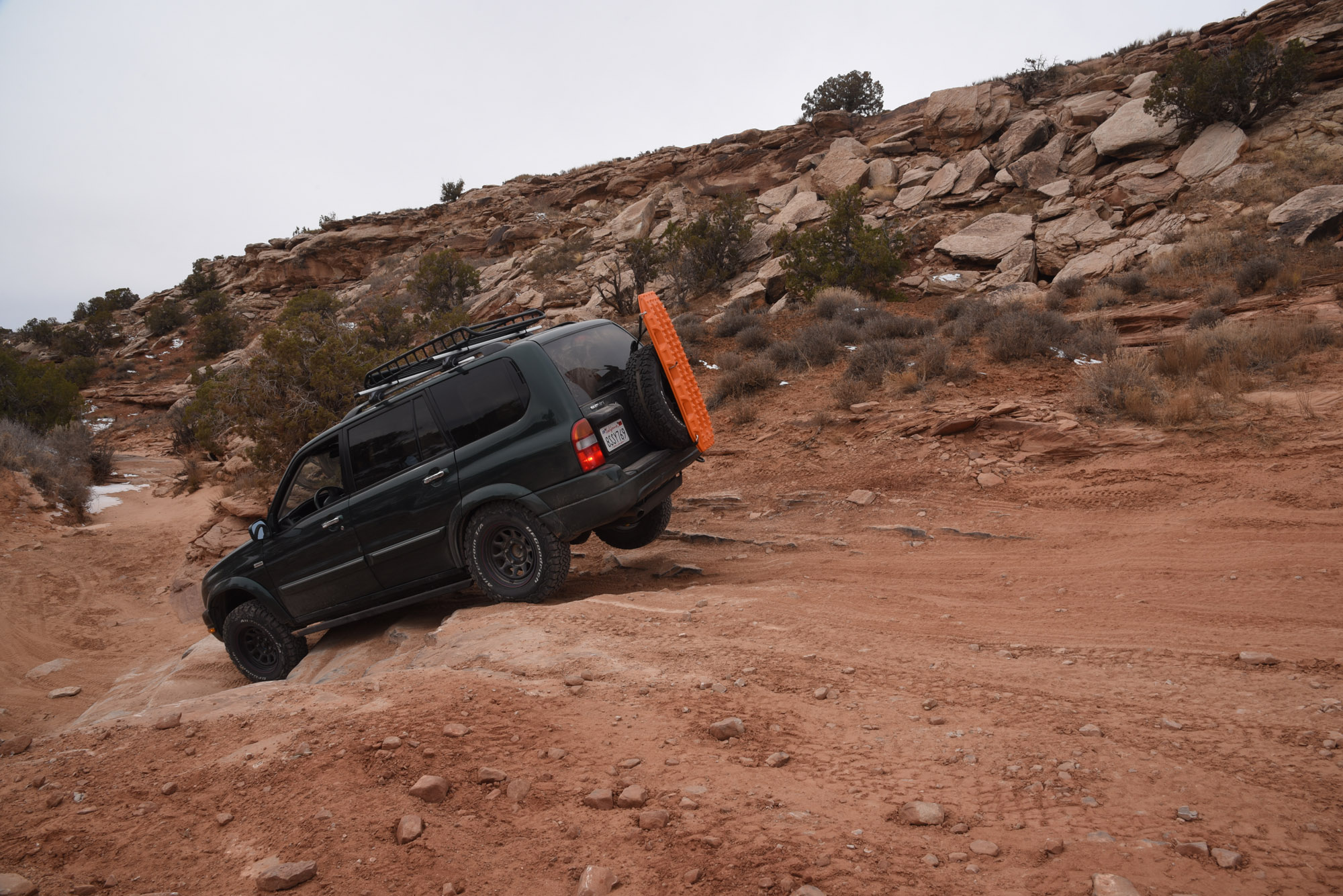 The dark clouds looming above us were no enticement to speed up the process. We picked the easiest lines we could find around the 20-mile loop. “Don’t forget you have to drive it home,” one of my favorite bumper stickers reads.

The KO2 tires gripped heroically, and the extra clearance from the suspension gave us just what we needed when we weren’t making driver errors and scraping our underbelly over steep steps. The Suzuki proved a worthy trail buddy as we descended to Uranium Arch and then sallied on to the monolithic Monitor and Merrimac Buttes. The only thing small about this place was our little truck. We did it. 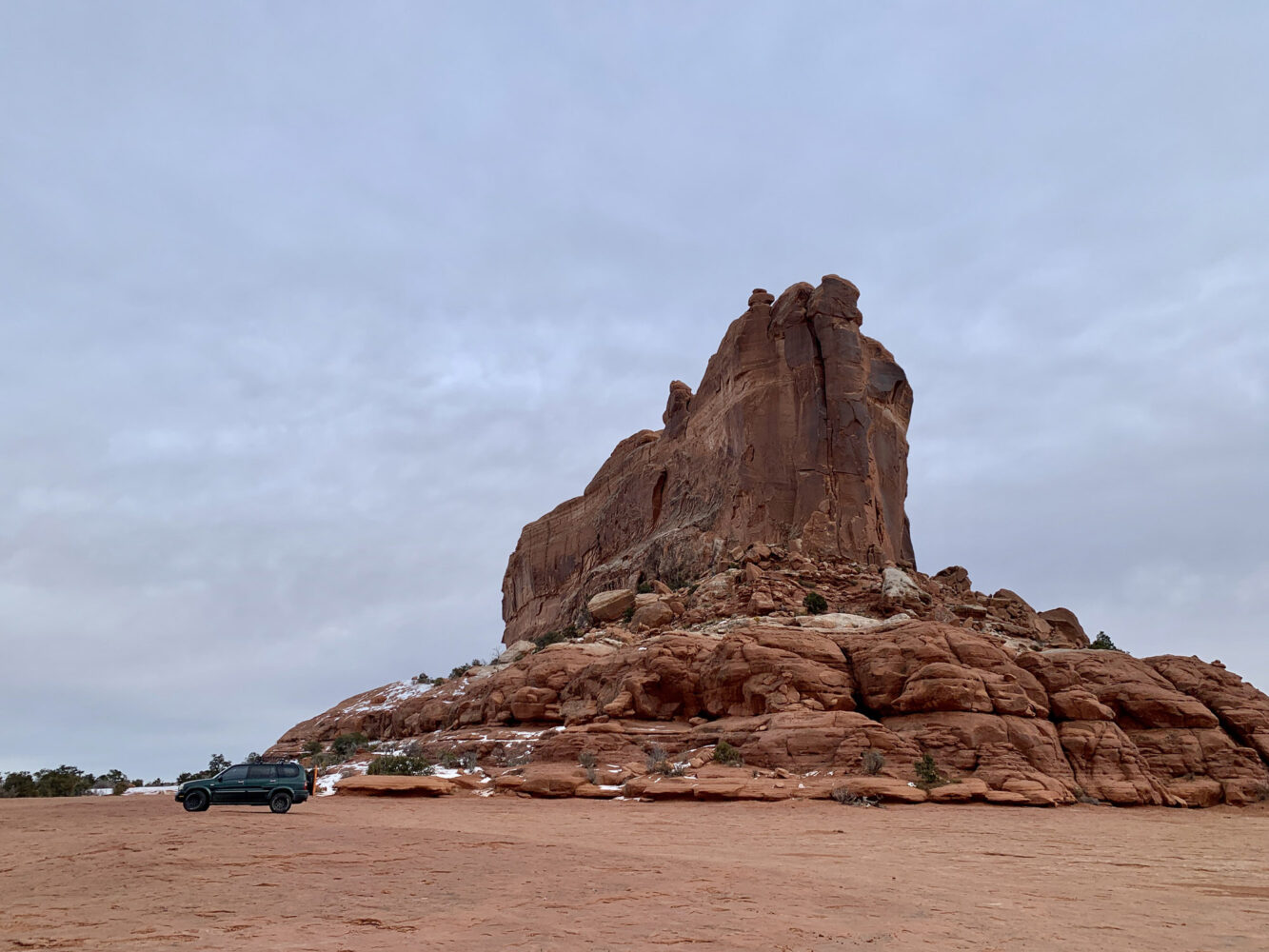 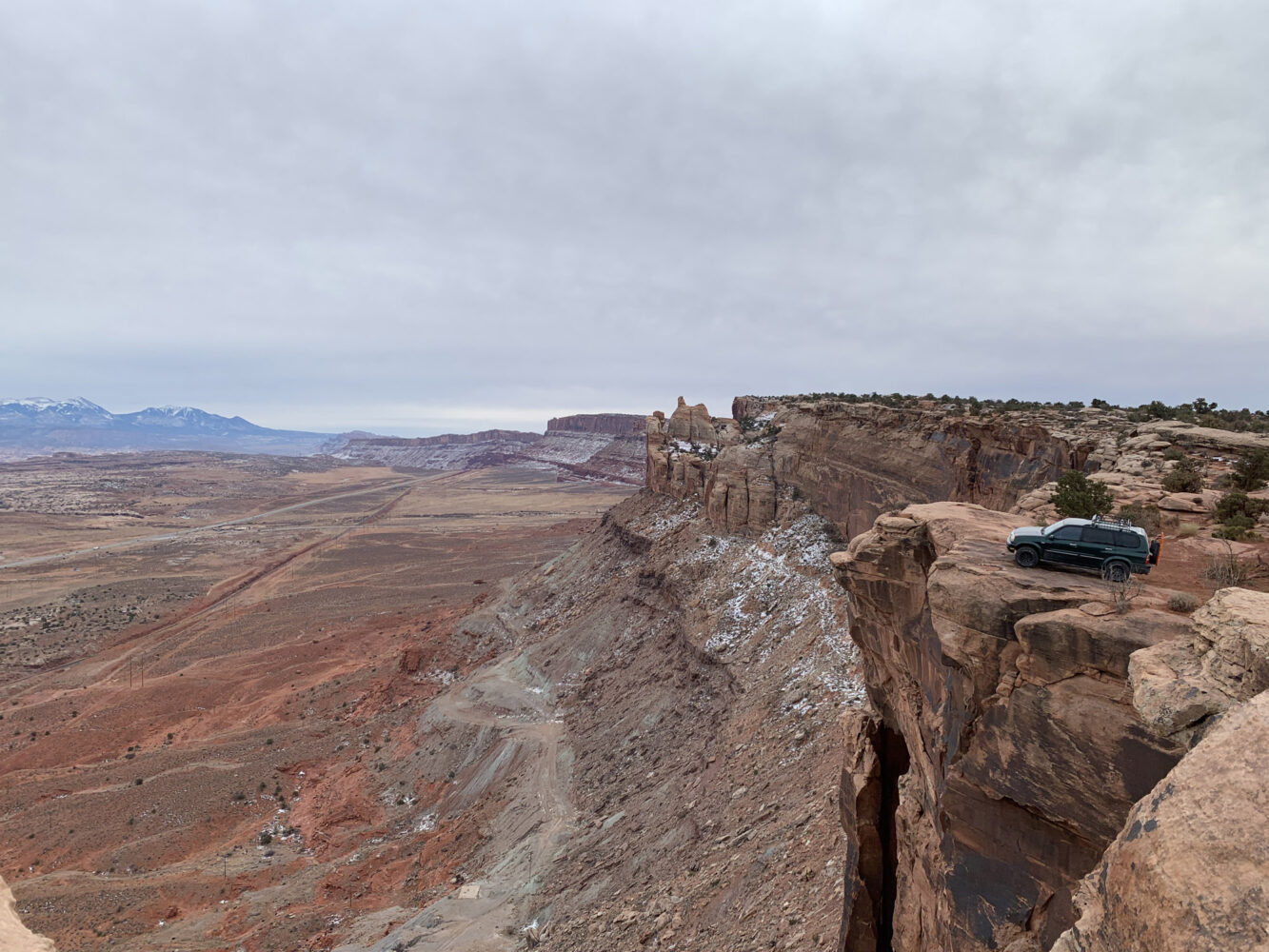 With the test behind us and the Suzuki tucked into its new home garaged in Moab, we cannot wait to get the Suzuki out for some contiguous days, when the weather warms up, that is. There’s already a trip planned to the remote 100-mile, moderately difficult White Rim Road that loops around Canyonlands and peeks into the daunting Maze District. The National Park Service warns that anyone attempting it should be physically fit and prepared for towing fees to exceed $1,000 if you get stuck. Fingers crossed our little Suzuki doesn’t let us down either way.

Our grand experiment proved a Pine Green-painted success. When our entire crew tallied up their receipts, the grand total for our project came to just around $8,500, including the cost of the truck. So start scouring local craigstlist.org ads now for your cheapo rig, and look out wide yonder—our little Suzuki is overlanding to a big scenic vista soon. 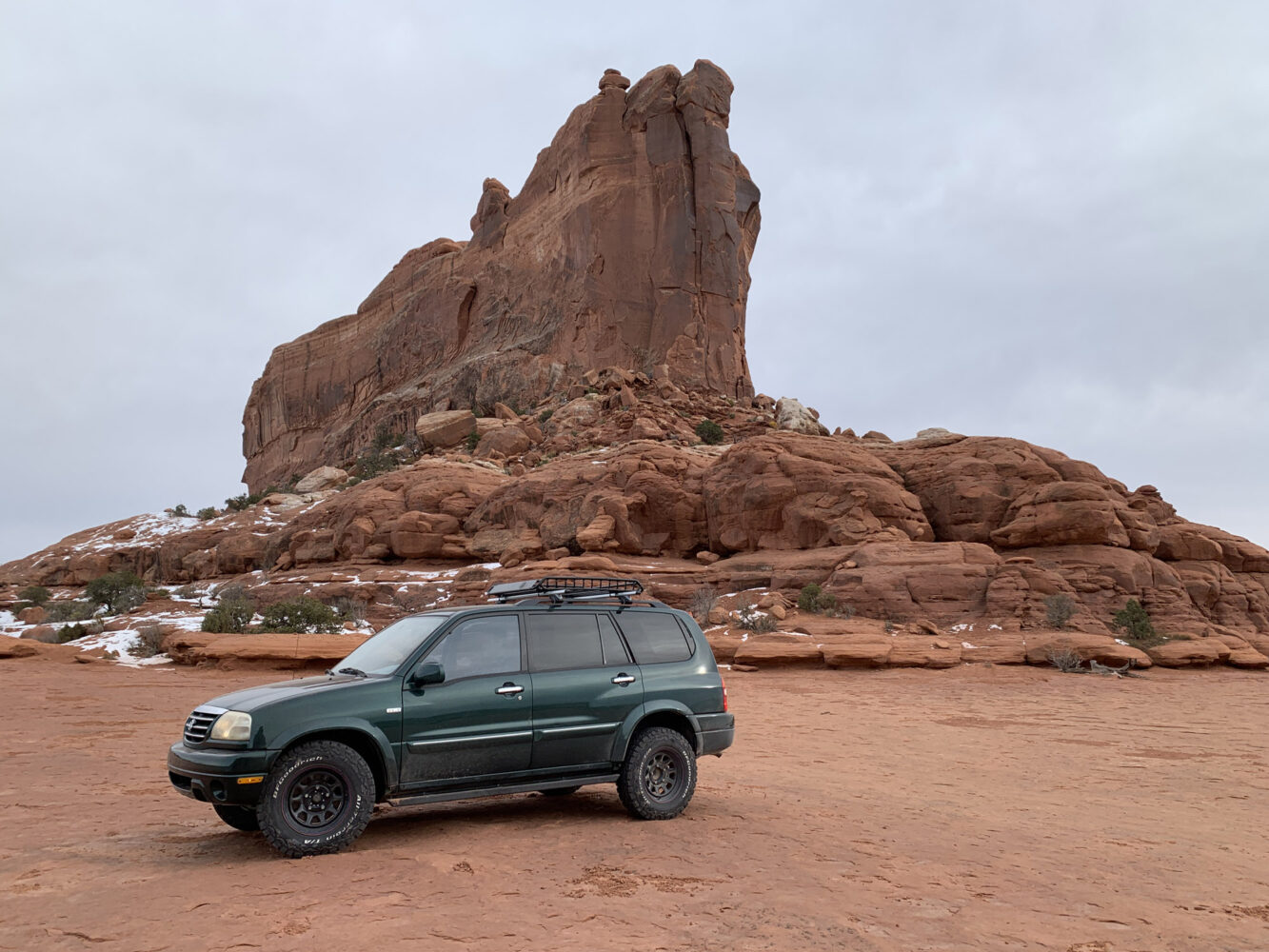 Lyn Woodward is an award-winning Los Angeles-based writer whose automotive and adventure work has appeared in such publications as Automobile Magazine, The Drive, Truck Trend, and Autoweek, among others. Currently, Woodward writes and hosts automotive video reviews for Kelley Blue Book. A car enthusiast, she owns two classic vehicles: a 1966 Datsun 1600 Roadster, and a 1987 Mitsubishi Mon- tero that she’s currently restoring. Woodward spends her spare time traveling and wheeling off the grid, but of all her off- and on-road accomplishments, competing in the Rebelle Rally—a 10-day, off-road, map and compass navigation competition—remains one of her most proud. In addition to her automotive work, Woodward answered Hollywood’s call and has had several television projects produced.