Overland Expo West is the premier overland-inspired event in the USA and will likely retain that crown in the coming decades. It is the SEMA of our “industry,” and anyone who is anyone fights tooth and nail to secure a booth in the hopes of attracting a slice of the ever-growing pie. While other industries may suffer, ours expands as overland travel offers the culmination of interests, hobbies, and skills and offers an opportunity for escape and a taste of freedom. Professional and amateur vehicle builders spend months laboring on their creations, proudly displaying them to the wind-swept world beneath a high-altitude sun. Ashley Giordano and Graeme Bell spent four days on their feet, searching the show to bring you the most interesting, creative, innovative, and desirable vehicles. There were a wide variety of vehicles on display, but while the classics stole our hearts, the full-size rigs stole the show. 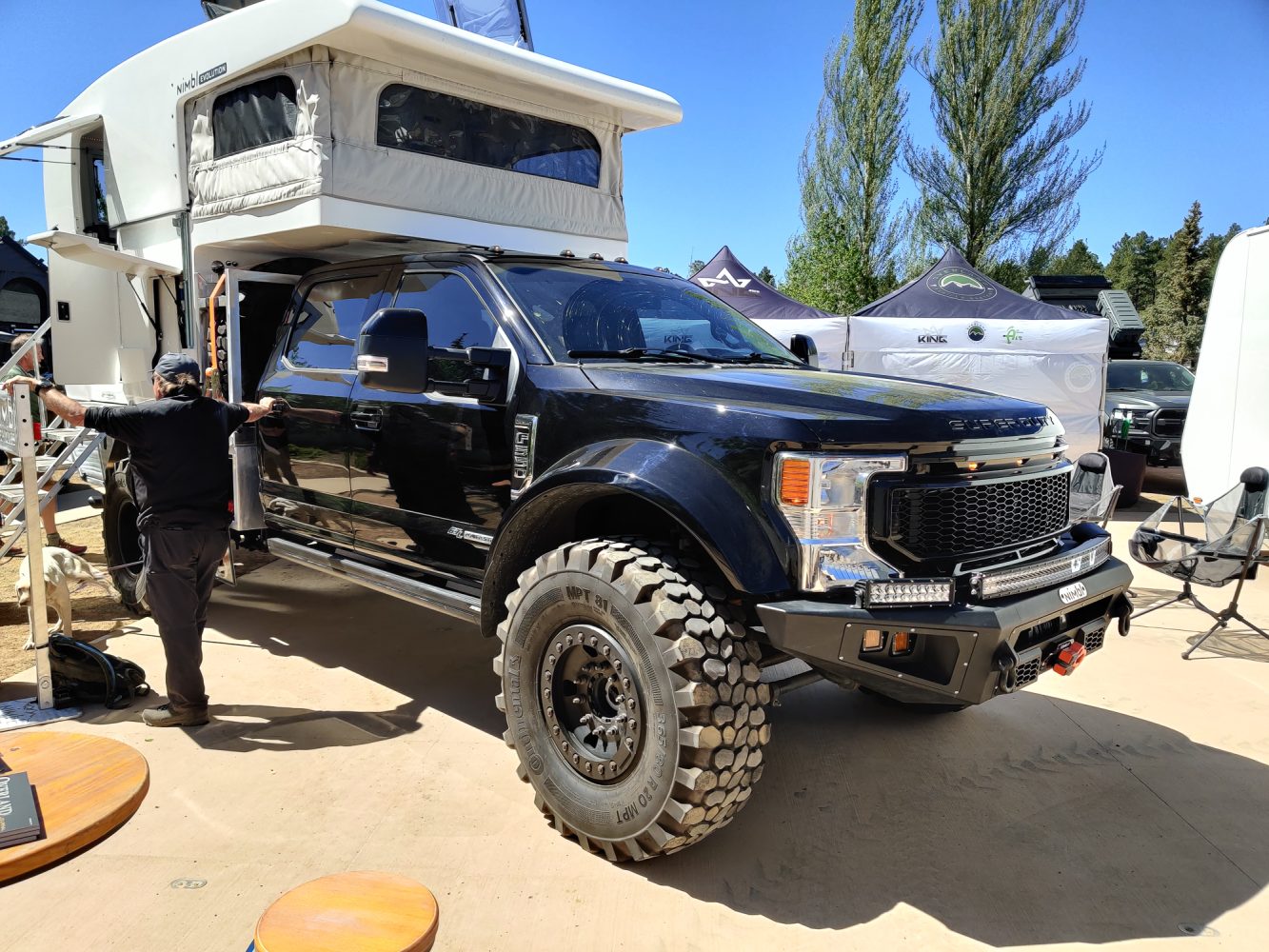 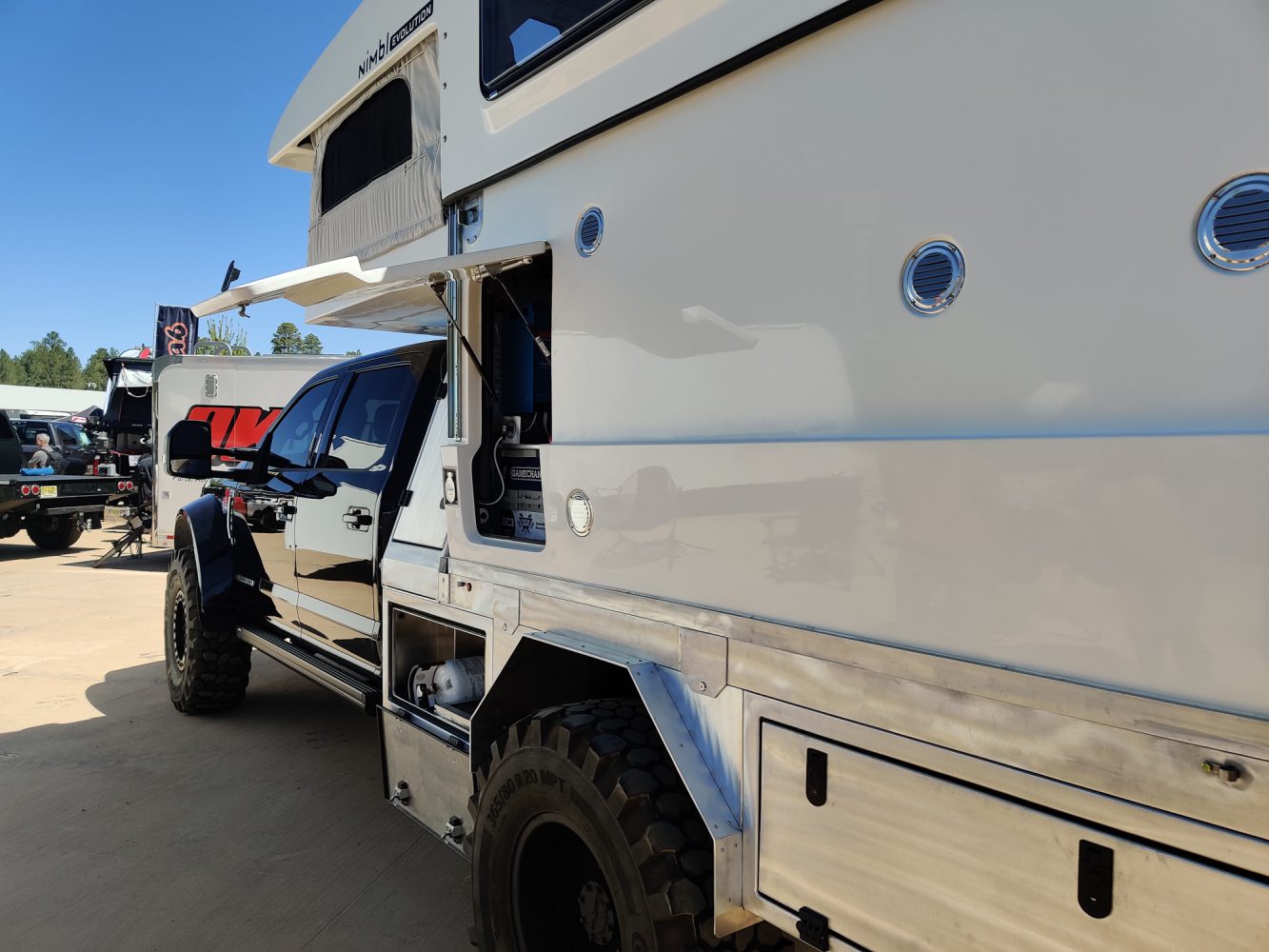 The new Nimbl Evolution was one of the highlights of the show. This mid-sized package offers power, capability, storage capacity, and luxury, and we would much rather travel with this vehicle than a large truck. Commanding a premium purchase price, the Evolution is a head-turner with a proven pedigree. 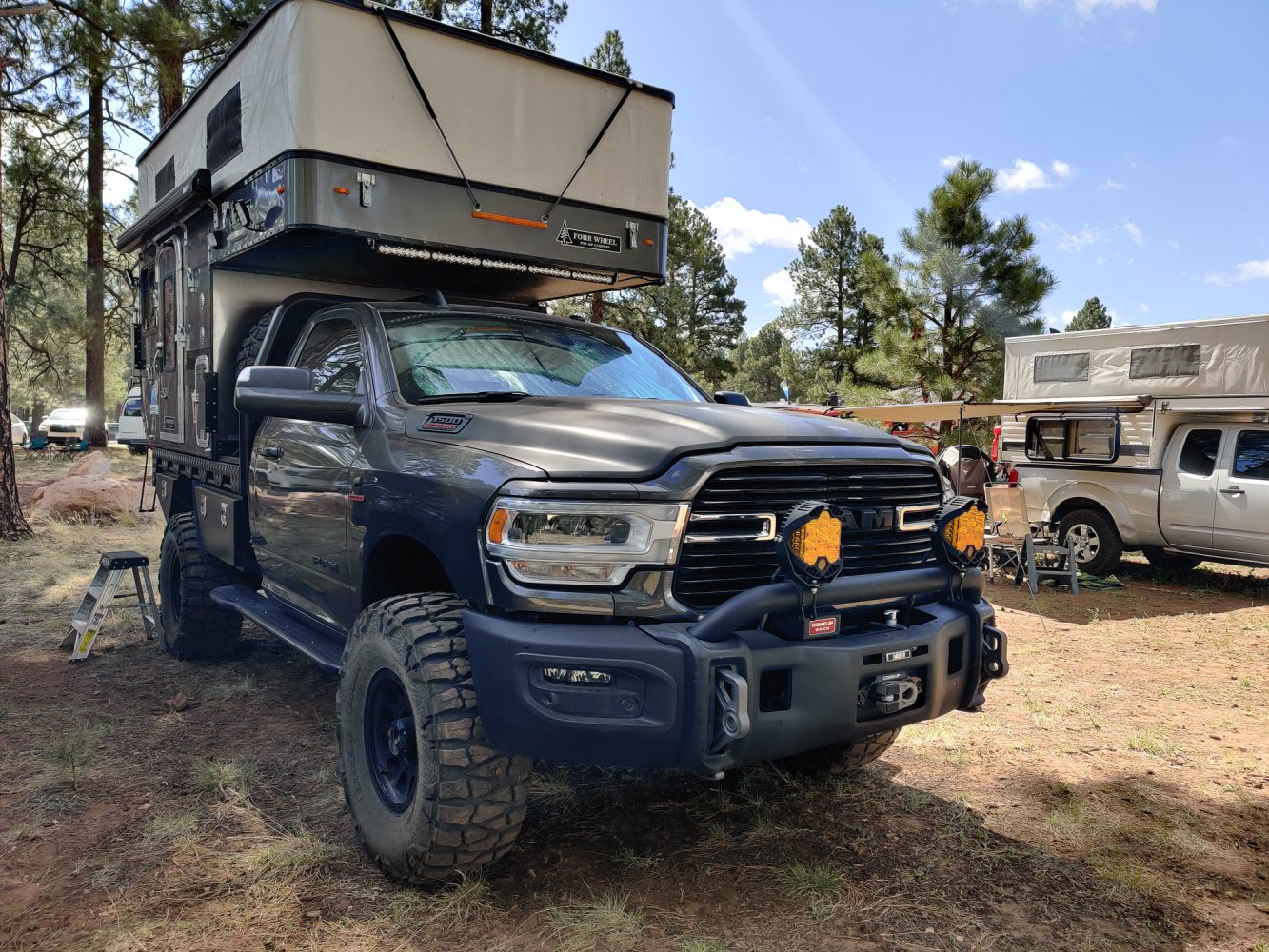 A glistening herd of Four Wheel Campers grazed in a corner of the show grounds and beckoned invitingly. A lightweight and practical camper, the Four Wheel Camper has eventually left the 1980s, and the Hawk is a functional and attractive camper that fits the full-size Ram perfectly. 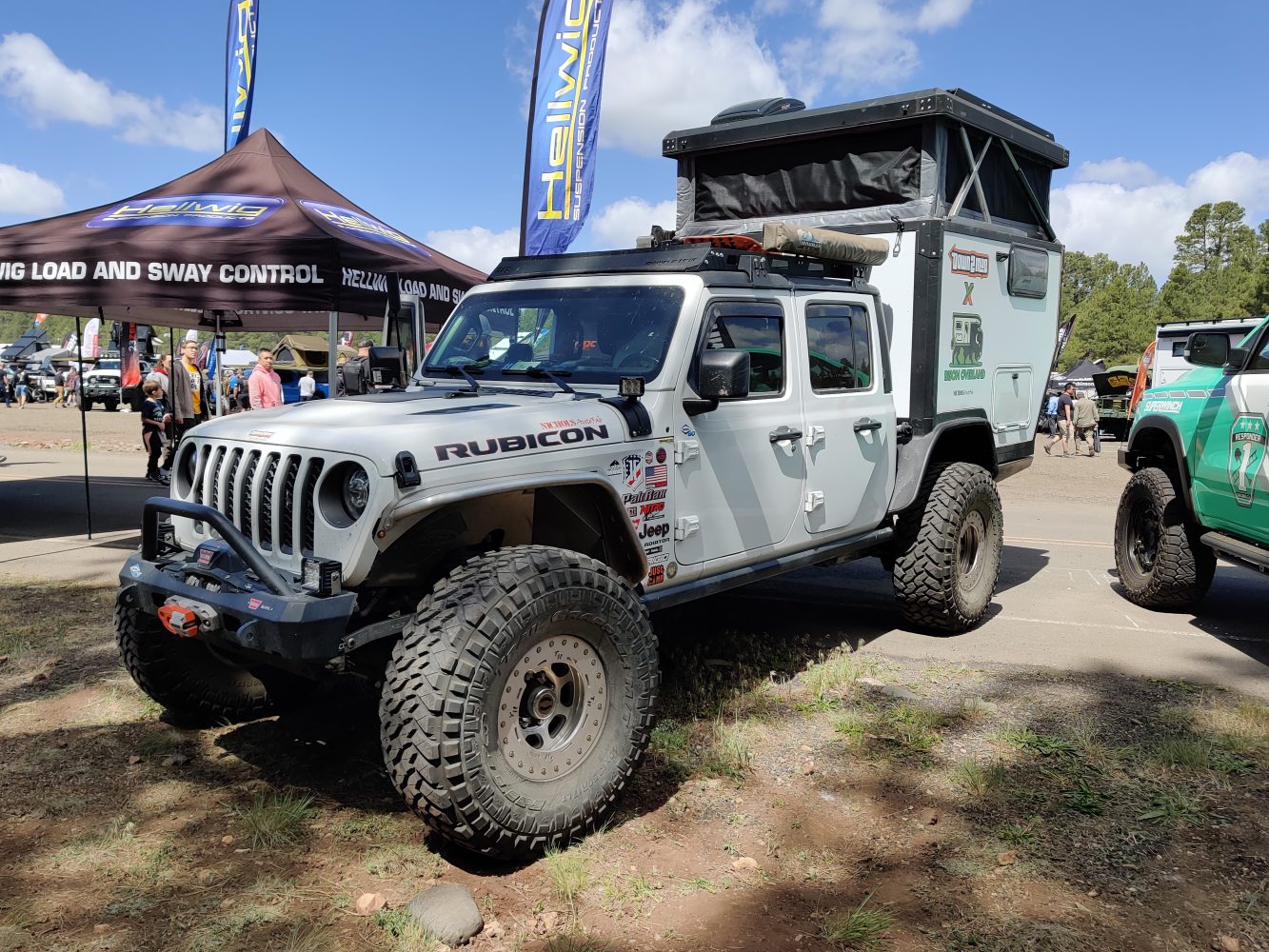 While full-size trucks offer an excellent base for general overland travel, this diminutive camper/Gladiator combination promises a vehicle capable of taking on the toughest trails. Perhaps not an option for those over 6 feet tall, the Down2Mob Bison Overland Camper will no doubt provide all the comfort that a person and their dog could ask for after a long day of low-range adventure. 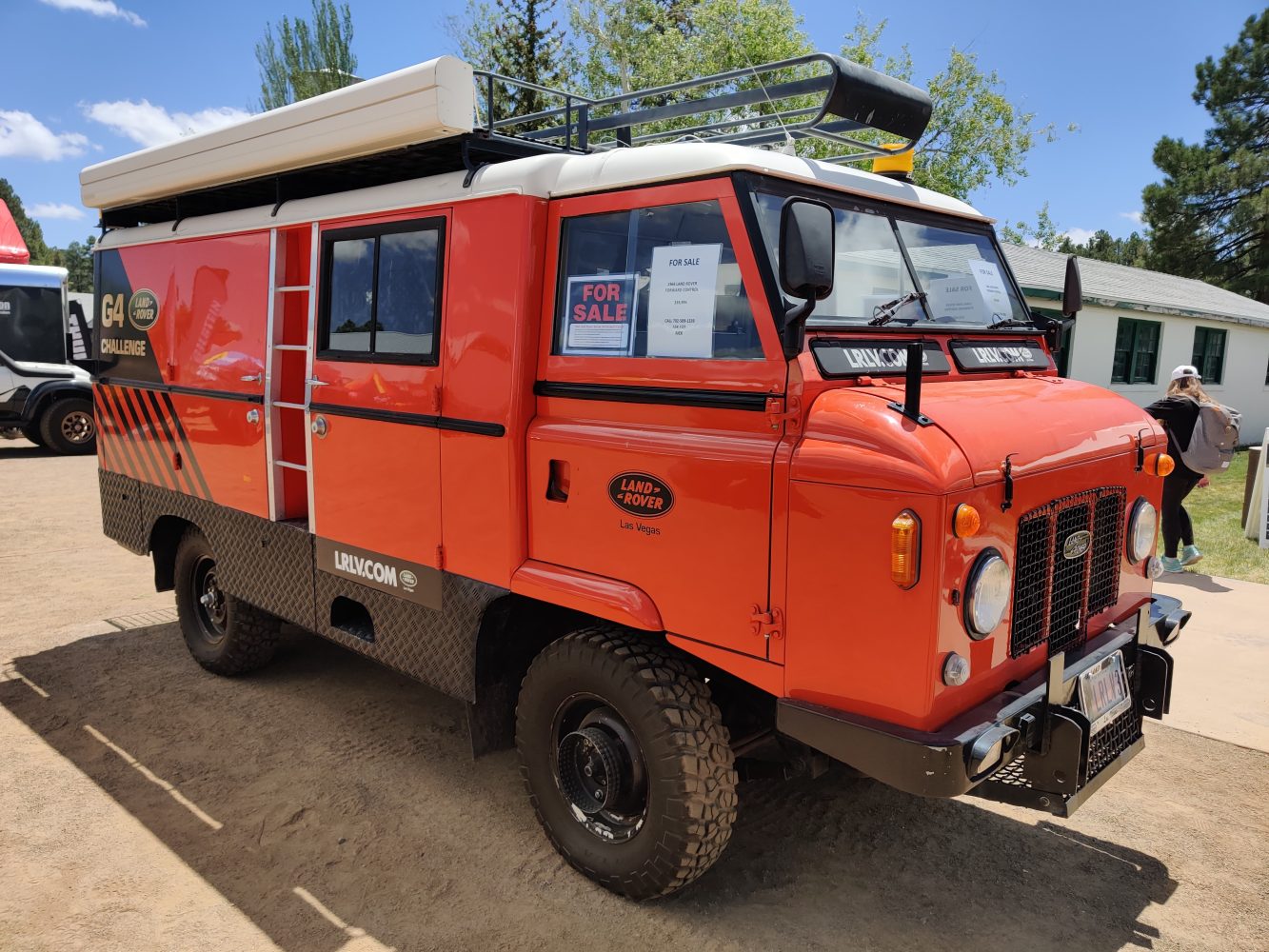 Land Rovers are to overland travel what water is to fish, and Land Rovers do important things. This famous orange Series 2A served as a Swiss fire truck before being imported to the USA. One of only 611 ever built, this beautifully maintained vehicle is for sale and likely already sold as the asking price is a fair $40,000. It has been owned and lovingly maintained by Land Rover Las Vegas for the last seven years at least. 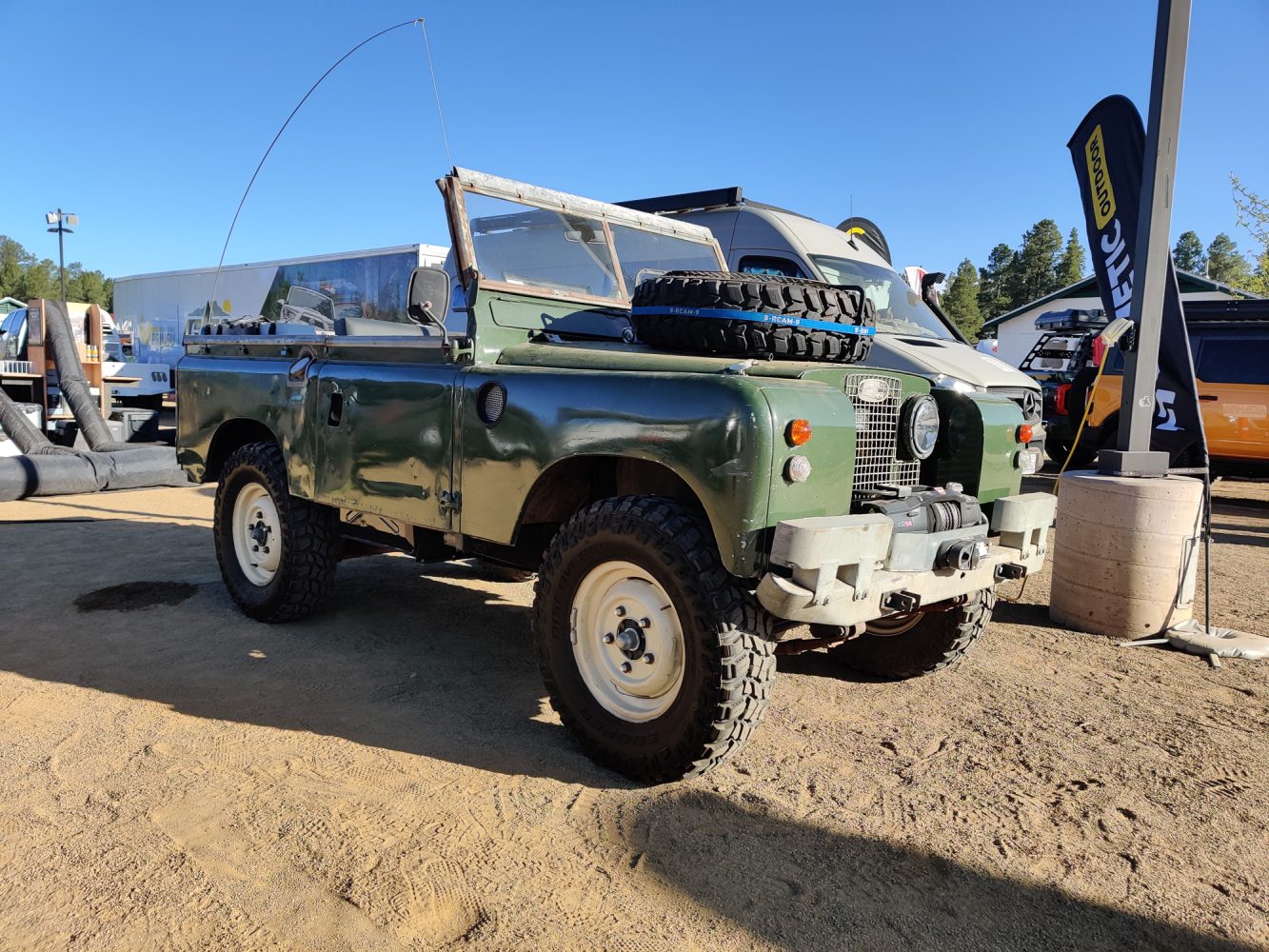 Sticking with our Land Rover fetish, Sarge is a beautifully maintained and loved member of the Mesdag family (Owen Mesdag is the Dometic Product Manager) and lives in Seattle when not on an adventure. The 88-inch Land Rover is considered a design icon due to the skillful application of the “principle of thirds” and is regarded one of the greatest motor vehicles ever produced. Throw some gear in the rear and turn your back on the interstate—this little legend is ready for anything. 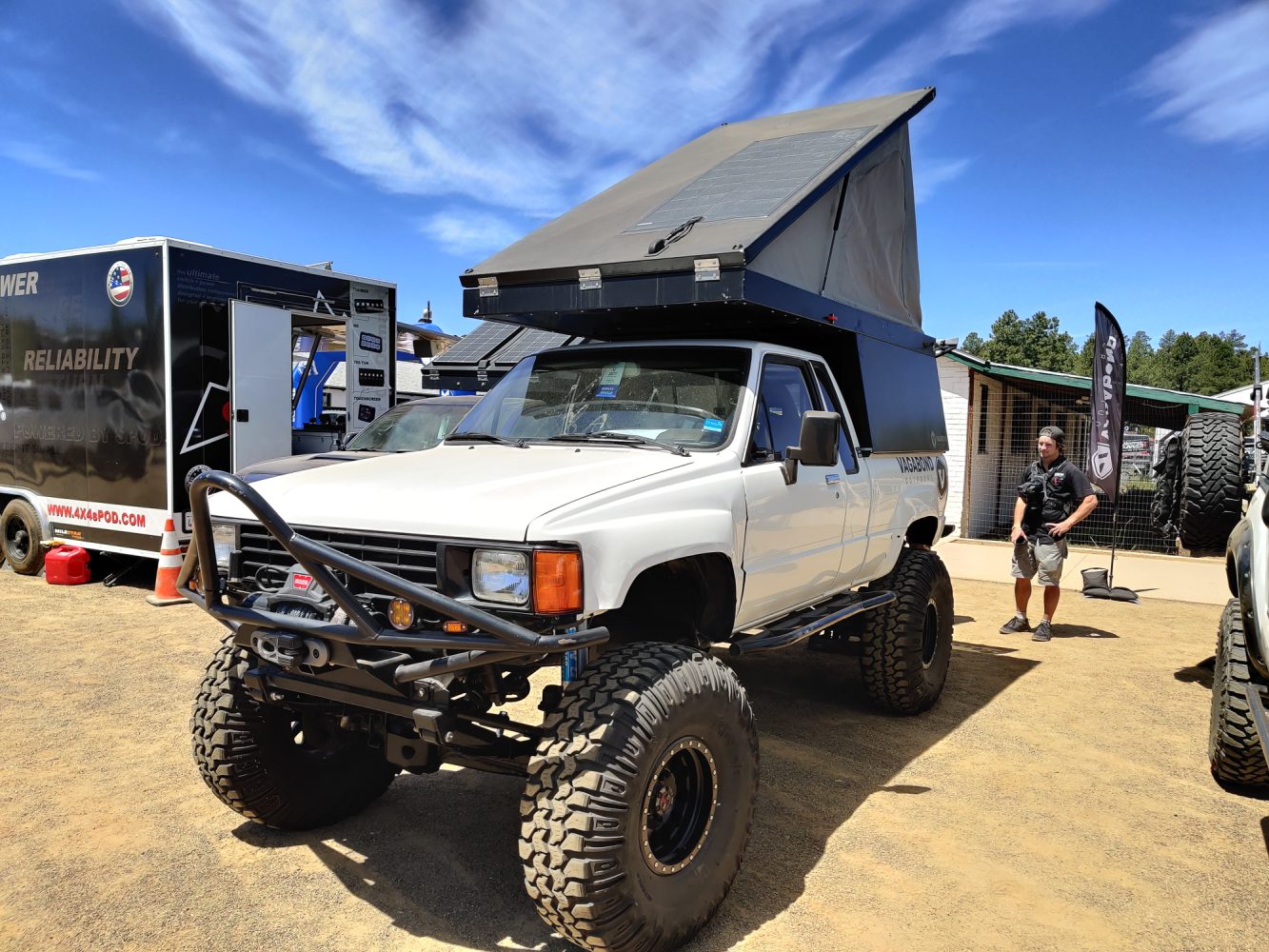 The Toyota Pickup burst into our collective consciousness as the dream car of the beloved Marty McFly. Everyone wanted that truck, and unlike many desirable vehicles, the Pickup lived up to the hype. Unstoppable and unkillable, the Pickup may be getting long in the tooth but is still an excellent base for an overland vehicle. The Vagabond camper is, like the Pickup, robust and simple with a minimum of frills. 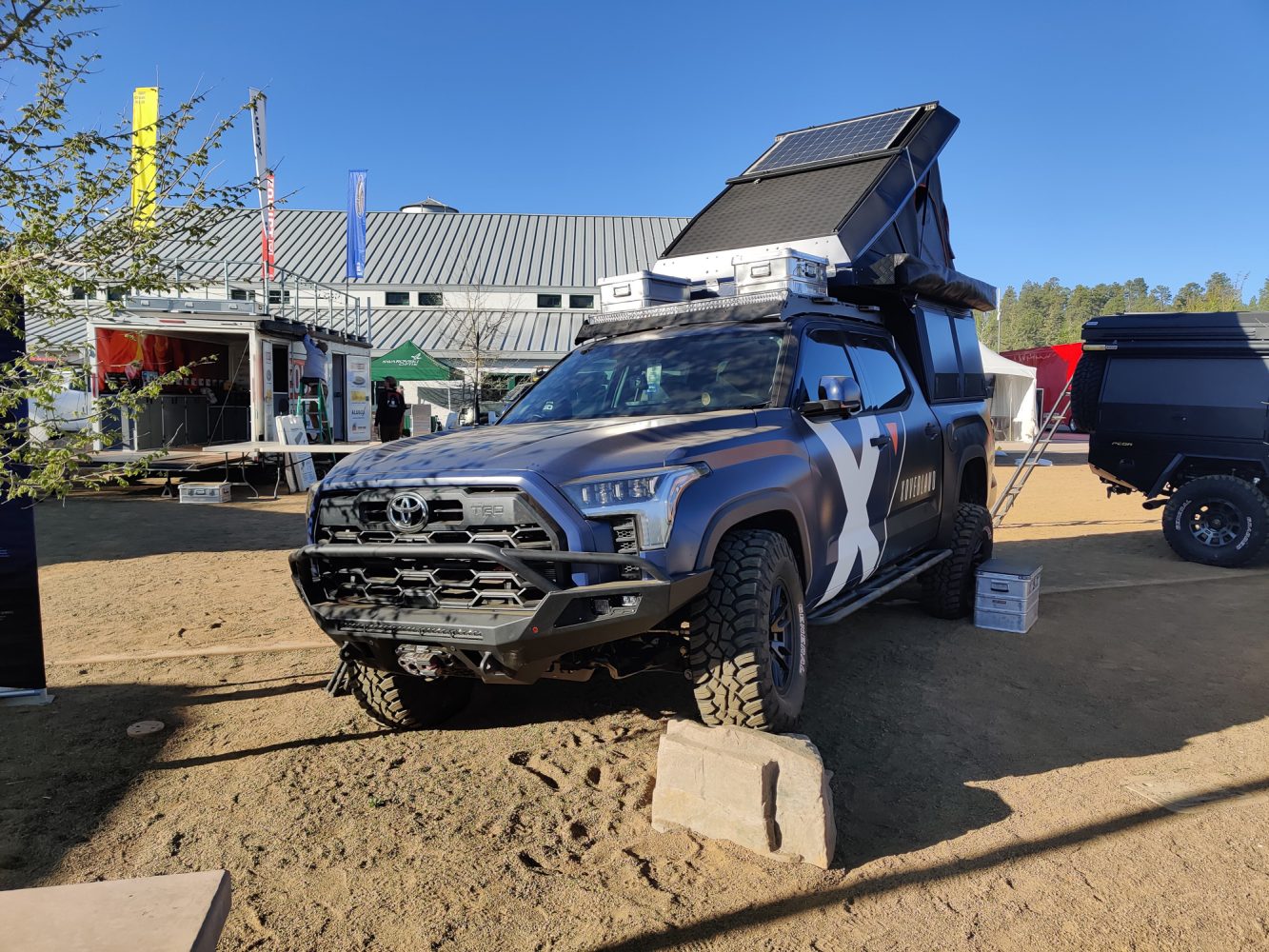 This vehicle is a showstopper and capable tourer. Being the most popular overland-themed film series on the planet, Expedition Overland has access to resources that we mere mortals can only dream of. Every element of this build is premium and carefully considered; this Tundra is one of a kind. The accessories list reads like a who’s who of the overland industry, and some of us have had the privilege of watching this vehicle come to life. 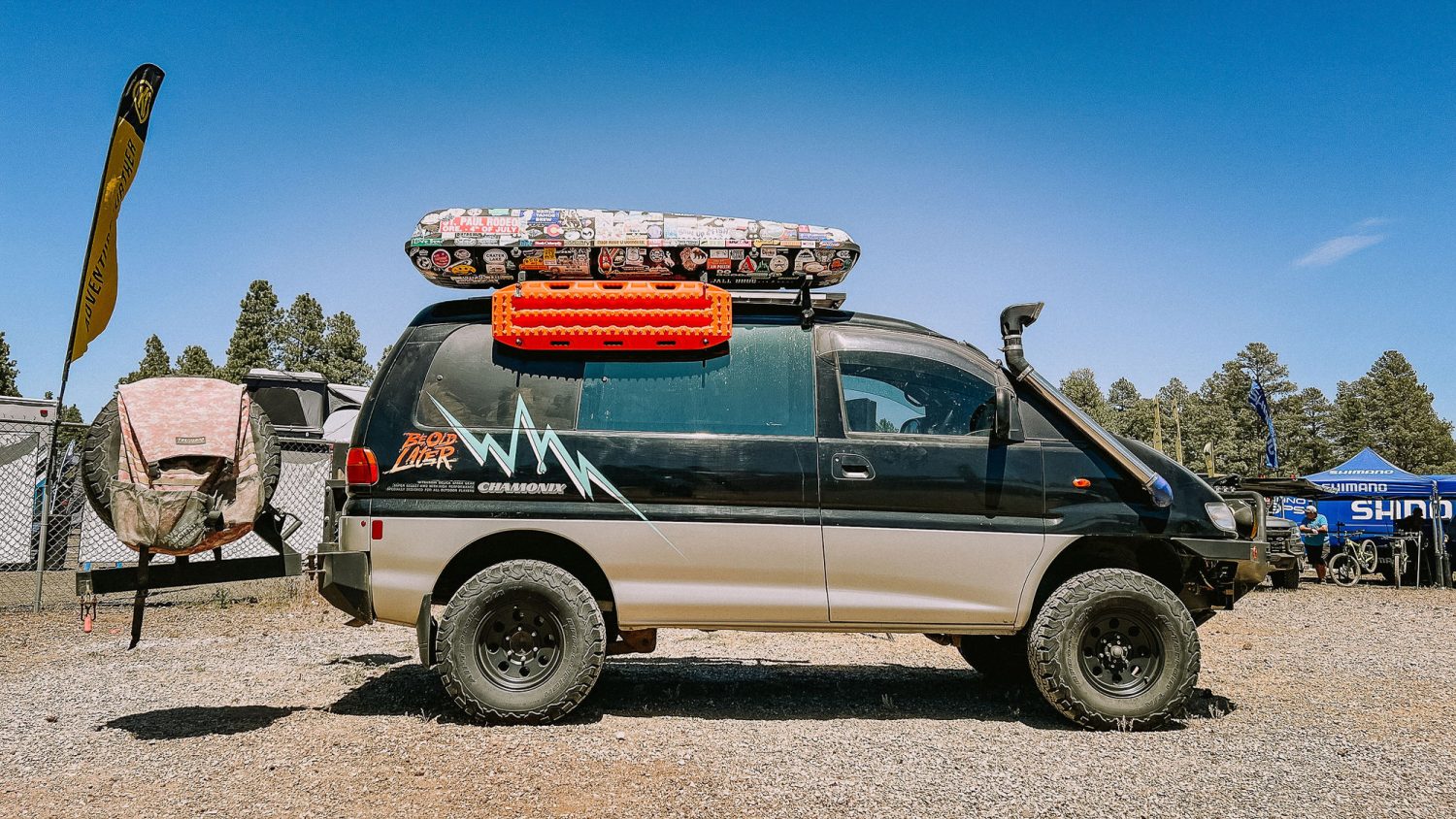 Owners Candice and Jordan drove their 2.8-liter 1997 Mitsubishi Delica from Squamish, British Columbia, to Flagstaff for Overland Expo West. While the 1,500-plus-mile trip from Canada may have felt lengthy, the Delica and its occupants have traveled much farther south, to the end of the road in Ushuaia, Argentina. Featured in the KC Hilites booth, this short wheelbase, high-roof model features a sleeping platform and cabinet, kitchen pullout and fridge, and cedar tongue and groove flooring inside. Other accessories include front and rear bumpers by Coastal Offroad, custom vinyl decals, a solar and electrical system, and Dometic CFX-35US fridge. 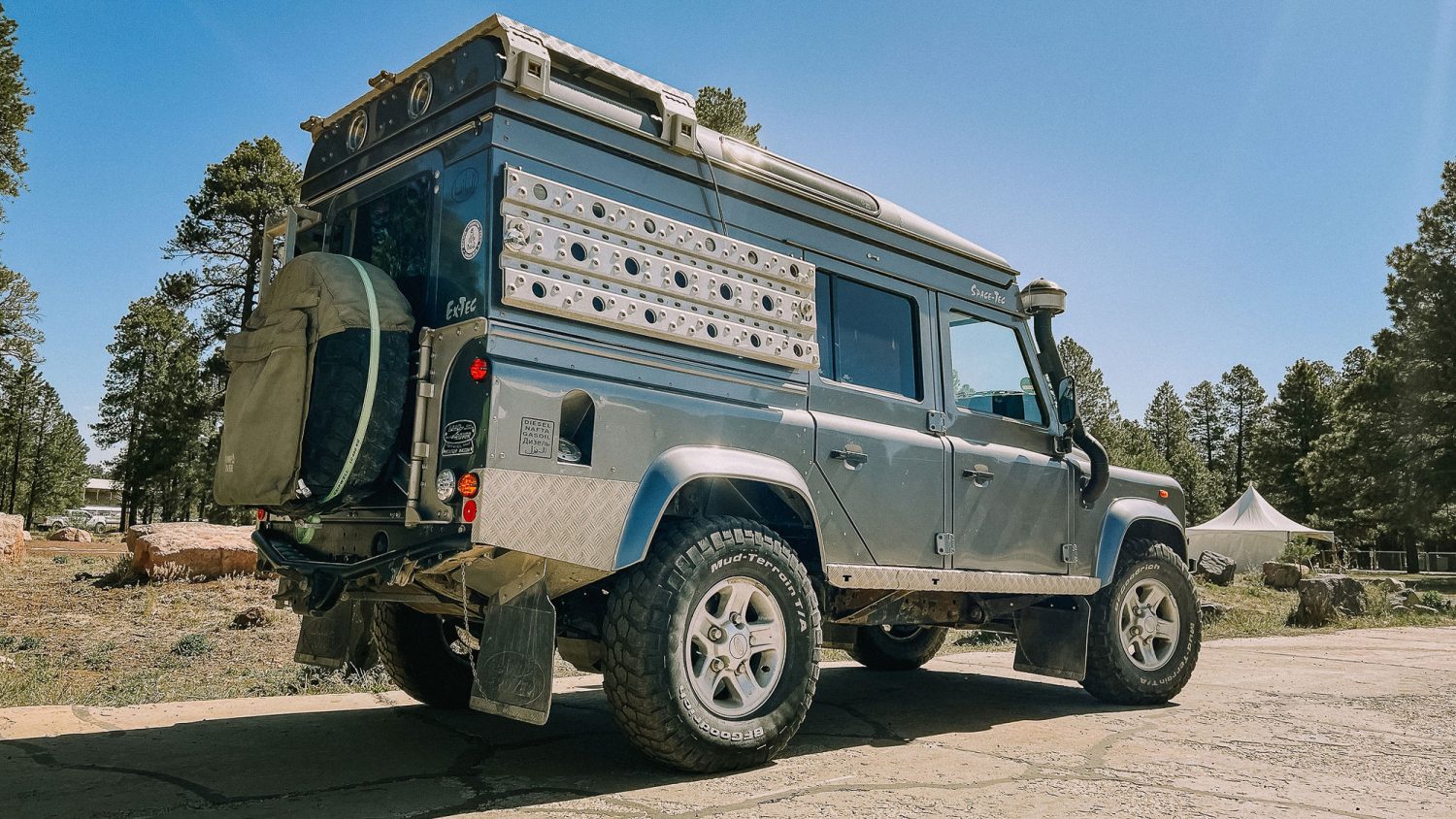 Frank Hoer and Sharon Jan have extensively toured Australia, Europe, Africa, and South, Central, and North America in various Land Rover platforms. Currently, the couple is heading north, eyes set on Alaska, traveling aboard their Land Rover Defender 110 and Space-Tec pop-up with BFGoodrich mud-terrain tires. With its clean lines and minimalist style, this Defender will stand out during its tour to the Arctic. If you spot the couple, ask Sharon about her career as an international green coffee grader. 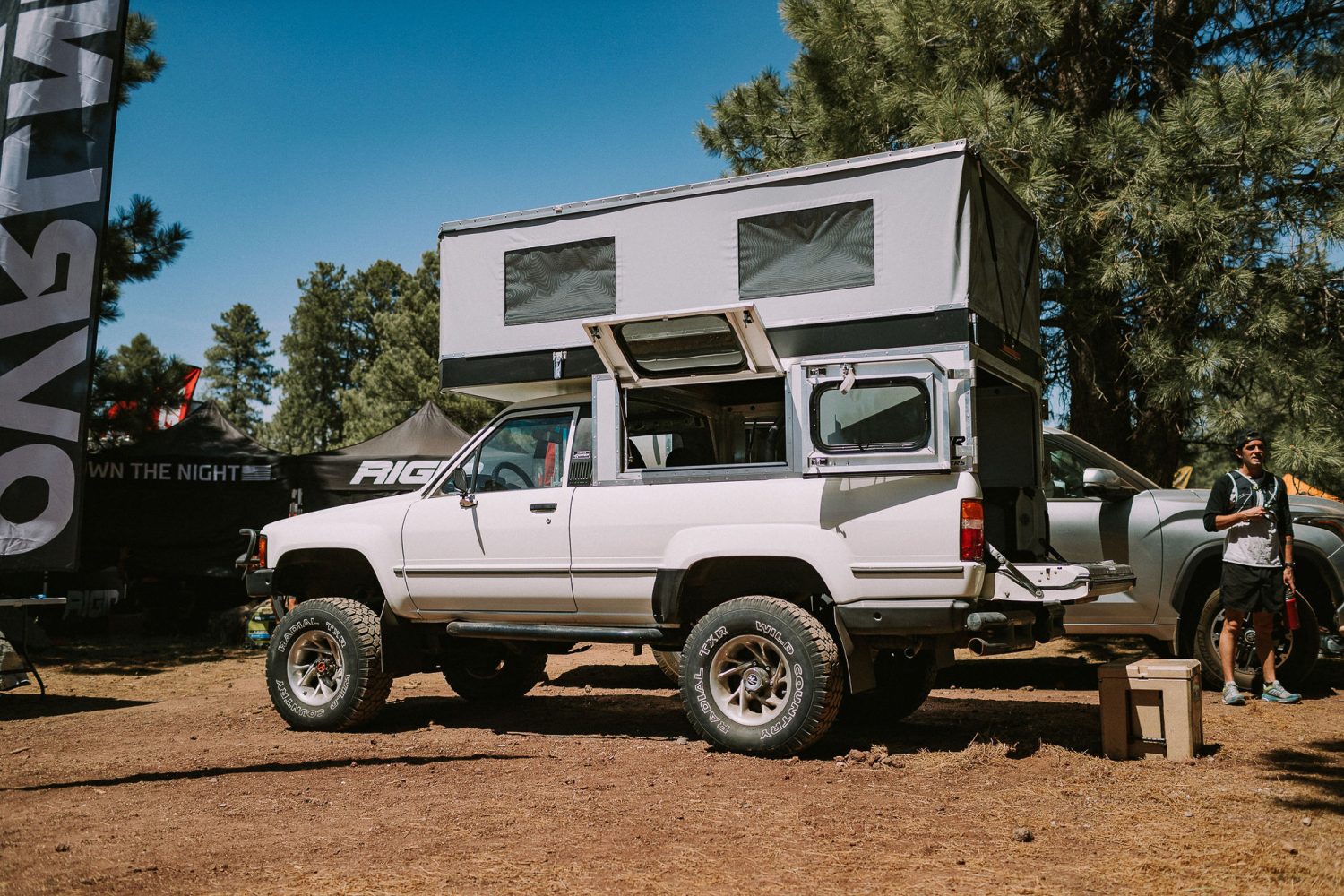 On one of our first dates, my husband picked me up in his (loud) First Gen 4Runner, wooing me with the removable roof at the nearby outdoor movie theater. We spotted this version at Expo more than a decade later, topped with an Ovrlnd Camper that replaces the factory roof. Unlike a Tacoma or Pickup, which don’t have a pass-through option, the interior of this build makes it easy to jump from the living space to the driver’s seat. This is, to my knowledge, the only truck camper option available for a First Gen 4Runner. 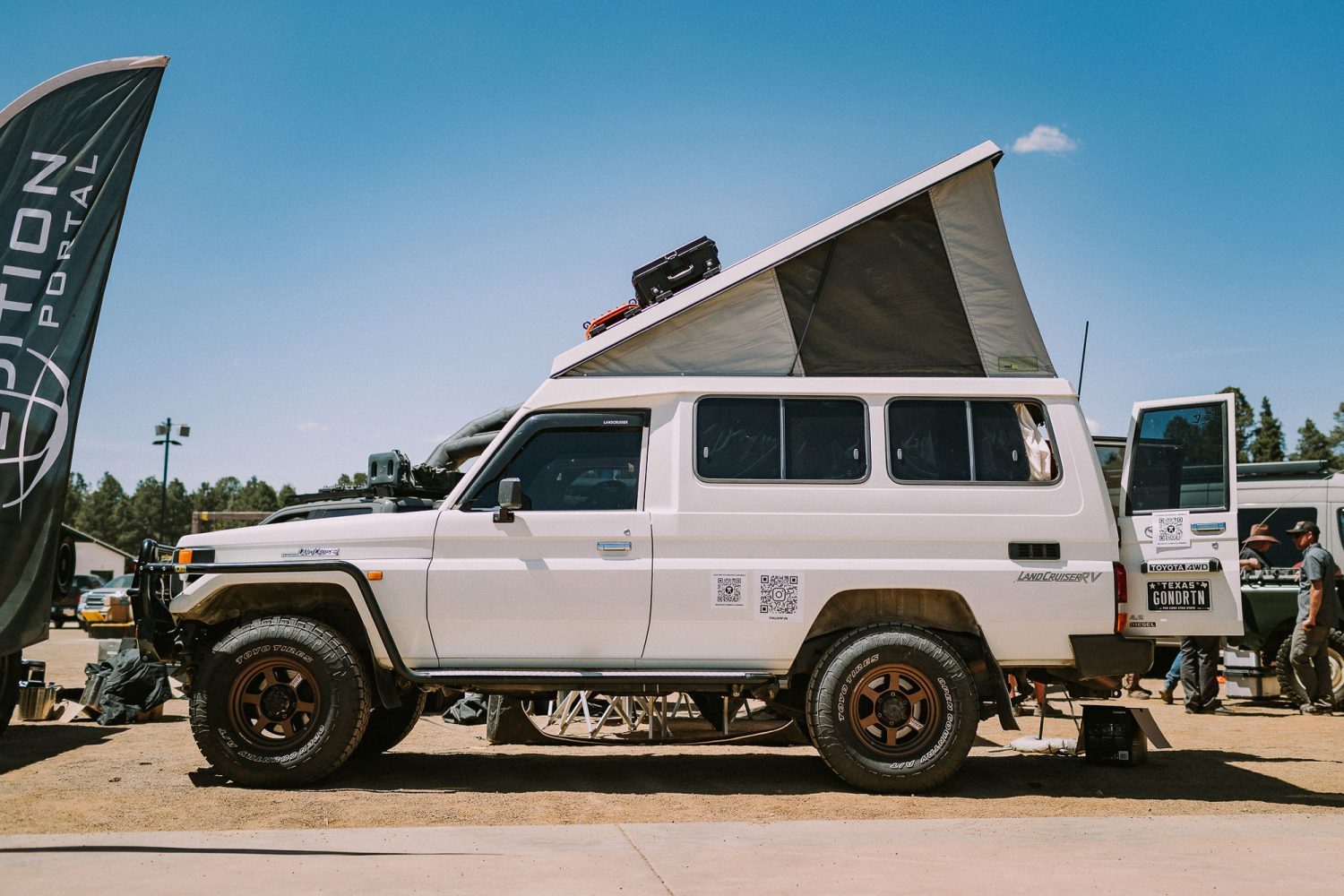 Imported from Australia, Karissa and Linhbergh’s 70-Series Land Cruiser Troopy was posted up at the Dometic booth during this year’s Expo West. A lot of hard work made this build what it is today—a cheery, warm interior with custom cabinets, a Mulgo pop-top, and a cooking space from which delicious meals are made. The couple served Japanese taco rice, Korean BBQ tacos, and more to hungry passersby (myself included). On the electrical side, the Troopy features a Renogy solar power suite, a 2,000-watt inverter, and two 100Ah Battleborn batteries. 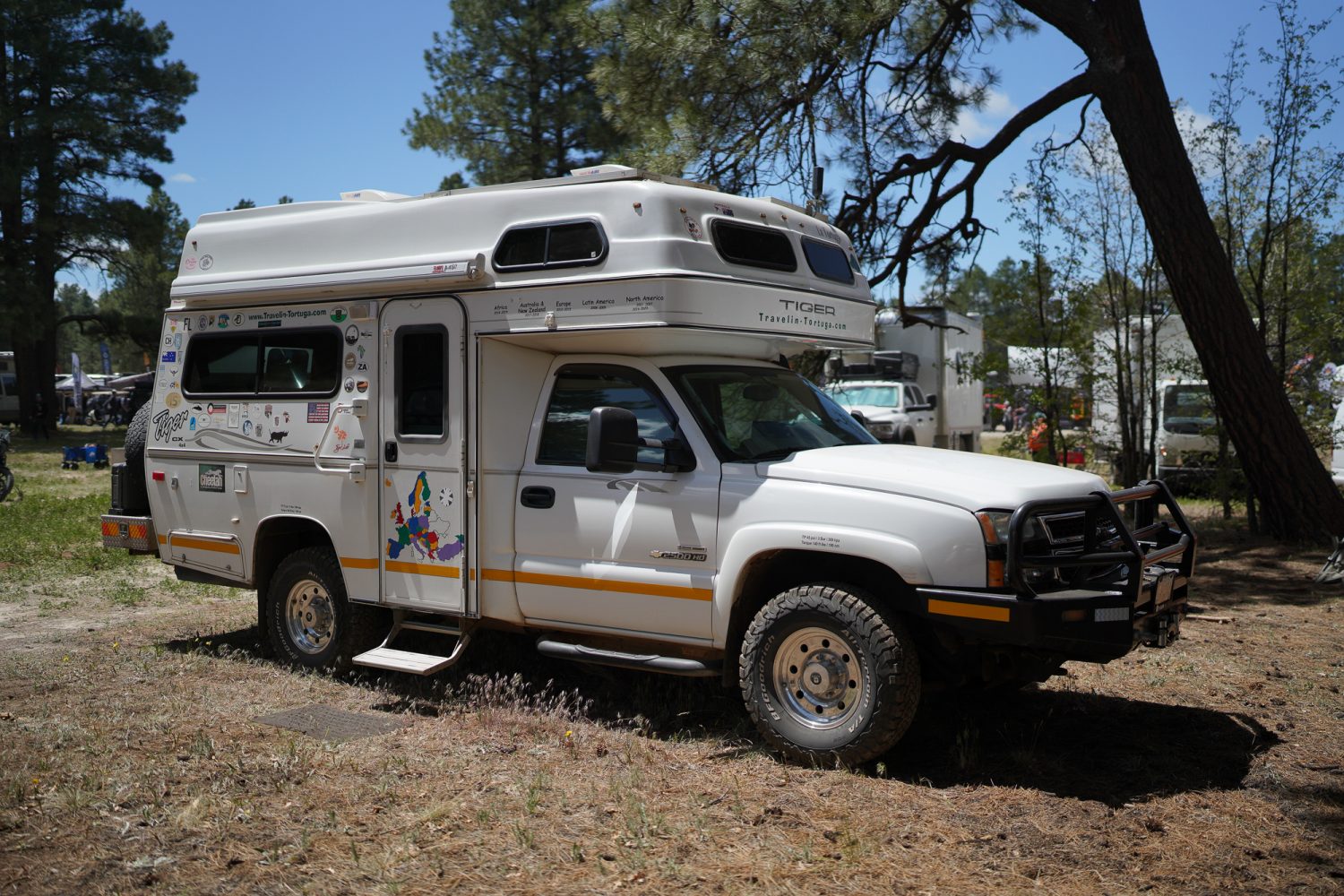 Rick and Kathy Howe drove 435,000 miles through six continents and 65 countries in four motorhomes, documenting their experiences via the Travelin Tortugawebsite. The Tiger features a Chevrolet Duramax Diesel, 6-speed Allison automatic transmission, four-wheel-drive, and a limited-slip differential. Based on a truck chassis rather than the common van chassis, this vehicle has proved to be a reliable, long-lived international platform for the Howes.

Read more about the Howes and their Tiger at travelin-tortuga.com. 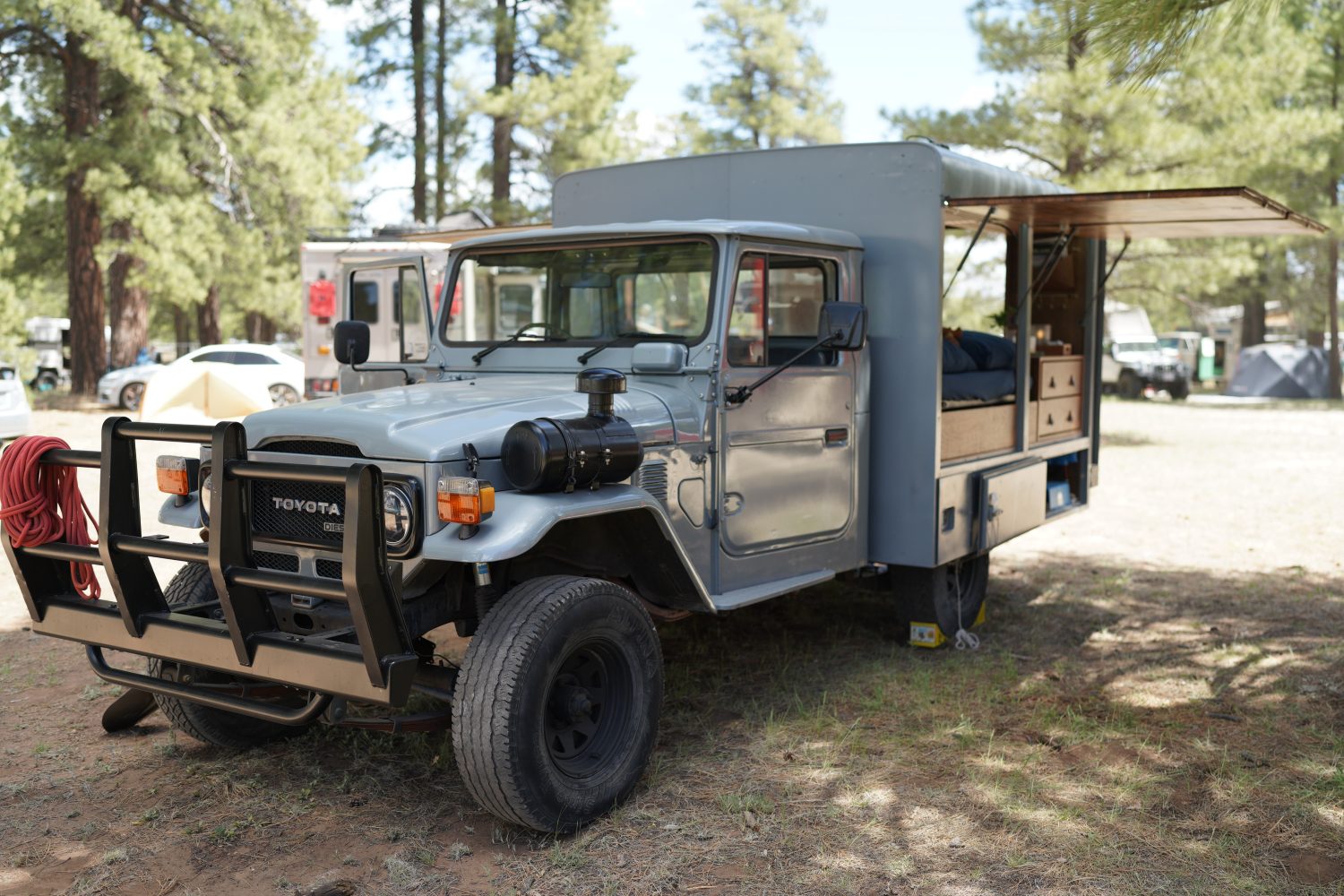 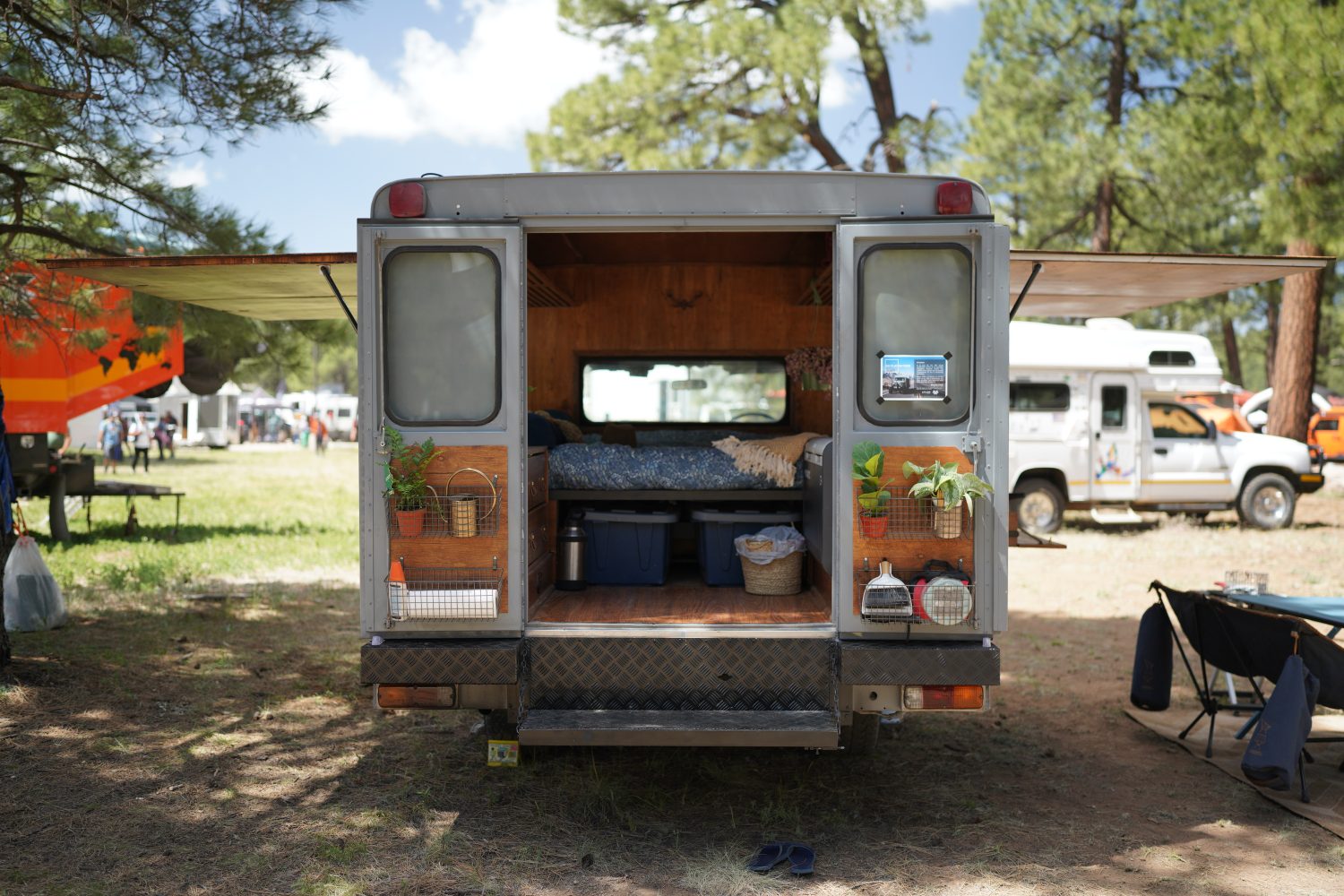 Owners Mike and Lauren morphed this 1981 Toyota Land Cruiser, which originally served as an emergency response vehicle, into a unique and lovely space used to help clean up parks across the US. The couple has done much of the build and repair work themselves, and the truck has allowed them to reach more remote locations to practice their passions of rock climbing and snowboarding.

Find Mike and Lauren at @goplayoutside.