We always seem to find ourselves at the brink of dusk with nowhere to camp. Richard and I were parked at a Whole Foods Market in Castle Rock, Colorado, and while my husband scrolled through the iOverlander app, I crammed the last of a Chipotle burrito into my mouth. We hopped into the 8-speed automatic 2021 Jeep Wrangler 392 (official color: Snazzberry), heading for the hills and hoping the sky wouldn’t be pitch black by the time we reached camp. One of the great things about Colorado we would learn over the coming days was that fantastic camping was never too far away.

After an early-morning flight from Vancouver, British Columbia, to Denver, we threw our three duffel bags, backpacks, and a camera case in the rear of the Jeep. The setup was simplicity at its finest: no fridge, no rooftop tent, no awning, and no drawers. Just us, a ground tent, two sleeping pads, and whatever else we could carry on our backs. To be honest, it felt incredible. This was our first time outside of Canada in close to a year, and the Colorado wilds were calling. 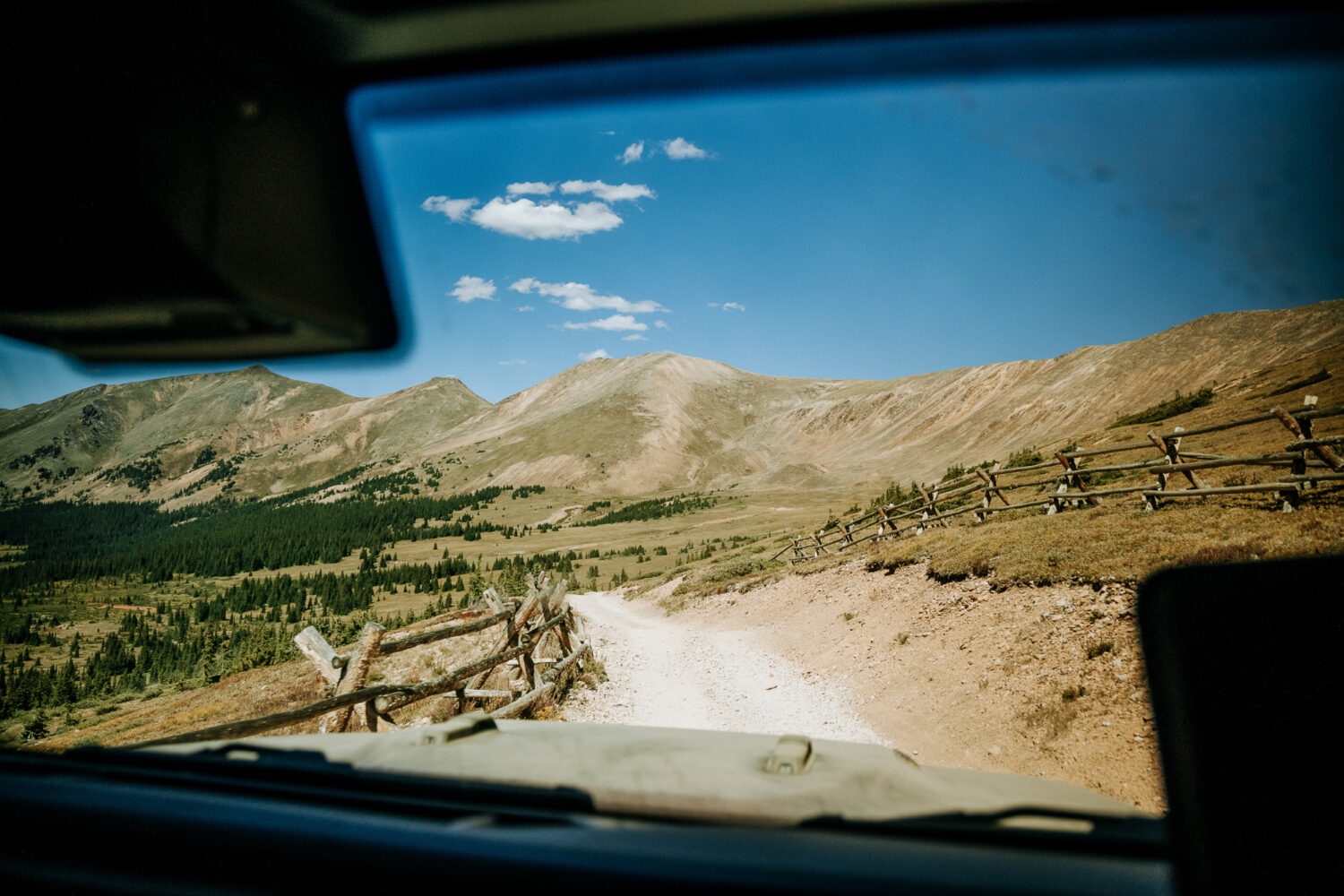 This Jeep would be our companion for the next week, transporting us from Denver to Monument, through dusty and rock-strewn backroads, past sunflowers, yellow mullein, and coyotes roaming through fields. Engaging the lockers and disconnecting the sway bars, we climbed in 4-Lo over Red Cone Peak at 12,801 feet, breathless not only because of the high elevation but because the scenery was unlike anything we’d seen before. In Canada, we can only hike or climb to elevations like that. 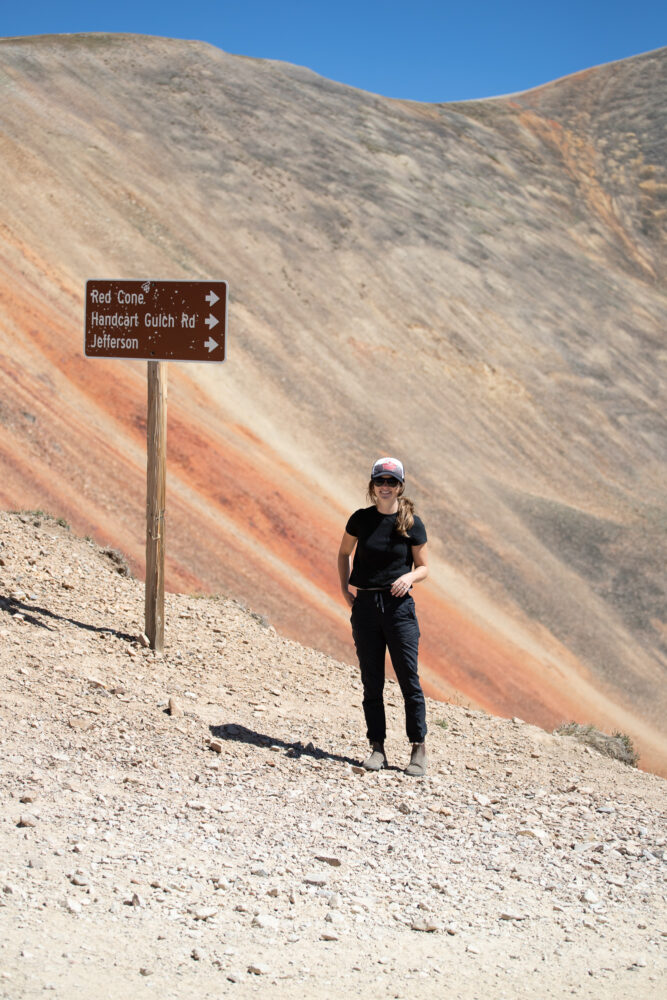 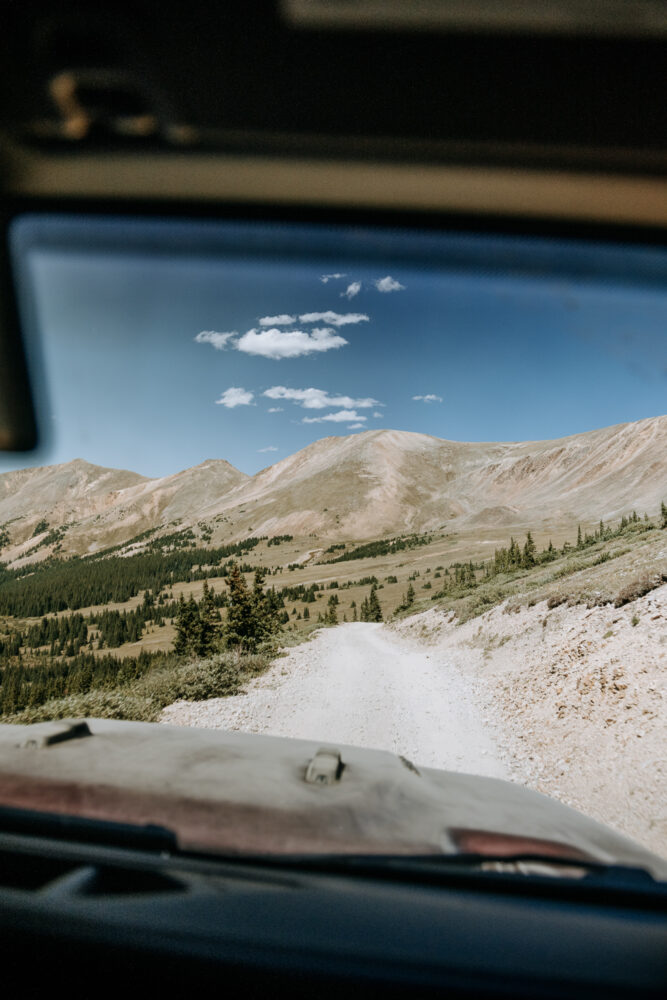 The Jeep’s self-dimming high beams were a welcome surprise as we wound our way through the darkness of the Rampart Range in Pike National Forest. That kind of technology doesn’t exist in our 1990 Toyota Pickup, and I appreciated that I could keep my hands on the paddle shifters during the twisty ascent to camp. Blind-spot monitoring also proved helpful in the fast-paced Denver traffic, which seems ridiculous even to mention, but when you drive an antiquated vehicle, upgrades such as this and backup cameras blow your mind a little bit.

I’ll admit that the Jeep Wrangler 392’s appearance is, well, unassuming at best. It looks like every other JL, but it doesn’t feel that way when you’re driving it. I snuck a glimpse at it several times throughout the week in Colorado with various backdrops (does anyone else do that?) and was always surprised by how the look of the truck differs so massively from how it feels, how it drives, and, most of all, how it sounds (more about that later). I loved the thoughtful details, such as the Willys graphic on the gear shifter and in the right corner of the windshield. 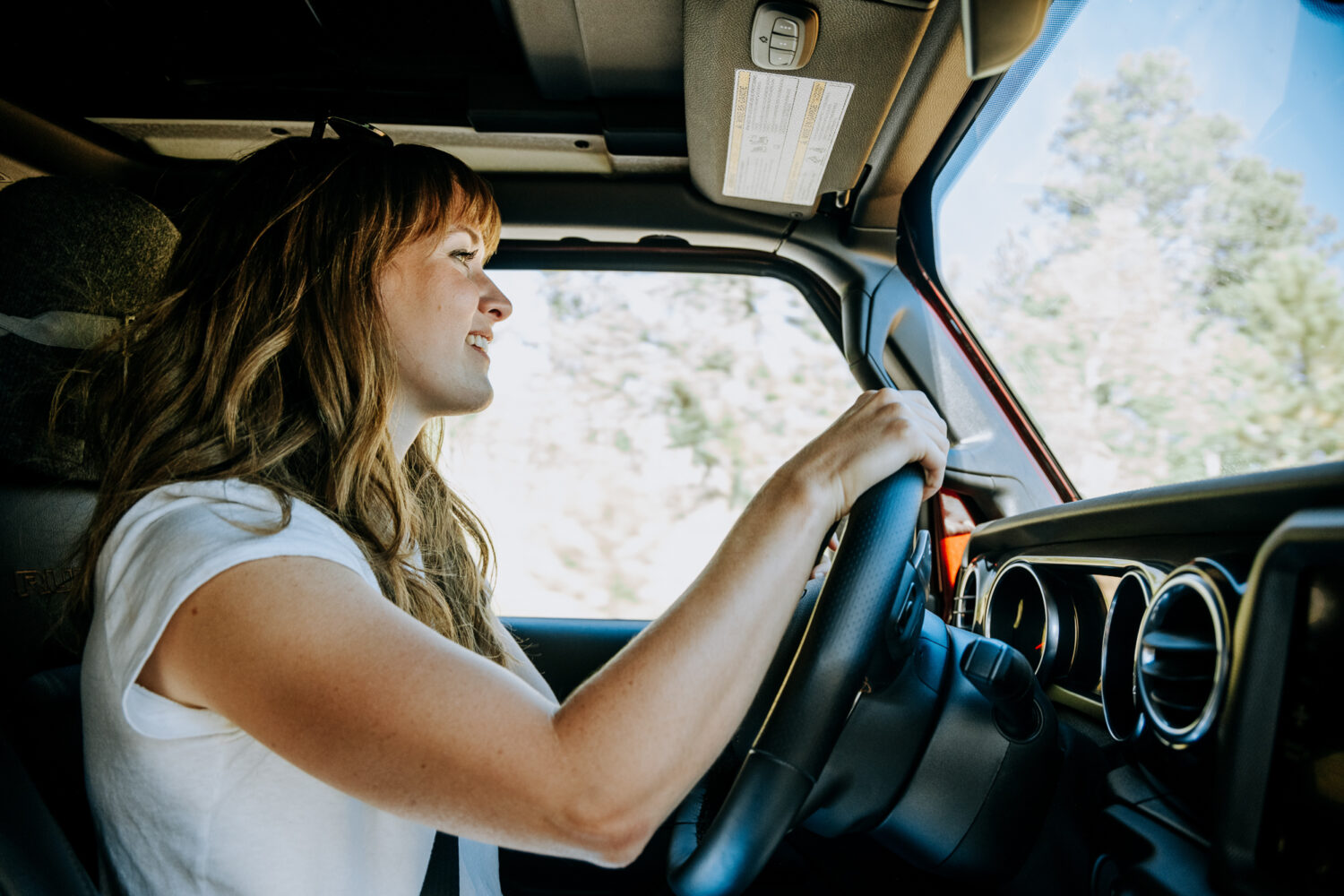 A dirt track led to our spot for the night, where we parked amongst towering pine trees. The 392’s rear seats folded down nicely, creating space for the sleeping pads and bags which made our bed. The rear seats do not fold flush, but we forgot our pillows, so a little bit of extra vertical wasn’t a huge deal. Space becomes limited when the rear seat and trunk are filled with two bodies, so we jammed and stacked the rest of our luggage on the front seats. Our 5-foot-8-inch and 5-foot-3-inch heights meant there was just enough space to wiggle our toes. A person of average size would find a ground tent much more comfortable.

The following days were spent with a group organized by OnX Offroad and Dometic, running trails of varying difficulty and camping in Colorado’s chilly high alpine forest. I prefer dirt road driving over the chaos of the highway and was eager to see what the 6.4L Hemi V8 could do off-pavement. With 470 horsepower and 470 pound-feet of torque, I was expecting the Wrangler 392 to be rowdy. But it didn’t feel at all overpowered while flying over corrugations or crawling over rocks and obstacles. The vehicle’s breakover angle was pretty good. If I chose the correct line, disconnected the sway bars, engaged the lockers, and switched into 4-Lo, the ease with which I tackled challenging terrain was laughable. I’ve driven Jeeps before, including a 2020 Gladiator, so it was no surprise that the vehicle shined off-road. 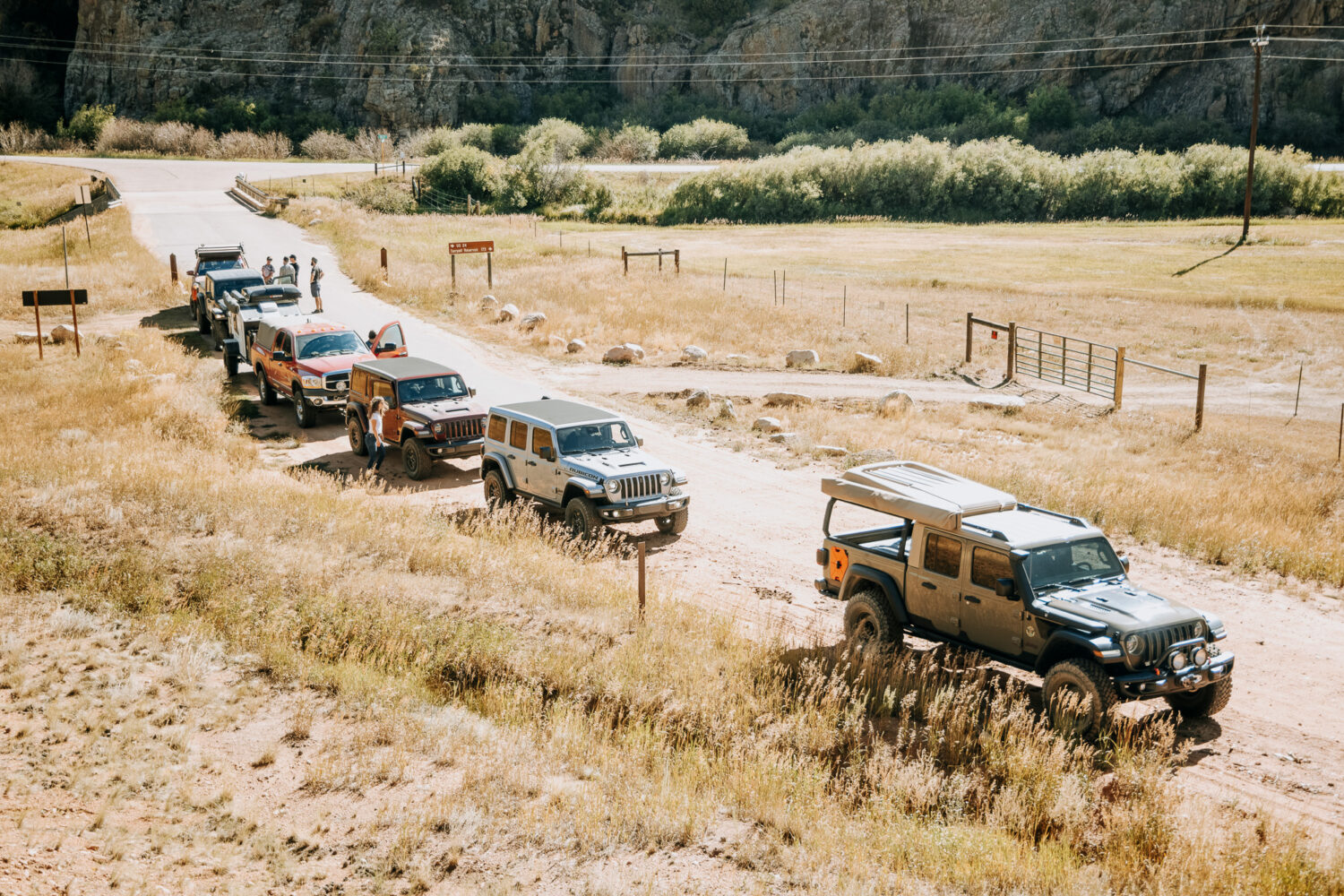 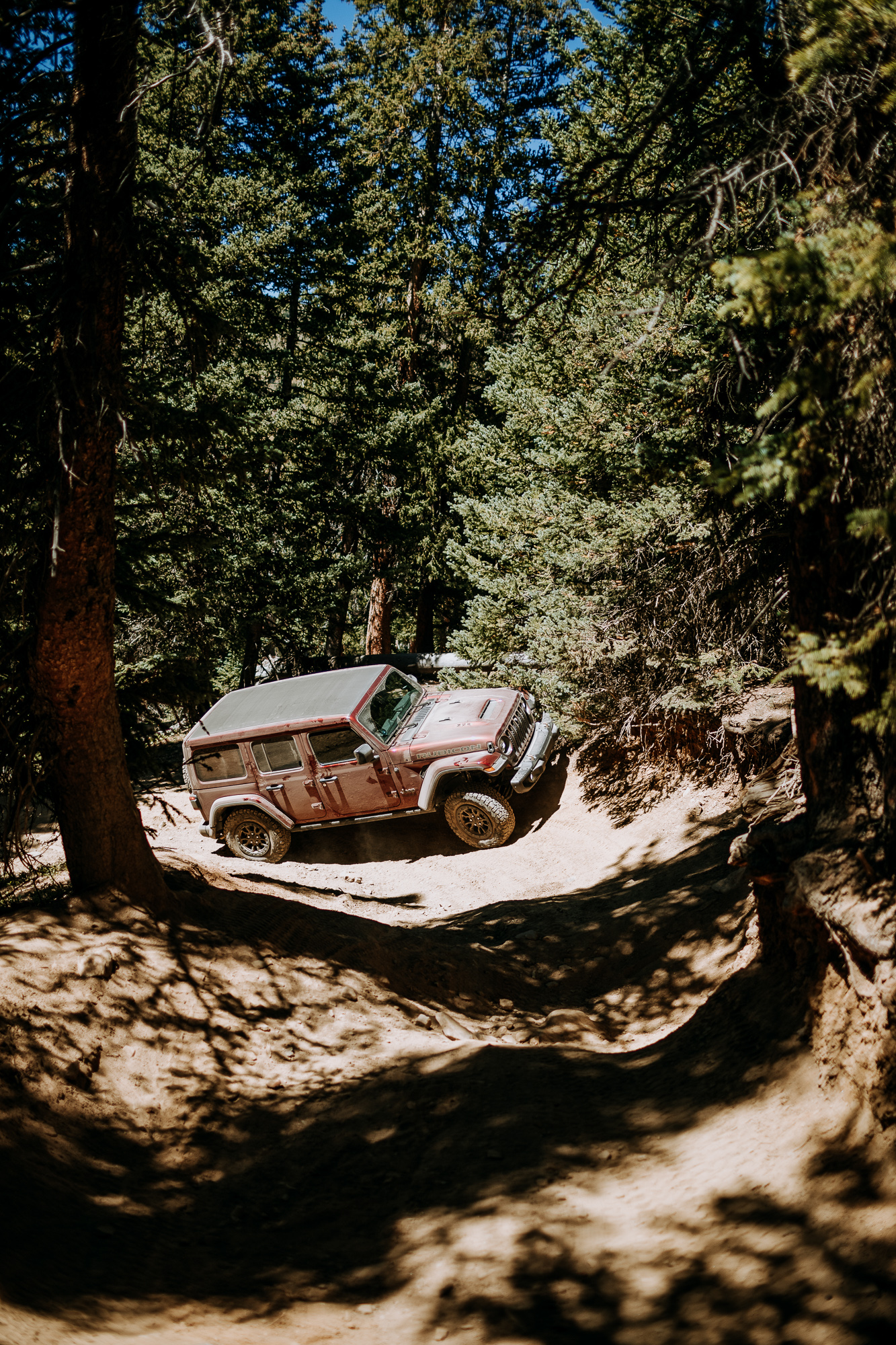 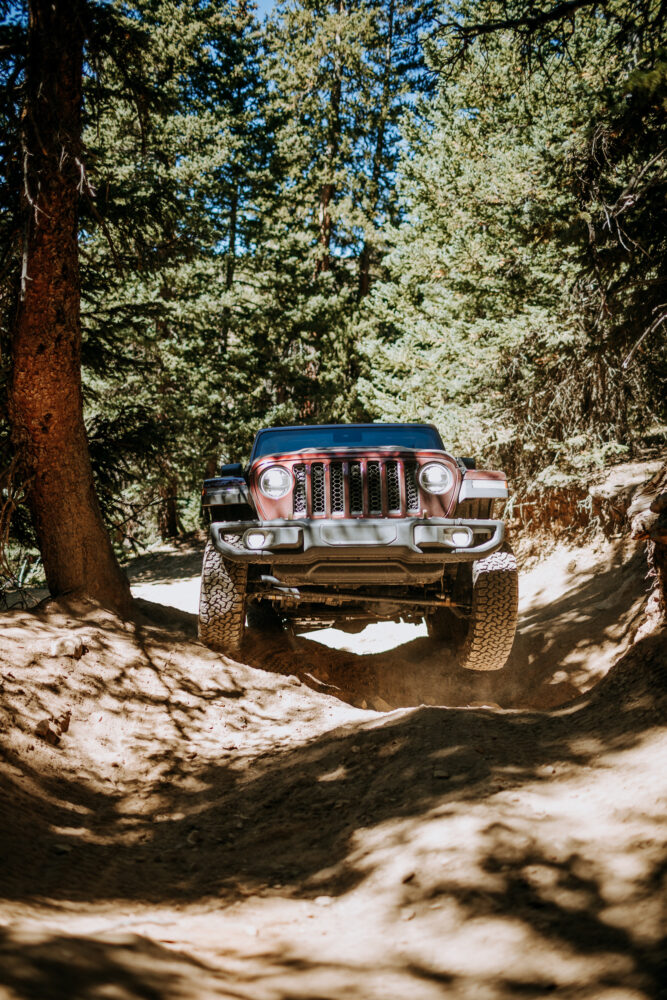 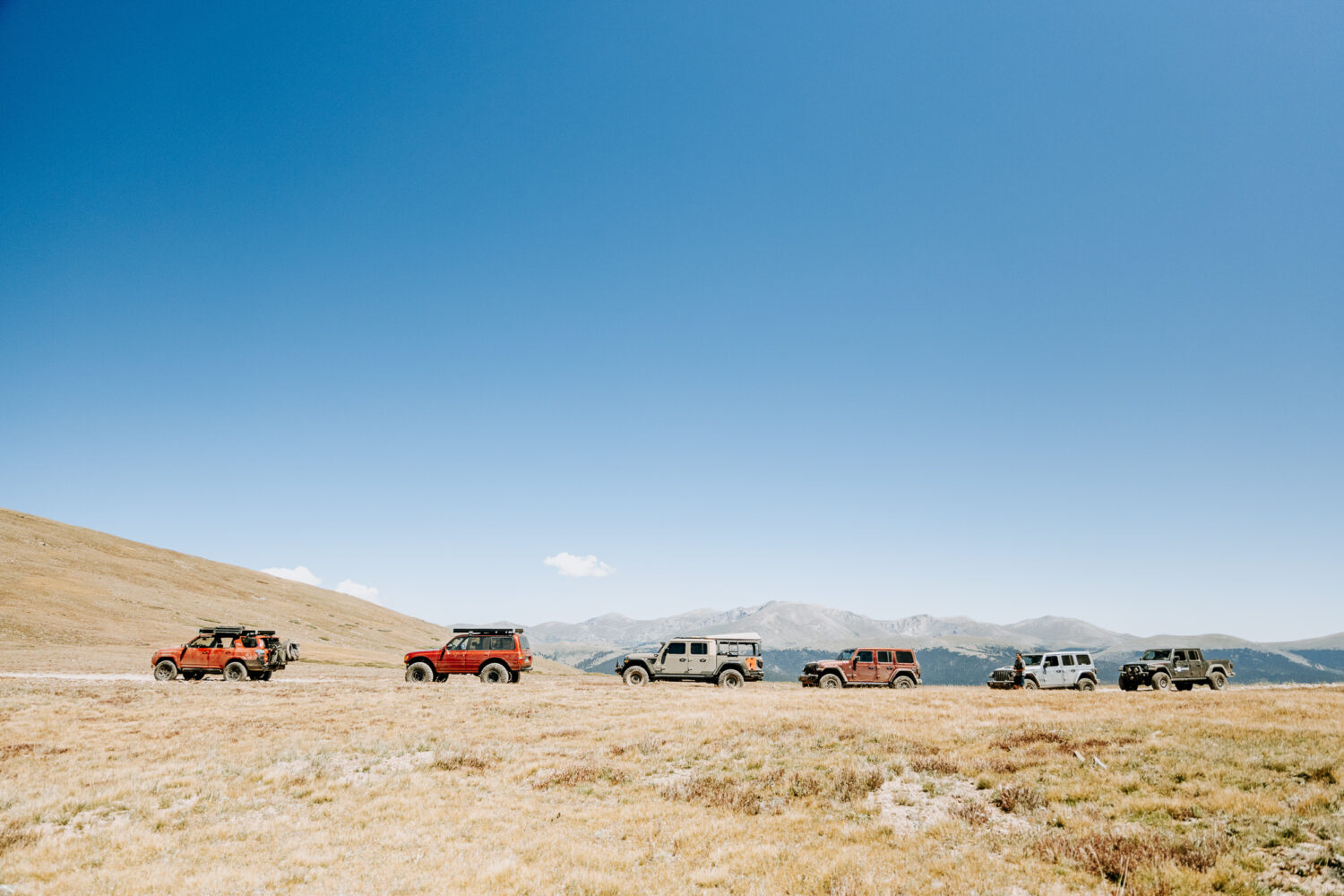 Jeep clearly knows their target demographic, as the stock Wrangler 392 is equipped with Fox shocks, 17-inch beadlock-capable wheels, and 285/70R17 BFGoodrich KO2 all-terrain tires. I hit the bump stops during a few big events, so this suspension system leaves something to be desired, but I can’t complain too much as the truck is stock. The Off-Road Pages screen in the Jeep’s 8.4-inch Uconnect system provided helpful pitch and roll information, and I found the cameras helpful for spotting obstacles. Narrow A-pillars provided good visibility, particularly compared with our 2008 Toyota Tundra back home. The adjustable leather-trimmed bucket seats fit my short frame comfortably. However, I’m still reprogramming my muscle memory when it comes to opening the windows, forcing my hand to avoid the door panel and head to the central control panel instead.

Dometic kindly lent us a CFX45 cooler, powered by a Dometic 40Ah portable lithium battery (PLB40) that we plugged into a 12-volt socket in the rear of the Jeep. While we enjoyed our simple setup initially, one piece of kit that we can never say no to is the fridge, and it proved to be essential during hot days atop high-elevation passes in Colorado. We’ve found that keeping hydrated is one of the best ways to prevent altitude sickness and headaches, so we stocked the fridge with cold drinks for the week. While we enjoyed sleeping in the back of the Jeep, the addition of the fridge meant we were relegated to our ground tent, which wasn’t bad either! The extra space meant we could easily access toiletries, clothes, and camera gear from the rear hatch of the truck.

Eventually, our time on dirt came to an end. With a satisfying layer of dust hiding paint, our group transited toward Overland Expo Mountain West via the ski-hill dotted Loveland Pass. The Jeep’s soft top was surprisingly quiet, muffling much of the road noise that distracted me while driving a 2020 Gladiator in the past. Less road noise meant I could thoroughly enjoy the dual-mode exhaust feature. Is it frivolous to say that this was one of my favorite features of the Wrangler 392? Sometimes I couldn’t distinguish between the sub-blasting “Oxytocin” by Billie Eilish and the performance exhaust rumbling away. Another bonus: the performance exhaust feature can be turned off so you can respect your fellow campers by rolling through a site in stealth mode.

The 392’s fuel economy and price may present drawbacks for some. The US Environmental Protection Agency has awarded the 2021 Jeep Wrangler 392’s fuel economy, greenhouse gas rating, and smog rating (tailpipe only) with one out of 10 stars, where 10 is the best. In addition, the vehicle’s base price sits at $73,500, which is a significant investment from my point of view. But for those considering an aftermarket V8, that route can also be quite pricey and doesn’t come with a full factory warranty. As always, it comes down to your budget and the vehicle’s intended purpose.

While this Jeep Wrangler 392 excels off-pavement, its faults reveal themselves at higher highway speeds. The solid front axle contributes to its wandering ways, and there’s no stopping straight or feeling in control while slowing to take an exit. However, I did feel the 392 required less wrangling (pun intended) compared to the 2020 Gladiator. And the power of the V8 Hemi really revealed itself once I had driven another vehicle. Why does accelerating take so much time now? Have I been ruined for life with the need for more power, baby?

Editor’s Note: Jeep and OnX Offroad have partnered to create an interesting perk for active Jeep loyalty program members. These folks receive a free six-month subscription to the OnX Offroad Elite app, whose newest features include a Wildfire layer and the ability to view the Satellite layer in 3D via a mobile device.