Clouds cast a veil of mystery as our team entered Iceland’s primordial highlands. Research revealed that Celtic monks had settlements dating back more than a century before Norsemen reached the island in 874. Scot and Irish settlers began to arrive in the ’900s, and by the 10th century, most arable land had been claimed. The Land Cruiser shifted to the left, its weight crushing the snow bridge we were balanced on and dropping its tire into the crevasse. For a moment, everyone in the Troopie was still, emotionally bracing for a pending collapse. The three remaining tires started to crack and pop as they shifted against the broken surface, a mixture of glacial ice, snow, and volcanic debris. The last subglacial eruption had occurred barely a year before, its discharge coating the surface with a carpet of black ash and rock. This added to the uncertainty, as foreign material causes uneven melting and turns the surface into a gauntlet of ice. I locked both differentials and modulated the clutch with the lightest possible throttle application, relying on the torque of the diesel and 44-inch diameter of the tires to extract us from the chasm below. The suspension settled under the driveline torque and the tires slowly began to compress against the icy lip, deforming the carcass around what little grip remained. The traction was sufficient, and the 4-ton Land Cruiser extracted itself from the glacier’s grip. Relieved, I backed up a few feet to reassess our plan: how were we going to get these trucks up on the glacial plateau?

The approach to the glacier was a web of crevasses and glacial rivers, and was one of the more technically challenging sections of the trip. Conditions were exacerbated by heavy melting that occurred during the 2011 volcanic eruption. 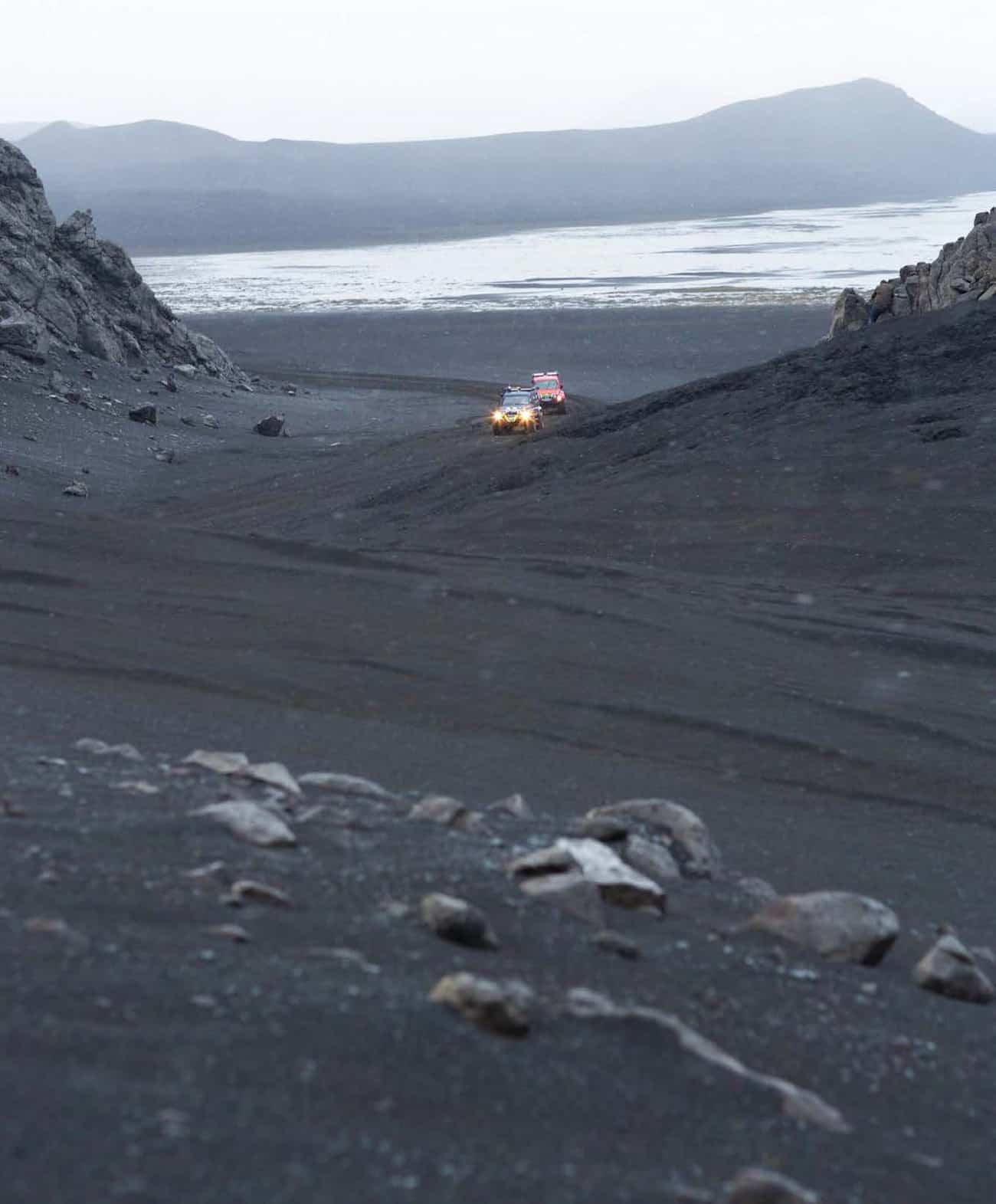 Our two Land Cruisers challenged the notion that an overland vehicle should operate with the smallest tires possible for the conditions. Though they lacked high-speed stability and fuel economy suffered, these vehicles made short work of every obstacle presented, including deep snow and mud, fields of volcanic rocks and ash, and coastal dunes. 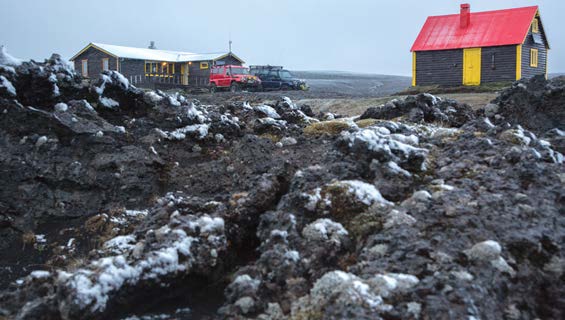 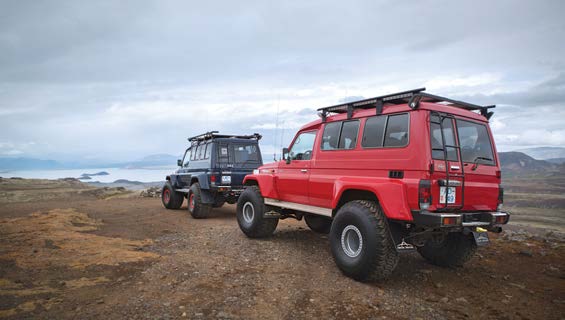 The interior of Iceland is a raw yet stunning wasteland. Flowing valleys of black dunes are comprised of massive deposits of volcanic rock and ash. Young on a geologic scale, the island is slowly being torn apart by the divergent movement of the Eurasian and North American plates.

Our relationship with Arctic Trucks provided access to remote research stations and huts. Stocked with wood or propane for heat, they were immaculately maintained and a welcome respite from the snow and cold. Our first night was spent in the Jökulheimar Hut (Glacial World), suitably situated at the edge of the glacier. 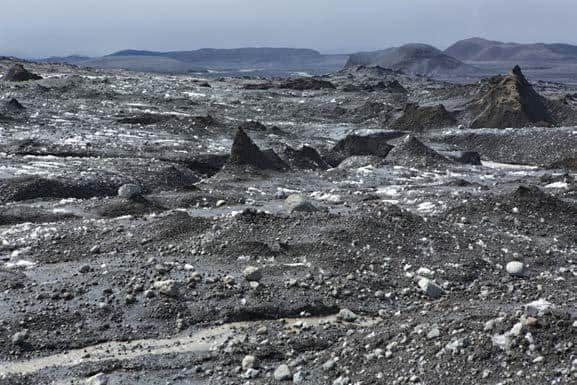 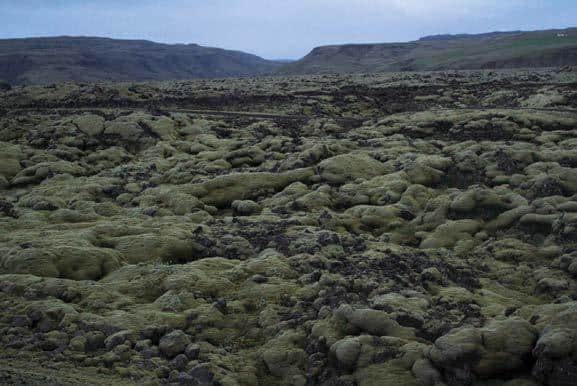 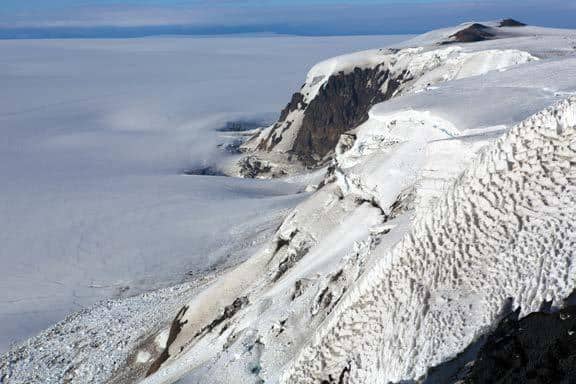 Monochrome tones of black lava and oft-clouded skies rendered some of the most beautiful landscapes I’ve experienced. The textures are infinite—lava and snow, bent and twisted by eons of wind and water, leave otherworldly impressions and the feeling of a planet being born. The HZJ78 Land Cruisers, each fitted with 44-inch Dick Cepek tires, were exceptionally capable. The footprint of just one tire nearly equaled the combined contact area of four tires on our Expeditions 7 trucks. Despite this, and the fact that we were running 3 psi with both differentials locked, progress was not always easy, particularly on the slick and technical approach to the glacier. 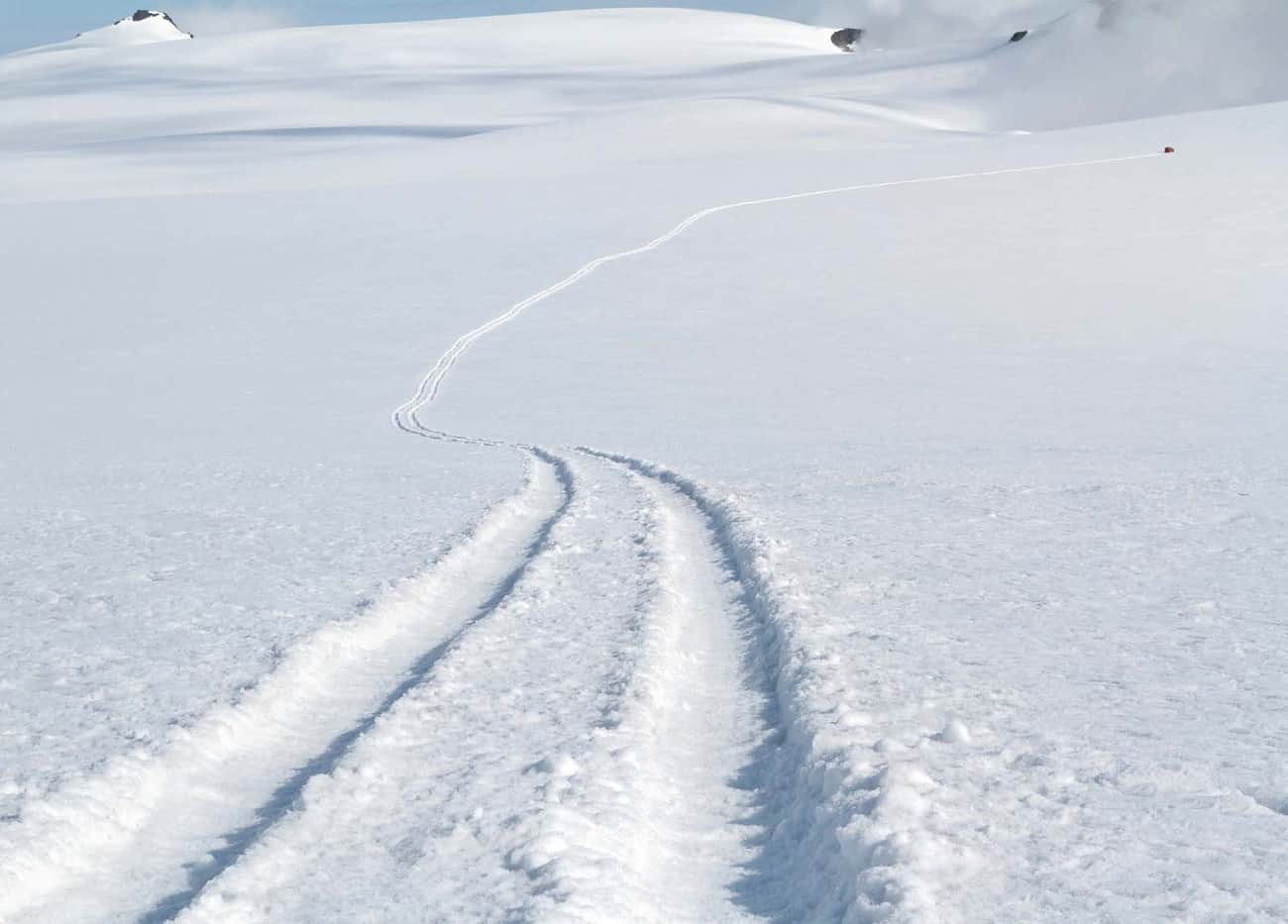 Once on top of the glacier, this snowfield stretched to the horizon and required days to cross. It was quite eerie to think that underneath the 1,000 feet of ice we were driving on was an active volcano slowly making its way to the surface. 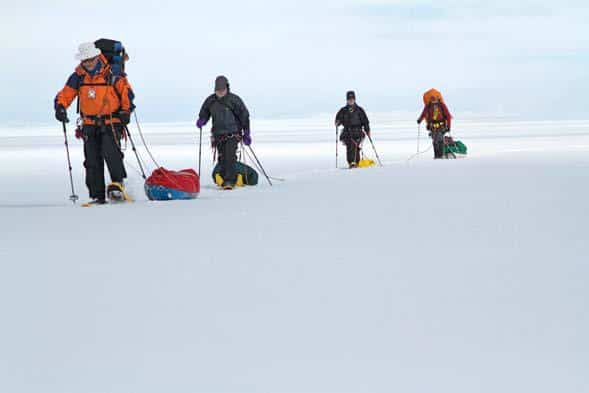 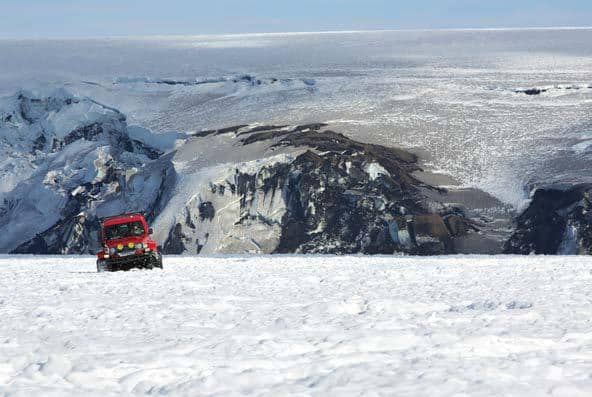 Traversing the Icelandic highlands was like passing through a featureless and frozen lunar world.

The only other group we encountered was a team from Germany attempting to ski the crossing. Though they were in good spirits when we met them, we were informed later that their attempt had been aborted. According to our Icelandic friends, nearly 80 percent of attempted crossings fail, most often because of weather. 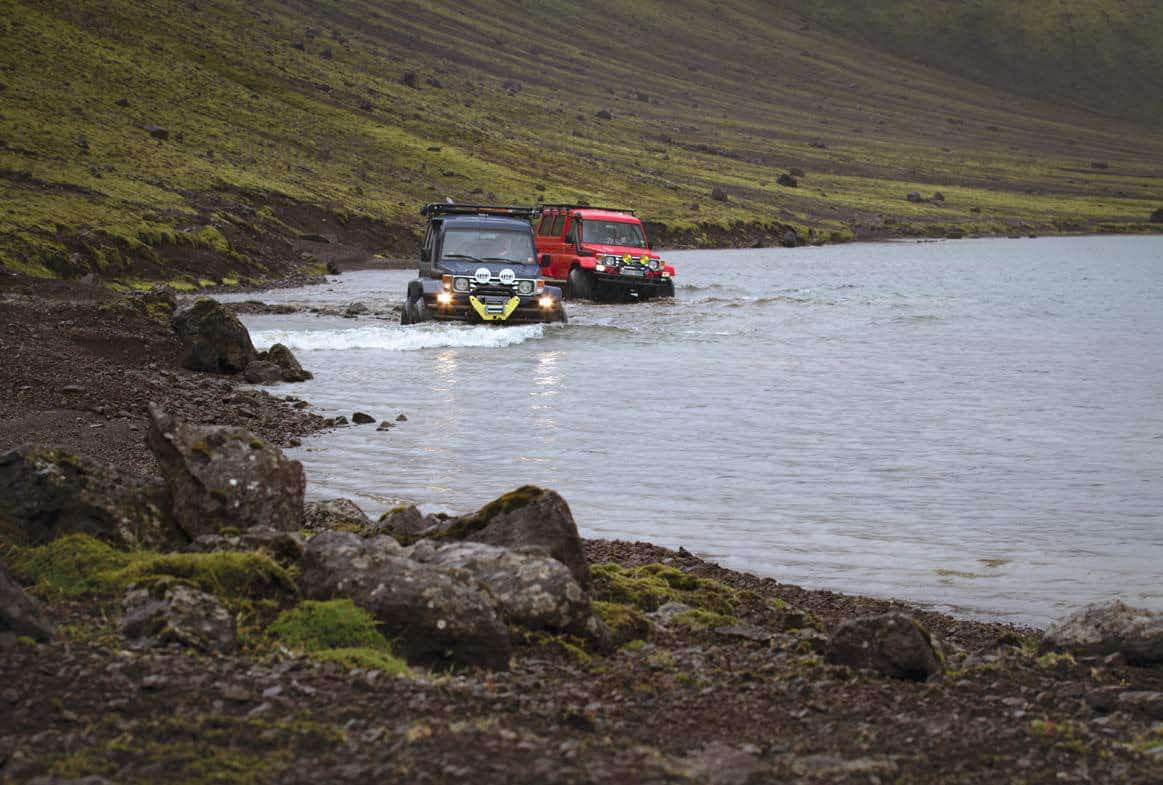 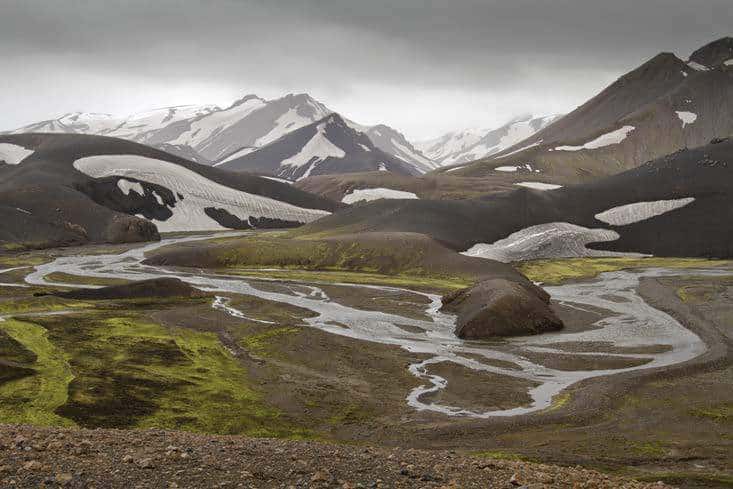 At one point, the route paralleled the shores of Blautulón Lake (wet lagoons). Recalling that a vehicle had been lost to the lake during the previous year— the driver wandered too close to the deep—made for careful driving and a few tense moments. Without question, Iceland has some of the most intense and rewarding driving in the world. Venturing off the beaten path requires experienced drivers and well-prepared vehicles.

Jokuldalir (glacial) Valley is one of the few places where the region’s monochromatic expanses of ash and snow are veiled in brilliant greens and reds. Naturally warmed by subdued volcanic activity below the surface, flora, which would otherwise not be found, flourishes; it was spectacular.

Team member Josh Miller looks out over the expansive crater of Ljotipollur (Uglypond). Created during an enormous eruption in 1477, it sits at the southernmost end of a long-active fissure. 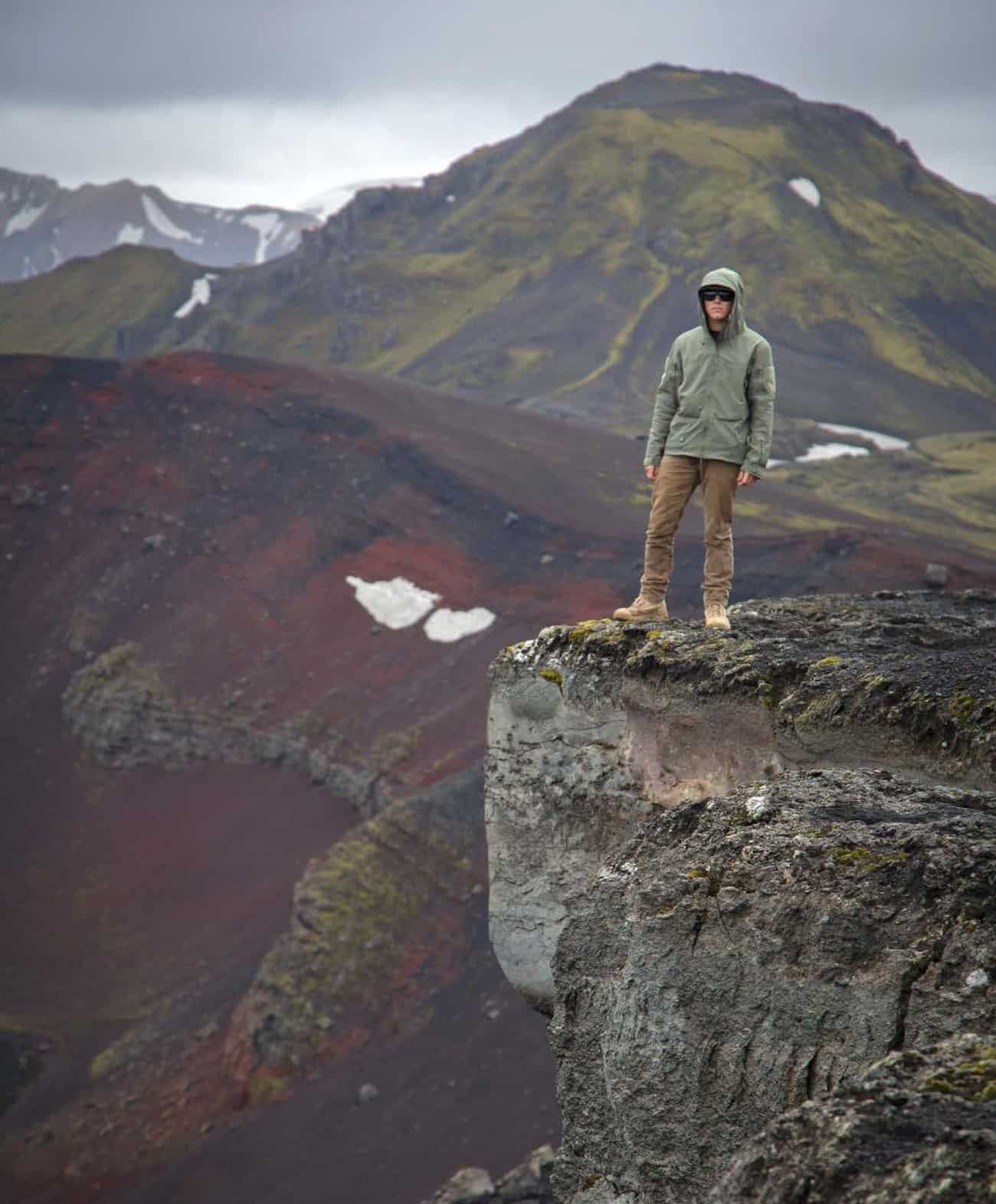 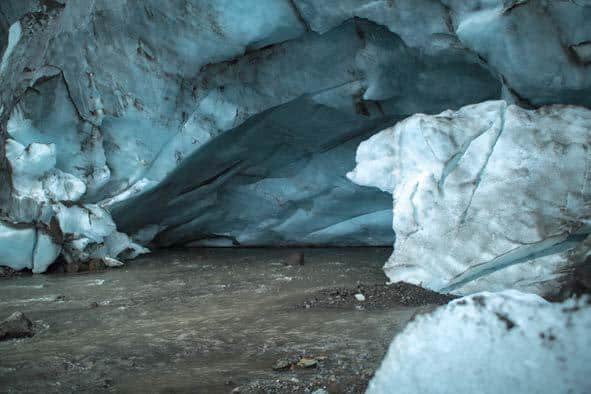 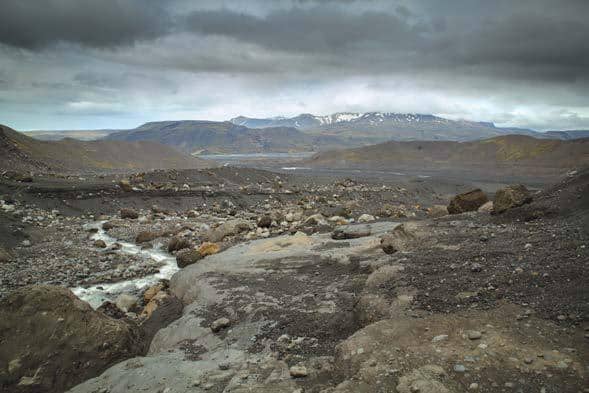 Eyjafjallajökull volcano erupted in March of 2010 (Overland Journal, Summer 2011) on a grand scale. Over a period of 3 days, over 3,000 earthquakes were recorded at the volcano, and the subsequent eruptions sent an ash plume several kilometers into the atmosphere, clouding the skies and suspending air travel throughout Europe. The resulting mixture of lava and glacial ice caused a violent jökulhlaup (flood) that wiped out bridges, redirected rivers, and displaced 800 local residents.

Over the millennia, the wind, sun, and rain work away at the exposed surfaces, transforming the once-solid mass into a maze of caves and crevasses. Though it may be tempting to explore this sub-glacial world, shifts in the flow can result in the unforeseen collapse of tons of ice.

Glaciers are nature’s earthmovers. In the process of “flowing” off a mountain, glaciers collect millions of tons of rock and debris. Then, as it slowly dies at the end of its journey, it deposits its content in a resulting moraine. Our adventure concluded with a stunning drive up Thórsmörk valley and exploration of the island’s coastline. With black sands and numerous wrecks, Iceland’s southern beaches are spectacular. With the trip nearly over we threw caution to the wind, carving a few turns in the ash-black dunes. Iceland and its people are truly wonderful; it has become one my favorite places. 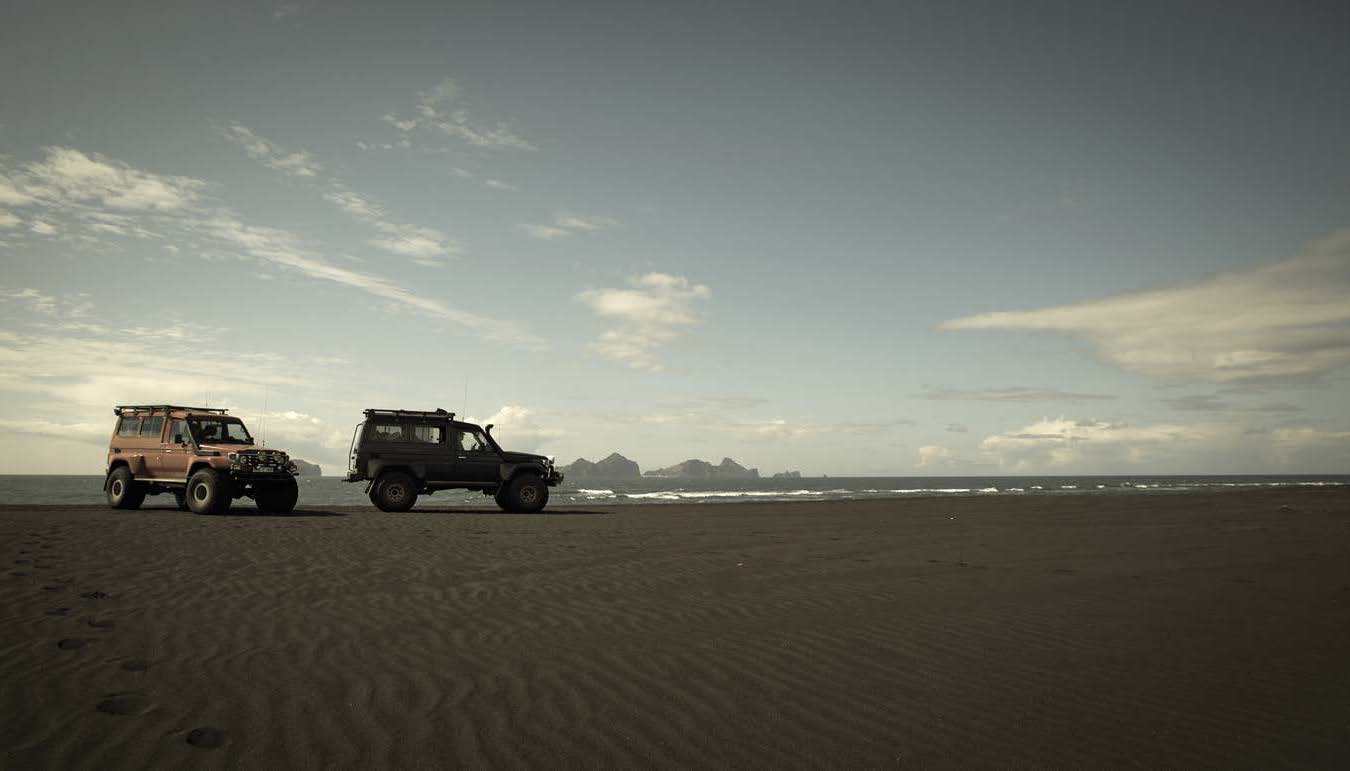 The Expeditions 7 team was in Iceland, conducting training for our upcoming Antarctica leg and attempting to cross Vatnajökull the largest glacier in Europe. Covering over 3,000 square miles (8 percent of the country’s landmass), it averages over 1,300 feet thick. Arriving at the base of Vatnajökull had required a full day of driving, mostly through a charcoal-black desert wasteland of volcanic ash, sand, and rock. It was spring, and the rivers, which receive outflow from 30 separate glacial outlets, were swelling with the passing of each day. Easily capable of overturning our vehicles, we were careful in choosing the proper fording location.

Balanced on the Mid-Atlantic Ridge, Iceland is literally being torn apart by the divergent movements of the North American and Eurasian continental plates. Referred to as the land of fire and ice (it should be thoroughly frozen most of the year like neighboring Greenland), its mere existence is owed to the volcanoes that dominate its horizons. As the two tectonic plates have shifted east and west, magma from beneath the earth’s crust has pushed its way to the surface. Constantly in flux and bound by the dynamic forces of nature, it remains one of the great adventure destinations in the world.

Crossing Vatnajökull is a rare feat, even for the Icelandic, so we contacted Emil Grímsson of Arctic Trucks to help coordinate vehicles and logistics. The goal was to expose the team to conditions we may experience in Antarctica, including comprehensive crevasse rescue and recovery training, as well as advanced glacier driving. The Antarctic team will consist of Greg, Josh, Oakley, and myself, with Greg and me as the primary drivers. Greg is excellent behind the wheel, but had no experience in this type of terrain. I had some glacier driving experience, but we were in agreement that the entire team needed more ice time—a lot more.

While training in a classroom can be productive, there is nothing like the real thing to accelerate the learning curve. We met in Reykjavik, the world’s northernmost capital city, and took delivery of two HZJ78-series Land Cruisers—the closest approximation to how the E7 truck will be prepared for the southernmost continent. Aaron Reynisson and Josef Holmjarn (Jobbi), two of Arctic Truck’s best field experts, would be our guides, trainers, and mentors for a week-long, multi-terrain exploration of Iceland. The first night was spent in a research station near the base of the glacier, affording a spectacular view of our goal for the next day. Even in late spring, the sun barely set, providing nearly 24-hour light for driving, hiking, and photography. Our team was fortunate to have filmmaker and photographer Sinuhe Xavier along to capture the journey in both video and stills. Images always tell the most compelling story, so follow along as the Expeditions 7 team of Greg, Josh, Oakley, and I explore the frozen glaciers and volcanic deserts of one of the most fascinating countries in the world. 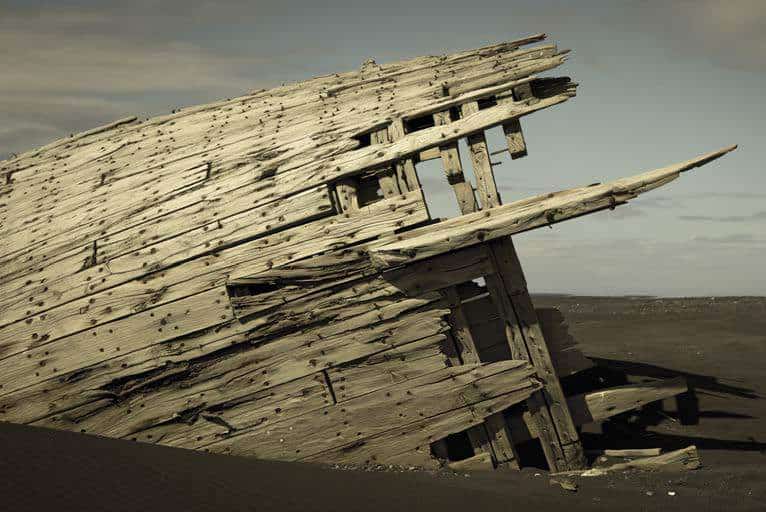 Adventure Motorcycling Handbook: A Route & Planning Gu...
by Chris Scott
From $7From CAD$25.84

Sailing Alone Around The World: A Personal Account Of ...
by Joshua Slocum
From $26From CAD$47.12 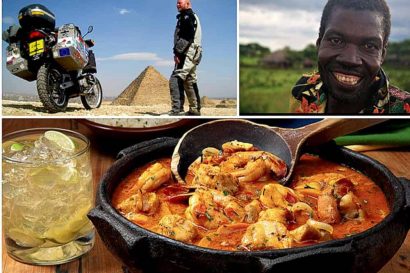 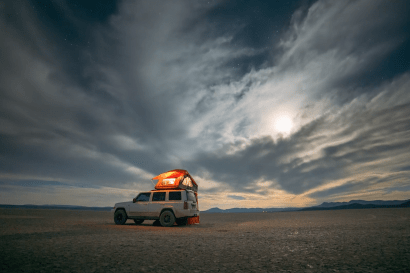 Video of the Day: Treeline Outdoors and Andy’s Adventure