Early in the spring of 2014 I attended the product launch for the new Aprilia Caponord Travel Pack. Sitting in a conference room as a team of Italian engineers delivered a presentation detailing the bike’s many technological advancements, I had to marvel and the state of the modern motorcycle. Delivered with more patents than any other newly released motorcycle, it was mind boggling how they were able to fit so much technology into one machine. Looking around the room, I could see a few of my fellow journalists shaking their heads. Had Aprilia gone too far with the electronic wizardry?

When ABS first entered the motorcycle market more than 20 years ago, riders worldwide were not universally pleased. I was one of the first to use ABS on a motorcycle on my 1994 BMW K75S ABS. I bought it with less than 1,000 miles on the ticker as the first owner effectively returned the bike stating the ABS was, dangerous. Fast forward to today, I know for a fact my bacon has been saved more than once by the deft braking proficiency of an ABS system.

It wasn’t until very recently that electronic rider aids began getting extremely complex. With the introduction of multi-mode traction control systems, electronically adjusted suspension settings, selectable throttle maps, and variable ABS and linked braking systems, the modern rider has much to learn about their new bike.

This begs the question: Are these rider aids improving the experience, dumbing it down, or even causing more harm than good?

For those not apt to read manuals, electronic rider aids can present an appreciable safety risk. Mismanaging a traction control system or not fully understanding how a linked braking system or ABS setting works, is asking for trouble. Over the course of the last two years, our Expedition Portal team has tested more than nine brand new motorcycles, each offering some form of rider aid, many with multiple layers of electronic functions. We have learned first hand, when used properly they work beautifully. When mismanaged, they can bite you in the butt. 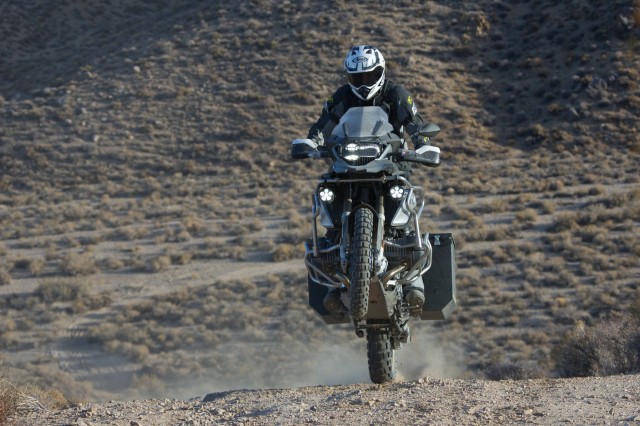 In 2013, on one of our favorite day rides of all time, our small team of three hit a local trail with two brand new BMW R1200GS motorcycles and a Ural Gear Up. The Ural was simple as a hammer, the BMWs were far more complicated. As we approached one hill appropriately named “Greasy Spoon,” we began to struggle. Every time we’d get a bike going forward, the rear wheel would spin and the bike would go haywire. After several moments at near exhaustion, we realized we had the traction control set to the least intrusive “Enduro Pro” setting. By toggling through the settings to the Rain mode, traction was more predictable with the bike working harder to keep wheel spin to a minimum. With the right setting engaged we rolled over the hill without problem.

On a ride in Ecuador last fall, our crew of four crossed paths with another American on a tiny backroad high in the Andes. He was up to his neck in trouble. As we carved our way through dozens of rocky switchbacks, his GS would periodically flop on its side. We surmised it was the traction control causing the issue. Each time he would enter a switchback and encounter a modest amount of wheel spin, the bike’s TC would hack the throttle leaving the rider to balance a 650 pound machine with no power, or intermittent power. Traction control switched off, he stayed upright for the remaining 10 miles of switchbacks by moderating wheel spin himself.

Last year on a trip to central Baja I forgot to disengage the ABS system on my BMW. When my riding mates stopped abruptly on the blind side of a hill, I quickly applied my brakes and with the ABS doing its job to limit skidding, I found myself passing my buddies by 20 feet instead of stopping next to them as planned. It’s a good thing I had 20 feet of runout.

The key to avoiding misuse of these features, and to get maximum benefit from them, is to simply read the manual, understand how they function, then practice putting them to use. And, remember you have them switched on/off or in a particular mode.

The last element to this discussion is relative to the effectiveness of the electronic features on any given bike. It’s not enough to have traction control––It has to actually work. Some motorcycles have systems which are simply better than others. The traction control on the new Suzuki V-Strom 1000 does great on the pavement, but is abysmal on gravel corrugations, or in sand. The traction control on the BMW 1200GS is so effective, it makes me a much better rider than I am. Ultimately, good or bad, the utility of these features is left to the rider’s proficiency in putting them to proper use. 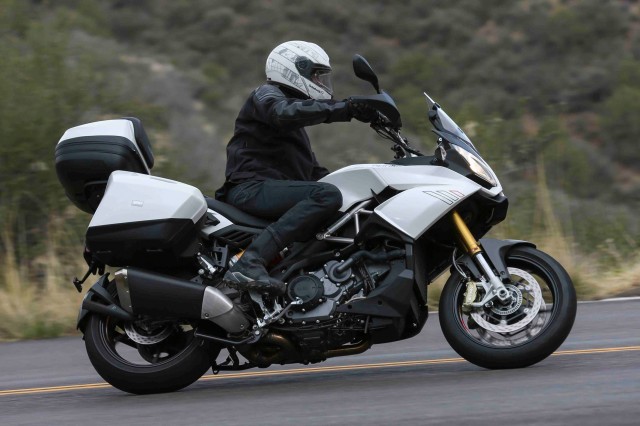 One of the most advanced systems ever applied to a motorcycle, or any vehicle for that matter, the ADD system on the Rally is capable of “reading” the road. It can even recognize the rider’s unique riding style, and in nano-seconds, adjust the suspension front and rear. It even takes into consideration the vibrations emanating from the engine. It knows when it’s being pressed into a turn, when it has arrived at the apex, and even when being pushed into the turn’s exit. It automatically adjusts for the added weight of luggage and a pillion. 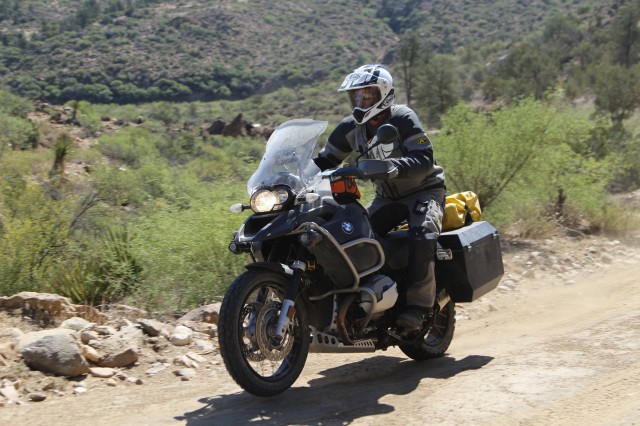 For riders wanting to hoon it off-road and treat their GS like a hulking dirtbike, the Enduro Pro setting activates, or deactivates, a host of systems. Designed to work only when the bike is fitted with knobby tires, the Enduro Pro mode deactivates the rear ABS system so the rider can slide the rear wheel as needed. It also provides more spontaneous throttle response and shifts the electronic suspension settings to a more firm position to resist bottoming out. The Traction Control system and Automatic Stability Control settings are detuned to allow the rider to control wheel spin with the throttle as needed. Think of it as the opposite of the Rain setting, which is designed to keep you alive. The Enduro Pro setting gives you all the potential you would ever need to really hurt yourself. 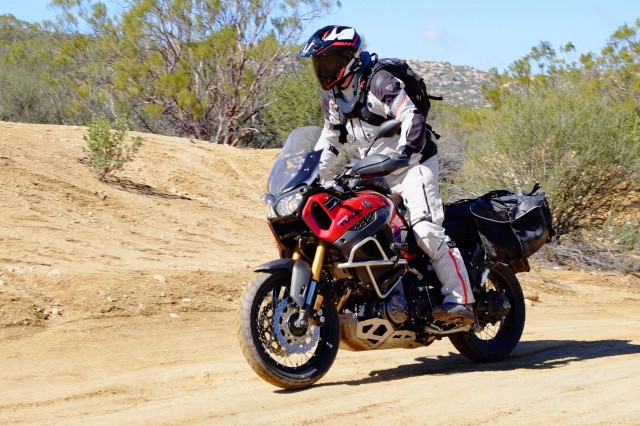 Yamaha’s unique braking system for their big adventure bike requires complete understanding of how it works to maximize its effectiveness. When applying the front brake, the linked braking system also delivers some brake pressure to the rear. If the rider applies the rear brake first, it decouples the Unified Brake System allowing the rider independent control of rear and front brakes. The ABS system cannot be switched off. 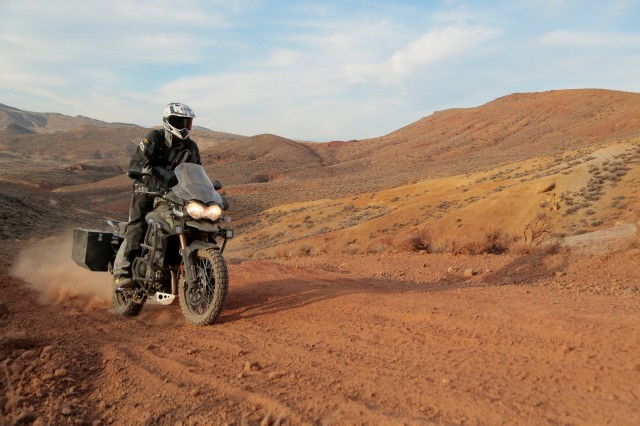 Attached to the rear shock unit of the Super Adventure is a Suspension Control Unit that continuously adapts the damping to real-time changes in the road surface. Stroke sensors in the front and rear shock assemblies measure suspension travel and in tandem with accelerometers on the chassis, instantaneously fine tune the suspicion for optimal ride quality. In addition to this, the rider can toggle between Soft, Street and Sport modes. The system also senses when the brakes are being applied and initiates the “Anti-Dive” function, which stiffens the forks for more precise control. The system can also detect the amount of load on the bike with gear and pillion, and adjust the suspension accordingly.

These are just a few of the advanced features entering the motorcycle segment. Others include cruise control, launch control, and even systems designed to keep your front wheel on the ground during hard accelerations. For each scenario whereby a system is designed to improve the ride, a situation can be created making those systems a hindrance. Understanding what you want of the bike will determine which of these advanced rider aids you need to employ, or switch off if you can. Are they an improvement to the experience of riding a motorcycle? I say they are.

On the Devil's Doorstep 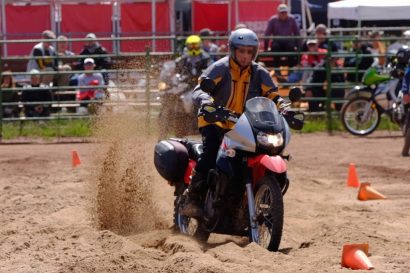 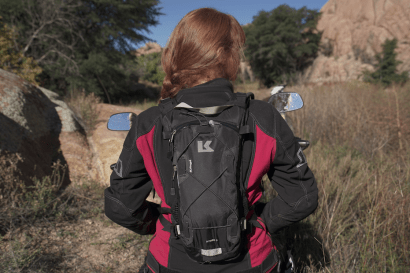 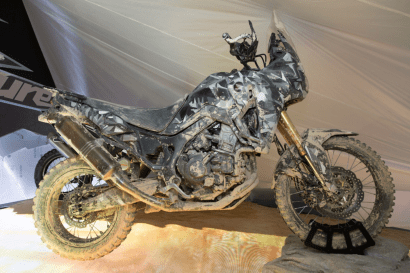