With every successive step the trail got steeper and our brief rests more frequent. We didn’t just stop to fill our lungs with gulps of thin air, but also because the view was so immense we couldn’t take it in at a glance. Every momentary pause gave us time to look deeper into the valley and at the trail ahead. It was a stunning sight to behold.

Directly in front of us was the Huaytapallana glacier, a jumble of ice draped over an impossibly steep rock face. Flanking either side of the glacier towered the twin peaks of Huandoy and Huandoy Sur, both piercing the sky at over 20,000 feet tall. In the distance we could hear a waterfall periodically interrupted by the rush of a gentle wind. Adding to the serenity of the scene, and as if on cue, an eagle soared overhead linking swooping turns as it caught one thermal after another until it was out of sight, lost in the blue. 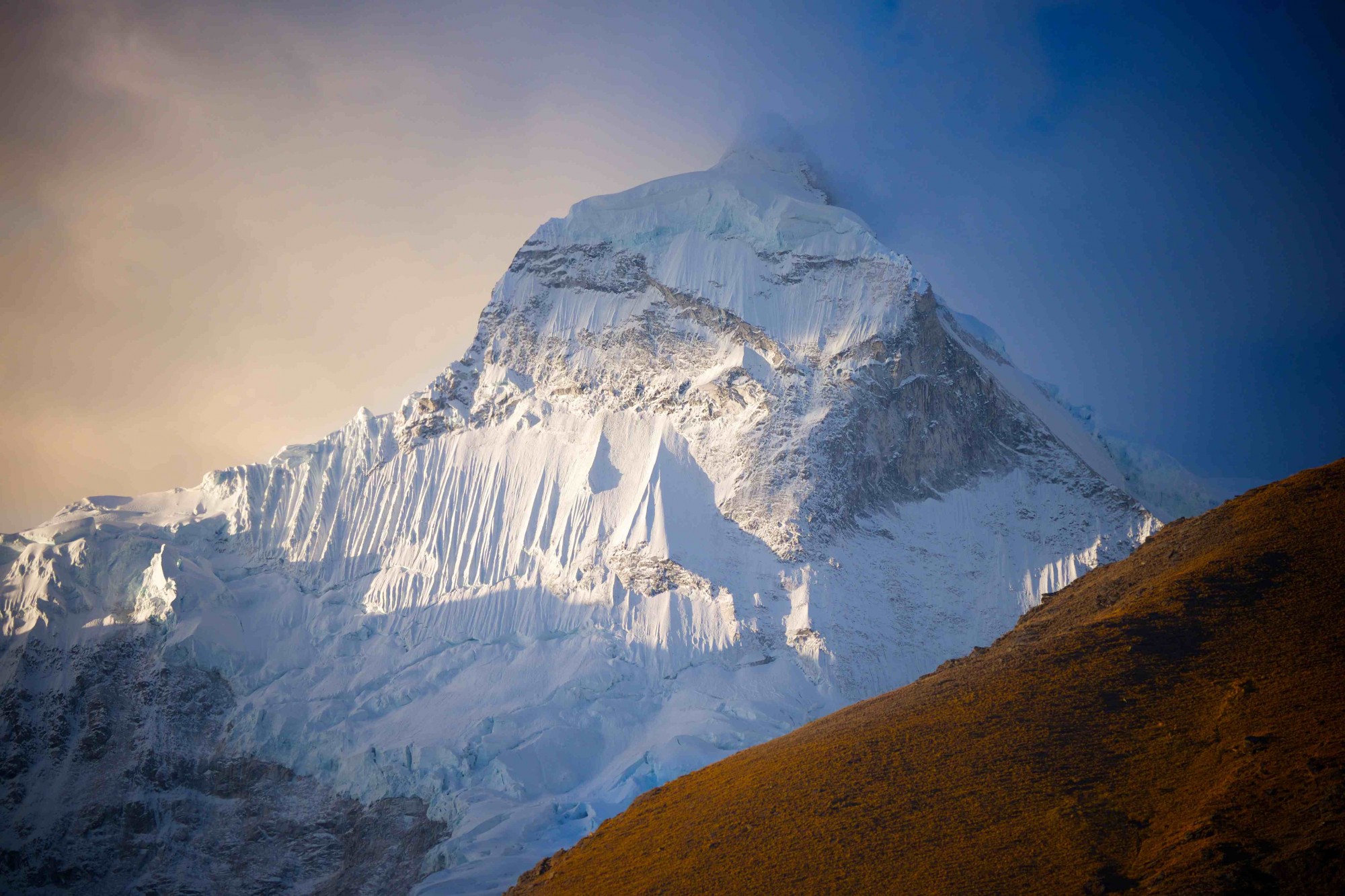 As we picked our way through boulders and the final section of trail, we arrived at a small turquoise lake perched on a ledge at 14,000 feet. We dropped our packs, snacked on sandwiches, and spent the next hour lounging on rocks and gazing at massive ice-capped peaks. If there is a better way to spend a morning, I haven’t found it.

For the adventure traveler, Peru is a bucket list destination but most people associate the country with iconic images of trekkers standing on the escarpments of Machu Pichu. Not to say that isn’t a worthy visit, but just to the north is another equally impressive attraction, the ivory peaks of the Cordillera Blanca.

The second highest mountain range in the world, the Cordillera Blanca have more than 33 summits over 18,000 feet with the tallest, Huascarán, breaking 22,000 feet. Despite its proximity to the equator, the range has 663 glaciers including one ice cap. As mountains go, they rival the enormity of the Himalayas and the beauty of the Alps. The region’s most famous peak, Alpamayo, is touted by many as the most beautiful mountain in the world. It is also one of the more elusive and only accessible by way of a multi-day approach on foot.

The bulk of the Cordillera Blanca is contained within the boundaries of Huascarán National Park. Designated as a UNESCO World Heritage site in 1985, it encompasses 1,300 square miles and is webbed with dozens of serpentine gravel roads and trekking trails. Bring your best set of lungs if you plan to walk those tracks as many of them reach staggering heights. Difficult as some of those hikes are, your efforts will be rewarded with dramatic vistas beyond description. 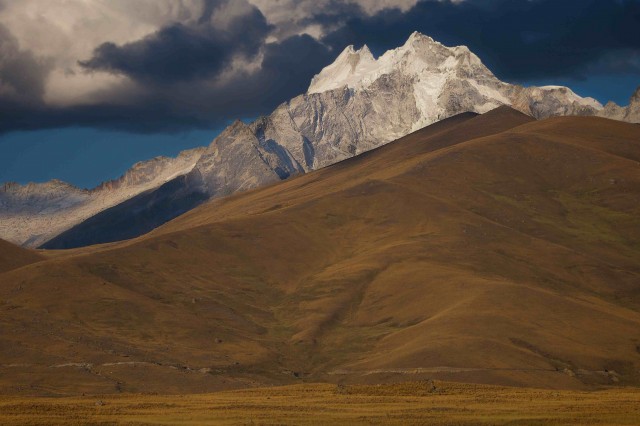 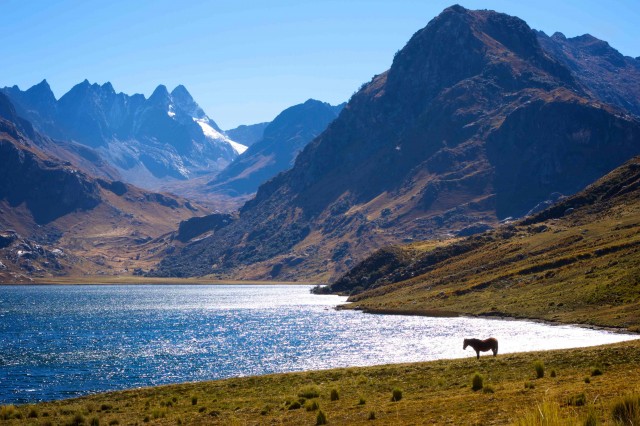 Like most travelers to the region, we arrived in the quaint town of Huaraz weary from a long bus journey and slightly short of breath. Huaraz is a common jumping off point for forays into the park and a good opportunity to acclimatize to the thin air. I have a fondness for South American towns and thoroughly enjoyed walking the colorful streets of Huaraz, some quiet and tranquil, others vibrant and bustling with activity. Just beyond the edge of town, the 20,700 foot summit of Huantsan glistened in the morning sun reminding us why we had traveled so far.

The place lost to time

Despite the natural beauty of the area and the charm of its modern towns and villages, other cultural treasures offer a glimpse into Peru’s age of antiquity. Allowing ourselves more time to adjust to the altitude, we spent a day exploring the interior of the mountains and drove to the UNESCO World Heritage site at Chavin. Like many of the country’s archeological sites, the ancients who lived in this part of the mountains created elaborate structures festooned with intricate works of carved art. Originally founded in 900 BC, the ceremonial complex at Chavin predates Machu Pichu by more than 2,000 years.

A central feature of Chavin’s temple is a stone monolith called the Lanzon. Burried deep within a labyrinth of tunnels and dark antechambers, the 15 foot tall deity depicts a key figure in the Chavin religion. With its curved fangs, down turned eyes, and ominous placement in the depths of the temple, it evokes haunting images of ritualistic life for the Chavin.

After a lengthy negotiation between our guides and security officials, we were allowed a rare opportunity to enter the inner chamber. Standing just inches from the Lanzon I marveled at the precision of each carved line. It appeared as if it had been erected just days before. We shuffled around the cramped quarters of the room, whispering as if to not disturb the sprites within.

Throughout the site there are images of the condor, puma and serpent, the three sacred animals that represent the sky, earth, and underworld. Although the original inhabitants no longer dwell in the valley, their ghostly presence is palpable. 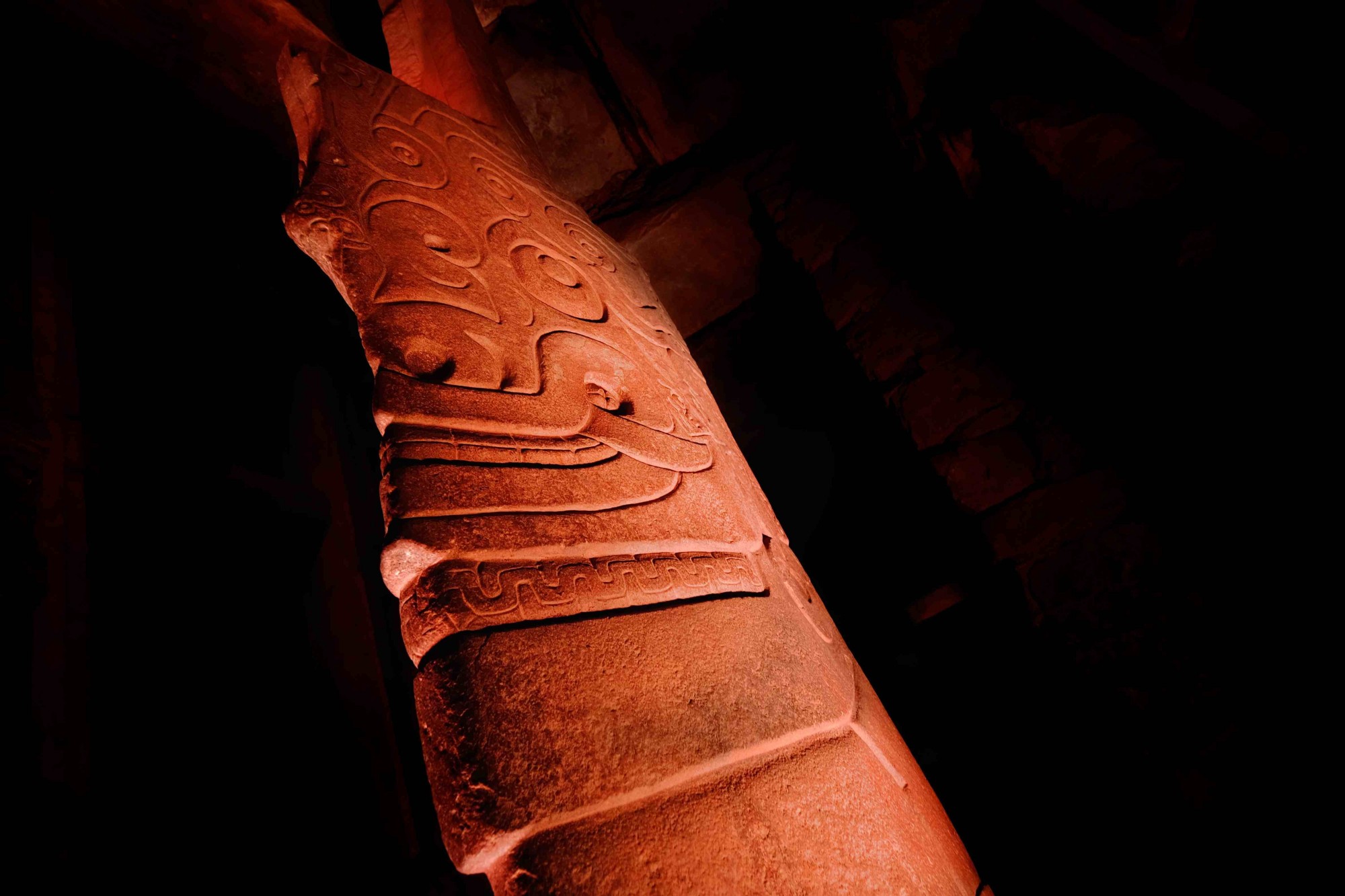 A walk to the sky

With our sightseeing concluded, we loaded our packs, laced up our boots, and set out to climb into the upper reaches of the Llanganuco valley. Considered one of the most scenic walks in the range, the trail leading to Lago 69 starts with a gentle grade the locals refer to as “Incan flat,” before culminating in a series of steep switchbacks topping out at 16,000 feet. With the last few steps of the climb, the view opens to reveal an alpine amphitheater worthy of the effort required to reach it. Said to display every shade of blue in the spectrum, the placid lake sits below a wall of craggy stone with crystalline peaks dominating the skyline. A vivid collage of contrasts, blue on white, rock and ice, it is undoubtedly one of the most beautiful places I have ever visited. A fitting objective to our travels in the Cordillera Blanca, it only wetted my appetite to see more. 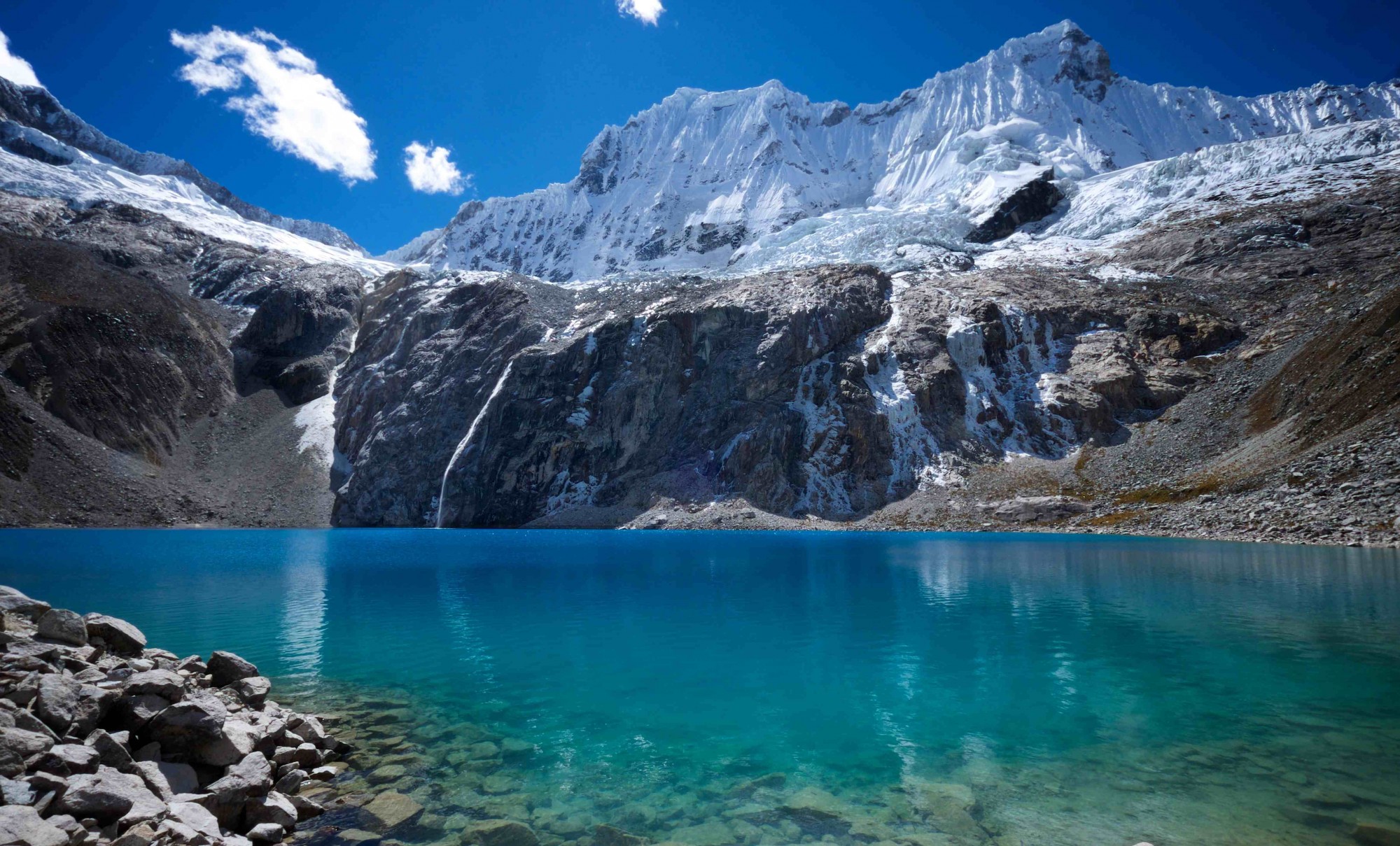 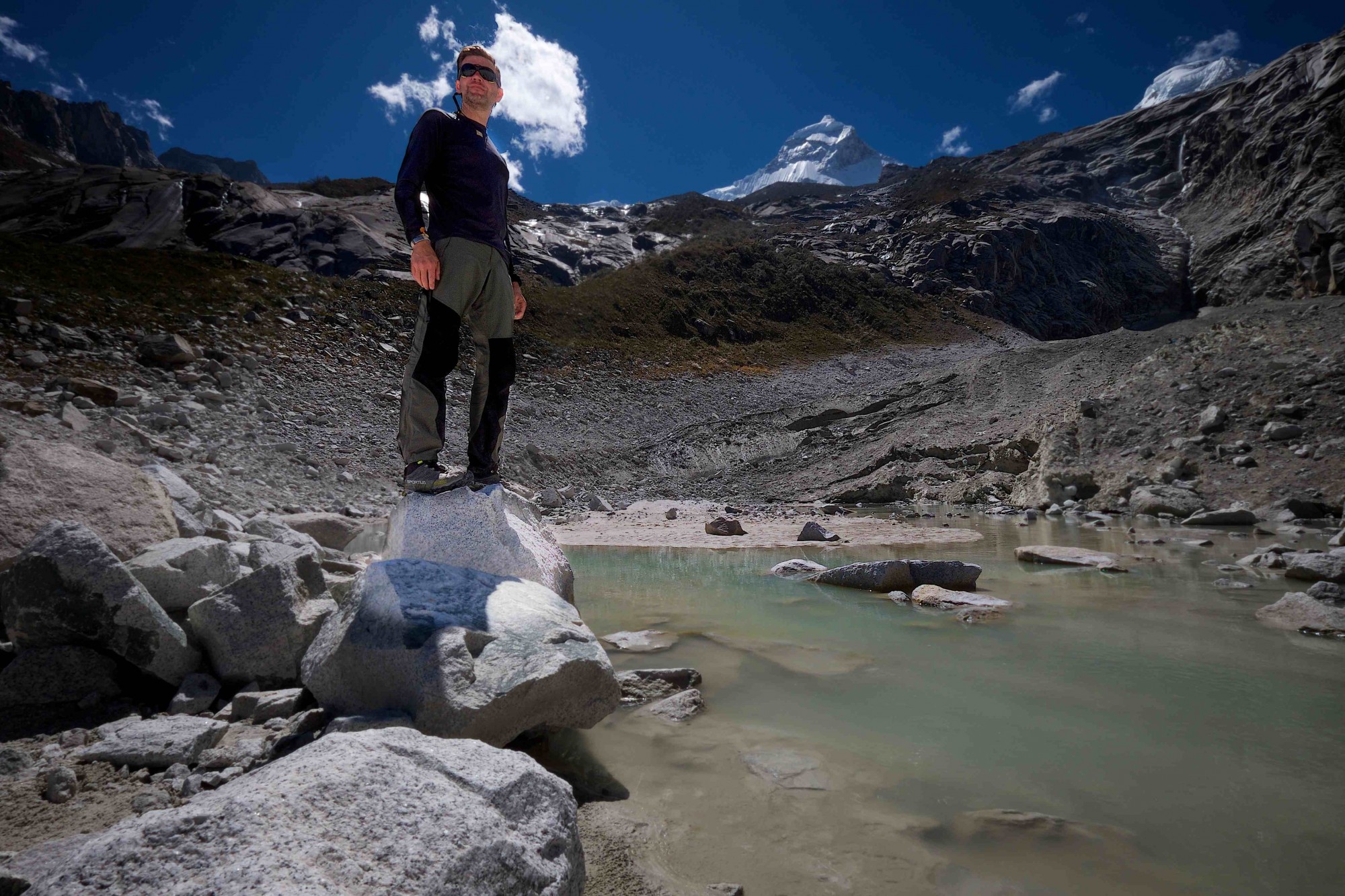 As a first time visitor to Peru, I arrived with many preconceived expectations, most formed by casually reading travel blogs and guidebooks. On the trip back to Lima and subsequently home to the States, I realized that the Peru I thought I would experience was very different from the Peru I discovered. It is far more majestic, colorful, and intoxicating than I could have ever imagined. What I loved most is how the mountains, the people who live within them, and the legacy of their ancestors, all exist in perfect harmony.

I was also moved by the nebulous passage of time in the Cordillera Blanca. Peru sits at the nexus of fascinating trajactoriris of geological and historical timelines. It’s a place where you can walk out the back door of a modern mountain lodge and within minutes be staring at ancient skulls tucked into the dark recesses of a burial mound. Locals dress as they have for centuries and the valleys wear the scars of millions of years of glaciation. Another aspect of Peruvian time is how fleeting it is. My time there went all too quickly.

It has only been a few weeks since my return from Peru. My bag is still not fully unpacked and my boots still wear the dust of the Andes on their soles. I know I’ve found a special destination when I’m slow to let go of the experience and most of all––eager to return. 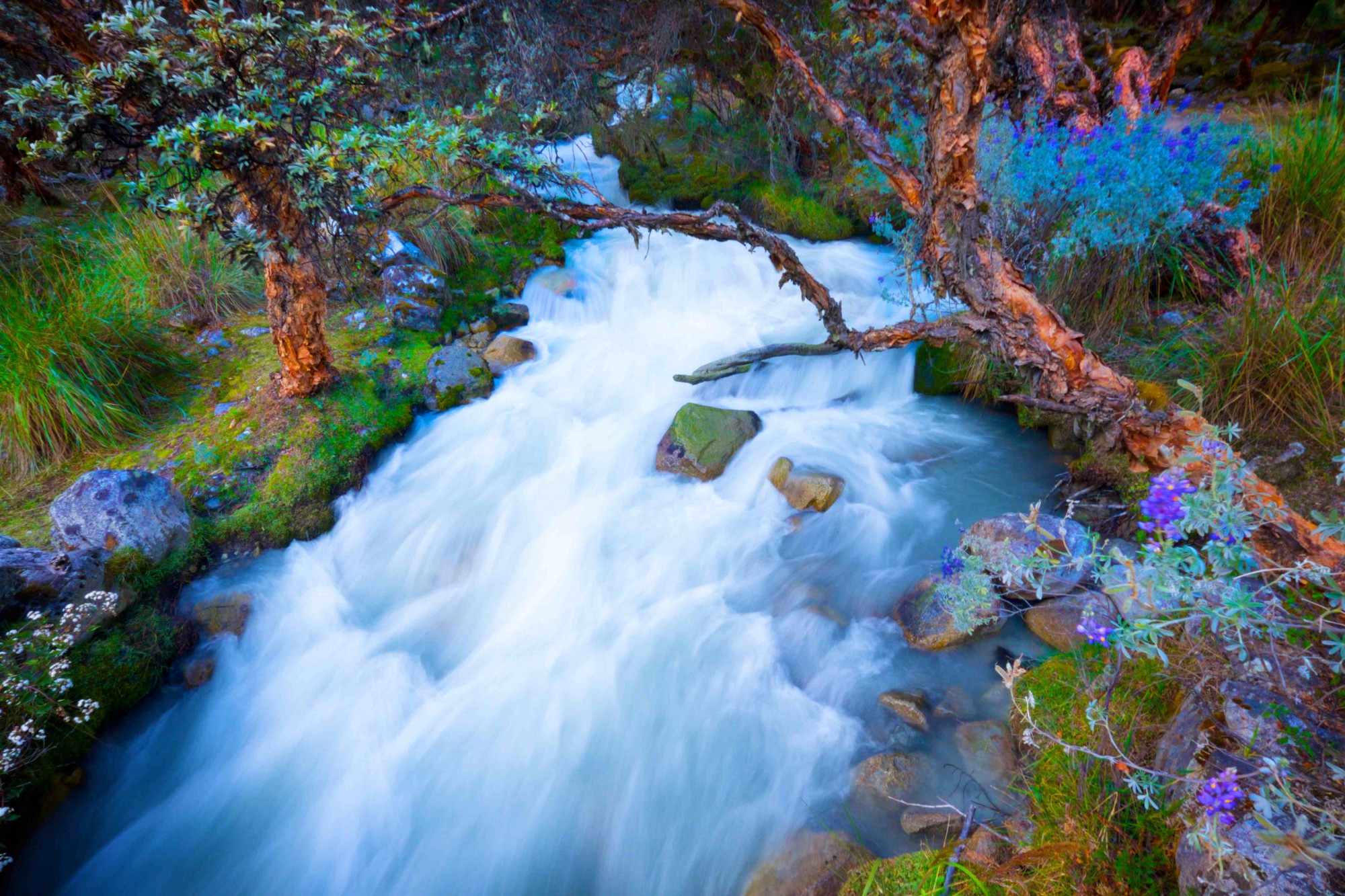 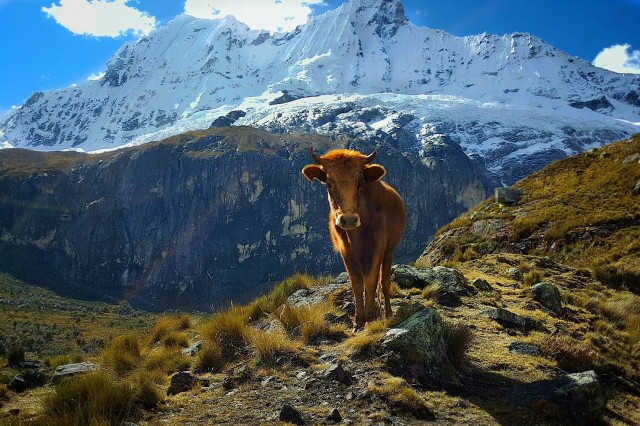 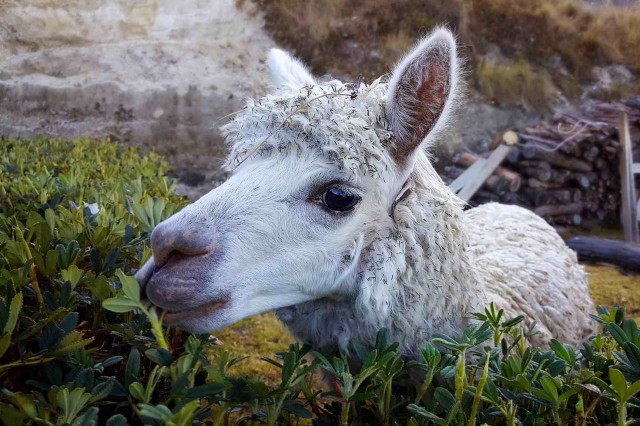 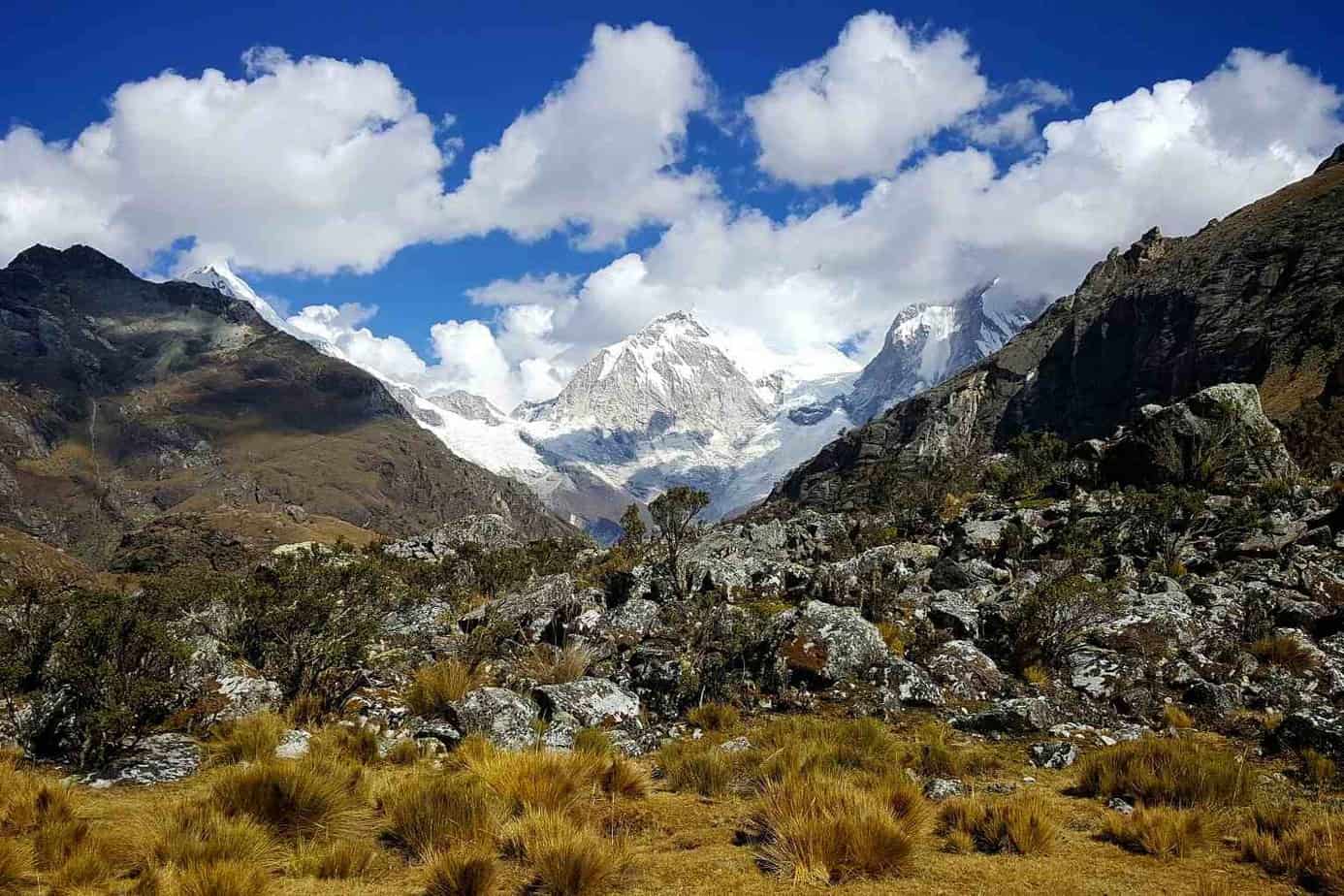 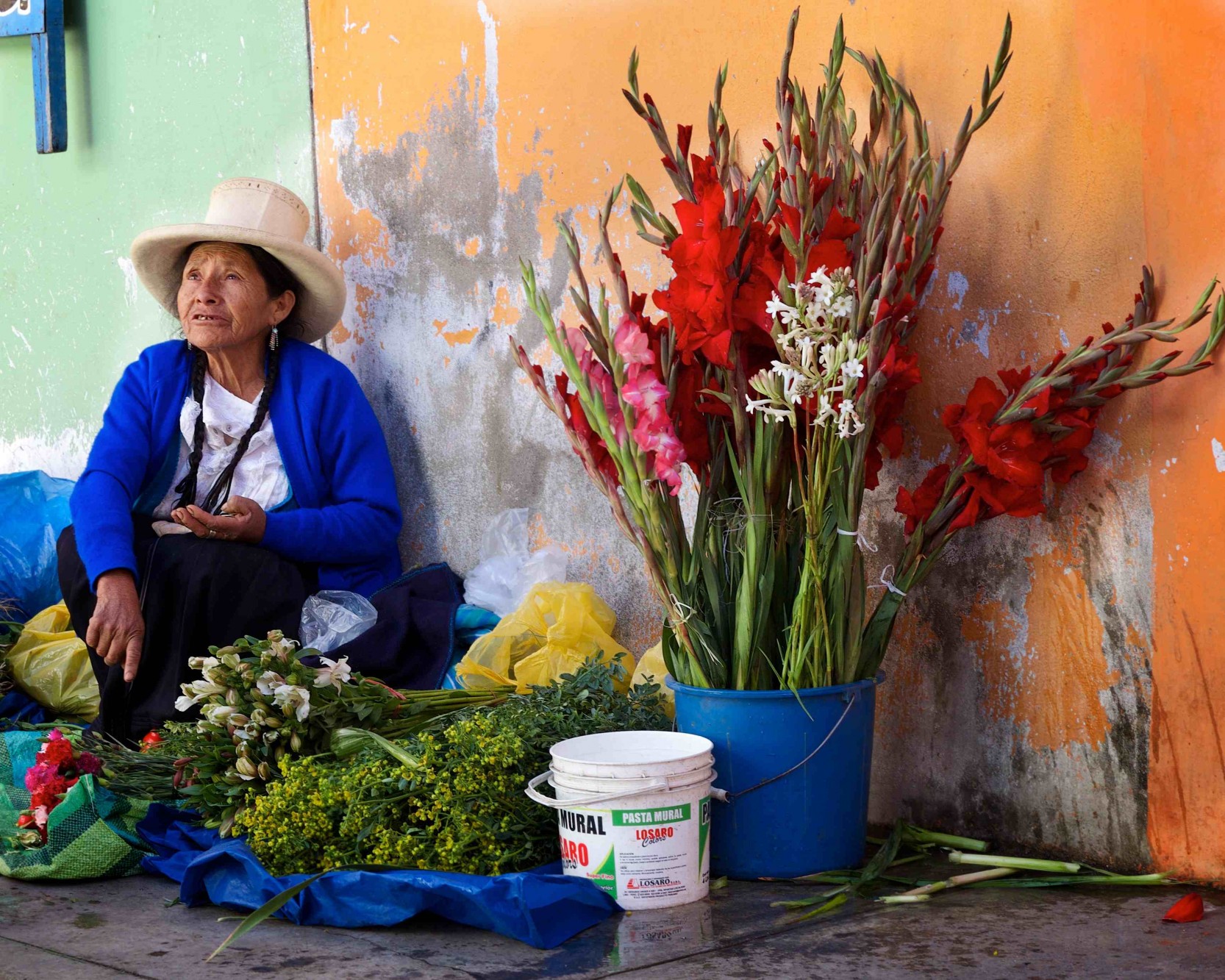 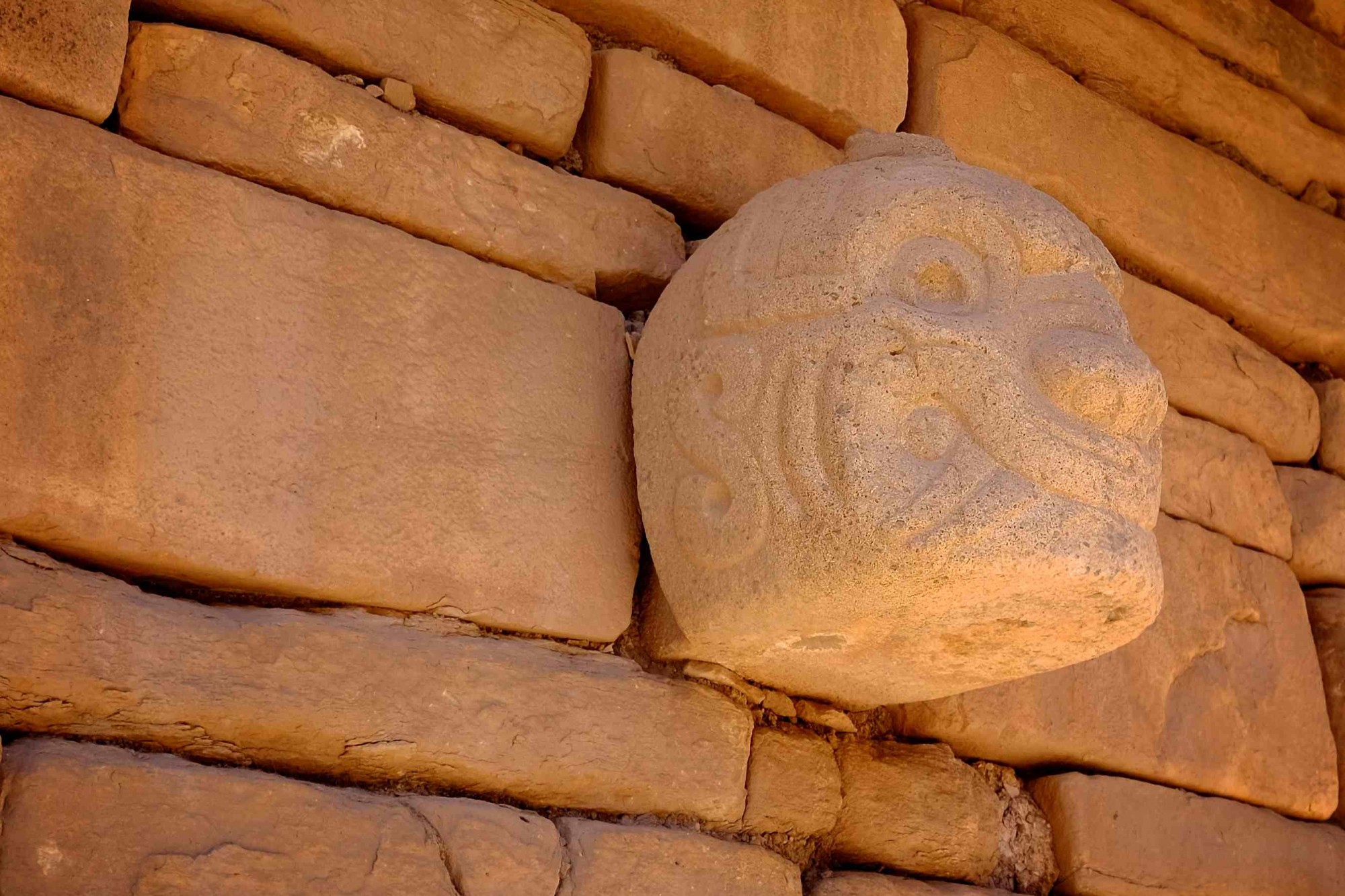 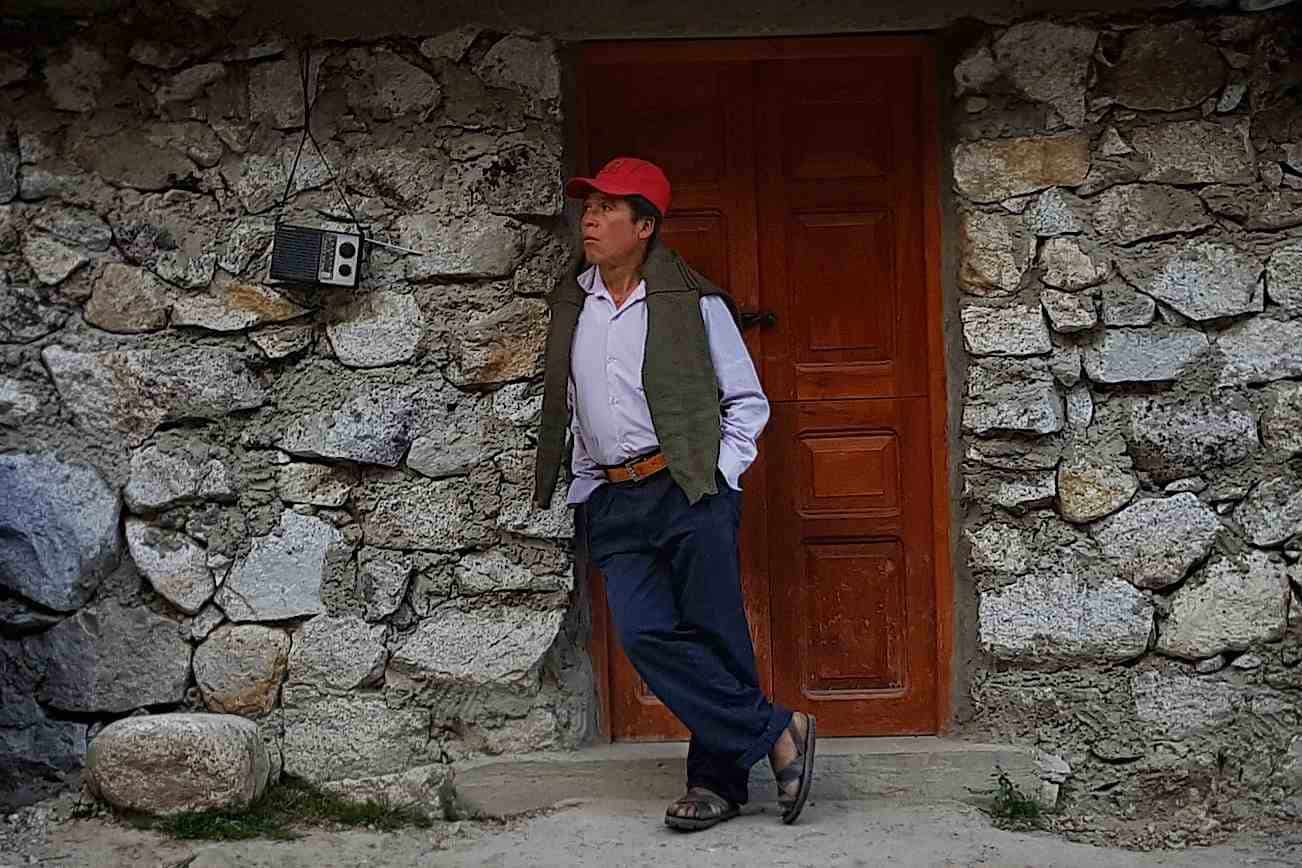 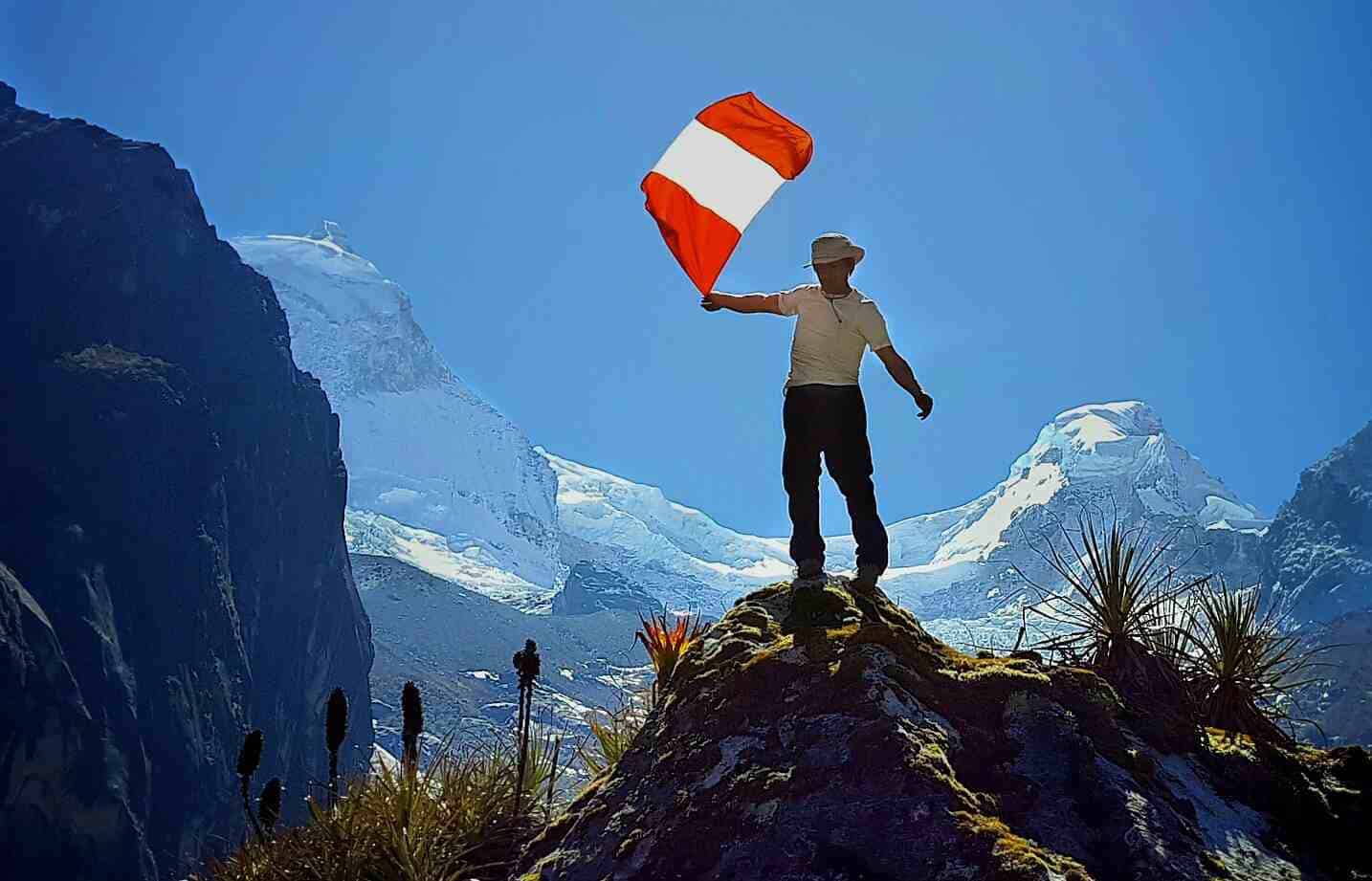 For those of us in the upper half of the Americas, getting to Peru and the Cordillera Blanca is surprisingly easy. By my calculations, my exact travel time from my front door in Prescott, Arizona to the shores of Lago 69 at a height of 16,000 feet, was only 22 hours. That includes flying time, bus transfers, and even four hours of hiking time.

Most flights to the capital city of Lima depart from Dallas, Atlanta, and Miami. Airfare is always relatively inexpensive given the exotic nature of the final destination. Prices for lodging and food, once outside Lima, are traveler friendly. Public transportation is easily accessed and lodging options are abundant and range from basic to luxurious. We stayed in a mix of small hotels and mountain lodges like the Llanganuco Mountain Lodge high above the mountain town of Yungay.

While there are regular flights between Lima and Huaraz, bus service is more frequent and far less expensive. The idea of taking a sleeper bus for the eight hour journey initially sounded terrible, but in retrospect, was wonderful. For the overlander with their own mode of transportation, the vast network of gravel roads weaving around the mountains promise endless hours of exploration. 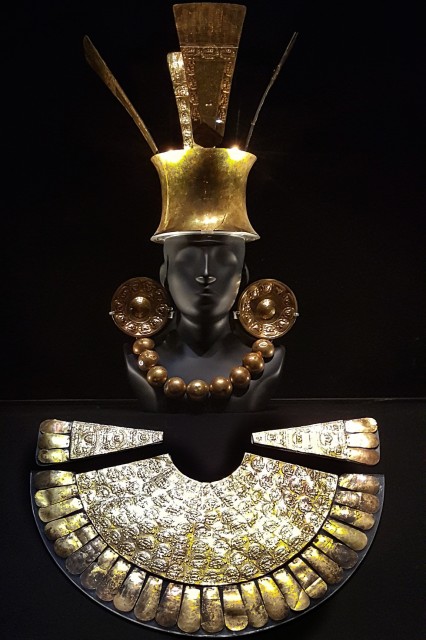 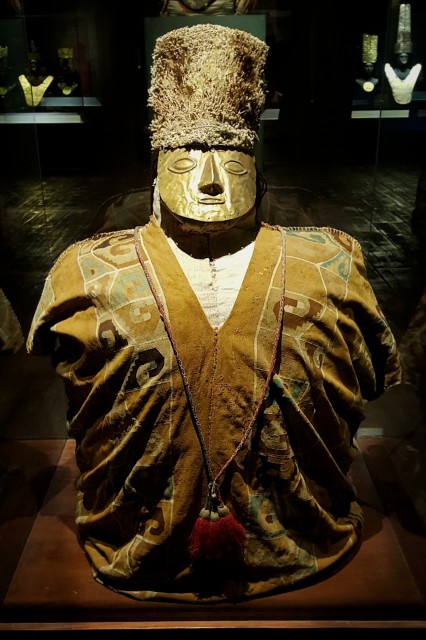 Like the rest of Peru, Lima is a study in contrast. Built around, and even atop, ancient ruins, it is a mix of new and old. The coastal area of the city is modern and polished. The colonial sections of the city still wear the architectural influences left behind by the Spanish. Although traffic is thick, Lima is vibrant and welcoming. For the food lover, it is a culinary destination you should put on your short list. I’ll go back again, if just for more pisco sours and copious servings of ceveche. 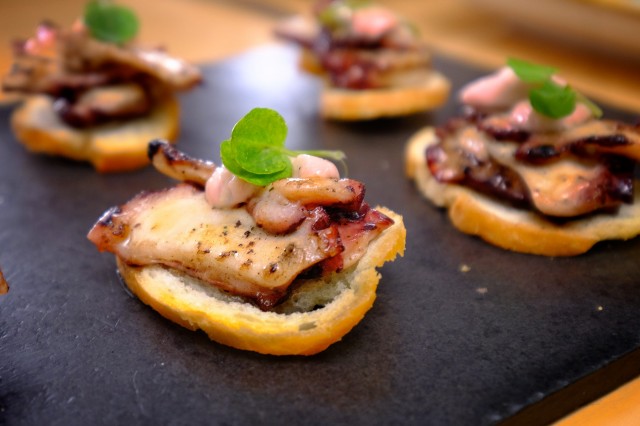 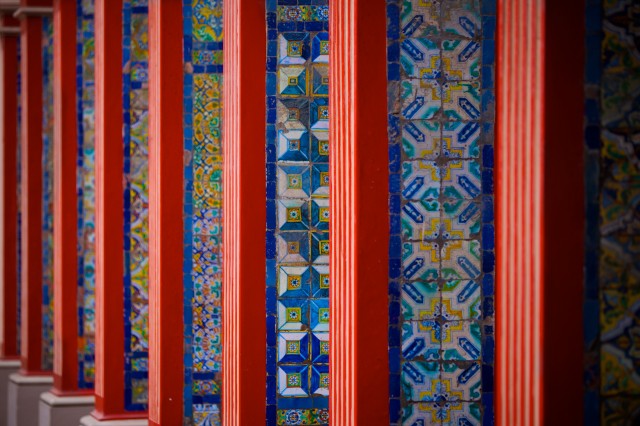 Cycling The Great Divide: From Canada To Mexico On Nor...
by Michael McCoy, venture Cycling Association
From $9.99From CAD$14.43 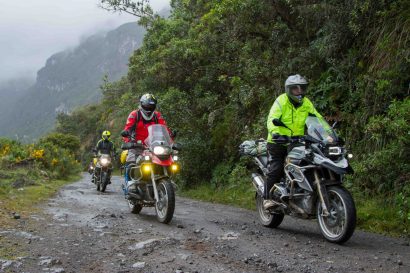 From the ExPo Vault: Yo Hablo Moto 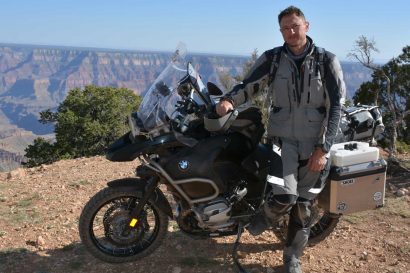 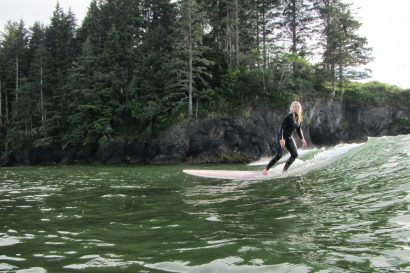