This article was originally published in Overland Journal’s Summer 2019 issue.

Lesotho’s smooth rolling hills and intermittent rocky crags, and the way each mountain’s many shades of green reflect a sheen onto the unfettered landscape will leave you breathless. Meeting Lesotho’s people, who are warm and quietly affectionate individuals with a great sense of grace and pride, will create memories you won’t soon forget. Perhaps it is this purity that makes this destination such a gift to the open-hearted traveller. Or maybe it’s Lesotho’s way of leading your inner explorer back in time, enabling the rediscovery of a fading existence that many in the West yearn for. 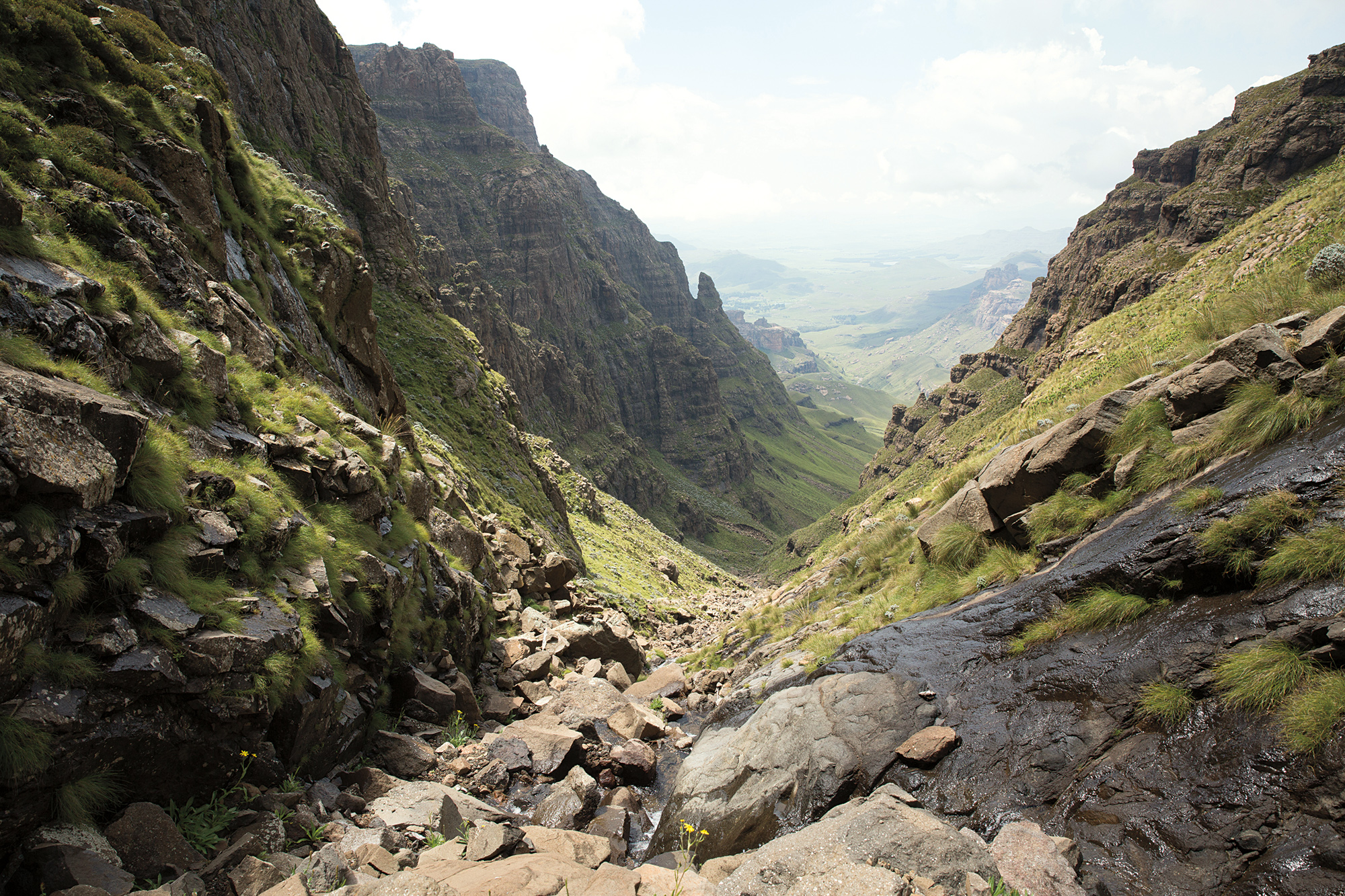 My two-week trip covered all three of the country’s terrains. Two-thirds of Lesotho is covered by an unpopulated mountainous region, which is then bordered by a zone of foothills where crop farming and herding takes place. The lowland belt, also fertile land and where most people live, dominates areas like Maseru, the capital city.

Lesotho covers just 11,718 square miles (roughly the size of the state of Maryland) and is completely encircled by South Africa. This miniature-sized, landlocked country shouldn’t be underestimated though, with its offering of first-class adventure and scenery of epic proportions. I started with a brief stint in Maseru while gearing up for the weeks of driving and exploring ahead. From here, I headed south on the A2 Highway and within a half hour was diverting from the road, heading in the direction of Thaba Bosiu, a sandstone plateau, one of Lesotho’s most historically significant sites. Bustling towns give way to long stretches of isolated countryside, blanketed with dry grassland and the occasional bluff. 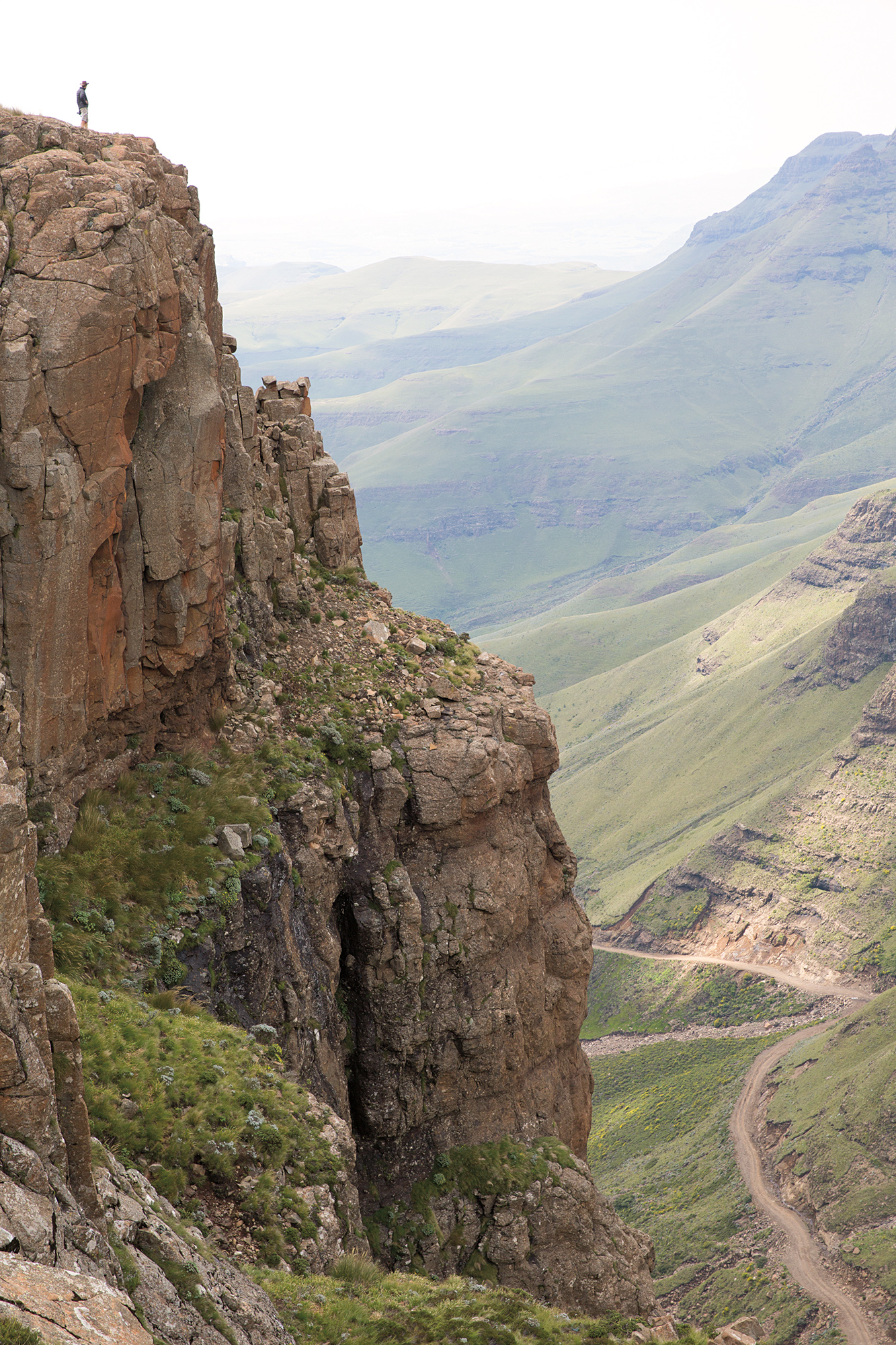 King Moshoeshoe I, ruler of Lesotho between 1822 and 1870, and known as the architect of the country’s unification, used Thaba Bosiu as a refuge, protecting his people from attacking tribes and European interests encroaching from the south. At this stronghold, Moshoeshoe named his people Basotho, the name they continue to use today. There is a belief that if you take a handful of dirt from the mountain, it will disappear the next morning, having been mysteriously returned to its magical location. As I hiked to the top of Thaba Bosiu, I could almost hear Moshoeshoe’s voice carried by the wind, whispering his tale of how this distinctive place came to be. In a way, being here offers the chance to let your mind meander back in time. Lesotho’s past, and in truth, our own, is painted into every scene. 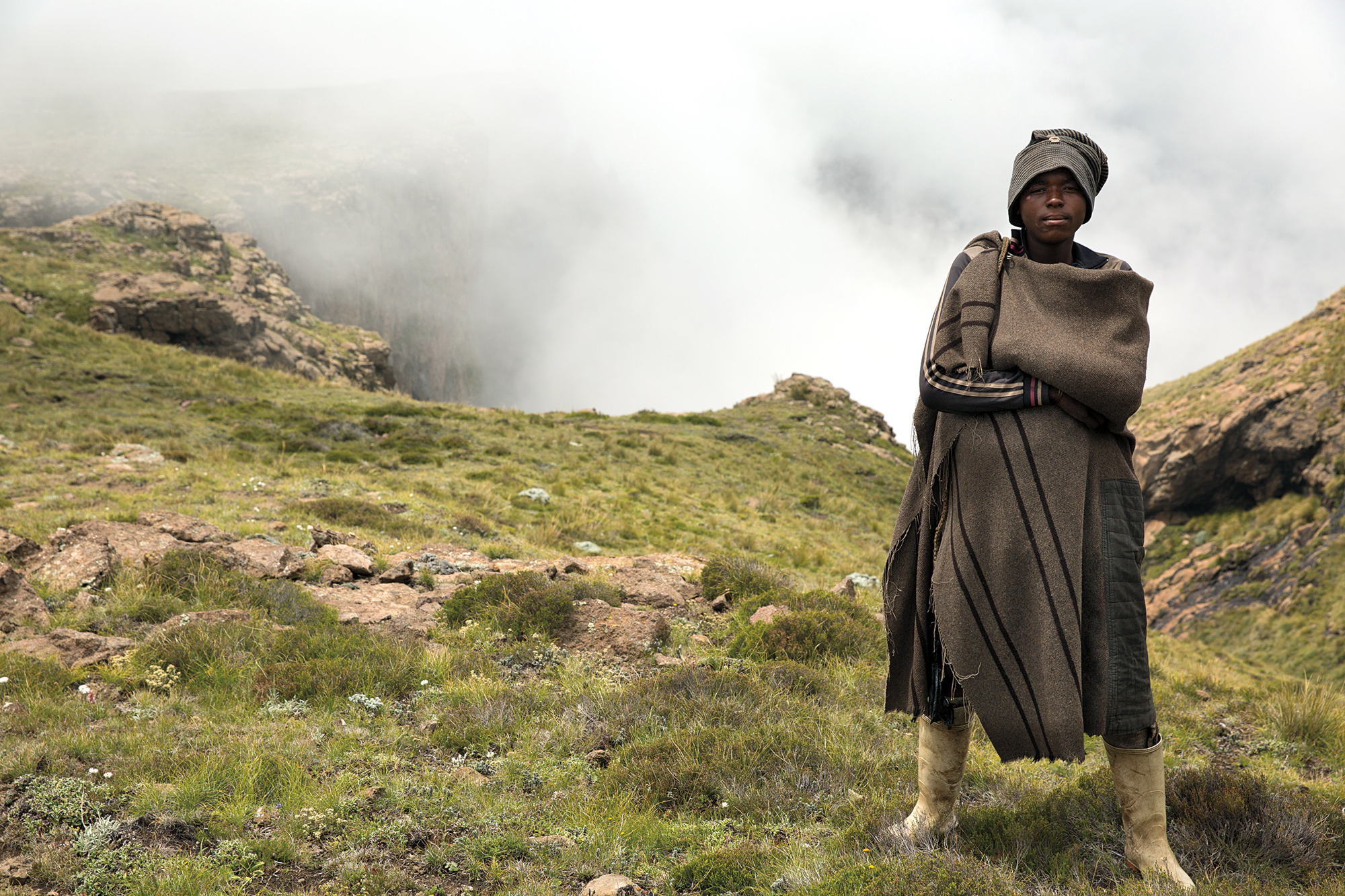 Outside of the capital, much of the country continues to live peacefully and simply. Venturing deep into central Lesotho, villages of well-built stone and thatched roof huts sit clustered against a sprawling backdrop of endless verdant hills. Neat and tidy homesteads rise and fall in perfect unison with each expanding slope.

Lesotho’s rustic way of life inspires visions of an existence before modern conveniences and leads you to contemplate how our ancestors embody a common heritage for all mankind. Even though we may not recognize our indebtedness to these societies, in many ways, all of our aspirations and development can be traced back to this earlier time. Travelling through Lesotho, the magic of our shared human story comes alive. 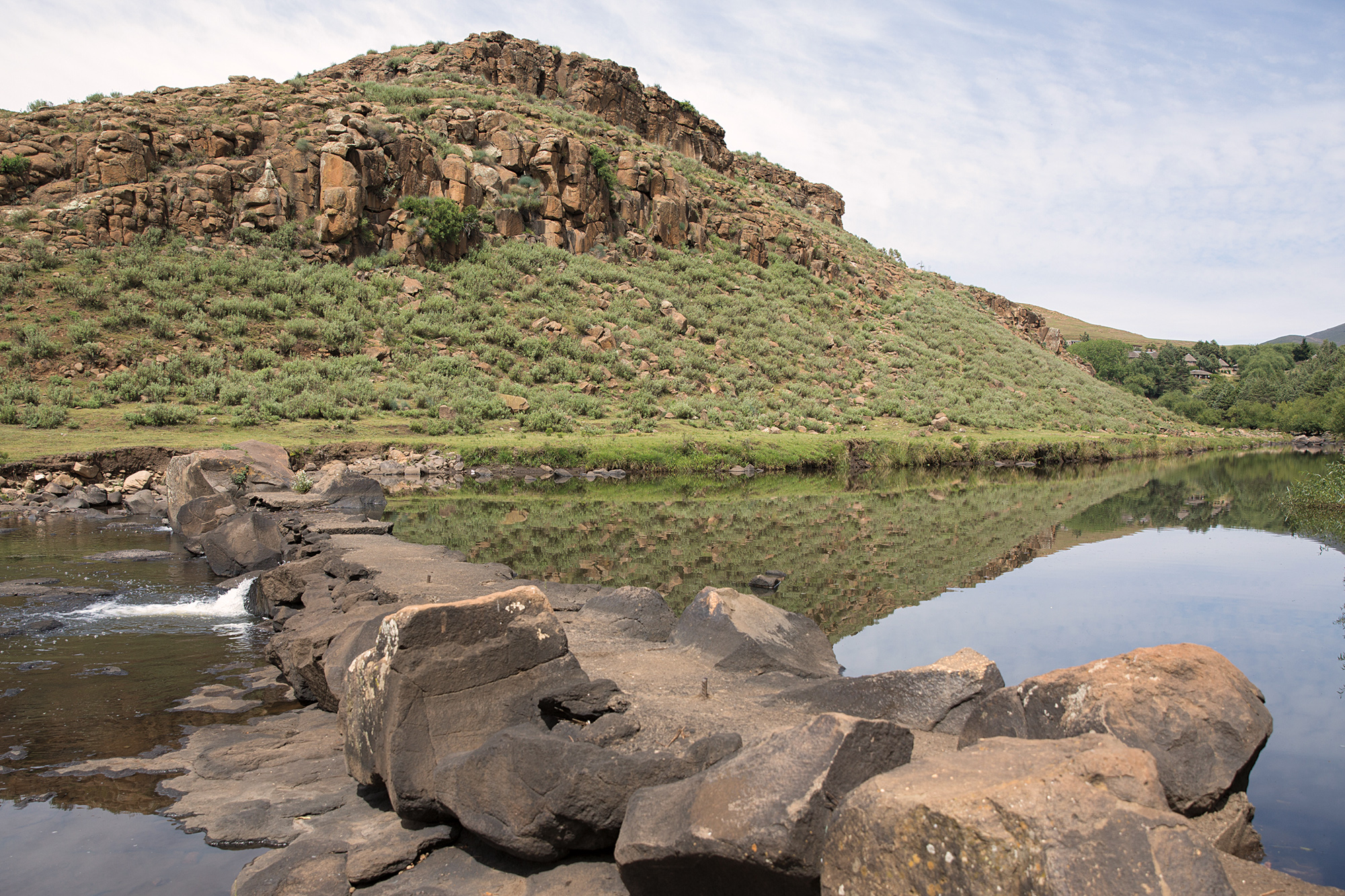 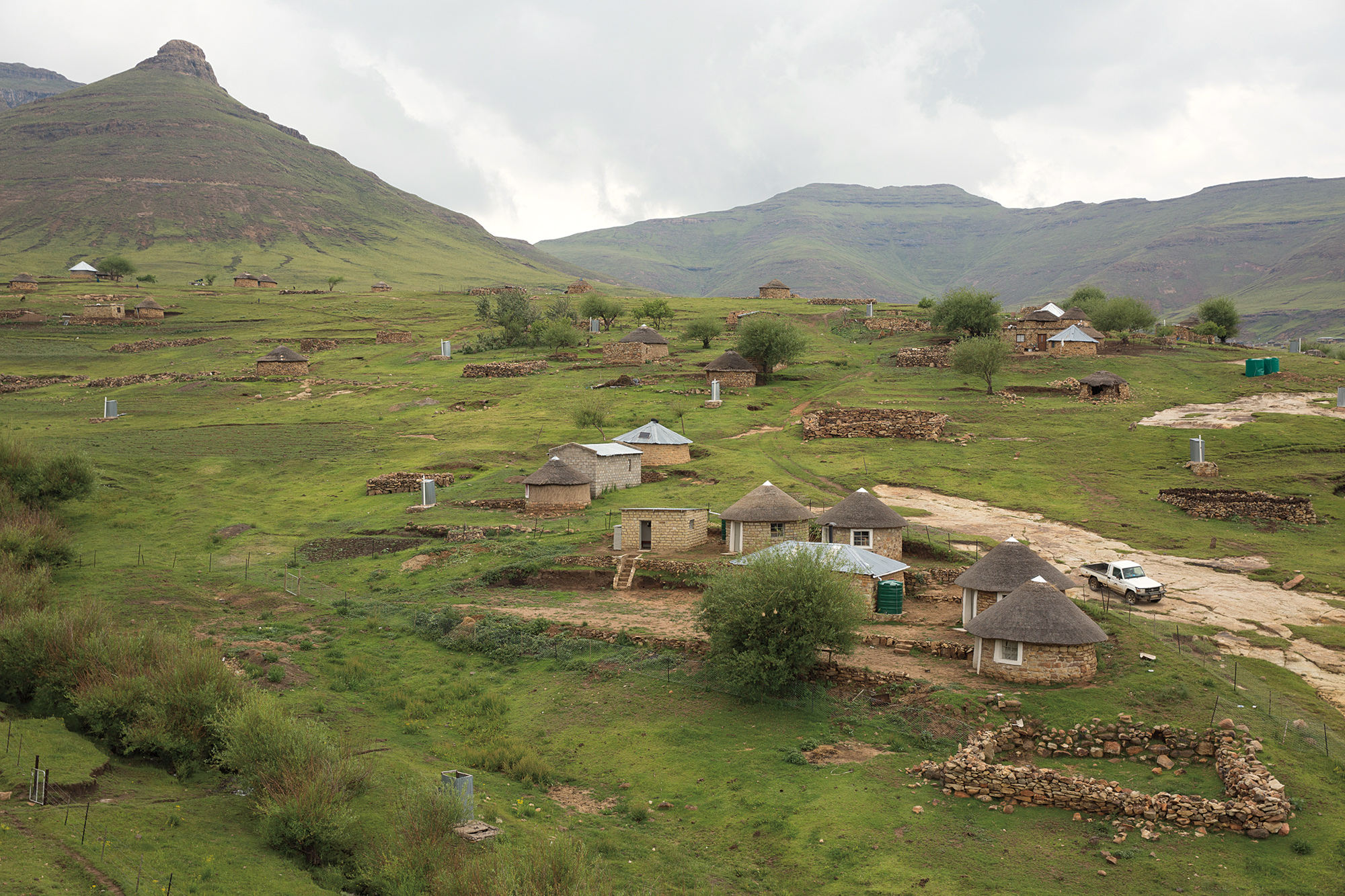 As I head south again, my mind wanders back to the present. The A5, a buttery-smooth, newly built highway makes the drive to Semonkong effortless. All that slows me down is the cadence of recurring steep inclines that take me into first gear, and the number of times I’m compelled to stop and admire the beauty that lies out before me.

I soon came to understand why Lesotho was once known for its textile production. In every direction, flock tenders and sheep dotted the landscape. At a viewpoint, shepherds wearing the famed Basotho outfit of a thick wool blanket, balaclava, and knee-high gumboots paused to offer firm handshakes accompanied by broad grins, before grabbing the reins of their horses and continuing on their way.

Lesotho’s landscape is unique, as it has the highest low point of any country in the world. As I accelerated the vehicle to climb up and over each rise, the reason for its nickname of Kingdom in the Sky became clear. 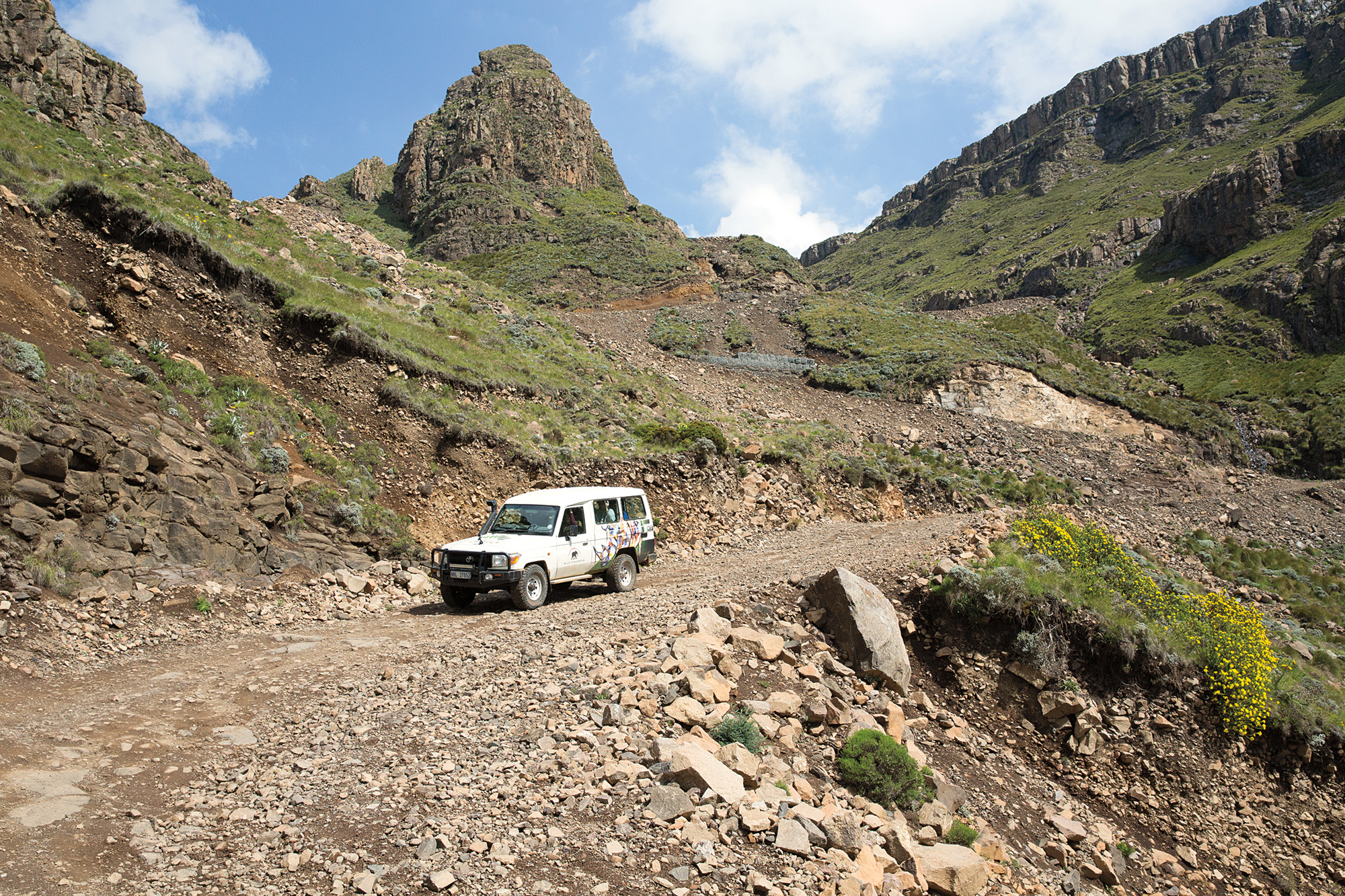 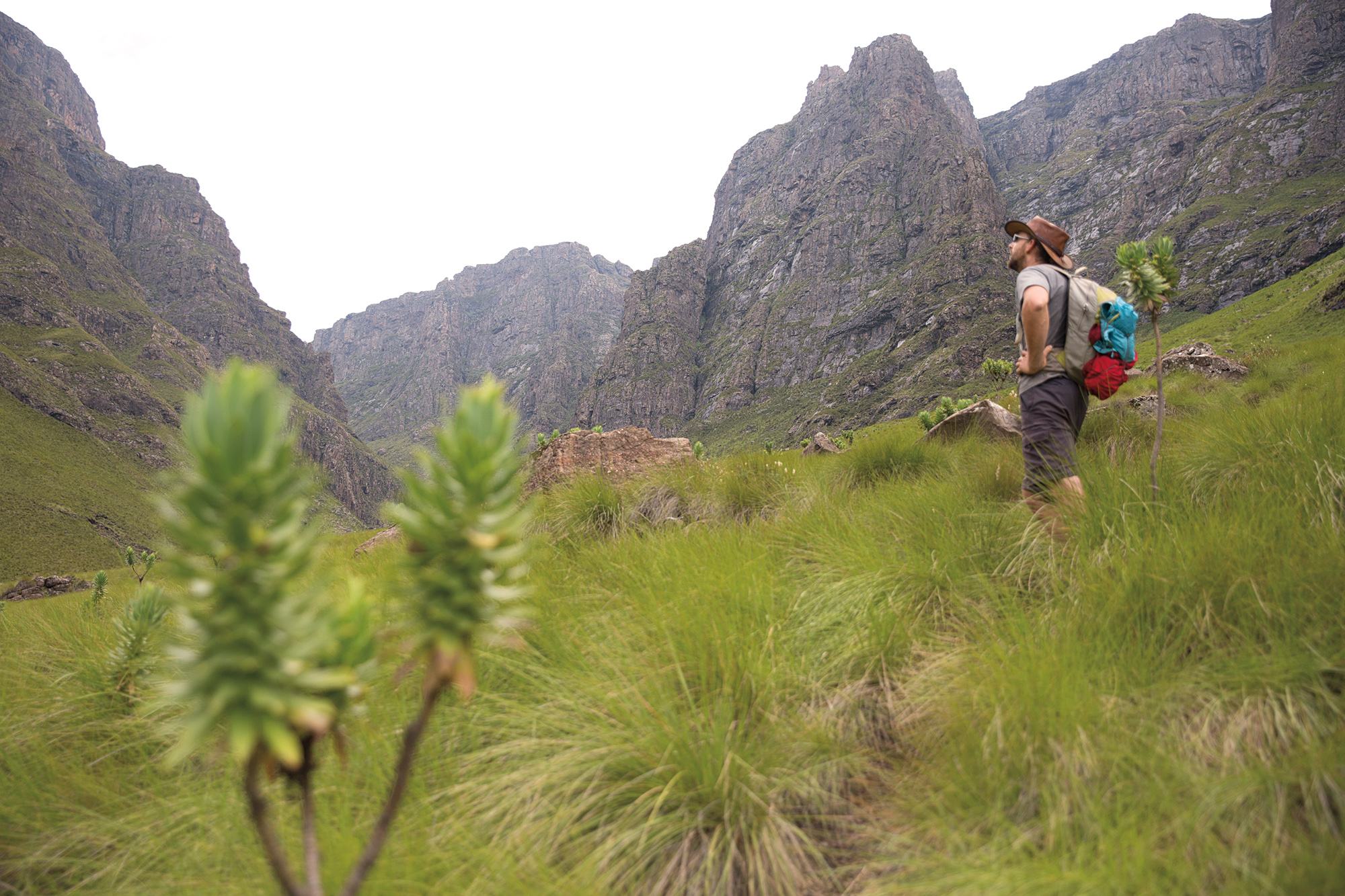 It is Lesotho’s mountain ranges that left the biggest impression on me, their jagged peaks imprinted upon my memory. After passing through sections of the Thaba Putsoa range, I arrived at my destination of Semonkong. Walking the dusty streets of the quaint yet lively town, where horses are the main mode of transportation and the corral is at the center of it all, it felt as if I’d stepped into a Hollywood Western.

Early the next morning, I hiked to the nearby 192-meter-high waterfall, Maletsunyane, one of the highest single-drop waterfalls in the world. The hike starts directly from Semonkong Lodge and leads through the outskirts of town, where you’re provided with a glimpse of daily village life. Cooking over an open fire, transporting grain to market, watering horses—it all happens before your eyes. I arrived at the outlook and was struck by Maletsunyane’s beauty. The falls were on full display, visible from every direction. It’s worth visiting the area for a few days, approaching the falls from different angles. 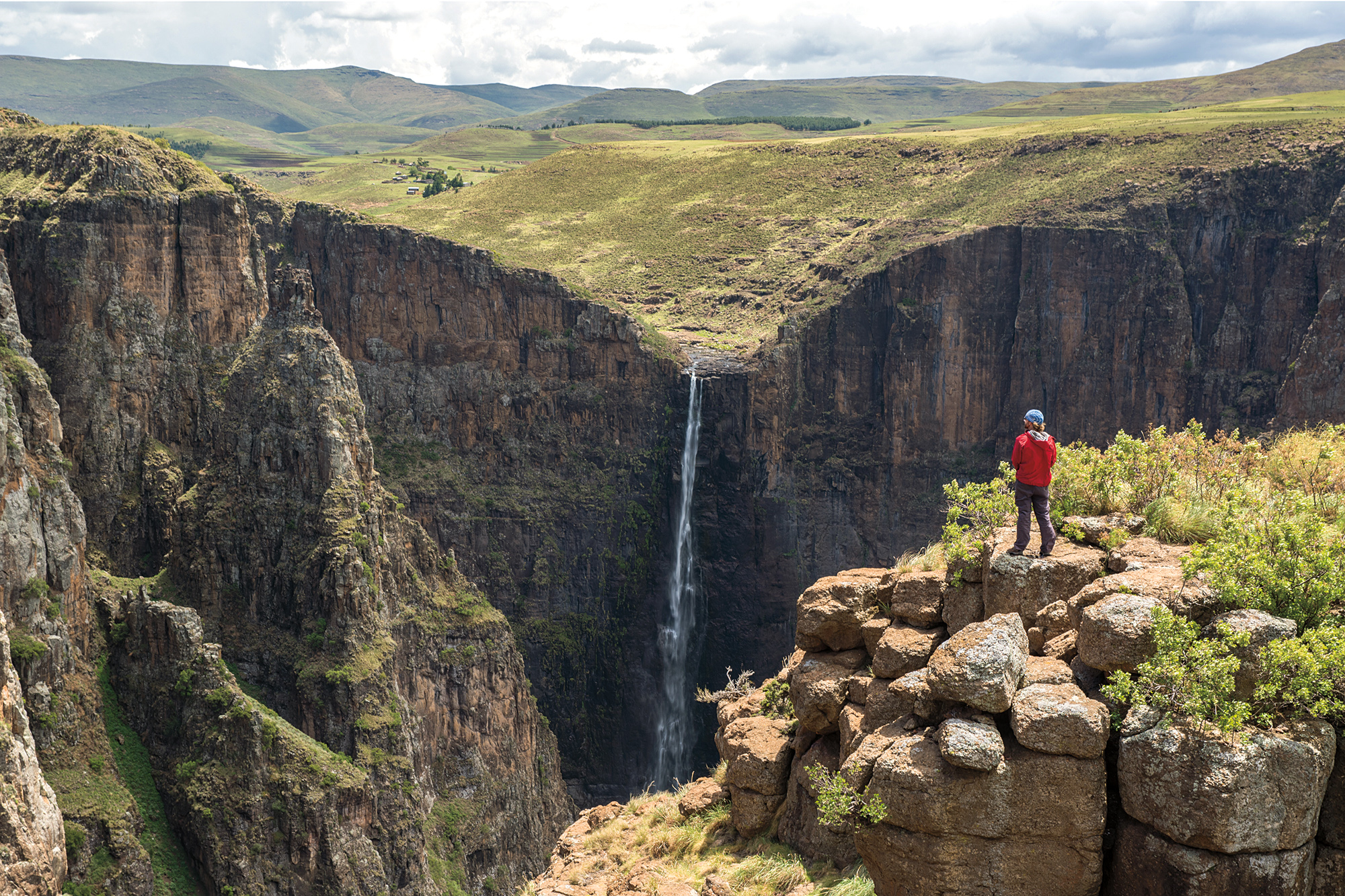 There is a tranquil three-hour return hike along the Maletsunyane River to the source of the falls, where the crushing stream of water is awe-inspiring. If you opt to go on the heart-pumping climb to the bottom basin, a Garden of Eden awaits. Swim in the refreshingly cool pools and get face to face with the local mountain goats.

Leaving Semonkong, if you follow the A5 Highway, there are many side roads to explore in search of a wild camp; I located a perch where no one could see the vehicle from the pavement. A few friendly locals walked by on their return home from the fields—you’ll find Lesotho is about as safe as it gets for tourists looking for off-pavement adventure. 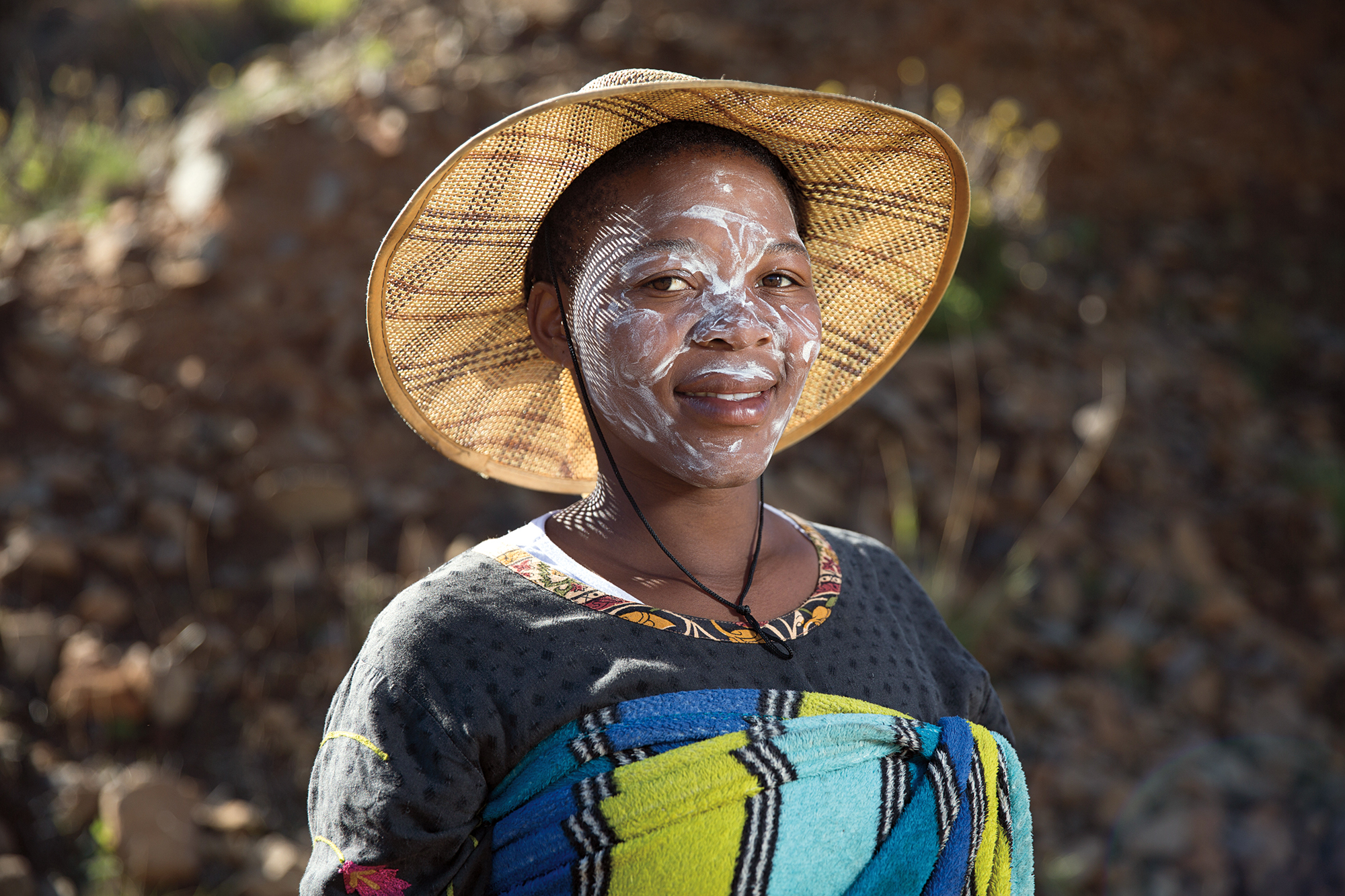 I exited the country at the Qacha’s Nek Border Post and drove to Khotso Lodge and Horse Trails in Underberg, South Africa, for a three-day horse trek into the Maloti Mountains and Sehlabathebe National Park. Khotso is one of the only companies to offer this trek, and travellers come from all over the world to venture unencumbered into the vast wilds of the region. Sehlabathebe National Park is small in size but not in stature, with an inviting biological diversity of grasslands and wildflowers, unique rock dwellings, waterfalls, and pools. Each ridge gives way to yet another picturesque valley, and the silence of the scene, which seems to stretch on forever, is rejuvenating.

After crossing back into Lesotho at the Bushman’s Nek Border Post, Khotso’s expert local guides led our group on the experience of a lifetime. We encountered everything from waist-high river crossings to expansive prairies to a seemingly unforgiving mountainous terrain with sheer 500-foot drops looming on all sides. From the backs of our perspiring horses, we tackled peak after peak, stopping to remove the saddle through the steep bits. As trails of rock crumbled behind us, falling to the valley below, we were left with the sensation of being truly alive.

Khotso Lodge in Underberg is a good jumping-off point for exploring. The Mkhomazi Wilderness Area is nearby with the well-known Rhino Peak, an 11.2-mile grind with multiple river crossings, a steep climb up Mashai Pass, and the chance to camp overnight in a large cave-dwelling.

I departed from Garden Castle Nature Reserve and completed the mostly flat hike to my home for the night, Pillar Cave. The cave opening offers a stunning 190-degree view of the Mlambonja River Valley, the pass, and Rhino Peak. The view is never the same, as the mountain ranges disappear and reappear with the passing of each patch of fog.

The summit to Rhino Peak is considered dangerous because of its steepness, lack of trail markings, and cautionary weather. After the challenging hike, being greeted by a Basotho shepherd at the top, and seeing the rhino-shaped horn, a dramatic freestanding peak appeared through the fog, inspiring a deep emotional connection to the land and feeling of accomplishment. Lesotho is also a place rushing rivers and gigantic drivable passes, including the renowned Sani Pass along the eastern border— the 1,332-meter climb along a series of tight switchbacks zigzagging up the vast Drakensberg escarpment provides quite a thrill. 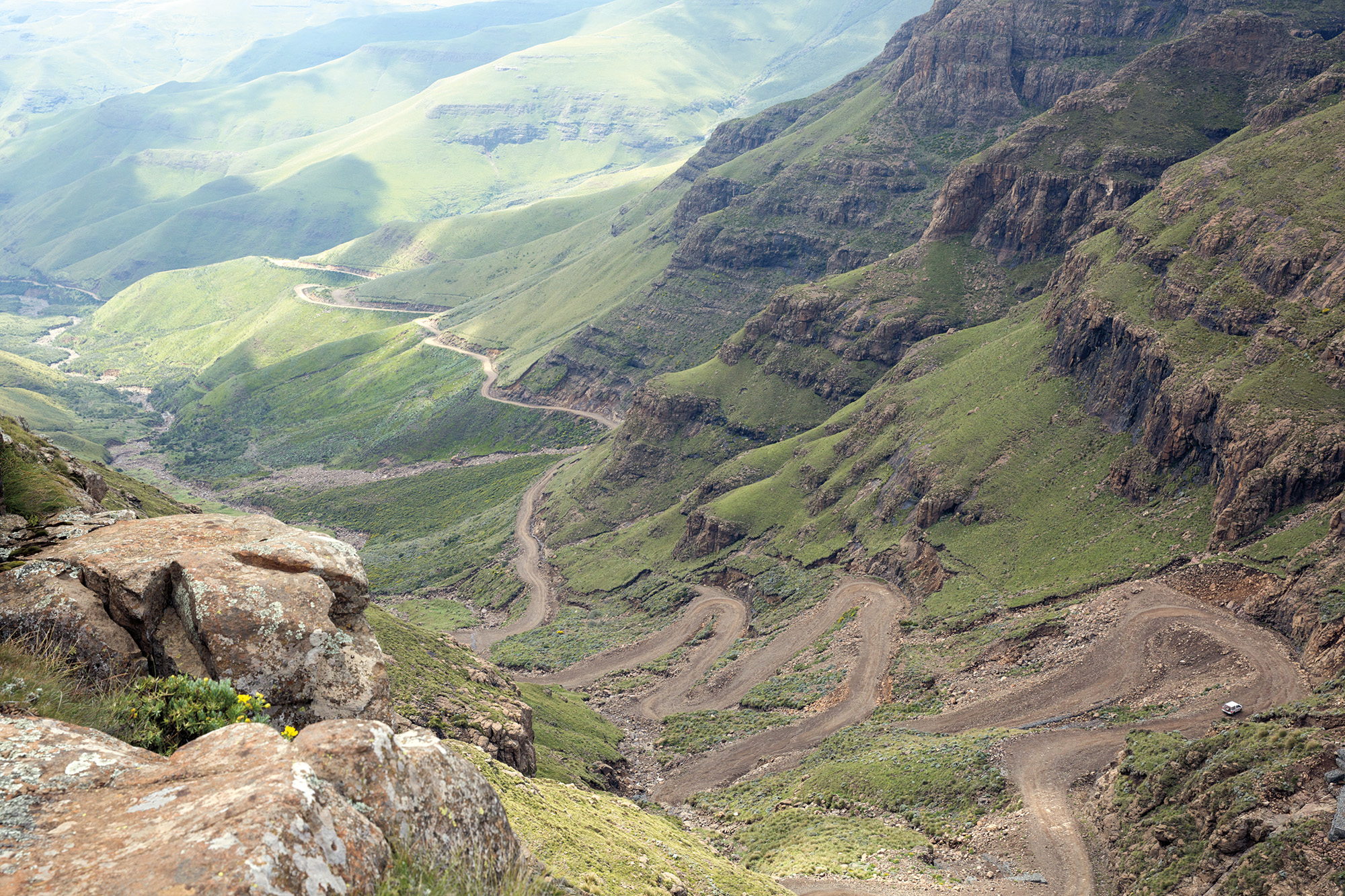 My journey up the Sani Pass went smoothly, thanks to the accompaniment of sunny skies and few vehicles crowding the narrow dirt roads. At the top, there is the sprawling valley on one side, and flat rocky terrain leading into Lesotho on the other. I got my passport stamped and headed toward the Sani Pass Lodge. Climate conditions change on a dime up here, and there were wind-warning signs posted throughout the lodge’s parking lot. Basotho handicrafts are available at nearby shops, and hiking opportunities lay in wait around the highlands. Warming up in the cozy atmosphere of the lodge’s restaurant, which claims to be the highest pub in Africa at 2,874 meters, makes for a perfect end to the day. 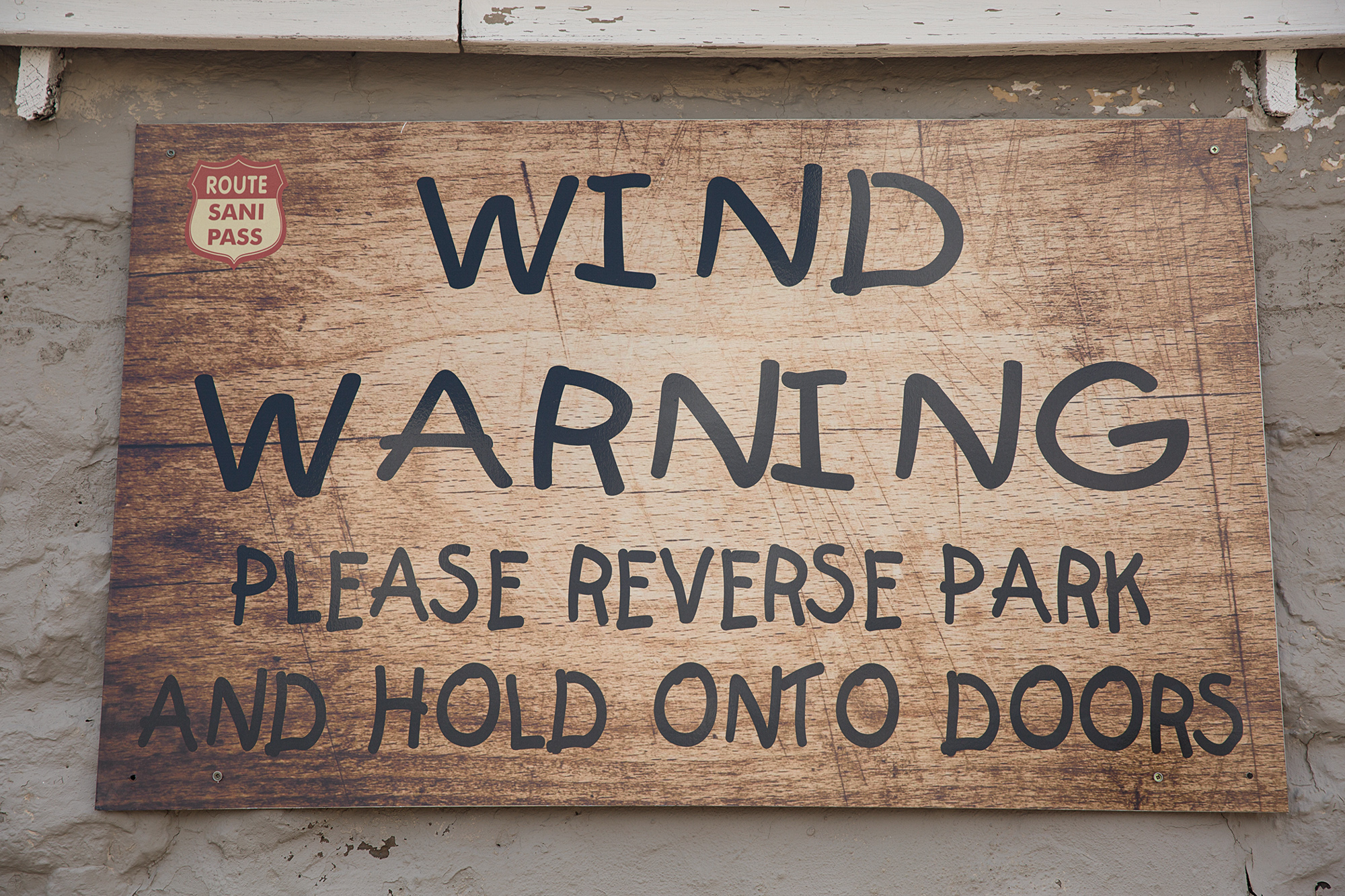 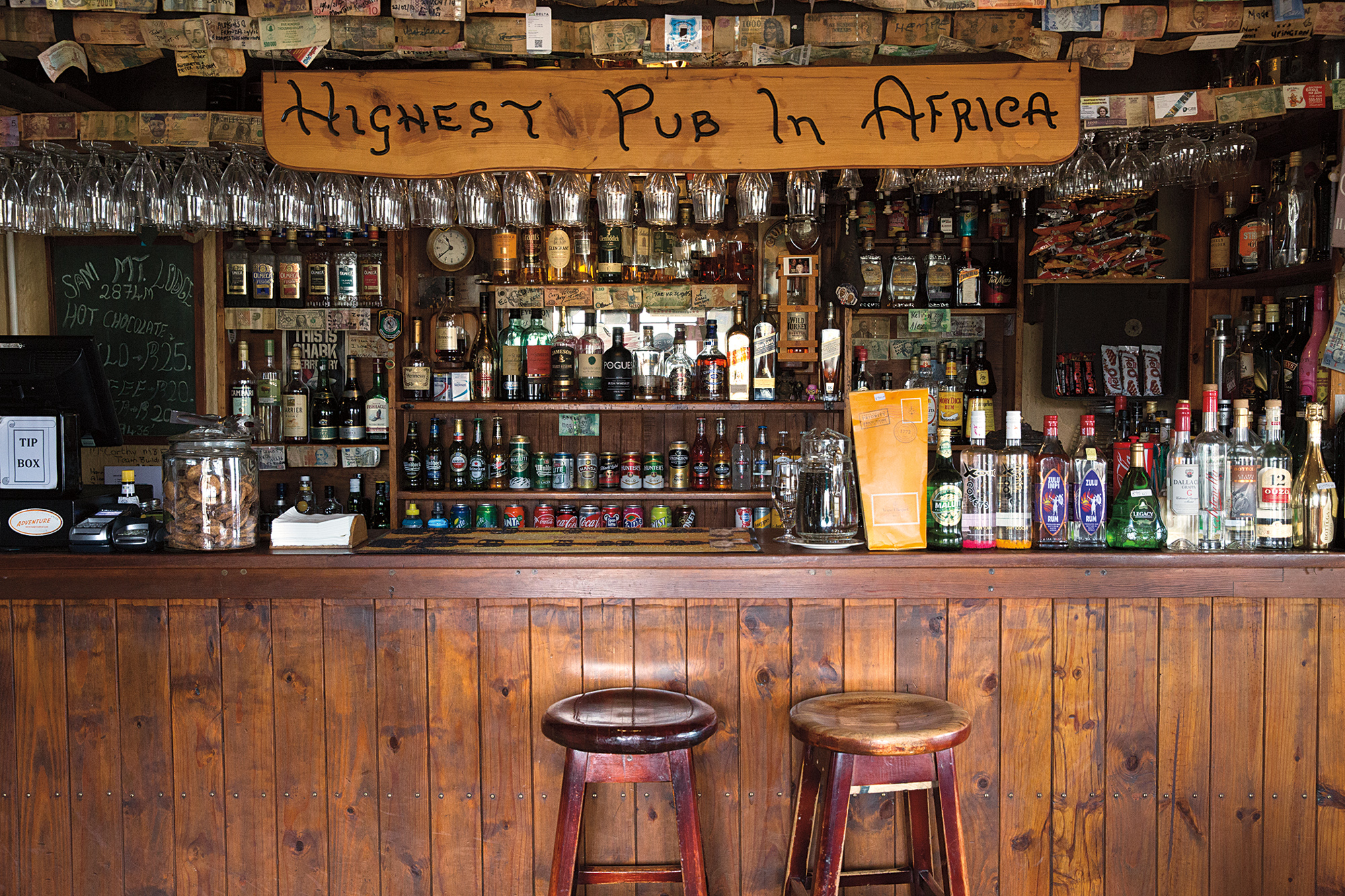 During this journey, I drove straight through the center of Lesotho to reach the other side, then explored the eastern border region to my heart’s content. As I sat by the fire, looking out onto Sani Pass, I was reminded of humanity’s collective ancestors who carved a life out of this rugged land, and of the Basotho, who still have the pleasure of calling this special part of the world home.

Lesotho offers an impressive array of ways to explore its ancient wonders. Adventure activities abound, as do a proliferation of relaxing pursuits. From skiing, abseiling, and paragliding to world-class fishing, boating, and birdwatching, you will be enticed to return time and again. The secrets of this little Kingdom in the Sky reveal themselves more with each visit.