Overlanding During a Pandemic

The novel coronavirus has swept across the world at exponential rates, infecting over half a million people already. In Denver, Colorado, and across the US, shelter-at-home orders are going into effect weekly, in a dramatic effort to slow the rate of infection. As someone who traveled extensively in my RV, I found myself wondering how the overlanders and vehicle dwellers of the world are being affected by this unprecedented situation, especially those caught in other countries as borders are rapidly locked down.

“Within hours, foreigners became enemies here [in Cafayate, Argentina,] as a lot of people are afraid that we are bringing death,” reads Marcus’s (@slowtravel4x4) Instagram post. “It started with…some vendors refusing to sell food and water to foreigners…the police started hunting foreigners to tell us we are not allowed to stay, but we haven’t been allowed to travel.” I reached out to Marcus over WhatsApp to learn more about his current situation and what he planned to do. 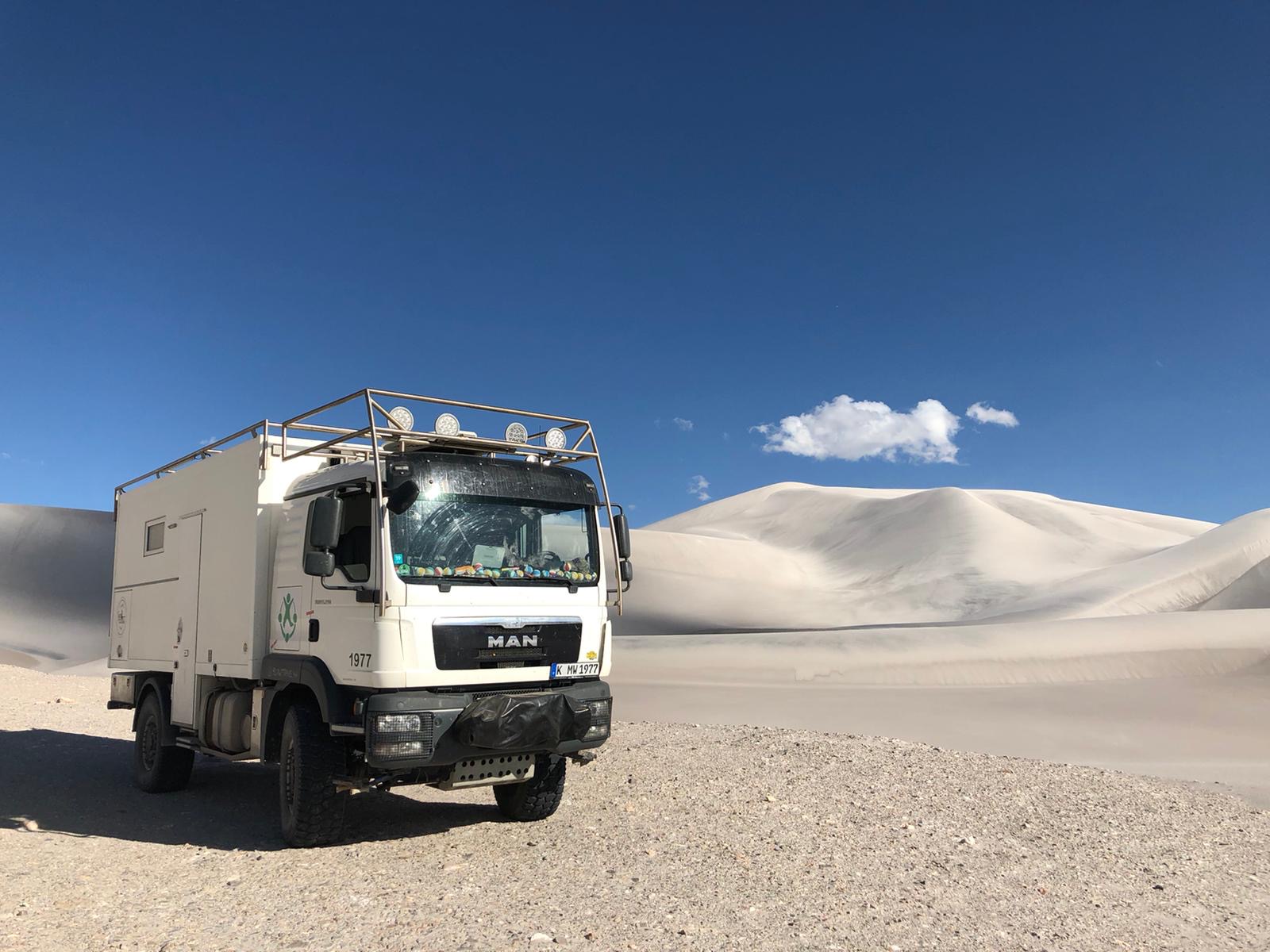 Marcus, a retired banker from Cologne, Germany, has been traveling in South America for the last two and a half years, most recently in a modified MAN TGM 13.290. He’d been off-roading in the Andes and, upon returning to town, was shocked to see how quickly panic surrounding the pandemic had spread.

Signs put up in all of the local stores declared that they were no longer selling to tourists. What ensued was 48 hours of confrontations with frightened locals and police, who insisted on escorting Marcus and his group of travelers outside city limits, but offering no long-term solution for where they should go. 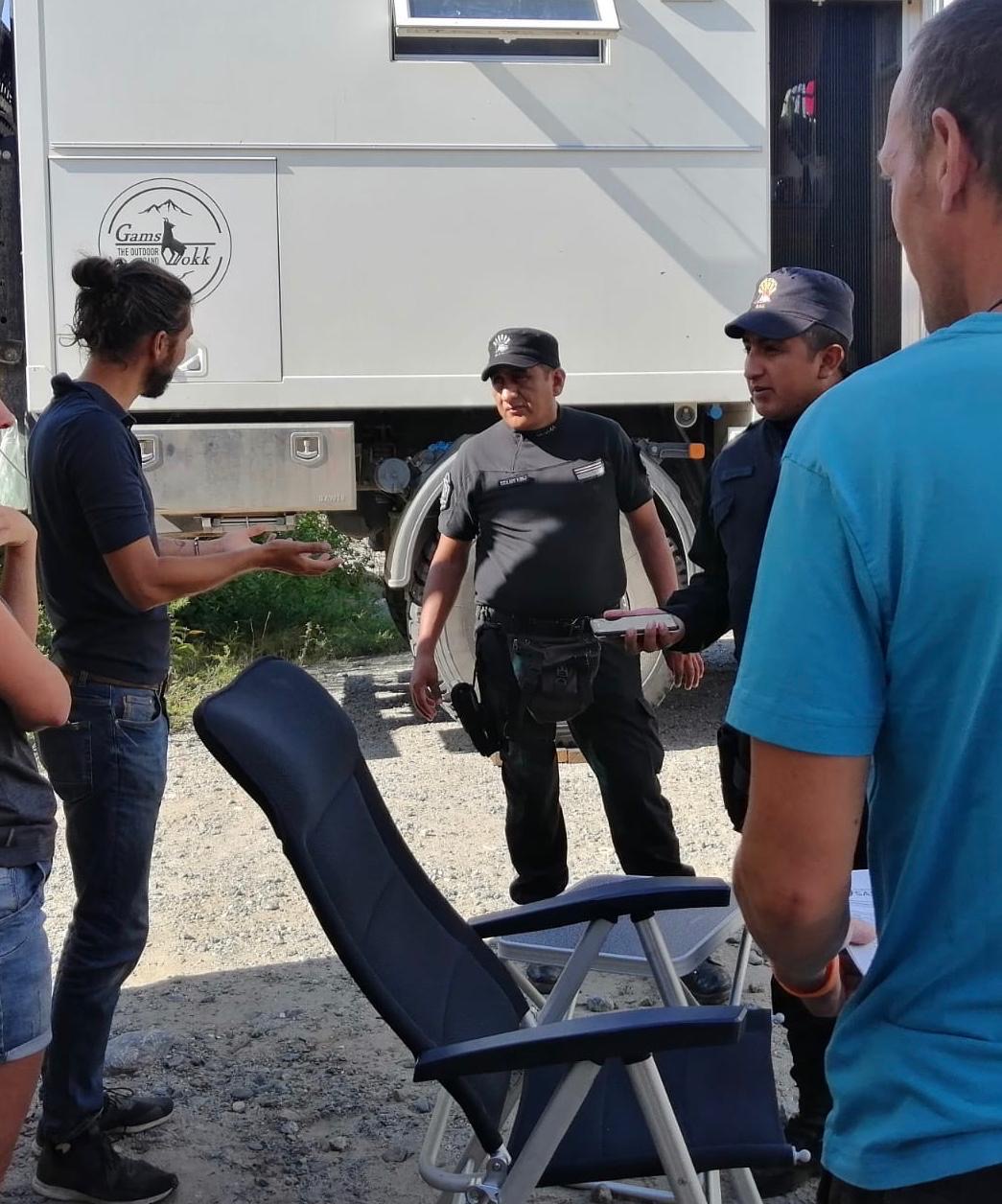 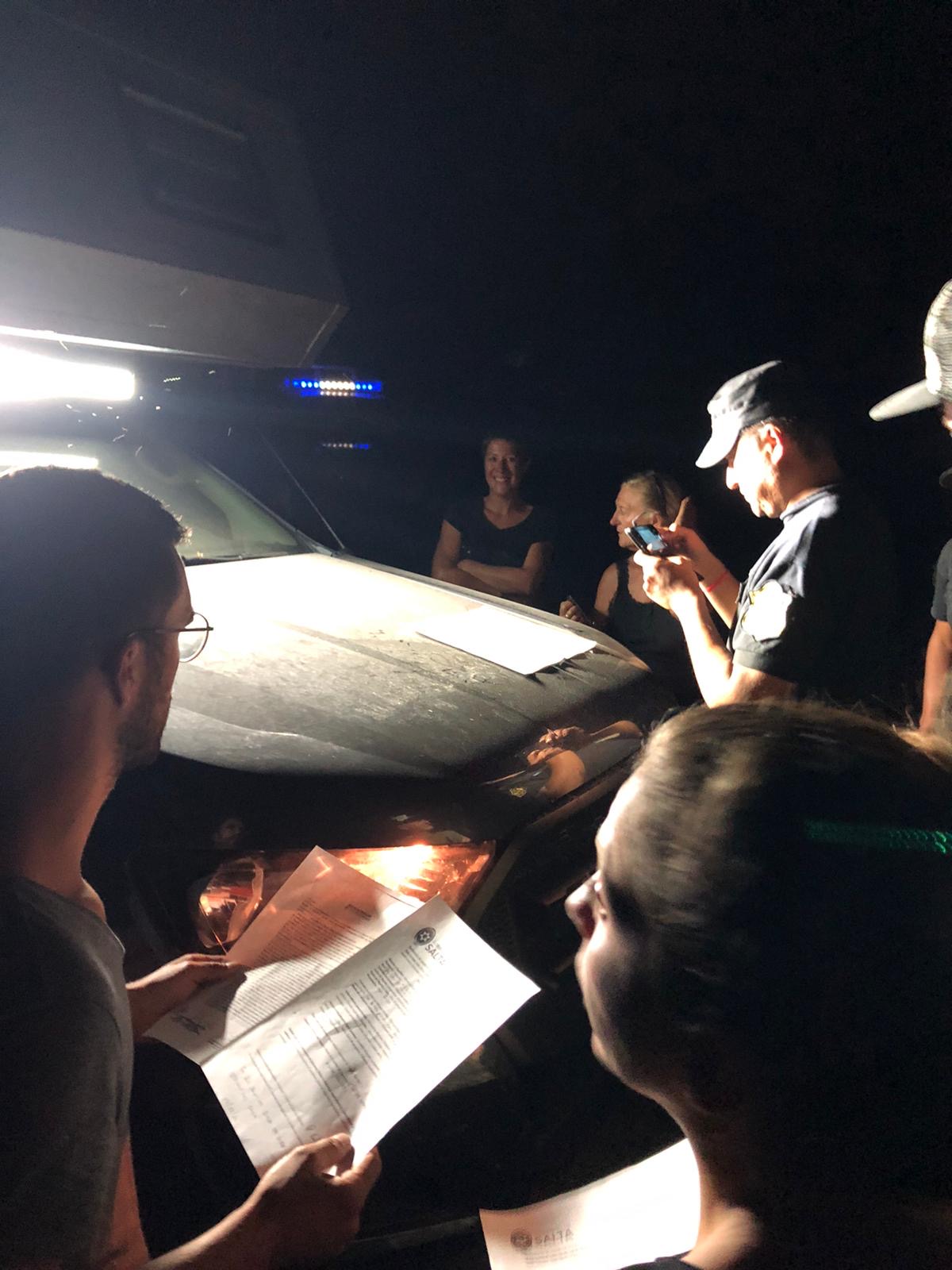 Eventually, they were able to negotiate an agreement to park at a local campground, despite a lack of infrastructure (the campground was already closed for the season). From this safe and stationary location, they could figure out their next step (ultimately, to stay put). And what was initially a harrowing experience improved. Marcus’s group was able to pay locals to deliver food to them at the campground, in an effort to maintain isolation (while simultaneously providing some locals with work). “The family bringing us groceries is happy to earn some money as most people don’t have an income right now,” Marcus said.

Due to the general shutdown of the country, many rural Argentinians have suddenly found themselves without income (especially the regions that rely heavily on tourism). Although the German embassy recommended that Marcus return to Germany, he feels that his odds are better in rural Argentina, given the situation in Europe. 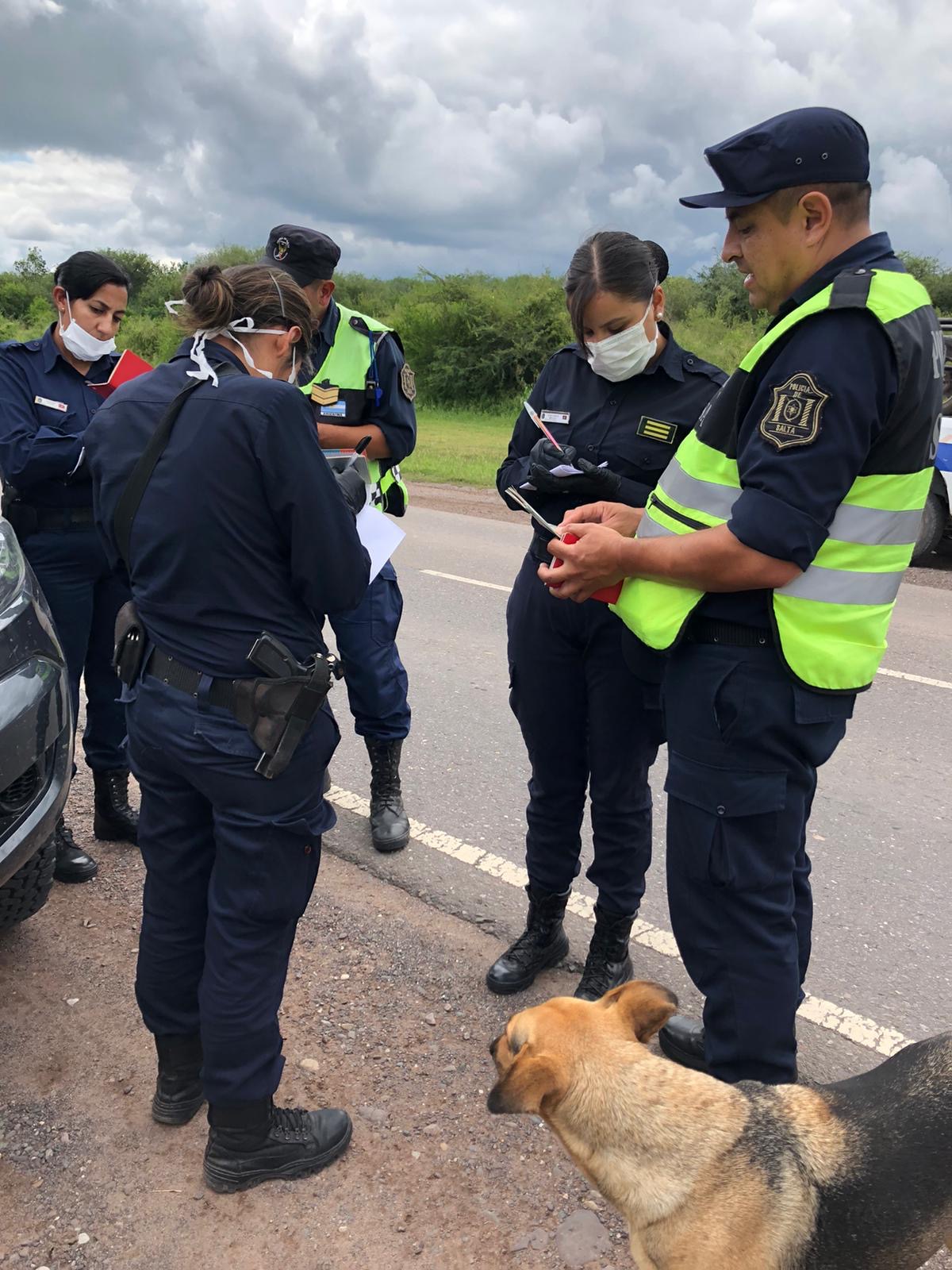 Two other travelers in a similar situation are Mike and Anne Howard, the writers behind Ultimate Journeys For Two and www.honeytrek.com. These US citizens were initially en route to Sicily for a speaking engagement when their gig was canceled. They are currently riding out the pandemic in a campervan in Poland.

Upon arriving in Germany a few weeks ago, Covid-19 was still mostly confined to Italy, so without any indication of how crazy things were going to become in the rest of Europe, they picked up a campervan from Indie Campers to make the best of their newfound free time. Mike and Anne spent two days in Germany before heading to Poland and then the Czech Republic. Mike recounted the experience. “While researching places to celebrate our wedding anniversary, I found an amazing, vegan-friendly restaurant in the northern Czech Republic. So we rolled there for a little cross-border adventure, and during the meal, the waiter’s like, ‘Hey, I heard whispers that they might close down the border soon.”

Mike and Anne headed back to Poland, and sure enough, the border shut behind them. Within a few days, the EU closed all internal and external borders, effectively locking them in Poland for the foreseeable future. “If you were German, you could get home to Germany, but if you were a traveler, exploring was no longer a good enough reason to leave. Everything was on lockdown,” said Anne.

Luckily, Indie Campers told the Howards to keep the campervan as long as necessary to ensure their well-being. And having the camper is a necessity as hotels, AirBnbs, and RV parks are closed throughout the country, Anne reflected. “[With the camper] we have everything we need to be independent and self-isolate. Even though restaurants aren’t open, we can cook our own meals. And no matter if the hotels are closed, we still have a place to stay.”

The challenges to their current situation are cold weather (many nights below freezing), and the fact that their campervan doesn’t have solar (they have to drive daily to charge the camper batteries). But Mike and Anne are making the best of things, cruising the backroads, and keeping themselves isolated in nature. “It’s super eerie because everywhere is a ghost town. Beautiful medieval market squares that would normally be booming with tourists and locals are totally vacant. It’s surreal to see Europe this way, ” said Mike.

Mike and Anne’s experience is not too dissimilar from Marcus’ in that they are apprehensive about returning to their home country, knowing that the cases of Covid-19 are much higher in the States, and the process of reentry is likely unfavorable. According to Mike, locals in Poland are taking social distancing very seriously, and the general experience is that they are, in fact, safer in their campervan in Poland. When I asked about their plans, Mike mentioned that he researched return tickets to the US, but at $2500+ per person, it just didn’t make sense. Given the options of “sitting in their camper in Austin, Texas, versus sitting in a camper here in Poland,” Mike and Anne decided to stay put (they also need to return their rental van to Indie Campers in Germany, once the borders reopen). 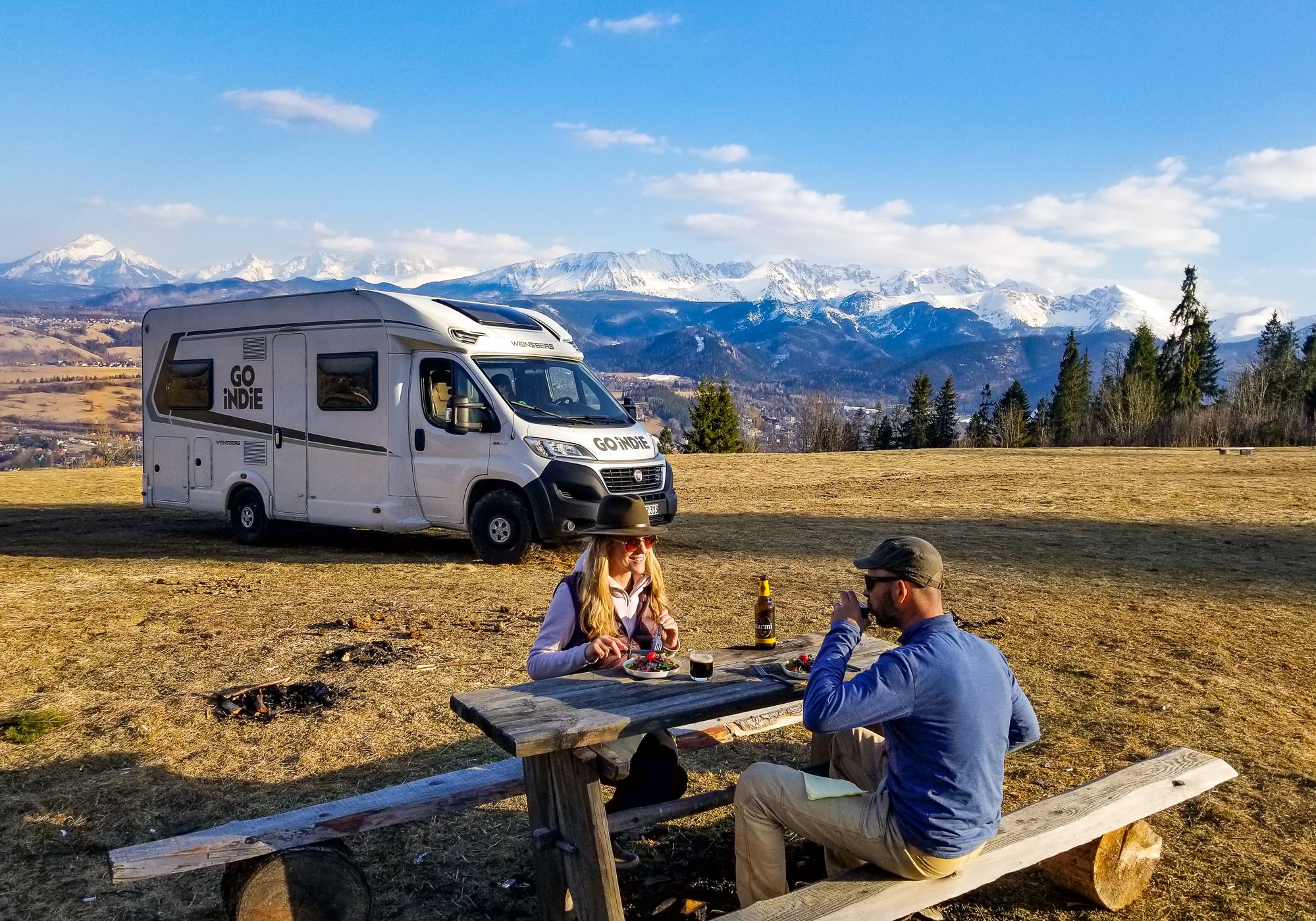 Here in the United States, as in much of the rest of the world, travel is currently discouraged to avoid spreading the virus, especially to small communities with limited medical facilities. For those travelers abroad, although there is uncertainty concerning what will come in the next days and weeks, the current best course of action is to safely find solitude and stay put, wherever they may find themselves.

For Nick Maddock (@nickmaddockglobal), this was easy. “My engine actually blew up on me today—I think it threw a rod, so we’re having a fun day,” he jokingly said. Nick is 28 years old and has been traveling since January of 2018. He’s currently in Bulgaria. Three weeks ago, Nick and his partner were in Georgia when they began to worry about the spread of Covid-19. They raced back to Bulgaria, arriving the night before the borders closed. They planned on waiting it out, but about three days after getting back to Bulgaria, Nick’s boyfriend decided to return to the States while Nick chose to stay. I asked Nick to elaborate on his decision. 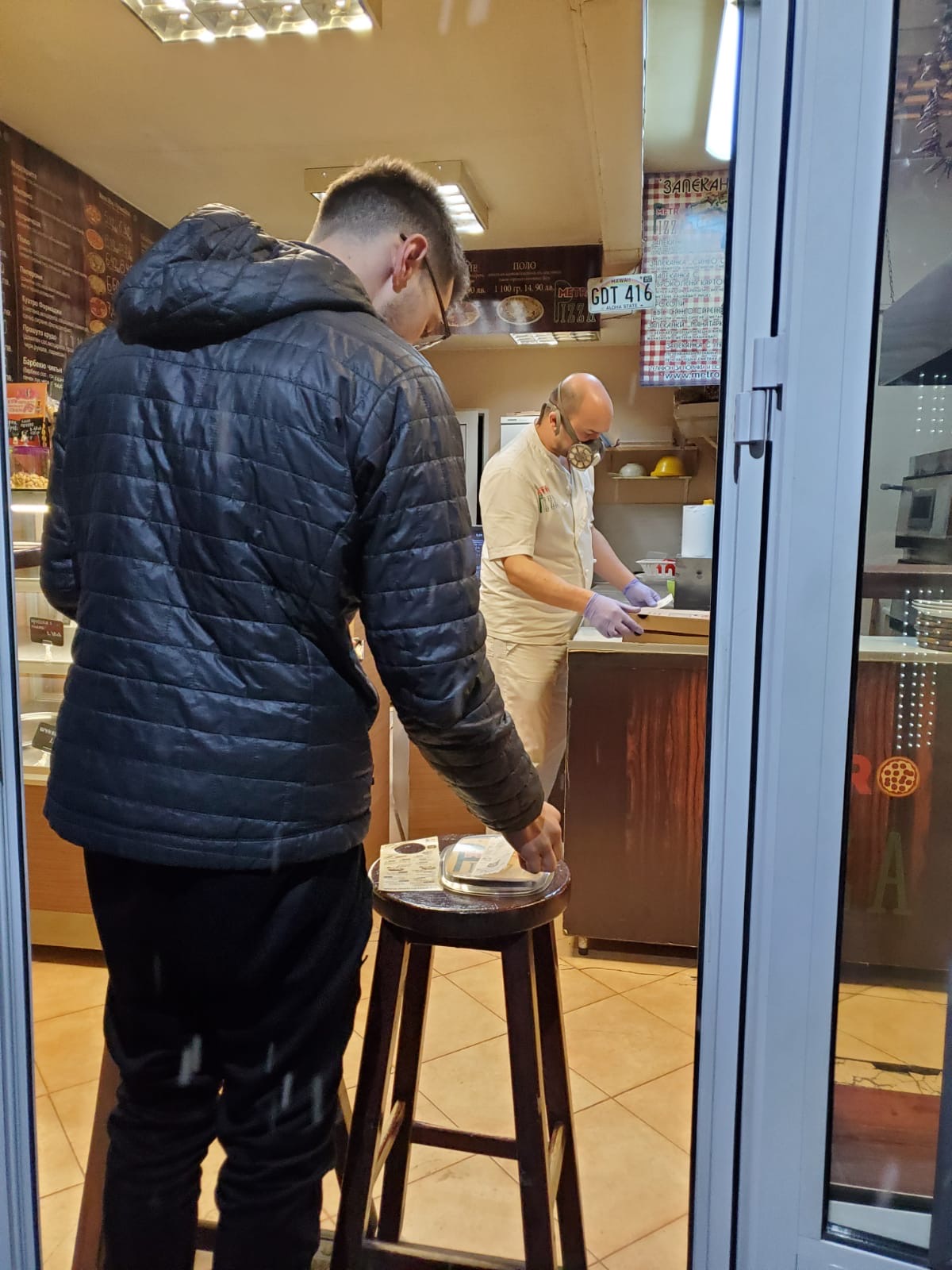 “The kind of things that were weighing on me was that over here, there are a lot [fewer] cases, and it’s not [expanding] as quickly. Over here, I have health insurance through my travel insurance policy; in America, I don’t, I’m not covered.” Nick continued. “At the house that I would go to [in the US], it’s my Mom’s house, and she’s 63 years old and has an immune deficiency. And my 93-year-old grandma lives there as well, so I would hate going there, risking bringing the virus to them.” The Bulgarian government has been taking the threat of Covid-19 seriously, which has thrown Nick some curveballs. He’s currently in need of a mechanic, but they are all closed. And even if he does find someone to work on his vehicle, hotels and short-term rentals are shuttered by government mandate, so he is living with uncertainty, just like everyone else.

Although these international travelers are facing some unique challenges, everyone I interviewed is optimistic and has shown great resourcefulness. And perhaps that is the most profound realization that I’ve taken away from these four travelers’ experiences. Overlanders, van-dwellers, and nomads thrive in challenging situations. It’s not an exaggeration to point out that every time we hit the road, we embrace uncertainty, and for that, we are better prepared. Stay safe out there. 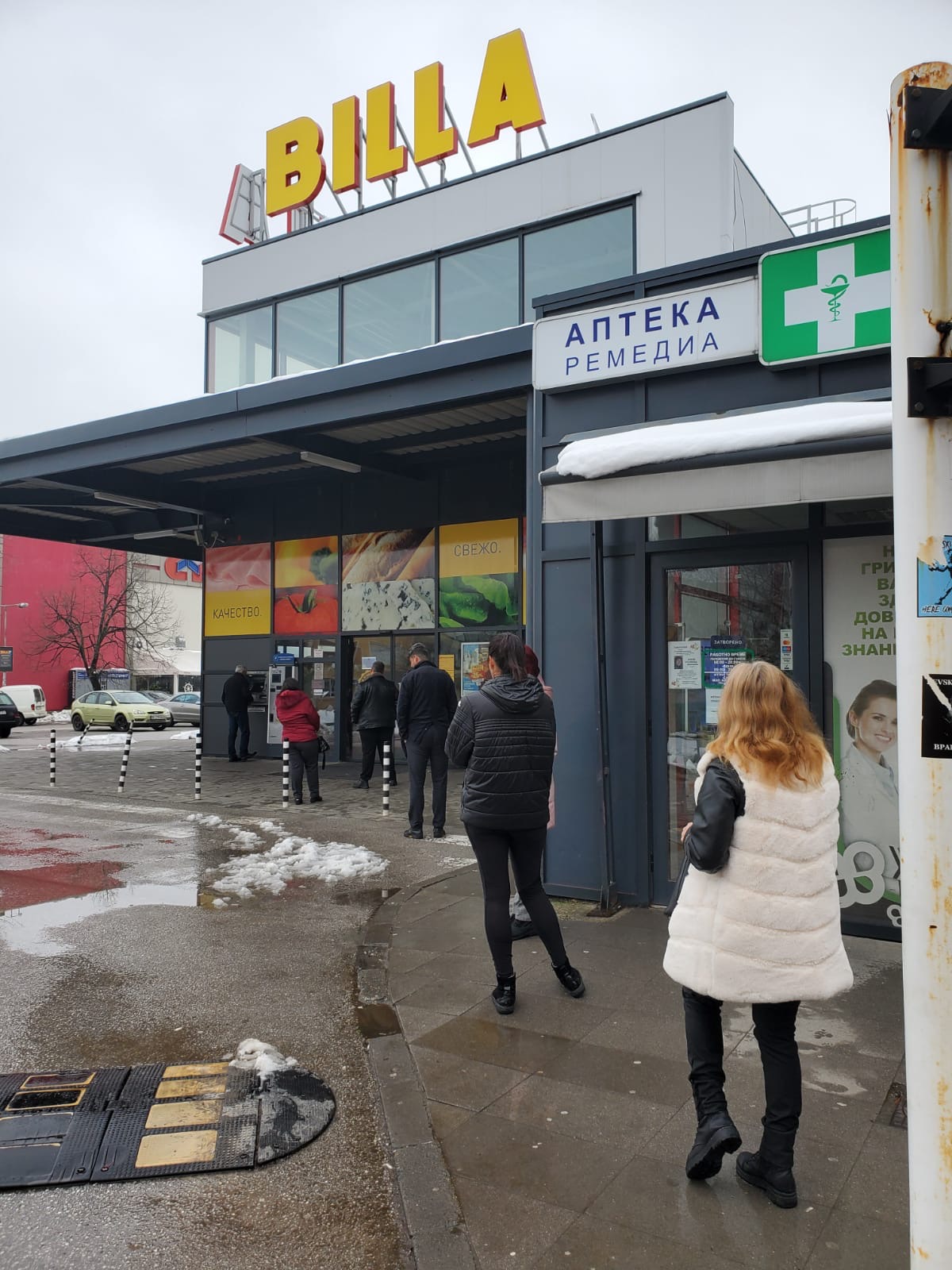