A week ago, I arrived in Rapid City, South Dakota. Michelle Lamphere—author ofThe Butterfly Route, organizer ofBlack Hills Film Moto Festival, and part-founder ofRev Sisters—graciously picked me up at the airport. Michelle owns the Chalet Motel in Custer and had invited me to spend almost three weeks there on a self-imposed writer’s retreat, working on my book project.

On our forty-minute drive back to the motel, I asked Michelle about a recent trip she’d taken to Pakistan, calledChickistan. She told me she’d had an incredible time riding there with nine other females. I thought her impressions of the country and its riding scene would make an enlightening interview.

Was this an organized trip with a local tour company or an American company?

Chickistan is a women-only tour offered by Moin Khan ofadifferentagenda.comin Pakistan. Moin lived in the US for several years and now lives and operates his company in Pakistan, offering a variety of tours for men and women. He does a fantastic job of customizing the tour for his clients. 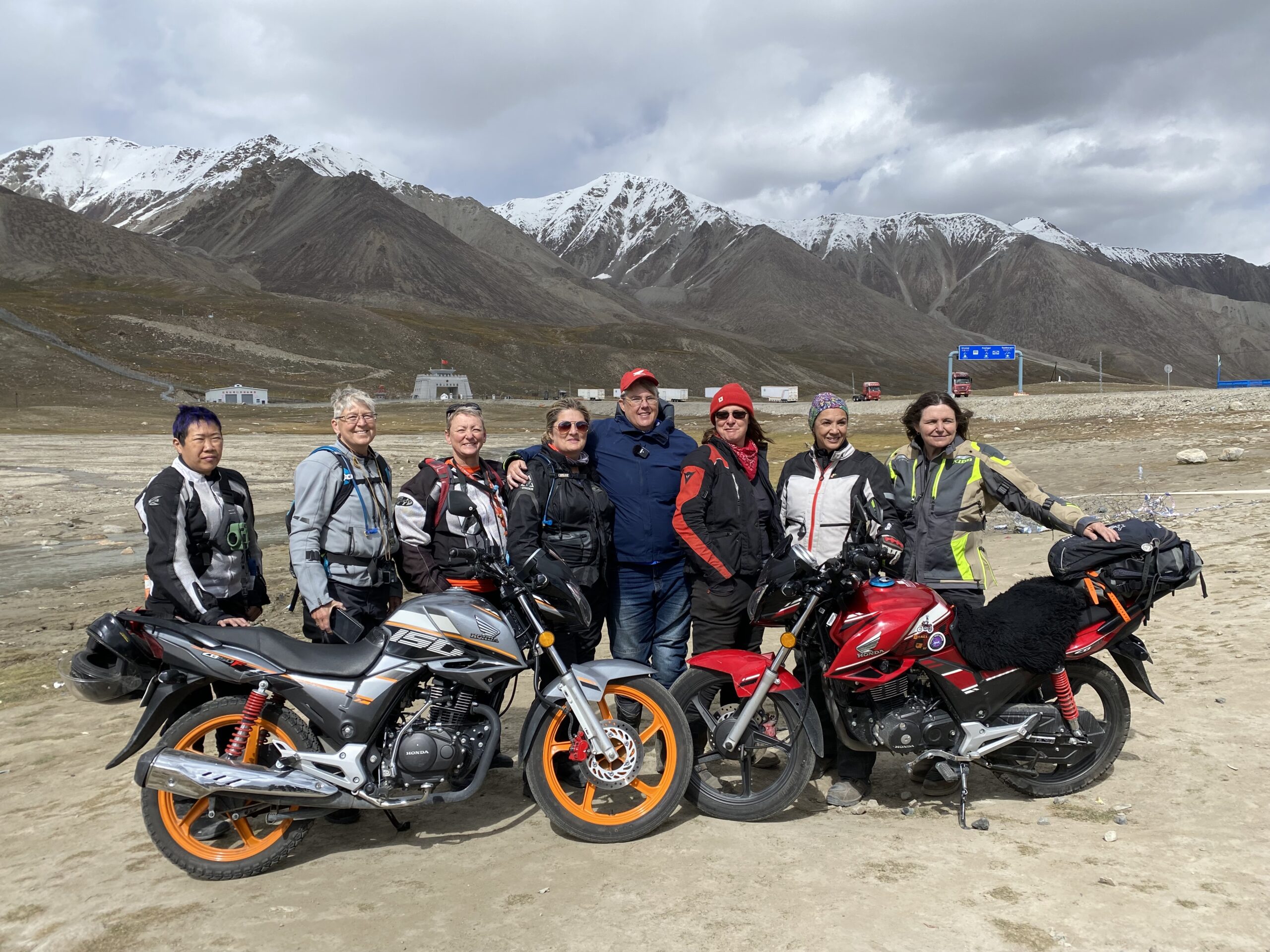 How did Chickistan come about?

Liza Miller, host of theMotorcycles and Misfitspodcast and founder of theRe-Cycle Garage, went to Pakistan in 2015 as a guest of Moin’s, and the two decided to work together to create a specific tour for women. The first Chickistan tour was held in 2017 and hosted 12 women.

At the request of the participants in 2017 and again this year, Moin incorporated some special sites on the route. He coordinated a visit to a woman-owned-and-staffed furniture-making and homebuilding business. We were able to visit some local schools, including a hostel for young women attending university courses online. A rug-making factory stop was added so that we could support the local women weavers. 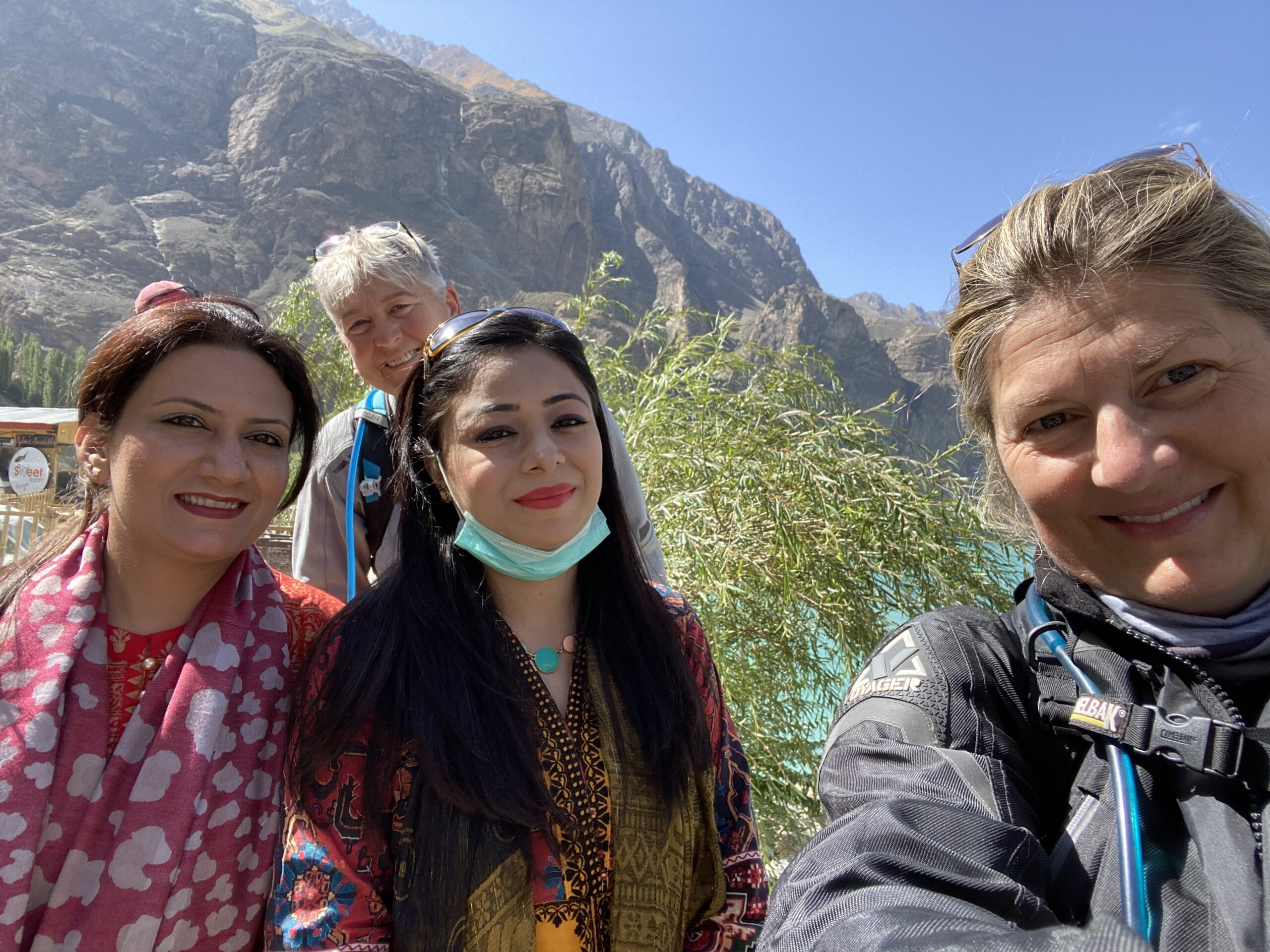 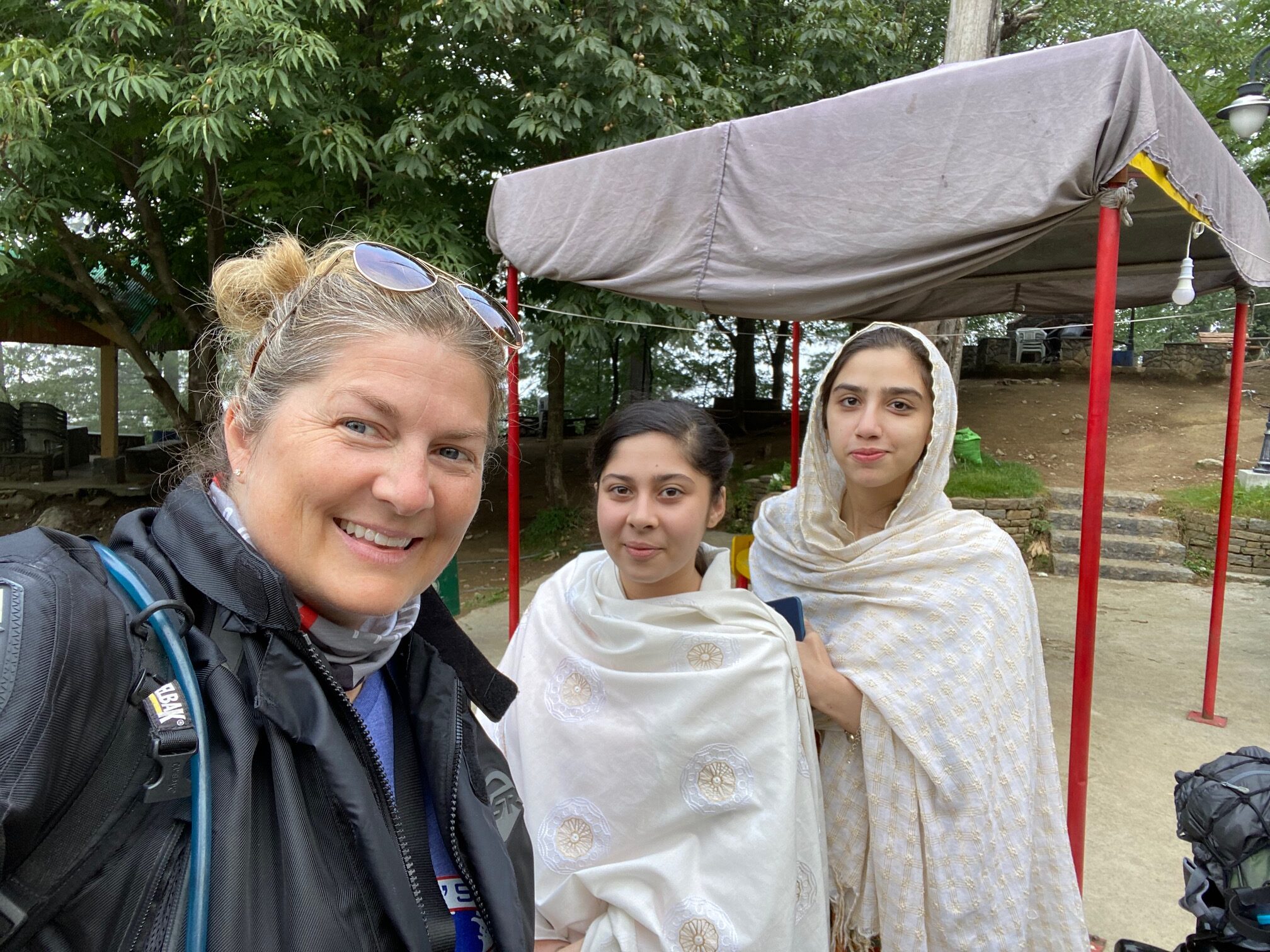 What made you decide to go?

I met Liza through Women Riders World Relay(WRWR) when we both joined the seven-member administrative team that created the relay. In 2018, she invited me to the 2019 Chickistan tour, and I signed up immediately. But with the workload we were both facing in our personal lives, and with supporting WRWR, she asked Moin to postpone the tour until 2020. And well, we know how 2020 turned out. So the tour was pushed to 2021.

How long was the trip in weeks?

We rode for two weeks. This route was different than the first Chickistan tour, which was also a two-week tour.

Surprisingly, or perhaps not for people who have ridden internationally, we didn’t cover that many miles. We rode approximately 1,300 miles.

How many people were on the trip, and were they all female?

Nine American women participated in the tour. Moin personally led the rides each day. We were accompanied by his crew—a team of four—as well as a friend of his. We were also supported by a three-man team from Atlas Honda, the manufacturer of the Honda CB150F motorcycles we rode. 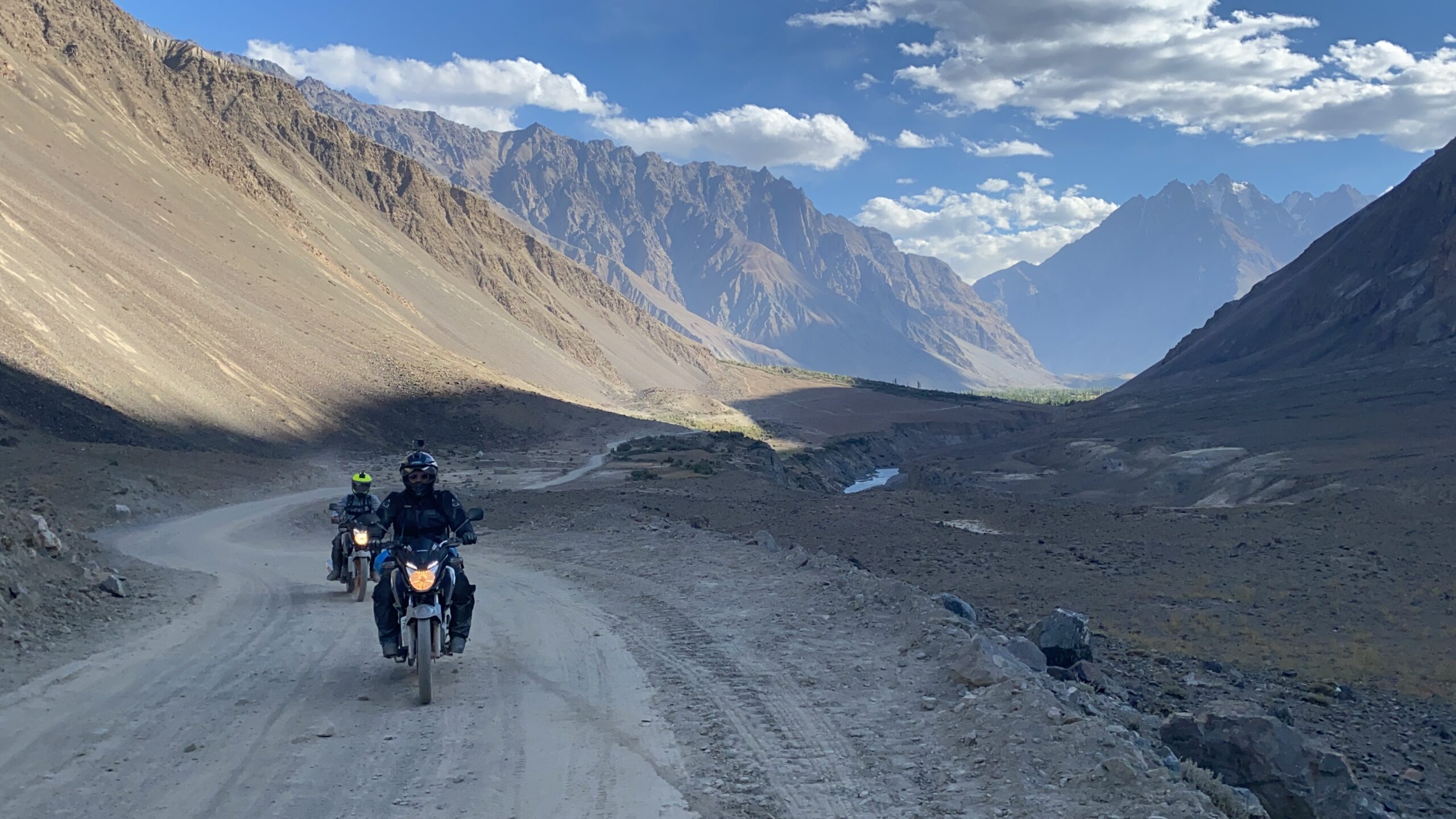 How close did you get to Afghanistan? How did that feel?

For the majority of the two weeks—perhaps 10 days—we were within 50 miles of Afghanistan at all times. Near the end of the trip, we spent time in a village just six miles from the Afghani border.

With the situation changing so rapidly just before we went to Pakistan, I wasn’t sure what to expect. I thought we might see some refugees in some of the cities we passed through, but we didn’t. It appeared to be life as normal in the places we visited.

Where, if ever, did you feel unsafe?

I never felt unsafe. In fact, quite the opposite. While I’ve traveled to more than 70 countries, I cannot recall ever having visited a country where the locals went [so] out of their way to stop and welcome us to their country. Crowds often gathered around us at fuel and photo stops. Cars would follow us on the roads and match our pace so they could roll down their windows and wave or shout “Welcome to Pakistan!” in perfect English. 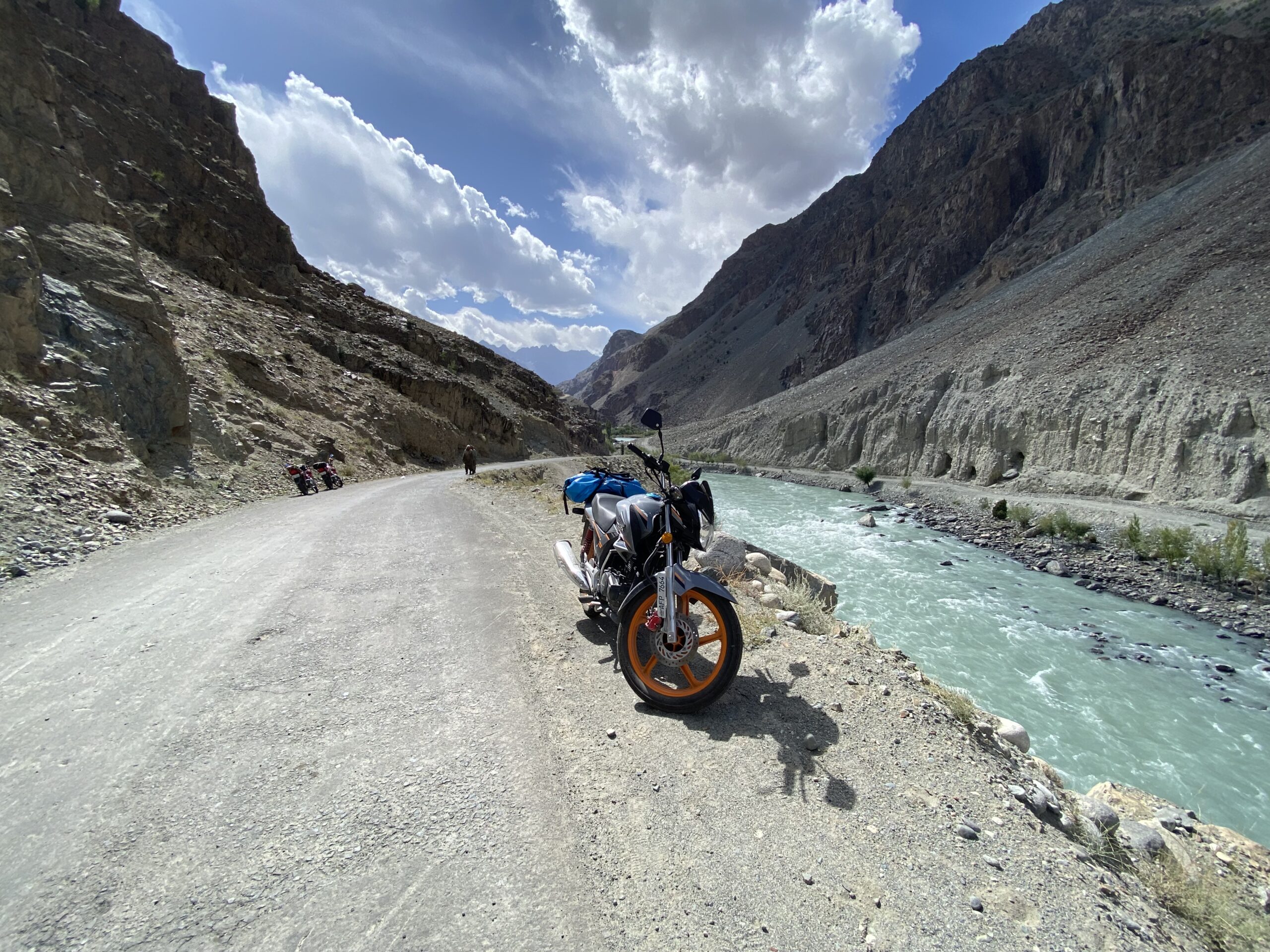 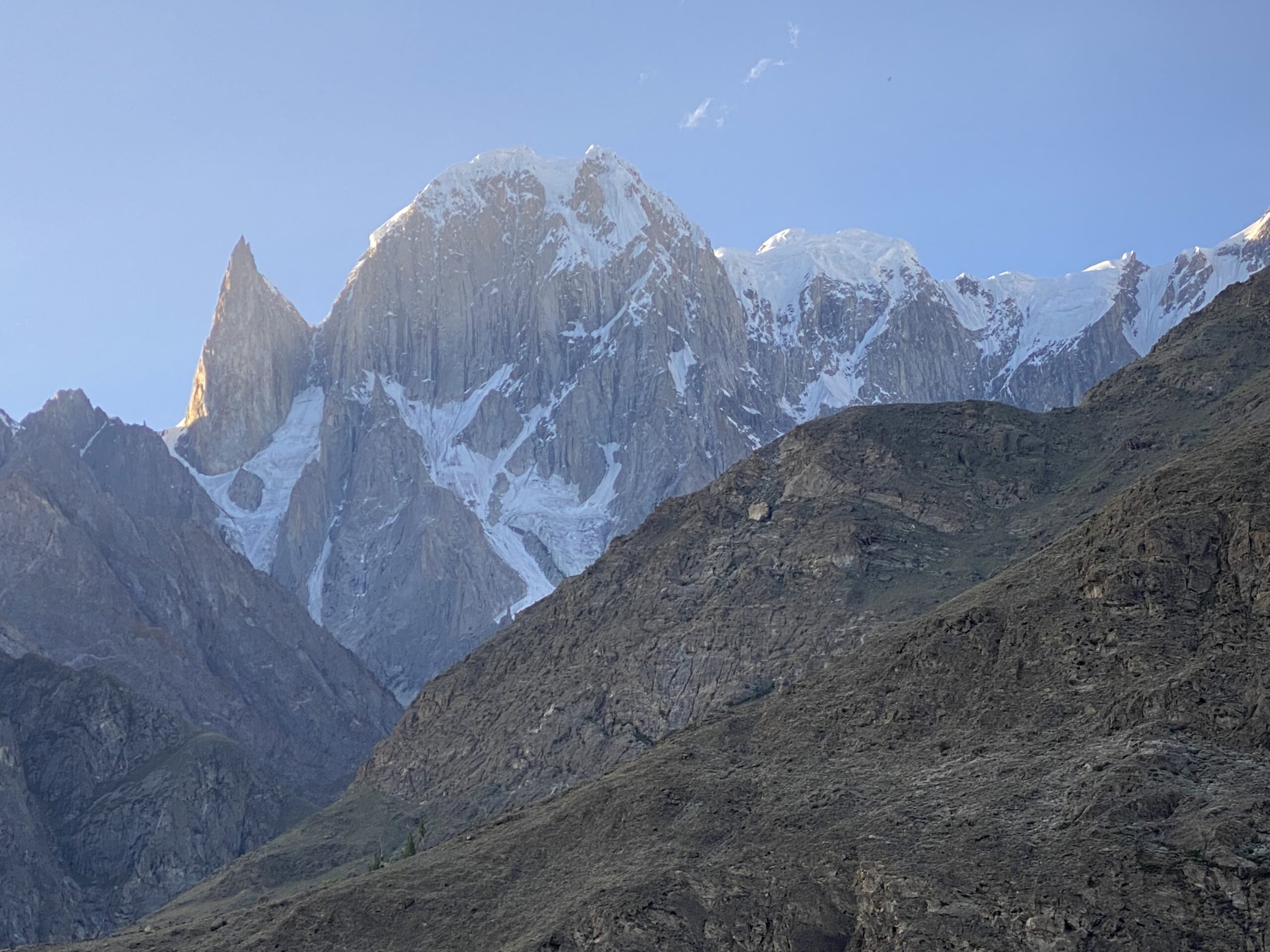 How did local women react to seeing you on bikes?

As sometimes happens when you’re completely covered in protective gear, we were at times mistaken for men. When we removed our helmets or started talking, we could see locals doing double-takes. Women seemed interested in what we were doing and would smile.

How many women ride there?

Other than in Islamabad, we didn’t see many women riding except as pillions. I understand it’s not very common in rural areas for women to ride. If a family can afford a vehicle at all, oftentimes, they may only have one motorcycle as the transport for the entire family. So the man of the family will usually ride, and other family members are pillions.

Our group was lucky enough to meet withZenith Irfanwhen we arrived in Islamabad. Zenith is known in Pakistan as “Motorcycle Girl.” She had a movie by that name made about her becoming the first Pakistani woman to ride across her country on a motorcycle. Zenith challenged some social norms when she made that journey in 2015 and continues to inspire the women of Pakistan. 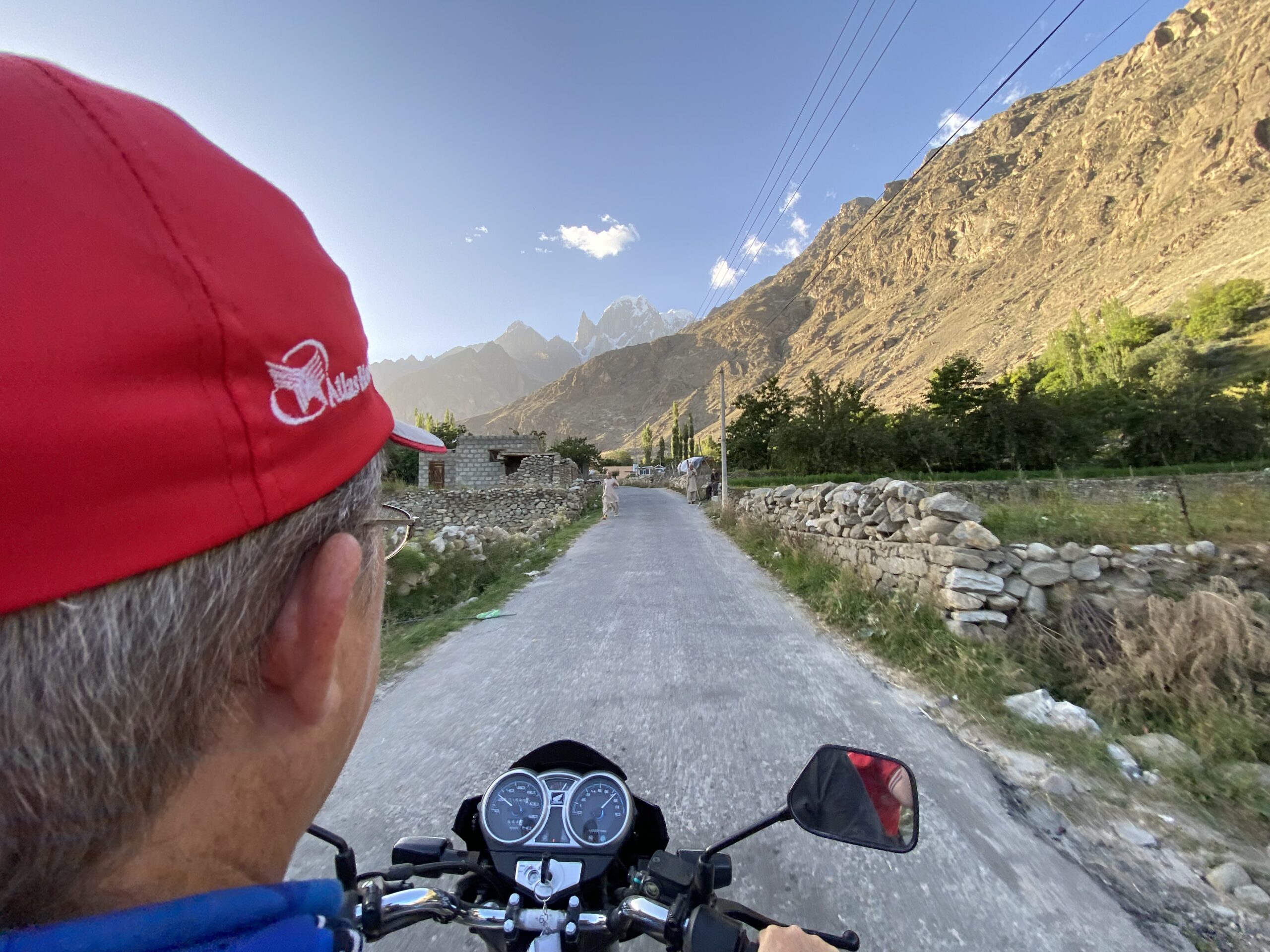 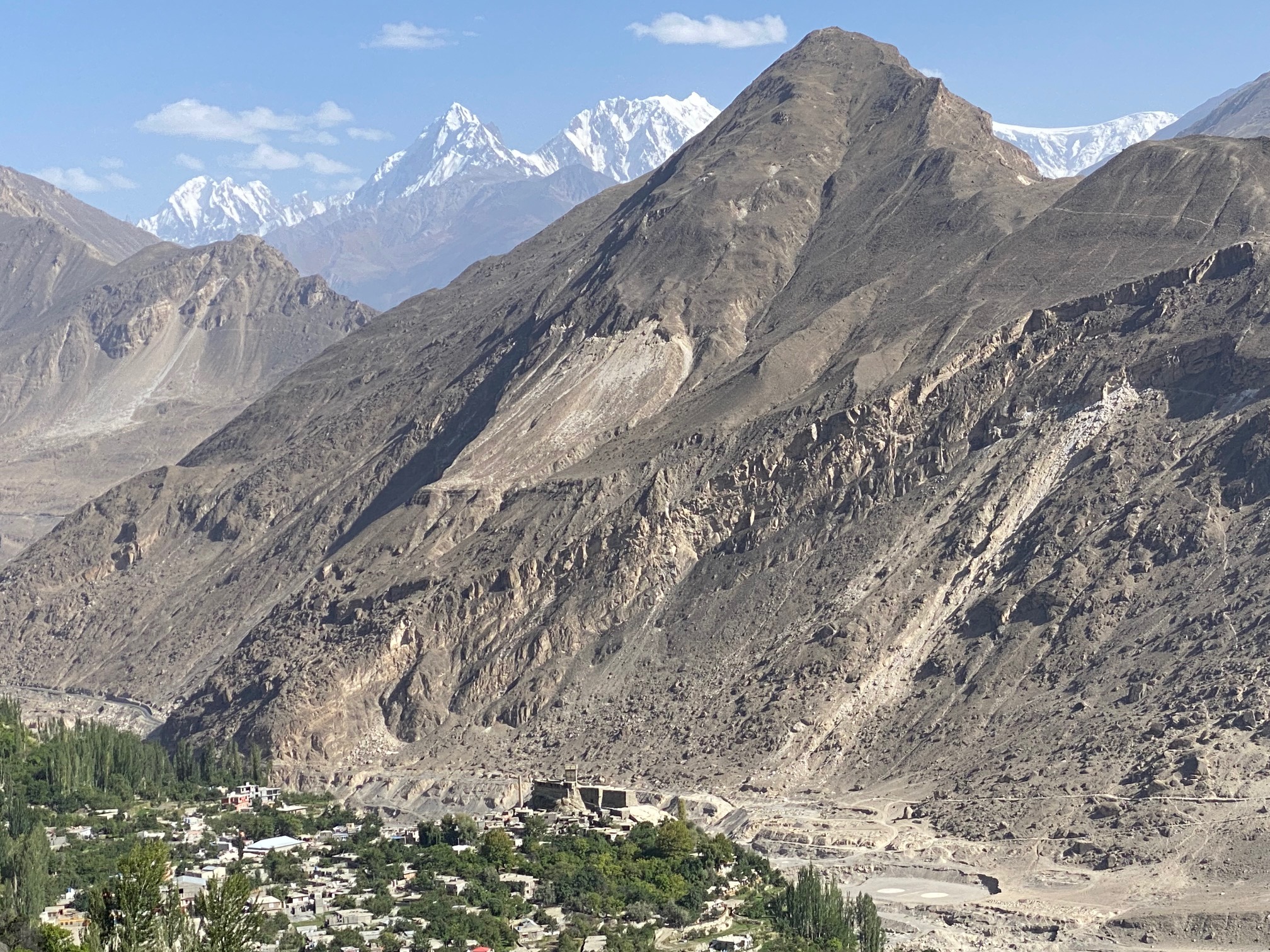 Is there a stigma toward local female riders?

I didn’t see any of that, but we spent most of our time in rural areas of Pakistan.

In 2015 when Zenith rode through her country, she experienced stigma because she was one of the first women in Pakistan to get her motorcycle license and was definitely the first to be so visible to other Pakistanis.

I’m sure it still exists, which might be playing a role in the low number of female riders in Pakistan. But that’s why it’s so important to share stories of women like Zenith and other women in Pakistan—and for foreign women to travel respectfully in Pakistan too.

Is there a stigma toward foreign female riders?

I didn’t feel any stigma toward us as female riders. If anything, I felt very welcomed and accepted as a female traveler and motorcyclist.

We had the great fortune to meetRosie Gabrielle, a well-known YouTube adventure motorcycle traveler, while we were in Gilgit-Baltistan. Rosie has spent a great deal of time in Pakistan and now lives there. She seems to be very well received by locals.

How did the men react to you in the more conservative areas?

The most conservative area of the country that we encountered was on the western edge of our route, nearest to Afghanistan. We could visibly see the difference in the appearance of locals in the ways they dressed. In that part of Pakistan, they were more reserved. They would openly stare but not approach us. I’m sure a group of nine women riding motorcycles challenged some of their social norms. I believe it was an opportunity for growth for them and us. I wanted to be respectful of their culture and country while I was a guest in Pakistan, so I acted accordingly. At the same time, I wanted locals to see that women are capable and equal to men in their ability to ride and handle themselves in a foreign country. 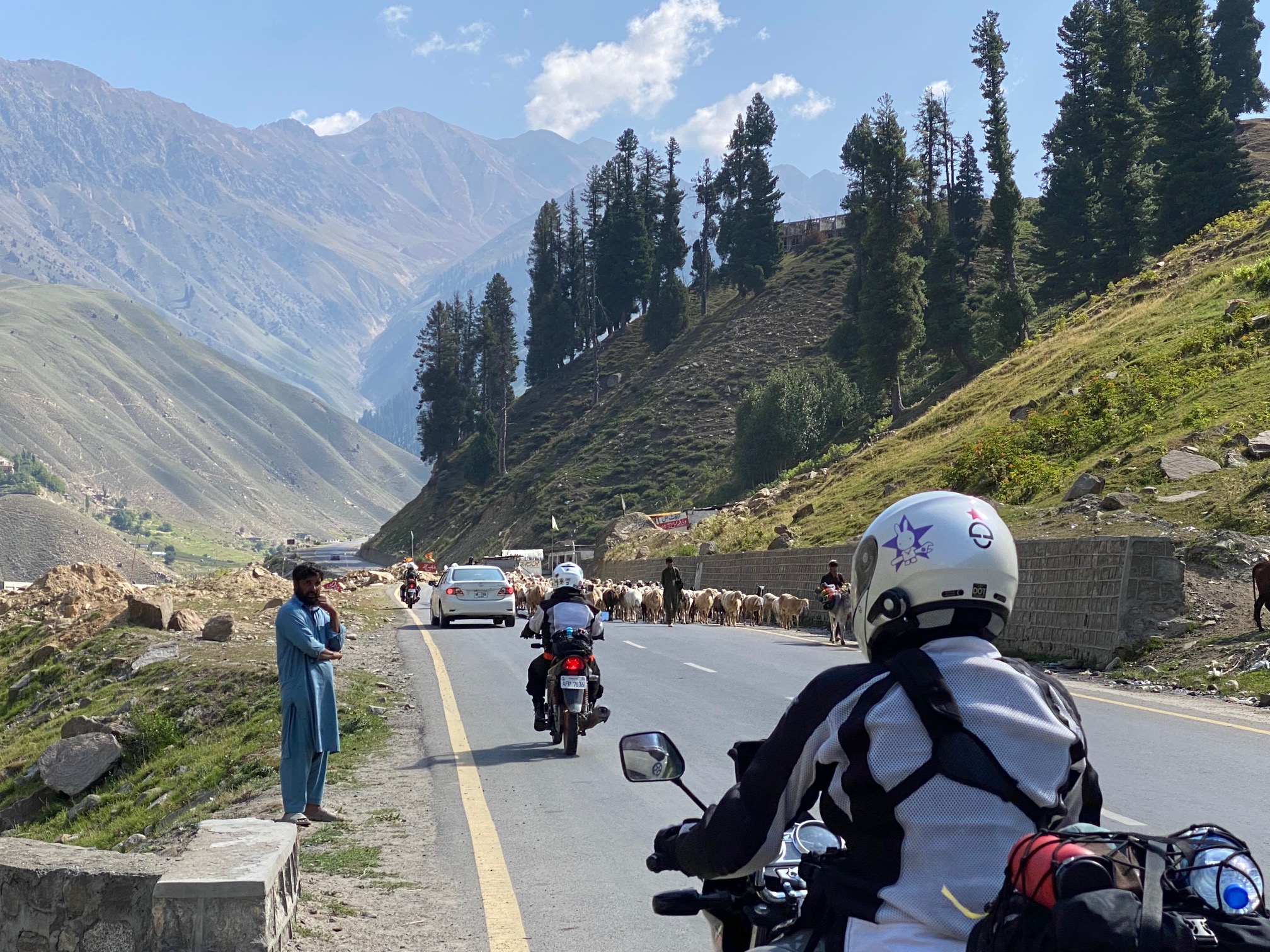 What was the most compelling interaction you had with a local?

On our first day, we rode out of Islamabad early in the morning to avoid rush-hour traffic. We made our way up into the Murree Hills and found a roadside café for breakfast. As we sat enjoying ourchai, a man approached our group, followed by his wife and two small children. He welcomed us to his country and asked where we were from. A few members of our group said that we were from the United States. He seemed surprised. We exchanged a few pleasantries, and after a couple of minutes, he hesitated. I thought perhaps he was searching his mind for a word in English. But that wasn’t it. He wanted to ask a question; he wondered why Americans thought everyone from his country was a terrorist. I felt like I’d been punched in the gut. A few of our group sat in silence, not knowing what to say. Others said that it was mostly the media that fed that perception. And finally, someone else said we, as a group, didn’t feel that way, and that was precisely why we had all chosen to come and see Pakistan for ourselves. He smiled and thanked us for coming to his country.

Would you go back?

In a heartbeat. I’m already looking at routes to ride the next time I go. 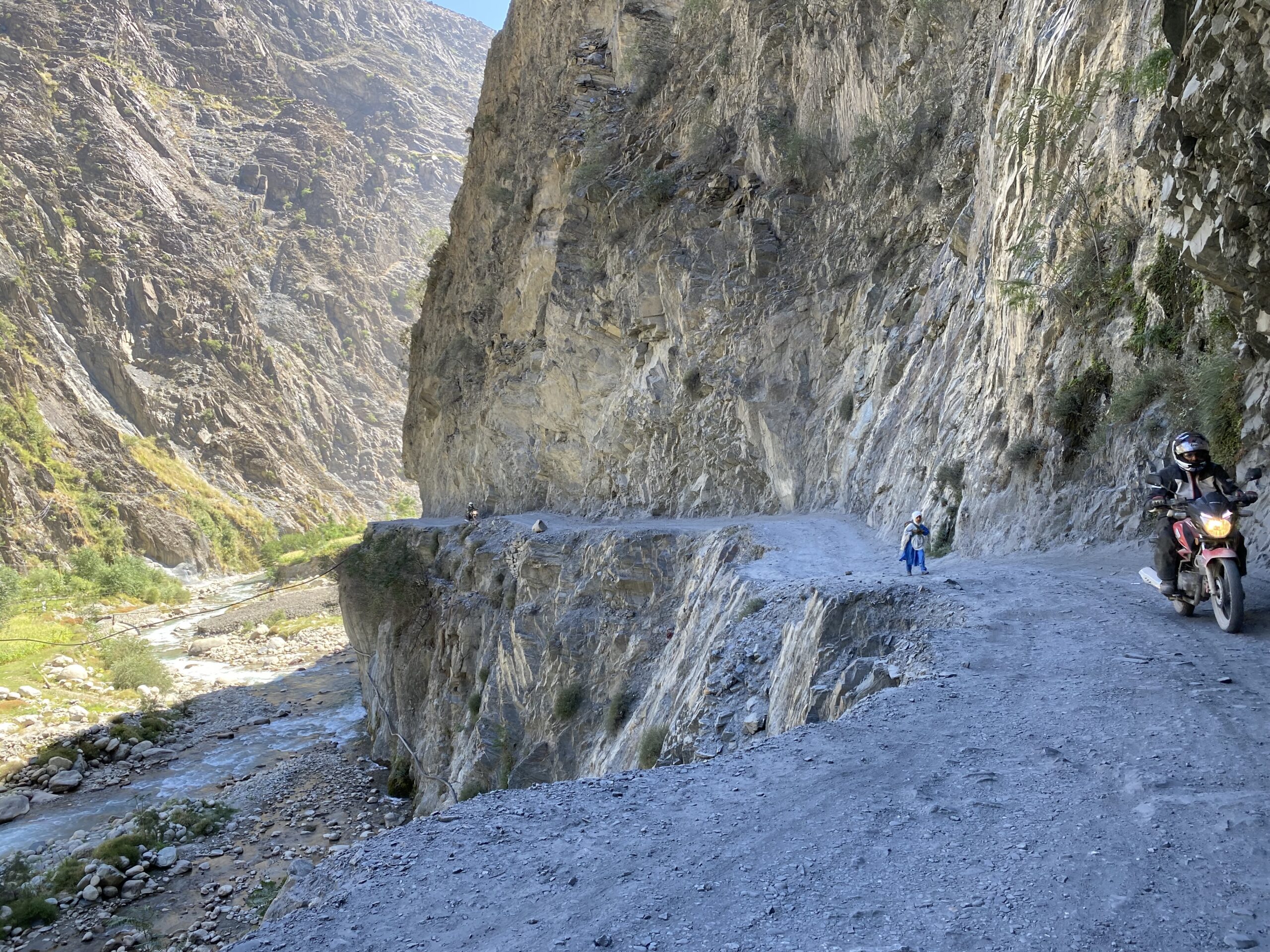 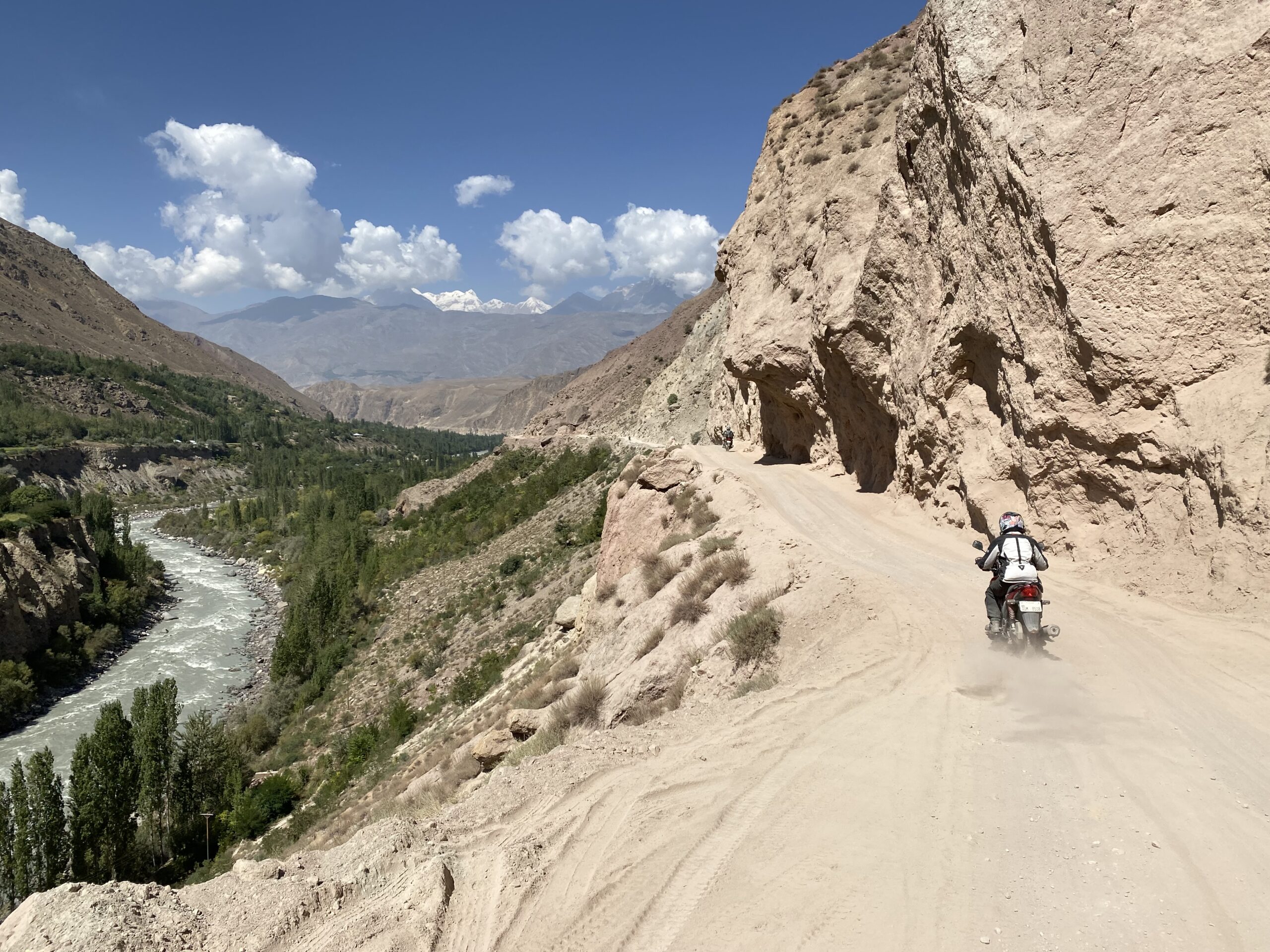 Somewhere between Gilgit and Gahkuch, a motorcyclist waved at Moin as they passed on the road. They said hello at a police checkpoint a few miles later. Moin explained he was leading our group of American women on a motorcycle tour through northeastern Pakistan. The local man, Arif, invited us to his small farm in the village of Sherqillah for a rest and refreshments. We followed him across the river and through the village to a lovely garden flanked by a stone wall and a stream. Arif and his family hosted us with an impromptu picnic of just-picked walnuts, pomegranates, and grapes, with freshly baked bread, homemade butter and cheeses, and hot chai. He and his family were very kind and excited, open to hearing how nine American women had arrived in his small corner of the world. His perfect English, warm handshake, and smile made us all feel so welcome. As friendly as people are in the USA, that kind of genuine hospitality and trust in our fellow man isn’t something we see much of anymore—a sad truth about our modern world. This encounter was even more special to find that sort of kindness and openness far from home—a place that we, as Americans, know so little about and have such a distrust for. 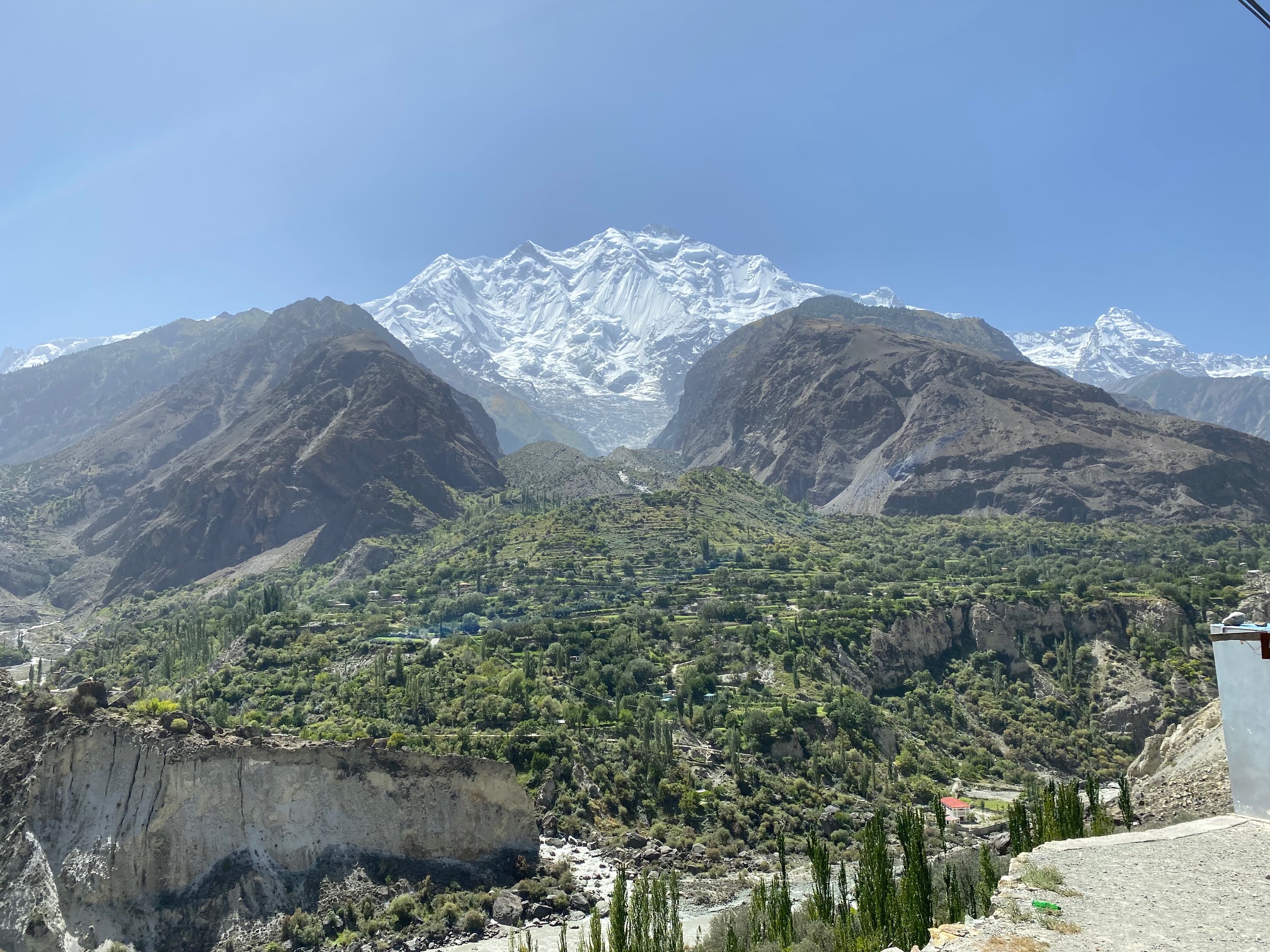 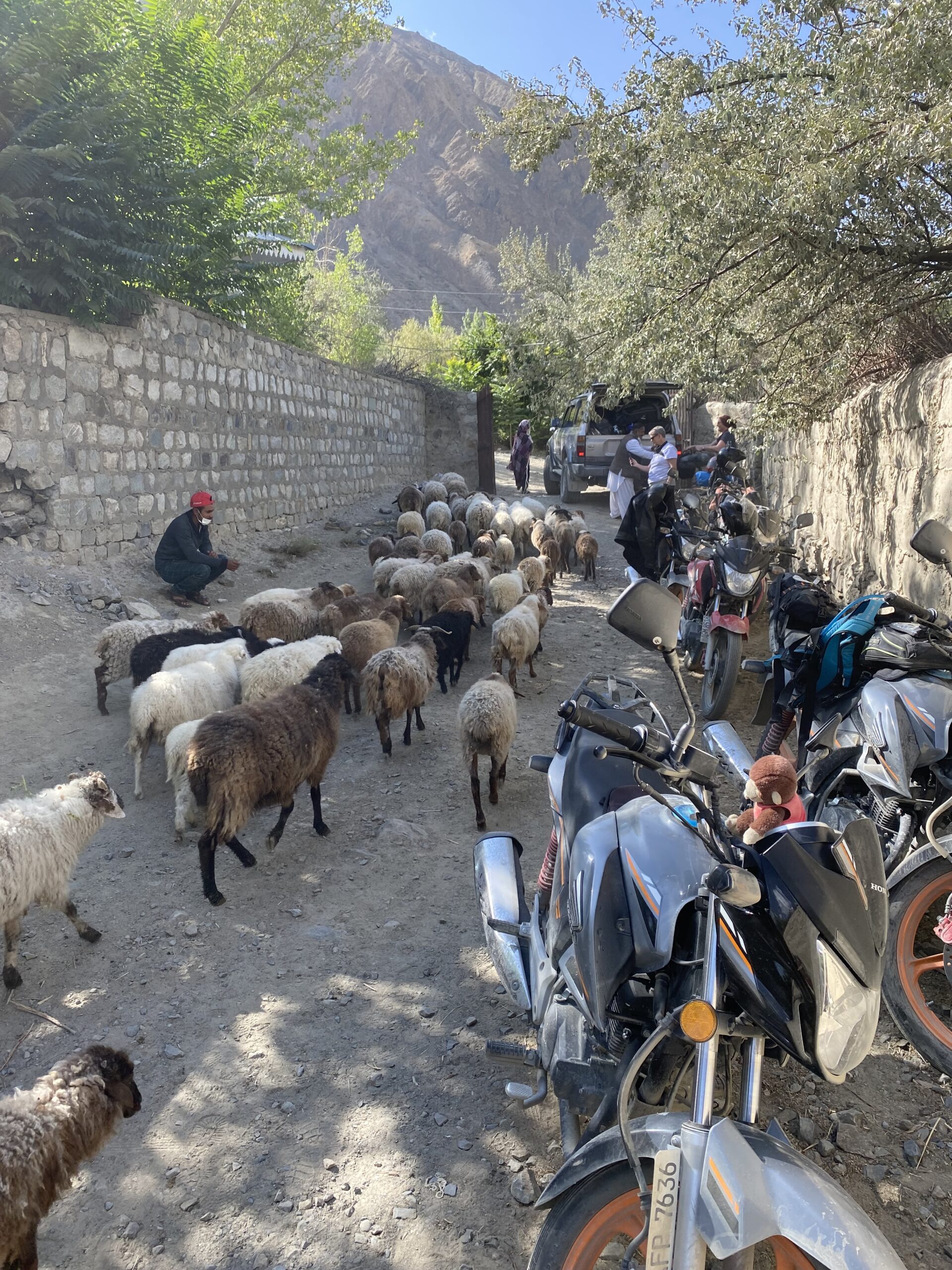