Joe Cruz, Logan Watts, and Skyler Des Roches are something of a bikepacking dream team. Joe, a friend and neighbor from Brooklyn, is perhaps the world’s premier bikepacker. He spent a year pedaling Pakistan, Nepal, and Tibet in 2007, and rode his Pugsley the length of South America, to name a few notable trips. Logan, mid forties and Merlin-bearded, is laid back, Southern, and last year biked thousands of miles through Africa. Skyler, Canadian, and the youngest member of the crew, is no less adept at backcountry travel, having pioneered Canada’s longest bikepacking route through BC’s Coast Mountains. Thanks entirely to the the World Wide Web and happy circumstance, I found myself in western Colorado with these three, camera strapped to my chest, grin spreading across my face. 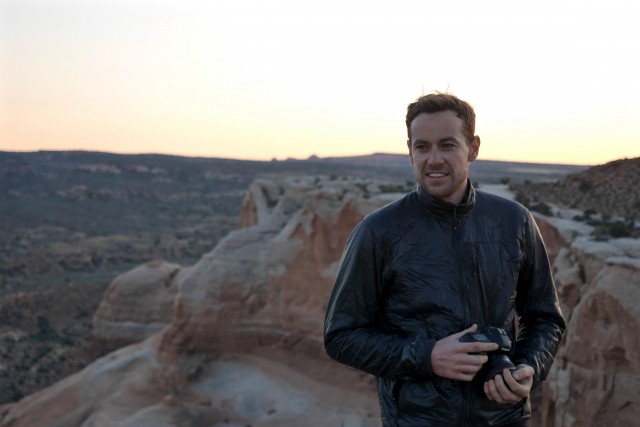 The author and his cohorts. 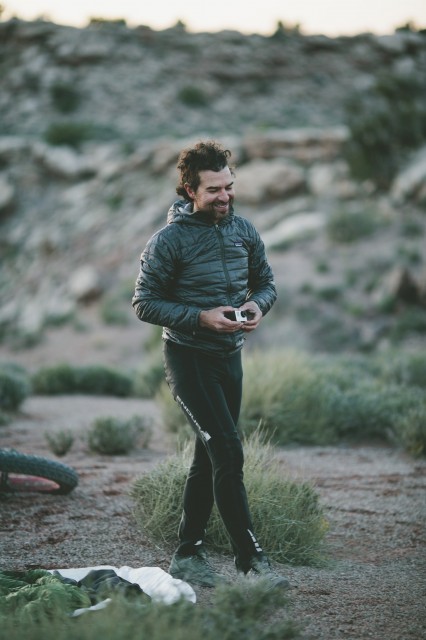 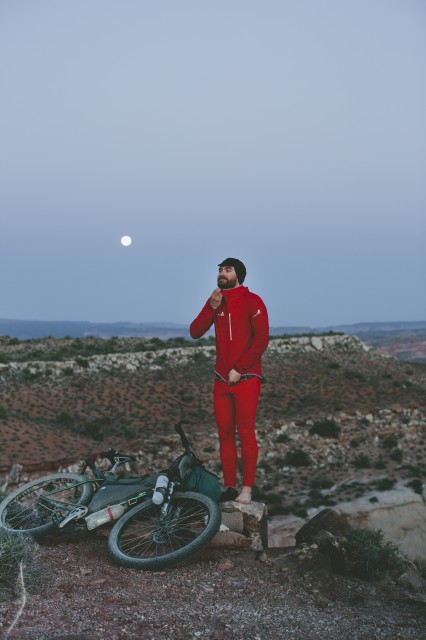 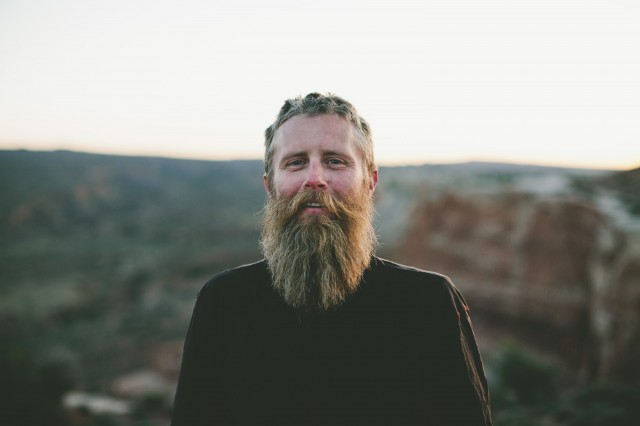 With four liters of water and three days of food packed on my bike, we set out from Fruita, CO mid afternoon, heading west. Day one of the ride—as I lifted my bike up and over a boulder and ripped down a section of technical singletrack—I realized I had come to western Colorado with two serious misconceptions; one, that the Kokopelli trail was too well known to make for a real adventure, and, two, that a fully loaded fatbike would be slow going! The plan was to ride the Kokopelli Trail (150 miles, 3.5 days) to Moab, UT, resupply there, and then continue on to Kane Creek and Pritchett Canyon for another two days of riding. 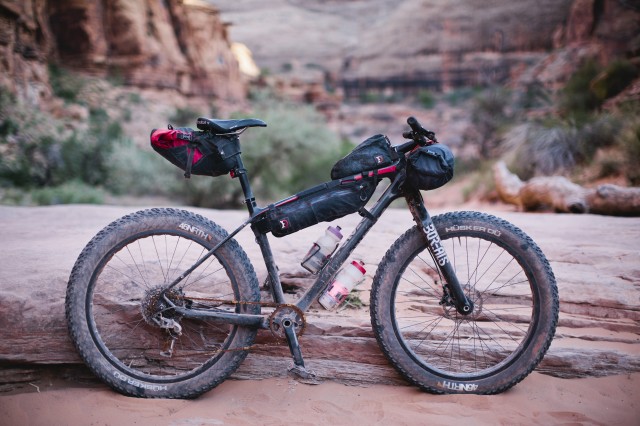 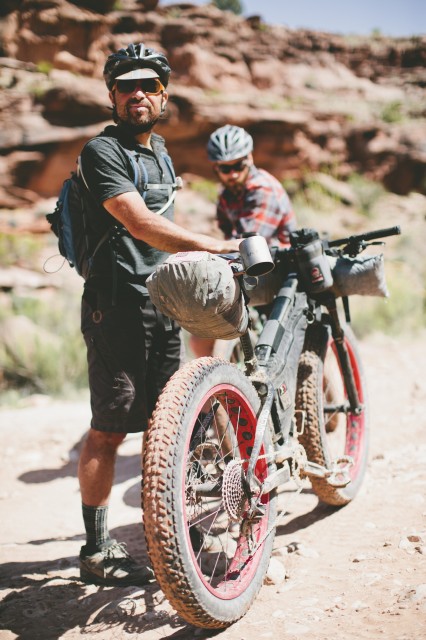 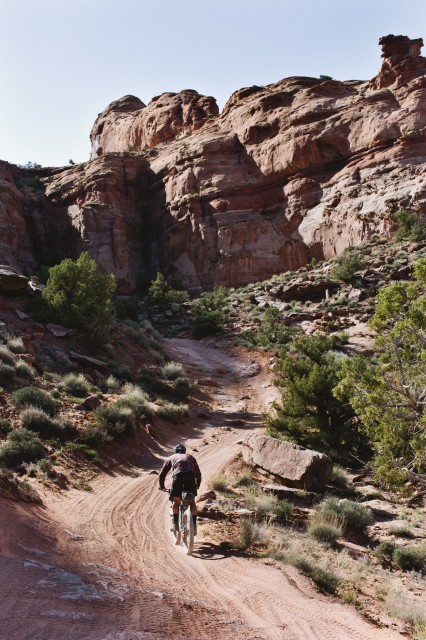 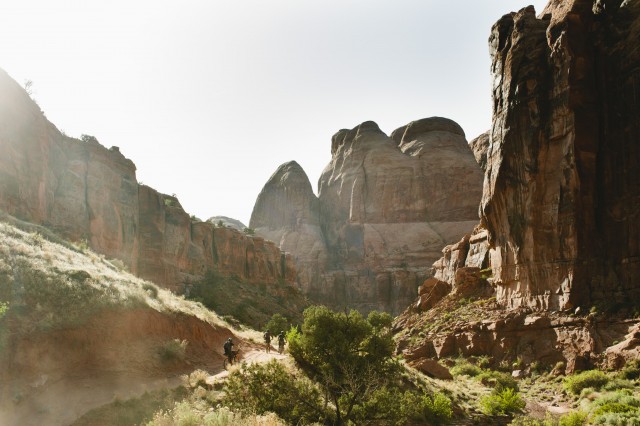 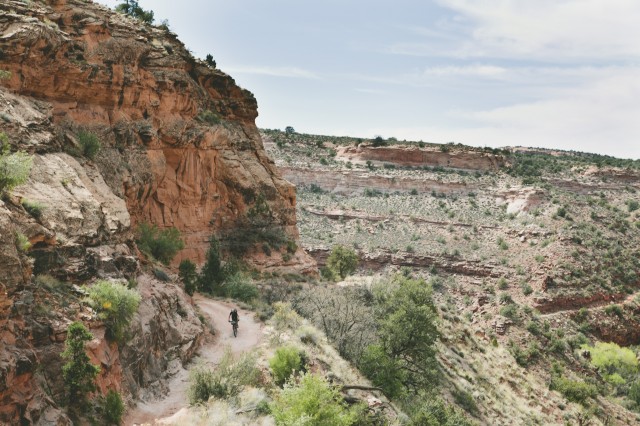 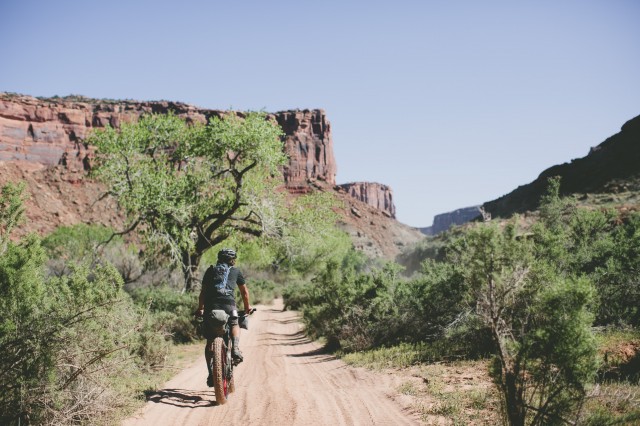 Borealis Bikes in Colorado Springs had set us up with two carbon fatbikes for the trip: A Yampa for me and an Echo with a Rockshox Bluto for Joe. Just as I had underestimated the Kokopelli Trail, I was equally blown away by the rideability, handling, and general awesomeness of a fully loaded Yampa. Food, water, shelter, bag, and pad all loaded on a FATBIKE means you’re in for a slog, right? Wrong. The Yampa climbed as if unencumbered and on the downhills the 3.8” tires made me totally forget that I was on a rigid frame. Joe was an equally big fan of his Echo, “Intuitive race bike handling even with a full bikepacking load, coupled with the limitless traction and comfort of a proper fatbike. The light weight and front suspension heaped a dollop of flat out fun onto backcountry adventuring.” Astride a Borealis, I felt that if I were fit enough, the bike could take me anywhere. 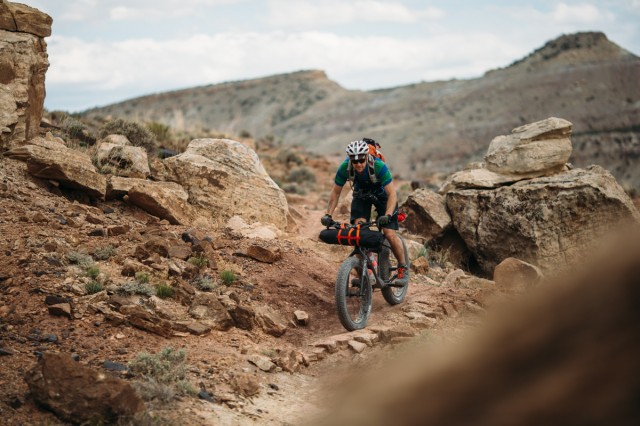 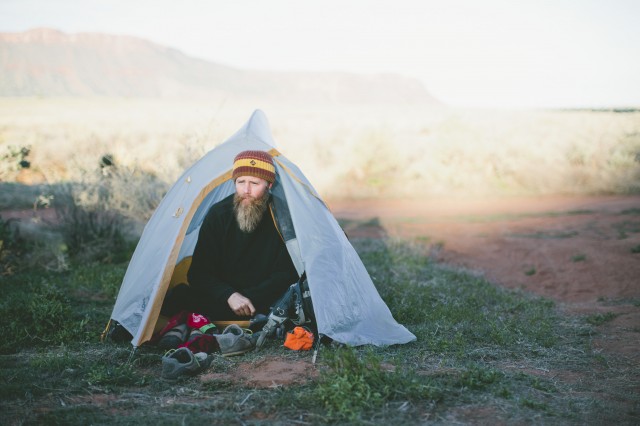 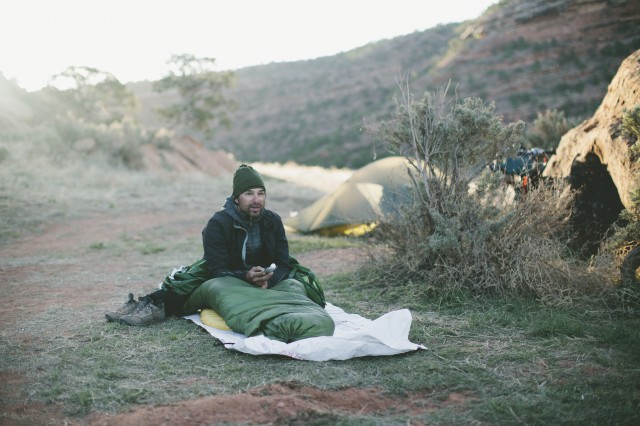 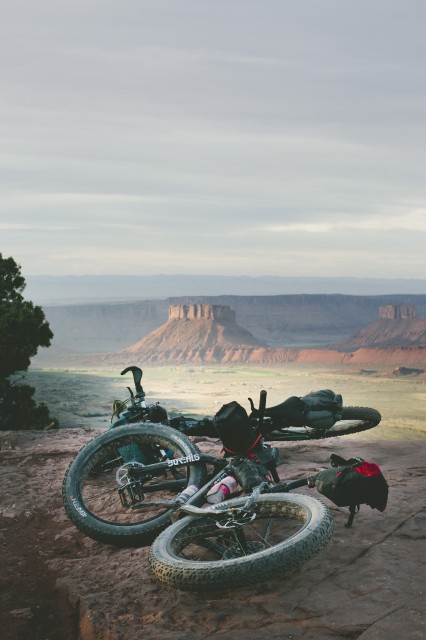 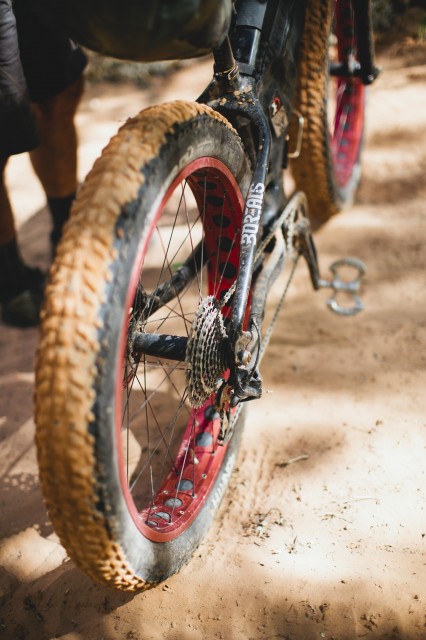 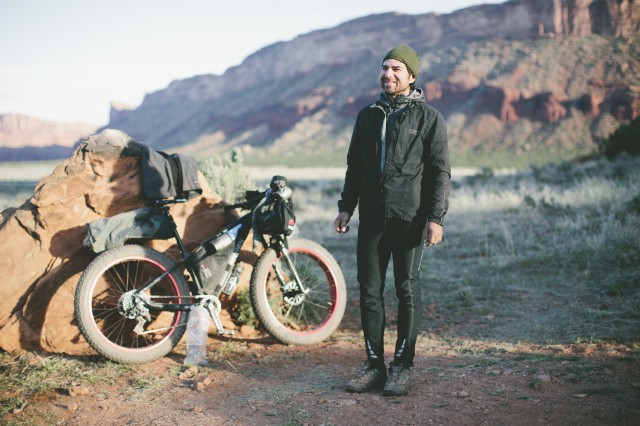 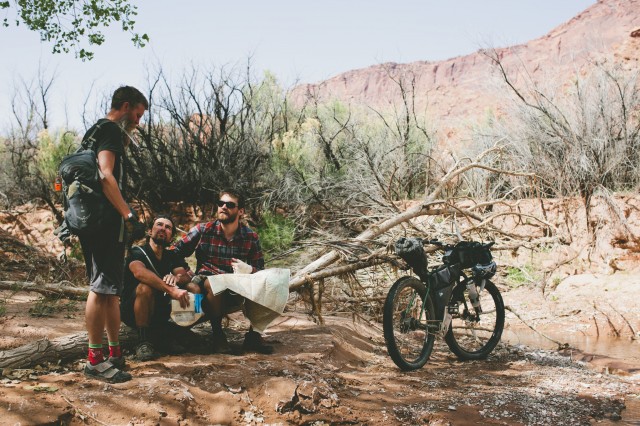 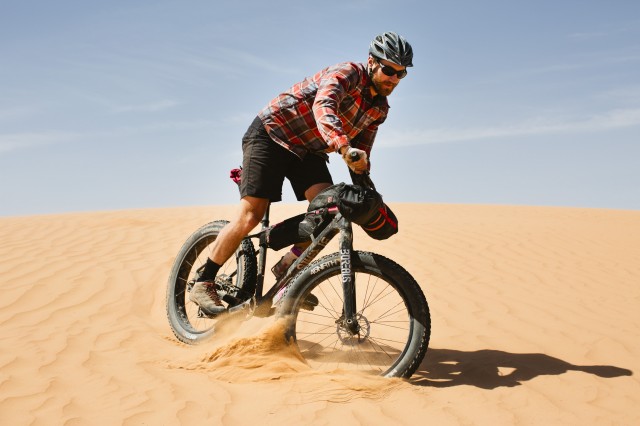 The Kokopelli Trail is a beautiful route combining a variety of primitive roads with surprisingly technical single track that kept us guessing around each bend. Scrubby and open in the east, the route became richer and the landscapes more Mars-like as we approached the canyon lands of the high Utah desert. Sand, dirt, gravel, slick rock, creek crossings, you name it. At the end of each day we found a likely place to camp, the criteria being something flat, preferably with a view, and plenty of dead wood to be harvested for firewood. Night two found us huddled around a campfire on a cliff edge watching an enormous full moon climb into the nights sky, lighting the canyon beneath us. Awake and shivering in the unexpected predawn cold, Joe was first to see the lunar eclipse; a dark orb ringed by a bright white border, an incredible, rare event to behold from the remoteness of the trail. The following day, thirteen hours in the saddle with two long climbs topping out at 8400′, tested our fitness. The trail ended dramatically with a high-speed descent along Porcupine Rim, racing the sun as it set over the pastel landscape, canyons as far as the eye could see. We negotiated the final and most technical miles partially by headlamp, sheer exposure to the Colorado River hundreds of feet below. This is the way to enter Moab! 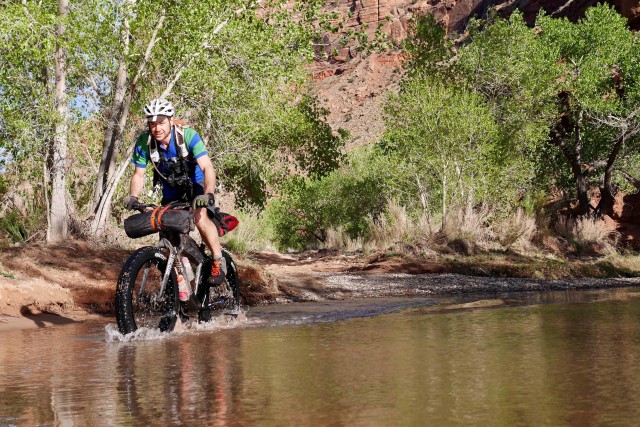 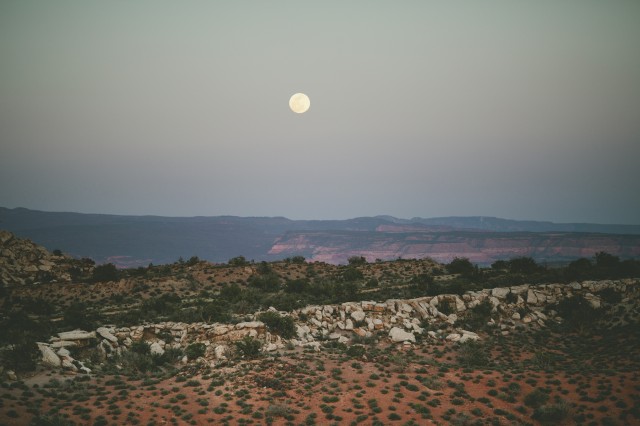 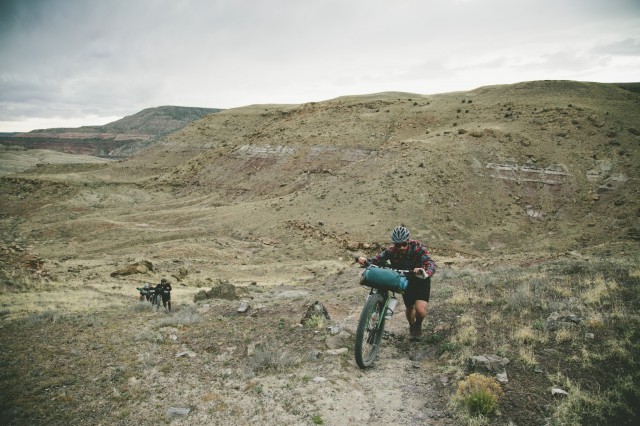 After eating the “Mother of all Burritos” (M.O.A.B.) in town, we resupplied and headed out in the direction of Kane Creek. Deep sand and big wind would be our near-constant companions for the majority of the final two days, the suffering alleviated periodically by fast paced descents in which four pairs of fat tires skimmed down the copper surface of the sand producing an elated, barely-in-control feeling, not unlike that of powder skiing. Our ride ended amidst the sheer majesty of Pritchett Canyon, all angles and hard rock, drops and benches, as we re-entered outdoor adventure headquarters, Moab, UT. Amazing trip, the best company, no better way to spend a week outside! 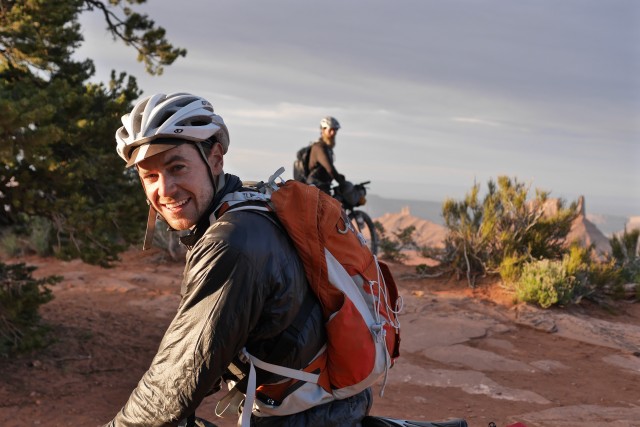 Joel is a lifestyle and adventure photographer based in Brooklyn, NY. www.Joelcaldwell.com