When my headlamp flickered one last time and everything went inky black, I wouldn’t say I panicked, but I was definitely not stoked. I stood in the darkness and looked up, the edges of the canyon walls made visible only by an outline of twinkling stars. With no moon, it was damn dark.

I plucked the batteries from of my GPS unit, put them in my headlamp, and turned it back on. The low power light burned red indicating I had bought myself another few minutes of light, but not enough to get me back to the car. I scanned the sides of the road for a flat spot, found a tiny plot just large enough for my tent, and set up my camp. I was only 10 miles from my car but knew I couldn’t get there in the dark. Time was ticking. I wasn’t feeling terribly at ease.

Only 17 hours earlier, my three-day bikepacking trip into the deep canyons of Southern Utah had begun in earnest. It was a trip several months in the making, but one I struggled to get on the books. Initially invited to complete the route last fall with Andrew Wracher of Bedrock Bags, his departure date didn’t mesh with mine, so I had to while away the winter months waiting for dry conditions. Then in March I had my shot––and I took it. 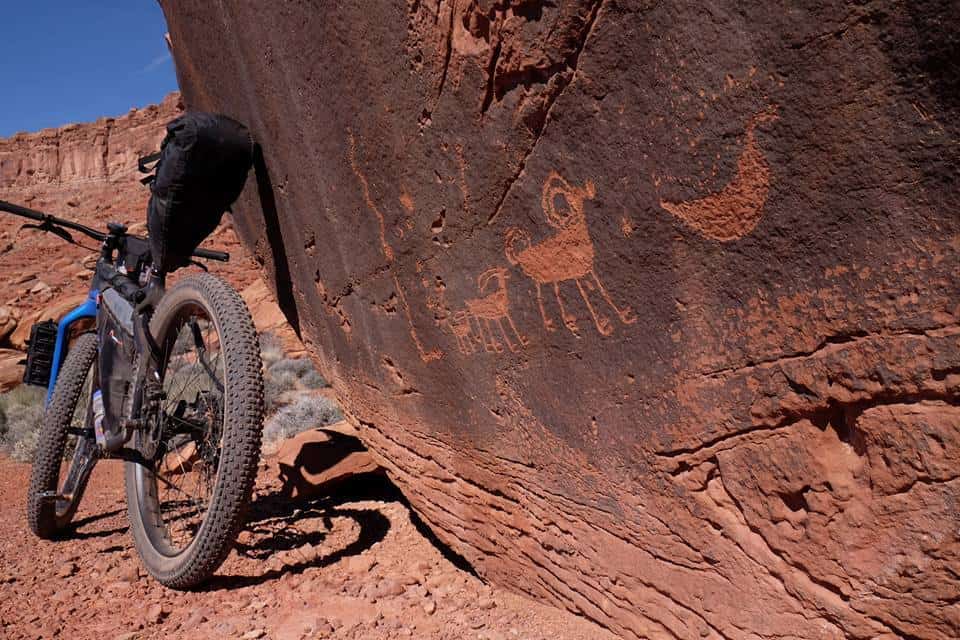 When Andrew first told me of John’s Canyon I was instantly intrigued. A place of rugged natural beauty within view of Monument Valley, it was once the scene of a gruesome set of murders and mysterious disappearances. In the 1930s, a nefarious drifter from Texas named Clint “Jimmy” Palmer arrived in the area with a teenage girl named Lucille Garrett. Palmer had killed her father in a gambling dispute and took her has his involuntary bride. In the winter of 1935, Palmer’s murderous tendencies came to a boil once again when he butted heads with local cattle ranchers over grazing rights.

The abridged story places hapless locals William Oliver and his grandson Norris Shumway in the canyon with an easily riled and armed Palmer. Eventually both Oliver and Shumway were dispatched, their bodies dumped over a cliff. Palmer quickly fled to Texas where he was captured and imprisoned until his own death in 1969. Other bodies were found in the John’s Canyon area in the years that followed, ostensibly more victims of Palmer’s cold blooded wrath. I was riding within spitting distance of where many of these ill deeds were done. 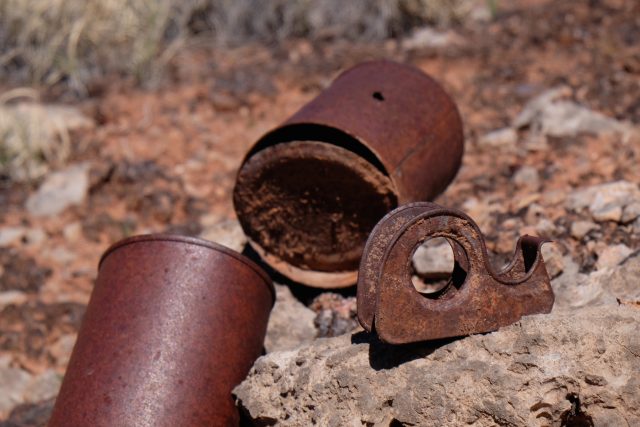 As the sun hit its high point, I found myself scrambling over one of two major rock slides which years earlier had pinched off the old road leading along the edge of the San Juan River to the confluence of Slickhorn canyon. Overgrown and only faintly delineated from the desert flanking it, the road is in many places less of a definitive track and more of an ambiguous directional suggestion.

In the late 1890s, the road was built to service an oil well which had been abandoned shortly after. Since the rockslides, the only visitors to reach the area traveled there on foot, and I doubt there were many of them. In various places I could still clearly make out the tire tracks left by Andrew and his crew some five months earlier.

The further I traveled to the far point of my route, the rougher the terrain became. My tires sank deep into the sand as I maneuvered around rocks and scruffy patches of vegetation. It was a fatiguing section with my average speed slowed to a near walking tempo. It was taking a toll on my body, and I knew it. 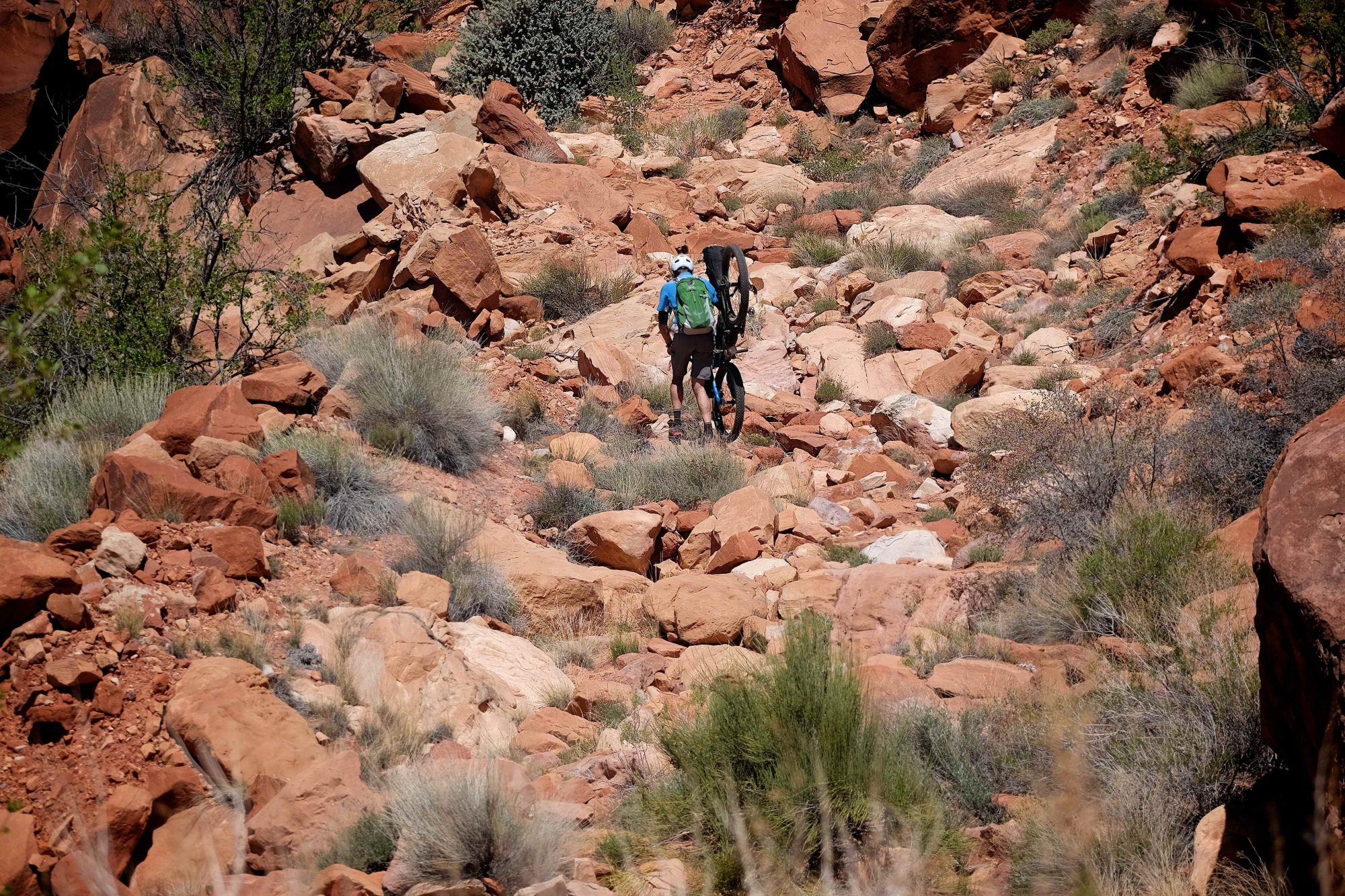 Those who know me are aware I am tough as nails, maybe too much so for my own good. Call it good old stubbornness, I don’t back down from a challenge. My most recent battle, one I have made known to all, is my continual contest with type 1 diabetes. In the last year I have made my condition a daily sparring partner and have faired well to prove my dominance over it. I have used places like the Andes and the summit of Mount Washington as the anvils on which I have pounded type 1 into submission. A year in, I think I started to get a little too cocky. 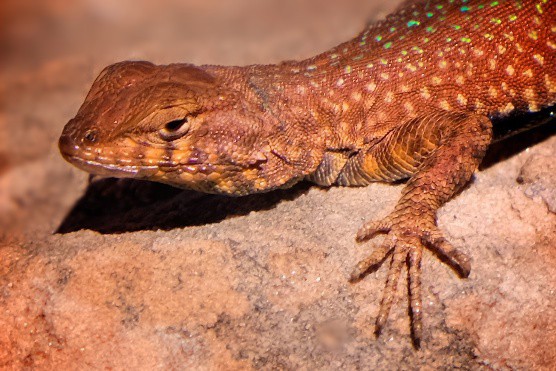 For those new to type 1, my body requires multiple daily injections of insulin to maintain a normal blood sugar level. Insulin forces my blood sugar levels down, but if too low, consuming sugars (or carbohydrates), helps raise them. It’s very much like balancing a ping pong ball on my nose all day––every day.

When I finally arrived at the terminus of my route at the mouth of Slickhorn Canyon, I set up camp, crawled into the shade of a boulder, and for the tenth time that day, poked my finger to test my blood sugar. The digital readout on my glucose meter revealed what I had feared. I was getting dangerously low.

For anyone with this condition, such setbacks are common and nothing to fret, but given my location a day’s ride to civilization, it was an issue. I ate a small handful of jelly beans and settled back into my shady refuge. Another test 30 minutes later elevated my concerns. My blood sugar was still very low. I continued to eat more sugar, test yet again, only to admit nothing was improving. Then I realized just how much of my sugar supplies I had depleted during the day––and it was an alarming amount. More than I had consumed ever before, and by a multiple of ten. It was clear action had to be taken.

I set out all of my remaining supplies, calculated my estimated consumption, and conceded I was in trouble. While high blood sugar levels are no fun, they are often of little immediate consequence and stabilized with insulin. Low blood sugar levels on the other hand can quickly escalate to seizures, coma, and…let’s just say the ultimate of worse. I could have become one more casualty of John’s Canyon.

With the sun well past its highest point I made the decision to pull the plug. It had taken all the energy I could muster to get to Slickhorn Canyon, but I knew I had to reset my mental trip meter, and start riding back. I didn’t know if I could make it all the way to the car, but I was hell bent on closing the gap. After a hasty pack-up I had my gear mounted and I was retracing my fresh ruts in the sand. 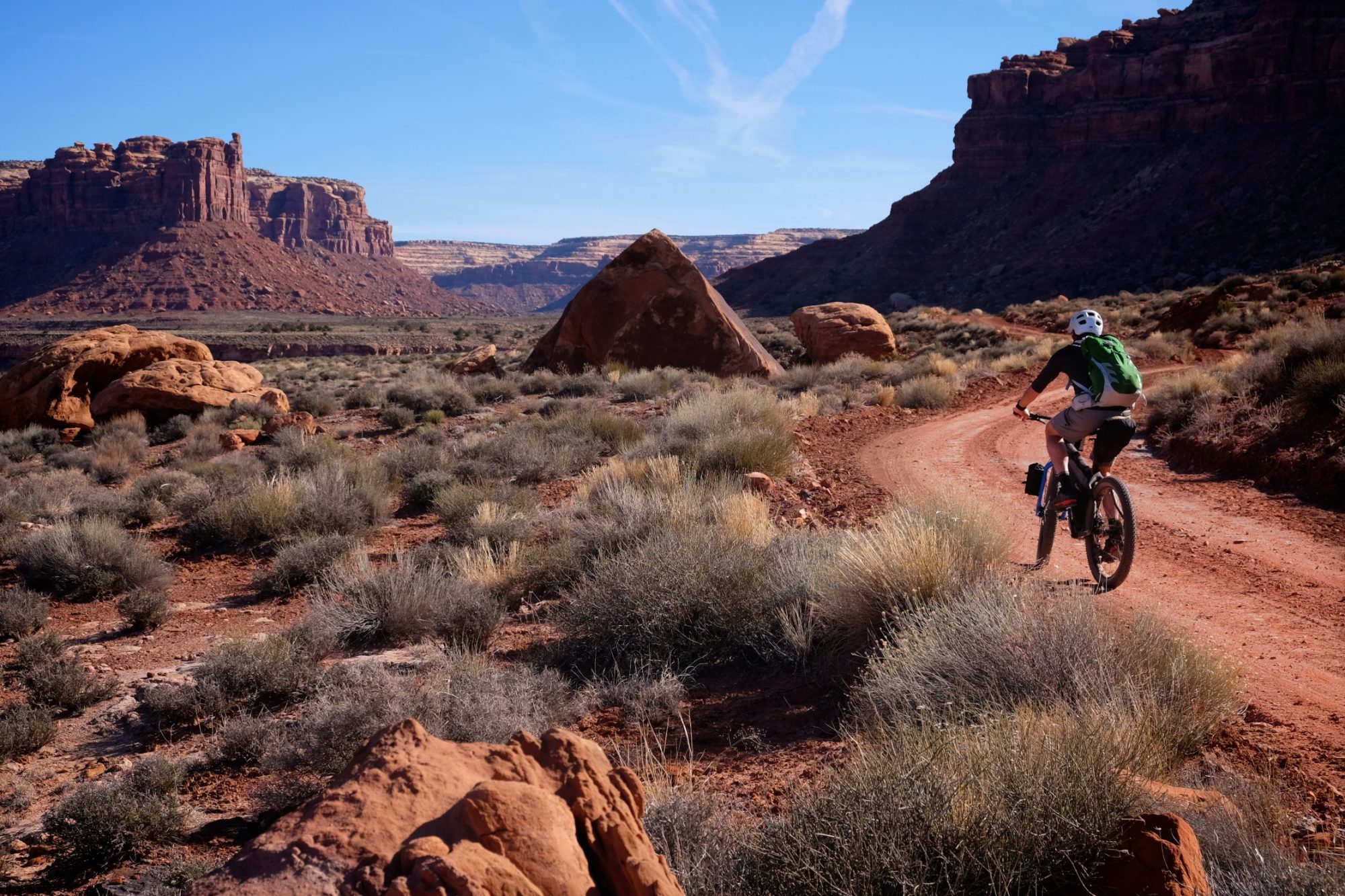 Pushing on the pedals, I felt the pain of the previous 35 miles, but tricked myself into believing I had aimed to do 70 miles all along. Anything is possible when framed with the right mental context. I glanced at my watch again. It was 4 o’clock. 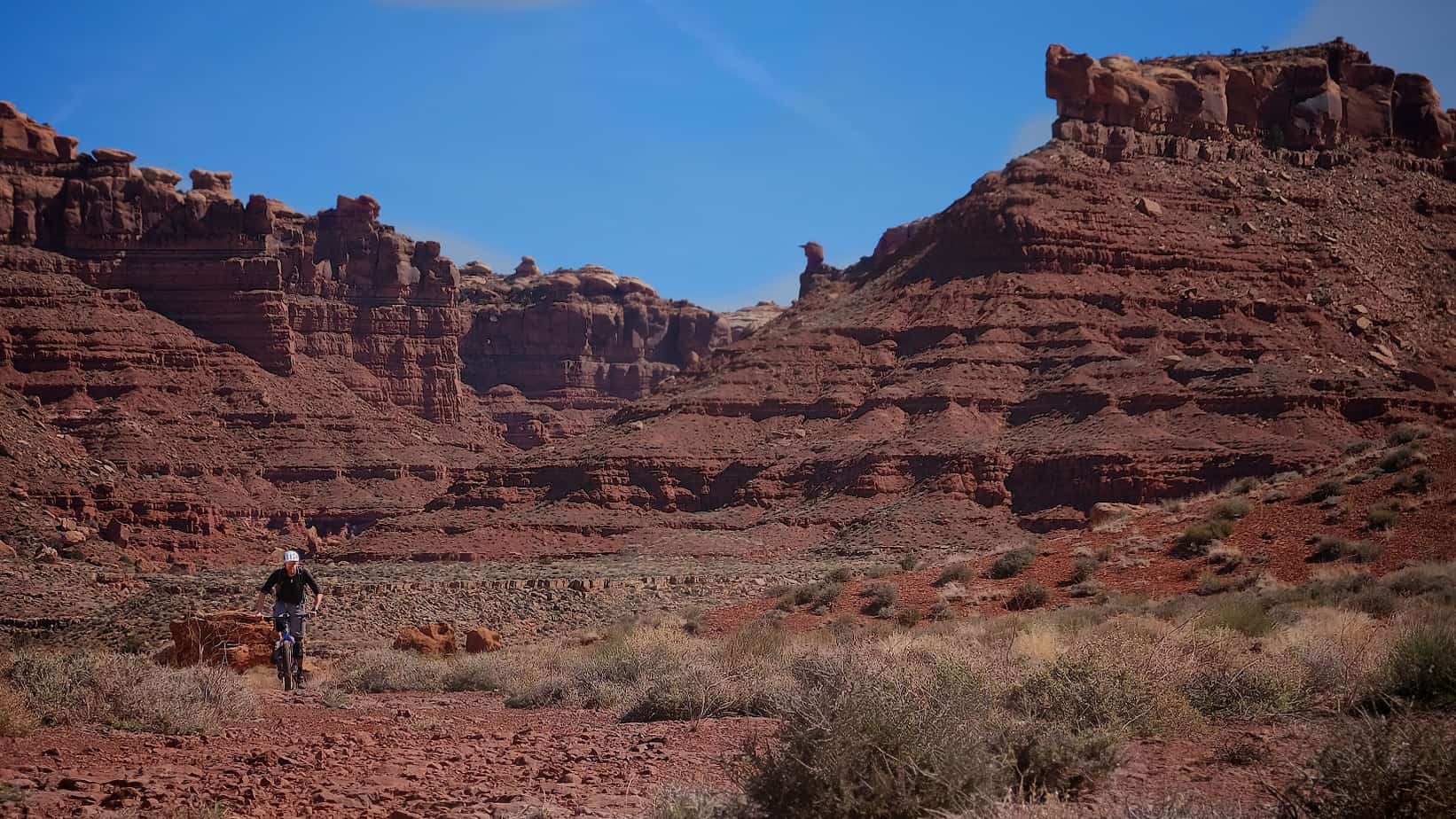 On the way back, my muscles aching and tired, I let my mind drift off to the 1930s and to the tragic events that took the lives of Oliver and Shumway. I thought about Lucy Garrett, forced to live under the heavy hand of her father’s killer. I tried to imagine how hard it must have been for the oilmen who came so far to carve out such a rugged road, the remnants of which were barely visible under my wheels. With the day’s light fading, I rode past a giant boulder scratched with petroglyphs, ancient communications left behind eight centuries prior by the now absent Anasazi. With sweat pouring down my face, my eyes fixed on my GPS unit as I counted down the miles, I broke the silence of the desert and said aloud, “This place is brutal.” Two hours later, with more than 50 miles behind me and in the dark of night––my headlamp crapped out. 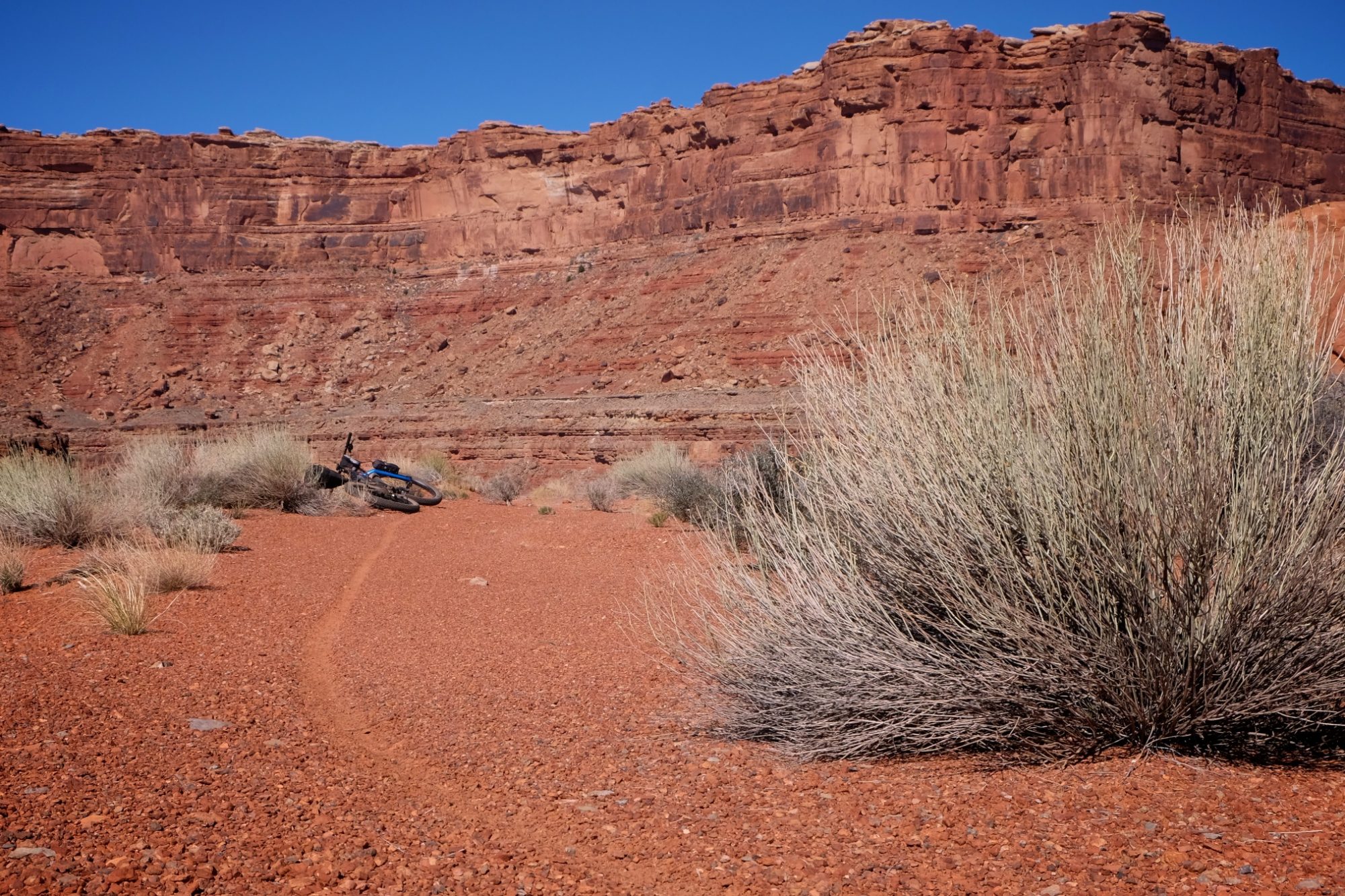 Over the course of the night I continued to test my blood sugar, consume more snacks, and did my best to recover from a 15 hour bike ride. The next morning I packed up my camp, rode the last ten miles to the car, grabbed my extra bag of emergency snack foods and held it tight in my arms like a newborn. I had made serious miscalculations, tempted the fates more than I should have, but once again overcame my setbacks with little more than good backcountry judgement and––dogged determination. With my bike loaded on my car, the dust of 72 miles crusted on my face, I broke the silence again, “This place is beautiful…but #!&$ is it brutal.” 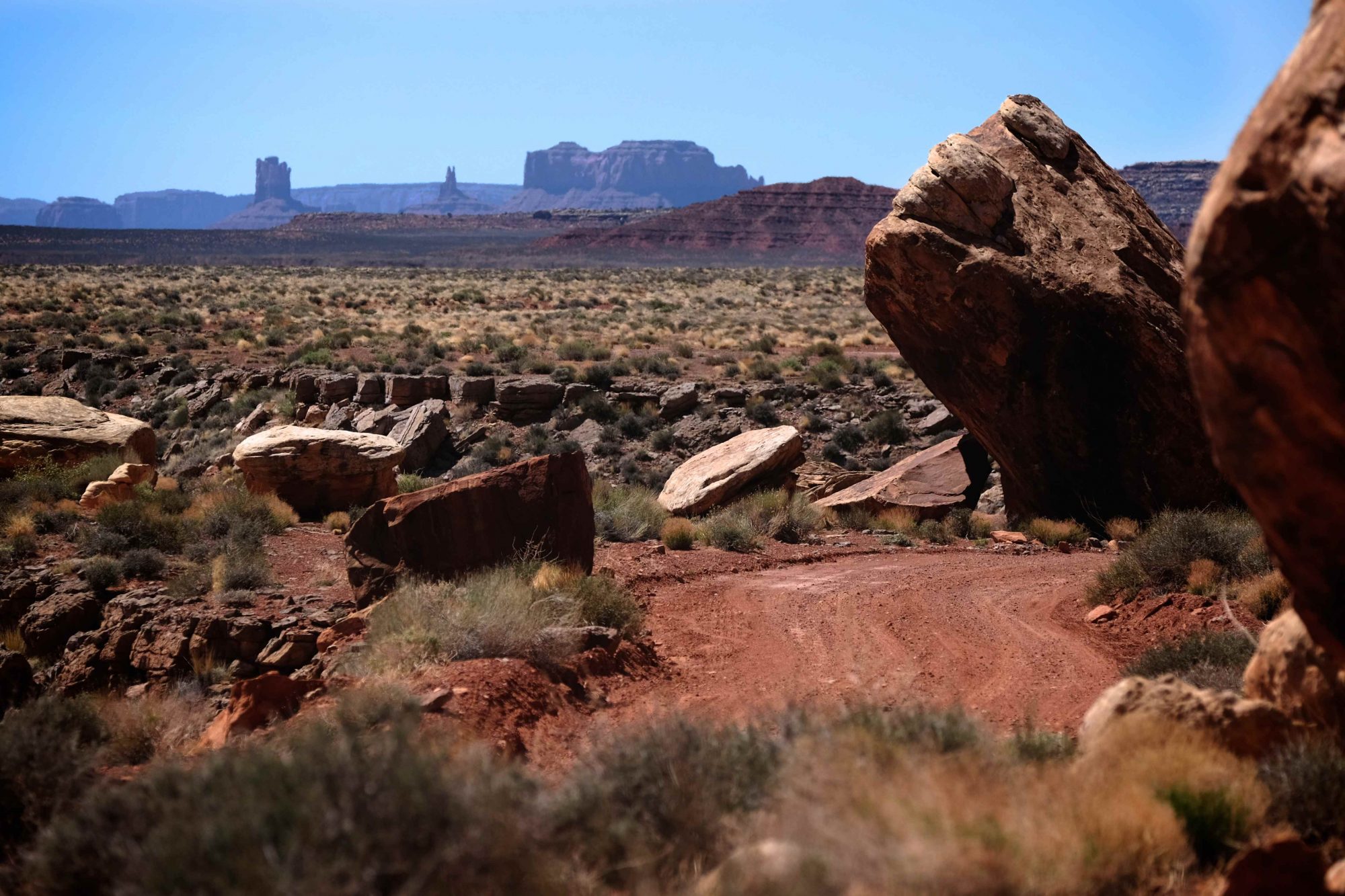 My trip wasn’t a total bust. I covered most of the miles I wanted to travel, but didn’t get to spend the time I hoped to visiting the old haunts of Oliver, Norris, Lucy, and the killer known as Palmer. I had been chased away by my own villain, the disease within. What I realized on the way home while turning onto pavement was that only tough people filled with conviction can survive places like the high desert––and type 1 diabetes. Before my car ever rolled into my garage five hours later, I vowed to return to complete the ride. – CN

Because you can never keep a good man down, and that’s something I always aspire to be, I went back to John’s Canyon three weeks later and finished what I had started. I retraced my tracks, carefully measuring my insulin injections and consumption of carbohydrates. I tested my blood, and my resolve, several times over the course of two days and 70 miles. I beat type 1 diabetes this time. Never stop pushing the limits. – CN 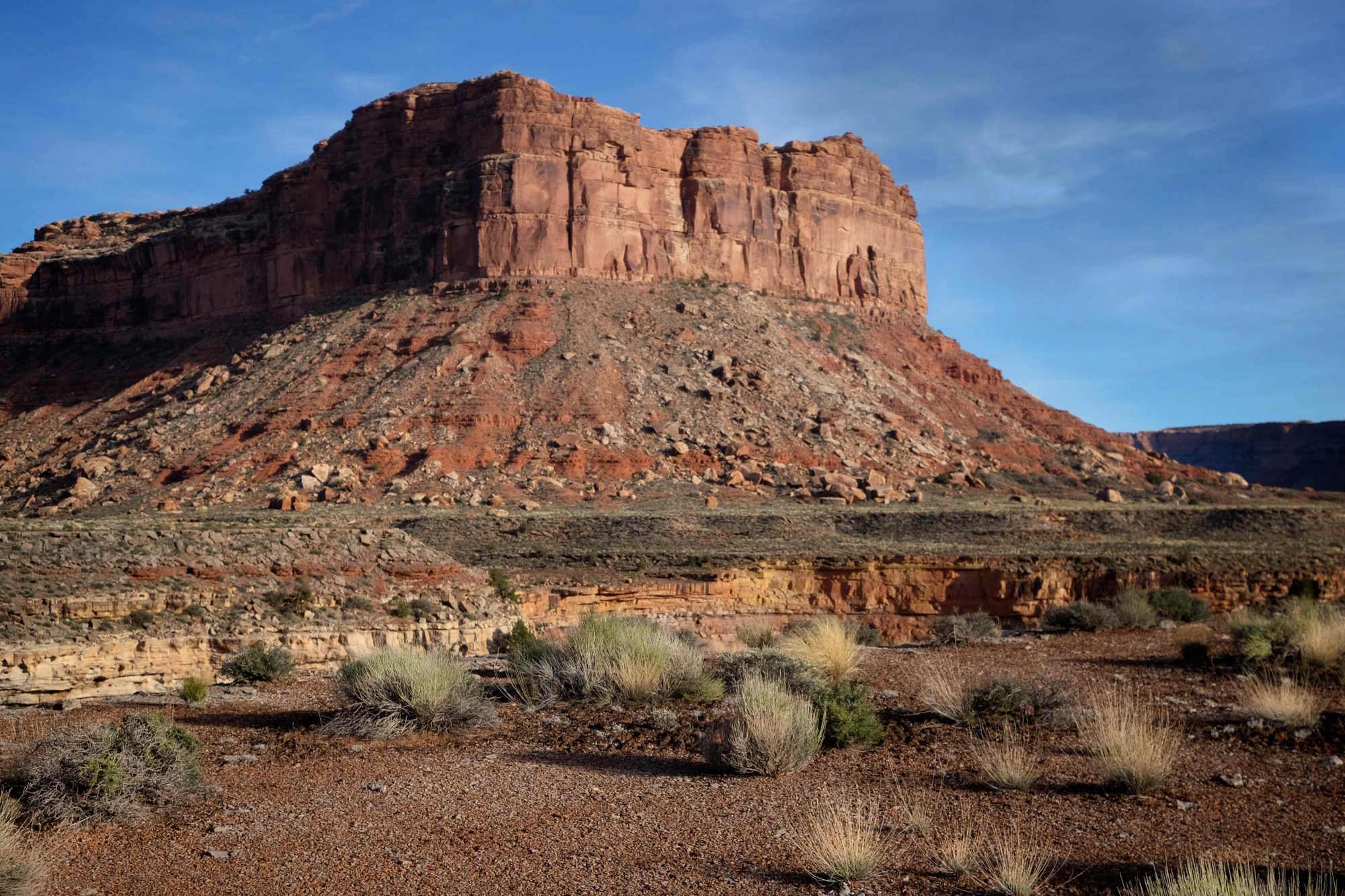 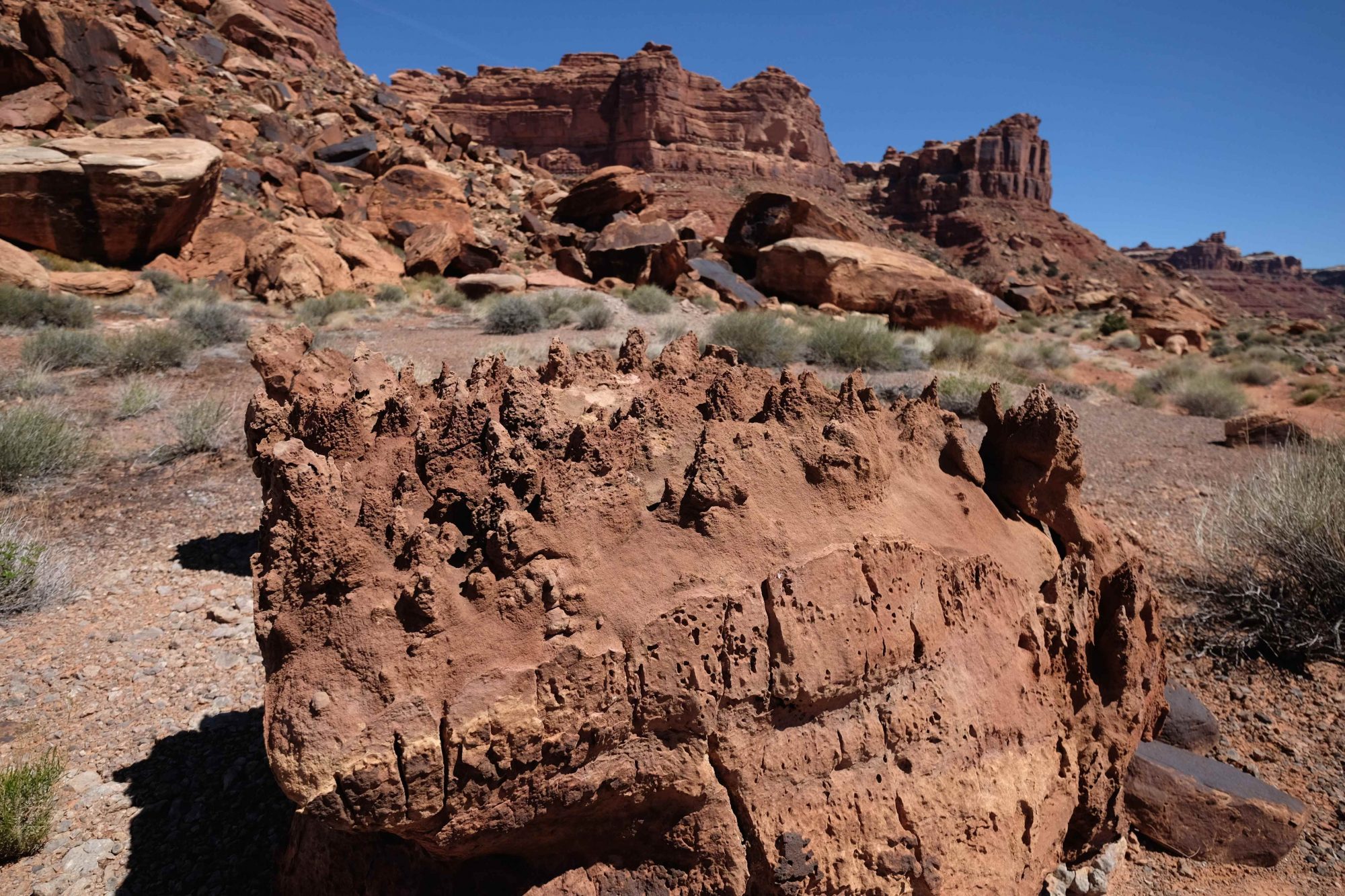 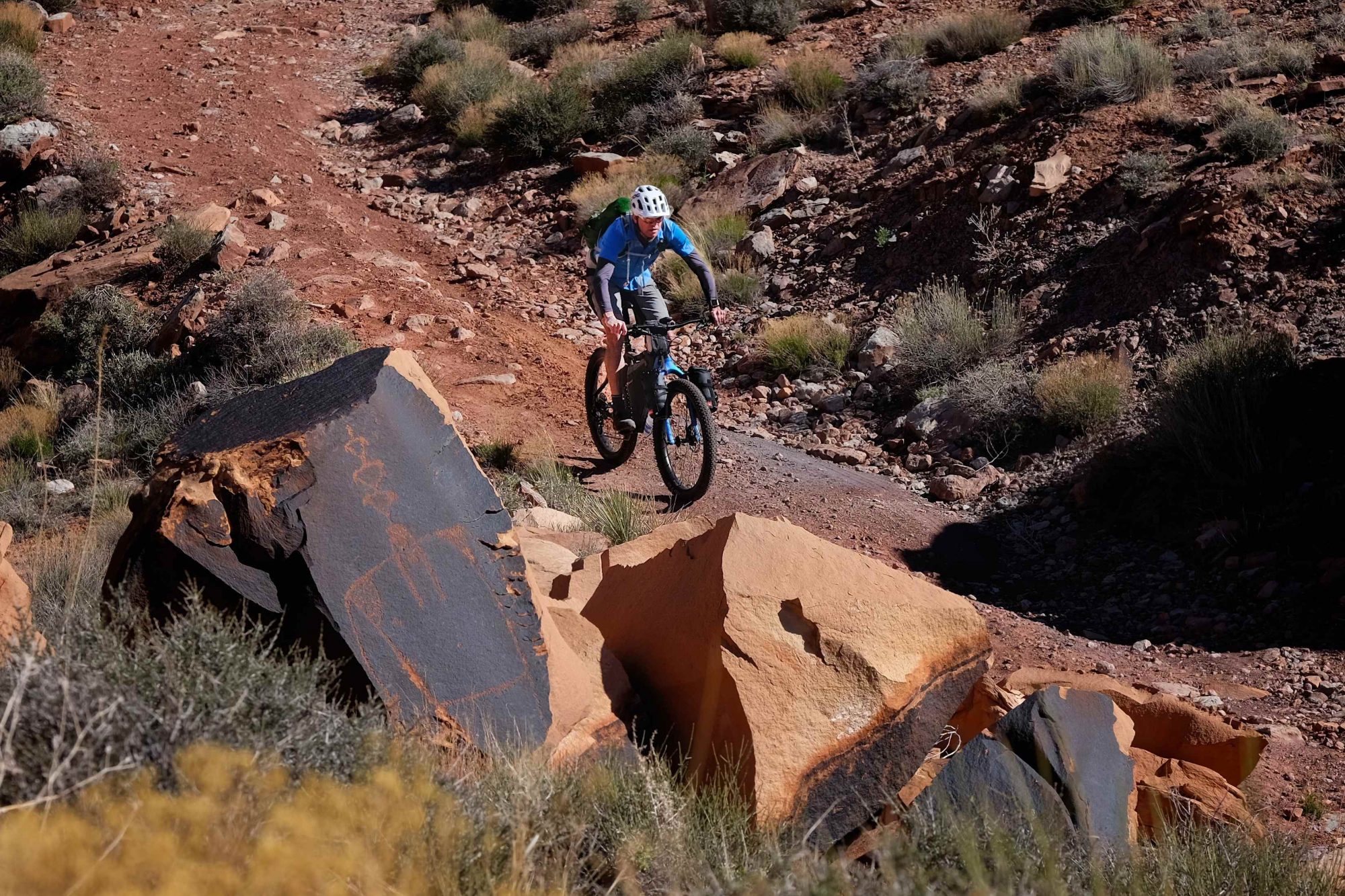 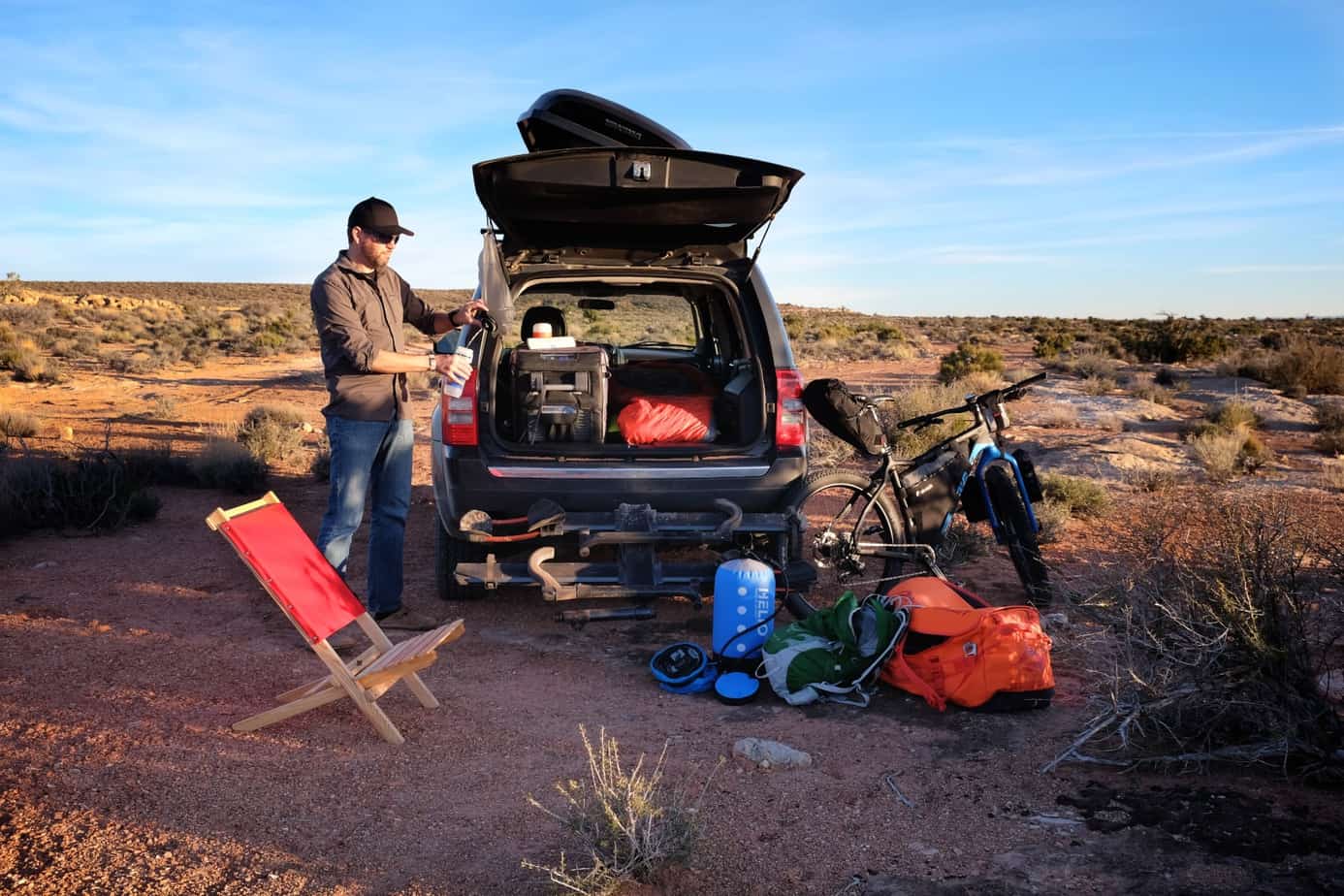 Safe at the car. Disaster averted. 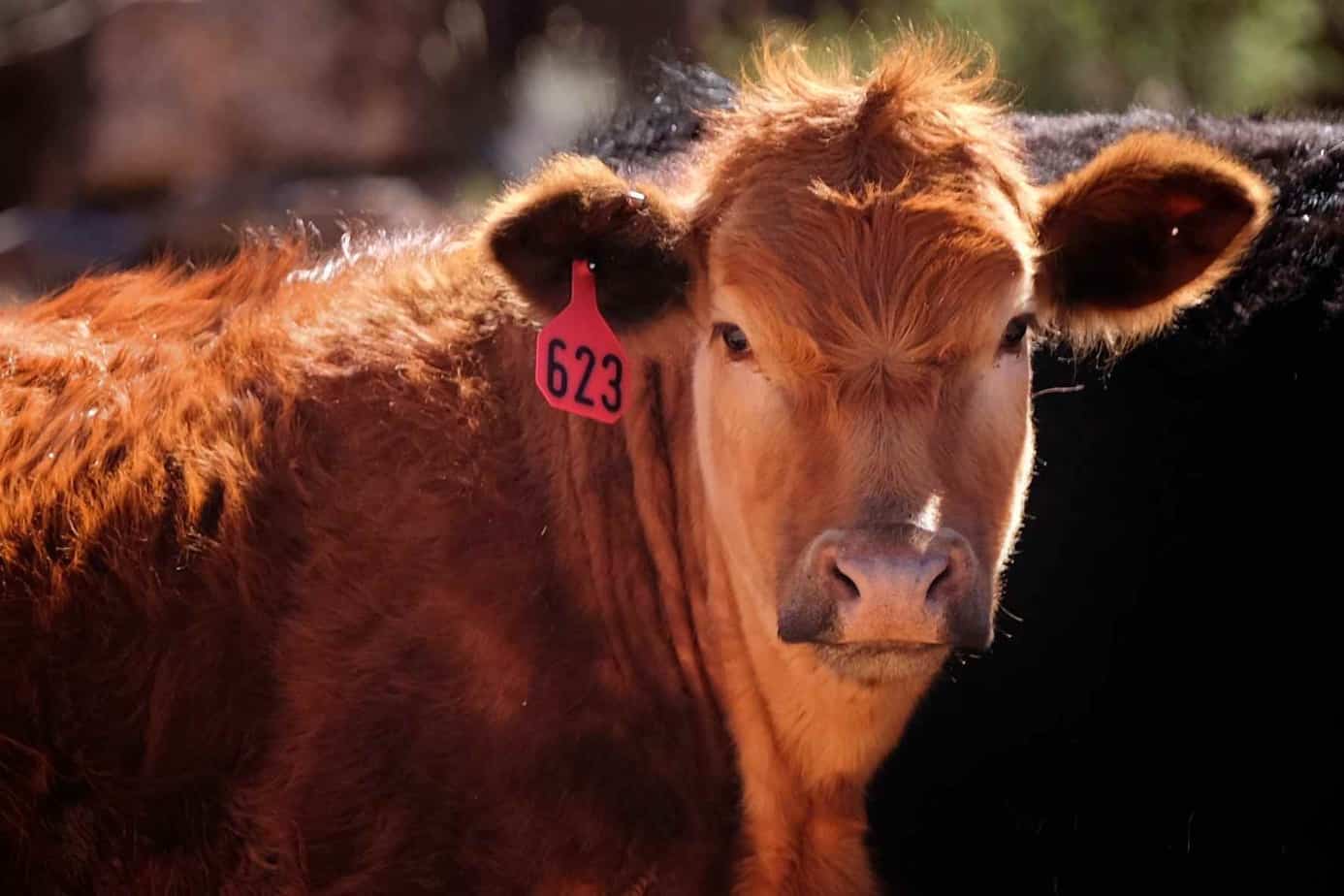 A2A Expedition: To Drag or Drop a Trailer, that is the Question. 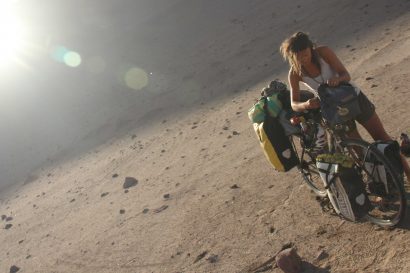 From the Southern Mountains to the Silver City of Potosi 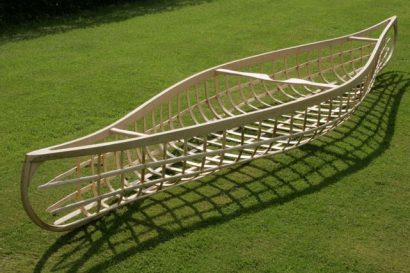 How to Build a Canvas Canoe, Jon’s Bushcraft 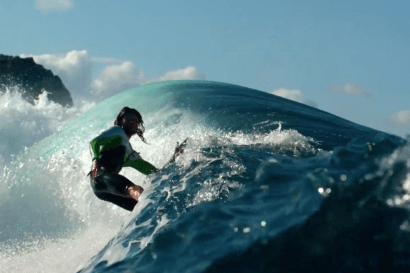 Surfing at 1,000 Frames Per Second