Located in Eastern Québec and bordered by the Gulf of Saint Lawrence and the Chaleur Bay, the Gaspé Peninsula (or sometimes simply called “Gaspésie”) is one of Québec’s most popular destinations.

Most travelers will want to make the traditional 885 kilometers loop by driving clockwise or counterclockwise on Route 132. Either direction will take you along a scenic road between sea and mountains. However, driving counterclockwise will make it easier and safer for you to stop at the numerous lookouts on the way.

Since it was my second trip to the area, I decided to travel mostly inland through the Chic-Chocs mountain range of the Appalachians. While the coastal scenery is hard to beat, it’s the mountains that were particularly calling my name during my first visit.

Technically it’s not part of the Gaspé Peninsula, but Bic National Park is located on the St. Lawrence estuary along Route 132. Whenever I leave from Ottawa to explore the Maritime provinces, Bic is my first stop for the night. As a Maritimer, the park’s fresh sea air makes me feel like I am at home. Bic is one of SEPAQ’s smallest parks and can be easily explored via sea kayaking or by hiking some of 25 kilometers of laid-out trails (among other activities available year-round). What’s more, Bic is a great location to observe marine wildlife and watch the sunset. 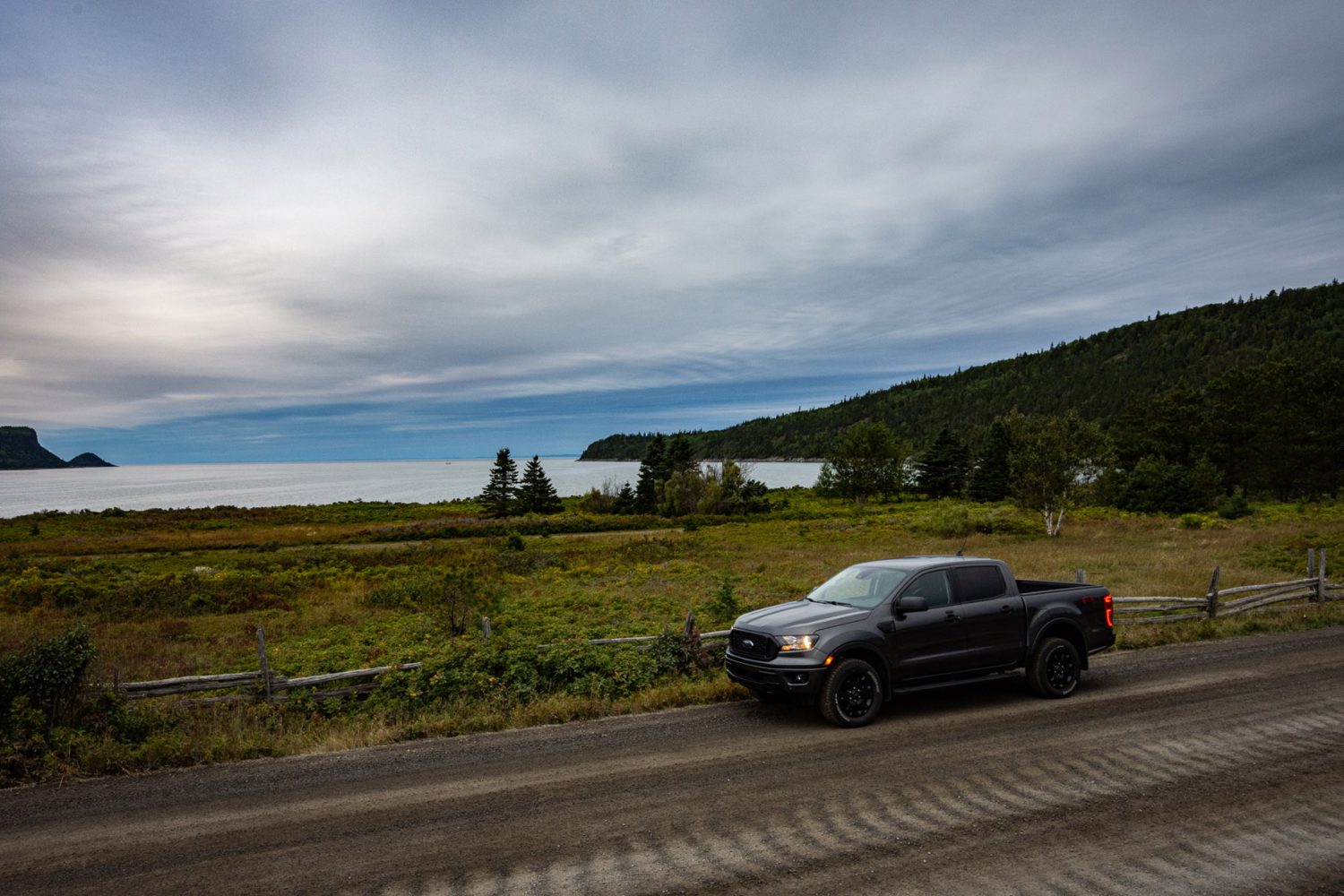 Located at the heart of the Gaspé Peninsula, this park let you get close and personal with two mountain ranges: the Chic-Chocs and the McGerrigle. Those mountains have more than 25 peaks reaching over 1000 meters. Set up camp at the Cascapédia lake campground for a few days and go explore the many available hiking trails within the park’s limit.

For an easy hike of only 2.6 kilometers (round trip), try the Lac-aux-Américains for a stunning view once you reach the lake. 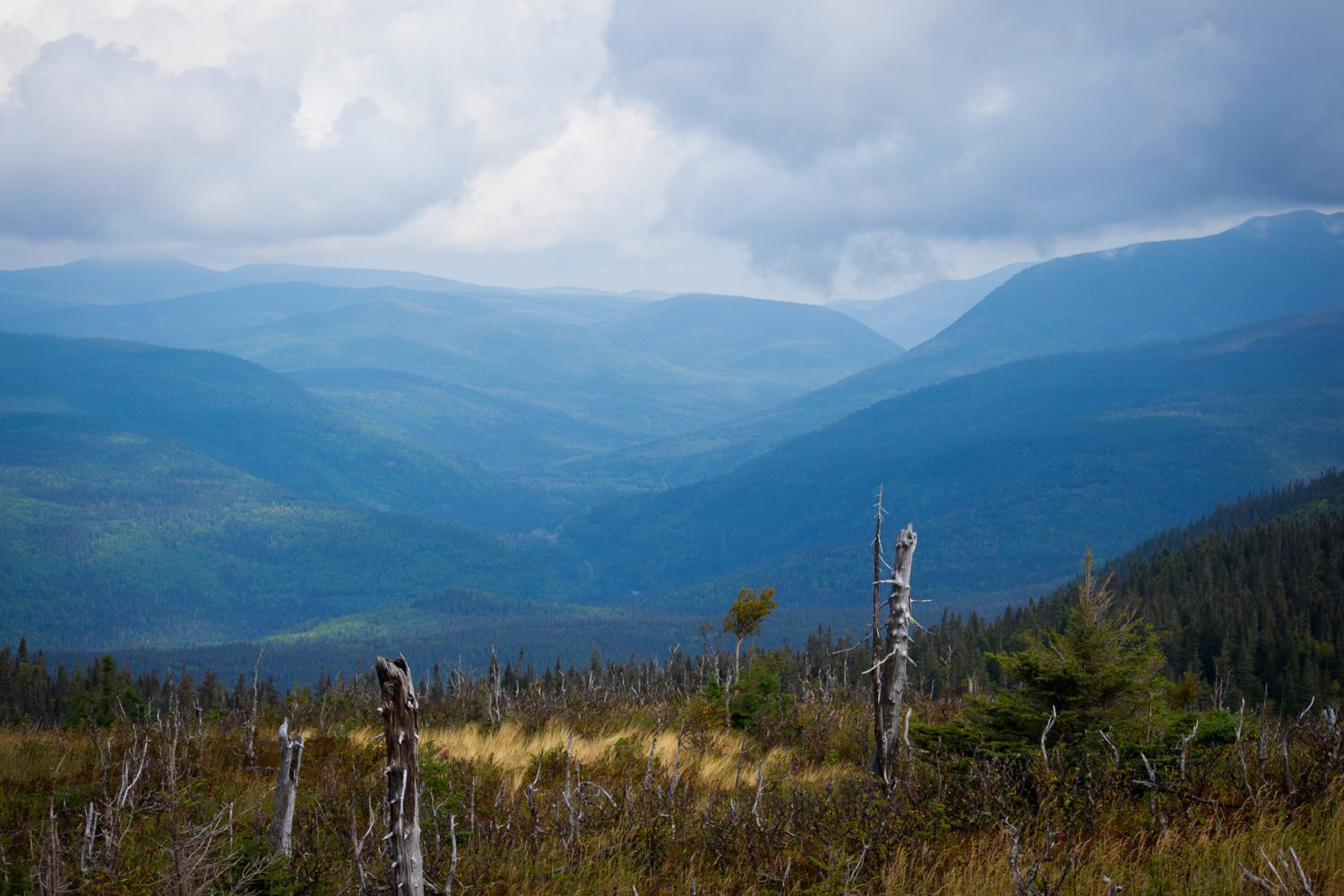 For the best chance to observe the only herd of caribou located south of the St. Lawrence River, you’ll want to hike to the summit of Mont Jacques-Cartier. At 1270 meters, this is the park’s highest peak and the second highest in Québec. The trail is 8.2 km (round trip) and it is rated difficult with an elevation of 465 meters.

The Gîte du Mont-Albert is a four-star hotel managed by SEPAQ and it’s been welcoming tourists since 1950. Every room comes with a view of Mont-Albert. This hotel is part of the park’s experience, so you should definitely stay at least one night in one of its cozy rooms. I also recommend that you have dinner at the hotel’s restaurant for an amazing culinary experience.

Created in 1970, Forillon National Park is Québec’s first national park managed by Parks Canada. Set up camp at one of its three front-country campgrounds: Petit-Gaspé, Des-Rosiers, or at Cap-Bon-Ami. Then put on your hiking boots to explore the many trails available in the area, some of which are part of the International Appalachian Trail (IAT). 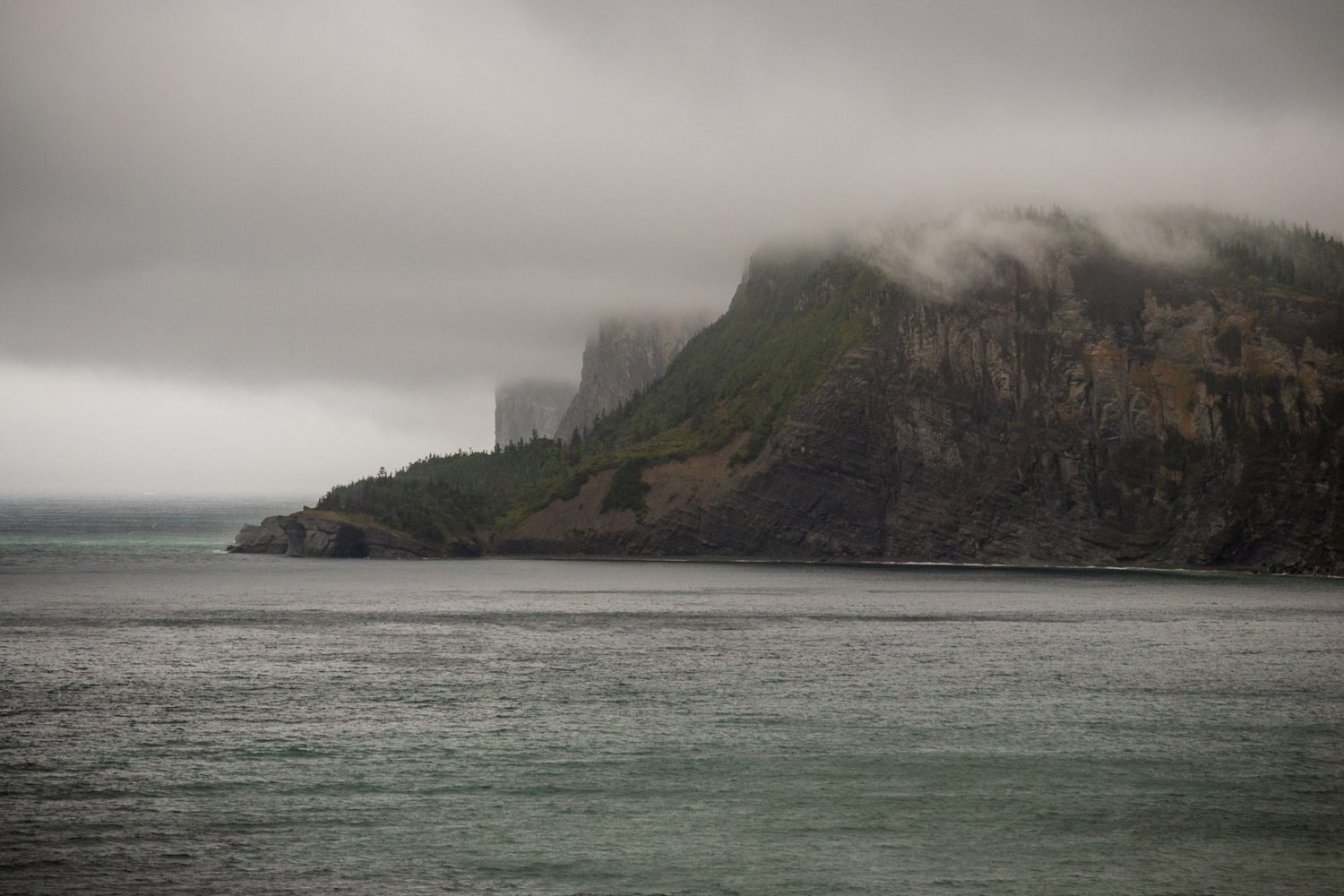 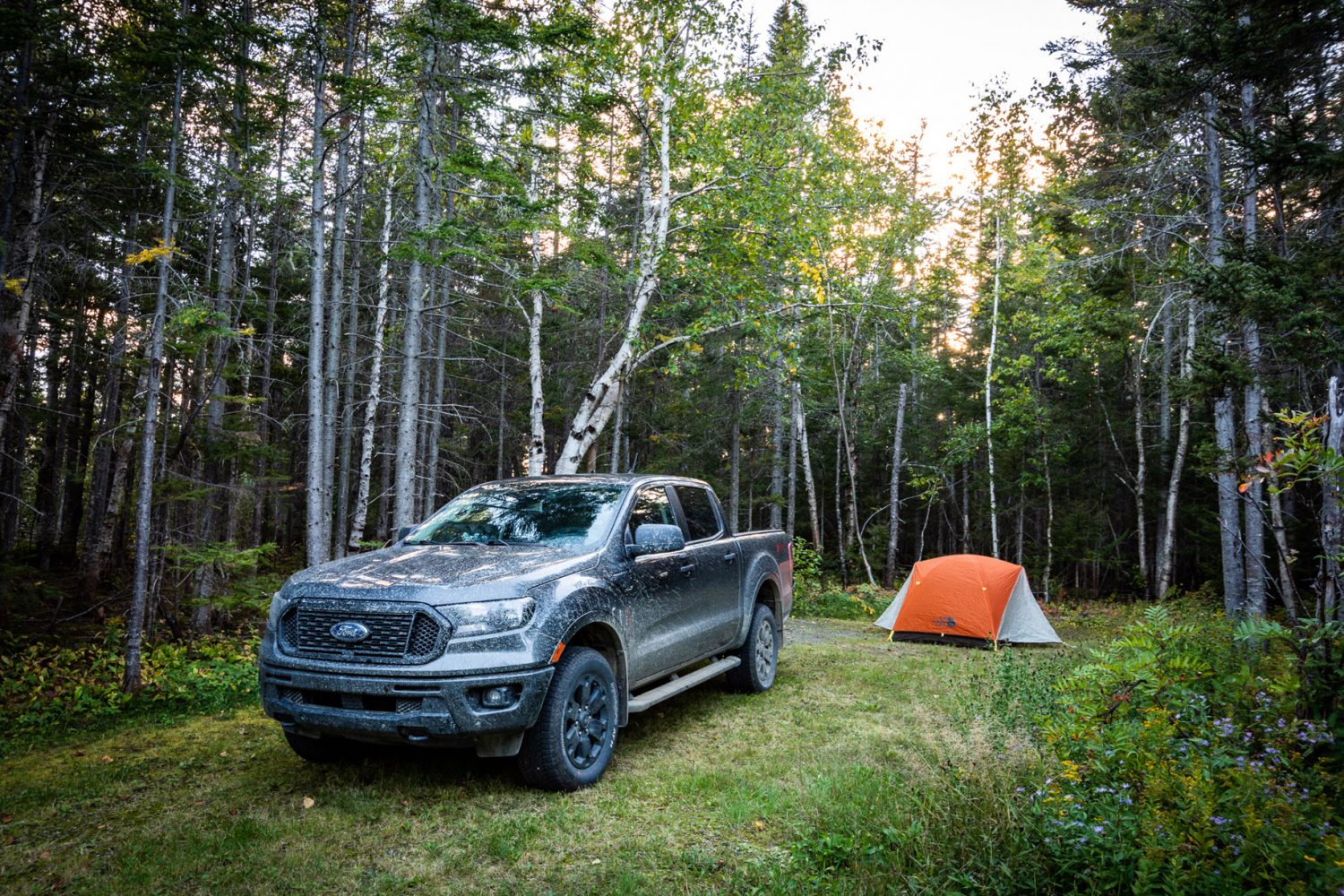 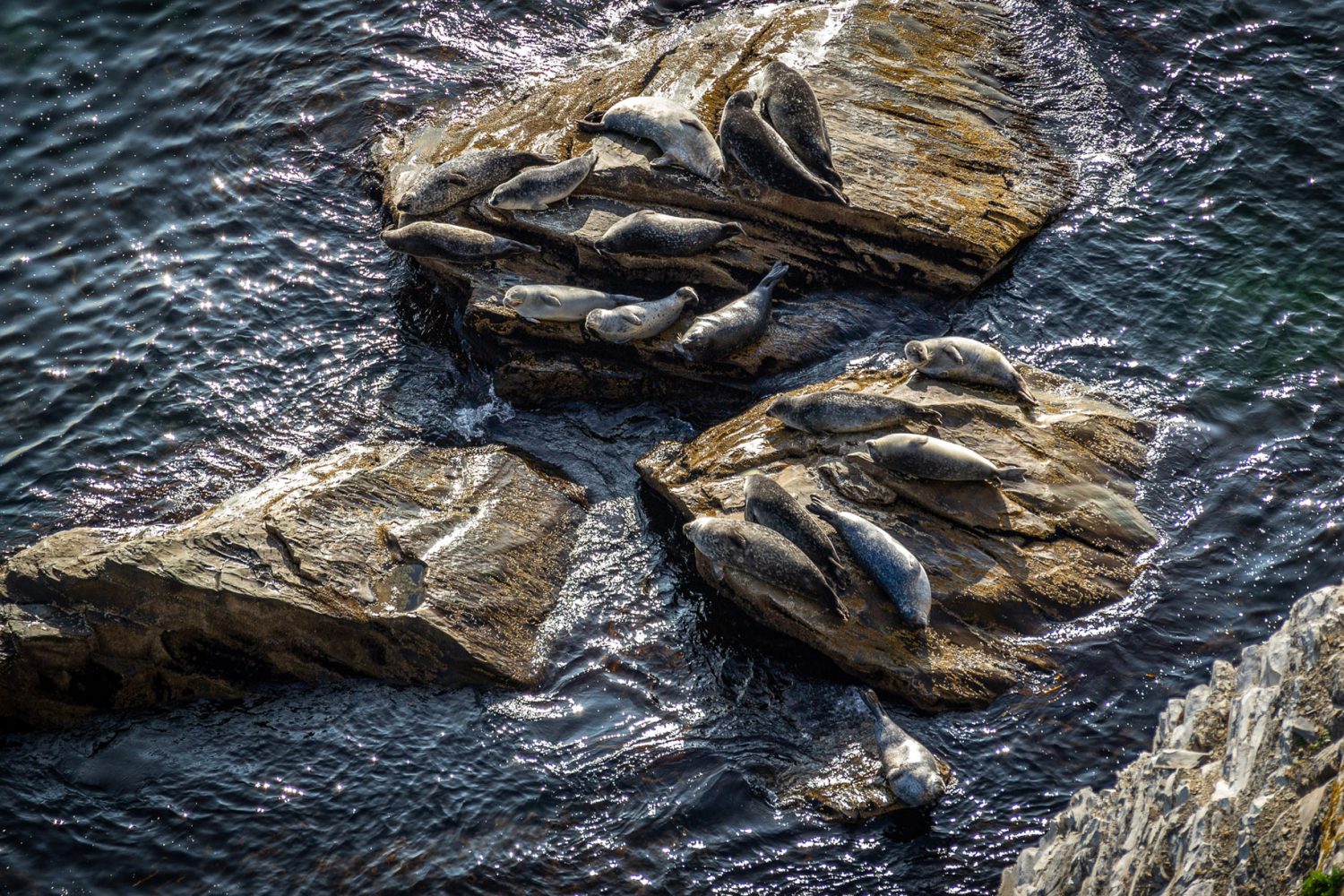 I recommend that you hike the 8 kilometers (round trip) the Les Graves trail to Cap-Gaspé (Land’s End). At the end is where the Appalachians finally disappear in the Atlantic Ocean before re-emerging in Newfoundland. 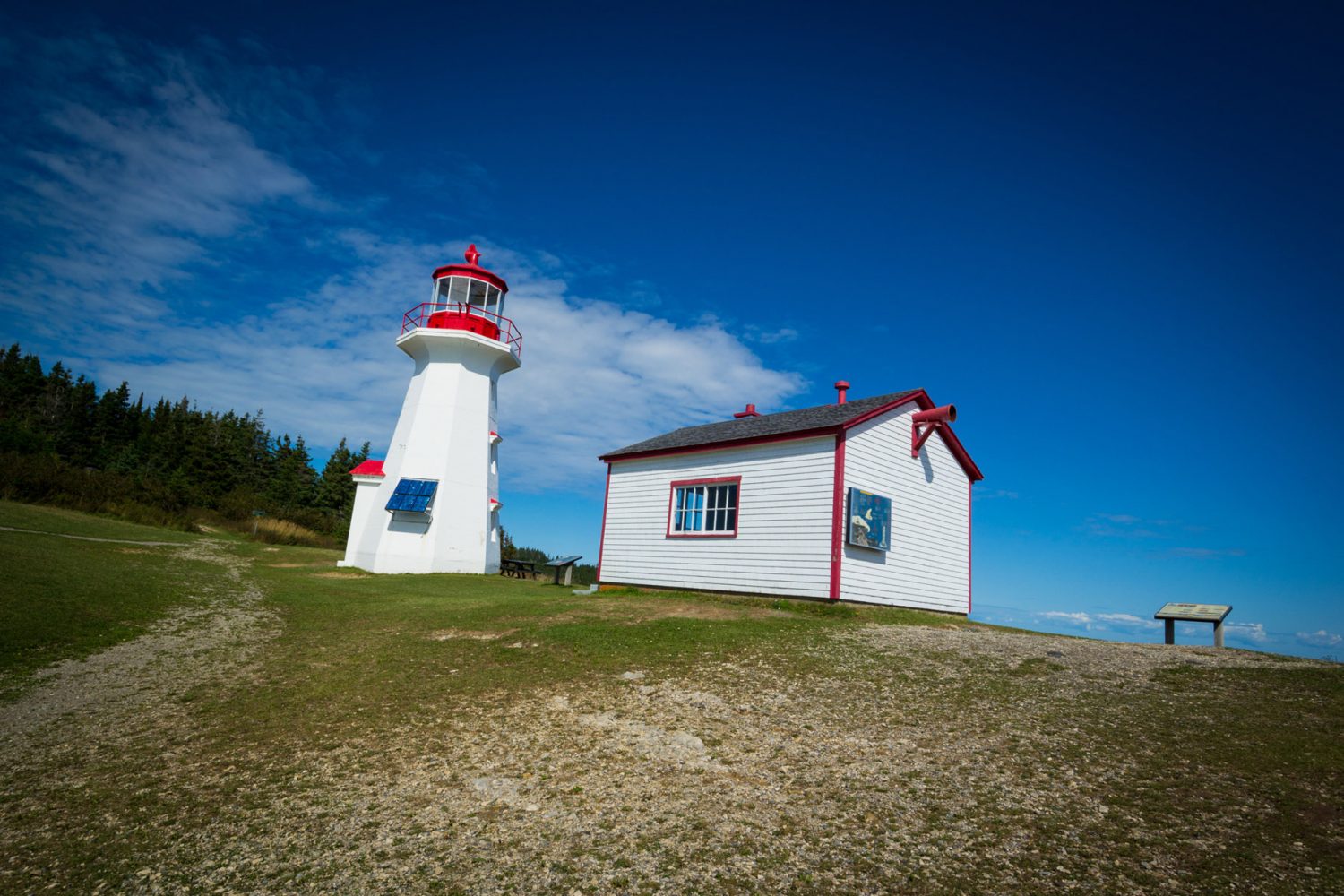 For the best view of Land’s end, hike up to Mont Saint-Alban’s lookout tower (283 meters). There are two routes to the tower, but the south trail is easier. On a clear day, you can even see the Percé Rock in the distance. 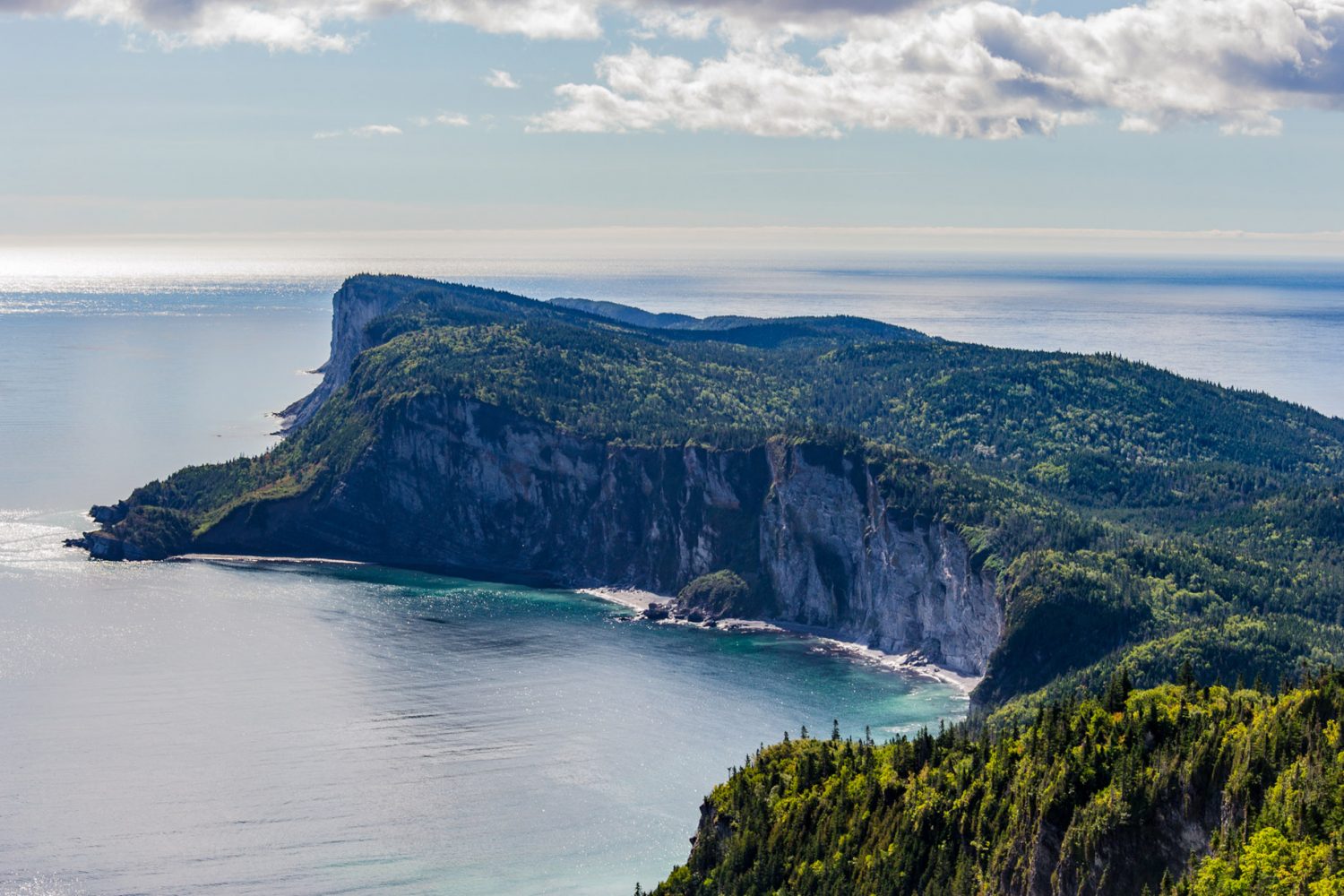 Located on Route 138 just north of Forillon National Park’s border, Canada’s highest lighthouse stands tall at 34 meters. The lighthouse has been built between 1853 and 1858. During the tourist season, you can book a guided tour to visit the lighthouse and learn about its fascinating history. 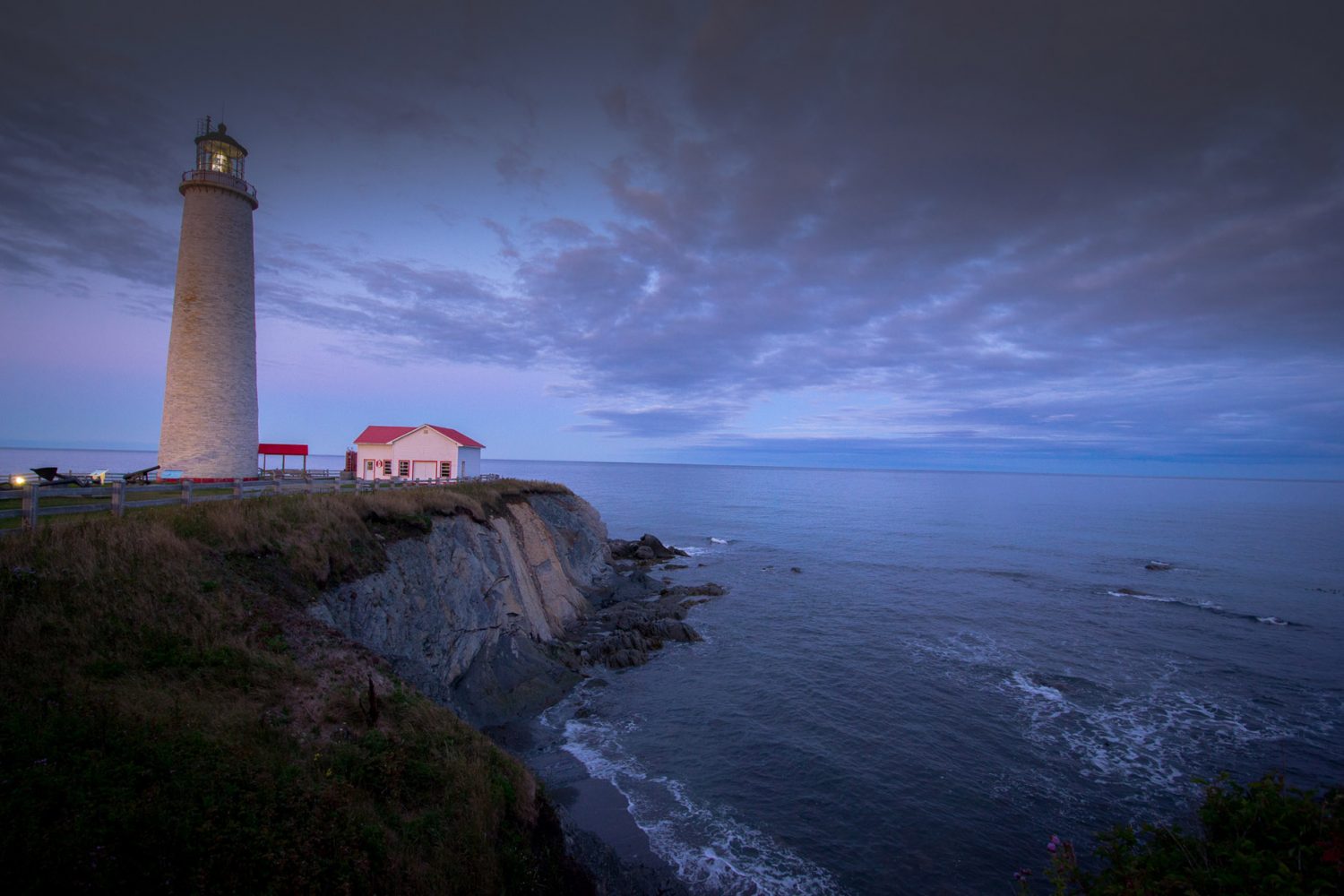 The famous Percé Rock makes an impressive sight. This limestone formation only has one arche remaining today, but it may have had as much as four arches many years ago.

Book a boat trip to Île Bonaventure via a local tour operator and go observe the world’s most accessible northern gannet colony. As you get closer to the island, look back at the Percé Rock on your left. From this new angle, you’ll find that it looks like a horse drinking into the water. Once on the island, you’ll have access to four hiking trails. I recommend that you hike the Les Colonies trail; it’s the easiest one (5.6 kilometers round trip) that will get you to the gannet colony. If you’re lucky, you may also encounter one of the island’s red foxes sunbathing on the trail.

When I first visited Percé back in 2017, the Geopark’s suspended glass platform had just been opened to visitors. The platform has been fixed to the cliff of Mont Ste-Anne at 200 meters of altitude. Remove your shoes and walk over the glass platform at its end to enjoy a great view of the Percé area, and you’ll also experience the weird feeling of walking over the treetops as you look down. If that’s not enough to raise your heartbeat, there’s also a 230 meters zip line that starts from the platform. 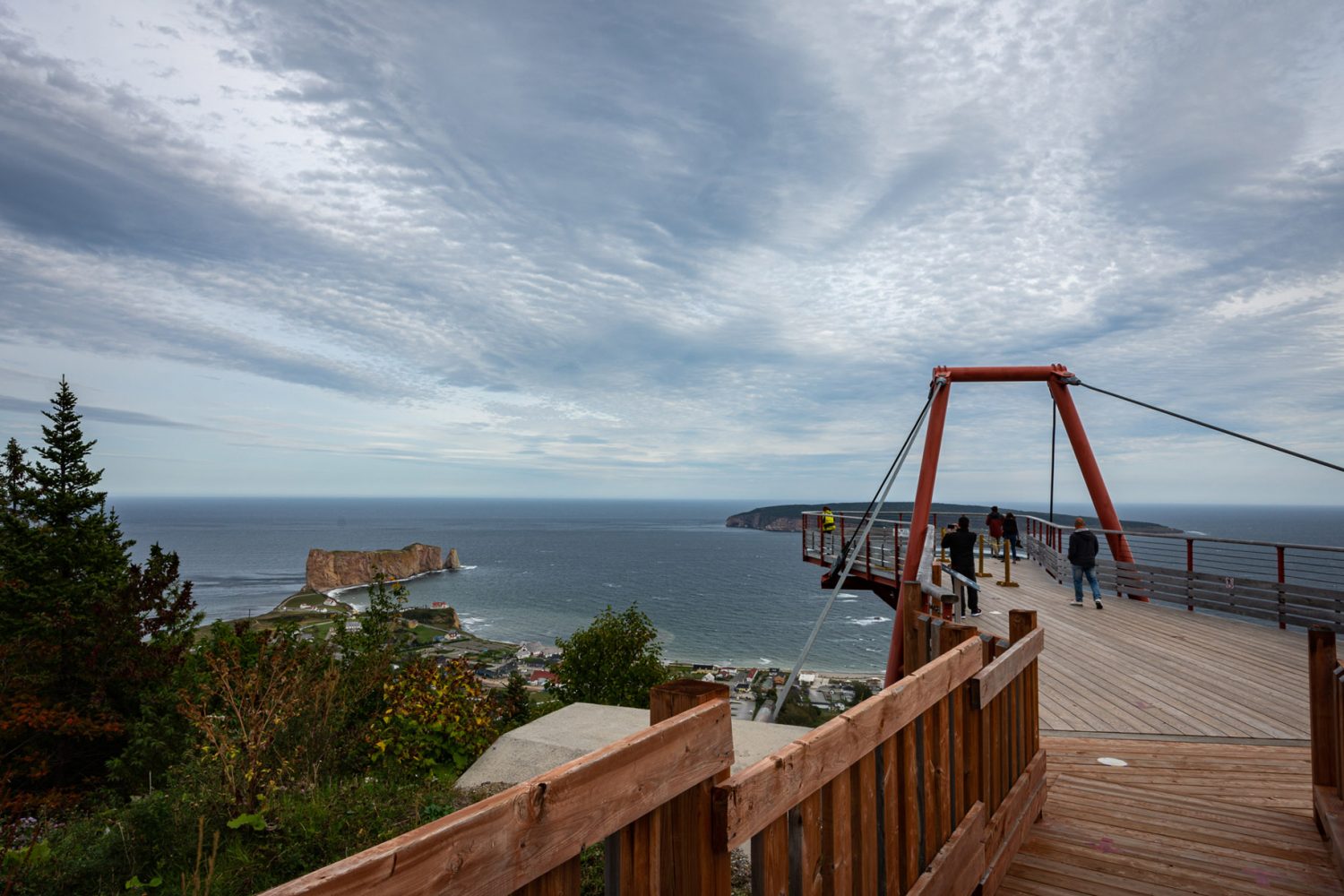 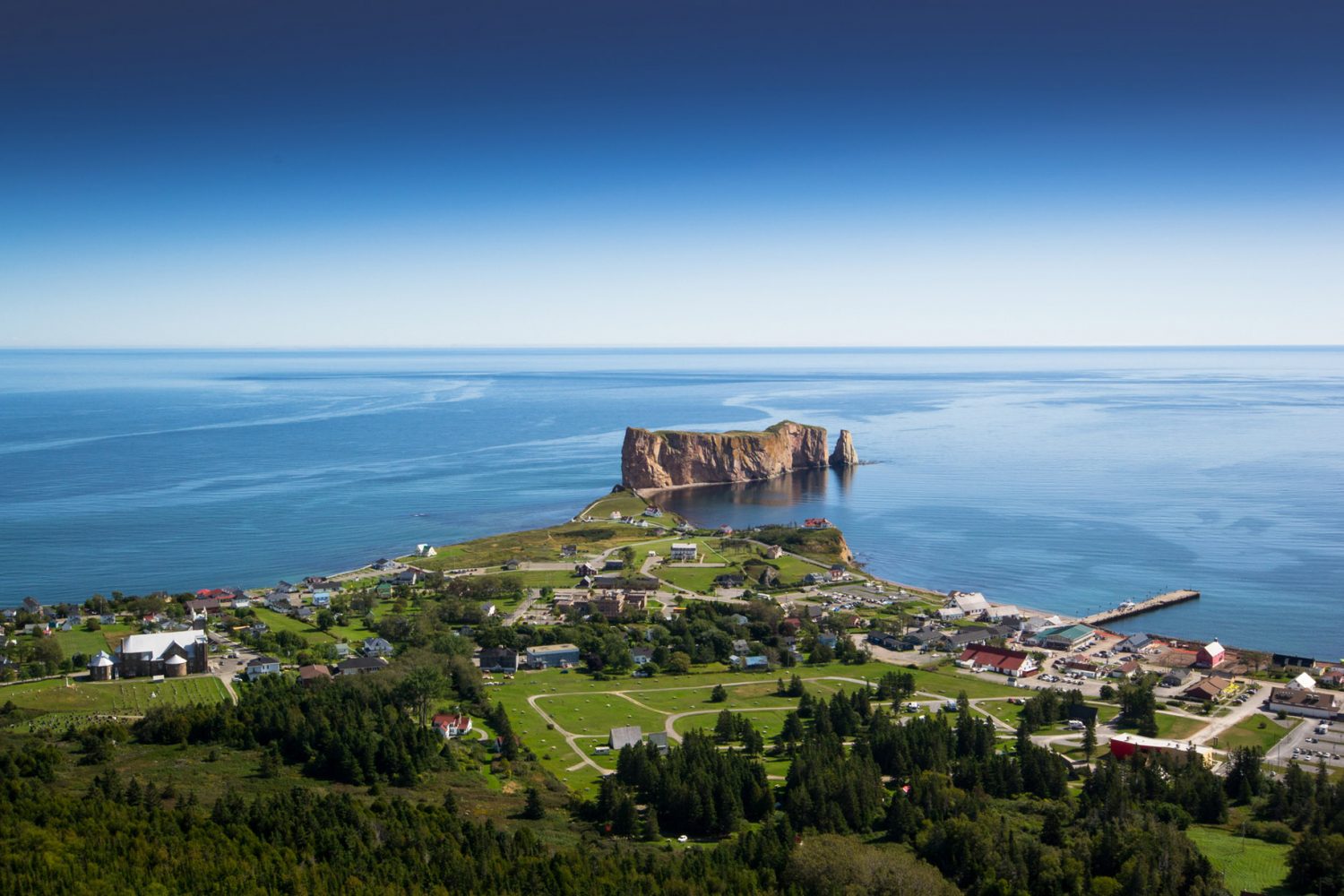 The Geopark offers many other experiences, like the Tektonik multimedia adventure where you’ll learn about the area’s geography and history. There are also 18 kilometers of hiking trails available in the area.

Traveling through the Chic-Chocs: my itinerary

Leaving from Ottawa, I first stopped at Bic National Park on Route 132. From that point, I drove East to Route 299, the entrance road to Gaspésie National Park. From the 299, I took Route du Lac-Sainte-Anne (a dirt road) to reach Route 198 in the direction of Murdochville. I then kept driving East on the 198 and exited at Gaspé. From Gaspé, I drove South on the 132 to Percé. Returning from Percé, I backtracked on the 132 going North, following part of the counterclockwise itinerary.

Most of central Gaspésie is Crown Land. Thanks in part to former logging roads, the central trail network forms a huge mase in which one could easily get lost. Before I left on this trip, I plotted a few trails to explore using Backroad Mapbook’s layer on Gaia GPS. Of course, some of the trails turned out to be closed or had been reclaimed by nature, but one dirt road in particular that took me deep into the backcountry was the Montée de Corte-Réal. It starts on the tarmac in the Gaspé area and follows along the Dartmouth River, a salmon river. This dirt road links to many trails and some will definitely require that you switch into 4 Low. However, please be aware that water crossings are strictly prohibited in Québec; thus, you’ll find that some of the trails will be off-limit.

My only travel buddy on this trip was a 2020 Ford Ranger XLT 4X4 with the FX4 package. Redesigned for the model year 2019, the Ranger doesn’t see many significant changes for 2020. I had the opportunity to push it quite a bit when exploring Gaspésie’s dirt roads and I found it to be a solid platform for overland travel. However, its suspension can be a little bouncy, so I look forward to the new Tremor package as it should come with a better-tuned suspension. 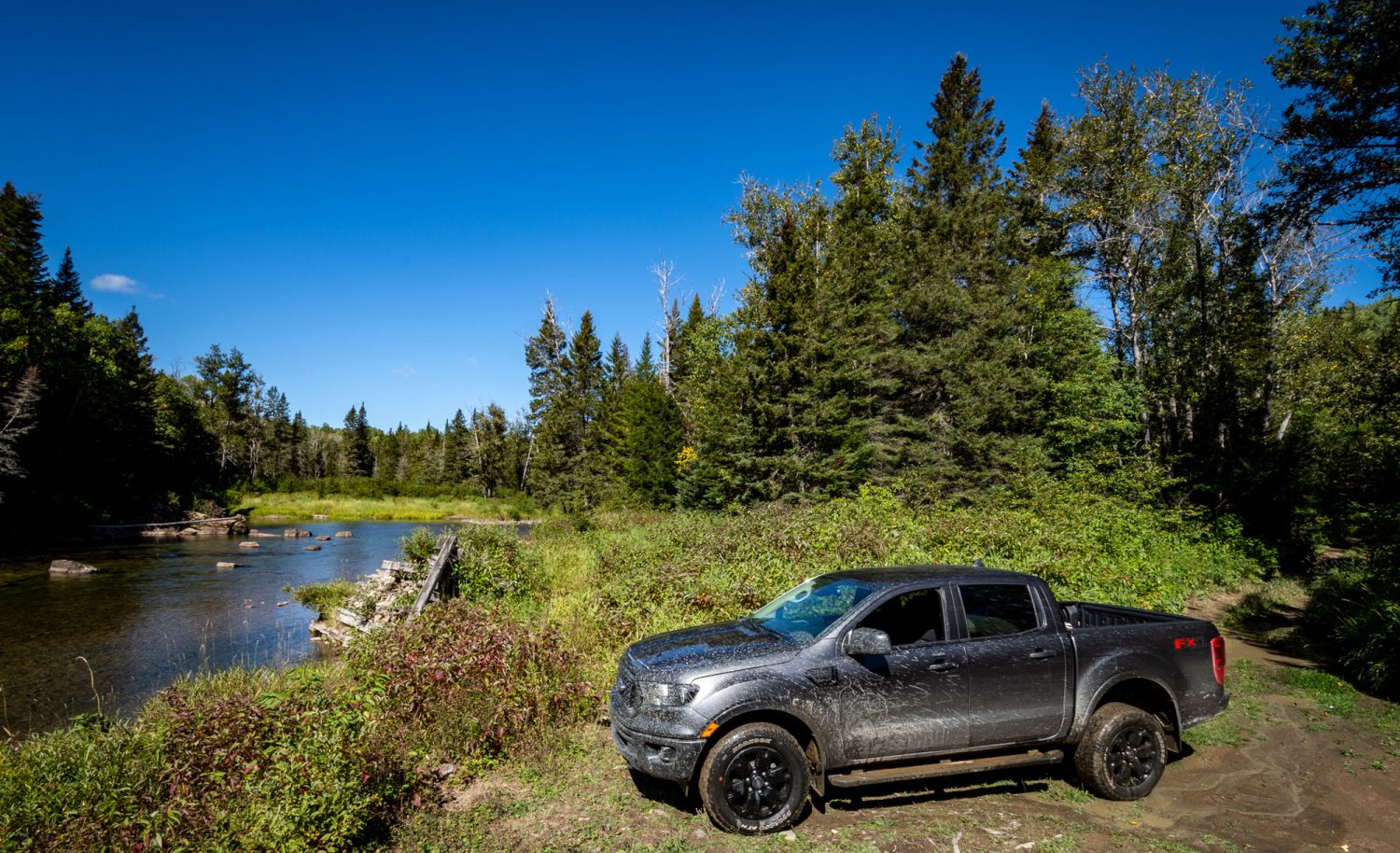 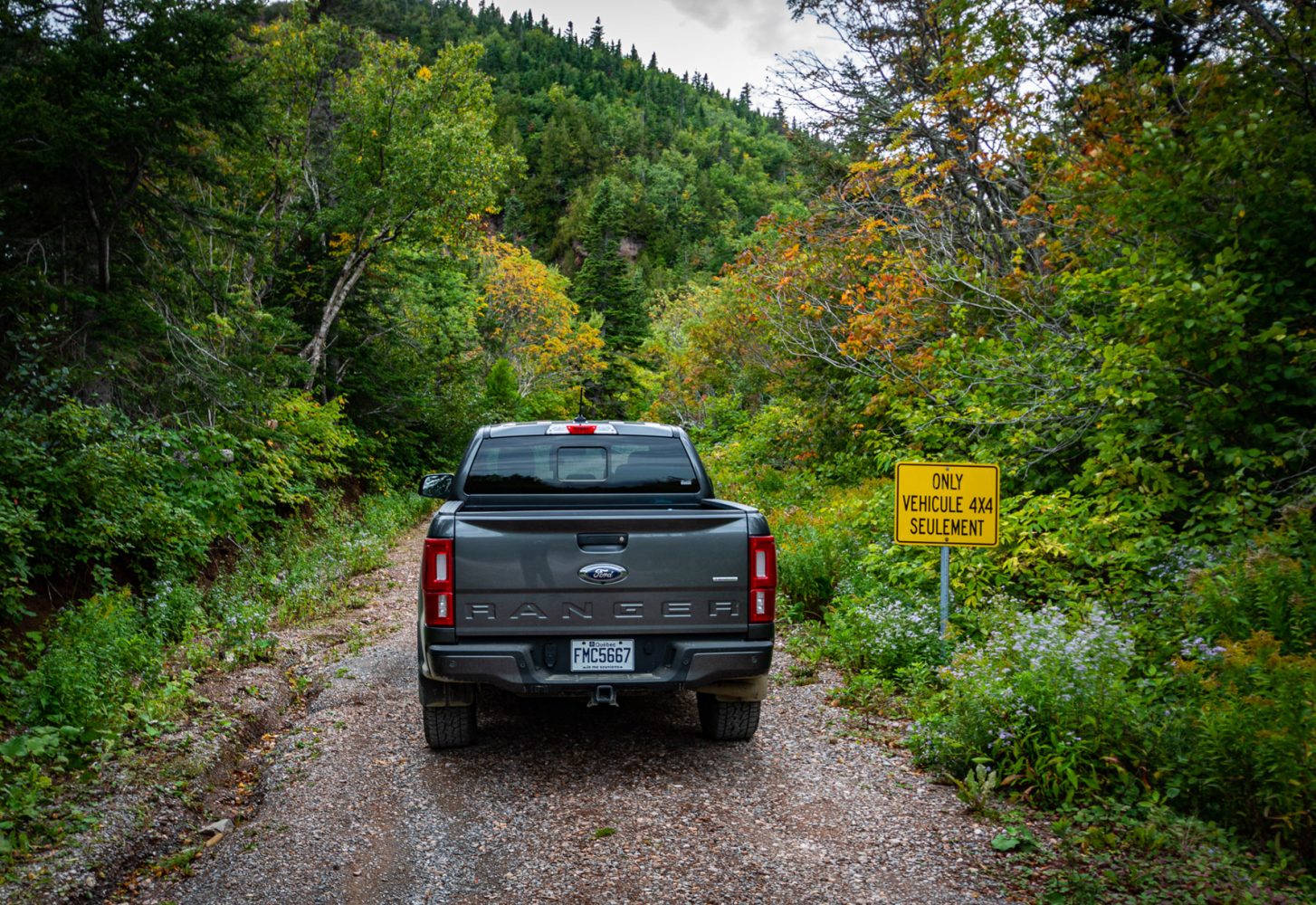 **COVID-19 special advice: verify current travel restrictions, like border closures before visiting. Local travel restrictions may be in place, and some accommodations, attractions, as well as some activities may be closed during the pandemic. For the most up-to-date information, visit https://www.quebec.ca/en/health/health-issues/a-z/2019-coronavirus/

For the must-see places in the area, get your free travel guide.

While there are no Backroad Mapbooks covering the Gaspé Peninsula, the company’s new web map as well as its layer on Gaia GPS does so. Due to the remoteness of central Gaspésie, I recommend that you bring a two-way satellite communication device with you if you plan to explore Gaspésie’s dirt roads–especially if you travel solo.

You can visit the area year-round, but if you go during the summer (especially during July and August), make sure to book all your reservations in advance. If you can, go in September just after Labour Day. The flies will be gone as well as the crowd of tourists, and the weather will still be nice enough. But if you leave a little later by the end of the month, you’ll be able to enjoy the fall colors, and the scenery will be even more breathtaking.

Born and raised on the east coast of New Brunswick and now located in Ottawa, Mathieu got his first taste for vehicle-based adventure travel when he was a teenager exploring on his ATV. With eastern Canada as his usual playground, he is an adept of slow travel and prefers to explore one area at a time. You can follow his adventures on Instagram @math_godin

Born and raised on the east coast of New Brunswick and now located in Ottawa, Mathieu got his first taste for vehicle-based adventure travel when he was a teenager exploring on his ATV. With eastern Canada as his usual playground, he is adept at slow travel and prefers to explore one area at a time. You can follow his adventures on Instagram @math_godin. 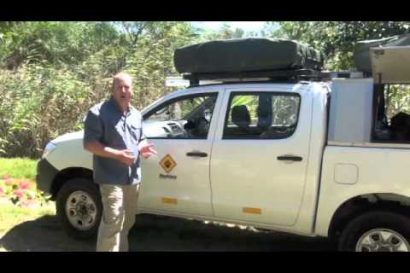 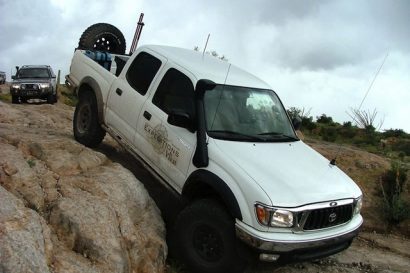 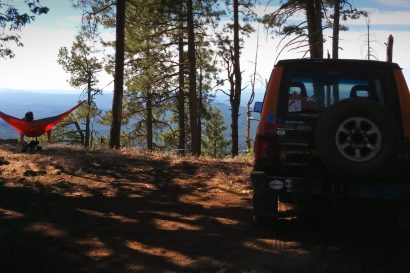