We weren’t 100 percent sure about the idea of just strolling into a small, local cemetery near Pátzcuaro, Michoacán, Mexico, during the week-long celebration of El Dia de los Muertos, but the spirit of the holiday overcame any uncertainties. After all, that’s why we had decided to skip seeing the Baja 1000, take a terrible 16-hour trucker ferry across the Gulf of California to mainland Mexico, and drive for three days to make it to this exact spot on this exact day. This spot that the US State Department warned to “reconsider travel, due to crime.” Just a day before, we had experienced the late-night street parties, traditional food served until 4:00 a.m., extreme costumes portraying the dead in the most stylish ways, chocolate skull truffles, impromptu parades, and dances from the people of each town around lake Pátzcuaro celebrating their ancestors. But that morning, we had driven out to the country a bit, down the winding roads that lead to small fishing villages near the lake’s inlets. Now we were with the locals and away from the touristy displays. 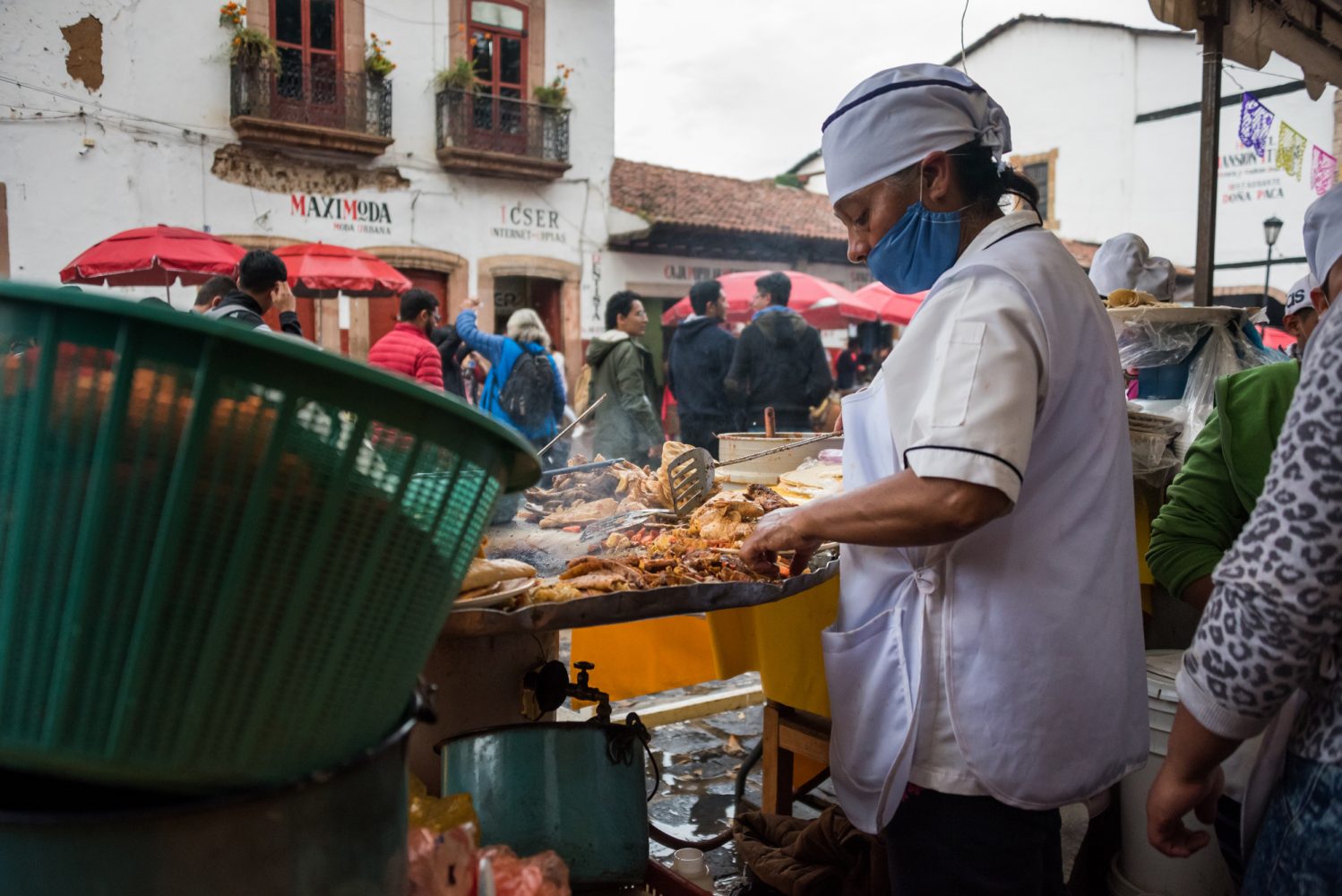 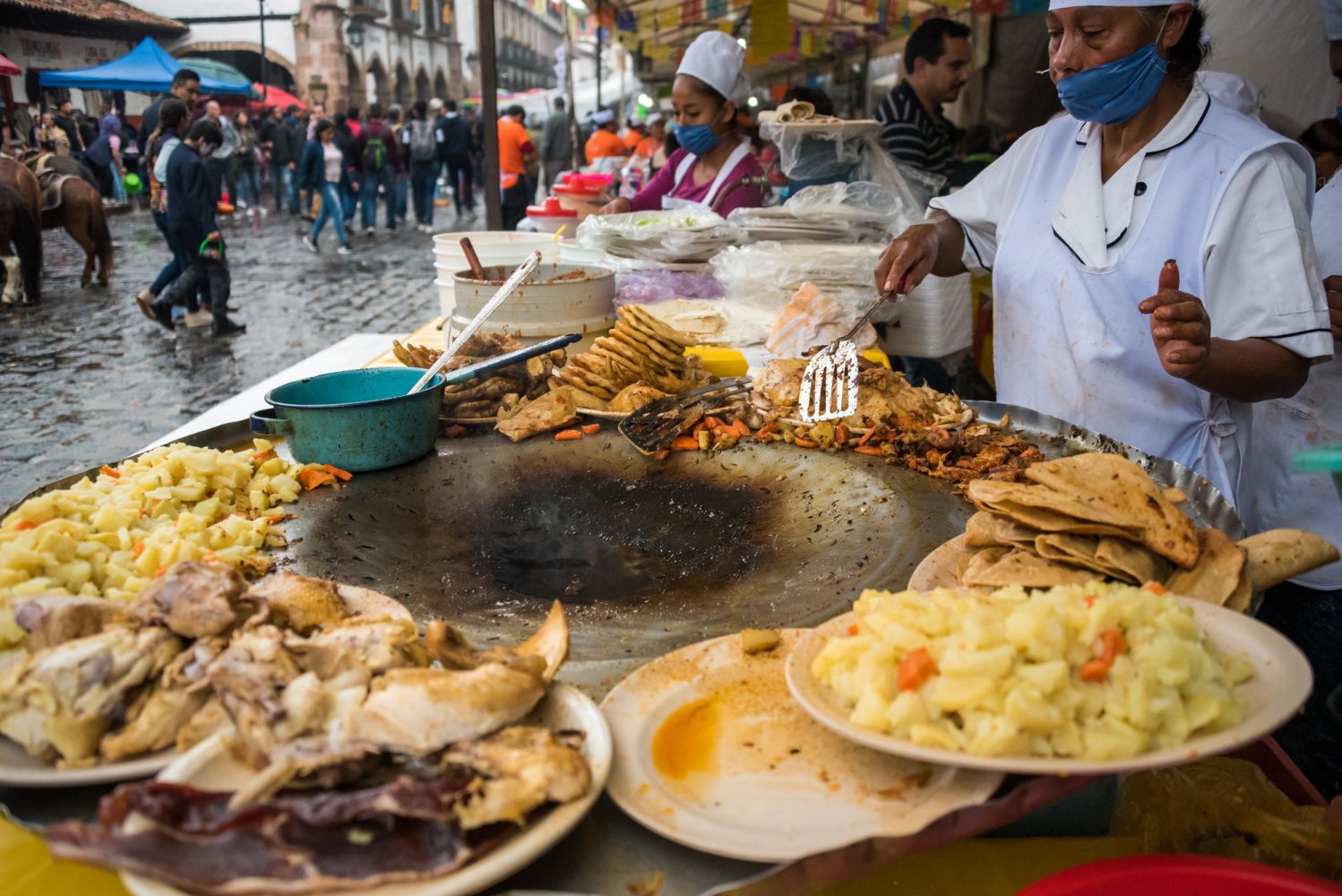 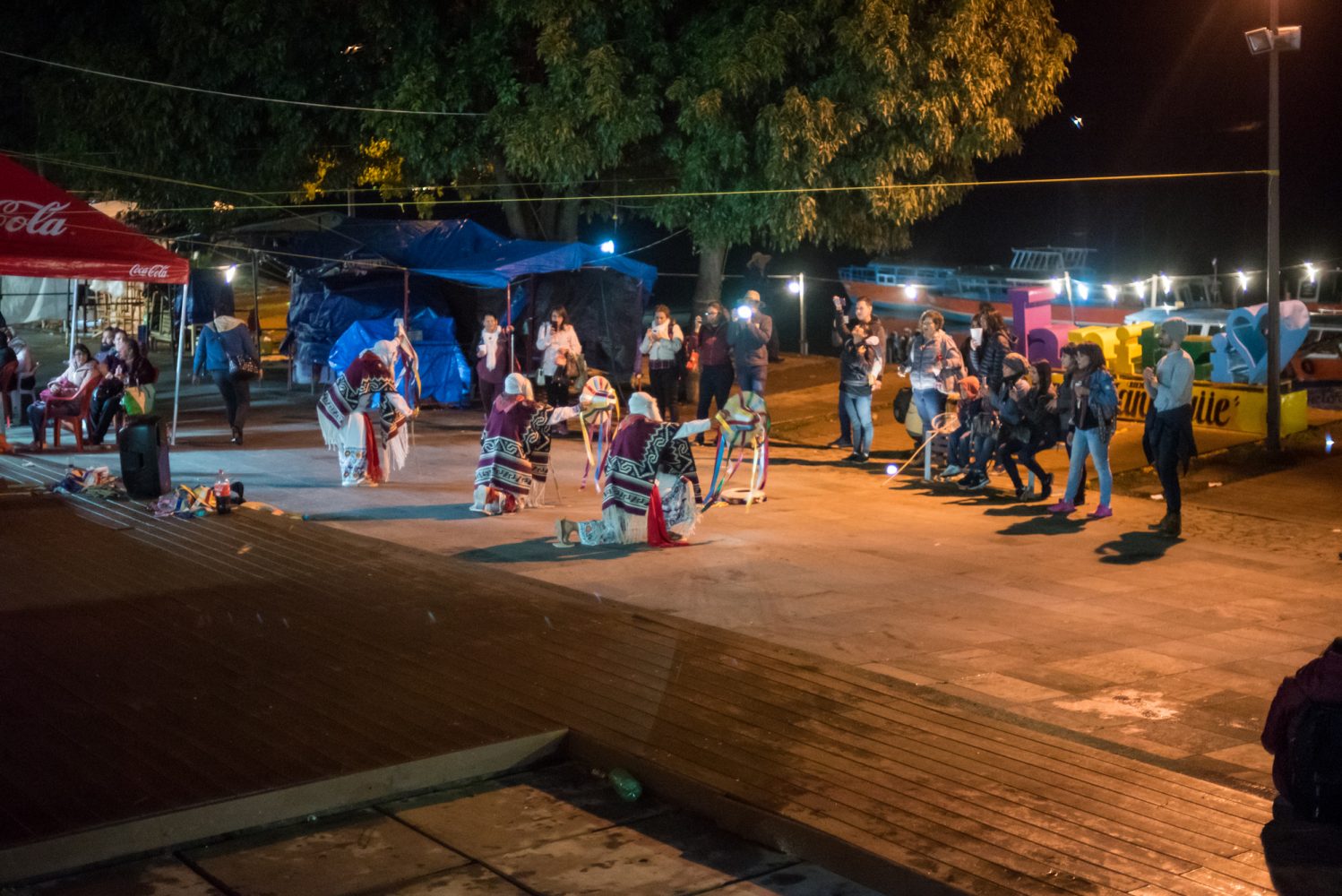 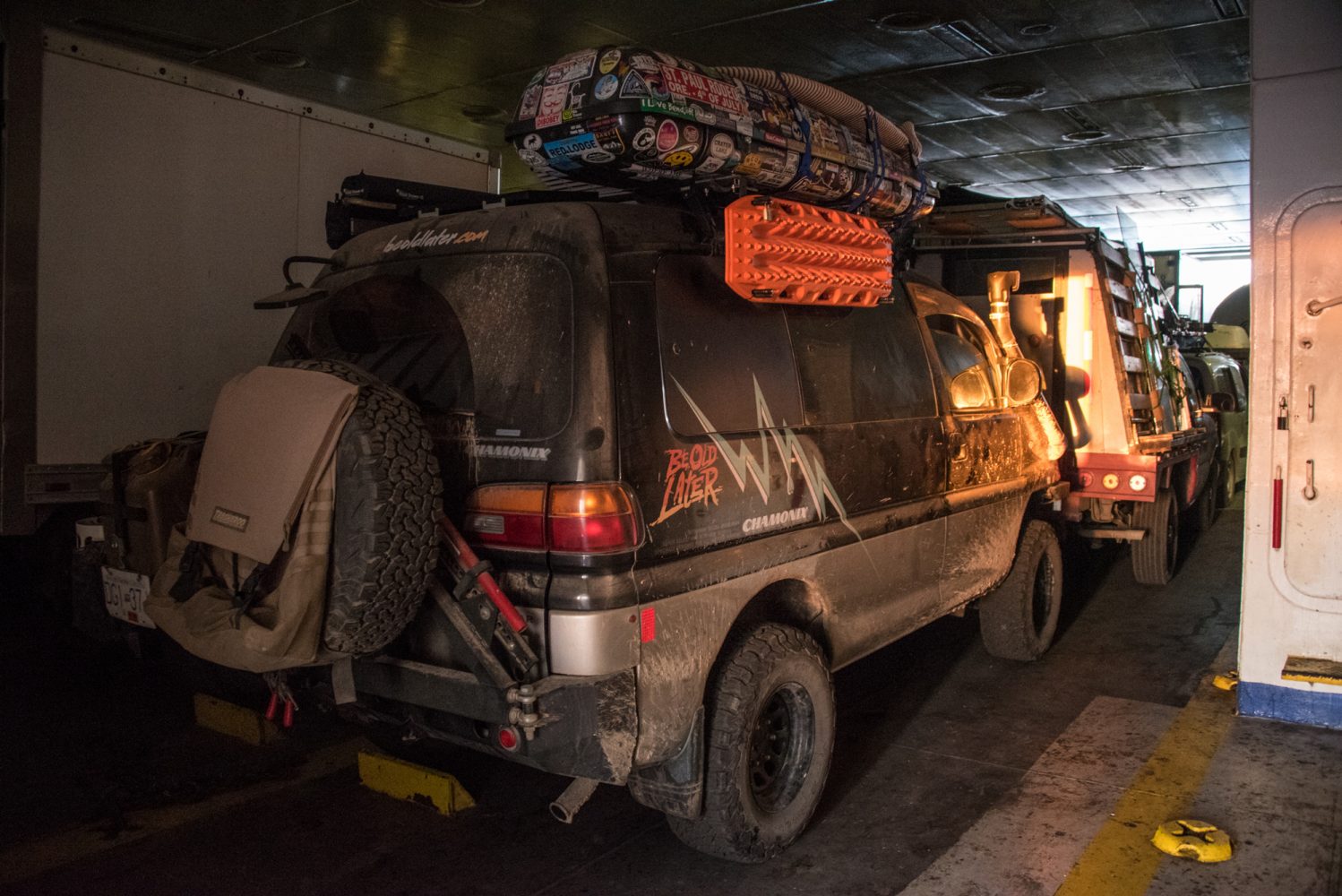 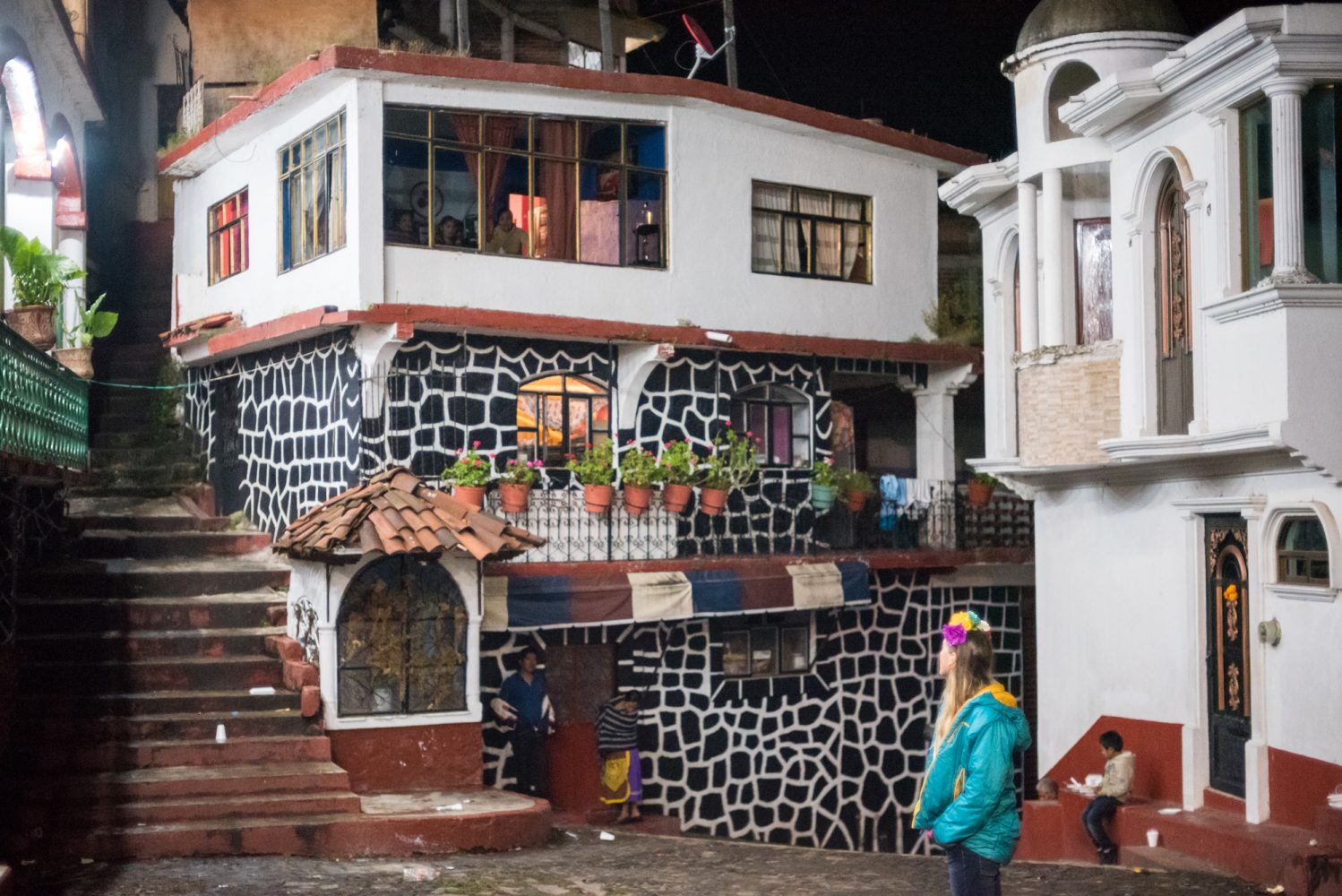 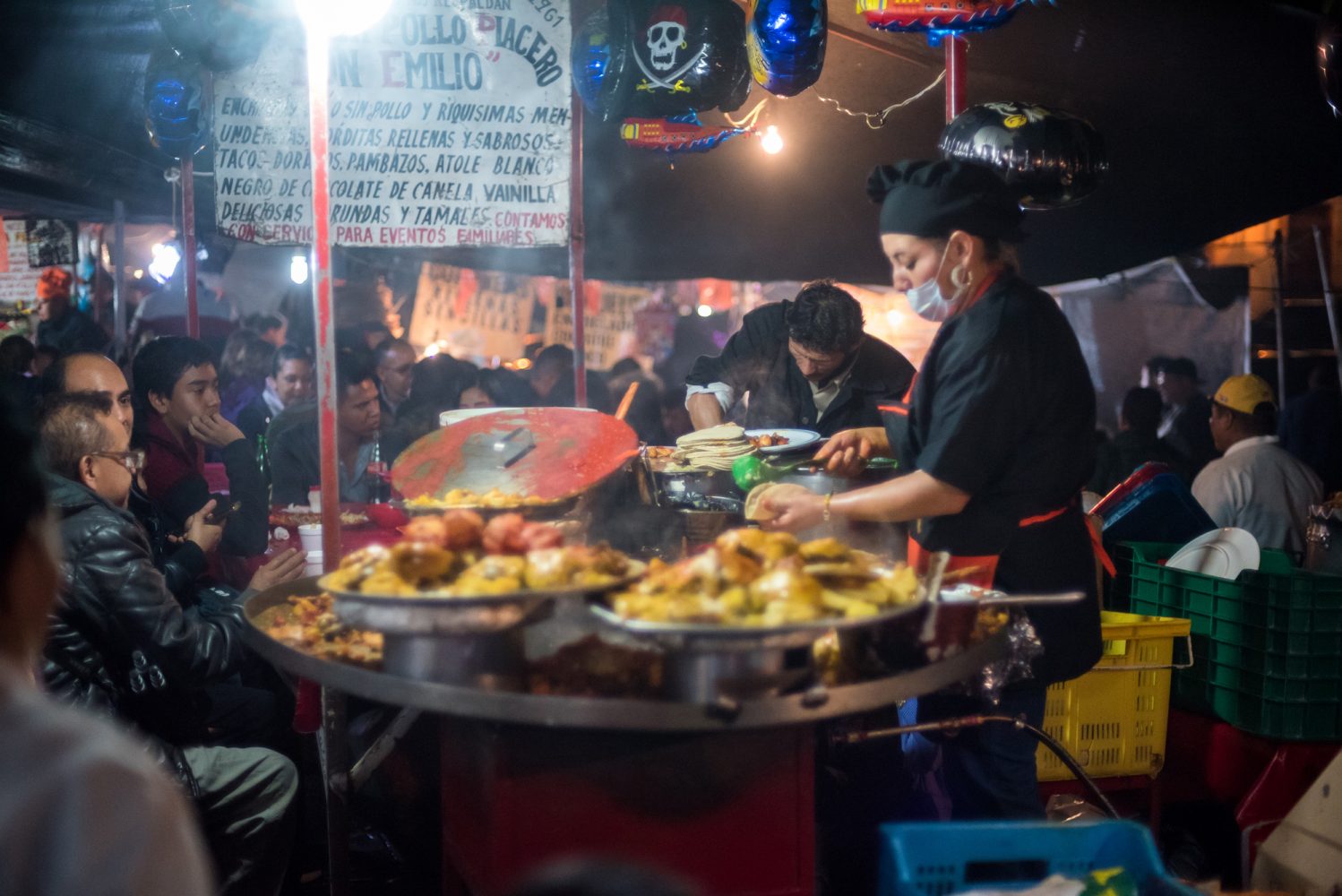 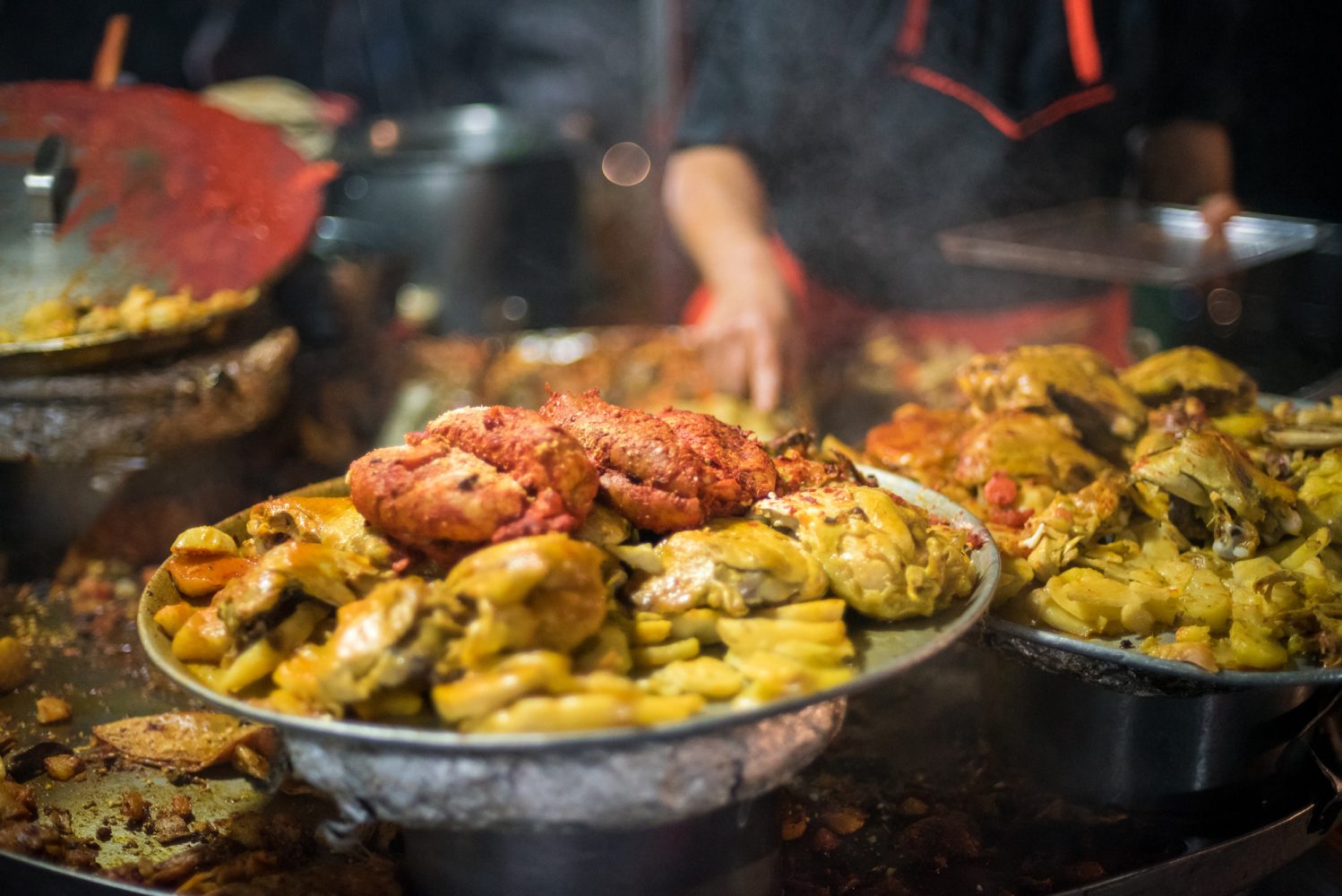 We parked across the street and headed over in our rain gear, trying to avoid the increasingly thick, muddy puddles. We cautiously opened the gate and walked into the small neighborhood cemetery with respectful curiosity and no eye contact. The gravestones were covered in traditional orange marigolds, bright-colored ribbons, and candles in glass lanterns. The offerings to the deceased were photographs, sugar skulls, handwritten letters soaked and smudged by the misty rain, and plenty of favorite foods melting into the grass. The cemetery had four corners, each with a tarp and 15 to 20 family members underneath; each group honored their departed with tables of food and drink. 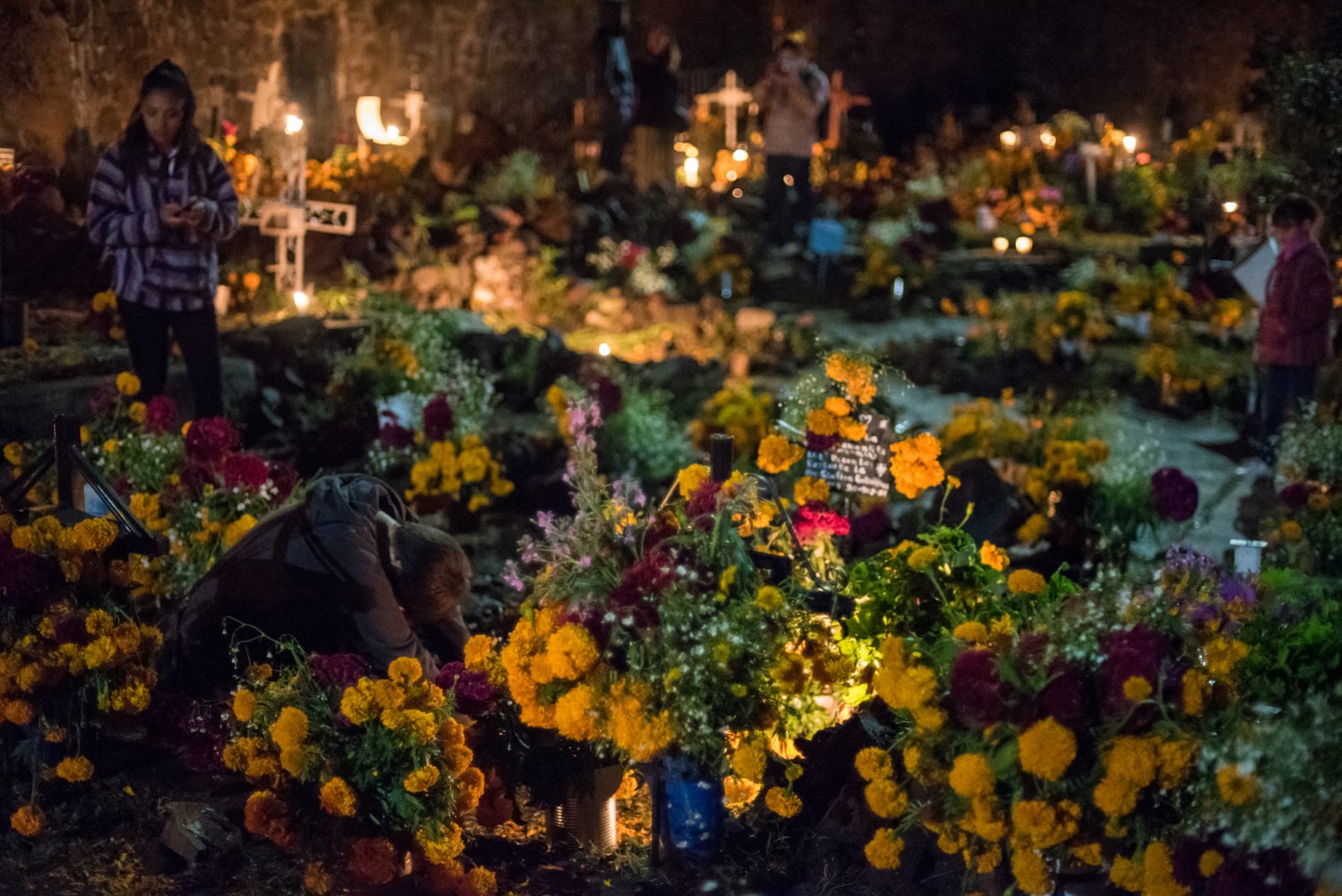 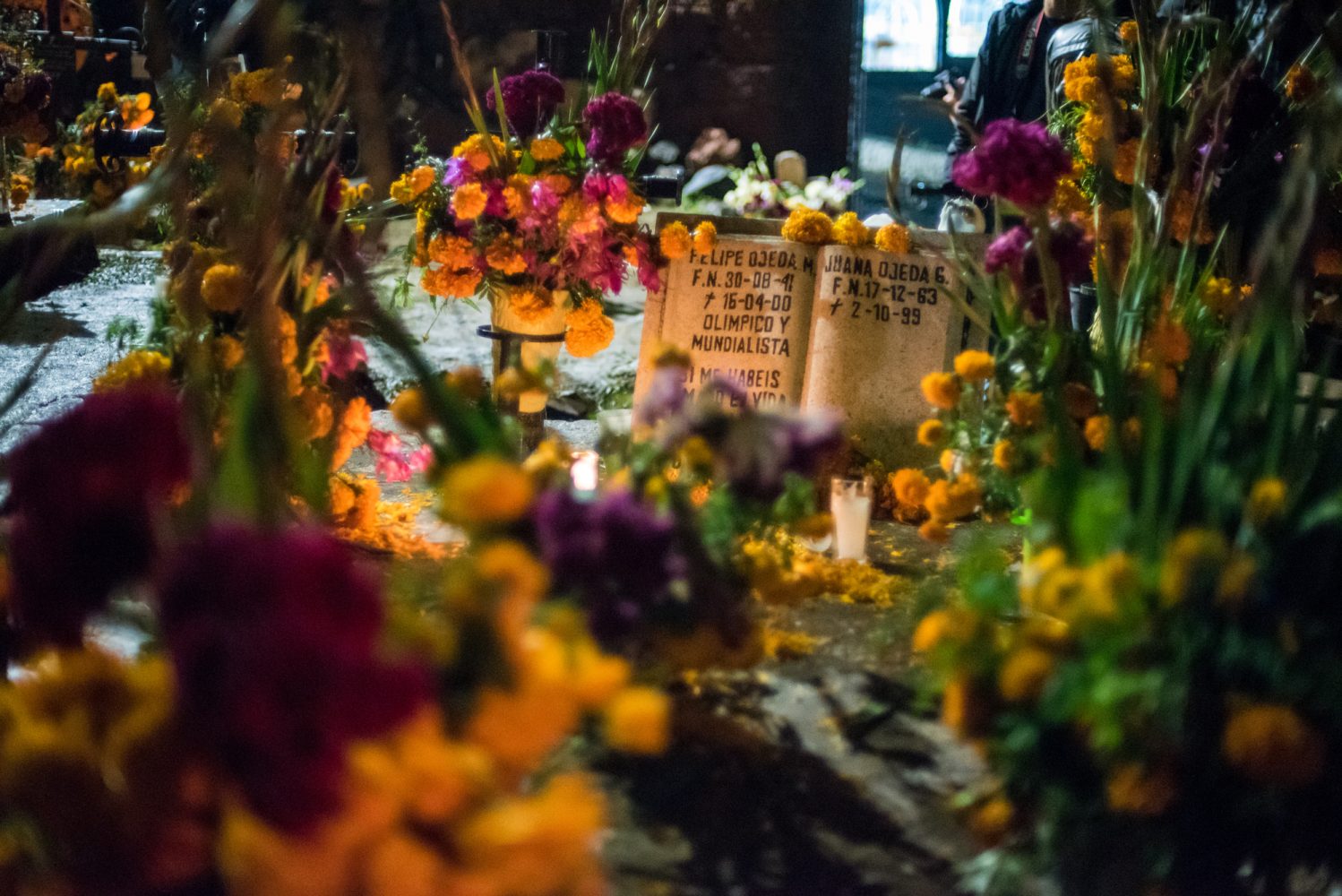 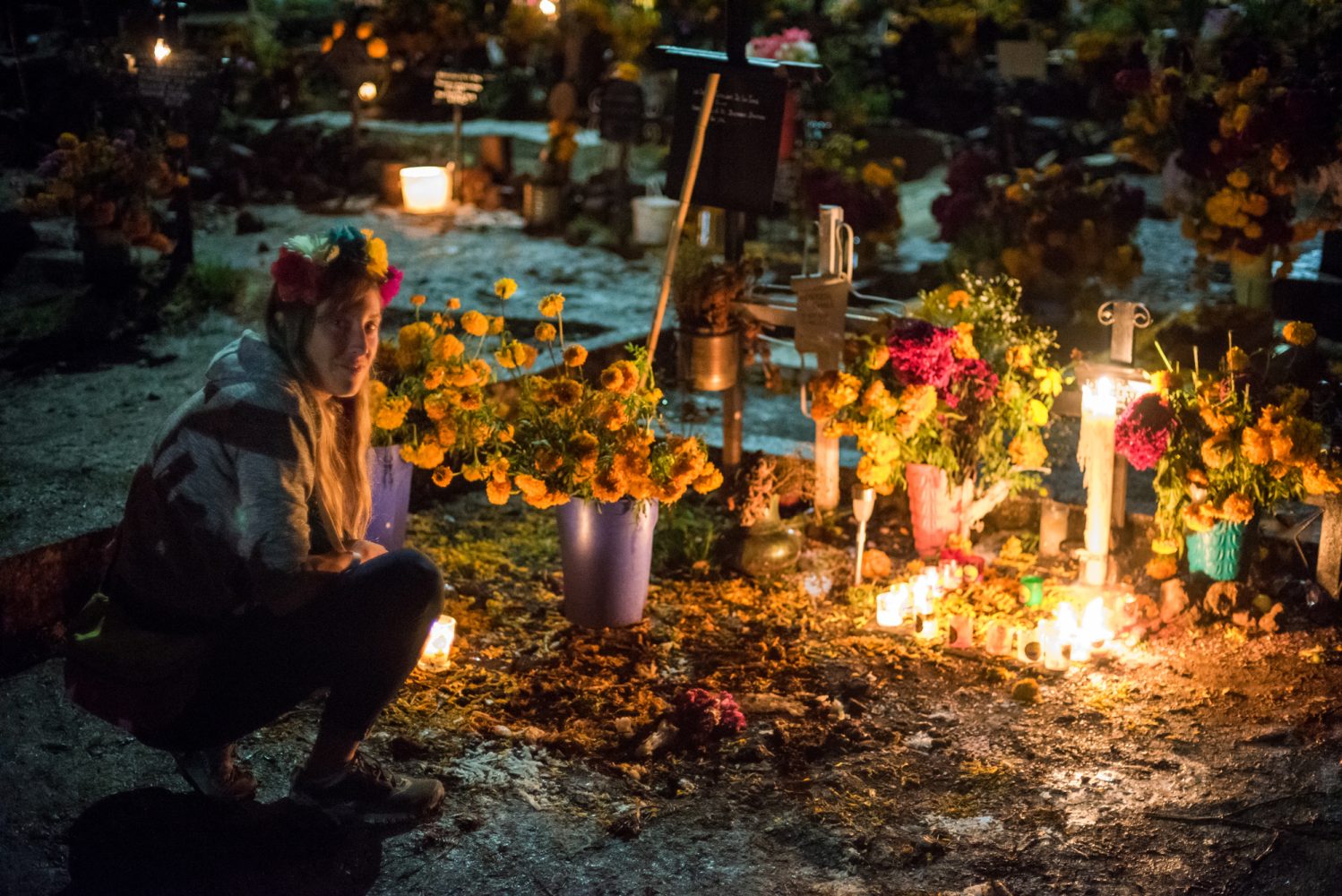 We might have taken 10 steps into the cemetery when a man from the closest tarp party yelled in Spanish, “Hey, you with the camera, come here!” We were like, okay, here we go. He and his family warmly welcomed us, asked about where we had traveled from, told us to please explore the graves of his ancestors, and then gave us a big cup of tequila and a tamale. Immediate relief washed over us, as it did almost every other time we took a chance on the kindness of people on our drive down the Pan-American Highway. We all gathered in for a group cheers, hugs, kisses, and, of course, a family photo. It wasn’t long before the second-closest family under tarp number two greeted us with friendly introductions and then put two giant pan de muertos into our paws, the official Day of the Dead bread, homemade by Abuelita (Grandma). We felt so warm and welcome in the company of complete strangers, commemorating the lives of their loved ones lost. There wasn’t a moment of mourning or sadness, only happy memories, and an overwhelming appreciation for the meaning of the word family. 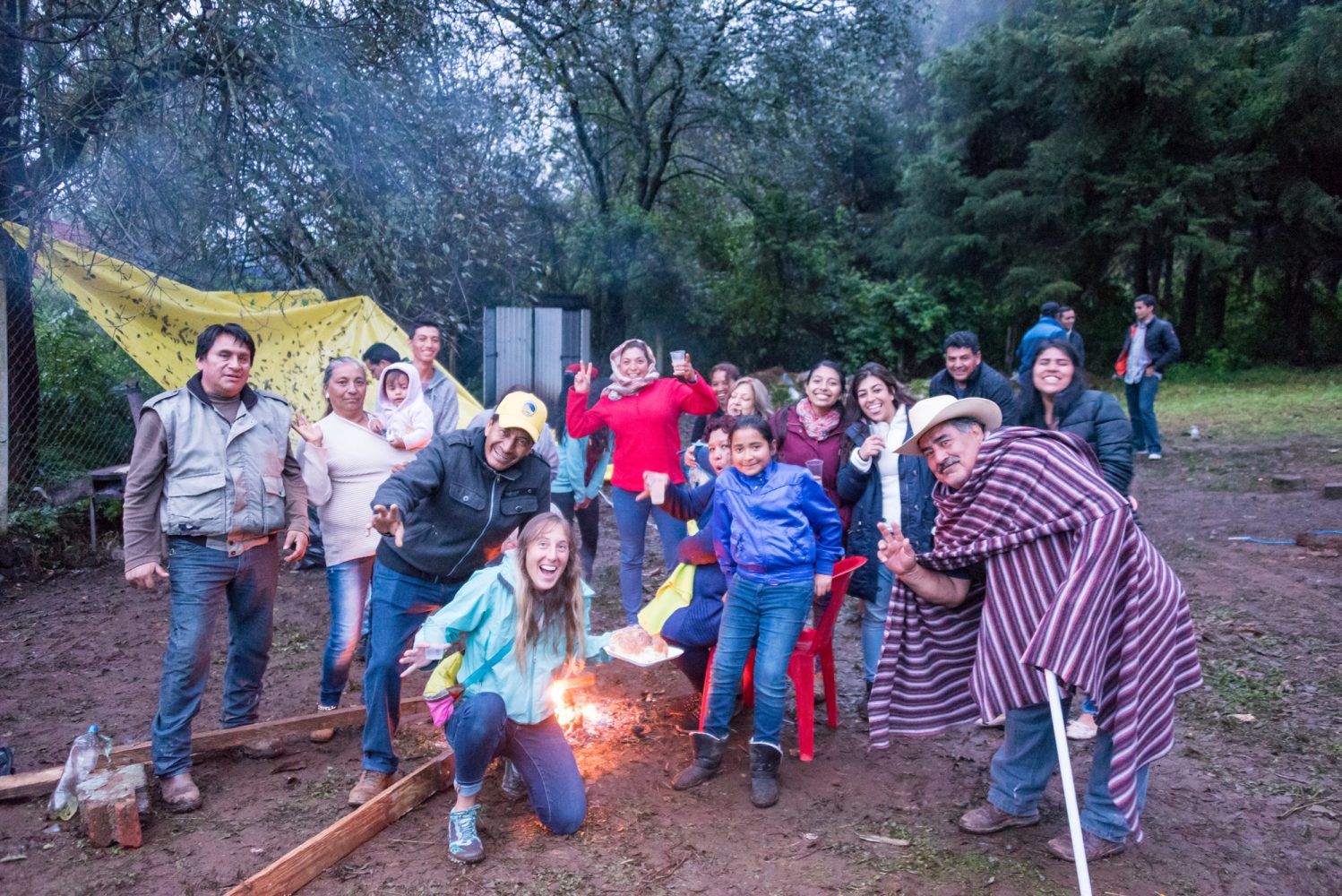 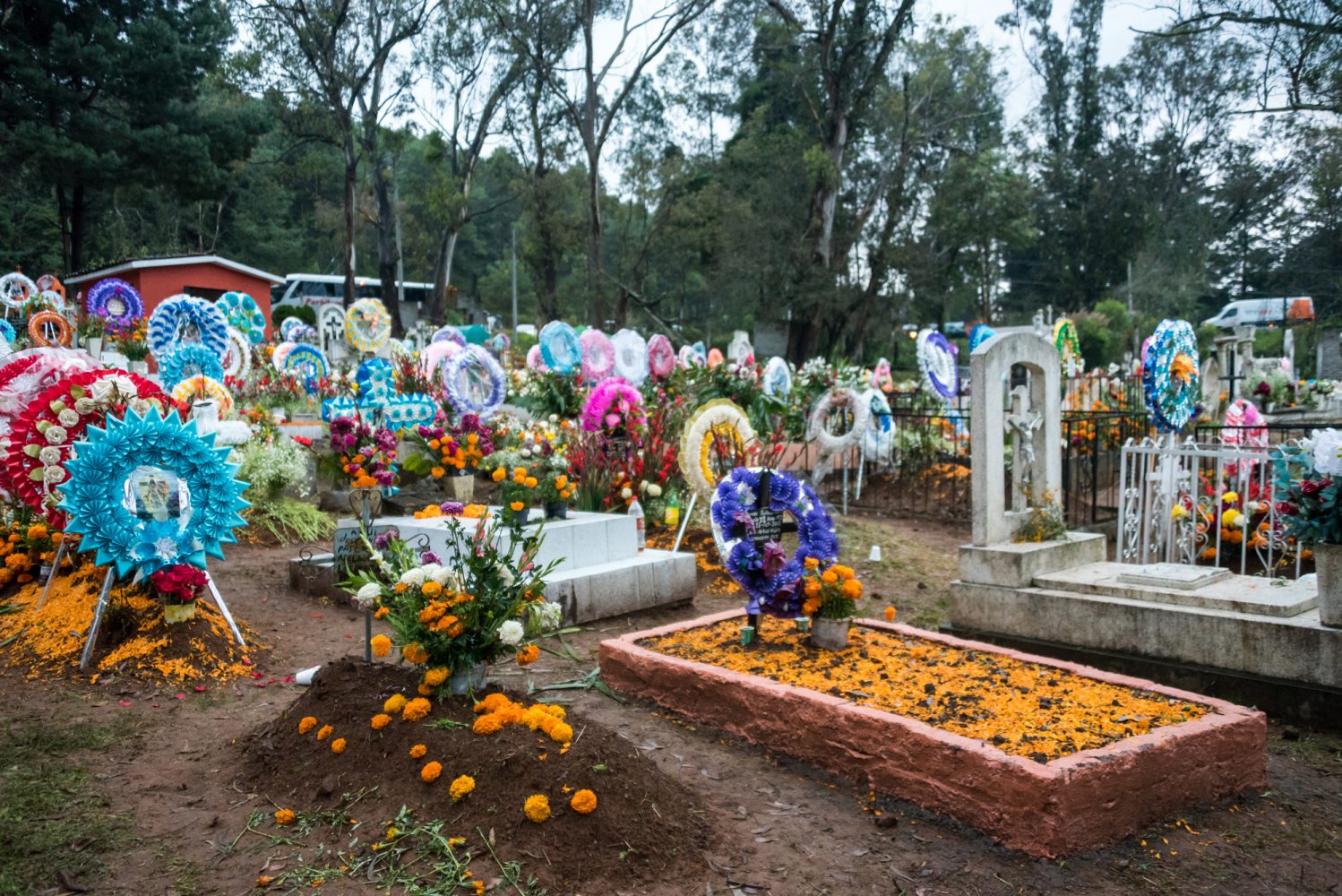 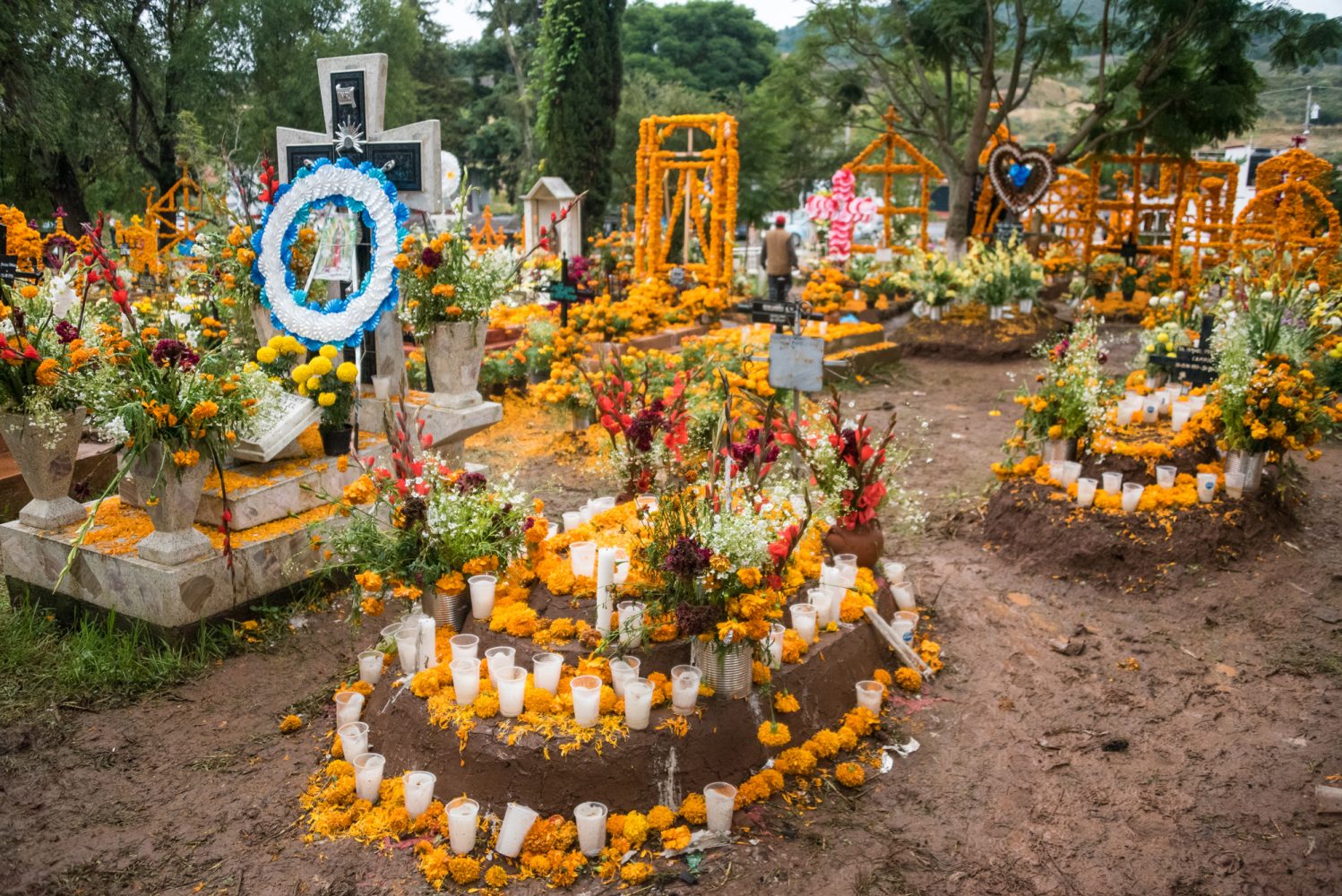 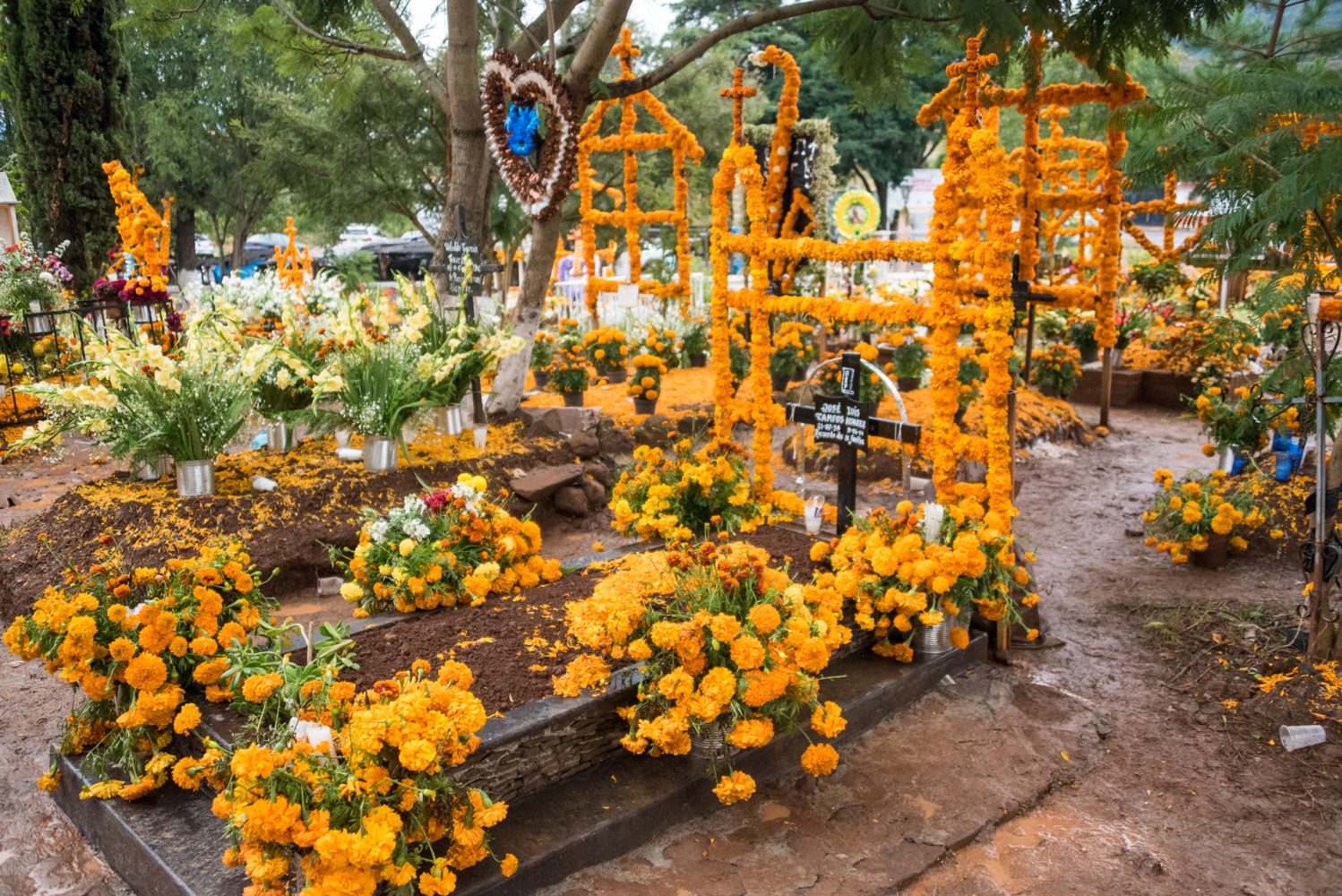 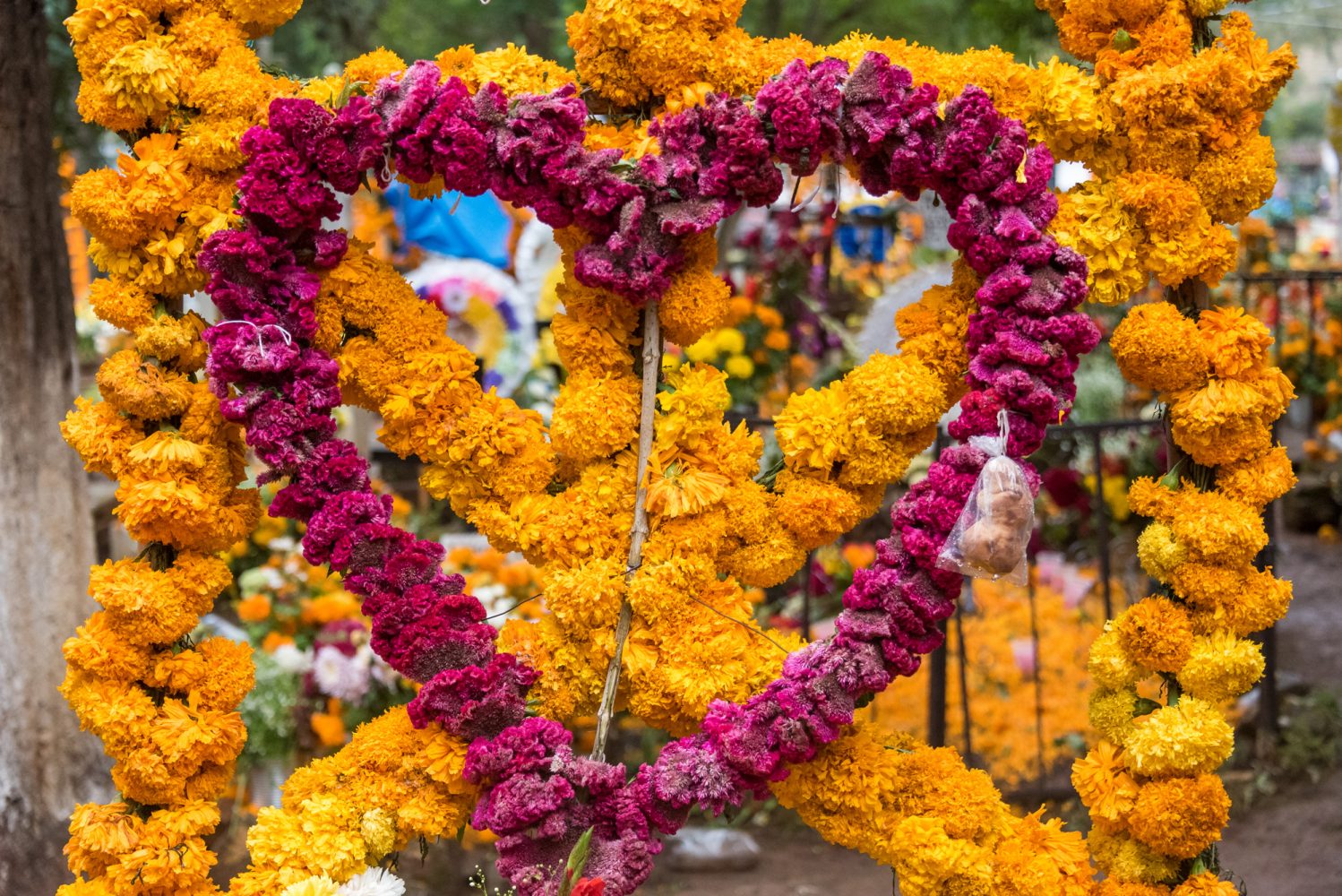 At that point, it was getting dark, so we started to make our way back to the van. The entrance was now blocked by a truck stuck in the thick clay mud that surrounded the gate. We were still floating on the cloud of generosity from the welcoming families, and as any overlander or good-natured human would, we figured we’d try and help these guys out. As Jordan ran to grab the MaxTrax recovery boards from the van, I noticed that the tequila and wine bottles were empty by this time of day, and problem-solving was not at full capacity among the cemetery go-ers. We explained (the best we could in Spanish) what the recovery boards were and placed them under the truck’s mud-covered tires. The driver definitely didn’t understand our instructions to “Whatever you do, don’t spin the wheels.” After his second try, one of his balding, slick tires sprung a leak. The teeth on the Max Trax had punctured it. We felt the tension. He rightly blamed the boards, but luckily, he wasn’t angry and still wanted to use them to help the truck. 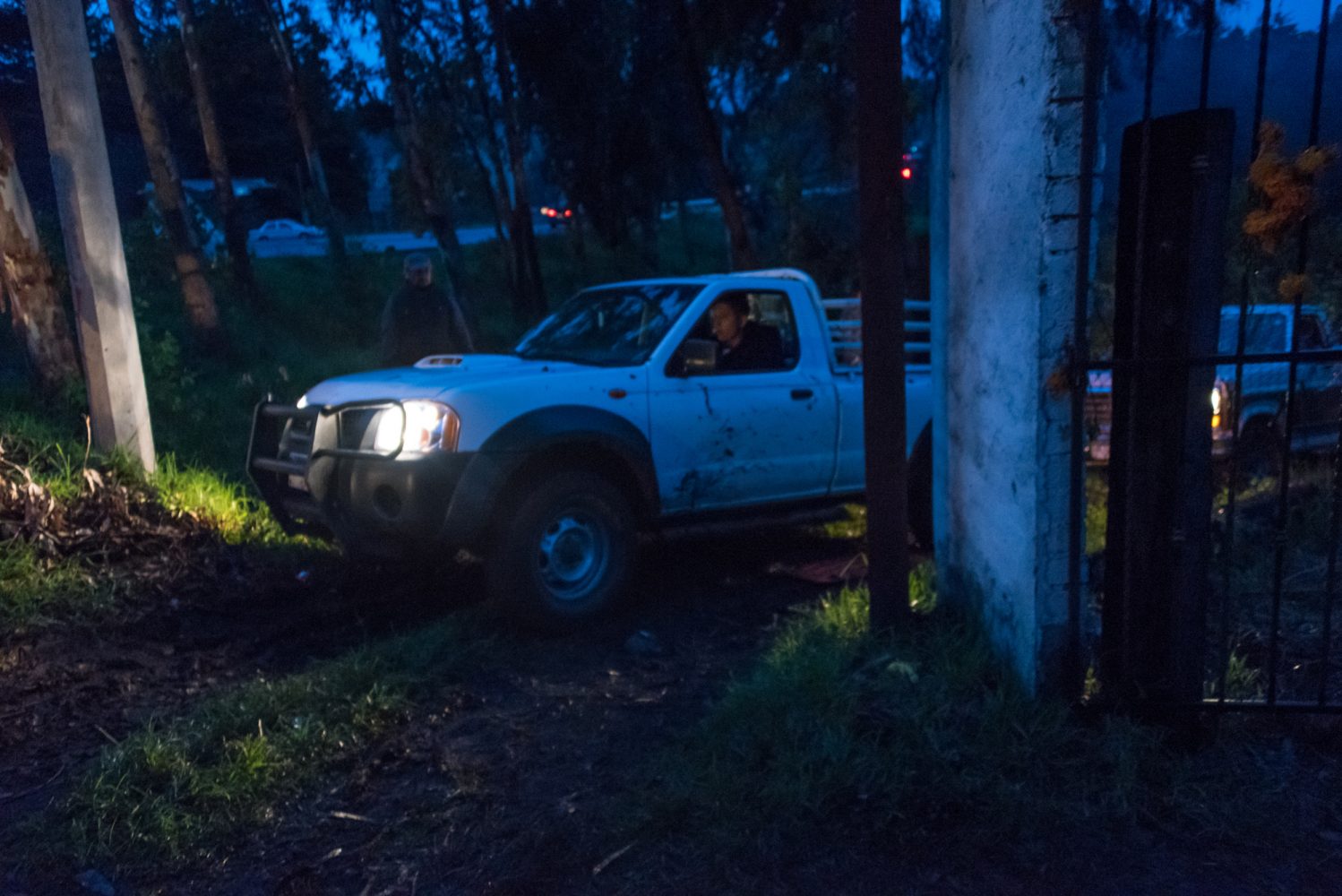 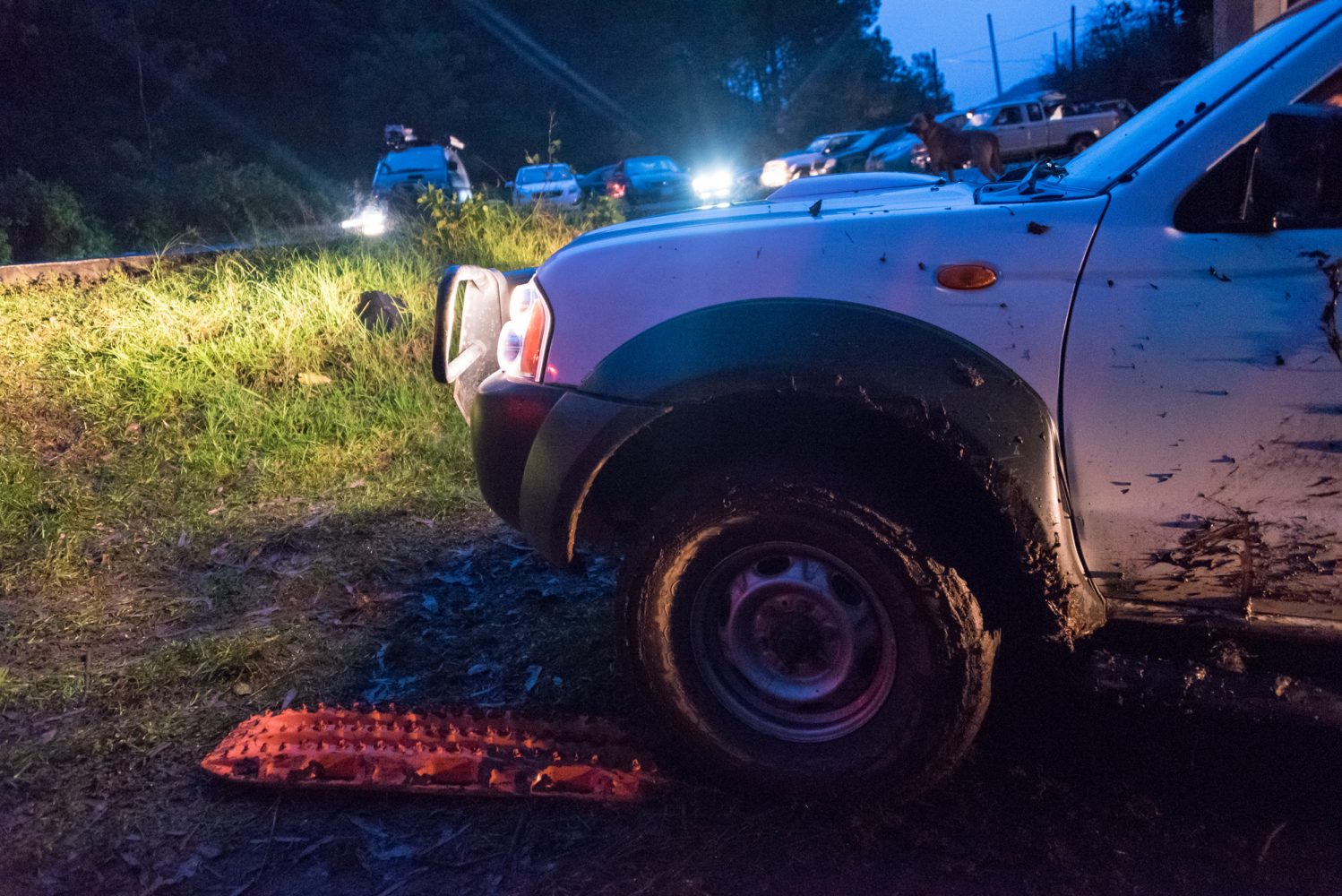 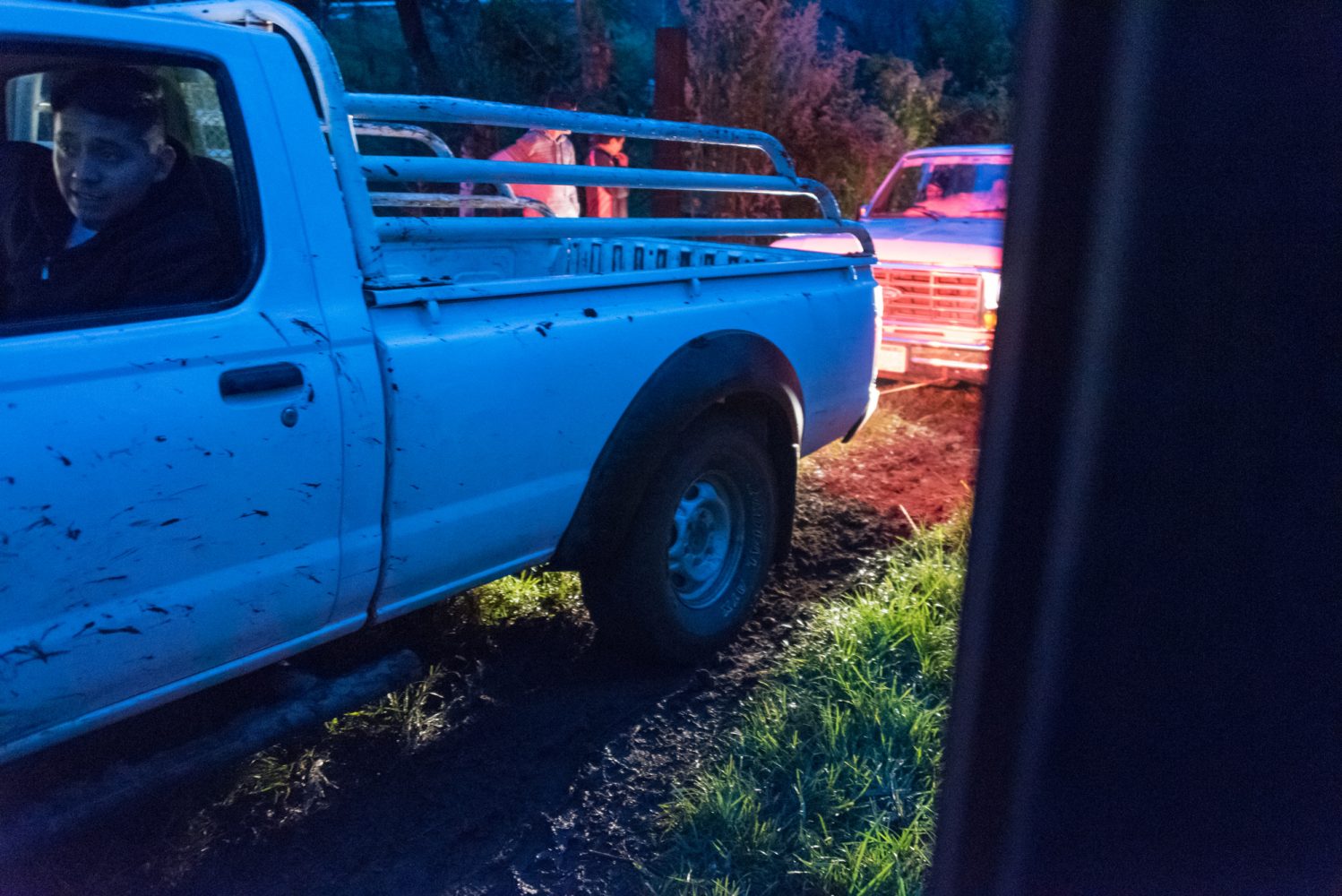 Meanwhile, a crowd had formed surrounding the spectacle, and it had gotten dark. The only lights were the glowing candles on the gravestones behind us and a couple of smartphone flashlights as another guy tied a rope to the truck and connected it to his car’s back bumper. It seemed like a good idea, but not to everyone. As he secured the rope and headed to his car to pump the gas, an older man came out of the crowd and pulled out his machete. He wobbled a bit, mumbled, “No, puedes,” (no, you can’t) and sliced the rope. The guys who set up the tow system were pissed and stared wide-eyed at the old man.

Silence and surprise struck the crowd. That was our cue to leave. Covered in mud, we gathered our boards, kindly said thank you, and goodnight, slipping off between the glares of old machete and the truck boys. It seemed like everyone was frozen, waiting for someone to make a move. We didn’t clean off the MaxTrax as it was clearly time to go, scraping enough mud off to secure them to the van and make our exit. In this short amount of time, the truck was being pulled out by a different, bigger truck with a new rope attached, successfully freed from the muddy ruts. We beeped goodbye, got a few waves, and left the scene. We were happy we tried to help, as anyone there would have done the same for us.

The night was surprisingly not over as we headed to hop on a small wooden ferry and visit the island of Janitzio in the middle of Lake Pátzcuaro, the place where it is believed that the veil between darkness and light (living and the dead) is the thinnest this time of year, making easy access for the spirits to enter the realm of the living. Reading about this place was the reason we decided to change our plans and come all this way. The island is covered with swirling roads and hidden alleys leading to dead ends or small vendors. As the boat approached, you could see the glow of the ancient, beautifully lit cemetery terraced on the hillside. At the highest point, the 130-foot-statue of Mexican hero Jose Maria Morelos stands proud with his fist up to the heavens—you’re actually allowed to walk up into a tiny room constructed inside his fist with views overlooking the island. Janitzio didn’t disappoint. The vibes were strong, especially every time you turned a dark corner and caught that ominous breeze. Maybe it was one of the spirits rushing back to its gravestone ofrenda to see what goodies had been left by its living family. I like to think so. 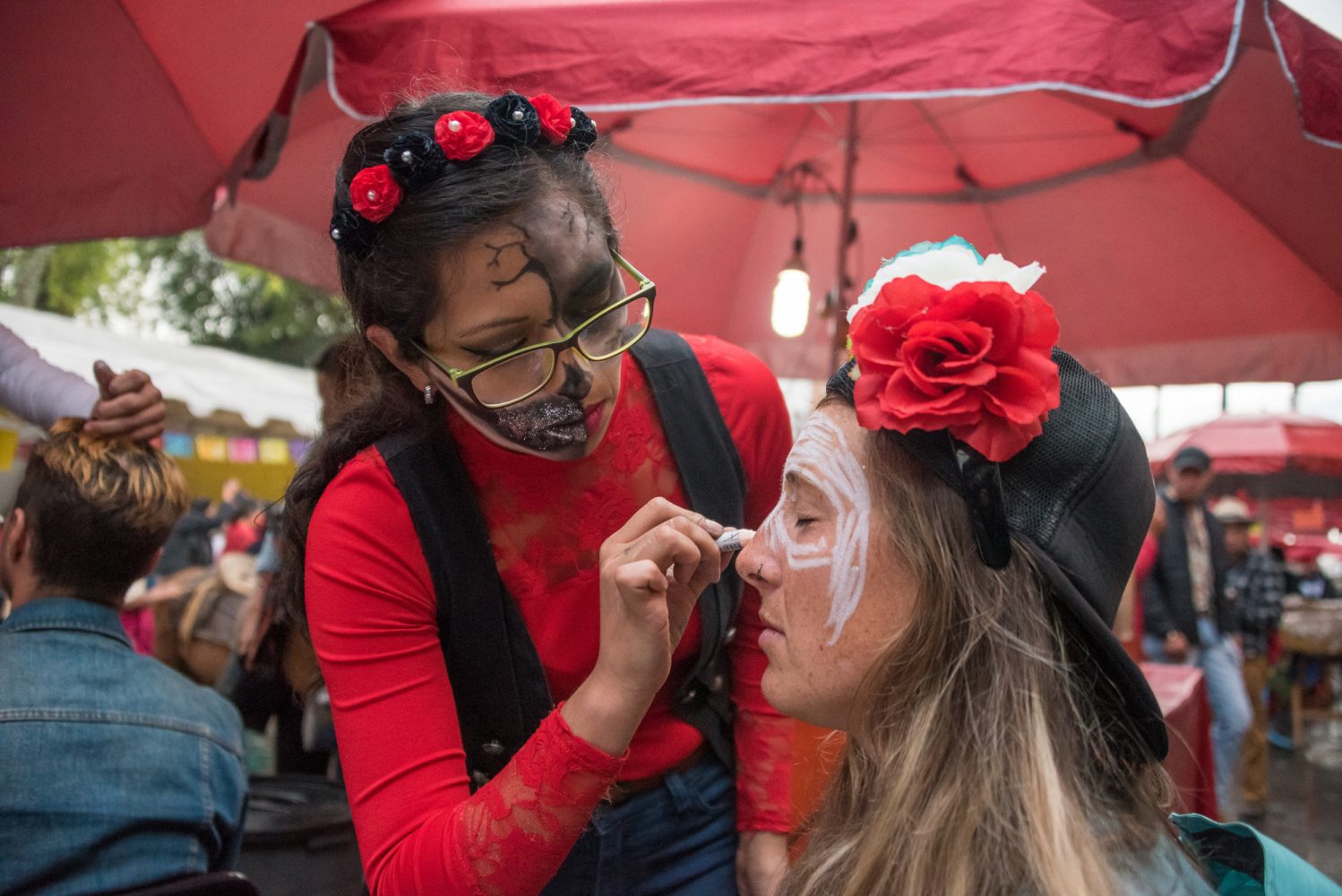 As we loaded onto the tiny boat back to the mainland, some new friends pulled out a portable speaker and began to play traditional Mexican songs. One of the guys acting as the DJ looked at us and said, “watch this,” as the entire boat of about 40 strangers heard a familiar tune and sang perfectly in sync. And that was the absolute best way to cap off our first true Mexican Noche de los Muertos. 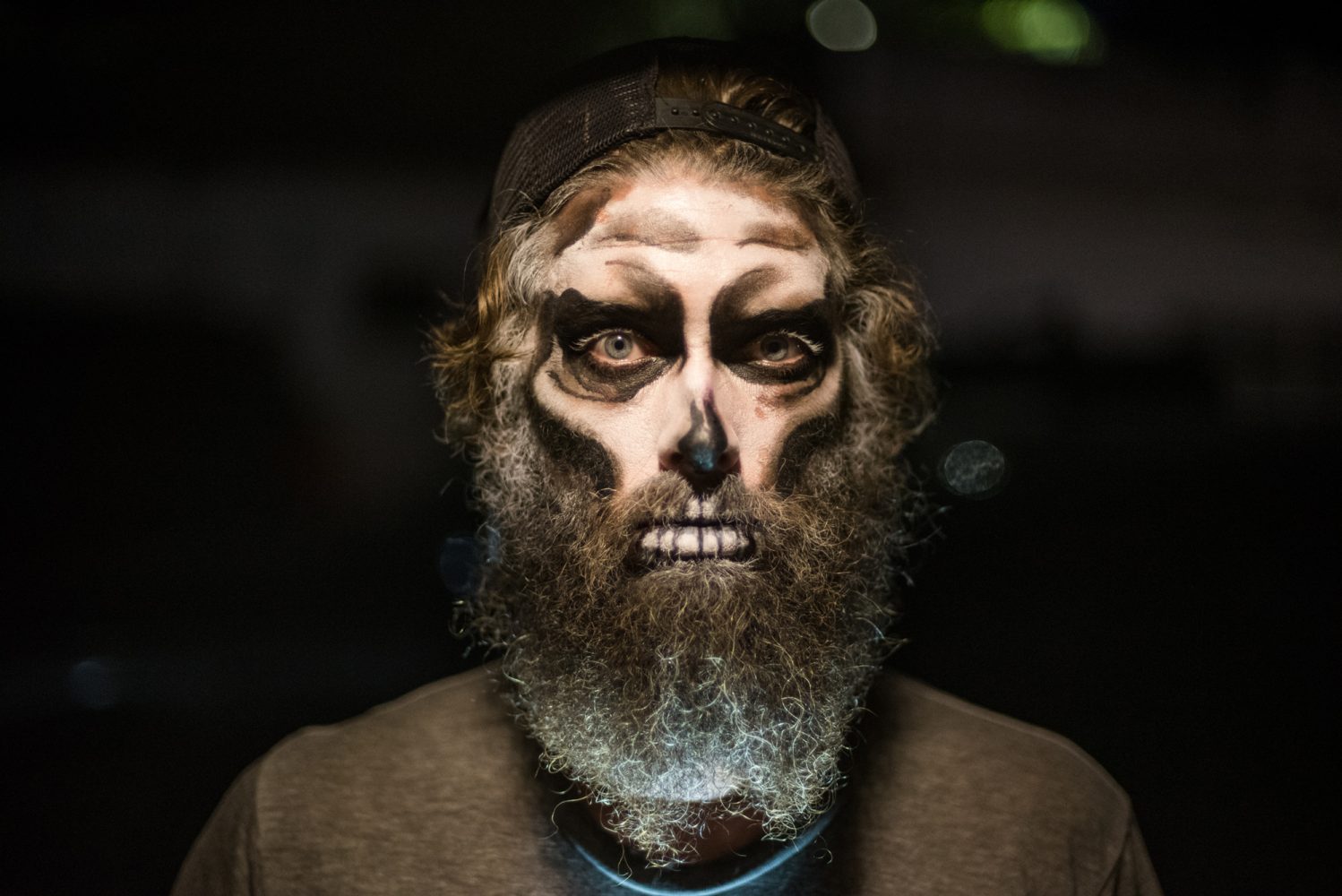 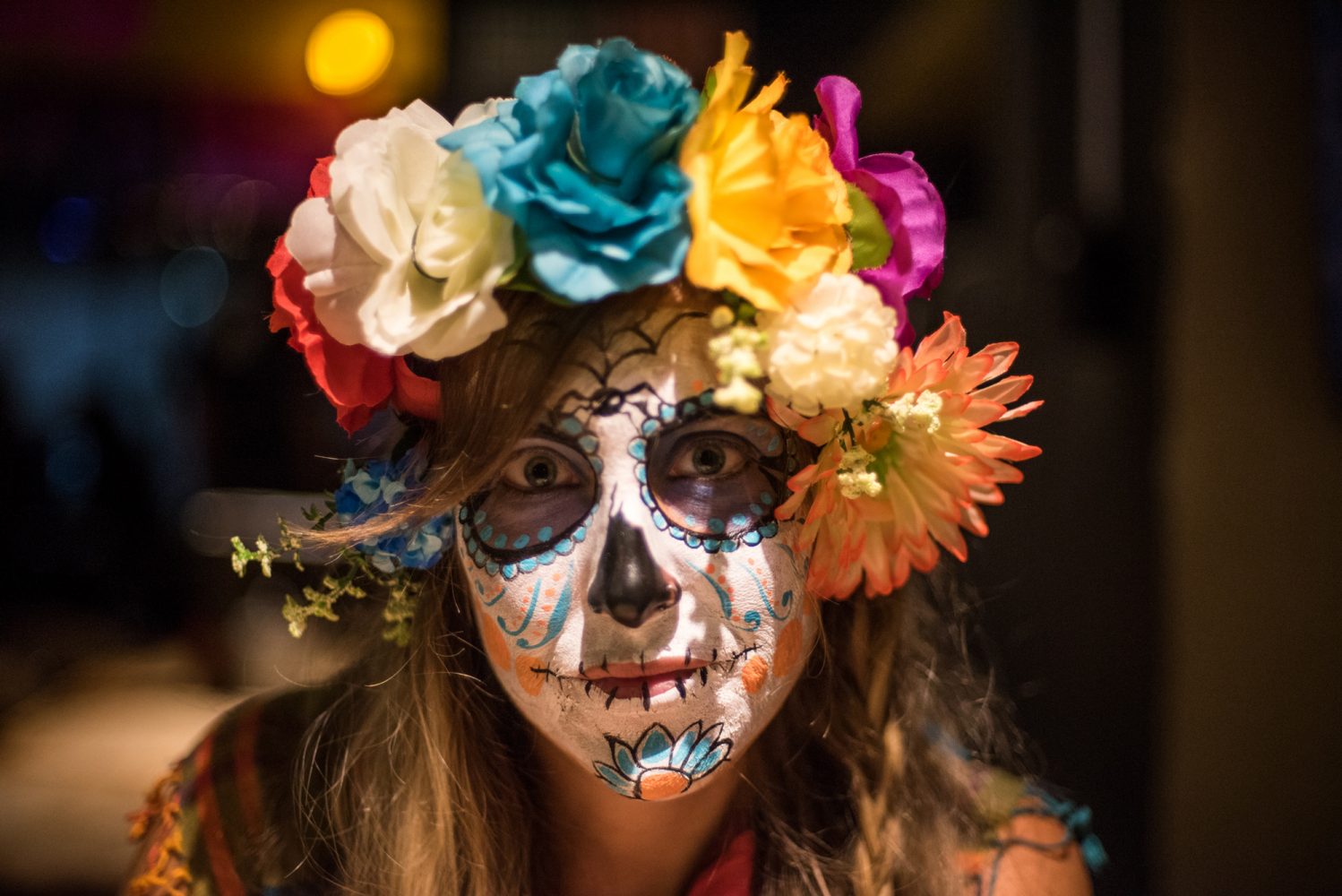 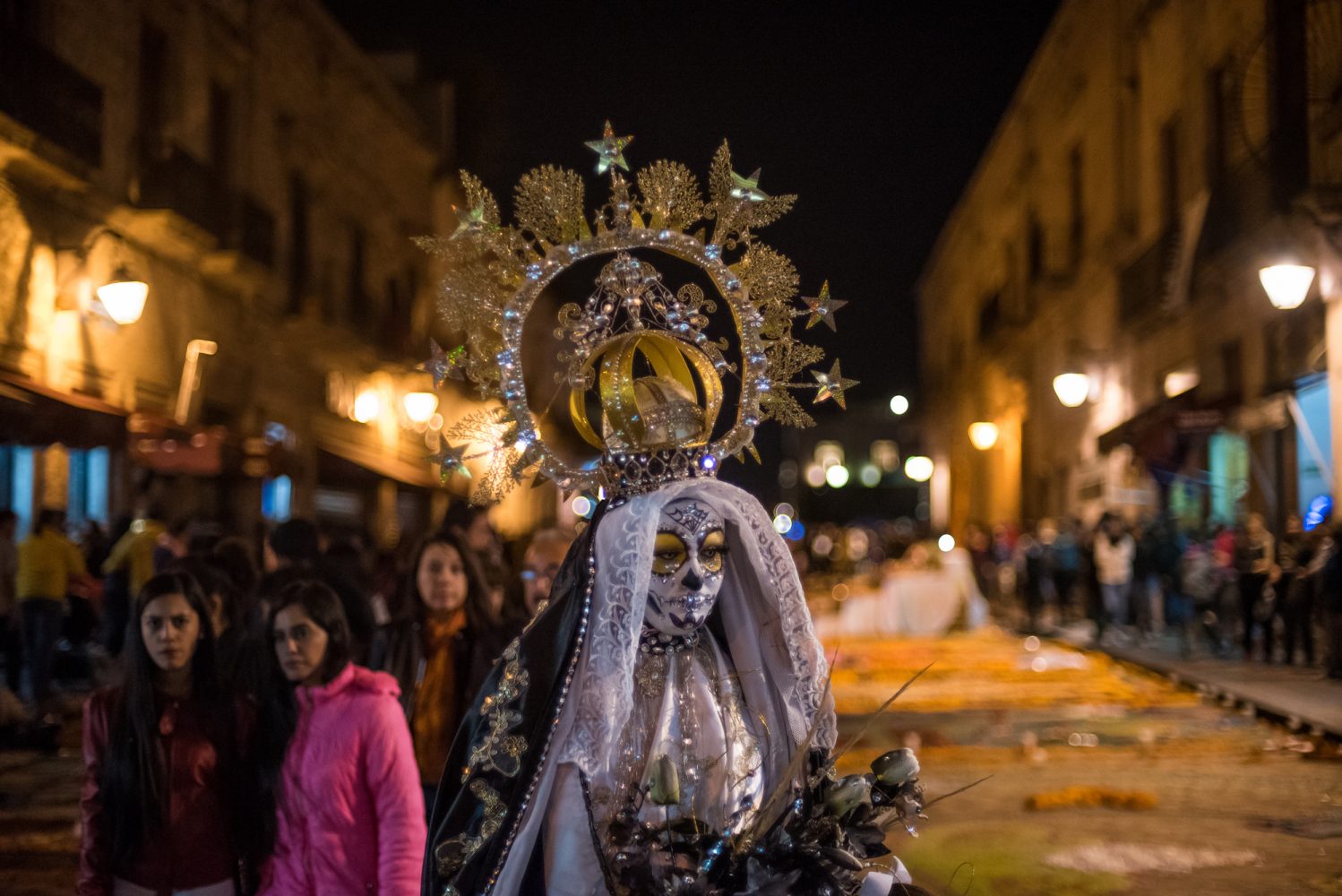 Candice is a professional artist, nature lover, and an avid volunteer who sees the true importance of giving back. During her travels, she enjoys painting murals and teaching kids how to draw. Jordan is a YouTube-taught van builder. When not exploring the world by vehicle or on foot, he works as a visual effects compositor for films. Over the last 15 years, he’s developed a love for shooting photos instead of just editing them. They both enjoy telling the stories that inspired them to click the shutter in the first place. To them, “be old later” means living life to the fullest here and now and never letting your age hold you back from doing the things that excite you.