The 2000s were a weird time all around, but they seemed a little weirder over at GM. It was like their engineers hunkered down for the Y2K apocalypse, and in their planning, designed bugout vehicles that could be constructed from existing car parts and recycled plastic. When the world didn’t end as they expected, they used the designs anyway, and thus the Aztek and Avalanche were born.

I admit, it probably didn’t happen this way, but it’s the best reason I can think of that GM suddenly invented a new vehicle category that no one had even asked for. I mean, the only other way you end up cutting the roof off a Suburban to make it a truck is with a country CD and copious amounts of Bud Light—and the GM design team just doesn’t seem the type.

However, they arrived at the decision to produce these vehicles, they were, at least in the case of the Avalanche, a relative success, selling as many as 93,000 units in a year. The “Avy” boasted unique features like the midgate, which created a full passthrough between the bed and the cab, three removable tonneau panels that could support 250 pounds each, integrated hidden storage for spare fluids and tools, and even an optional 8.1L V8 motor. Sure, there were a lot of drawbacks too, but for all its flaws, the Avalanche managed to fill some weird void between trucks and SUVs that no one even knew existed and that’s pretty cool. So before you start throwing shade, even though the sun-faded plastics could use it, let’s take a closer look at Te Anau III, the best Avalanche build we’ve seen so far. 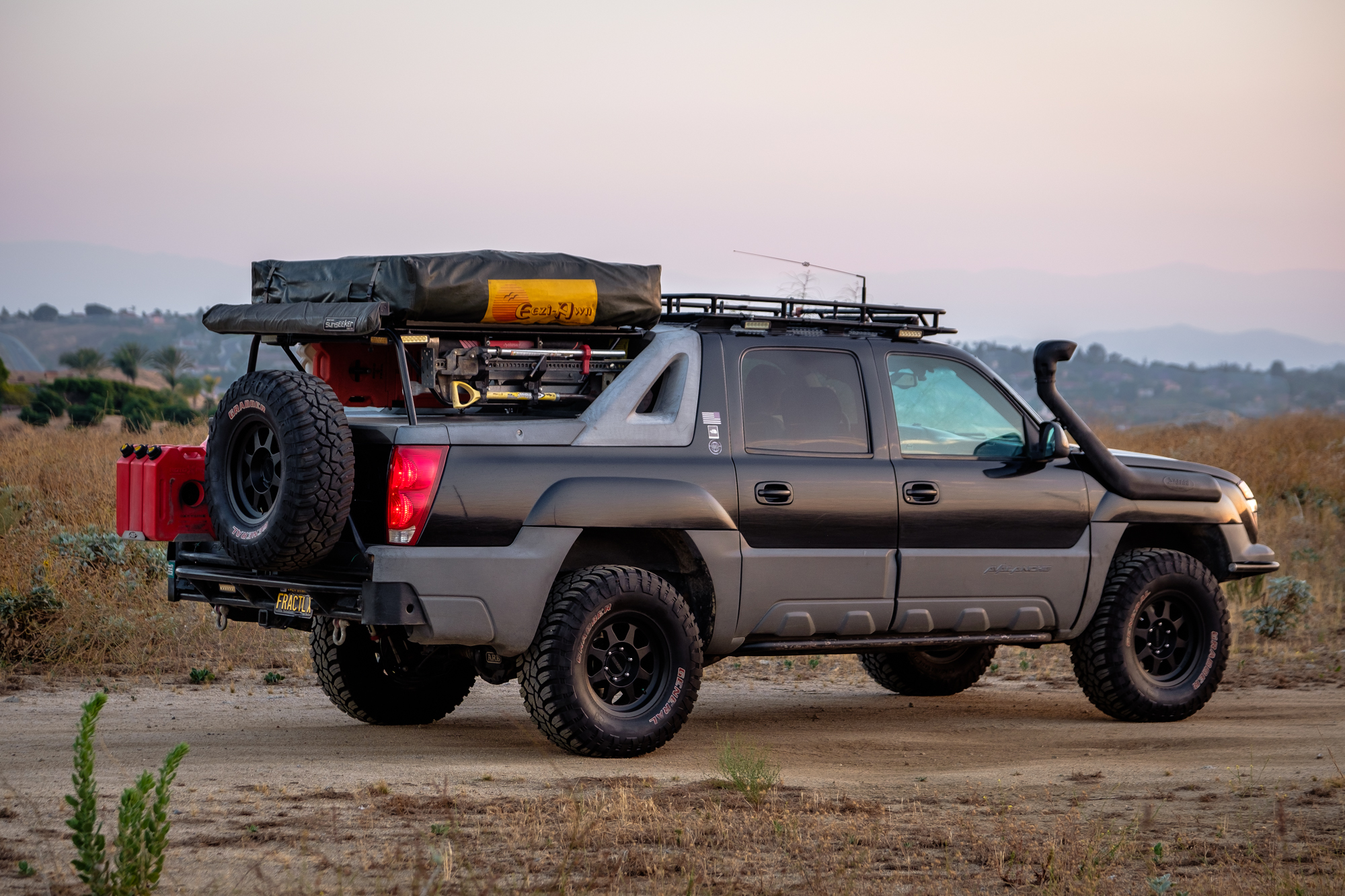 The Avalanche you see here is almost nothing like the factory model. Where the stock LS put out 285 horsepower and 310 pound-feet of torque, Bill Creech’s truck now makes 325 horsepower and 350 pound-feet of torque and delivers that torque at 2200RPM instead of the original 4600RPM. The aftermarket 4L60E transmission is chock full of severe-duty components, paired to an upgraded torque converter, and cooled by a 30,000-pound trans-cooler. It stops its mass with an oversized Z36 severe-duty brake kit from Power Stop and rolls on 35-12.50/17 General Grabber X3s. It has a welder for emergencies, tools and spares for every eventuality, and a list of upgrades so long it might be easier to tell you what’s still stock. In other words, we have a lot to cover, so let’s get to it. 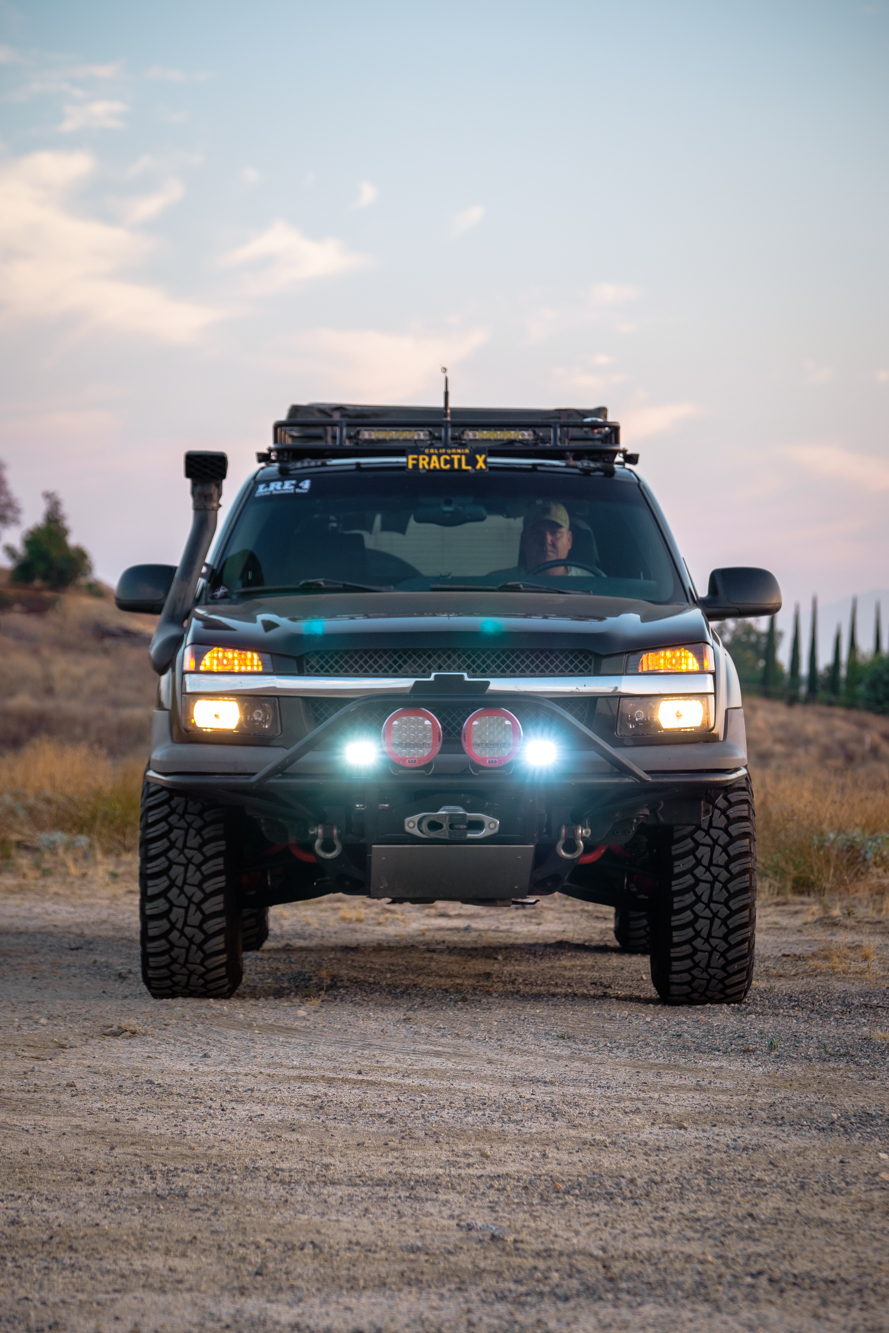 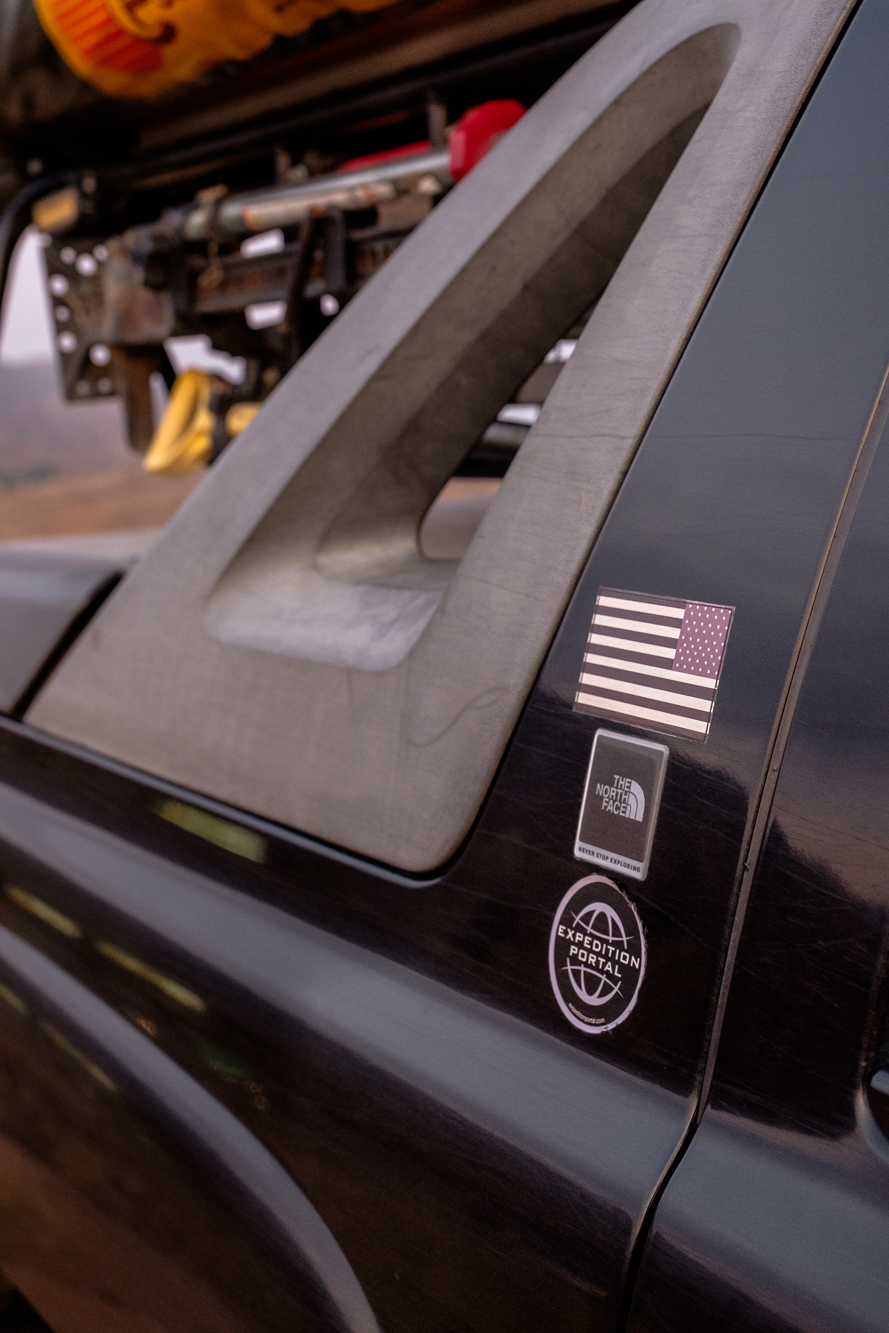 While the Avalanche’s plastic cladding may be sturdier than paint, it needed some real armor if it was going to see any good trails, so Bill gave Brent Boggs of BB Fabworx in Rancho Cucamonga a call. They started the process with a full set of skid plates underneath, which tied into an aluminum bash-plate and tube bumper in the front. This sports ARB Intensity LED lights with smaller LED pod lights to replace the factory fog lamps. Rock sliders were run the full length of the doors and tucked up close to provide maximum clearance and a clean look. To raise the rear departure angle and ground clearance, Bill then had a custom rear bumper made with dual swing-outs which pulled the spare tire out from below the bed and onto the rear of the truck. While they were at it, they decided to reinforce the frame to accommodate heavier payloads and stress on corrugated roads. 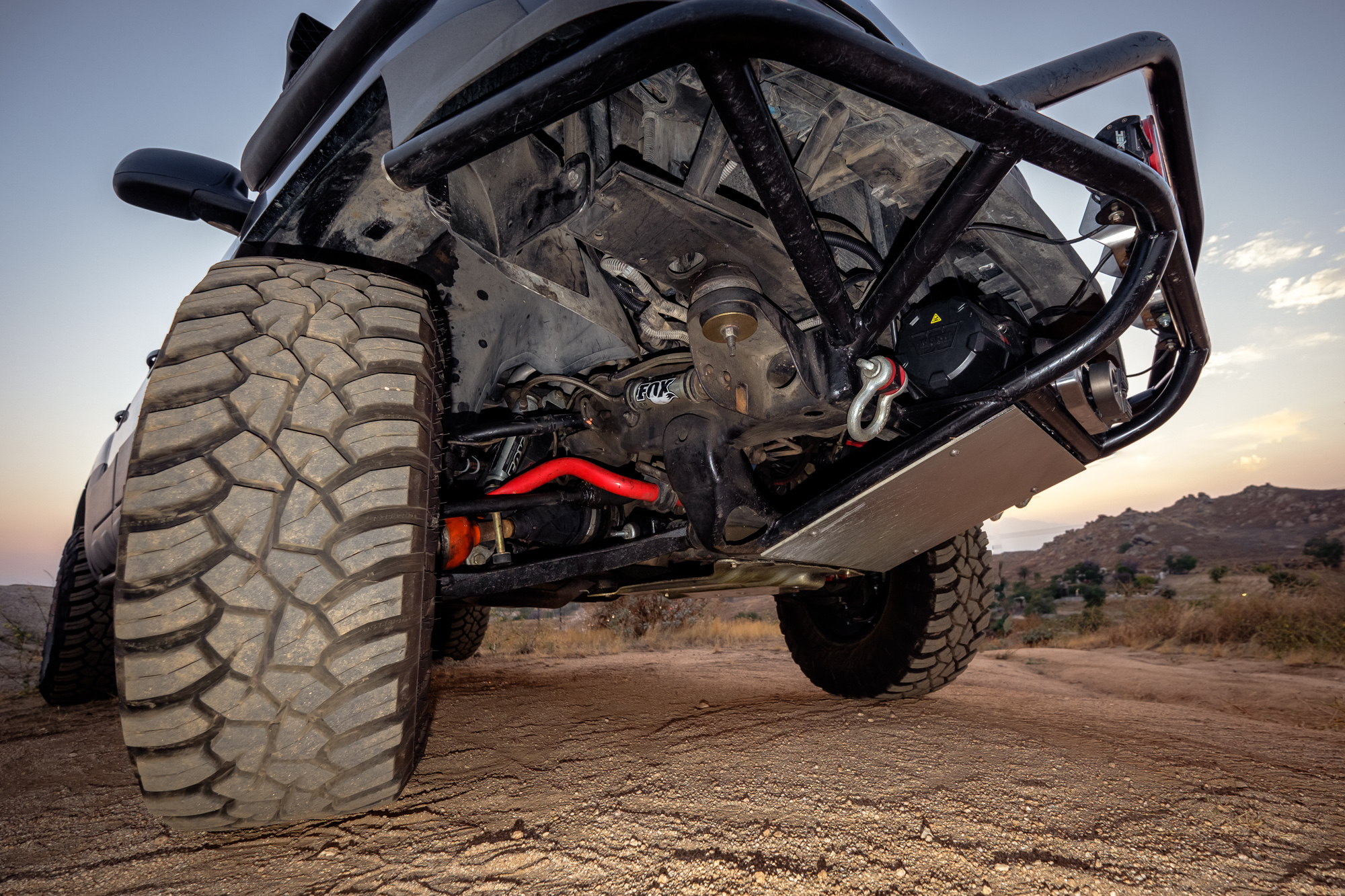 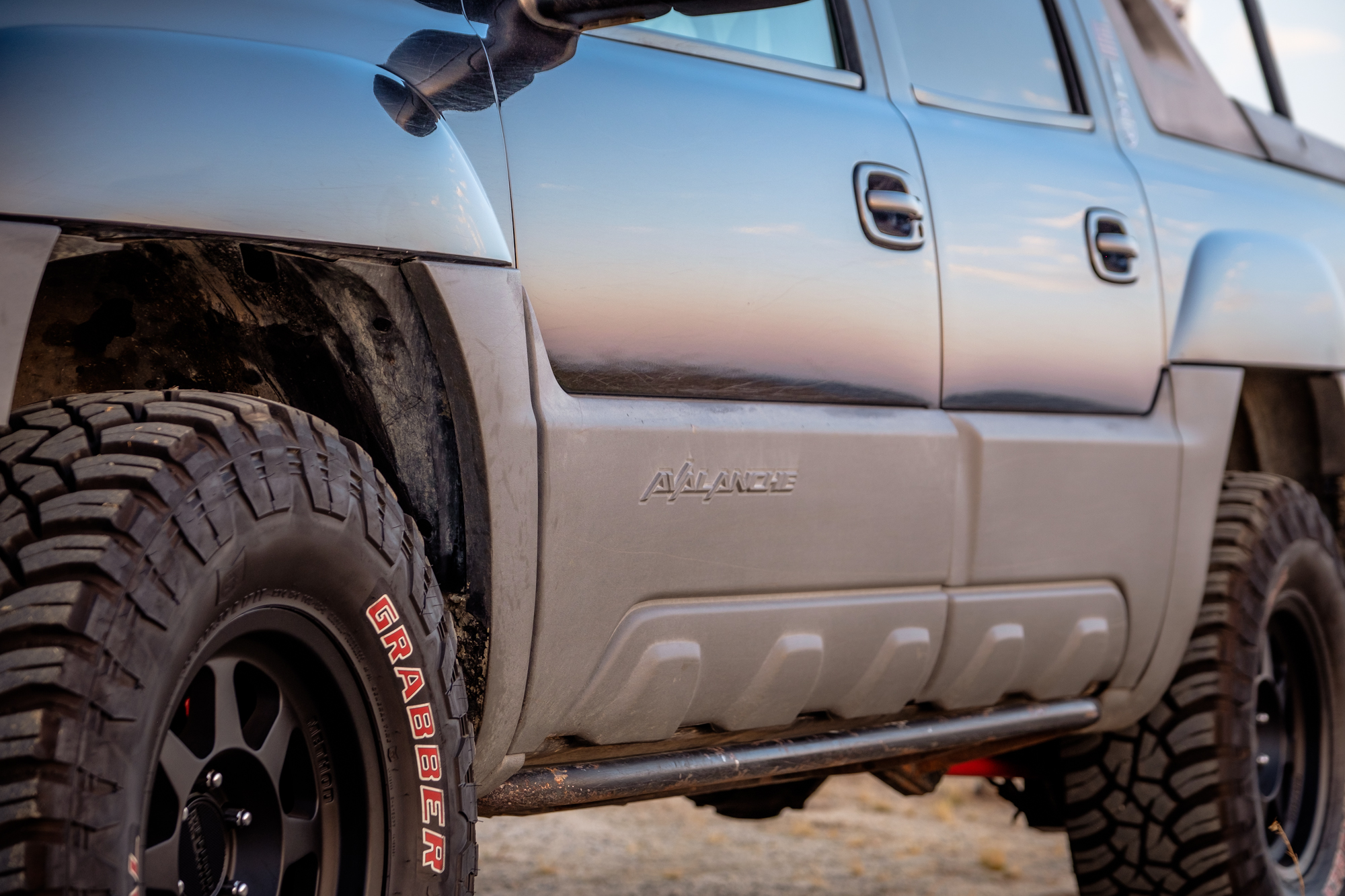 When Bill first started this project, there wasn’t an abundance of high-quality suspension options out there for the Avalanche. Lower end systems existed, but nothing you would want to rely on for long-distance travel. Fortunately, Eibach has since developed a quality kit for Avalanche owners based on testing done with Bill’s suspension setup, so future owners won’t have to go to the extent of custom work he did. 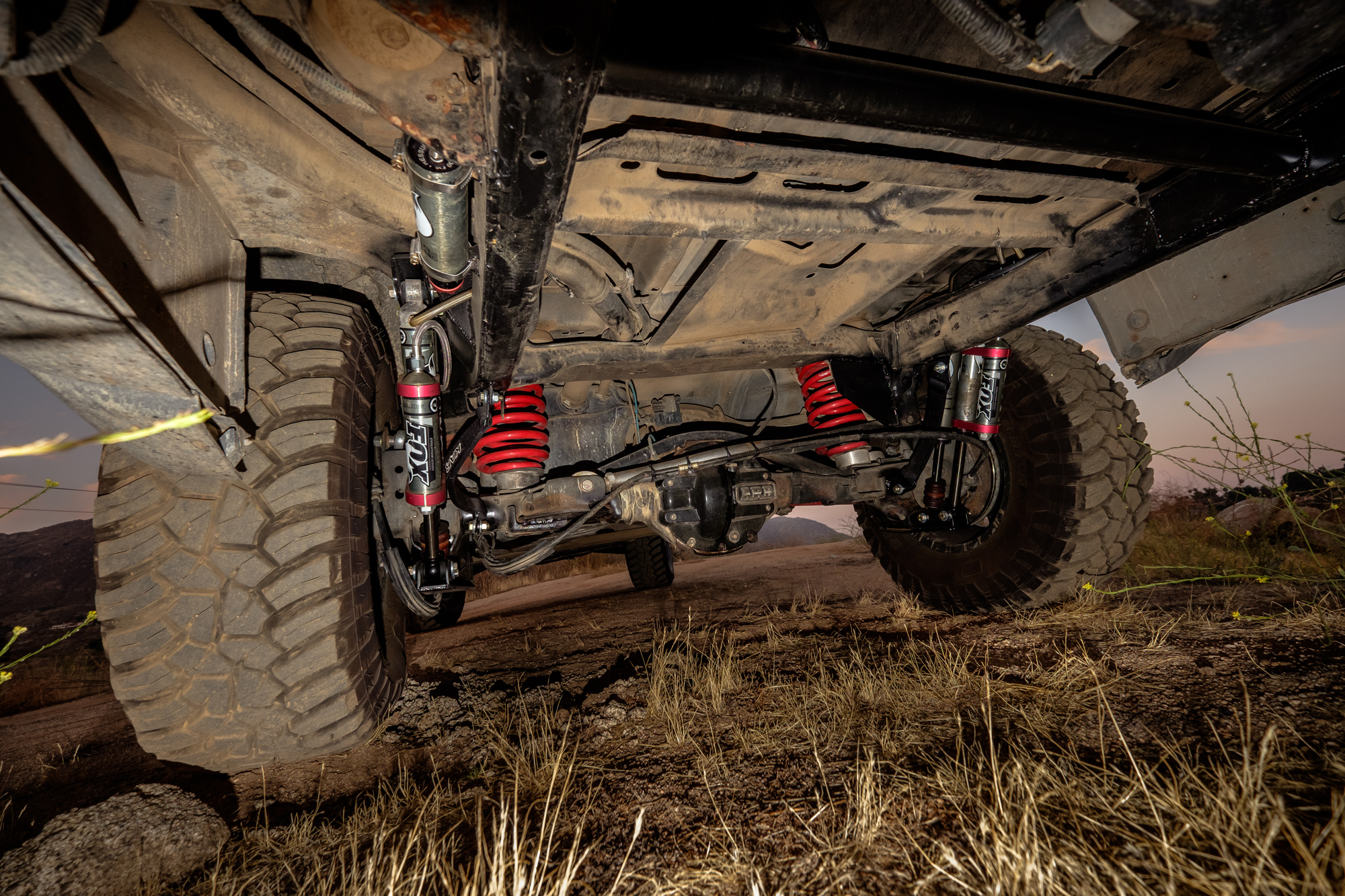 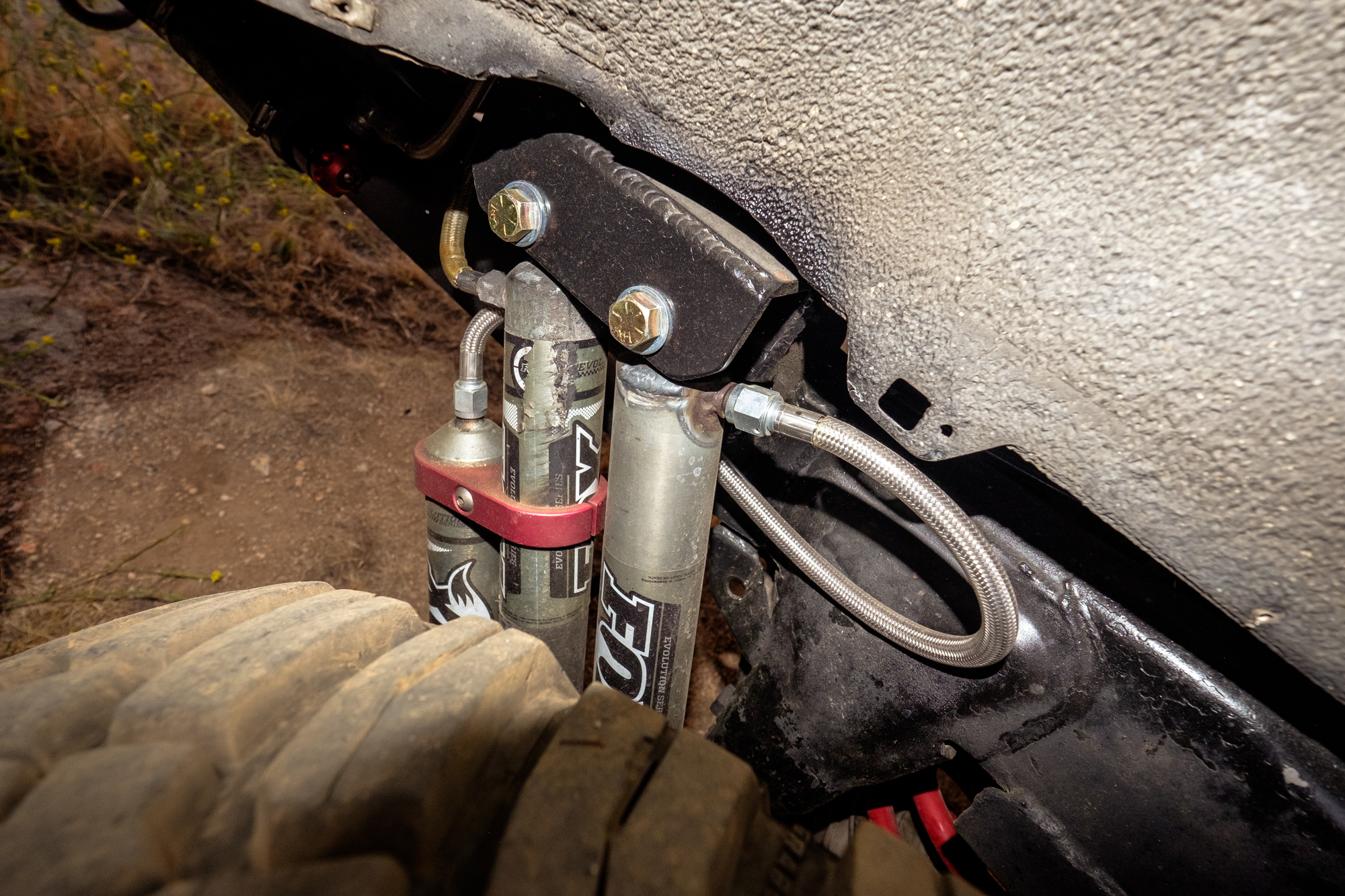 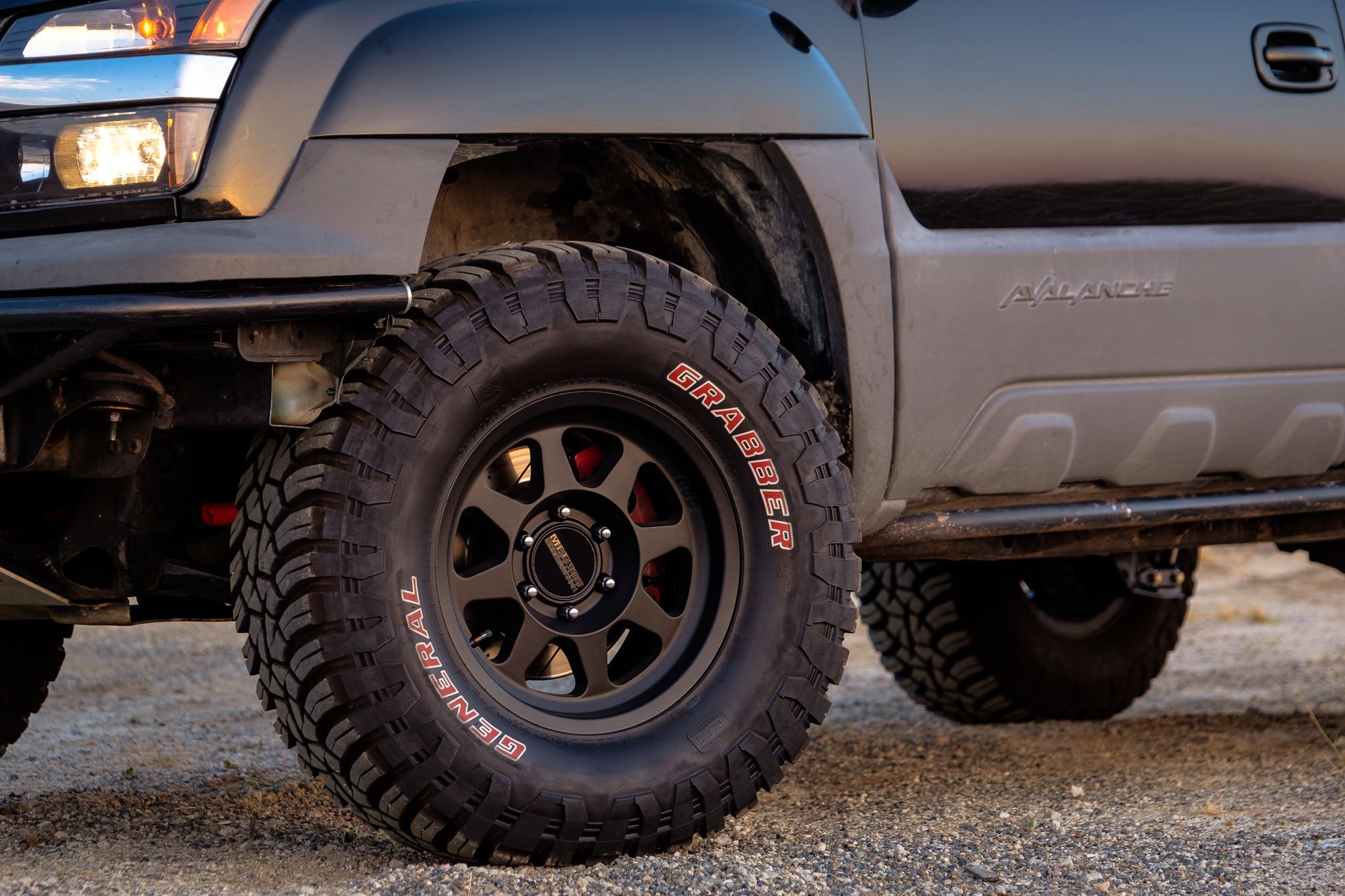 All of this suspension work not only makes the Avalanche ride like a dream but handles its weight more safely on the road. The cherry on top was that it gave the truck enough clearance for 35-inch General Grabber X3s wrapped around a set of 17-inch Method 701s. 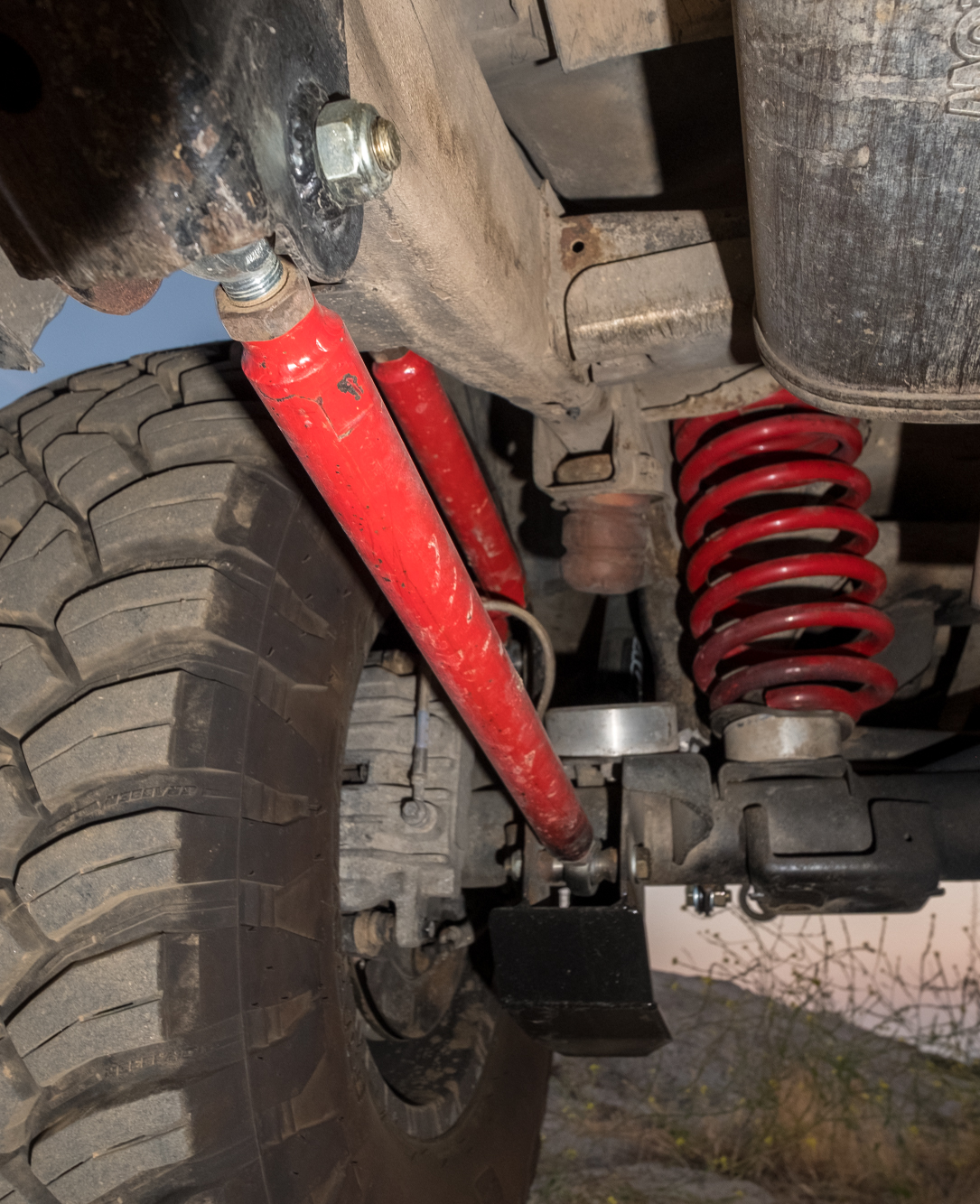 As I mentioned earlier, this Avalanche has a lot more than some big tires and a tent to show off. The motor has been modified and tuned to produce more horsepower and torque at a lower RPM, the transmission has been specced specifically for heavy-duty off-road use, and the brakes are larger and more powerful than before. Yet, the Te Anau III has even more hidden under its pinstriped bodywork than that.

It packs 4.88 G2 gears for turning the larger tires and restoring fuel economy, and new G2 axles and bearings to support the additional mass of the truck. The GM 10 bolt steel trussed rear end is shielded by an ARB differential cover, and as you’d expect with that, sports an ARB air locker inside for tackling more challenging obstacles. In addition to the 4.88 gears, the front end also has some stronger RCV Performance aftermarket axles to match the heavy-duty steering components. 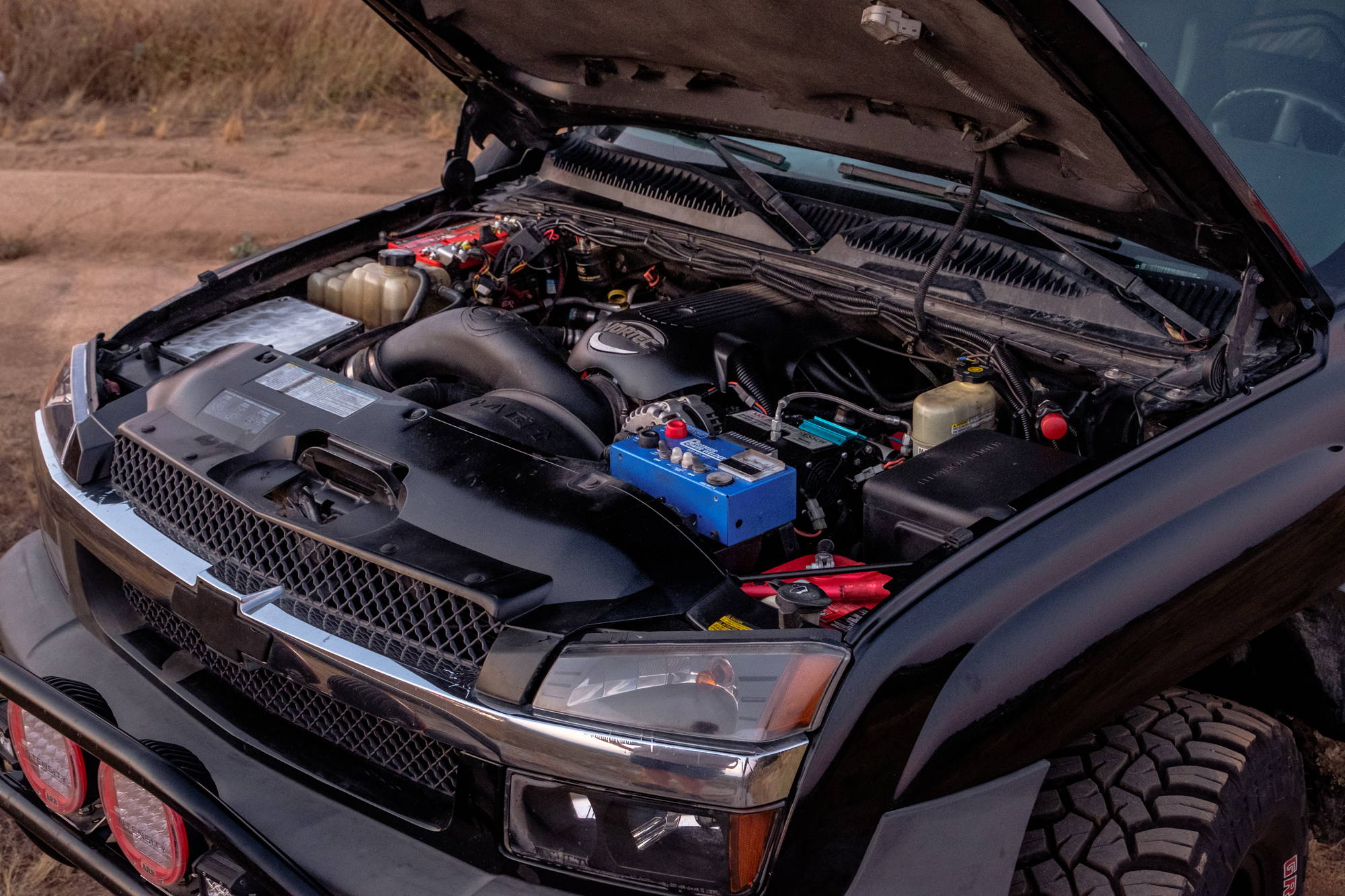 Because I know people are going to be curious, let’s talk about that raised intake. To fit a snorkel to the Avy, Bill searched through model after model of Safari Snorkel until he found one that matched almost exactly to his needs. It turned out to be the snorkel intended for the 100-Series Land Cruiser, and he plumbed it through to the motor with an S&B Cold Air Intake tube and custom sealed airbox. On the opposite end of the combustion equation, he rerouted the exhaust up between the frame rails to ensure it wouldn’t be damaged on the rocks or become flooded in deep water. 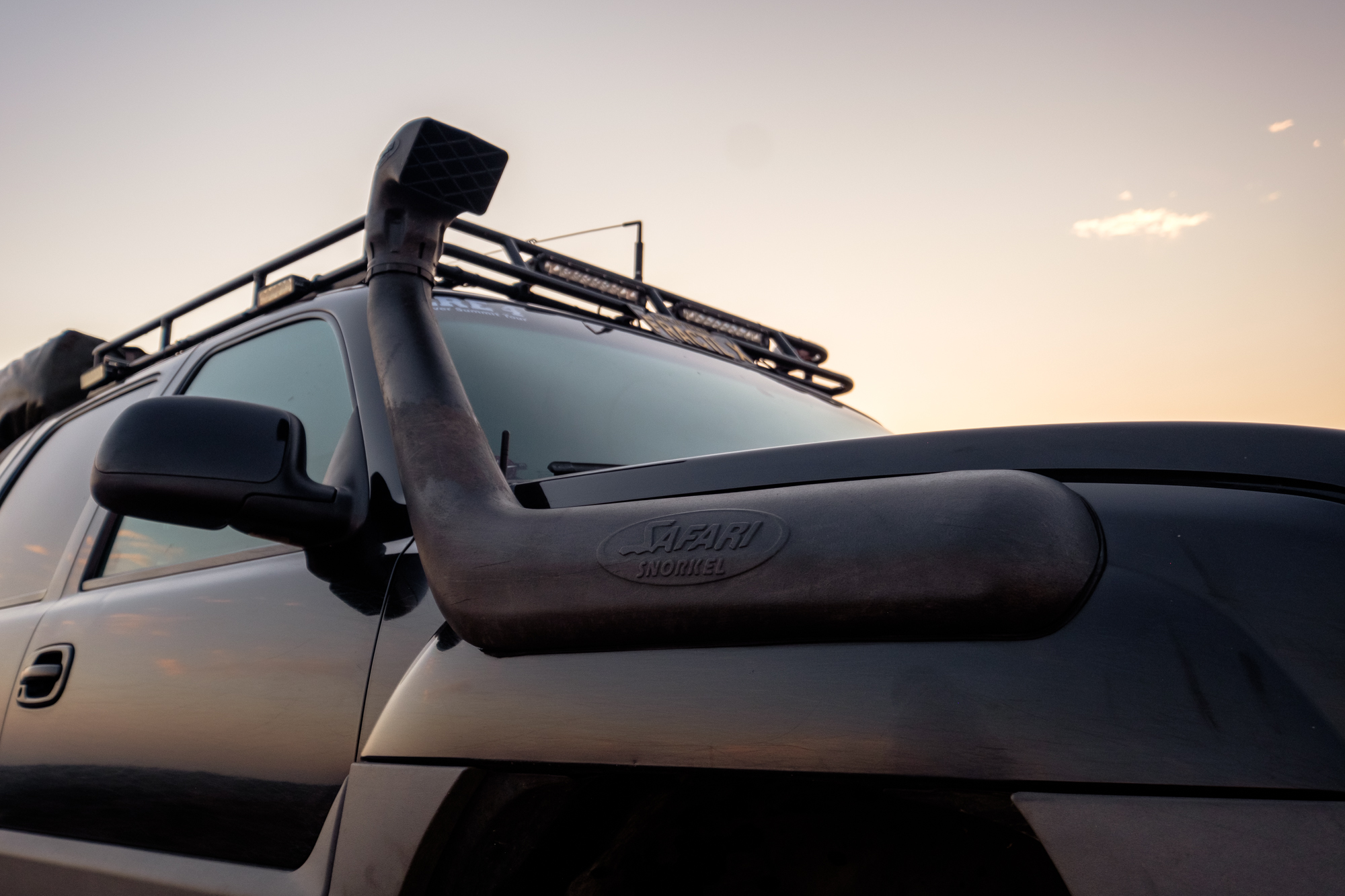 You know things are getting serious when you install a Premier power welder under your hood, but when you break suspension mounts a hundred miles from the nearest help, it can all of a sudden seem quite practical.

Other forms of recovery are more common than welding failed components, of course. For those situations, the Avalanche houses a Warn Zeon 12-S winch with Spydura synthetic rope and a wireless remote kit. This is paired with a Factor 55 Flat Link Pro and a full suite of ARB recovery gear. Two pairs of Maxtrax recovery boards are kept on board for soft-surface recoveries, and an Extreme Outback tire repair kit and ARB Dual Compressor will keep things rolling in case of a flat. Powering all of those electronic components is a dual battery system with an Optima Red Top and Odyssey 34/78 auxiliary battery. Both are charged by a 225A Powermaster alternator. 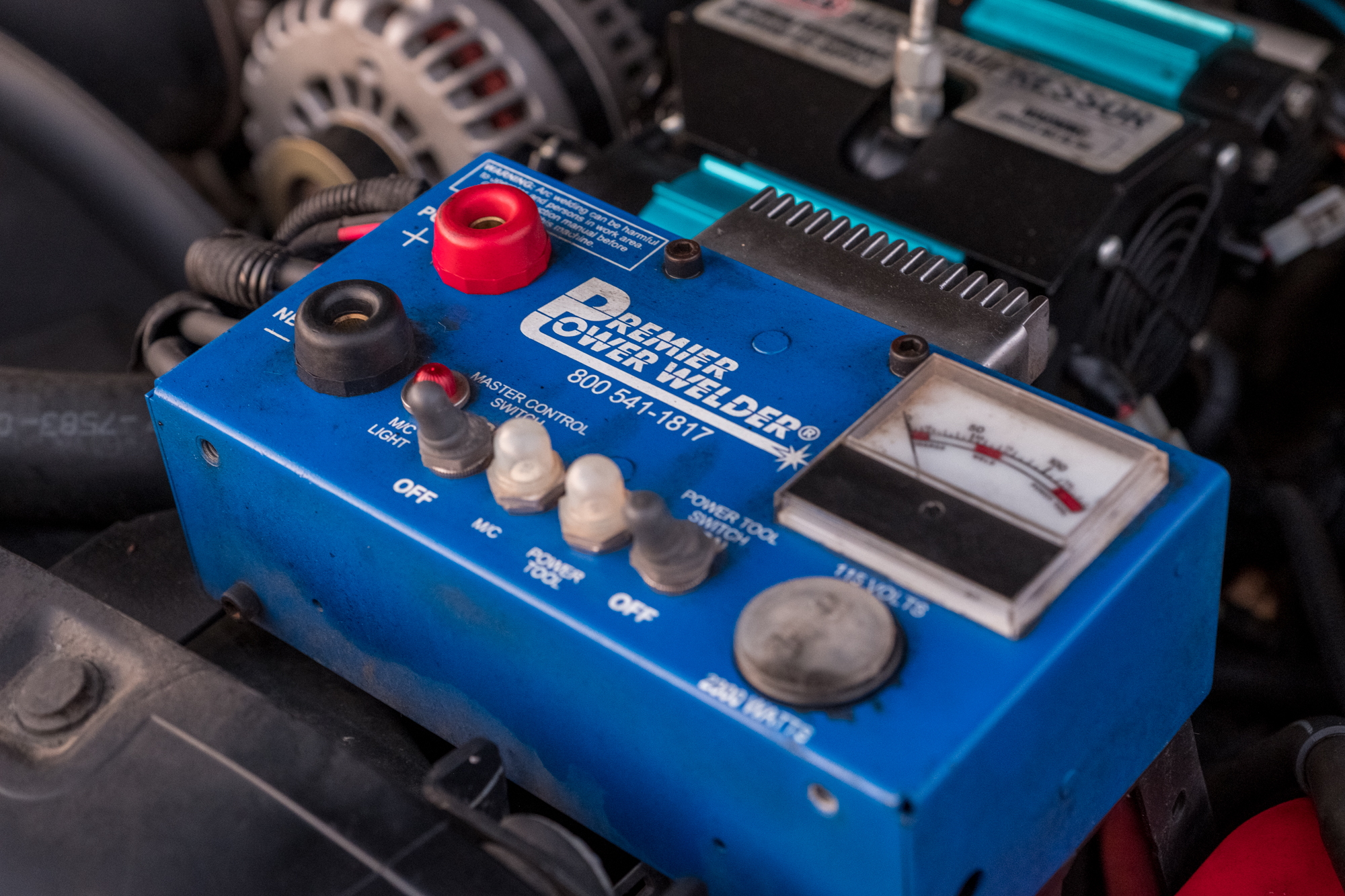 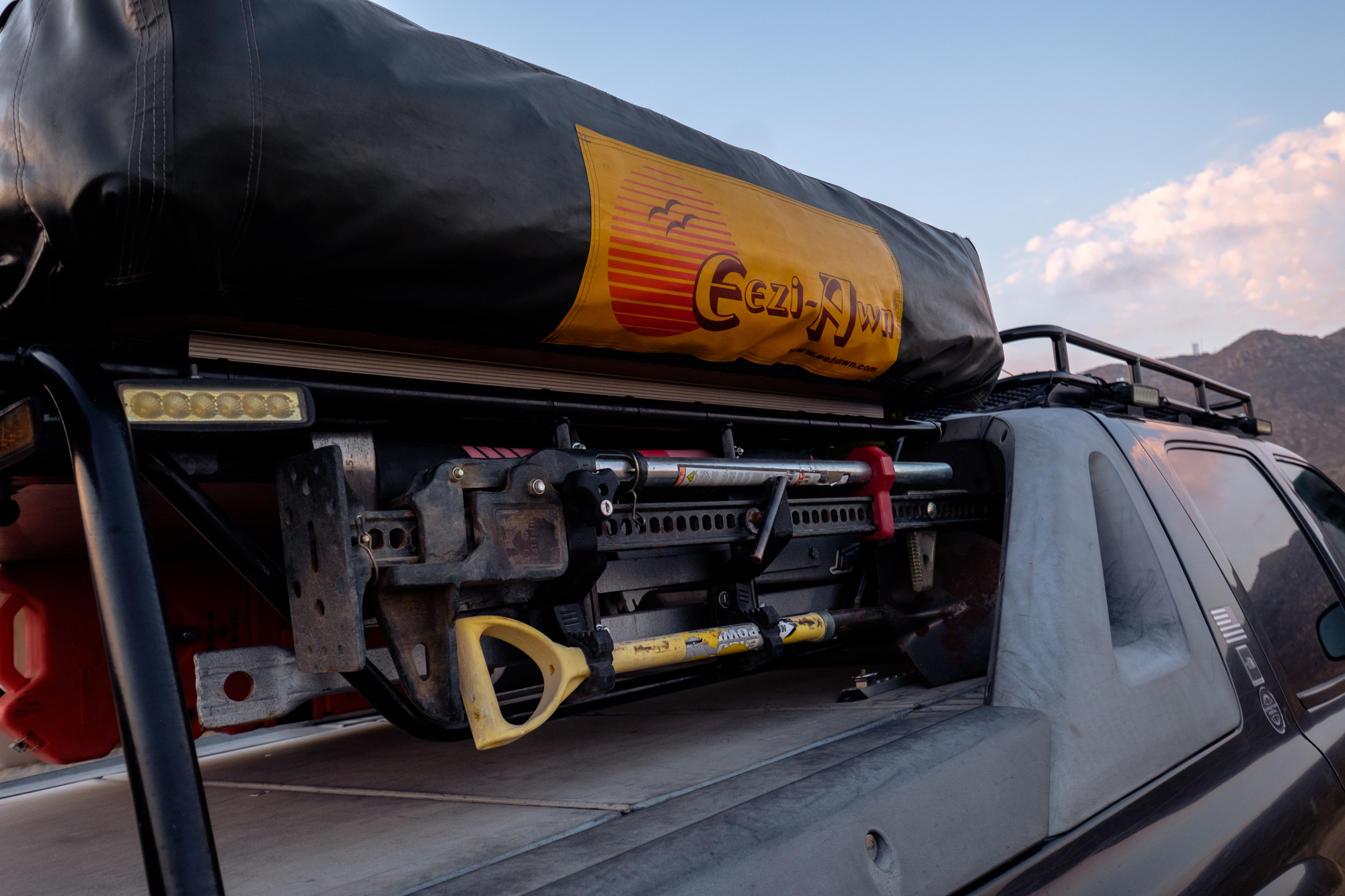 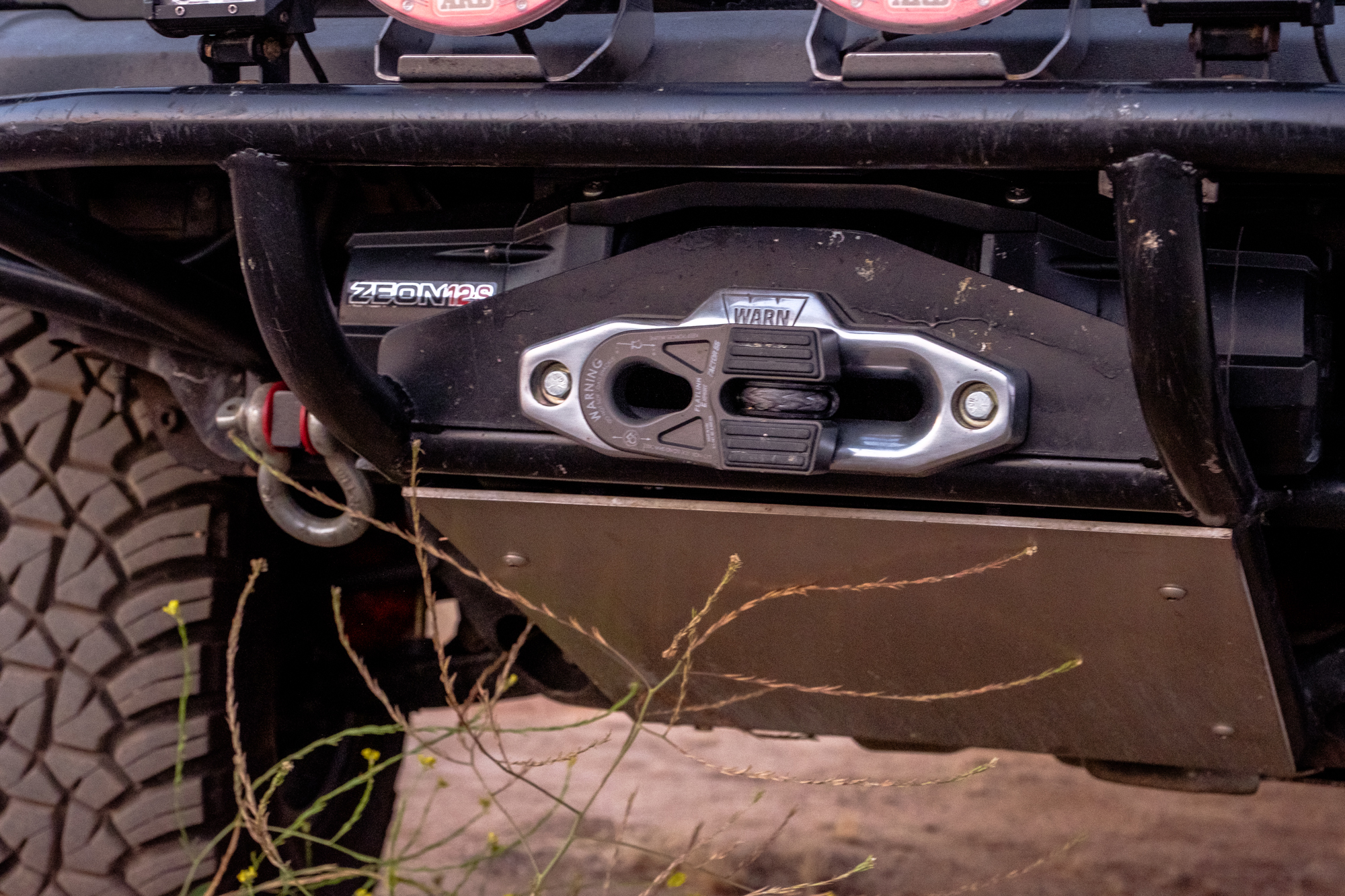 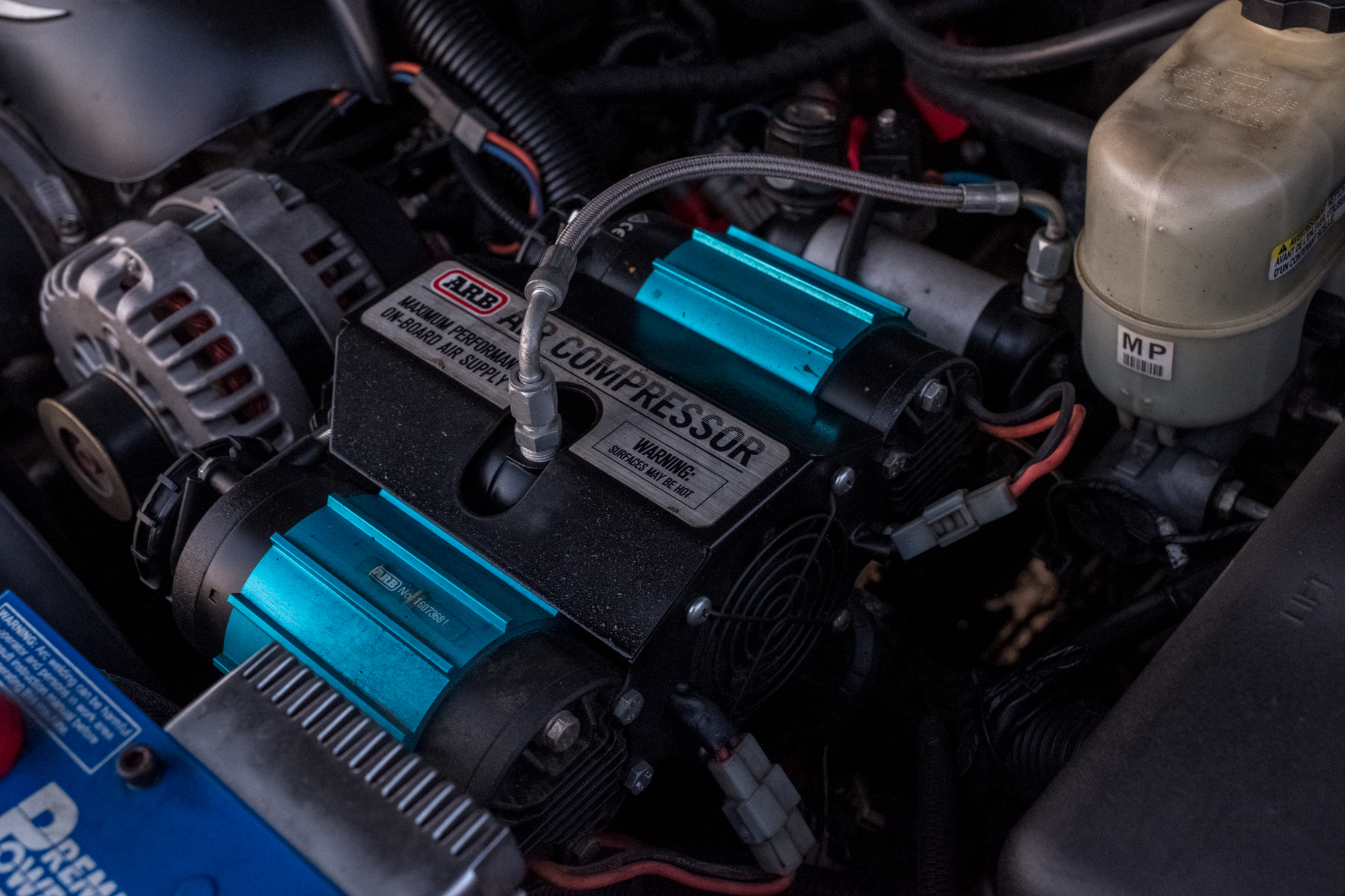 So now we finally get to all the overland goodies. After all, if you’re going to be building a truck for travel, you want it to be comfortable, right? For Bill, that started with back and body support in a set of Scheel-Mann Vario F Seats with top and bottom heaters. He paired these to Corbeau seat belts, and a custom fabbed center control console by BB Fabworx to clear the armrest of the Scheel-Manns. In that console, he integrated everything for communications and navigation, including a Yaesu FTM400-XDR, Garmin InReach, a Lowrance GPS and mount for his iPhone. 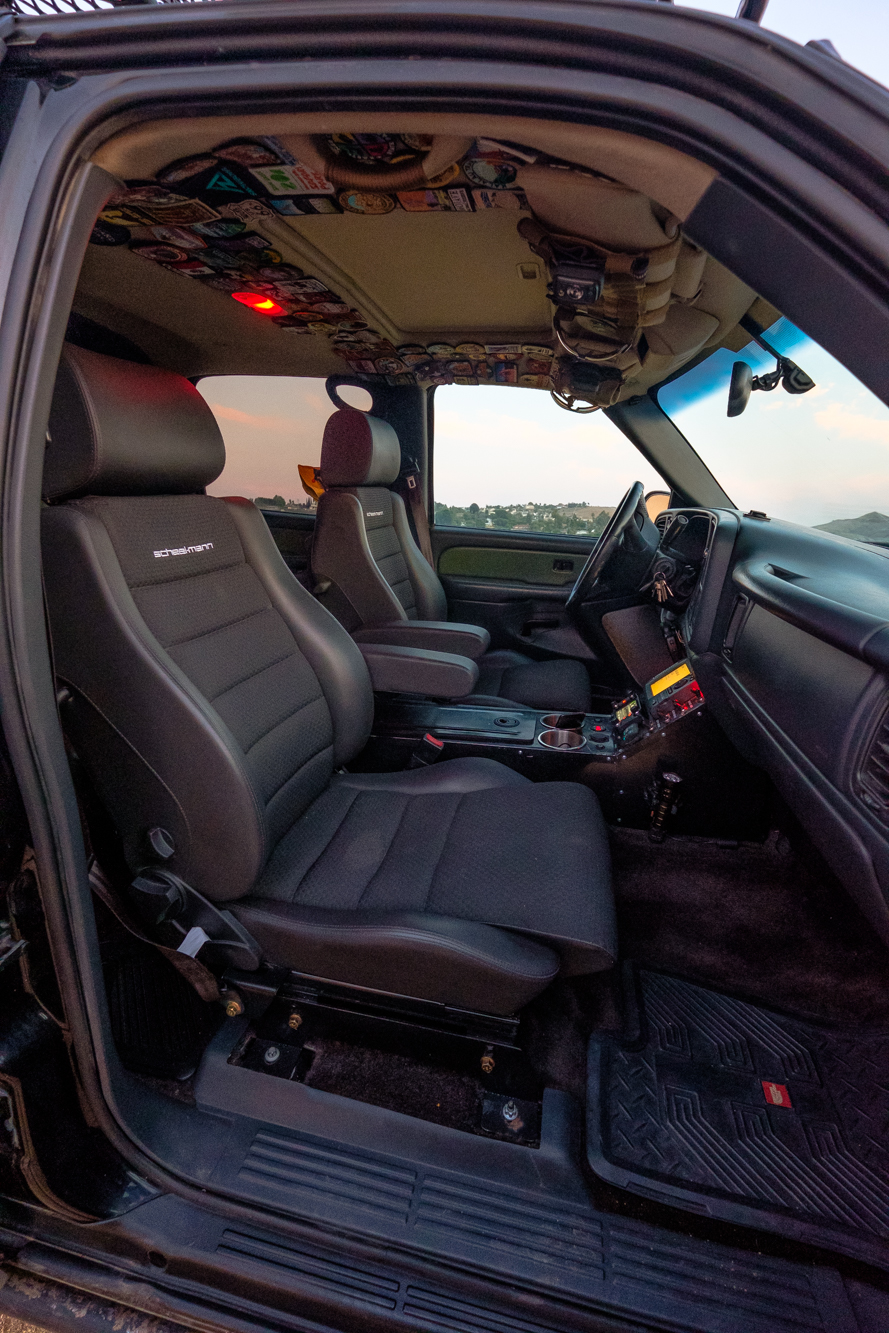 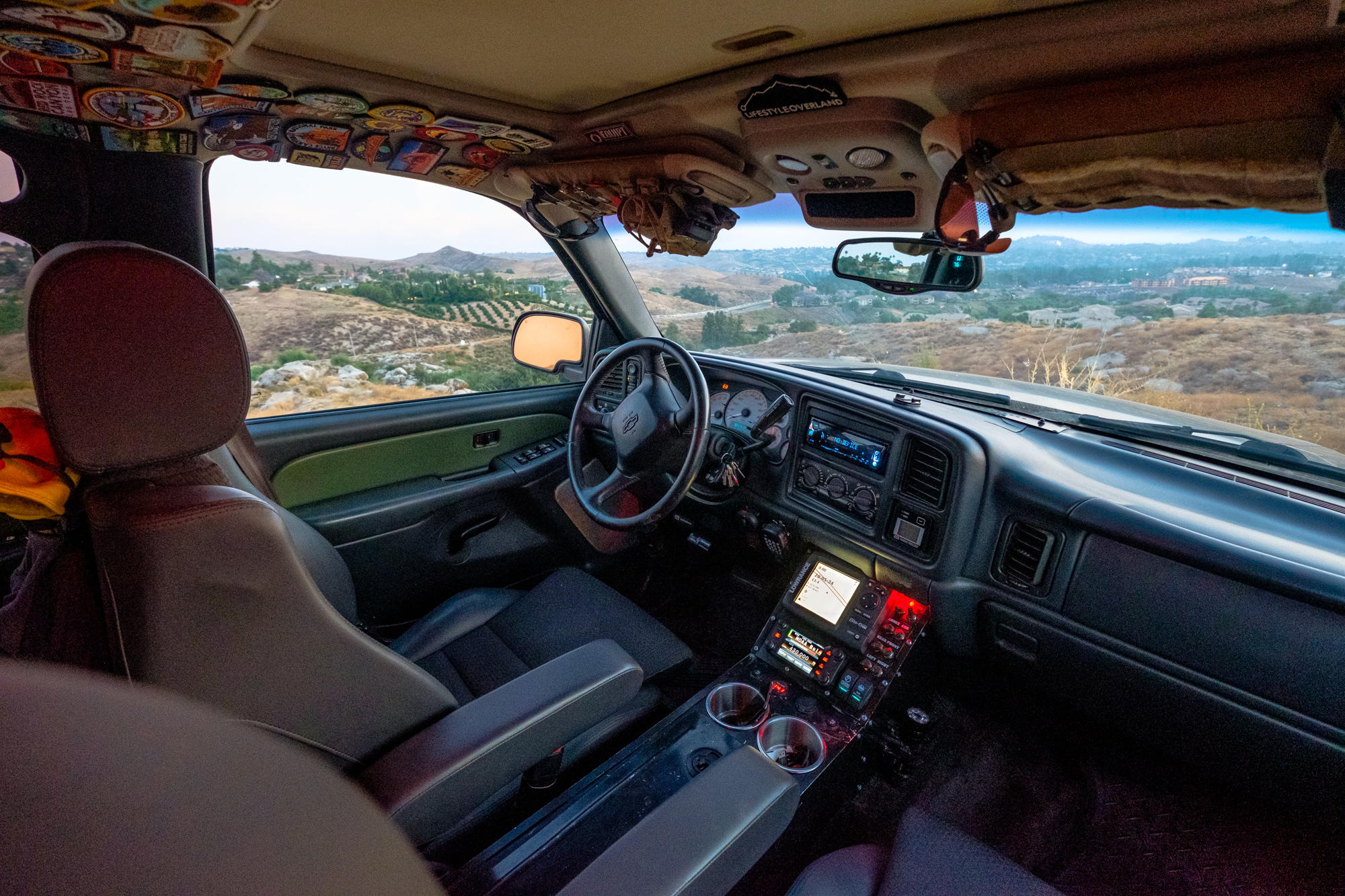 The bed of the Avalanche is even more impressive, though. It carries a custom welded overhead rack with an Eezi-Awn Xklusiv 1400 rooftop tent that has survived storms that ripped neighboring tents to shreds. Bolted to the back is a Rhino-Rack Sunseeker Dome awning that provides the perfect amount of shade over the tailgate on hot days, and a Front Runner Outfitters camp table tucks neatly under the rack. A Hi-Lift Extreme, 11,000-pound PullPal, and Rotopax are mounted down the exterior rails, and it’s worth noting that between the hard-mounted fuel tank and Rotopax this truck carries a total capacity of 46 gallons. Not bad at all. 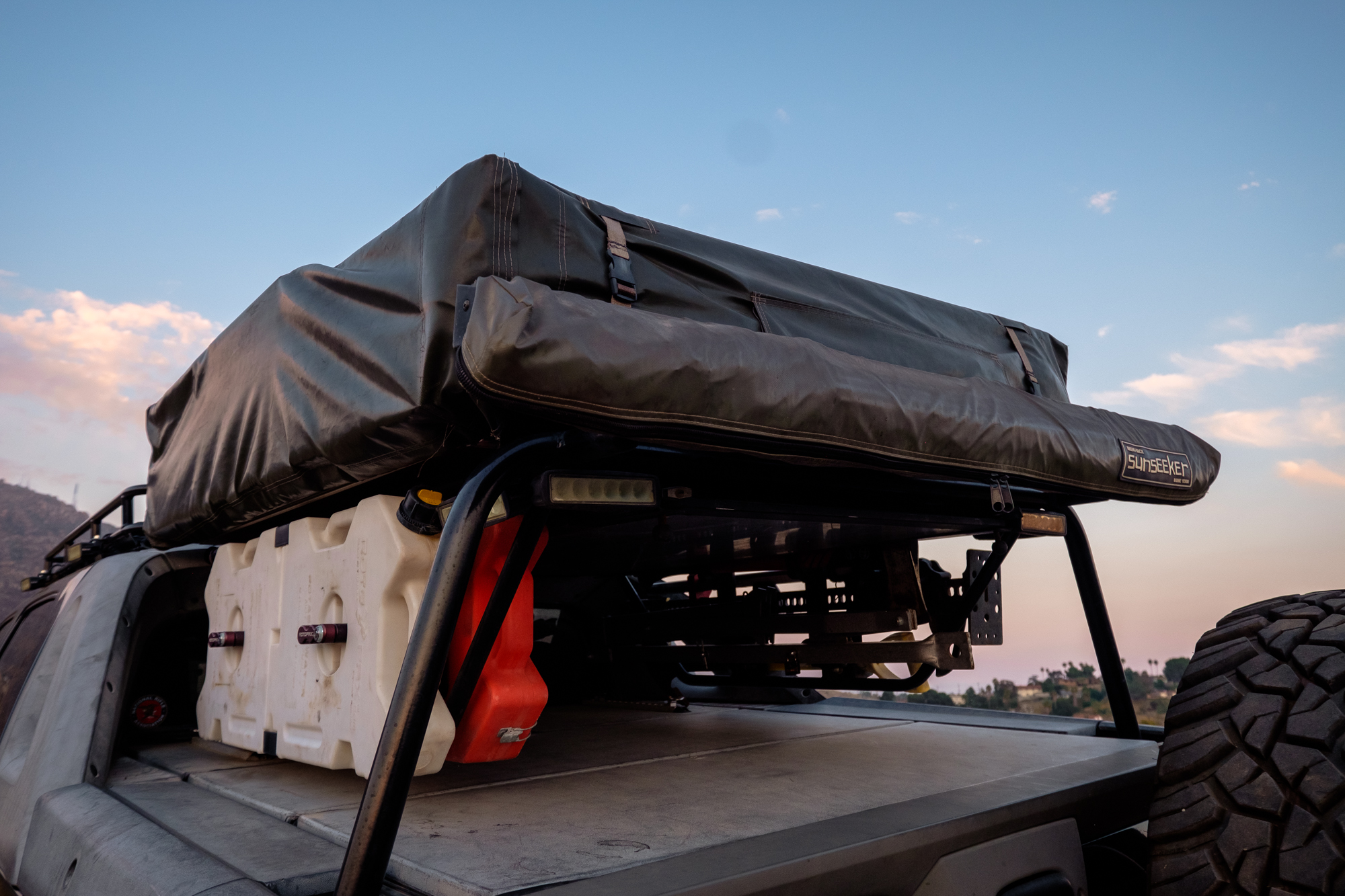 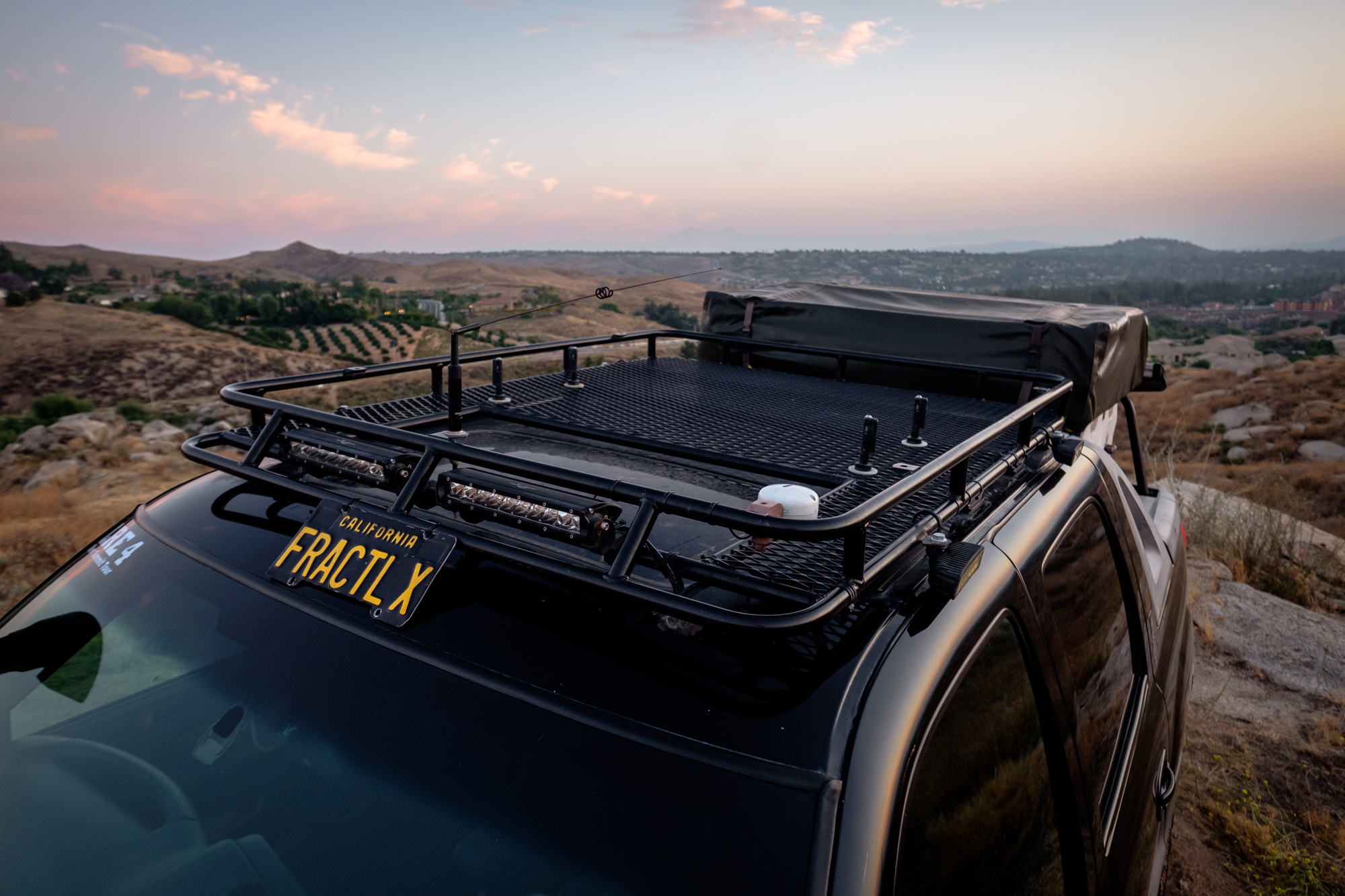 The overhead bed system then ties into the roof rack, which was custom-built based on the feedback from Overland Journal’s roof rack test, combining the best aspects of the ARB and Gobi racks. This rack has a cutout for the sunroof, as well as Microtune LED lights for dune and off-road driving, and ambient campsite lighting on all sides and rear. 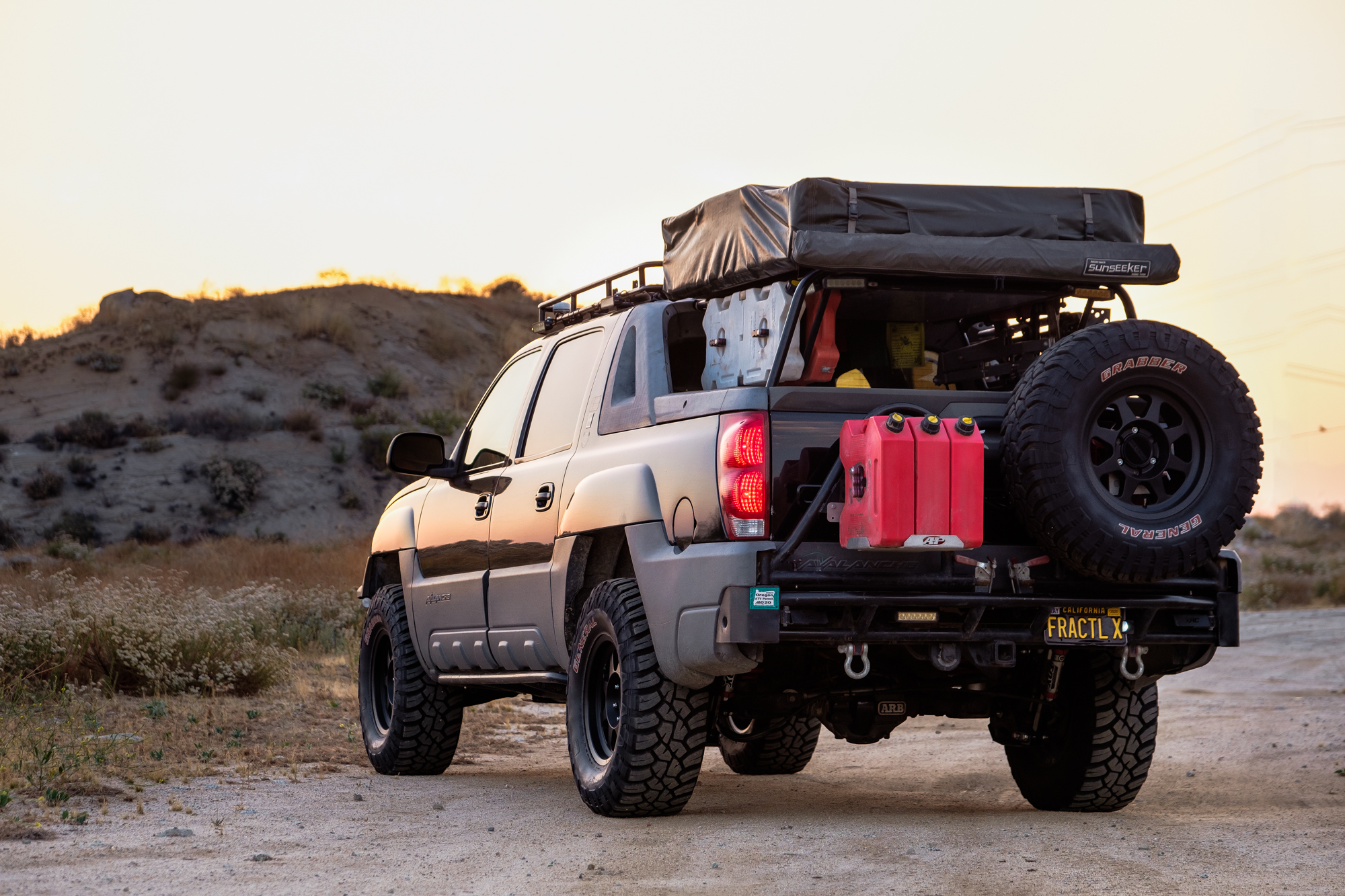 Inside the bed, an ARB 63L fridge/freezer is mounted on a slide for easy access next to a LifeSaver jerry can 20000UF water filtration system. This filtration system can be used to fill the available 9 gallons of onboard water. The bed also houses eight Front Runner Outfitters Wolf packs filled with tools, clothing, personal belongings, a Coleman dual-fuel stove, kitchen kit, etc. Larger spares and welding equipment are carried in a Zarges case. 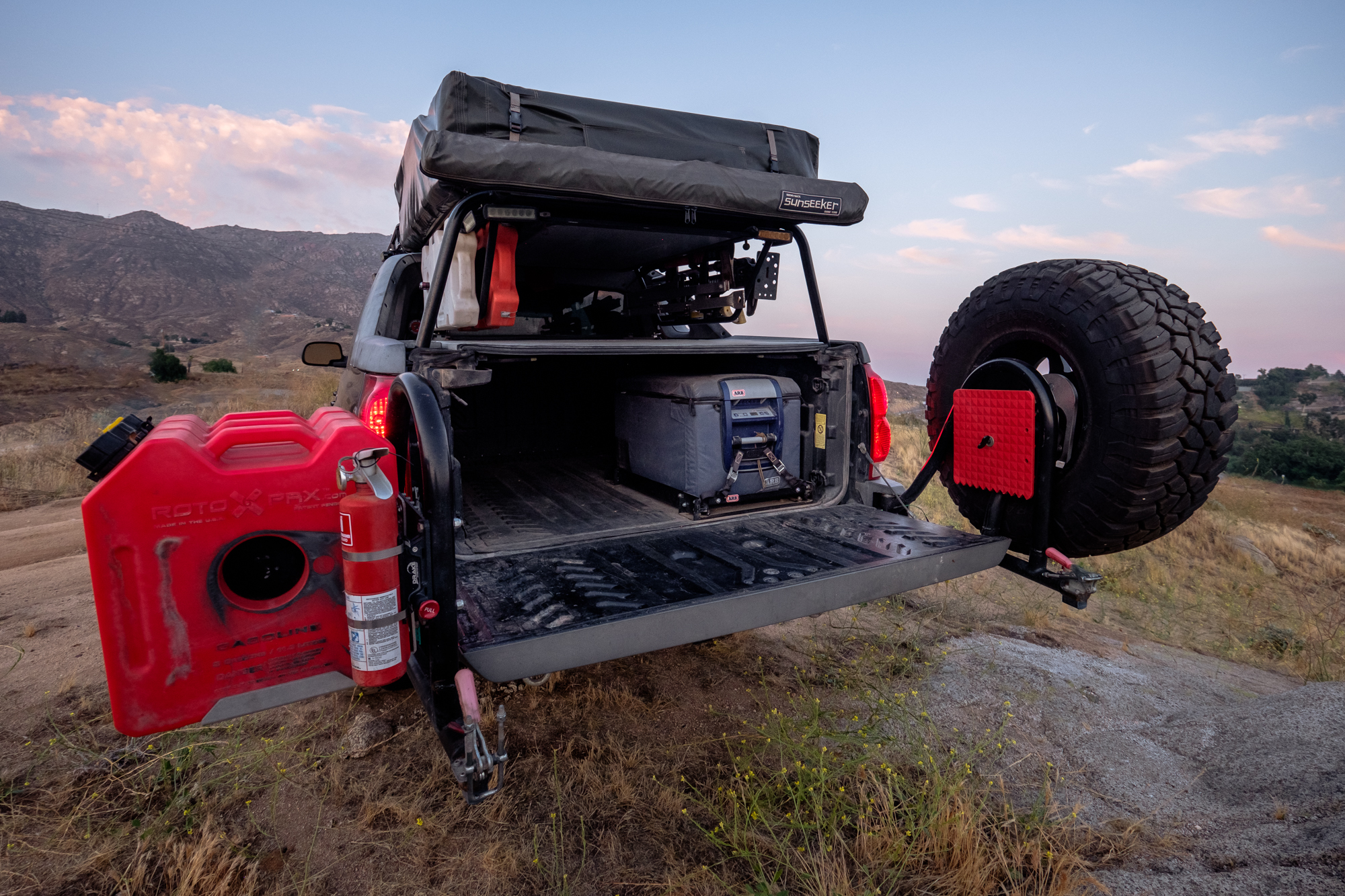 Bill’s Avalanche gets its name from the British-formed Long Range Desert Group (LRDG) that navigated the vast Saharan and Libyan deserts during WWII. While they operated a range of vehicles, it was actually the Chevrolet truck that proved the most effective thanks to a superior range that allowed it to penetrate deep into enemy territory. During the Barce Raid, one of the group’s greatest attacks, only a single hardy Chevrolet survived before crossing 900 miles of unforgiving desert to return its crew safely to their home base. The name of that truck was Te Anau II. It goes without saying that Bill’s 2002 Avalanche doesn’t even share a bolt with the original Te Anau, but the name seems appropriate nonetheless. His Chevy is a beast of the desert: self-reliant, rugged, and, without a doubt, unique. As chance would have it, Bill was also born on the 25th anniversary of the original truck’s return to base.

At the end of the day, I would never make an Avalanche my first choice for an overland vehicle, as its lack of aftermarket support makes it an expensive and time-consuming choice to make. However, Bill has proven that with dedication, it can become a formidable tool on the trail. If there’s one thing this build reinforces, it’s that you should drive what you like, run what you brung, and most importantly, remember to enjoy the journey. 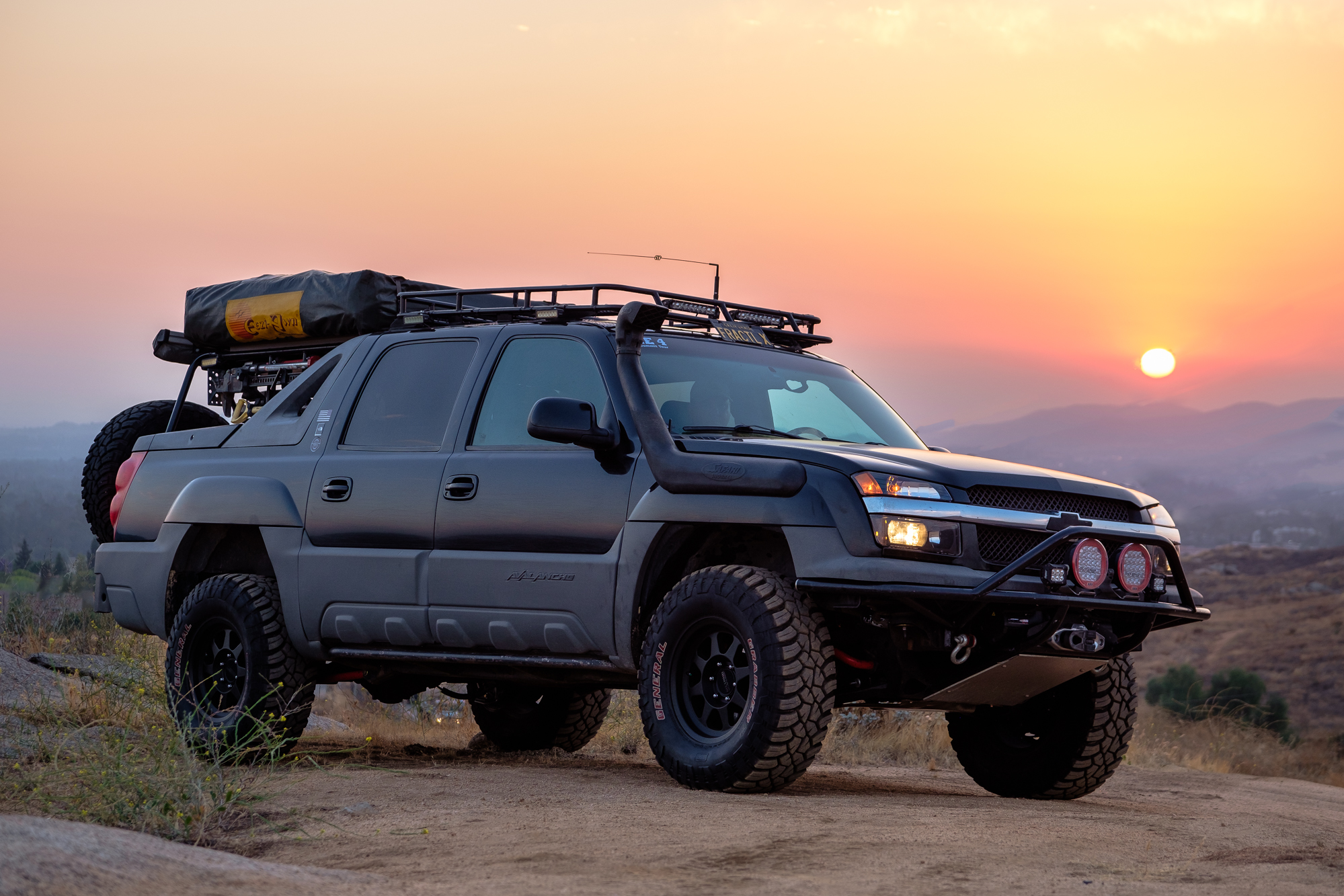