Today we learned that the astronauts of the original Apollo mission to the moon were quarantined upon return as it was feared that moon-based pathogens may have traveled back to Earth with the spacemen. They were quarantined in an Airstream travel trailer. And, did you know that a caravan of silver caravans made the arduous journey from the USA to Central America in the 1950s, led by Airstream founder Wally Byam? Mr. Byam subsequently shipped his well-traveled silver bullet tin can (painted gold) to South Africa and pulled it up to Europe; you just know he slept well at night. Today was also the first time I have seen a black and white photo of a small but evidently powerful Frenchman towing an Airstream down a Californian airport runway. By bicycle. 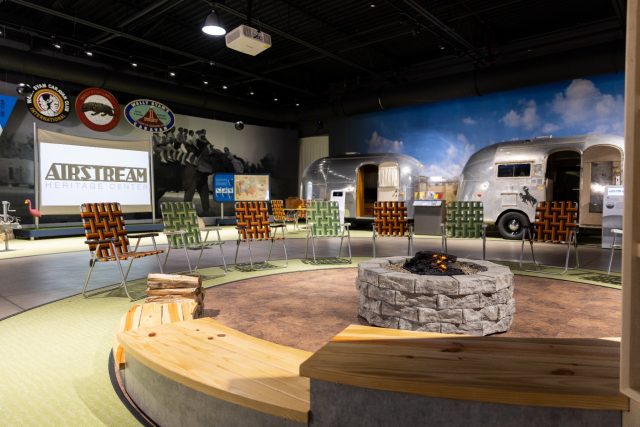 The Airstream is a global vehicular icon much like the VW Beetle, Jaguar E-Type, Ford Mustang, and Land Rover Defender. Wherever these icons are on public display, you will find rivet counters drooling over the objects of their desire. Well, as of last month, we can all drool over the iconic Airstream in the same place, together. In case you were curious, every Airstream travel trailer has an average of 3,000 rivets in the trim, walls, and even the interior fixtures. 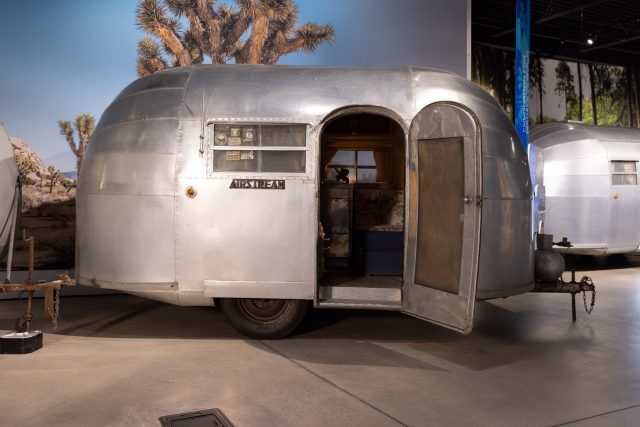 “For years we’ve been looking for the right way to celebrate our history, and our new Heritage Center is a testament to the products that inspired generations of travelers, and the people who built this brand into an American icon. The vintage models, mementos, journals, and films on display vividly illustrate how an Airstream is more than simply a recreational vehicle–it’s a vessel that holds the stories accumulated over years of travel and adventure.” –Airstream President and CEO Bob Wheeler

The Heritage Center aims to bring Airstream’s colorful history to life in a museum space that highlights over 90 years of globetrotting adventures and innovation while celebrating the thousands of associates who have since, 1931, helped build Airstream’s by hand. Visitors can expect an immersive brand experience throughout a 16,000 square-foot exhibit area dedicated to the individuals and iconic Airstream products that helped shaped the company’s past and inspire it’s future. The Heritage Center celebrates the life and work of the company founder via the Wally Byam Collection which includes rare childhood portraits and notebooks where he sketched ideas for his initial Airstream concepts and designs. 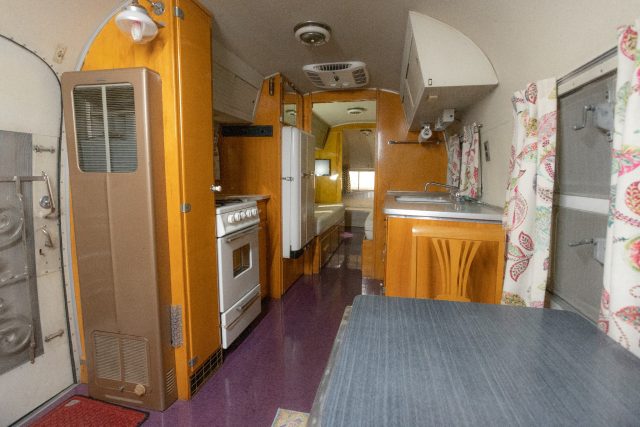 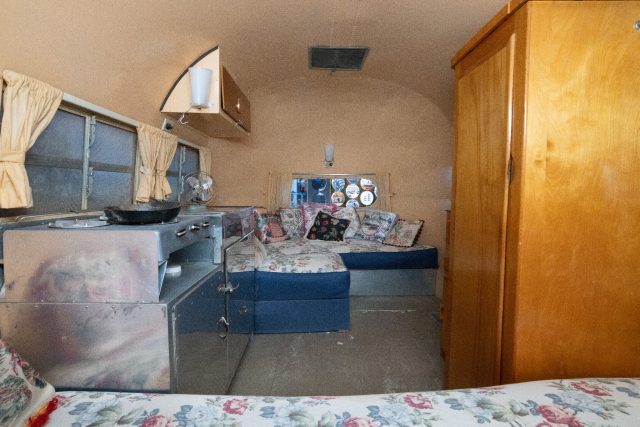 Additionally, there are more than 15 vintage Airstreams on display, including a 1938 Clipper (an example of the first riveted aluminum Airstream model), and a painted Argosytravel trailer—the gold Airstream Wally Byam used to lead the Capetown to Cairo Caravan. 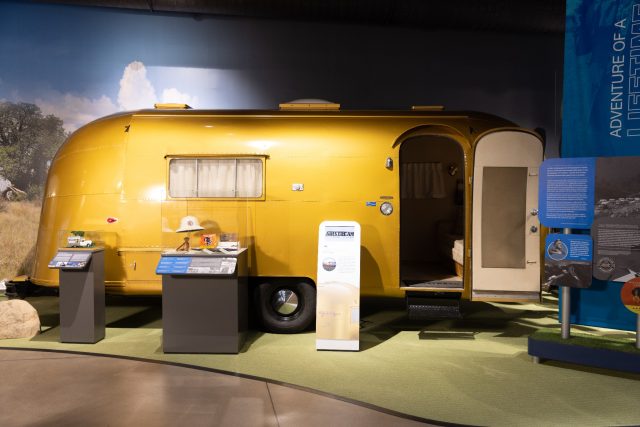 Visitors will also have the opportunity to enjoy Airstream’s collection of original films and photographs of caravanners traveling around the world which tell the story that began with the first Airstream Caravan in 1951, today as popular as ever. Selections from the Airstream Archives on display document over 90 years of company history, including product testing films, brochures, engineering drawings, newspaper articles, and the plans for NASA’s Mobile Quarantine Facilities which housed our heroic astronauts. 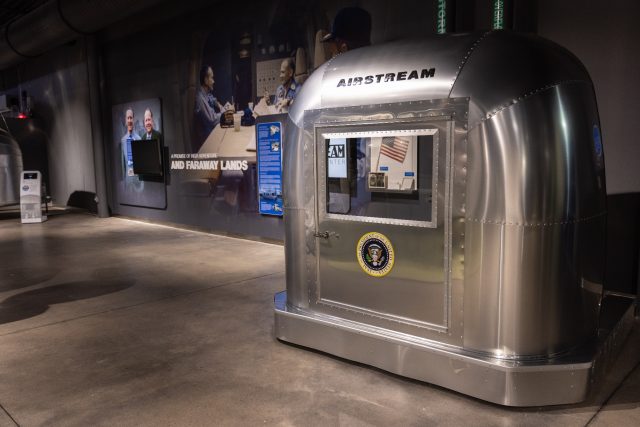 One of Airstream’s most cherished collections in the Heritage Center is on display thanks to the donation of Dale “Pee Wee” Schwamborn on behalf of his mother’s estate. 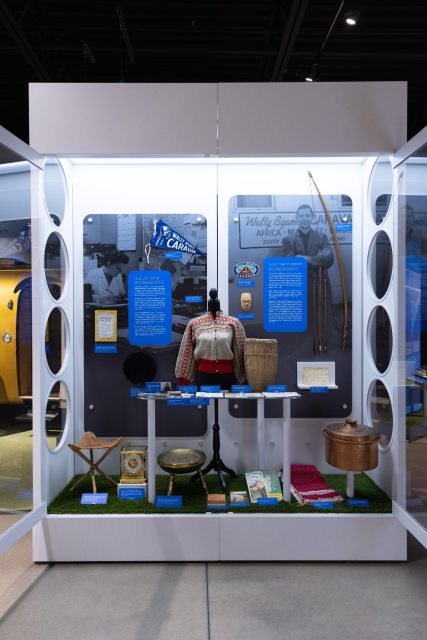 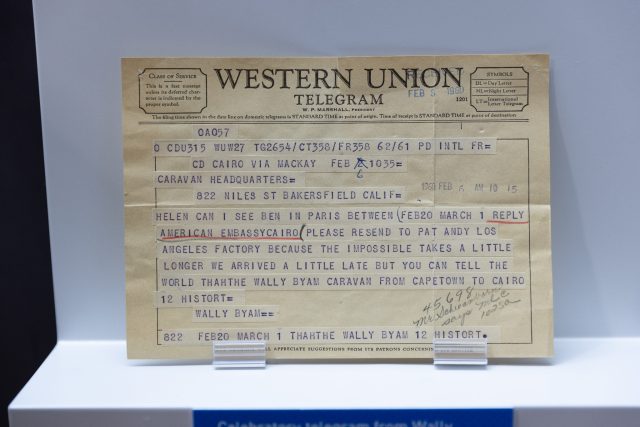 So, dust off those maps and get some gas in the old Ford. It’s caravan time!

For more information about the Heritage Center visit airstream.com.