It’s been about a year since I pulled the trigger on change, and leading up to it were years of driving iconic Land Rovers and even an extremely impressive American Expedition Vehicles (AEV) Jeep Wrangler. Previously, I had owned a NAS Land Rover Defender 90 and 110, several Range Rover Classics, Land Rover Discovery I’s and II’s. and when this new-found change came, I was driving a well equipped Land Rover LR3. I suddenly realized I was growing older and was finding my love for the truck standing in the way of owning what I needed to meet my family’s needs. 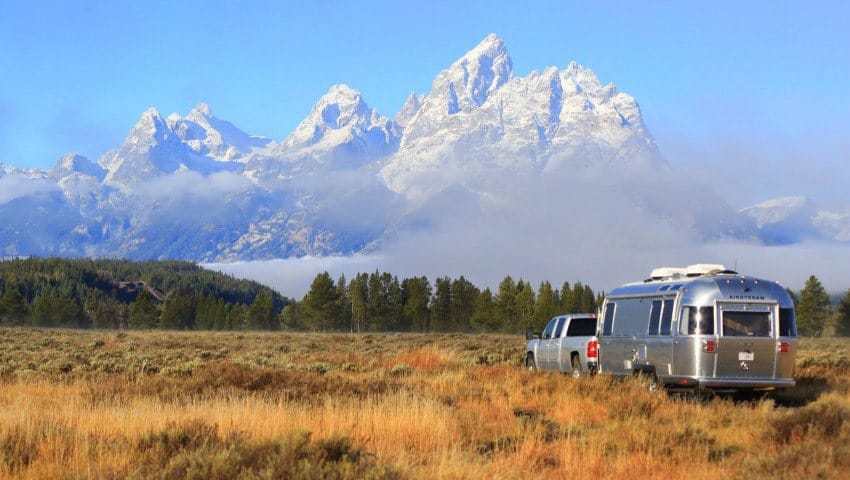 Overlanding holds as many different definitions as there are people who embrace it. As a believer in Tread Lightly principles, I was never into off-roading for the sake of going “off-road”. My family likes camping and getting away from the crowds. We prefer to be off the beaten path, but we can camp anywhere. Around 2008, I acquired a Conqueror Conquest South African camper. It was basically a very well constructed box trailer with a roof top tent. While certainly a step above “tent” camping, it was still primitive in many ways. As we (and our kids) grew, climbing the ladder to ‘nest’ was growing old. A few years later, I had the opportunity to own a Conqueror Commander. It was one-of-a-kind in the States (at that time) and we truly enjoyed it, but it lacked amenities. Because we live in a warm climate the absence of air conditioning limited our camping season to spring and fall unless we climbed in elevation (and in the South … you can only go so high). The doors lacked screens, there was no bathroom, the awnings were time consuming to set up, and most of all due to the declining ability to access remote locations in the South, we found that we could camp almost everywhere in a better equipped trailer. We would just set up base camp and then go off to explore. 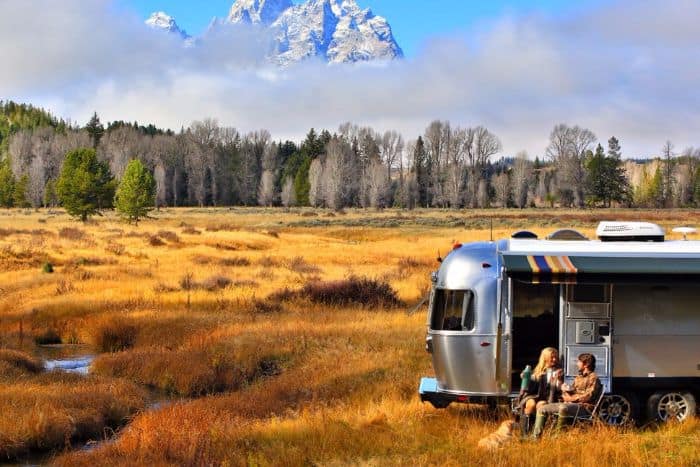 When things got a little unstable with my job, I decided to list the trailer. Luckily the job front panned out, but I was getting dozens of e-mails of interest in the trailer. I decided to go ahead and sell. Once we had a solid buyer, I looked to my wife and said…”now what?” We had a long discussion about our needs when it comes to overlanding and camping. I had shared with her that my passion and wanderlust had come from spending summers on the road with my grandparents in their Airstream. They took me all over and there were some very fond memories created. My wife instantly stated that she had always wanted an Airstream, so the challenge was issued. 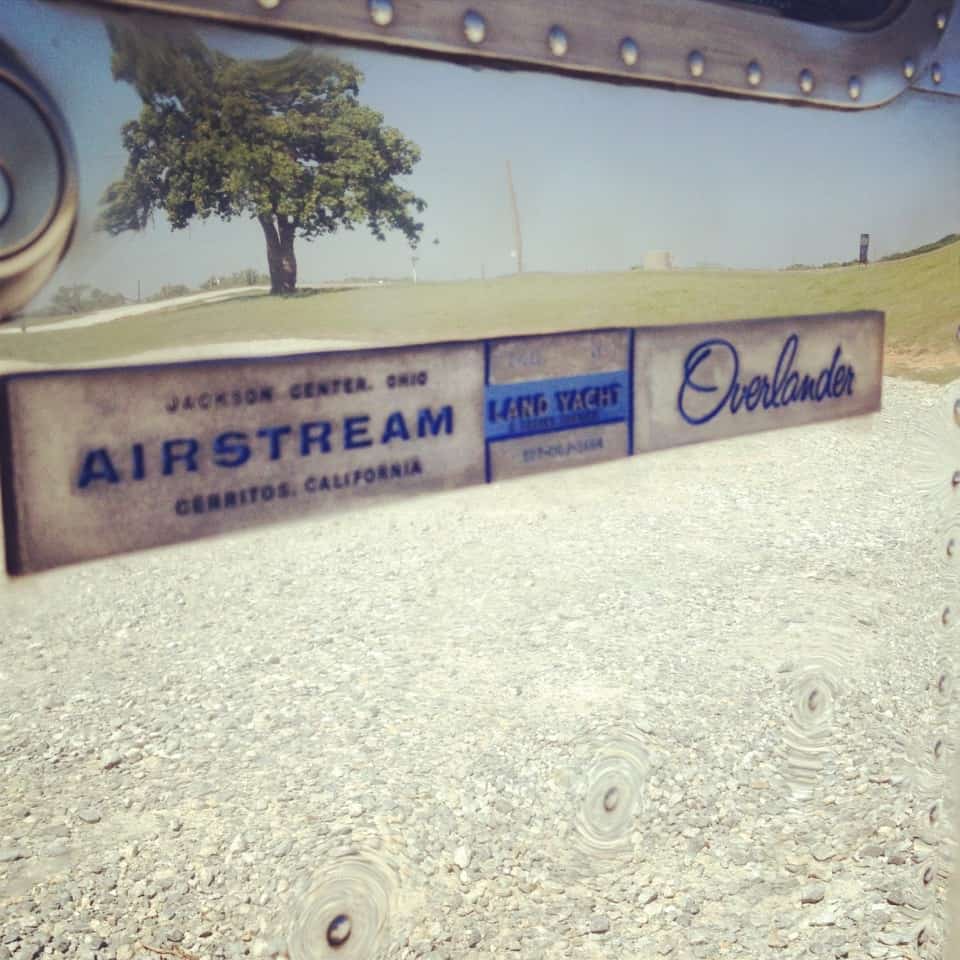 I didn’t want a project. I wanted a trailer that met our needs and lifestyle, and since Airstreams can be a big investment, I determined we’d get what we wanted. Quick research landed on the Limited Edition Eddie Bauer model, specifically a new 2015 25’. What makes the Eddie Bauer unique is that the rear of the trailer has a lift door with a roll down screen. It opens the trailer to the outdoors like no other model (except the newer Pendleton). The interior is adorned with Eddie Bauer bedding and throw pillows, the seat cushions are all Sunbrella Canvas, and the floor is one piece of stipple rubberized material that is easy to clean and water/mud safe. Additionally, all the seating folds up against the wall and there are tie downs for a canoe, kayaks, a motorcycle, or whatever else you may want to transport on the interior. We didn’t purchase it for that reason, rather we just wanted the access hatch in the rear to enjoy the open feel. 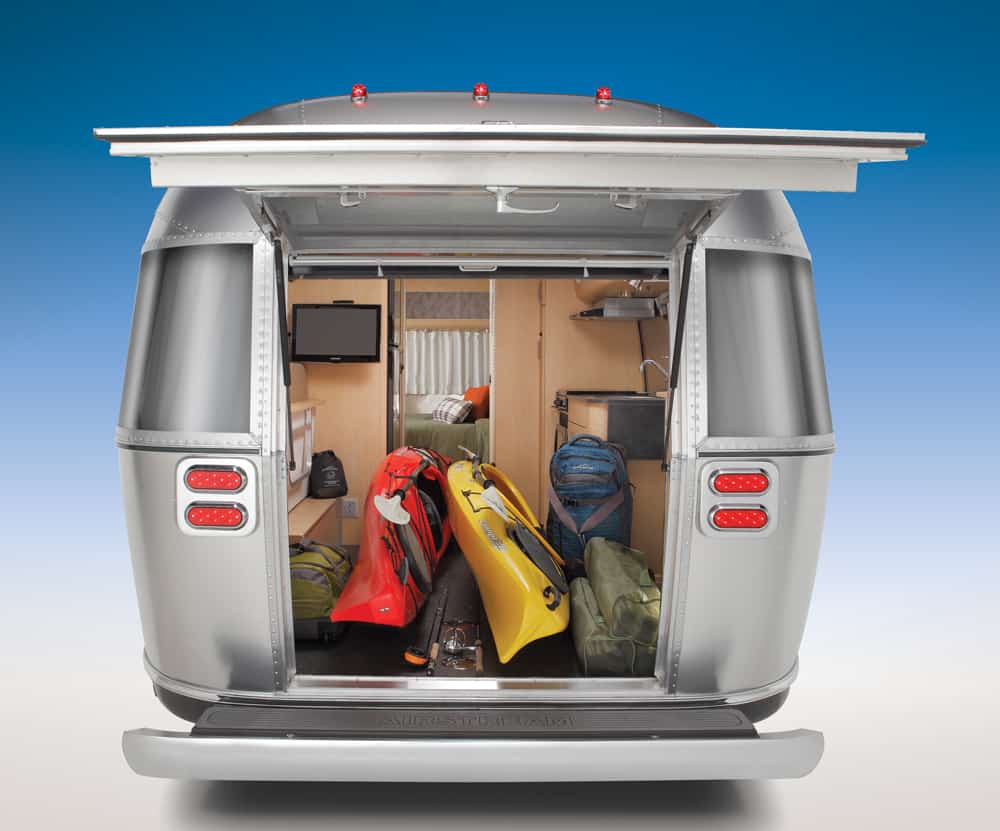 So the trailer was ours, but what to do about a tow vehicle? When we acquired the trailer, I had a very well equipped 2009 LR3, but the towing capacity of the truck was only 7800 lbs. The dry weight of the Airstream was 7300 lbs., so I felt I would be pushing the upper limit of not only the towing capacity, but also the braking. Someone recommended that I look at both the Ford F150/F250 as well as the Dodge Ram AEV. A trip to the local Ford dealer (mentally set on a new F150 4X4) saw me home with a petrol F250 4X4 (my commute to work is too short to be practical for a diesel—less than two miles). The incentives on the 2015 model were so extreme that I acquired it for less than the comparably equipped F150, and I was immediately sold on its stance and prowess. The interior was comparable to most of the Range Rovers I had owned (and certainly to the LR3) and the towing capacity far exceeded anything else pushing 20,000 lbs. It doesn’t know the Airstream is behind it. 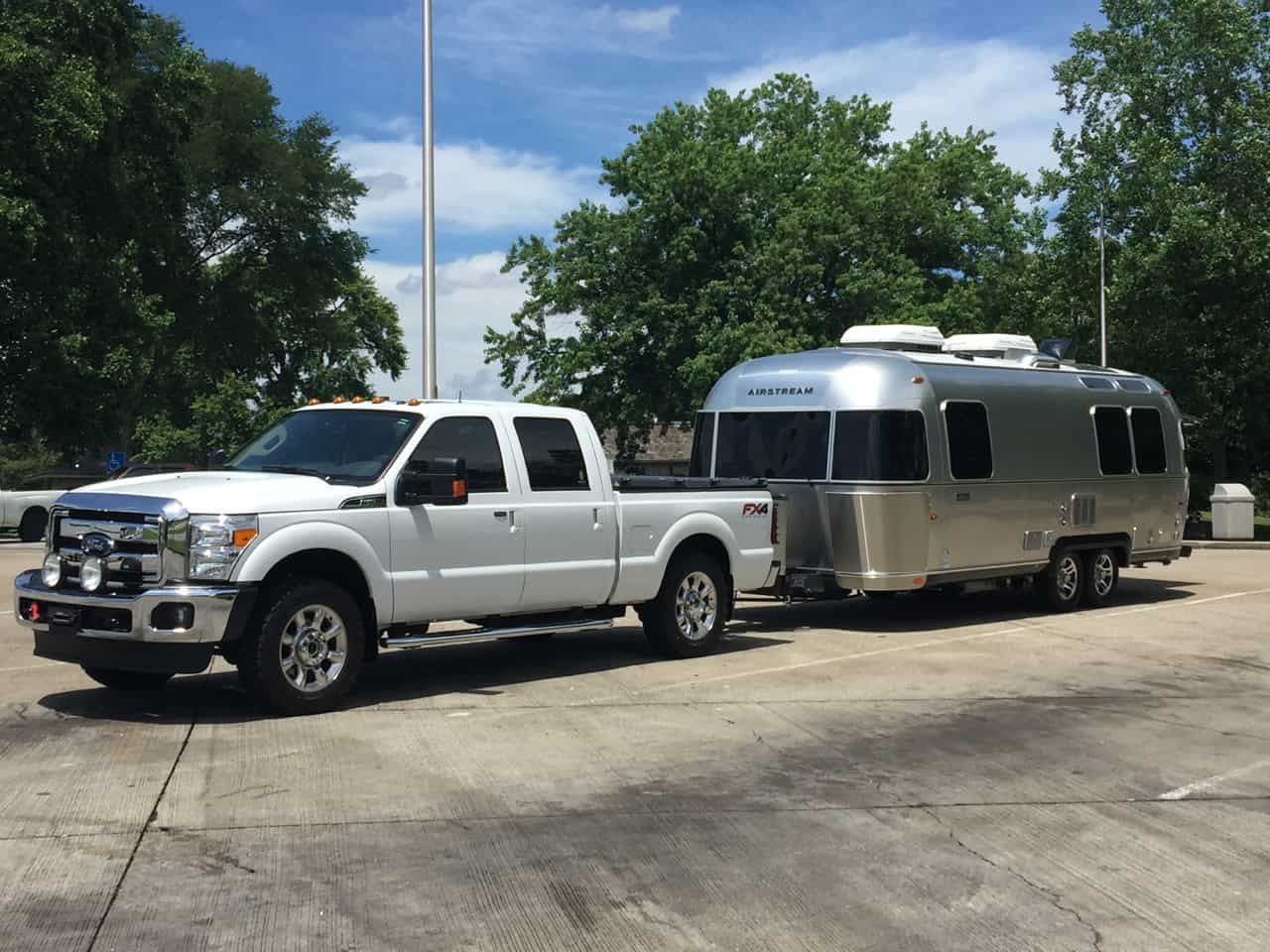 As I was making the purchase on the truck, my wife and I discussed how it would be equipped. Why is it important to point this out? Well, honestly in the past I had never asked for her input on a build. Surprising what you find out when you ask. She preferred something capable but not over built. We both liked the stock look of the F250. In my opinion, it is one of the best looking trucks Ford has put out in some time. So, I decided to go with a Warn hidden winch bumper because it utilizes the stock chrome bumper. Essentially, it extends the OEM bumper 6 inches forward and includes very well done filler pieces to give the truck a factory built appearance. Behind the bumper went a 12,000 lb Come Up winch with a synthetic winch line. And in my way of paying honor to all the Land Rovers I had owned, I placed two Hella 4000 Euro lights wired to have the city light on when the running lights are on. I had these wired into the stock auxiliary switch bank. The result garners questions everywhere I go. Next I replaced the original tires with BF Goodrich KM2s on the stock wheels. I wanted to be able to use the truck bed for utility purposes at home (hauling stuff to and from the hardware or landscape store) while still maintaining secure storage in the rear when travelling. To this end I installed a Diamond Back cover and I’m so glad I took my time to find this capable accessory. It is made in America and reinforced in a way that allows a tremendous amount of weight to be stored on the top (think ATV on the rear cover), but its light weight aluminum construction, UV protective bed-liner, and strategically placed tie-downs make it easy to live with every day. It opens gull-wing style to allow access to the front and rear, and the best part … two people can easily remove either panel, which can be stored when you want an open rear bed. Truly it is one of the best parts of the truck. To finish off the exterior, I added rear light tail light guards. I plan to add a hood black out in time. 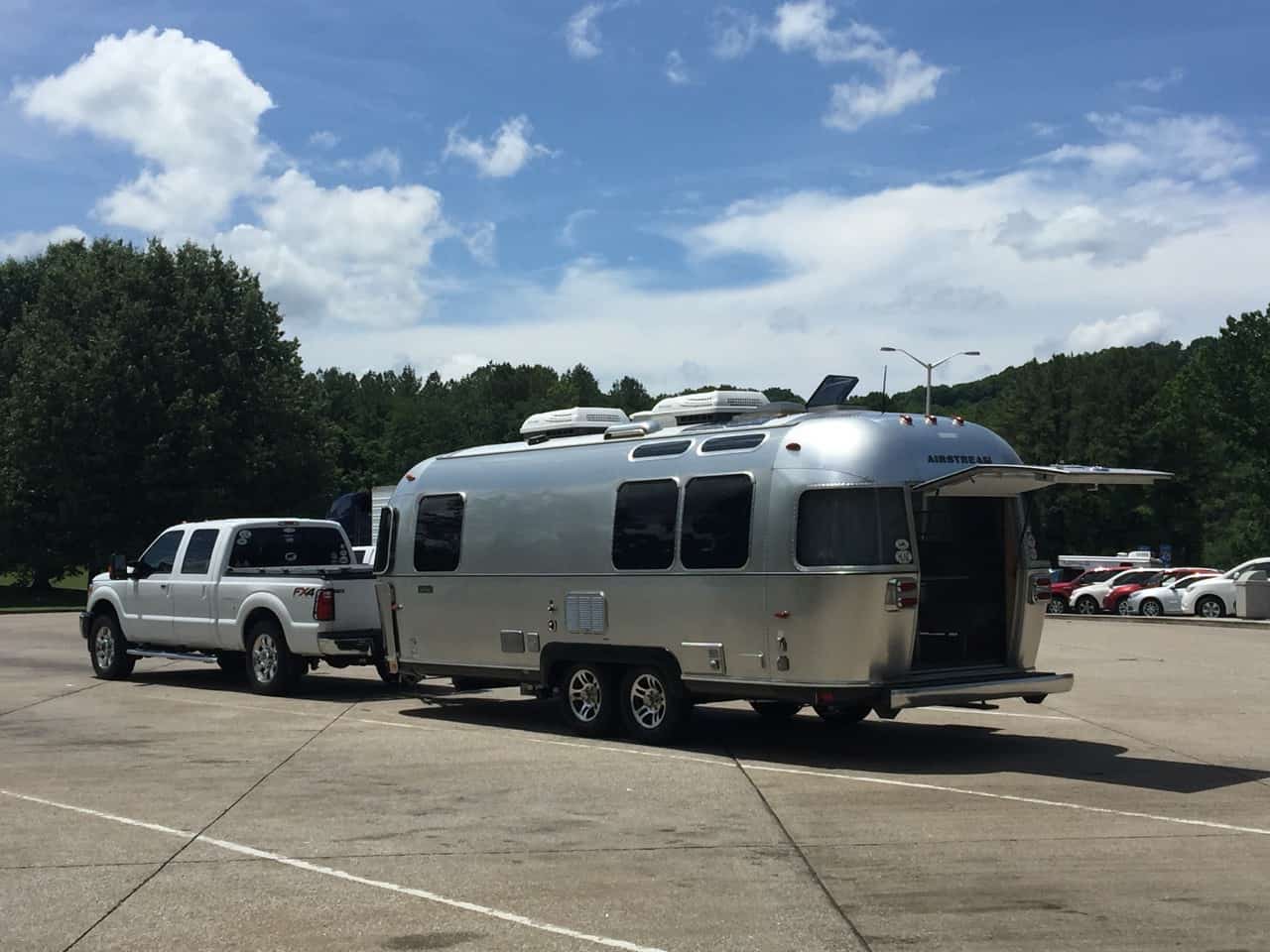 On the interior I added Carhardt Canvas seat covers to the front and rear and Ford F250 heavy-duty rubber floor mats. The canvas seat covers are fantastic and inexpensive compared to covers for Land Rovers. I also added a Wilson Cell Booster to help thwart dead spots.

The result after the first year … I could not be happier. We’ve had the F250 on pretty muddy and rutty back roads at Land Between The Lakes (Kentucky) and some stretches of roads in Western NC. The thing you must remember with a larger truck are the width and break-over angles. I usually go by the motto “when in doubt, get out.” The Airstream isn’t an off-road trailer per se and isn’t designed to be. However, historical photos will show iconic images of the Airstream Overlander traveling through the roughs of Africa and South America as far back as the 1950s.

Interestingly, one of the faster growing segments of over-landing this past year has been full-size pick up trucks. I believe that more and more people are coming to the same realization, a vehicle can and should serve multiple needs. 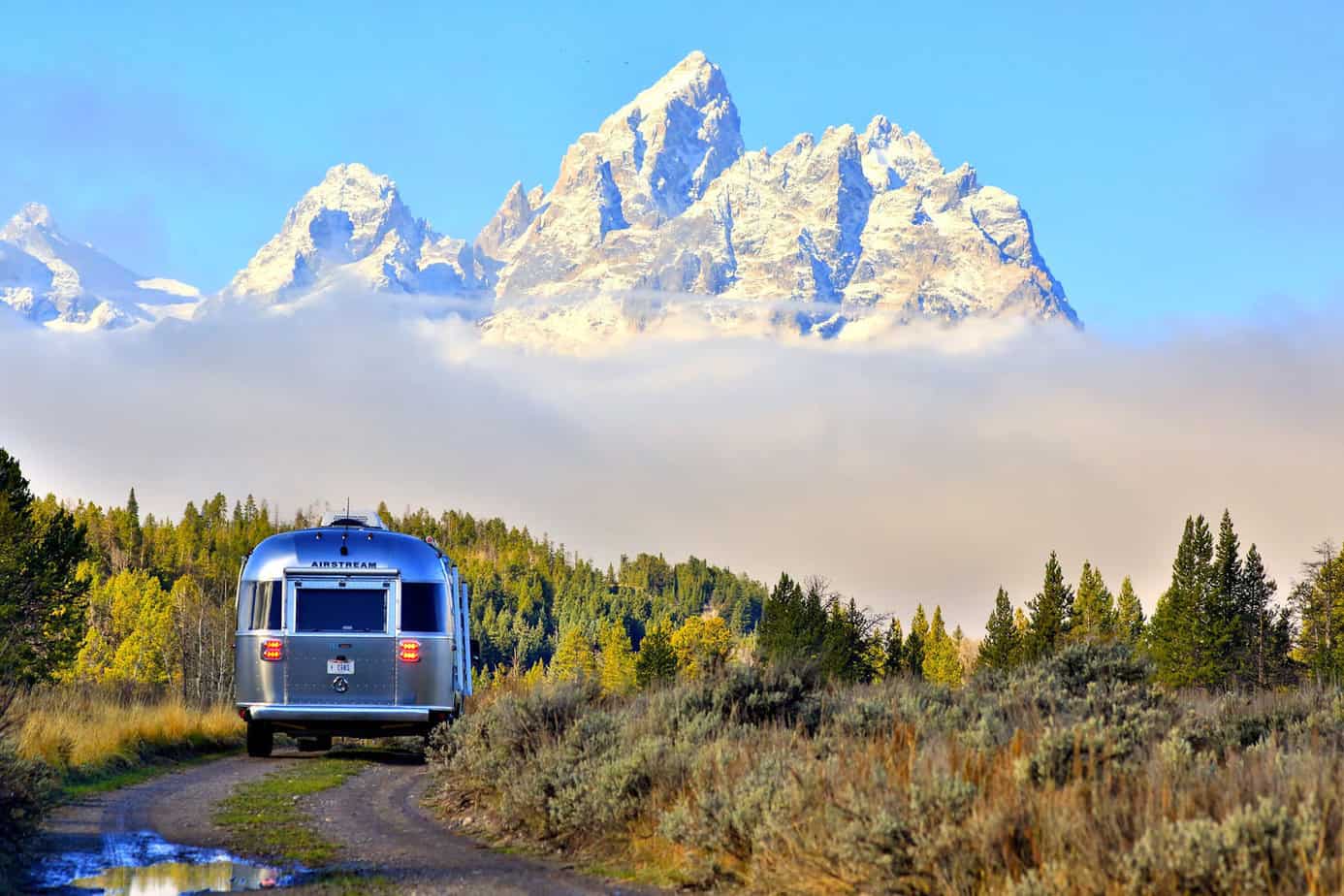 It is important to acknowledge that we are not in a land of unknown places anymore. There are no unexplored territories – except those unknown to you. In the end, overlanding is what you make it. It is about getting out, exploring, and finding new places to visit and see.  Most importantly, you need to accept through aging, growth, and experience what works best for you. For me, it’s about family experiences, and that’s what has shaped my personal progression of overlanding.

Long Way Round: Chasing Shadows Across The World
by Ewan McGregor, Charley Boorman
From $10.99From CAD$19.27

Dendy Jarrett is the Admin for Expedition Portal and resides in Nashville, Tennessee. He loves getting out and exploring new remote locations and camping with his family. He is a contributing author here and an accomplished author with his other passion — music.

A Farewell to Kyle Dempster 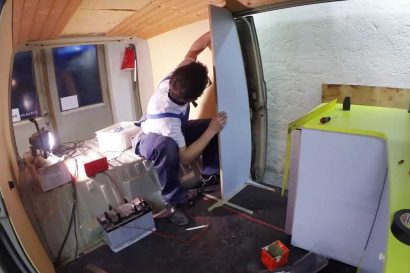 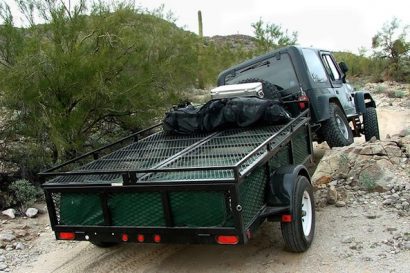 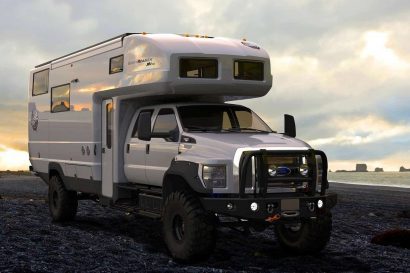 The Cost of Van and Camper Living