We were climbing a rough section of trail on the outskirts of Joshua Tree National Park, our knobby tires bouncing from one skull-sized rock to the next. Most of us had made it to the top of the pass when we heard Palmer, who was riding sweep, begin his ascent. Things were going well at first, with his powerful 1200GS clambering over the loose rocks, but halfway up the rocky wash his metal pannier hooked a piece of granite the size of an end table and the bike suddenly swung round like a rodeo bull. The RPMs spiked, the tires turned sideways, and from inside a cloud of dust and flailing limbs came the clamor of a 500 lb. bike hitting the ground. It was at this exact moment that the trip officially became an adventure.

Early that morning we had set out from Los Angeles under dark, overcast skies. Our group consisted of a small contingent from Aether: founders Jonah and Palmer, Brandt, and myself. We were joined by Davide, founder of Shelter Half, and Sinuhe, long time senior photographer for Overland Journal and outdoorsman at large.

It was the eve of the Winter Solstice, but before we were forced to succumb to the holiday spirit in full, we decided to escape into the desert for one last motorcycle trip to cap off the year. We planned to ride east of Palm Springs, cut north across Joshua Tree, then continue on to the Mojave Preserve before finally spending the night at a secret campsite (courtesy of Sinuhe).

The trip began like every other road trip from Los Angeles: a grueling hump across endless miles of freeway. However, the dullness was broken up by intermittent rain showers, which lifted a layer of oil off the road and caused our tires to shimmy and shake. So in addition to being wet we were also very much awake. Thankfully, the skies cleared as we turned off the highway outside Coachella and we headed north into the sun-drenched mountains.

Where the crumbling pavement of the desert road ended, we continued. Our route now took the form of a double track trail that became less and less defined as we went. About midway through, where the terrain got particularly rough, is where Palmer took his tumble.

Damage to the rider was minimal (a bruised shin), but the bike suffered a dented pannier, broken mirror, and dislodged toggle switch that kept the horn permanently depressed. This issue was immediately remedied with a rock, which was readily offered by Davide. We all lent a hand to help reposition the bike, which was now facing downhill, and enjoyed a few laughs recalling the incident. Then, undaunted and with renewed energy, Palmer jumped back in the saddle and rode the rest of way up. The caravan pressed on.

We made our way out of the mountains and onto the sandy trails of the Joshua Tree basin. Riding a motorcycle over deep sand requires a mixture of skill, faith, and black magic. More than a few of us, myself included, dumped our bikes in spectacular slow motion. Finally, with the sun hanging low on the horizon, we arrived at a paved crossroad. After two hours of plodding through sand, asphalt under the tires never felt so good.

We had a brief fuel stop in the desolate town of Amboy before making a beeline to our campsite inside the Mojave Preserve. The stars were just starting to poke through the purple twilit sky as we pulled our bikes into camp. We set up our tents, got a fire going, and settled down for a well earned dinner. We had been riding for over 10 hours and it felt good to pour a glass of whiskey and take a seat by the fire.

Back in Los Angeles people were dashing about in feverish preparation for Christmas: hanging up lights, braving crowded shopping malls, and entertaining relatives. We would have to return to that madness soon enough, but this evening we could kick back, have a laugh, relax, and start planning our next adventure. 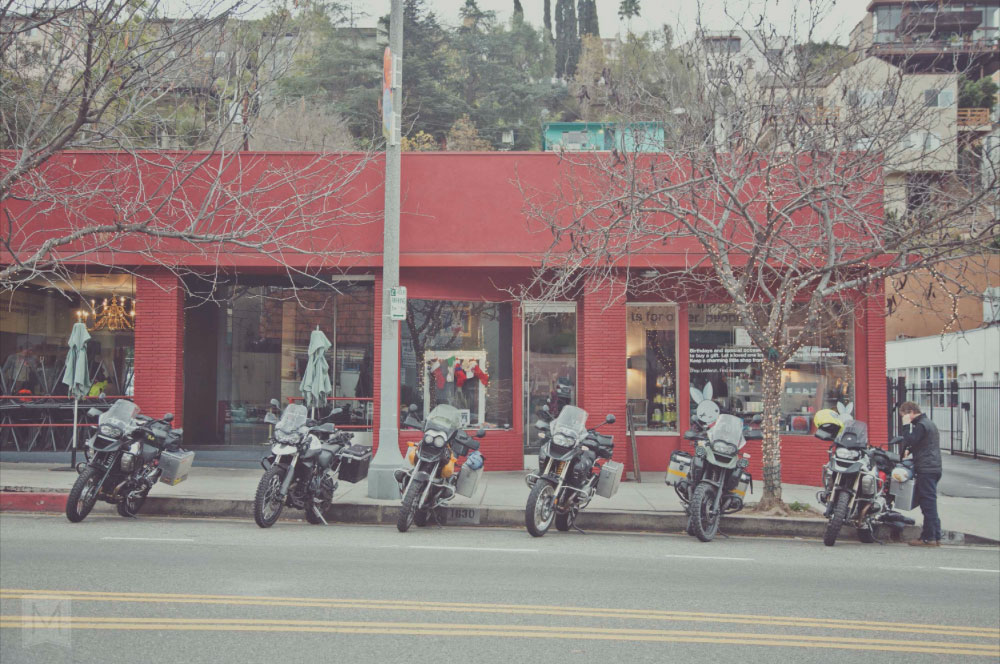 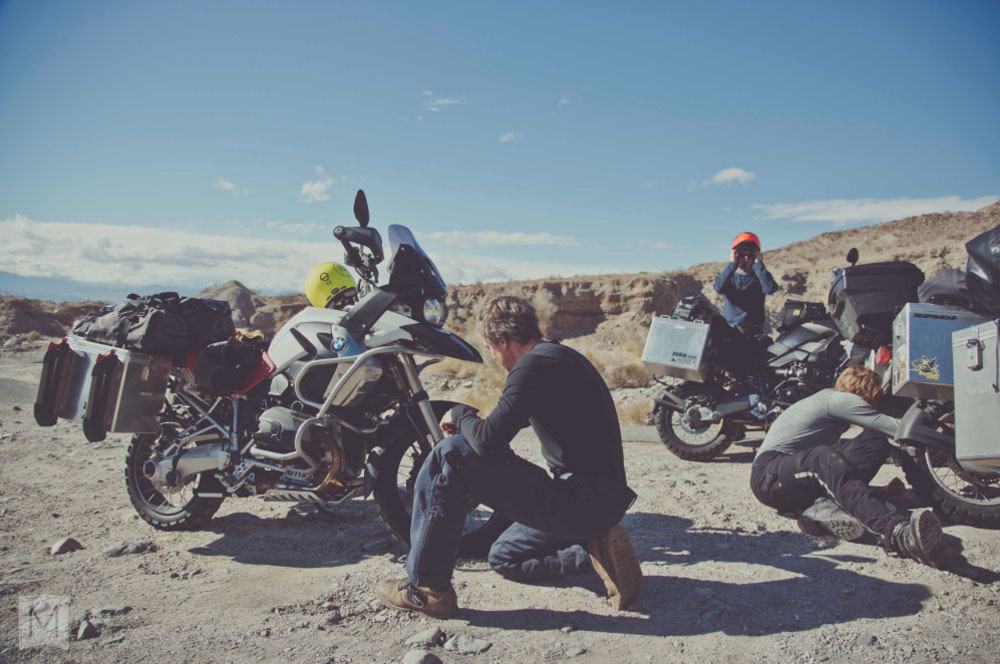 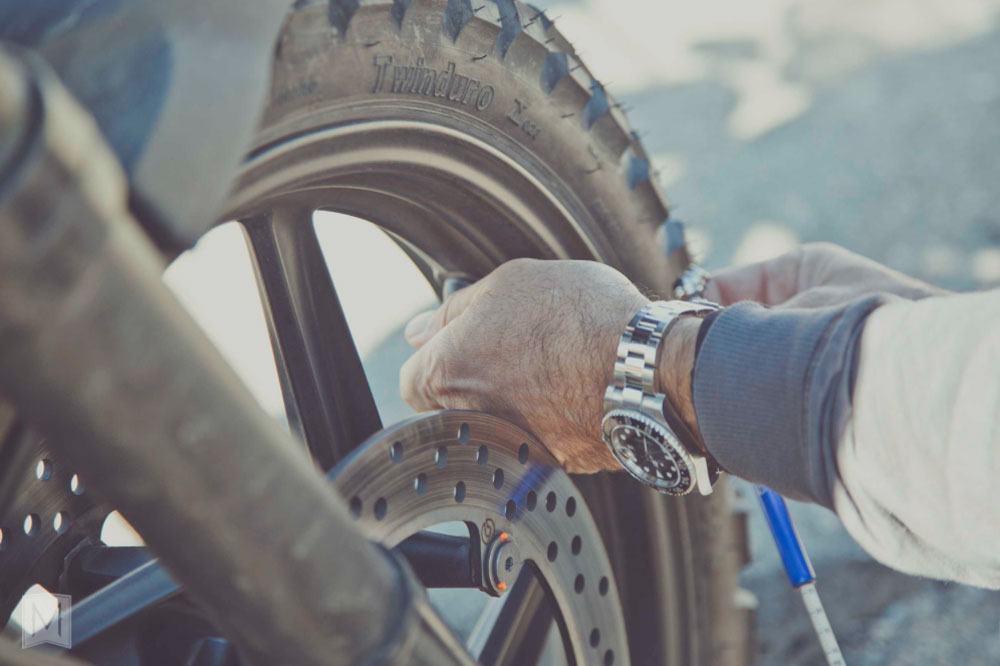 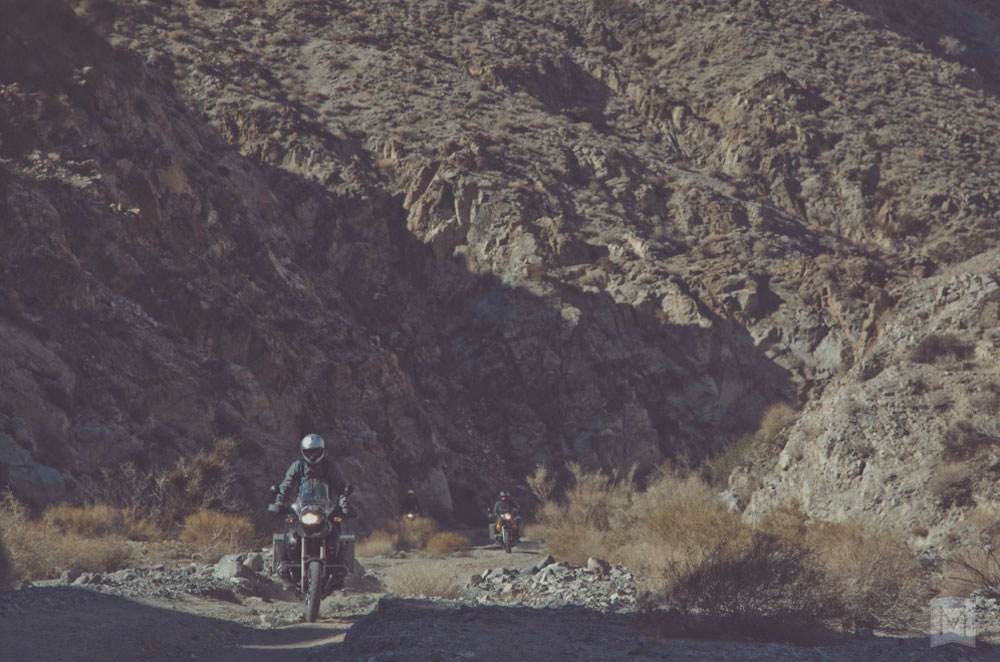 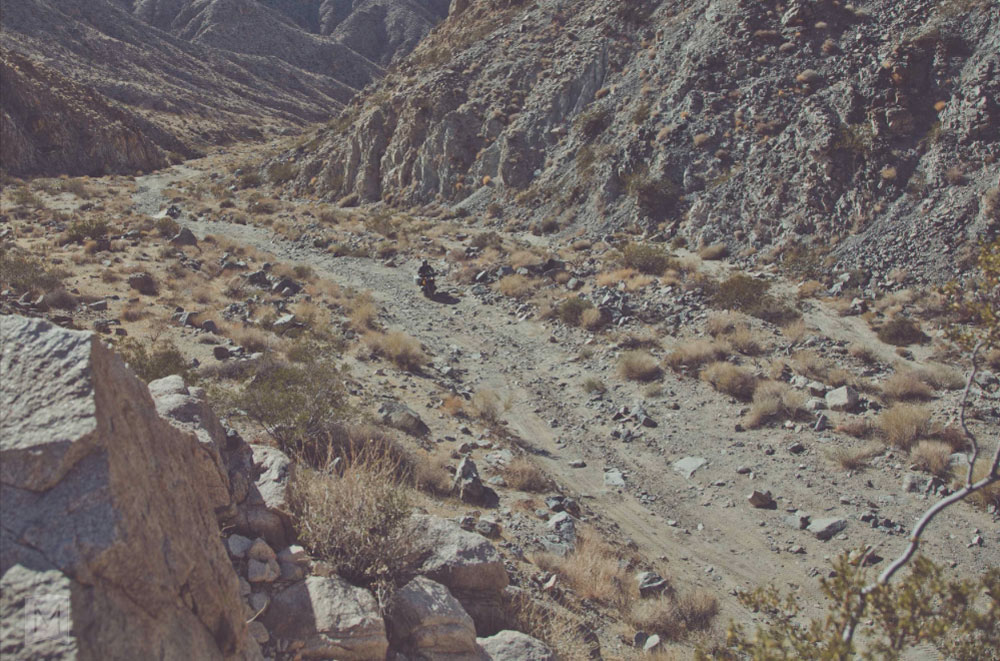 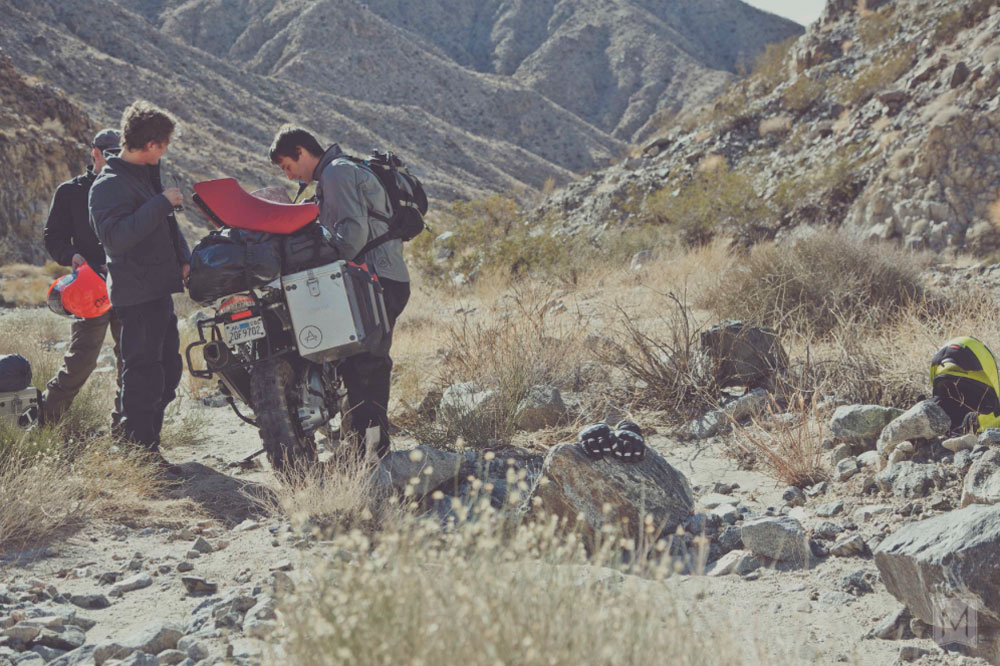 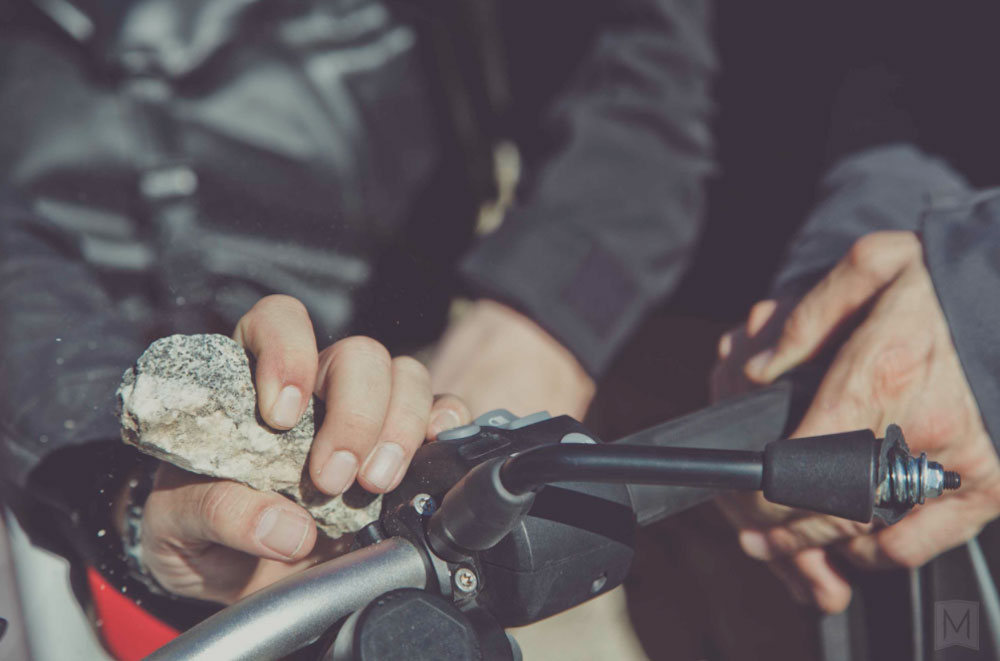 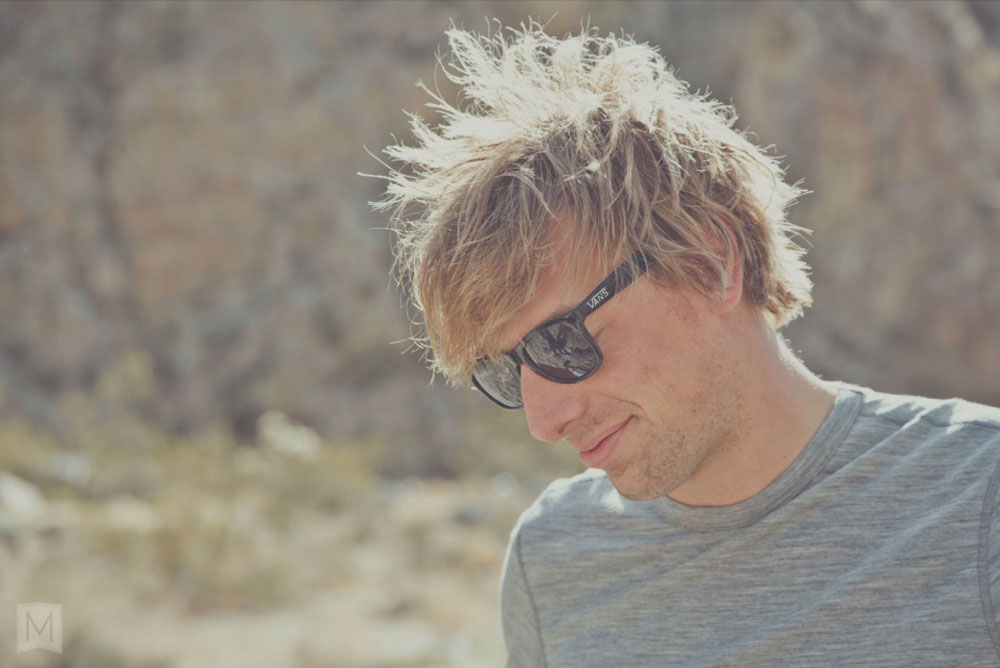 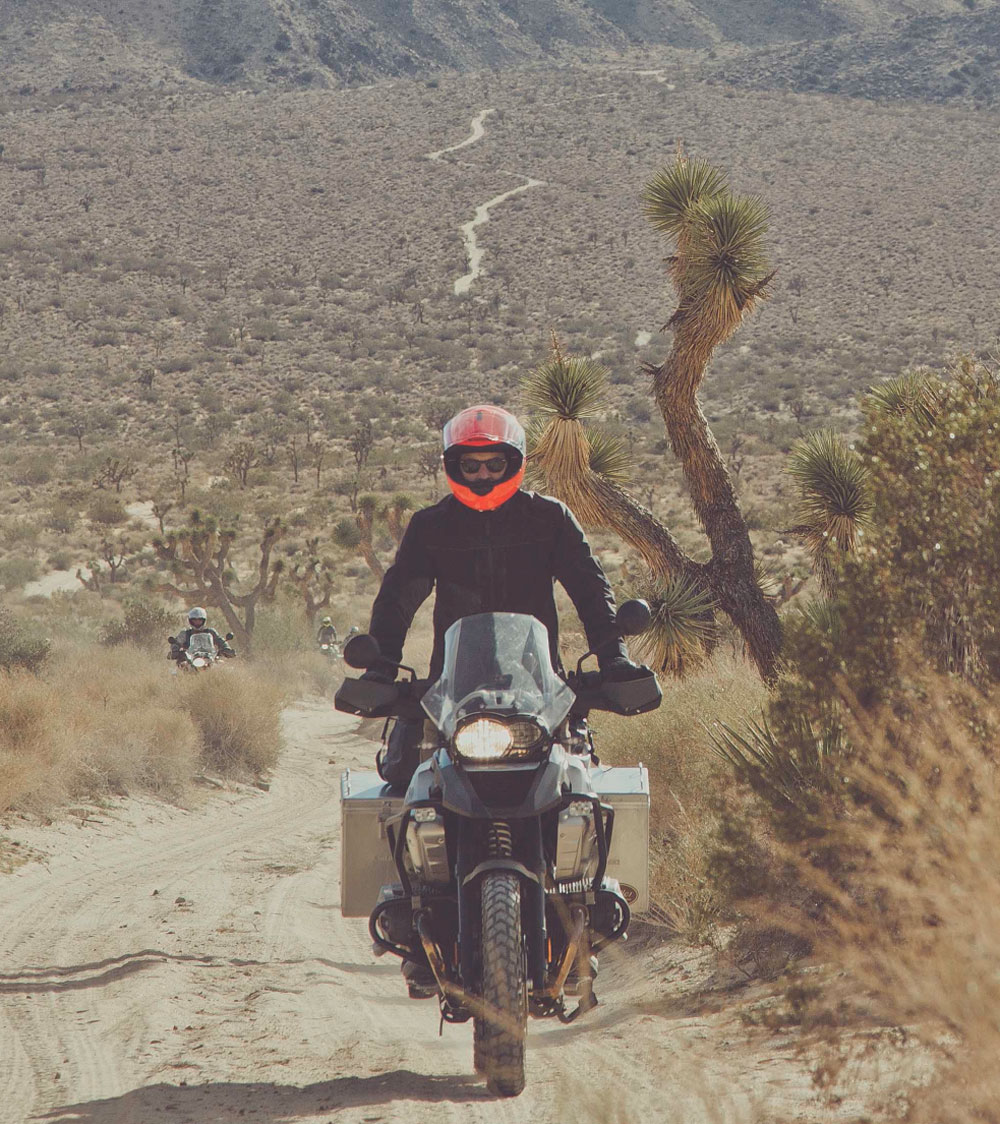 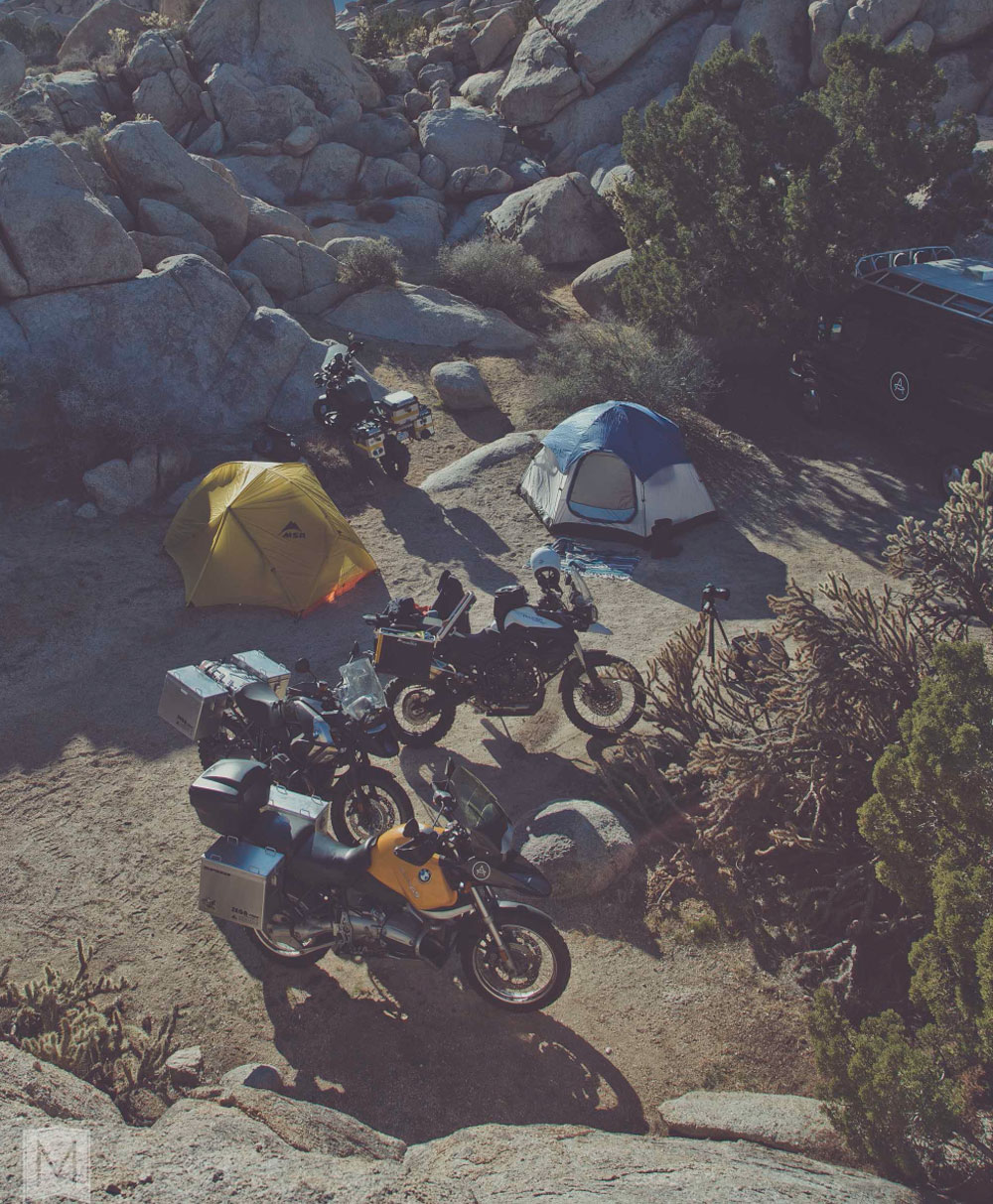 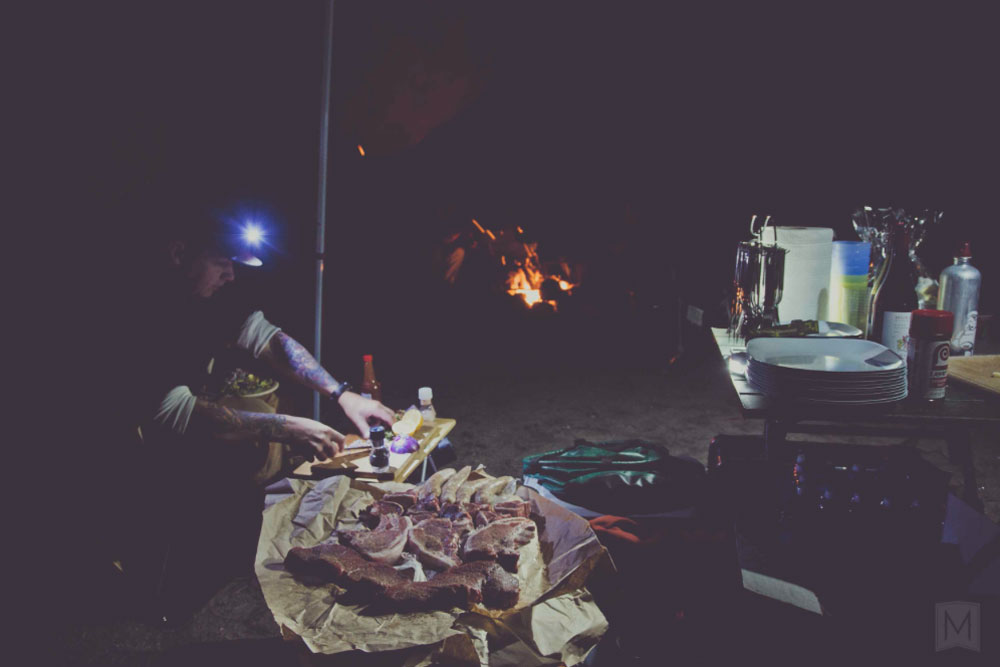 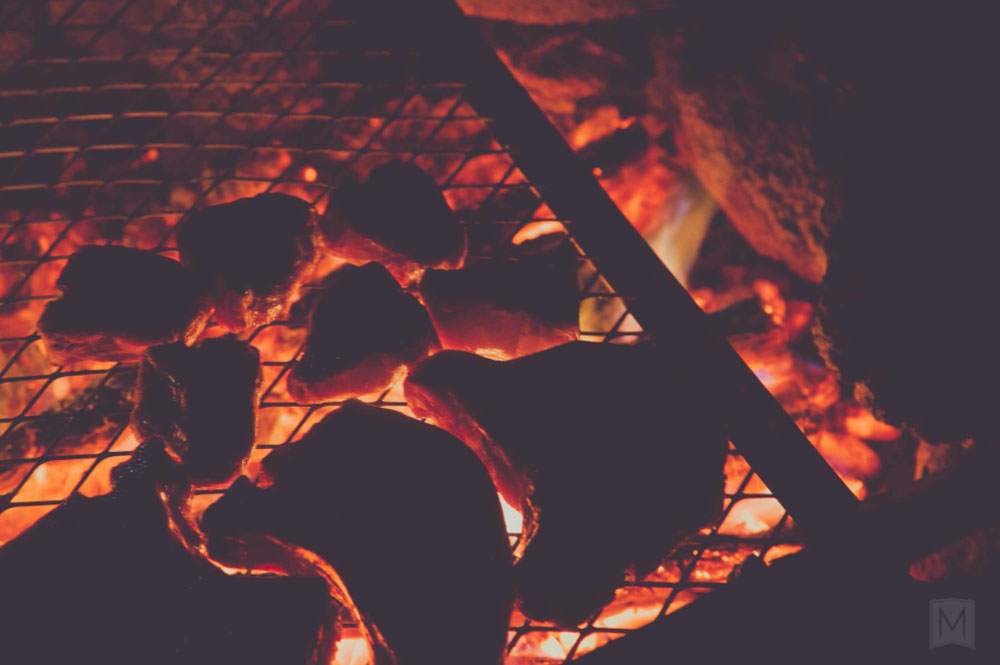 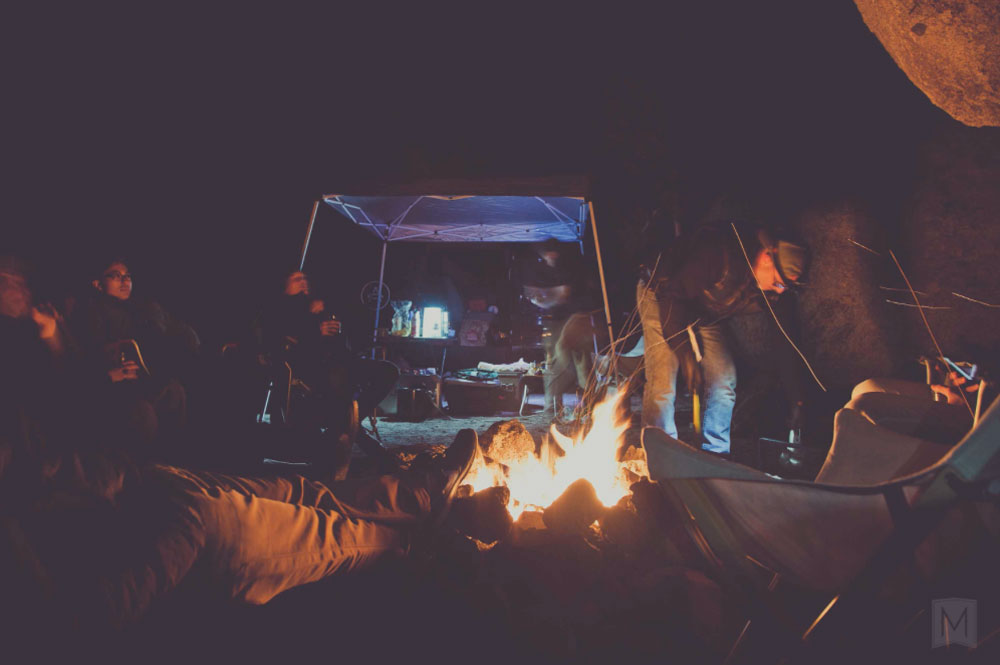 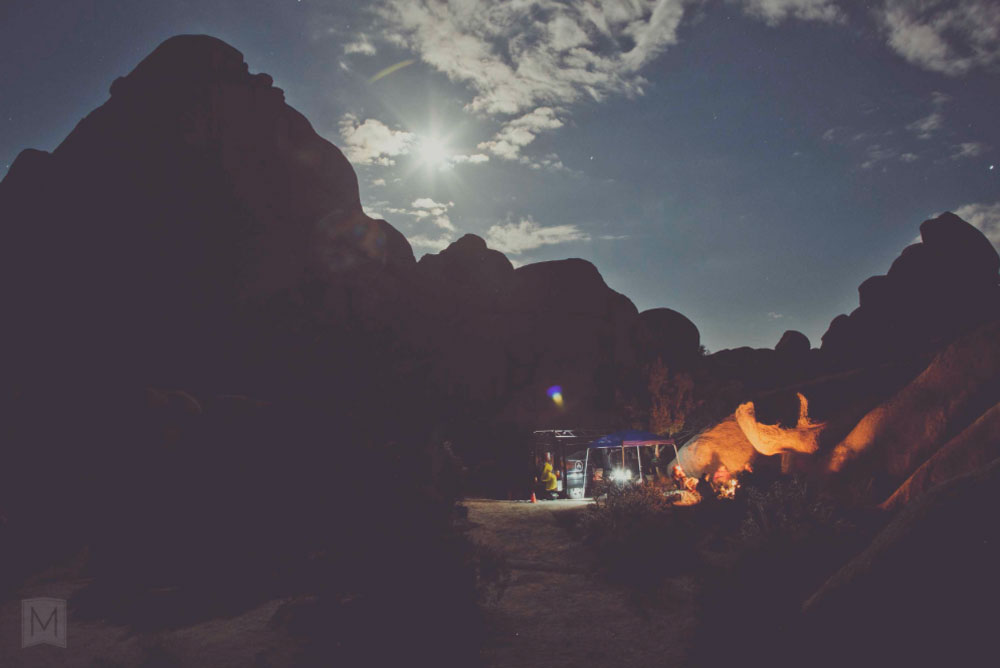 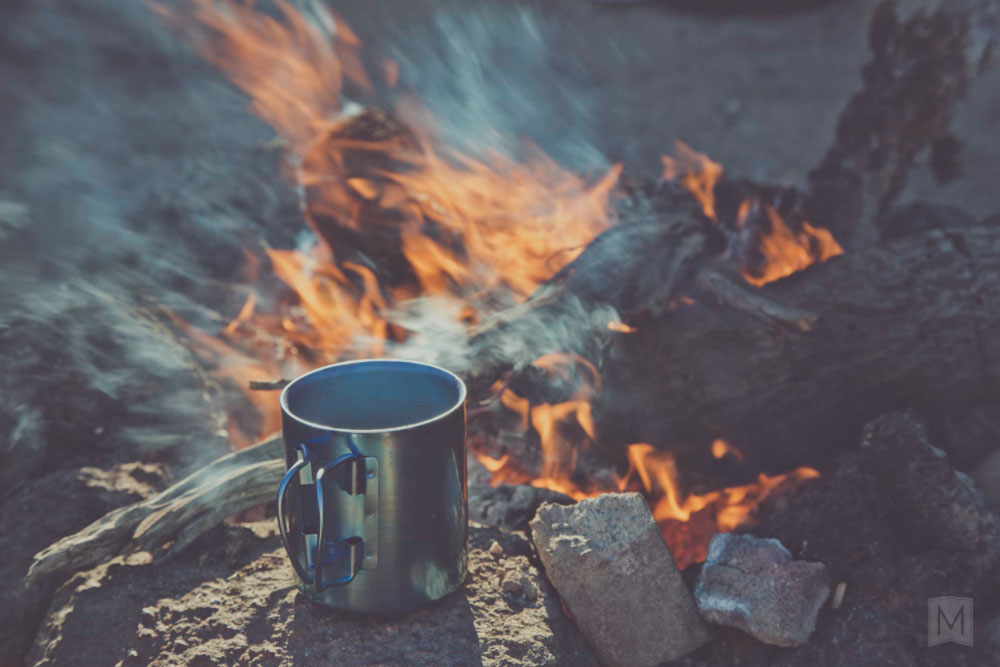 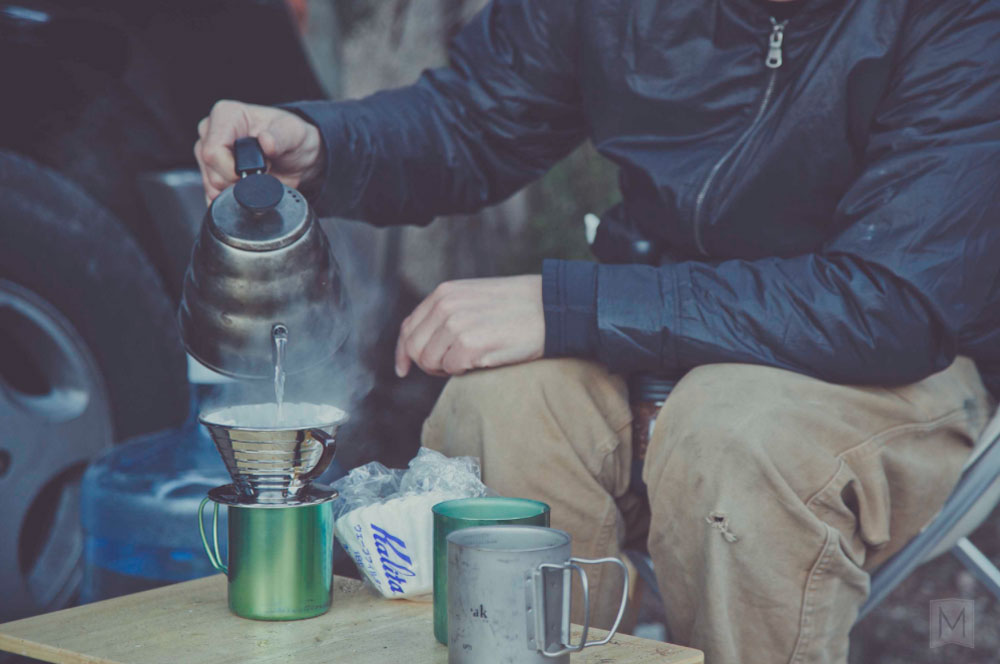 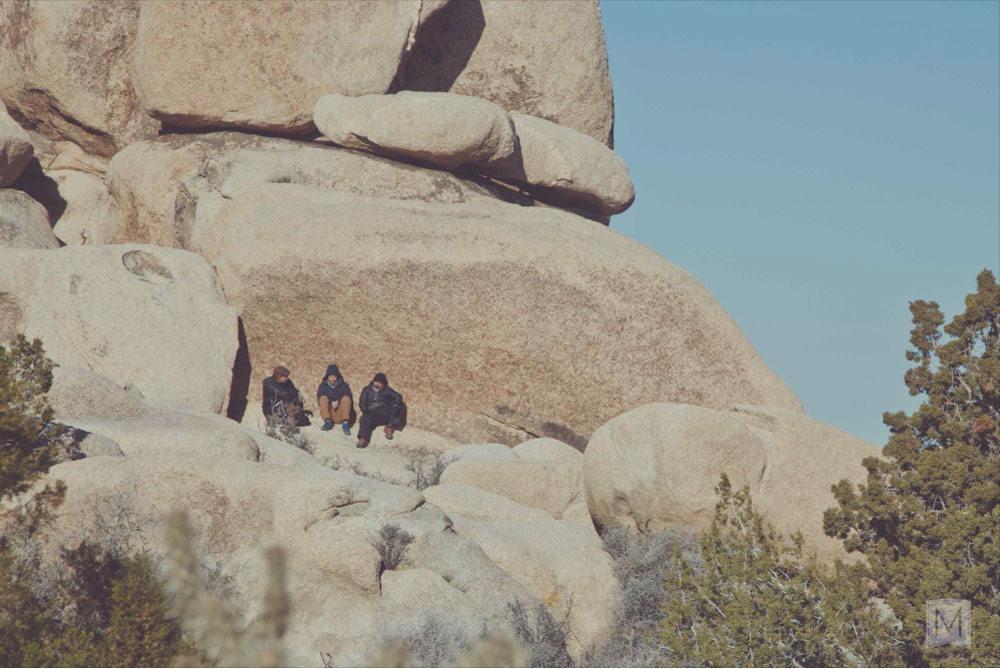 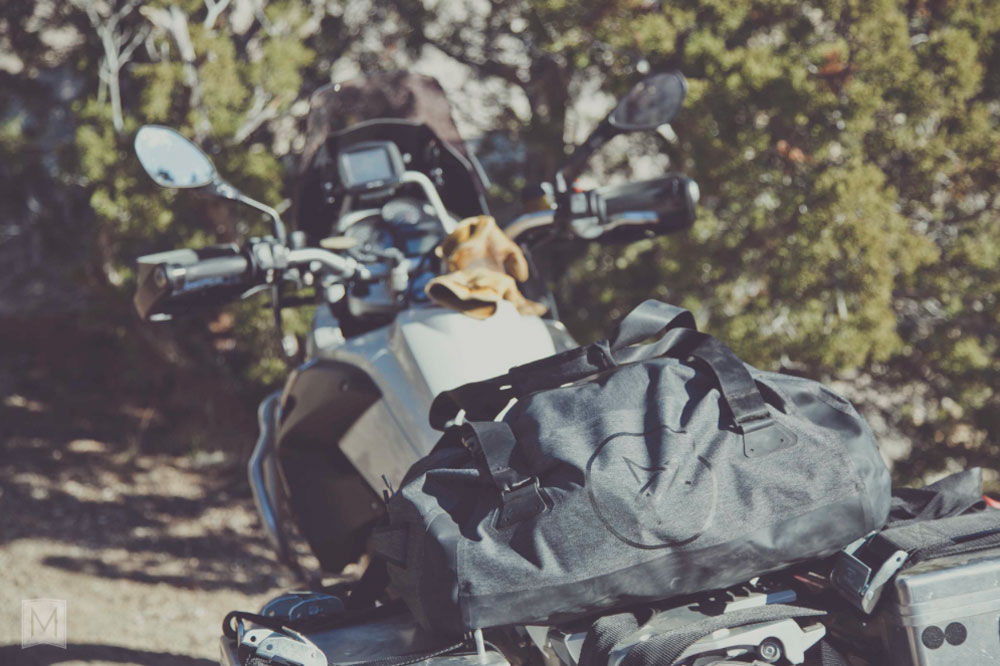 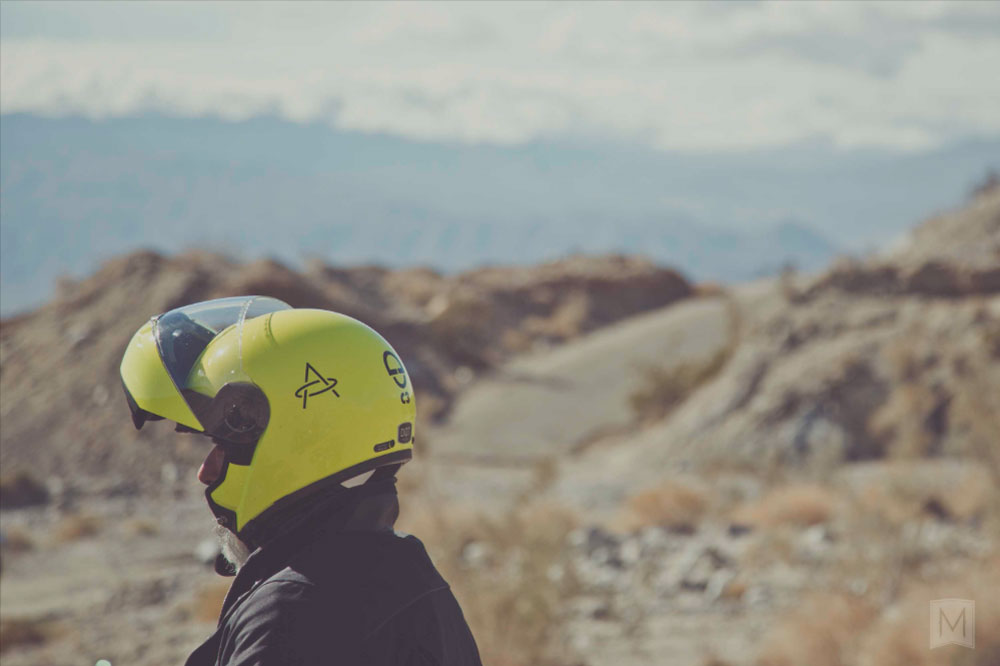 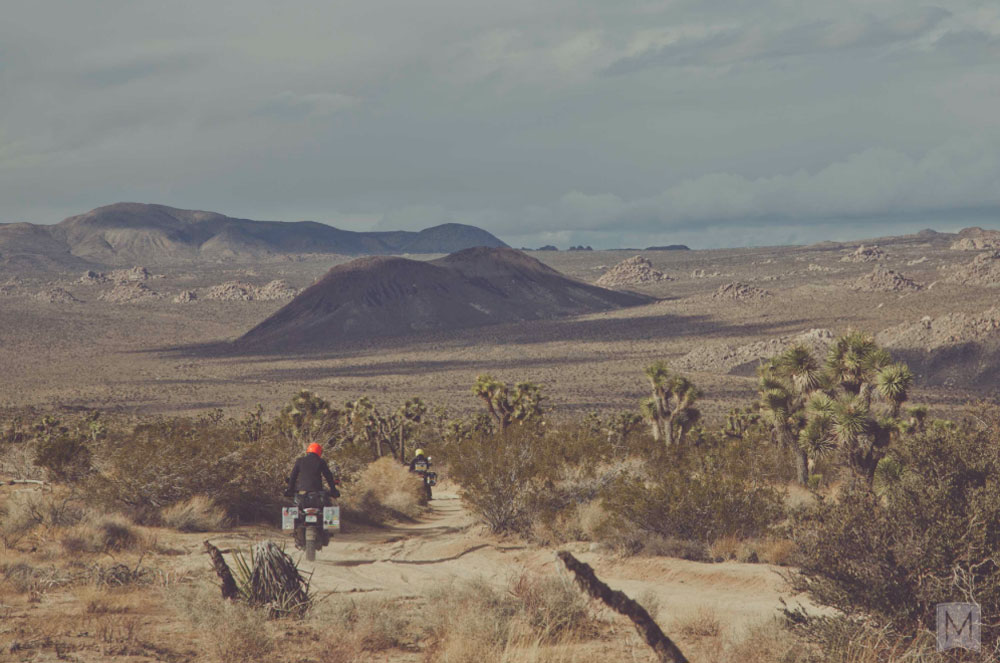