I have long since been fascinated with traveling in Latin America. Many will attribute it to the year I spent living in Argentina at the age of 18; but in reality it goes much further back than that – trips to the beaches near Puerto Peñasco in Sonora, Mexico beginning around the age of 8. One summer in the mid-1980s I accompanied my paternal grandparents on a multi-day trip to camp on the beaches just west of Puerto Peñasco. I had been to the beaches of Southern California many times before, so I was used to the ocean. But being in a place where everyone spoke a different language – that was new to me! At that young age, I felt safe being with my grandparents, but was a little uneasy at not knowing what everyone else around us was saying. Fast-forward to 10 years later, after four years of studying Spanish in school, several more trips to Mexico, a year of full immersion as an exchange student in Argentina – I now possessed the courage to head out into these foreign lands on my own.

Before graduating from college, I decided to study abroad again, this time in Guadalajara. When the session was complete I bussed all over southeastern Mexico for a few weeks. Were I to do those studies again now, I would definitely make the drive down from Arizona to Jalisco in my own vehicle (although traveling all over southern Mexico solely on public transportation was quite an adventure). Then two years ago, one of my first field assignments after going to work for Expeditions West was to scout some trails and campsites in Baja Norte… solo. I only had a few days to prepare for the journey and had a few apprehensions, but dove right into it. Last year I was on an Overland Training alumni trip, again in Baja Norte. I chose to do the entire adventure on my Suzuki DR200 dual-sport motorcycle. As a result tackling the rugged road to the Santa María mission near Cataviña, I smoked the clutch on that little bike. After attempting a field-repair with Andrew Moore, I decided to leave the moto with the family at a nearby rancho, catch a ride back to Arizona in Andrew’s 70-Series Land Cruiser, and then return to Baja with my Toyota Tacoma to retrieve the broken-down bike. I had originally wanted to do that trip solo, but am glad I decided to go along with the Overland Training group, since I was riding a wholly-inadequate motorcycle for the journey. So when I was brainstorming on what to do with my vacation time at the end of 2010, I thought it would be fun to do a solo trip and retrace some of the same route from the previous year, but to also explore even further south.

With the location decided, the time off secured (2 weeks), I needed to figure out what motorized platform I would use for the adventure. Since learning how to ride a motorcycle two years prior, I was totally addicted to that form of travel. I really enjoyed being able to experience everything along the way: every scent, sound, and change of temperature. But I also really enjoyed the comfort and reliability of traveling in my truck, in addition the companionship of having my dog along. Though I never imagined taking him to a foreign country. Immediately a thought popped into my mind of rabid street dogs, emerging like a mob of zombies, with their only desire to infect my healthy canine. There was no way I wanted to risk that scenario upon Carter. Sure I had read stories of people traveling with dogs (even one story in the publication I work for), but I had been to Mexico before; I knew how many scroungy stray dogs there were! I couldn’t stomach the thought of leaving him with family or friends while I had the time of my life camping on the beaches of Baja California Sur. So it was decided: Carter and I would pile into the Tacoma and head south.

I had already renewed my passport earlier in the year, so I was set. Since dogs don’t have passports, I researched what he would need to cross into Mexico; and more importantly, what he would need to get back into the U.S. without being quarantined. It looked like all he would need is a current rabies vaccination certificate, along with a certificate of good health from a veterinarian dated no less than 10 days before leaving the U.S. With those details secured, I just had a few last-minute mods to finish up on the Tacoma: wire up the PIAA auxiliary driving lights, connect a battery monitor, and install a Blue Sea fuse block for all of my accessories (fridge, radio & inverter).

Stay tuned for a travelog of each day of the adventure…. 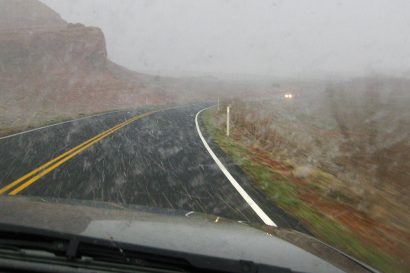 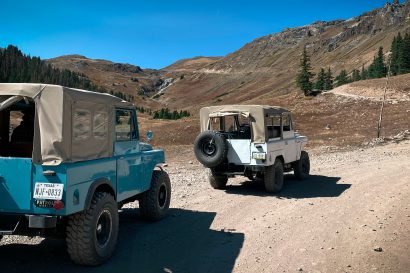