After 20-odd years of journeying together, Jase and I hit a curious crossroads. Our former lives of dive-guiding, motorcycling, and 4WD overlanding continued to amass in a Russian doll. Until, that is, we consciously decided to press pause on seeking stimulus from the physical world, turning inwards to pursue a different kind of journey to our inner sacred space. Little did we know what lay in store at the ashram in southern India—our consecrated home for the coming months. At last, we arrived. It had taken 24 hours for me to get there, or 41 years, depending on how you looked at it.

Sadhguru (SG) is one of India’s most influential persons, an enlightened yogi master, mystic, visionary, and world-thought leader who recently spearheaded the Save Soil campaign reaching 3.9 billion people. Unfailingly, the day’s schedule started with a drum-beating wake-up call at 4:30 a.m, followed by guided yogasanas and seva (volunteering), followed by evening meditation. There was scarcely the time to hand-wash your clothing and body, fuel up on two vegetarian meals, and fall in an exhausted heap by 9:30 p.m.

The rigour of a seven-day compulsory schedule stems from it being one’s choice to work on personal growth; why would I need time off from that? SG asserts that no spiritual process will happen to any human unless they become willing. Thus, volunteering acts as a valuable vehicle for creating that willingness. Using the ashram’s atmosphere to become willing means extending that into your life, eventually pervading your being to become willingness. 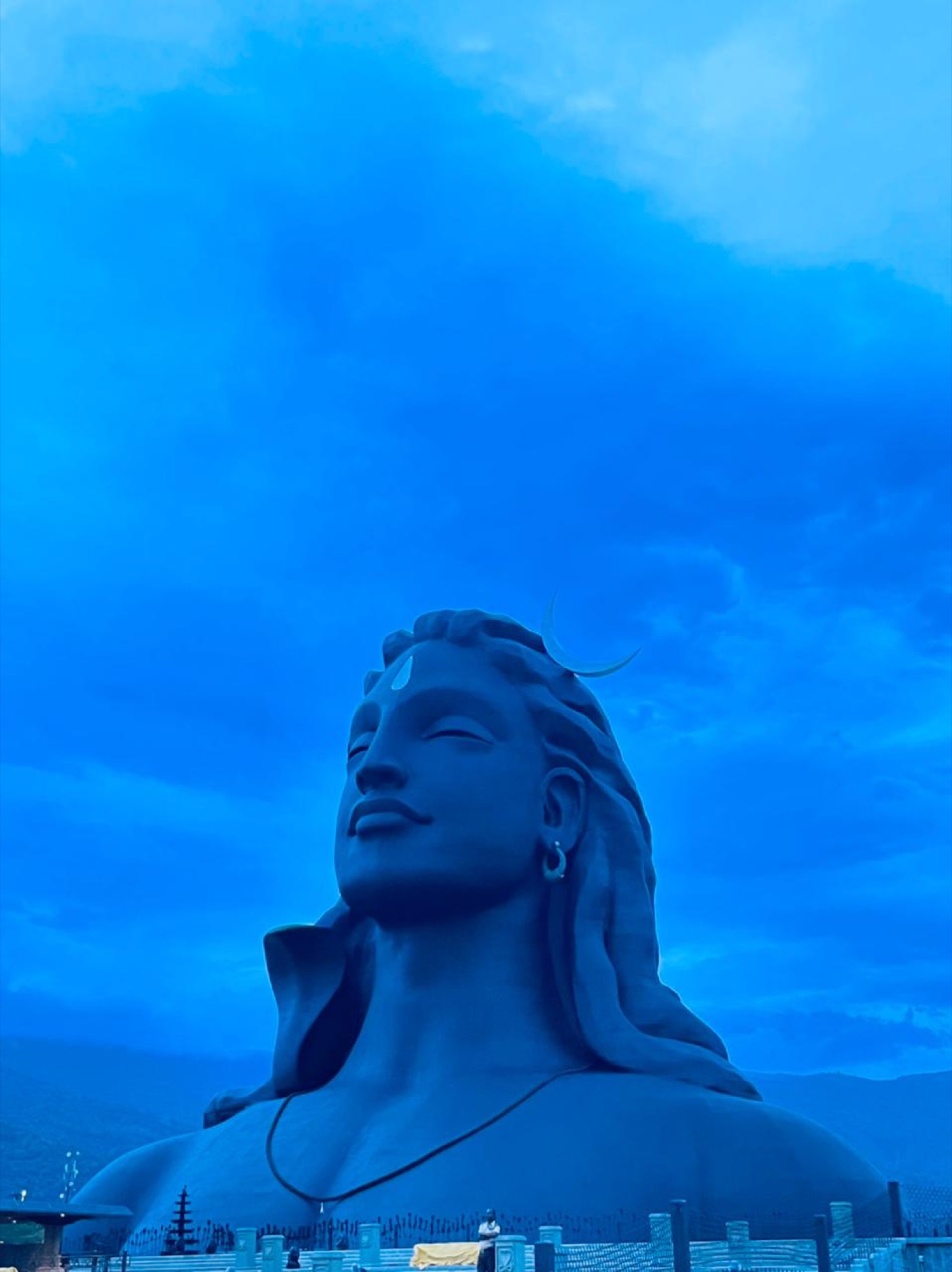 The ashram spanned a 13-acre site at the base of the mist-shrouded Velliangiri Hills, a part of the Nilgiri Biosphere Reserve in Tamil Nadu. The location reinforced how little divided us from a tropical wilderness where leopards, tigers, and elephants roamed. The premises had simplicity without detached functionality. The aesthetic was pleasing, revealing artful detail in the carefully positioned stone, wood, and indigenous flora. Nothing manicured, nothing untamed. Many indoor spaces were incredibly atmospheric. Beautiful mural-adorned ceilings, hand-painted with natural dyes, created an understated, dignified grandeur.

Recognised as the world’s largest bust sculpture by Guinness World Records, Adiyogi is easy to locate on the ashram’s premises at 112 feet high. It represents the 112 ways to attain one’s Ultimate nature from this living entity. Over 15,000 years ago, Adiyogi (Shiva) was the first yogi to walk Earth and transmit the yogic science to his seven disciples, the Saptarishis. His message was this: “In is the only way out” for human liberation. Quite the statement.

Speaking of living entities, “It’s a cocktail of pure awareness and madness,” summarised SG. Metaphysically, the Dhyanalinga is a Guru. Measuring over 13 feet, it’s the world’s largest mercury-based linga (a consecrated energy form). A dome built mostly from brick, mud, and herbs cocooned the warm and soothing space of the temple’s womb-like sanctum. Before me towered an imposing granite column, at the base of which sprung a coiled serpent. Around it lay a water border on which flowers floated tranquilly. 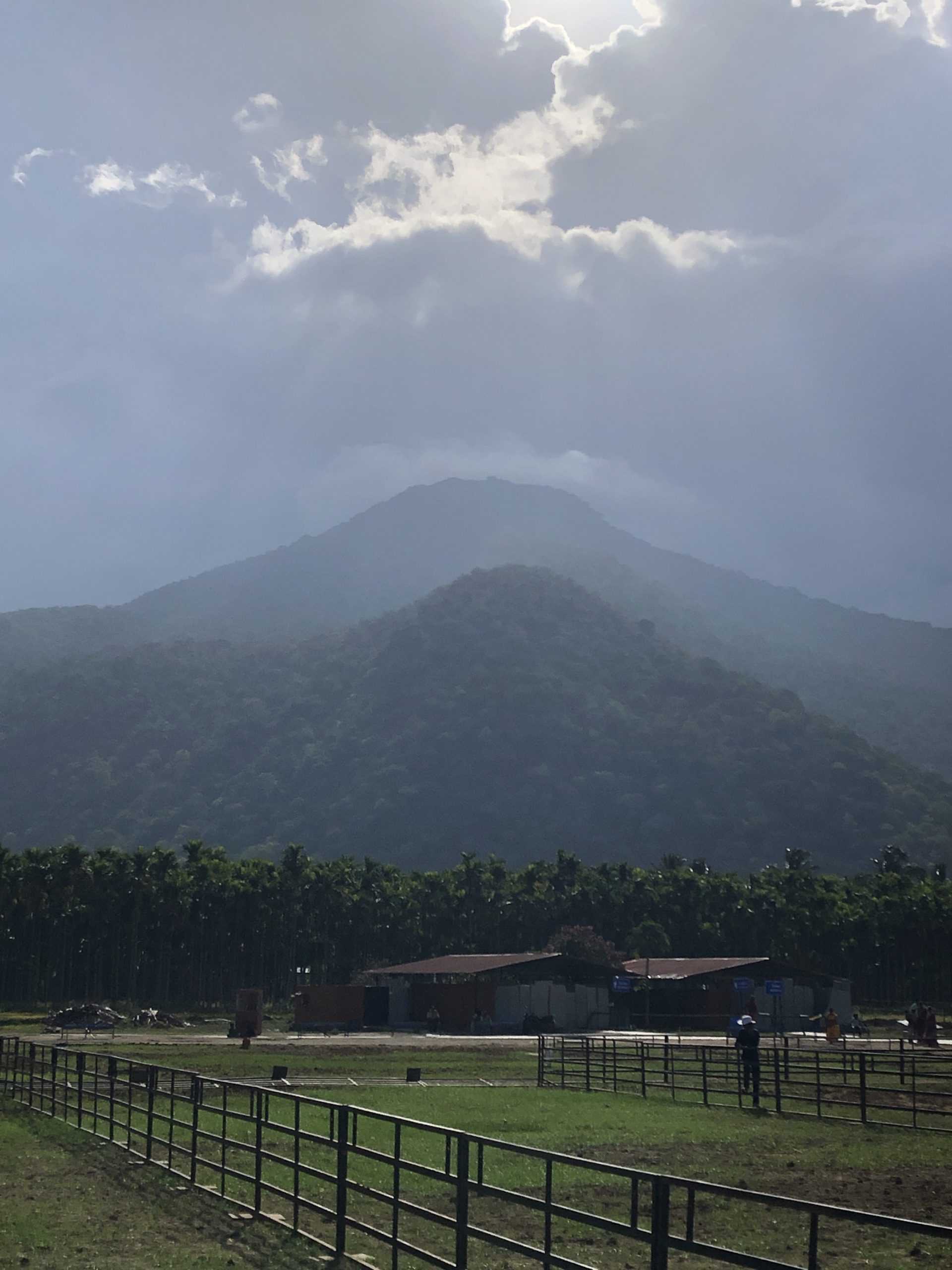 Silently, I made my way into one of the dark alcoves to experience the Dhyanalinga. For some, it’s a living, pulsating presence—nothing shy of a miracle. For others, it clarifies. Unknowingly, I emerged with a charged energy in my being. It was only when I tried to sleep that night that I failed. Skeptical, I visited numerous times, and the same upsurge transpired. Others simply welcome a snooze near the stone edifice. There’s no right or wrong; it is what it is for each individual. If nothing else, it’s peaceful.

According to SG, peace is the building block of life, not the thing towards which we should strive. It’s every human’s birthright. It paves the way to leading an inclusive life – seeing the world as part of oneself rather than separately. Joy is part and parcel of it, too. On the journey of deepening involvement, one’s life should become an expression of joy rather than a pursuit of it. Namely, the source of your happiness is already inside you. This strikes a particularly poignant chord as to why we travel. We’re beginning to understand that seeking pleasure from the world externally won’t sustain our long-term happiness. It will trigger short-lived elation for sure. However, facilitating moments that trigger the happiness which already resides within gives us an aspiring reason to sink into one splendid corner and then another.

Admittedly, the tight, repetitive schedule, the devotional requirement, and the Indian culture were a lot to drink in. Tied to the ashram premises on our visa, walls eventually began to close in after nigh three months. Still, I embarked on a spiritual experience outside the physical realm while making inroads toward a firmware upgrade Lisa 2.0. Specifically, I unlearned the essence of who I was, dissolving some of my strong likes, dislikes, psychological baggage, and compulsive behaviours. 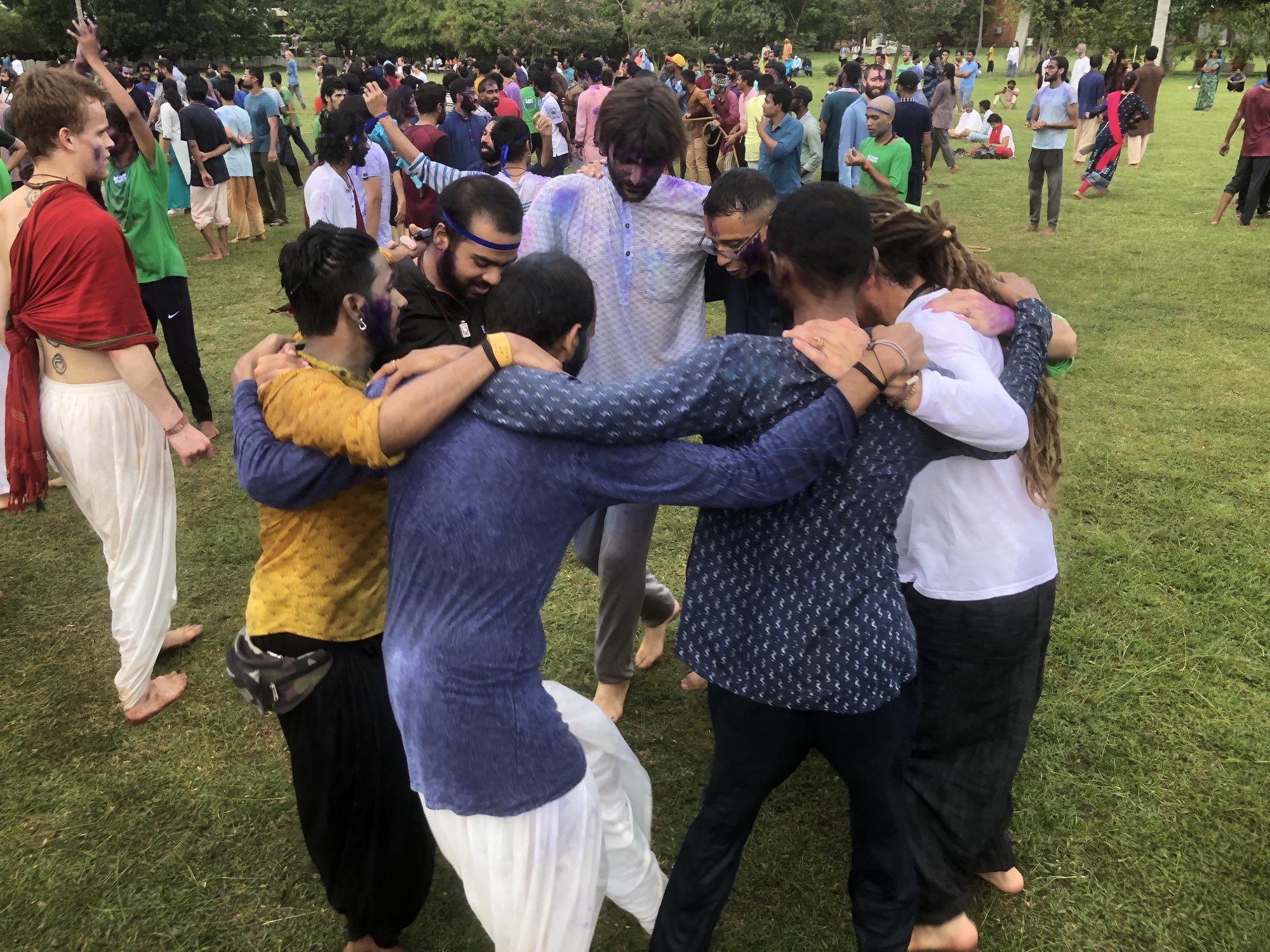 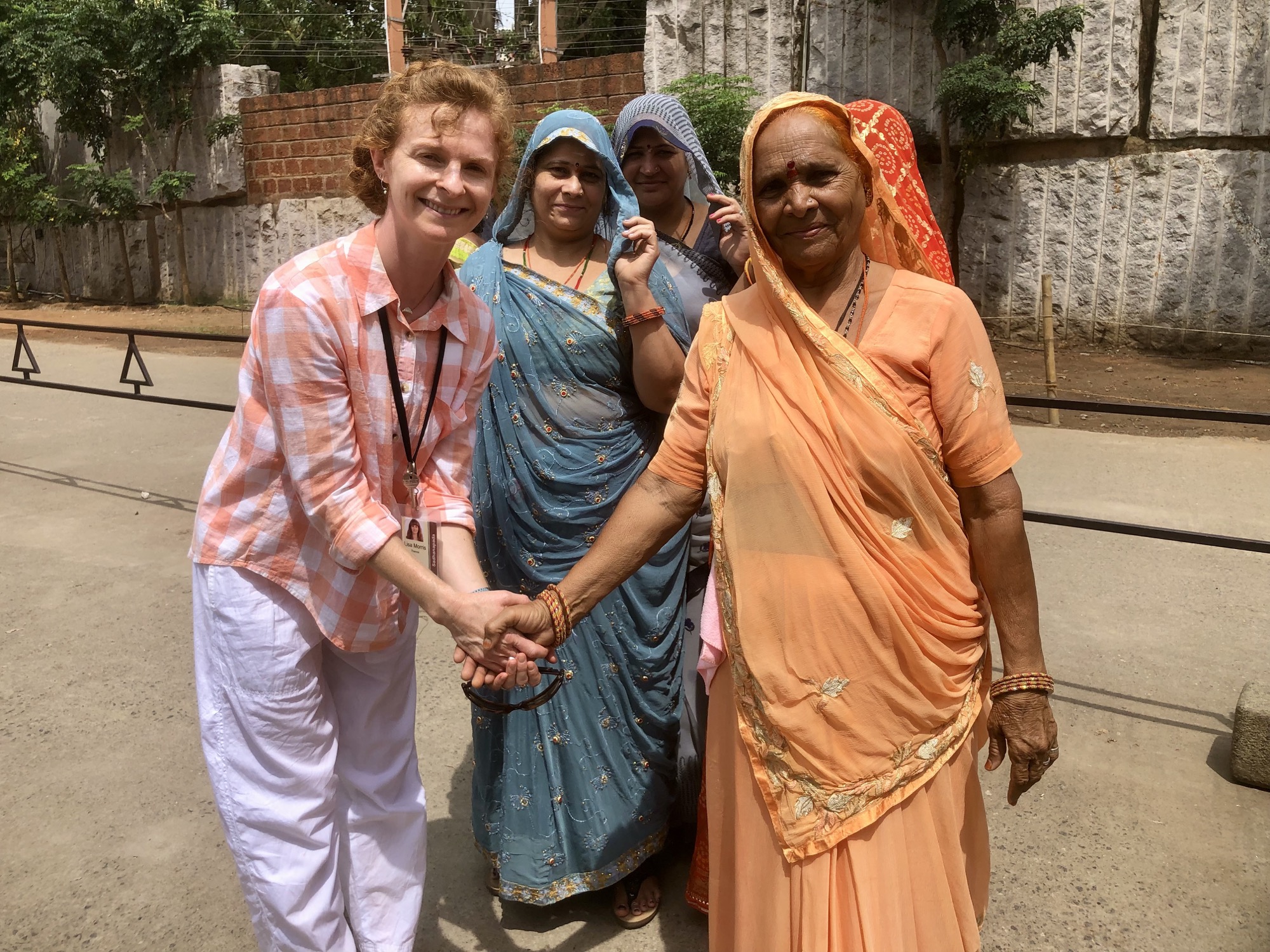 Moreover, India has made me wholeheartedly appreciate life on the road, to want what I’ve got. Having imbibed what I came for, even after 78 days, I felt a sparkling liveliness, a heightened energy with which to engage my life. Single-pointed and tethered without a sense of lack. And so, for all my unanswered questions, SG delivered the goods: providing the inner engineering for one’s well-being. While participating in my outward journey, the possibilities of my inner one have become too great to disregard.

Leaving India for Nepal, we set off one day on a Himalayan through-trek near the Chinese border. Nearing the trailhead, Jason spotted someone familiar driving a jeep, a 4WD entourage in close pursuit. Excitement fizzing in my chest, I heard the word “ashram” from whence we came. Gobsmacked to lay eyes on and then be fist-pumped by Sadhguru, it was a blessed encounter that could have toppled me over with a feather. I just about managed to remove my sunglasses, bow my head deferentially and close my palms, mouthing Namaskaram. 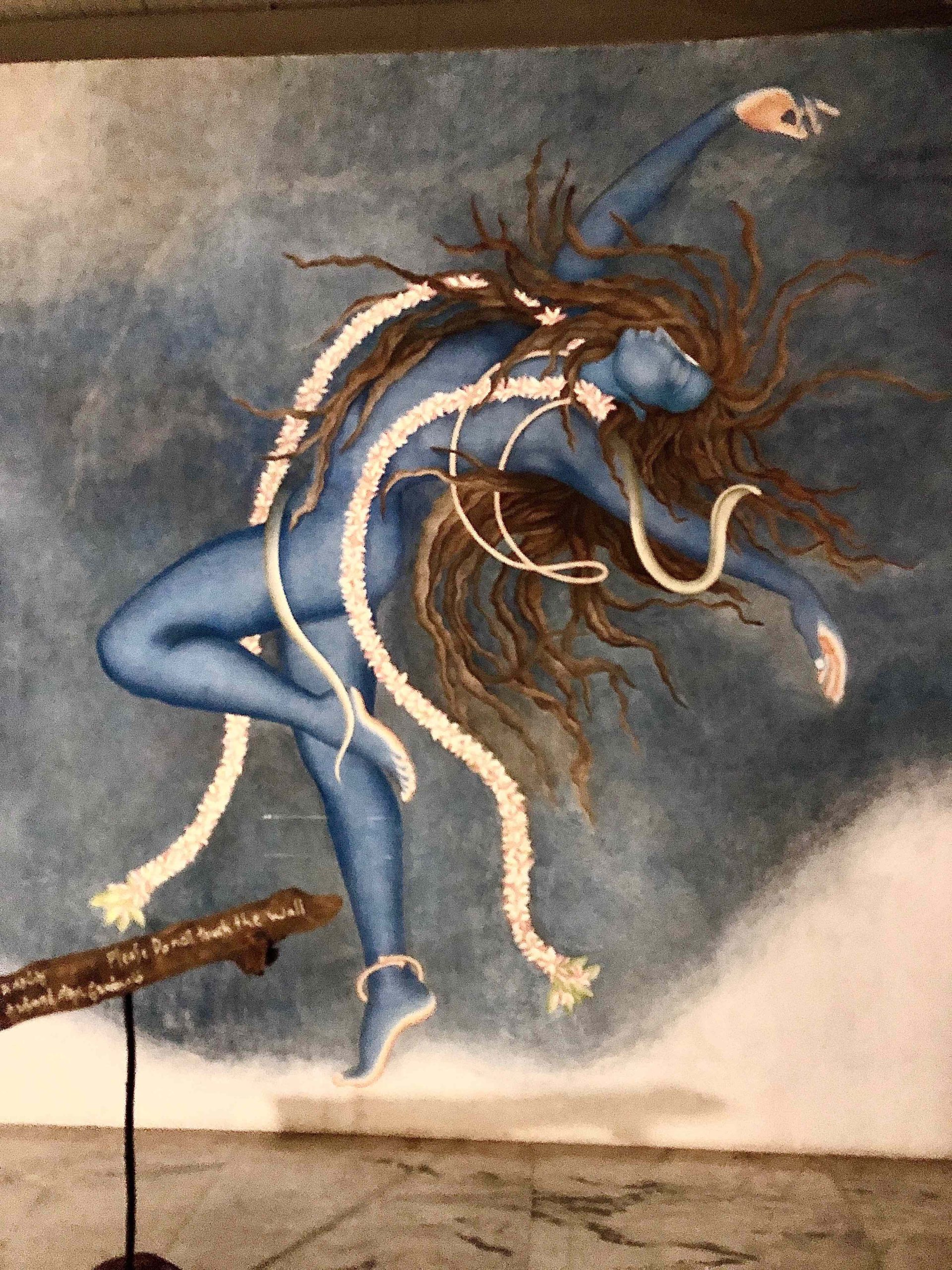 Not ever having hoofed it for 100 miles over 10 days, we rose to Nepal’s magnificent challenge above 14,000 feet. I was utterly bowled over by the Himalayan landscapes, so vast that I forgot all sense of self by the infinite. Indeed, when you know you’re nothing, you become immense, as SG nailed it. Right now, we’re toying with somewhere well below sub-zero this Christmas in White Rhino, our Toyota Hilux. There’s a lot to see and do. While India taught me internal exploration and anchorage, all I know is that while I’m excited by my path, it means I’m on the right one.