This 36-Hours of Adventure is Presented by: 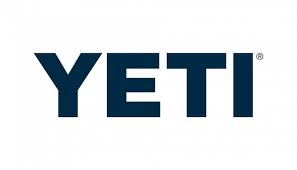 I remember the first fish I caught, my grandfather smiling as I pulled the heavy (to my six-year-old frame) trout out of the pond. I am not sure how many fish my sister caught, but it was likely several more than me, my reputation as a dubious angler beginning at a young age.

Around the same age, I remember my mom screeching at the sight of the same grandfather feeding me sardines in the kitchen. He did like sardines—but I think he might have enjoyed disturbing my mother even more. I still remember how giant my grandfather seemed to me, a confident LA City Fire Captain, recently retired after surviving a head-on collision with a sedan. And he wasn’t in a car either, but standing with his hands outstretched, waving to prevent the car from running into a group of his firefighters behind him. The bystanders said he never moved, protecting his men, but it nearly cost him his life.

Fortunately, my “Pop’o” survived that accident and began teaching me to fish like he taught my father. The Brady’s have always been outdoorsman, hunting, fishing, and camping their weekends away. Each year, from the time my dad was six months old in 1948, they would drive their trucks to Mammoth and go fishing. The three families of firefighters would descend into the Devil’s Postpile for camping at Red’s Meadows, fishing, and general mischief. Most of the firefighters had sons, and they all became fast friends. With time, those annual trips faded away, until the year 2000. 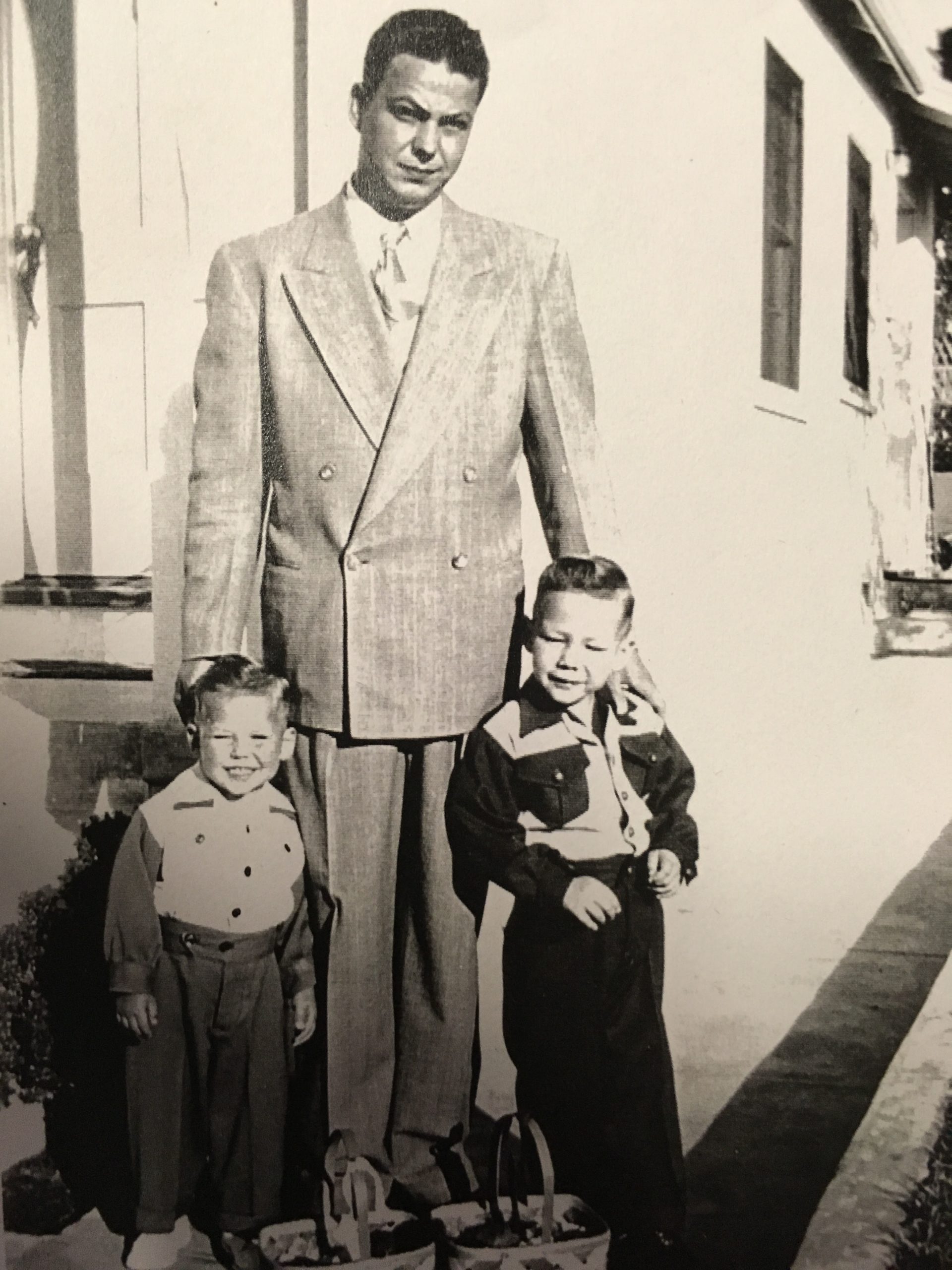 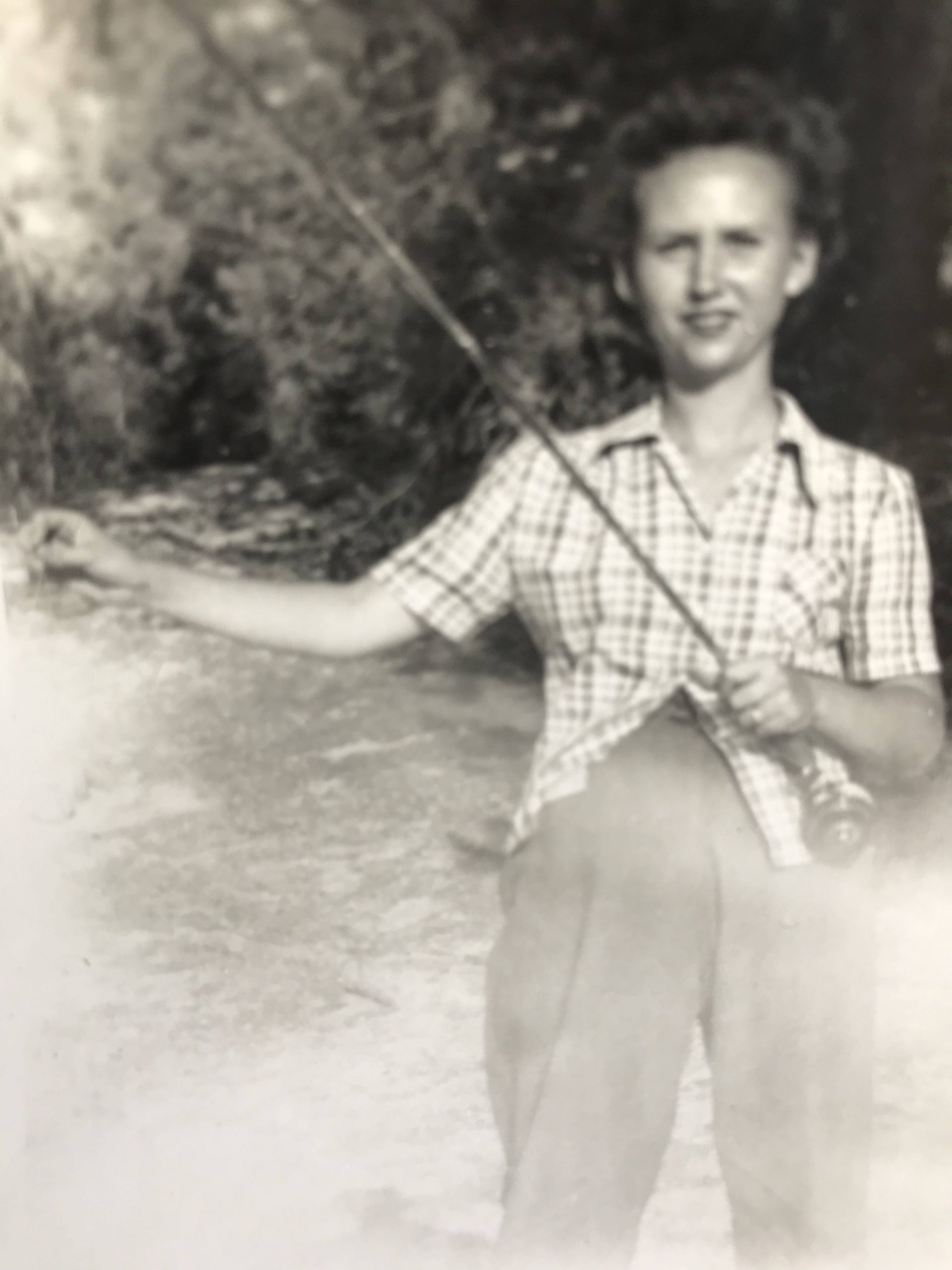 My Grandpa “Pop’o” Brady, with my dad on the left, and his older brother Dave on the right. My Grandmother was equally impressive in the field, displaying her most recent catch (right).

My grandfather passed away the prior year, which brought many of those firefighters back together under one roof for the funeral, their sons and grandsons in tow. Nic and Tony, the oldest of the boys, rounded everyone up and said quite convincingly, “We all need to start going back to Mammoth. Let’s go catch some fish.” They went fishing every year in the intervening decades, and I missed more of those opportunities than I should have. With time, the remaining firefighter fathers passed away, and new generations were born into the tradition. For 2020, my dad and I loaded up a diesel Gladiator and headed west from Prescott, Arizona, to catch some fish in Mammoth, during one of the most extreme fire seasons in recent memory. 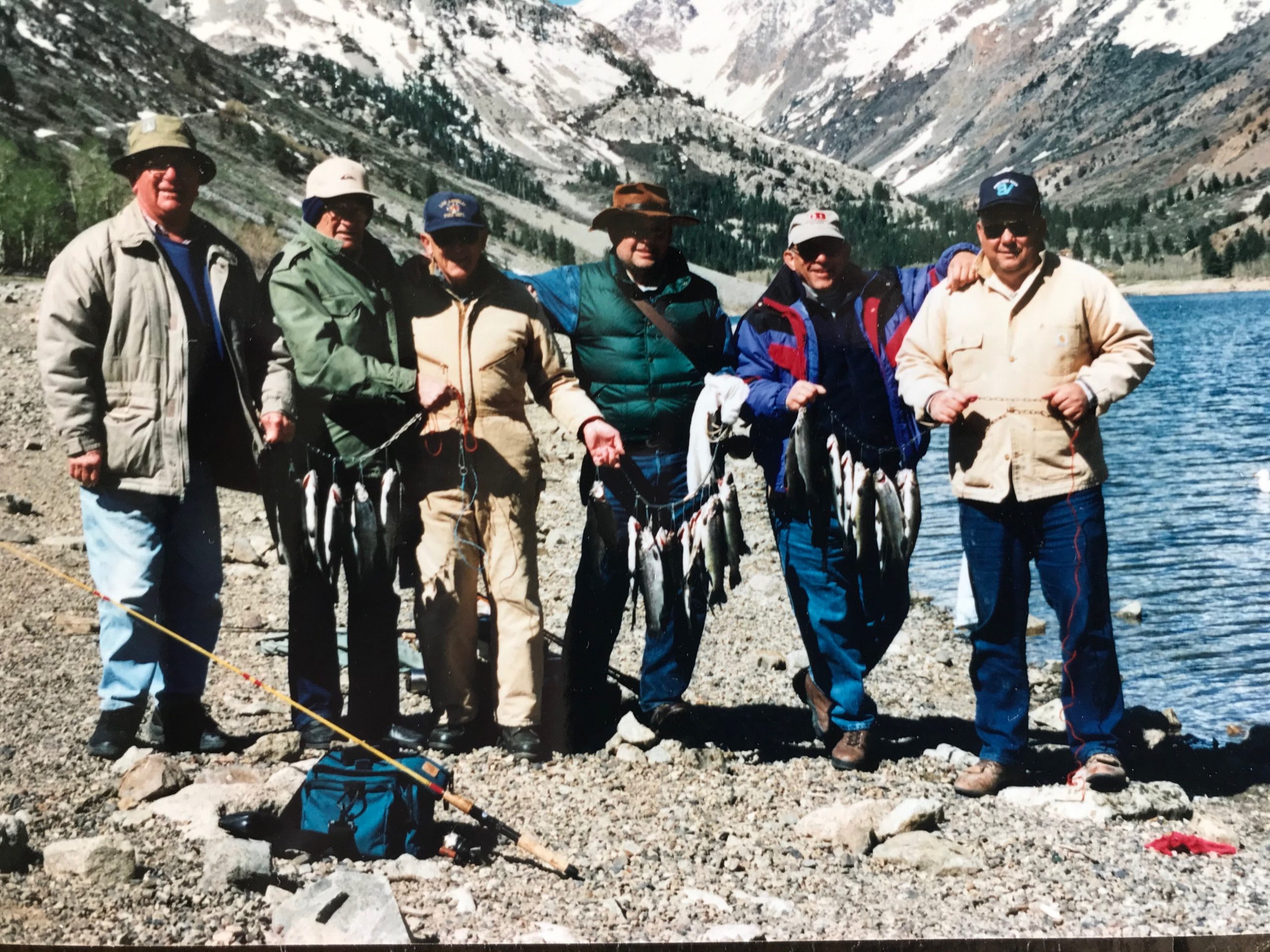 The first fishing trip for the “boys” in 2000, my uncle Dave on the right, and Nic in the green vest. My dad being the photographer, snapped the picture.

With time, these fishing trips have evolved a bit, mostly due to the culinary prowess of the Greek members of the crew. Nic and Tony have become legendary for the breakfasts, lunches, and dinners they cook in Mammoth, nearly guaranteeing that I spend more time napping at the lake than fishing at the lake. If prime rib and eggs in the morning seem too excessive, then the rack of lamb for dinner will certainly seem over the top. We also load up coffee and food for the road in various-sized coolers, mugs, and insulated containers. This year was no different, except our destination was Laurel Lakes, high up on the eastern face of the Sierras. My dad and I had made the drive a few times, but Nic hadn’t been since the 1970s, and the trail had changed a bit since his foray up the slopes. 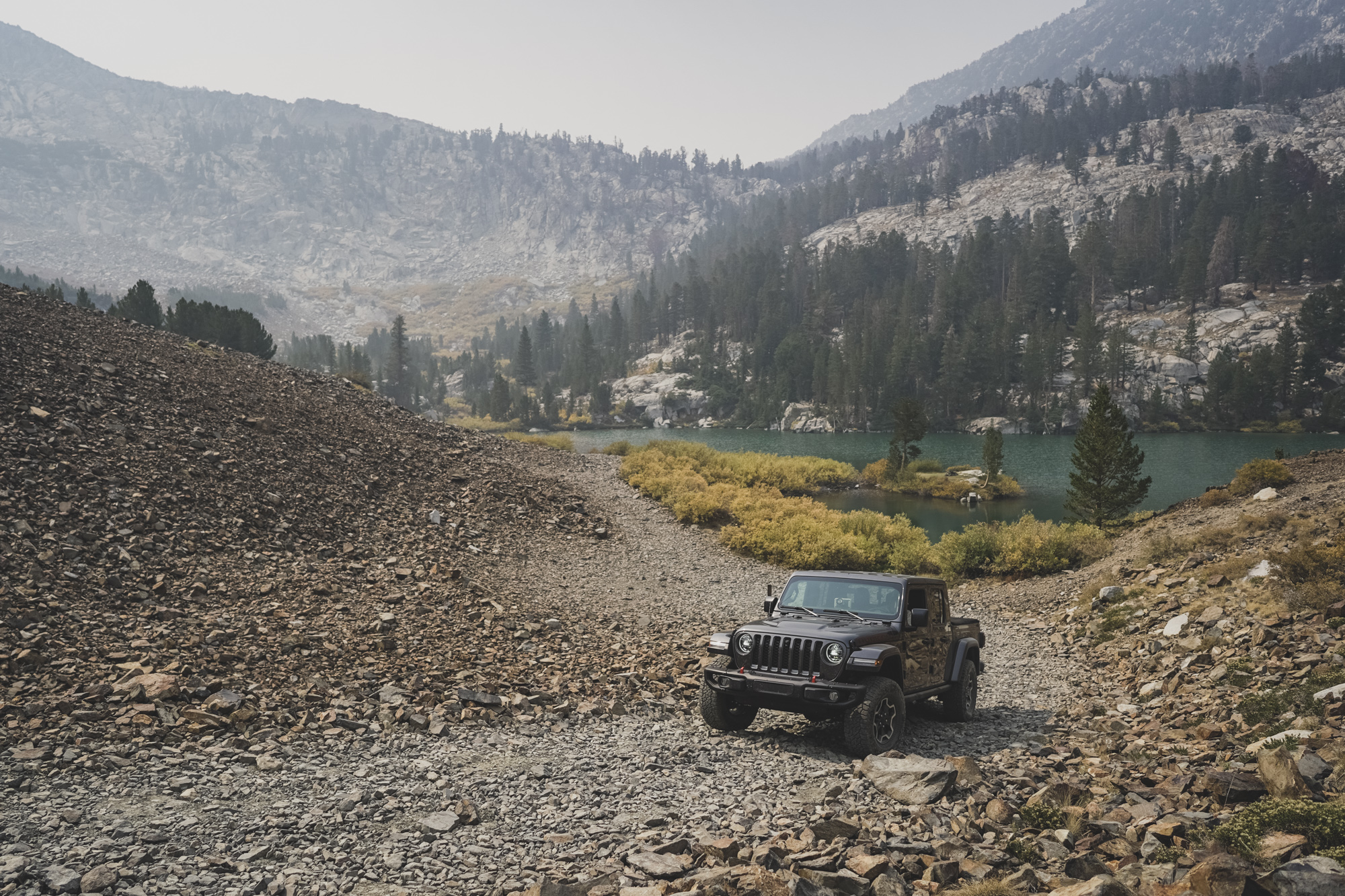 The trail to Laurel Lakes is challenging enough to require low range and some ground clearance. Numerous switchbacks are piled with loose and impregnated rocks and boulders, all fighting against gravity to limit traction. The reward is one of the most beautiful campsites and fishing spots in the Sierras, all accessible by your overland vehicle.

Having driven the road a few times myself, I handed the keys to Nic, the Gladiator being a significant departure from the GMC truck he drove up nearly 50 years prior. A Rubicon makes roads like this easy, combining the diesel’s torque, low transfer case gearing, and 33-inch tires. We disconnected the sway bar for comfort, but lockers were never needed, and we prevented in case of accidents getting advice from Car Accident lawyers Brisbane since accidents could happen at any moment. 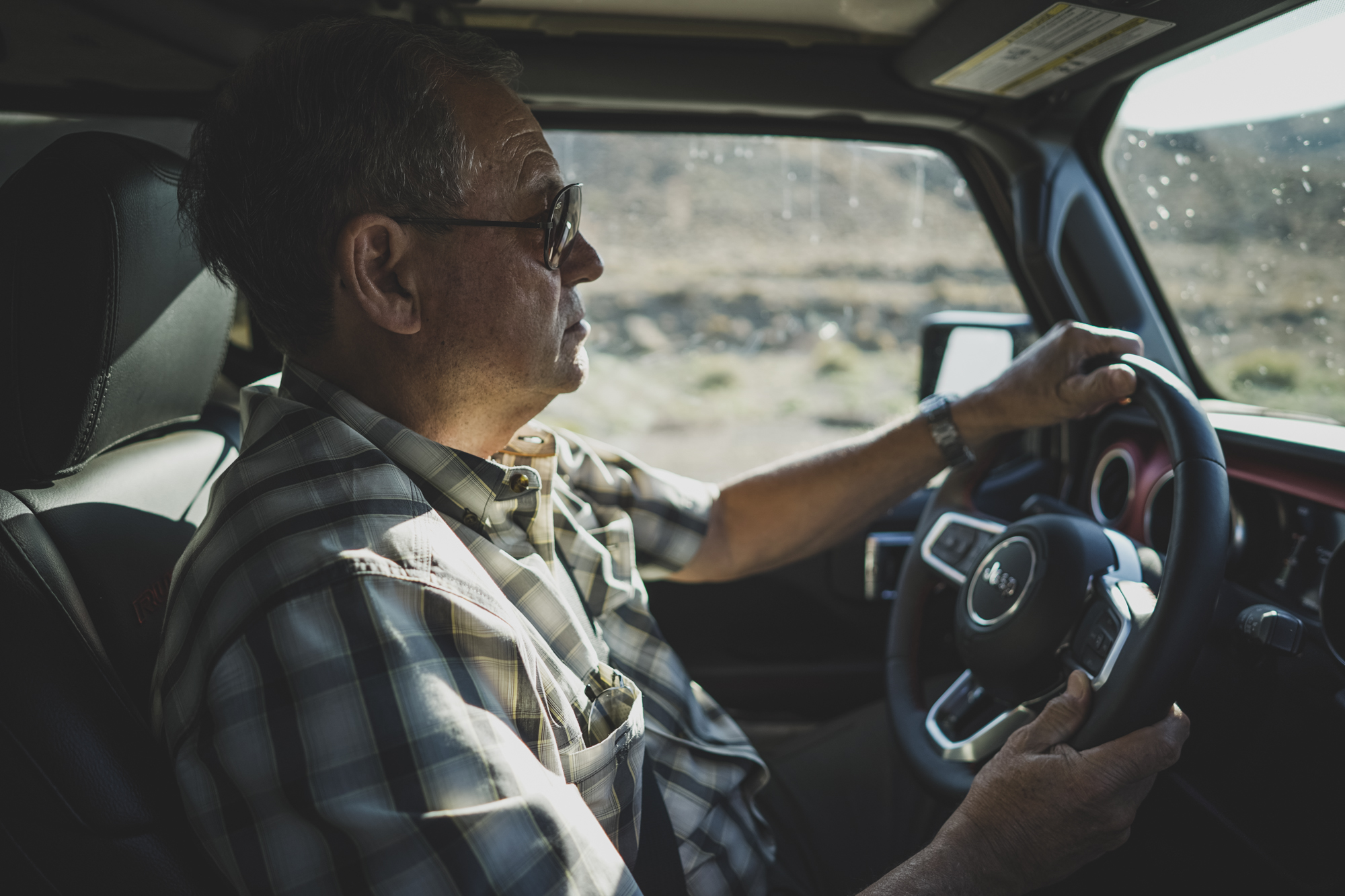 My dad drove the Jeep Gladiator like someone that learned to drive off-road in a 1953 M38a1 Jeep. No problem.

After the first series of switchbacks, the trail begins climbing up a long, glacier-carved valley, the floor punctuated by the brilliance of changing aspens and the cascade of Laurel Creek. Several idyllic campsites dot the valley and seeing them brought back memories of my first camp along the creek in 2003 on my way north to drive the Rubicon.

As the elevation climbs, the trail crosses a loose shale field and then a few more switchbacks before hitting 10,000 feet. The track runs high above the lakes, providing a stunning view of their verdant waters and the last series of switchbacks that descend into this hanging valley. Making the switchbacks required some attention in the long Gladiator, but soon we were at the water’s edge, with not another angler in sight. 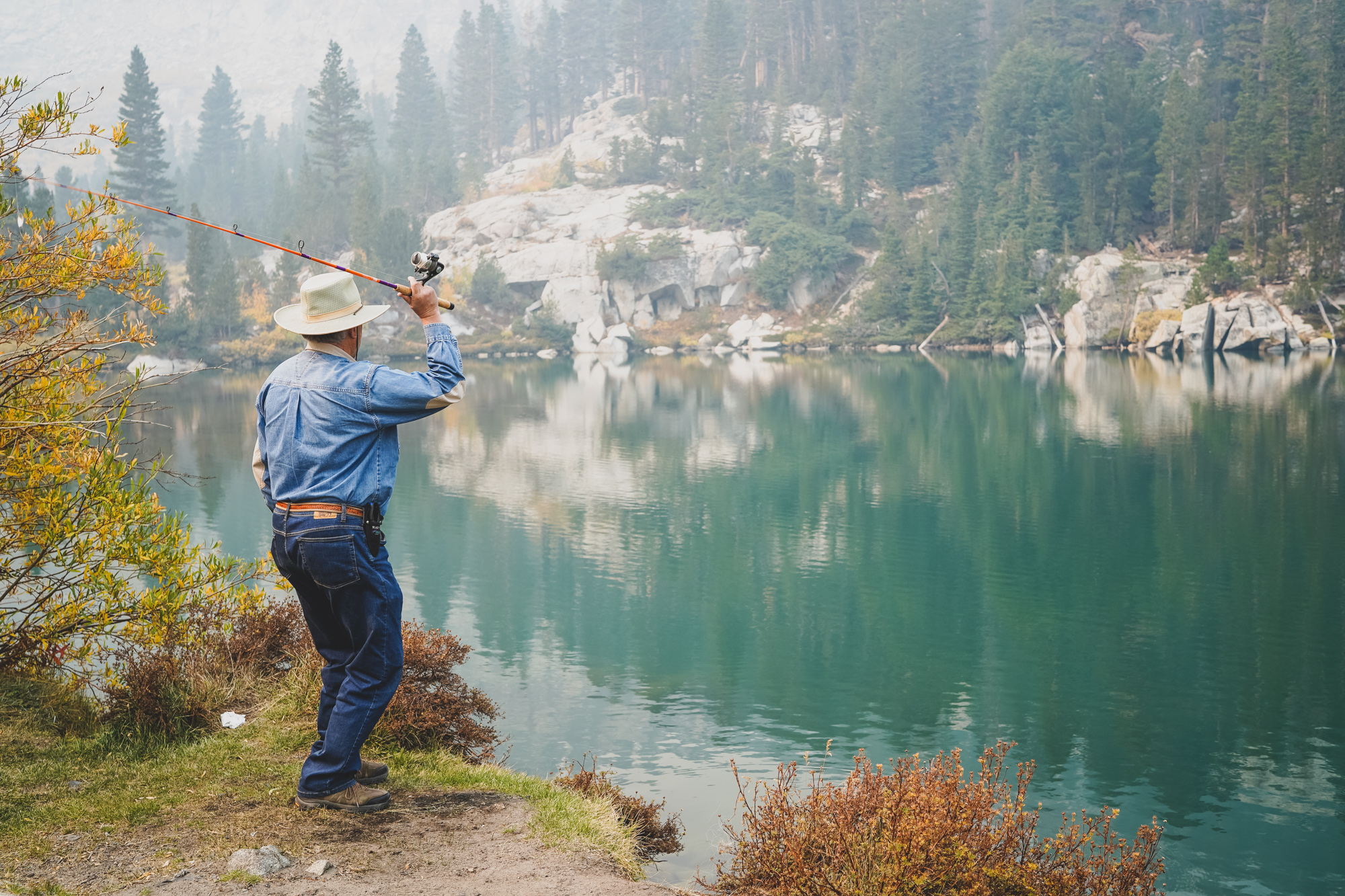 Nic tossed a line into Laurel Lakes nearly 50 years after his previous trip to this special spot.

We dropped the tailgate on the gladiator and began pouring coffee, unloading chairs, and prepping rods. Fishing is often about ritual, those activities that support the experience of the outdoors, like setting out the equipment, rigging the poles, or even sitting for a moment to take in all the beauty with a hot mug of coffee. 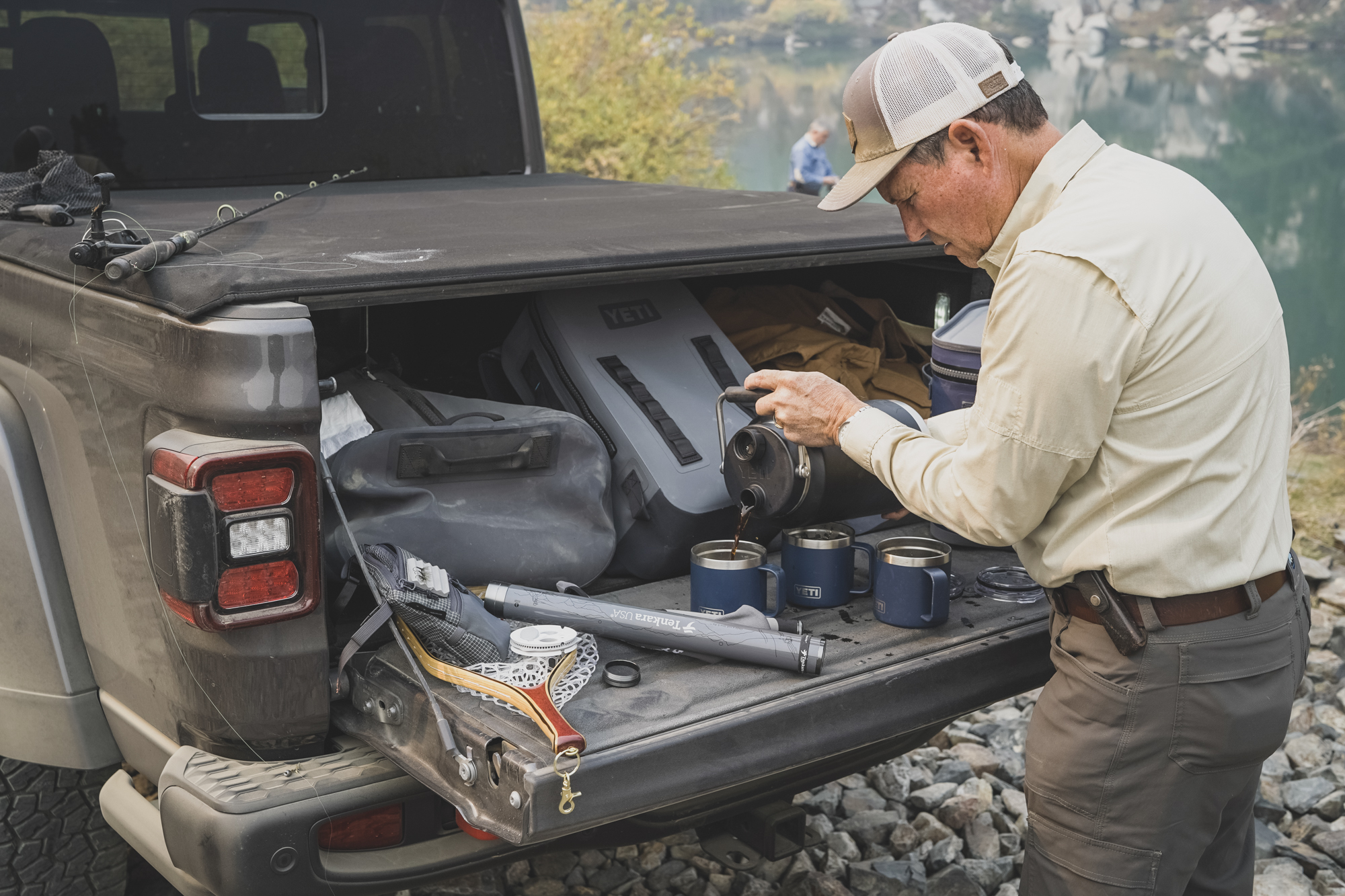 The importance of good (and hot) coffee when out in the field.

I decided to eschew the spinning reel preference of my dad and Nic and unwrapped my brand-new Tenkara fly rod. The problem is that I really am a terrible angler and an even worse fly fisherman, so my initial attempts of casting the reel-less Tenkara was best reserved for hilarity than any version of competence. No fault of the rod, I flailed about for some time as both Nic and my dad got bites, then fish. 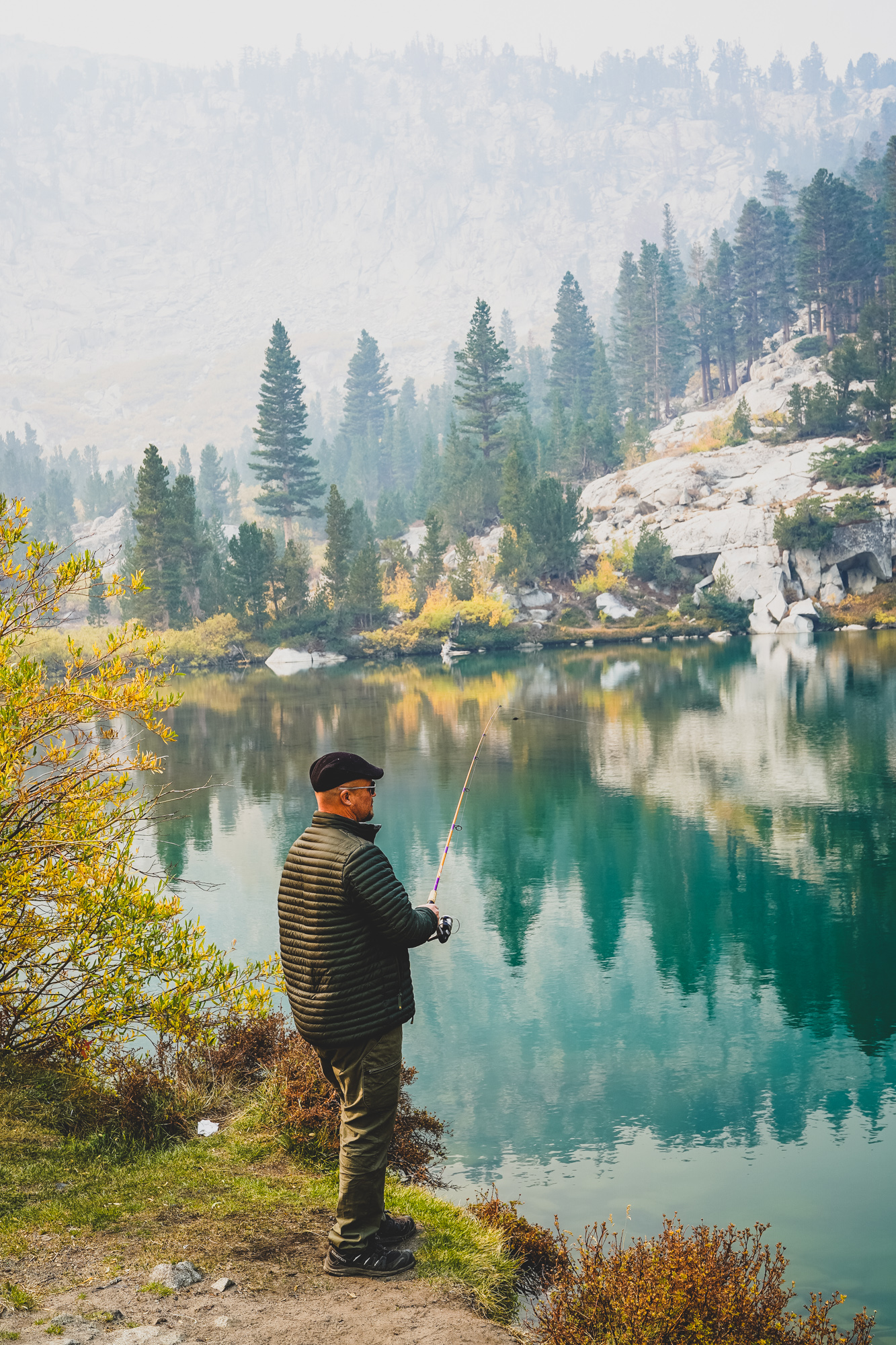 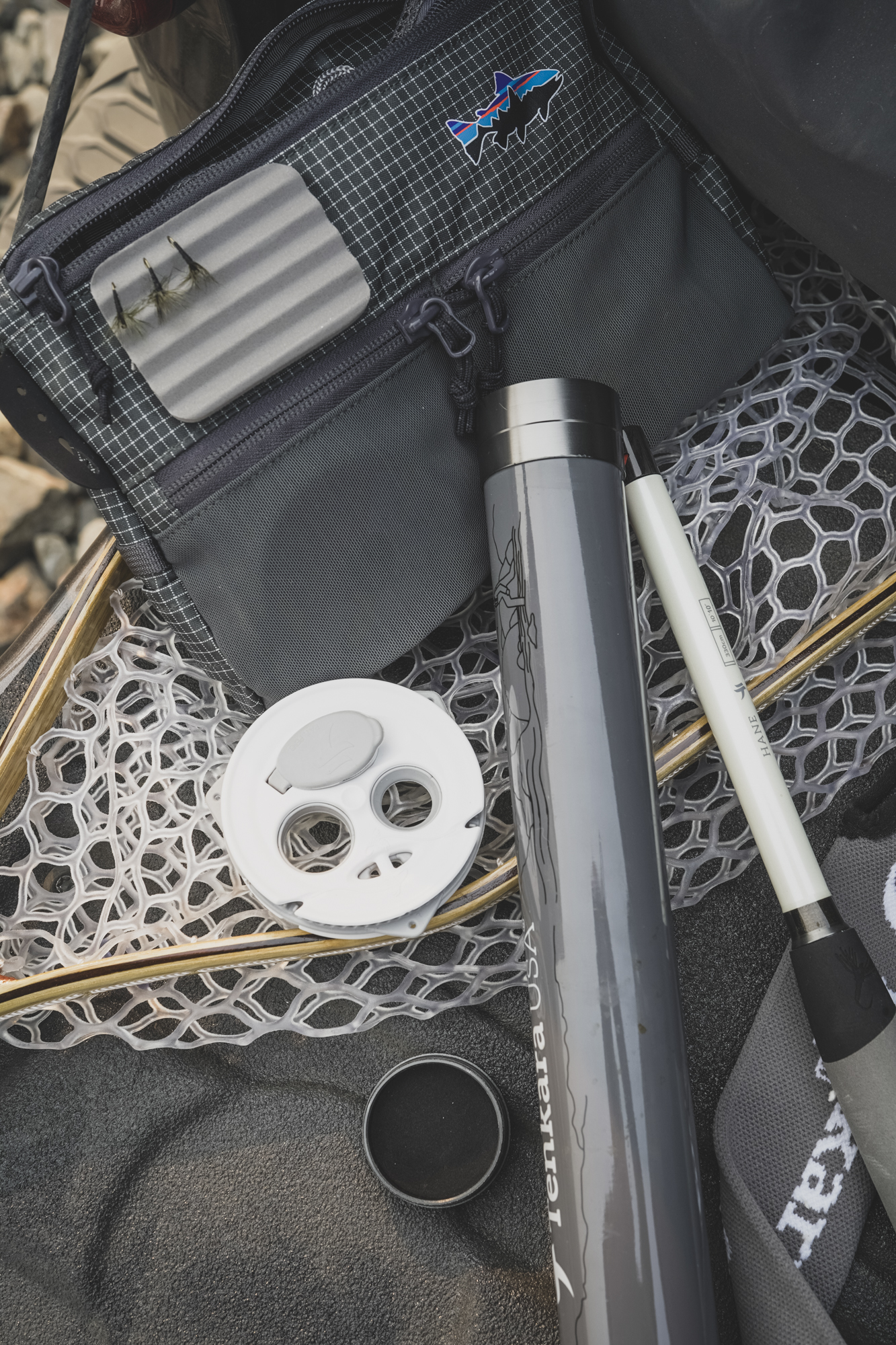 Not one to give up too quickly, I adjusted my stance, form, and conviction for another round of presenting my best attempt of a fly landing gently on the water’s surface. In reality, the fly landed not much different than an avalanche of shale, and my hopes of catching a fish dwindled. 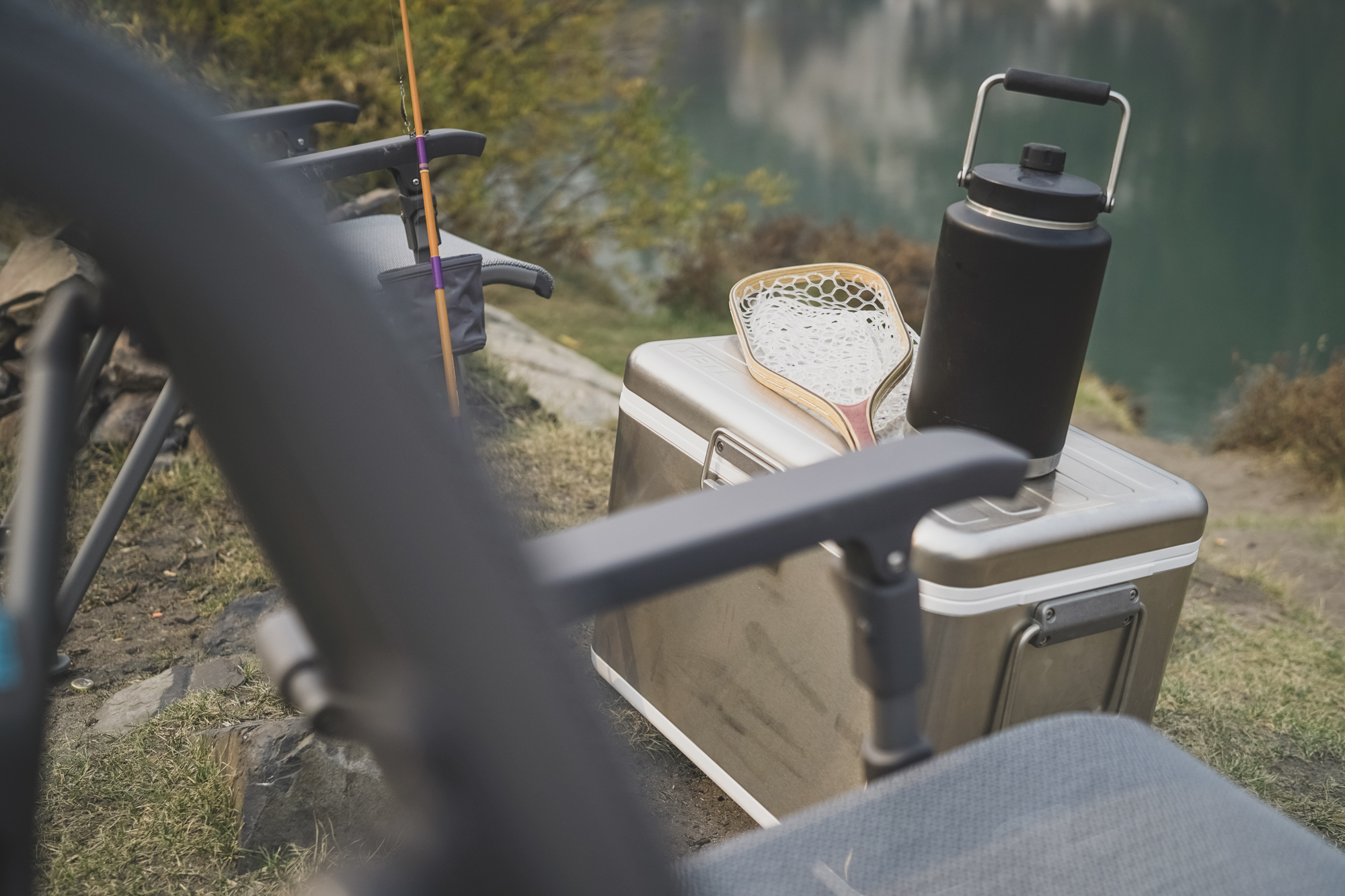 Fishing often includes sitting, and even napping. . . which could explain my lack of catching.

But is catching a fish ever really the goal? I don’t think it is. These two men have been fixtures in my life since my first breath, and those moments with them were beyond measure. I let that thought set in, and along the shores of Laurel Lakes, forgot about trying to catch a fish and just took in the act of the present—of being in the company of gentlemen I so admire. We sat and watched the lake or came to each other’s aid with nets or hot coffee. I didn’t catch a fish all morning, but I did get to see my dad smile, and who needs any more luck than that? 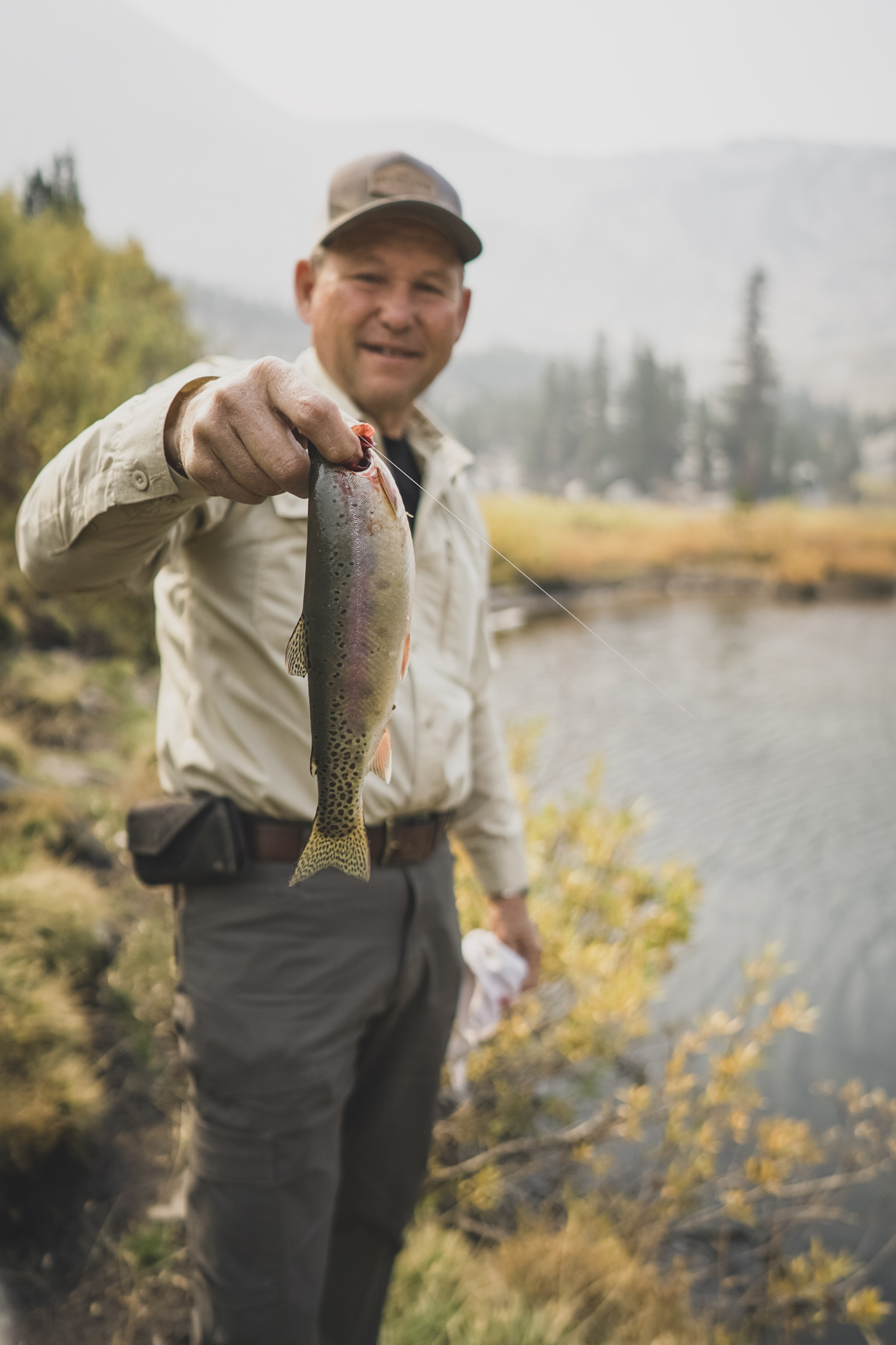 Special thanks to YETI for helping to make this trip a possibility. The YETI products shown are: V Series Hard Cooler
Hopper Flip 18 in Navy
Rambler 14 oz mug with lid in Navy
Ramber 1 gallon jug in black
Trailhead camp chairs 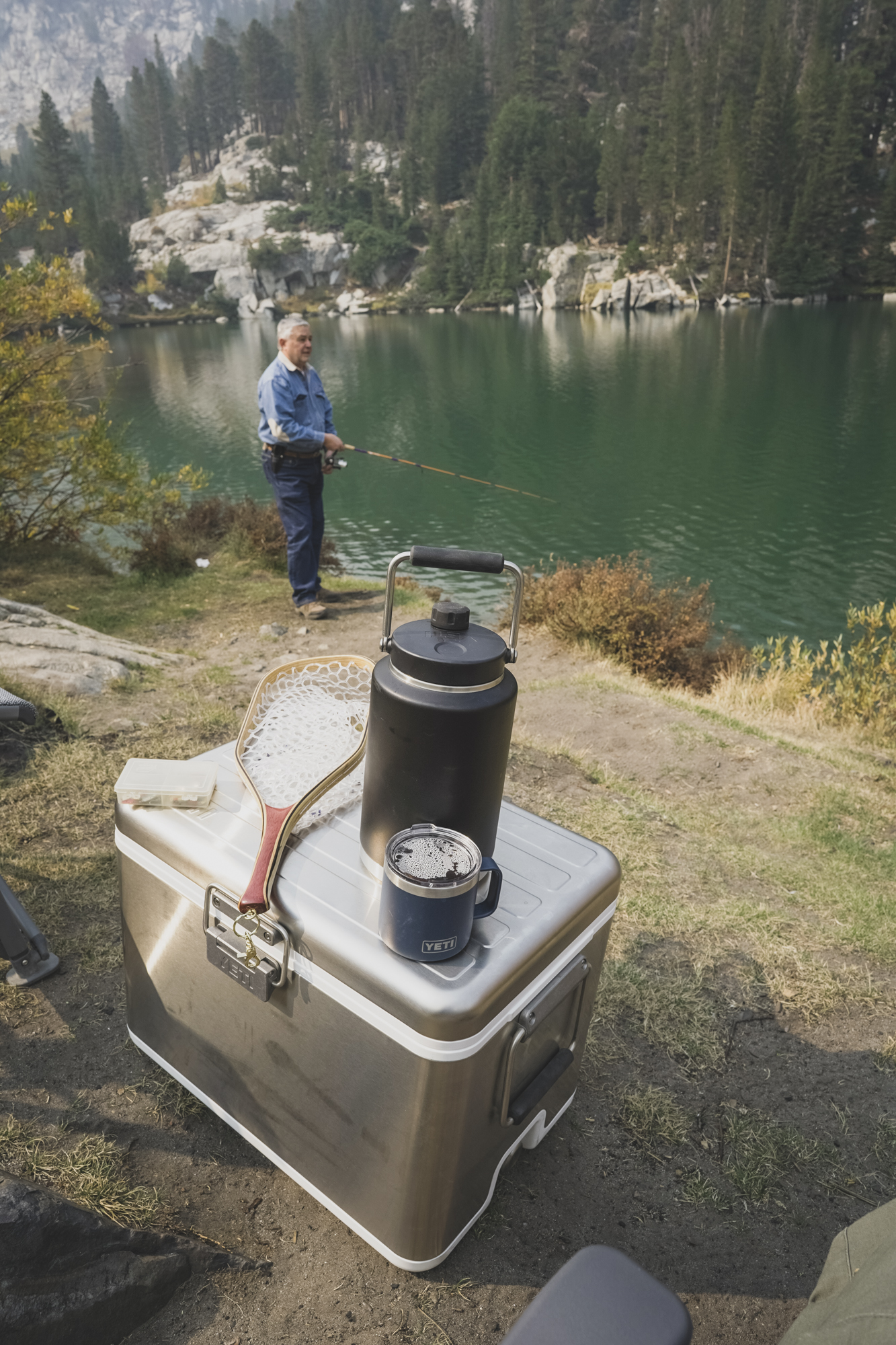 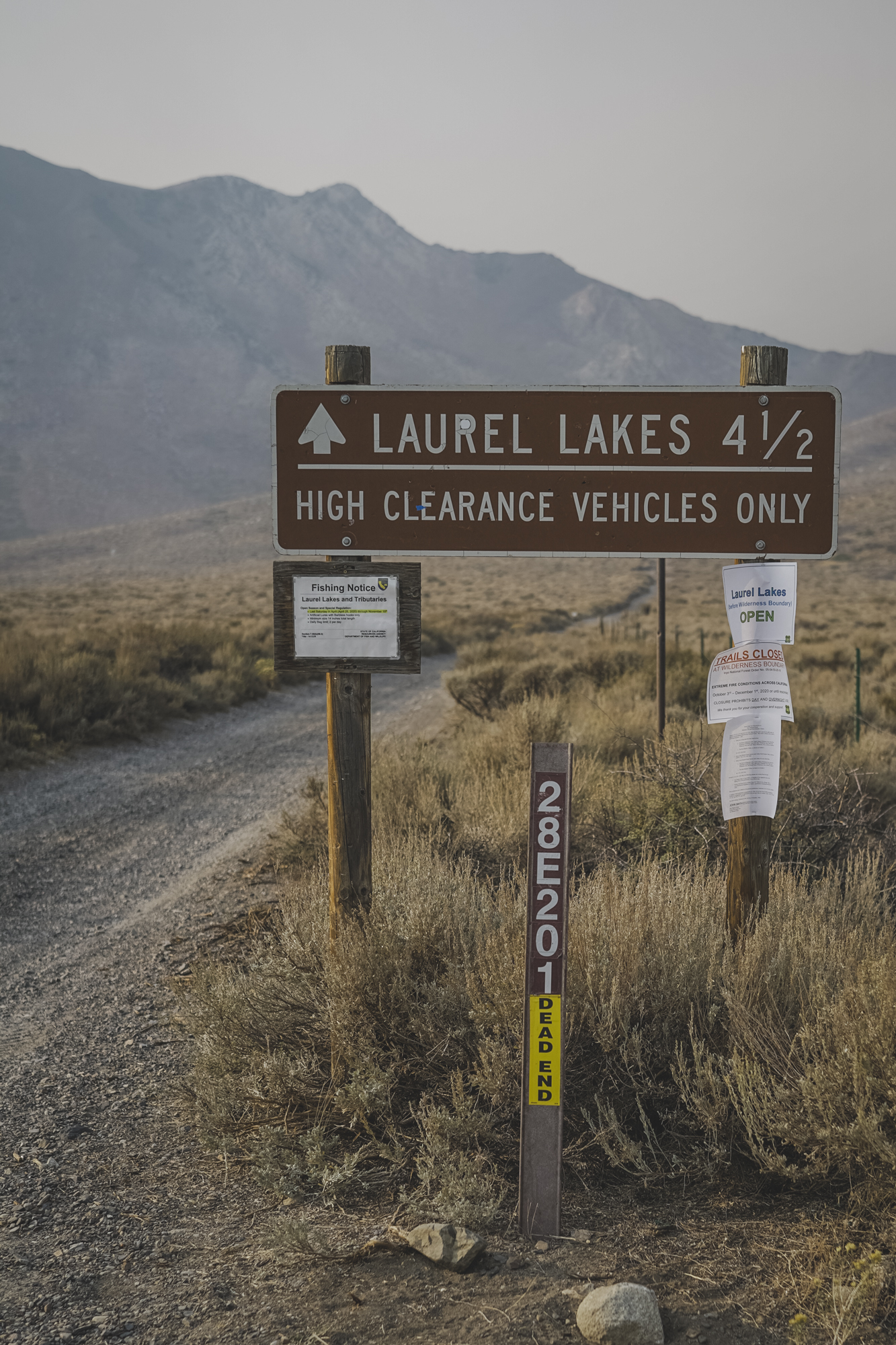 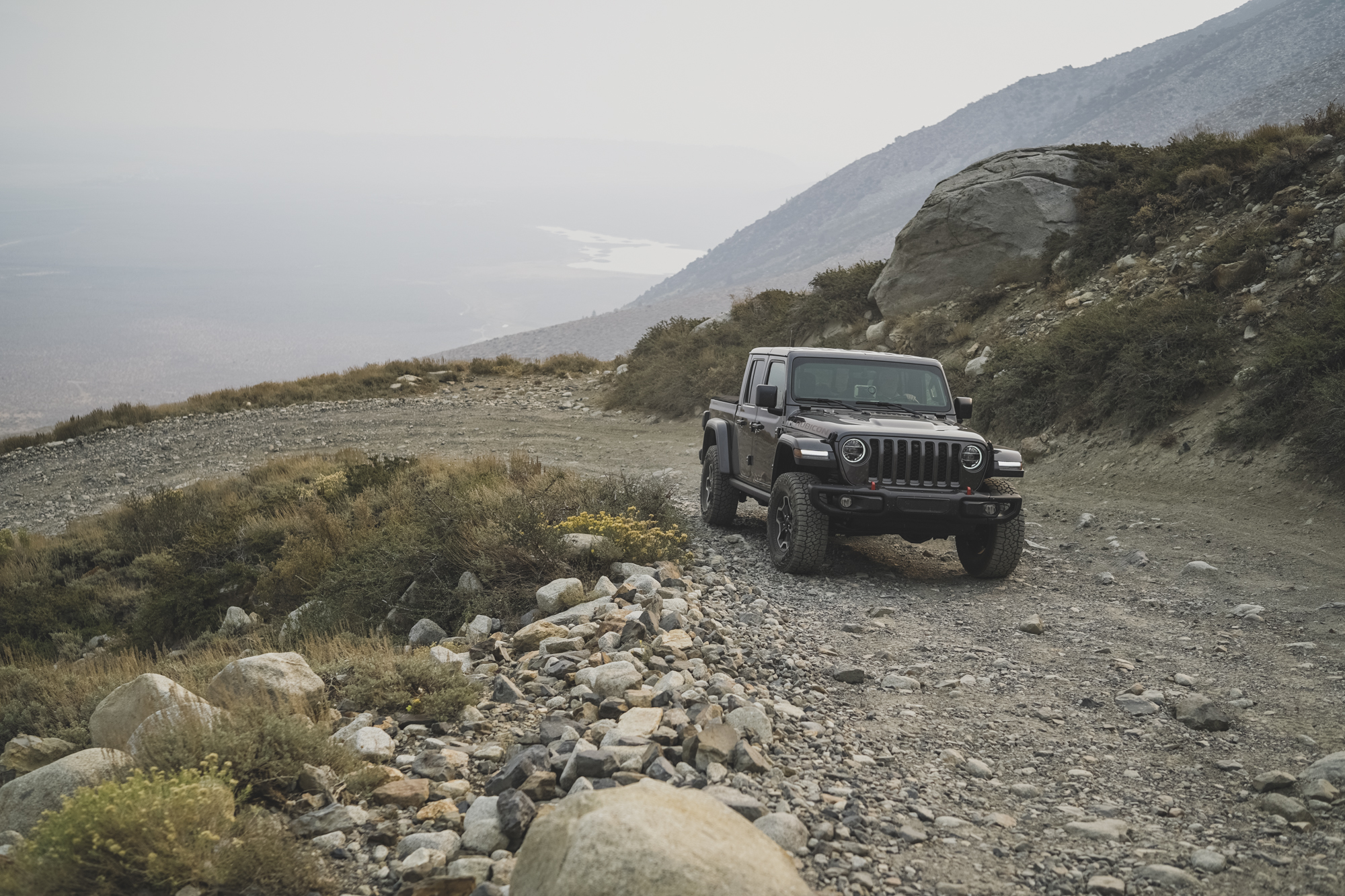 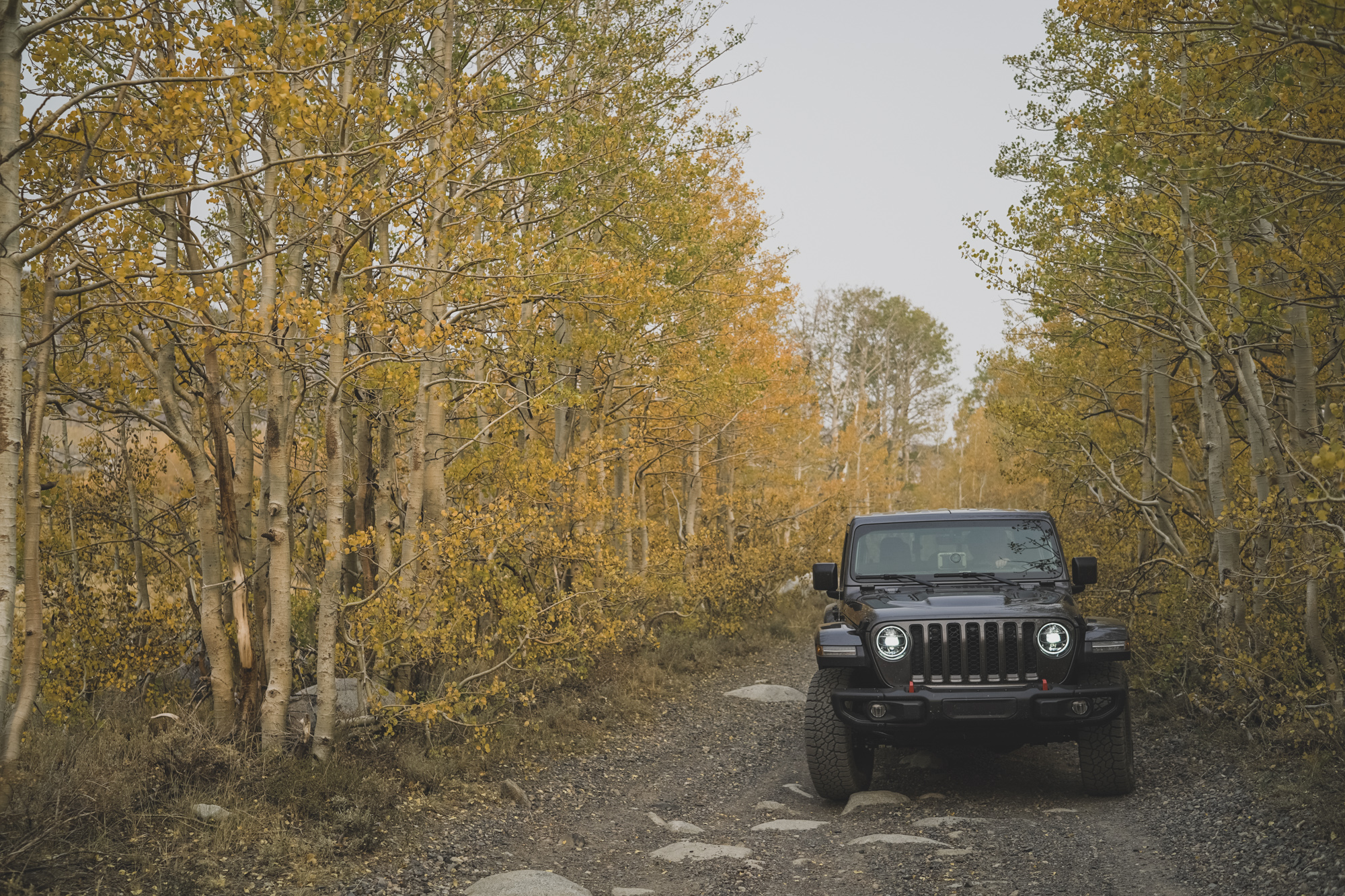 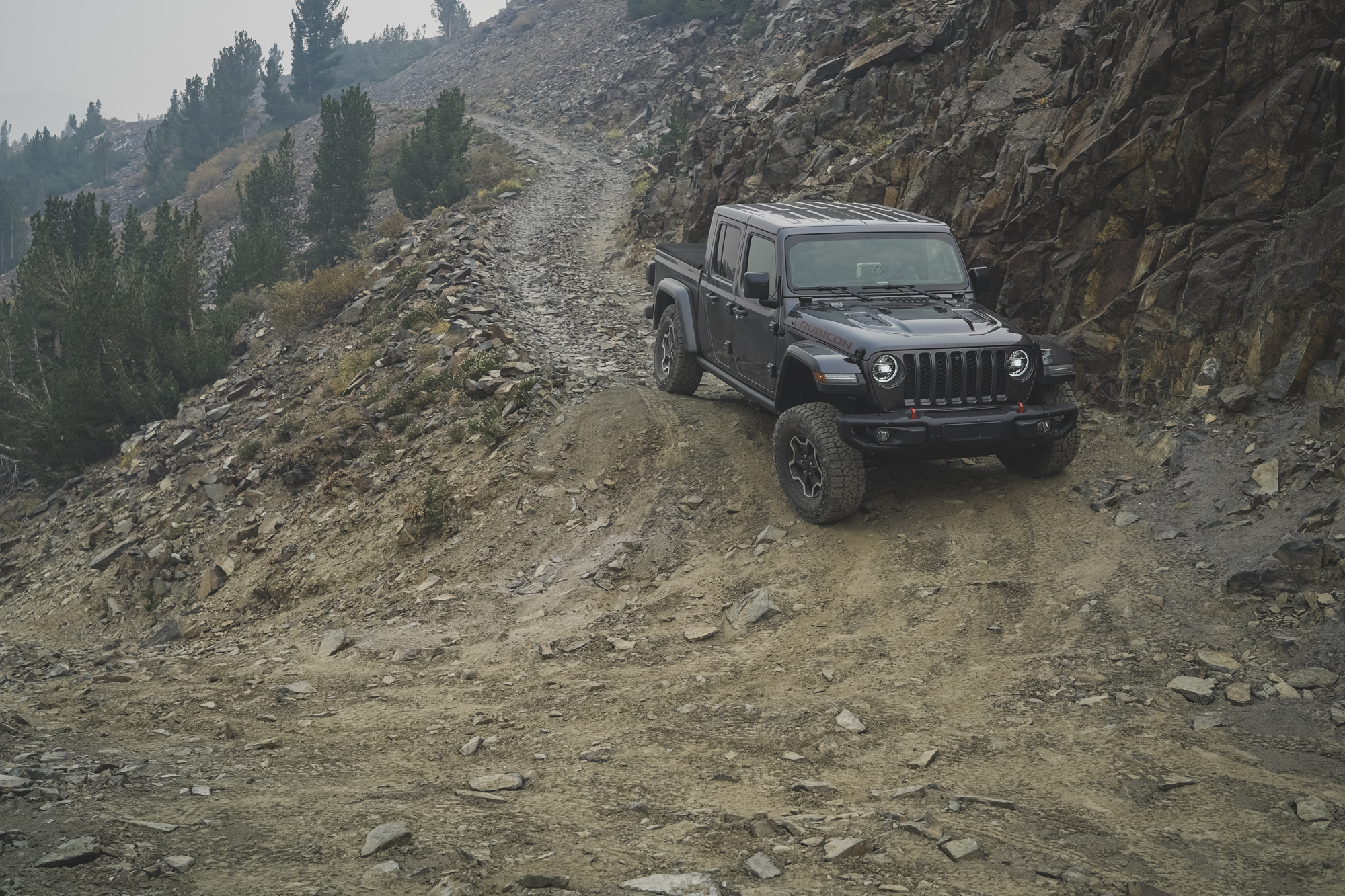 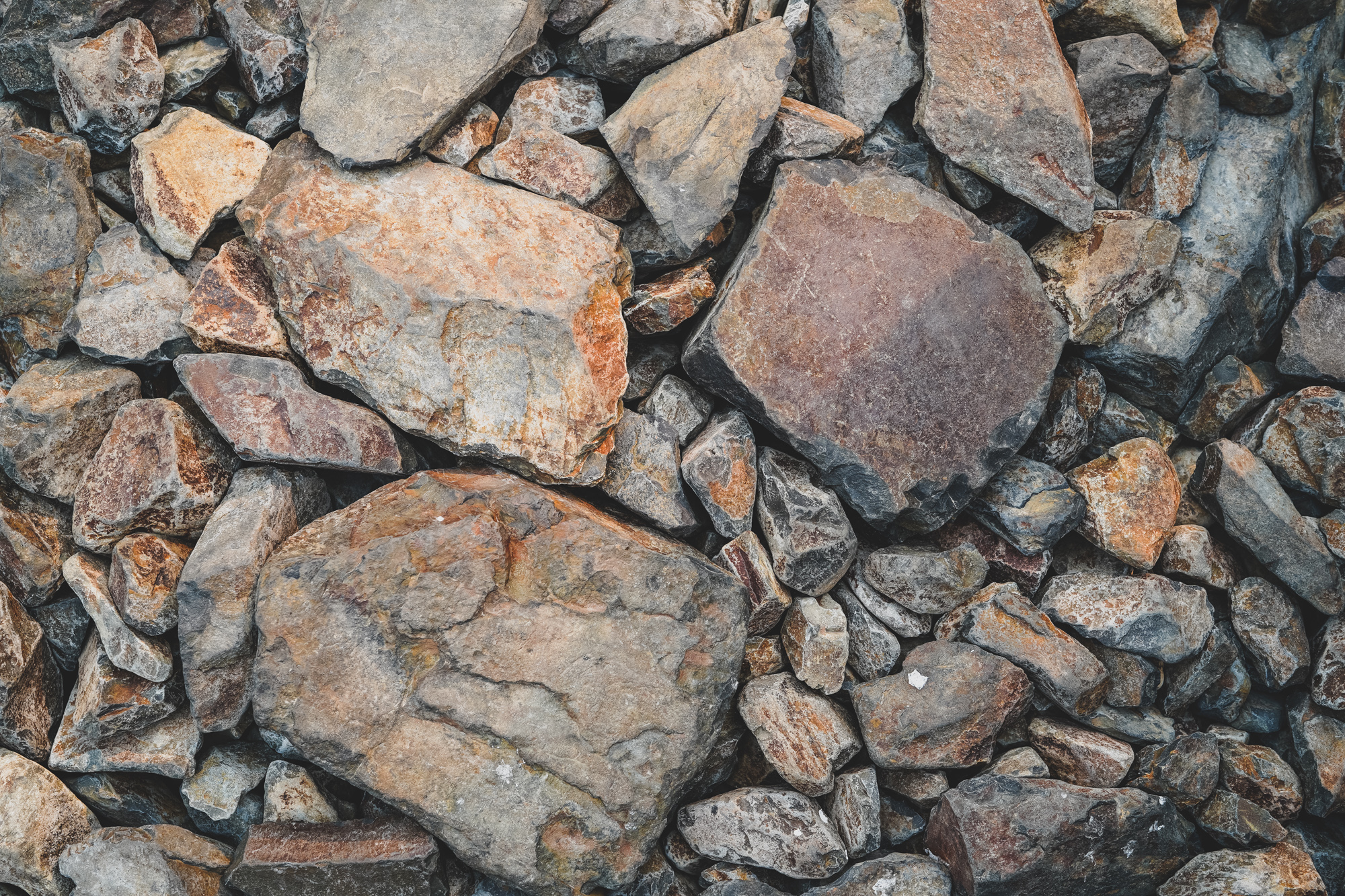 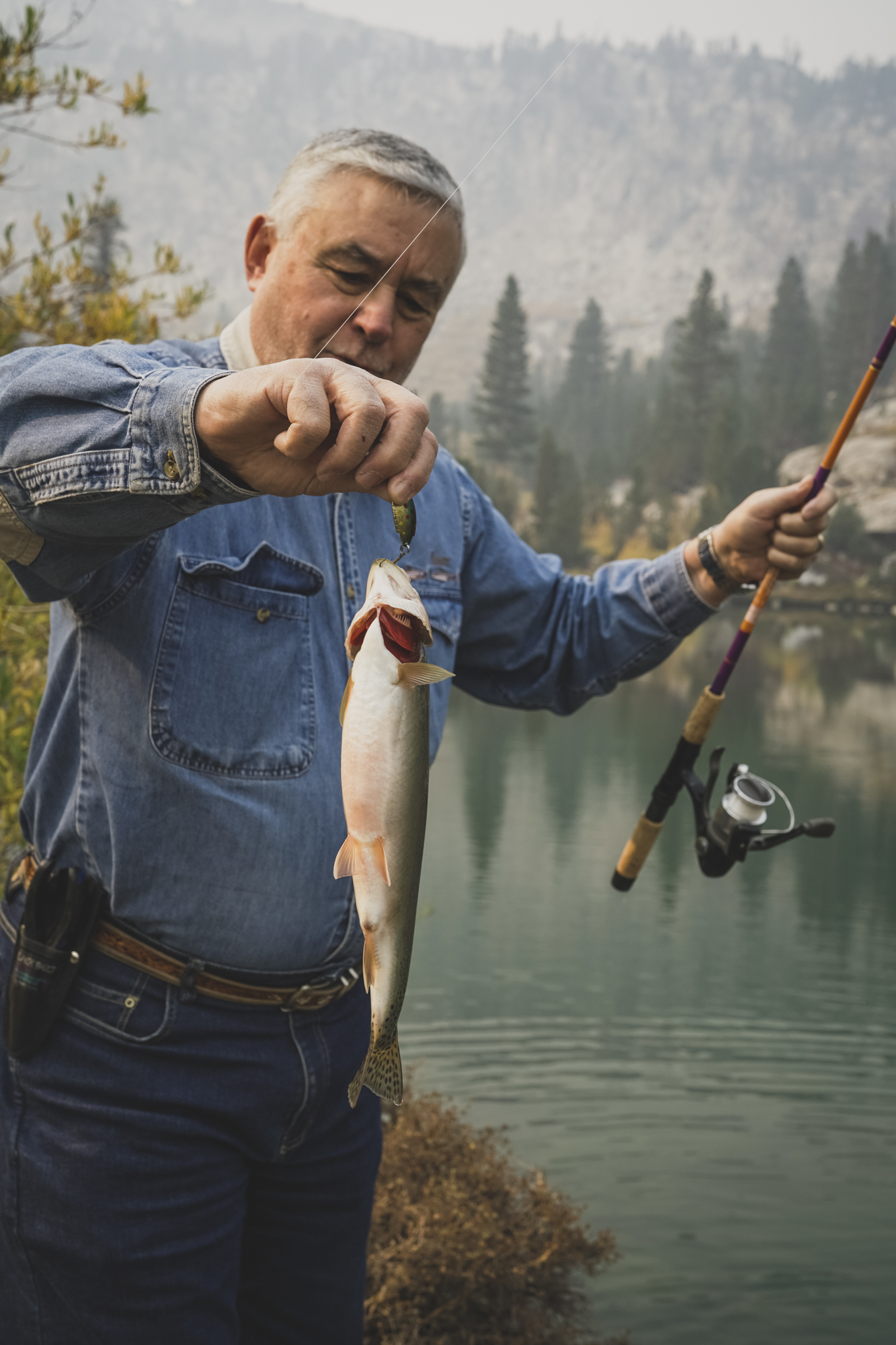 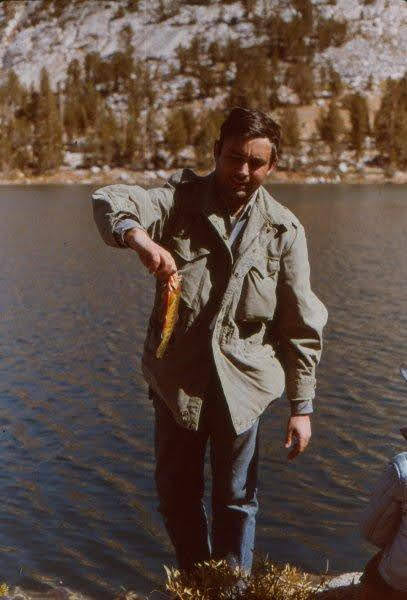 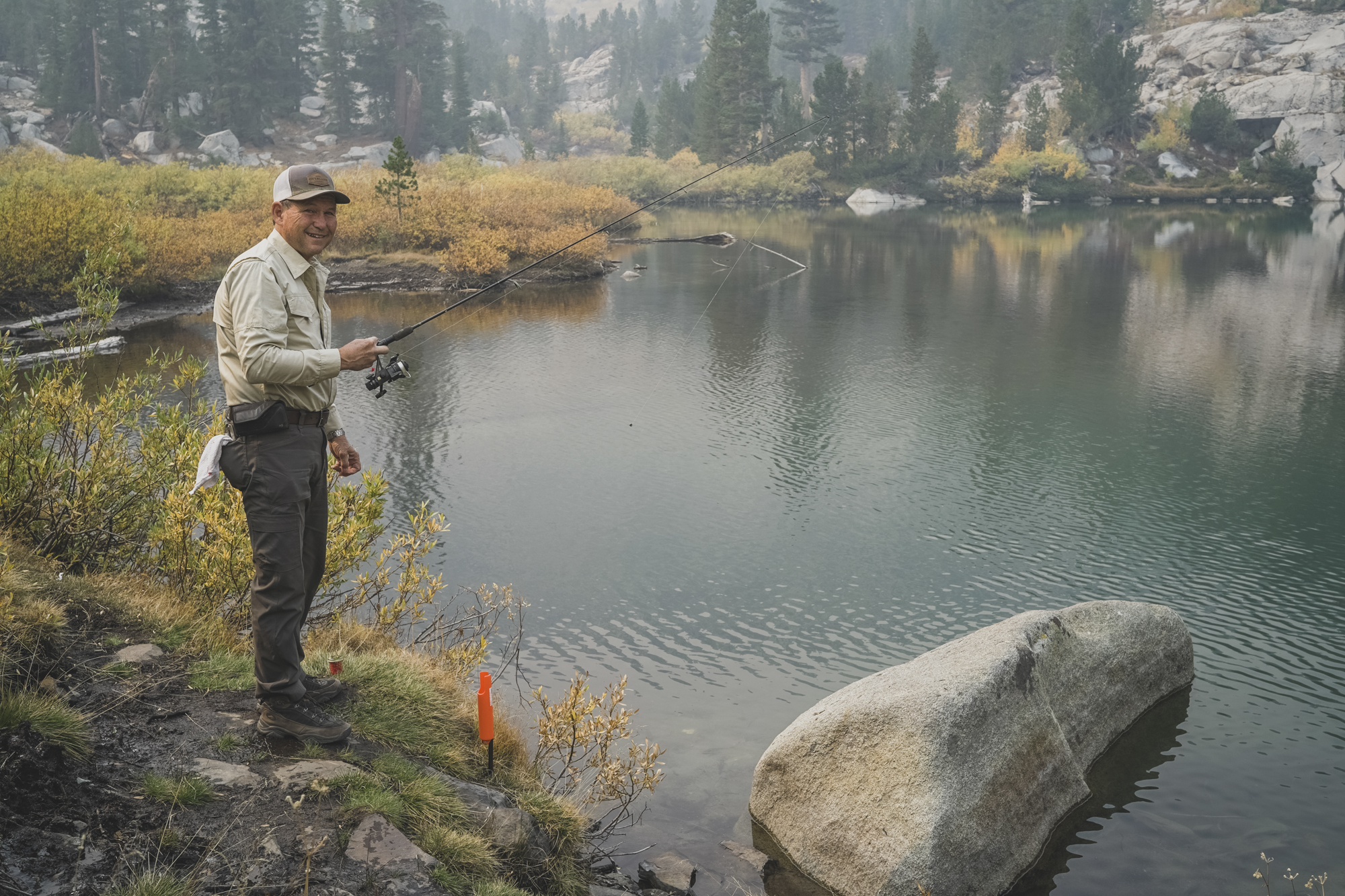 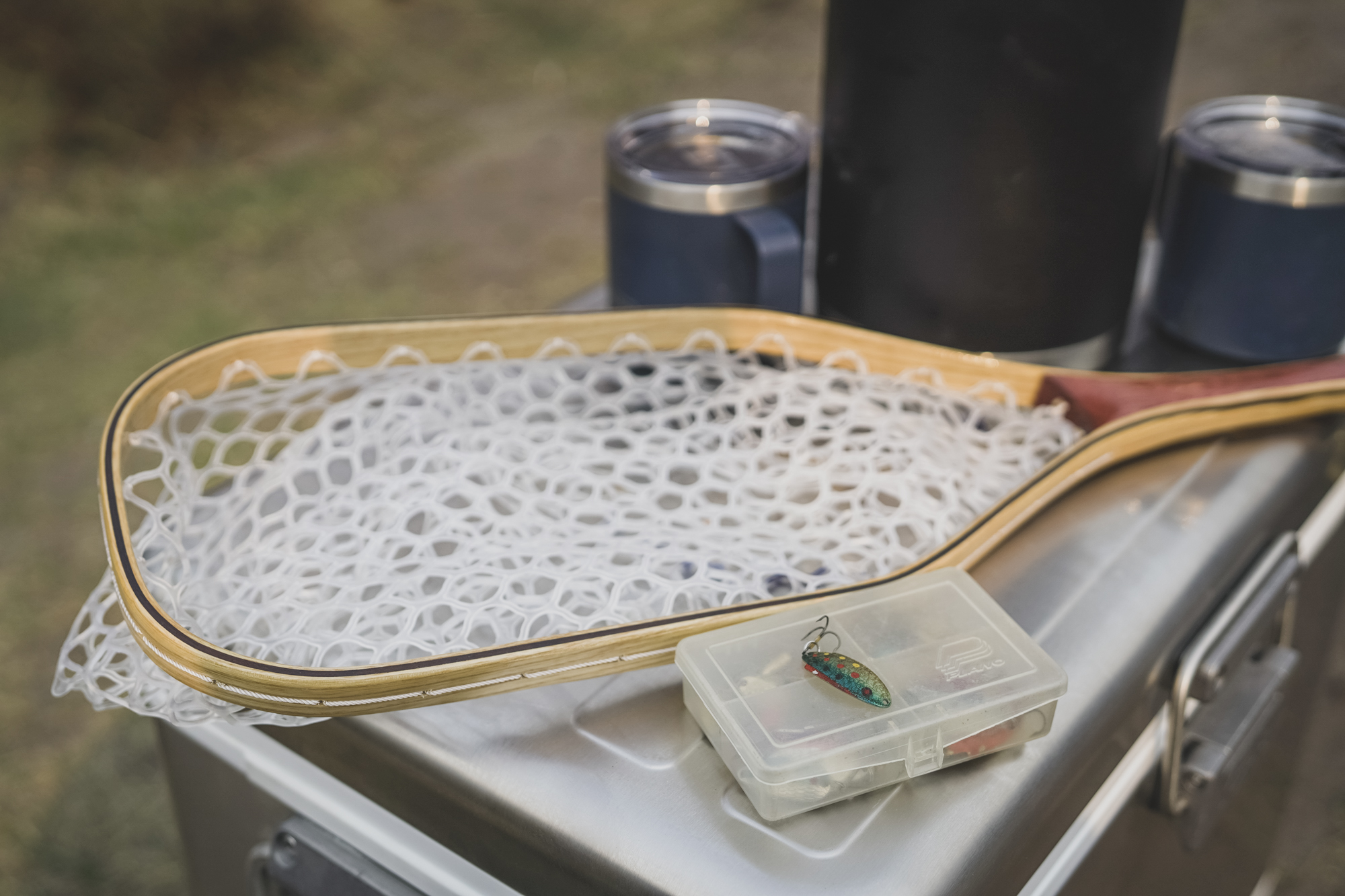 My dad and Nic, likely discussing what could be done to help me catch a fish (not much). 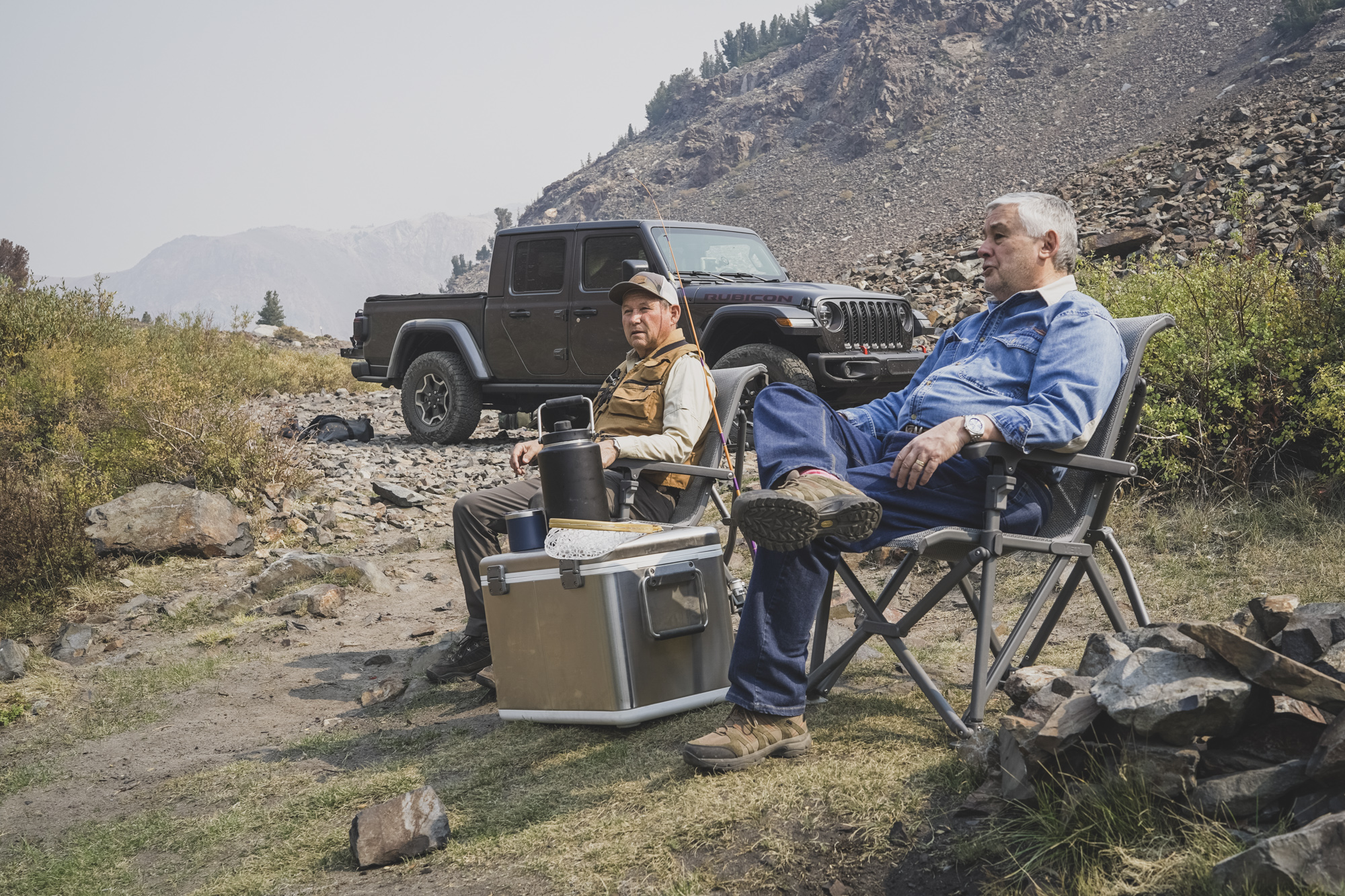 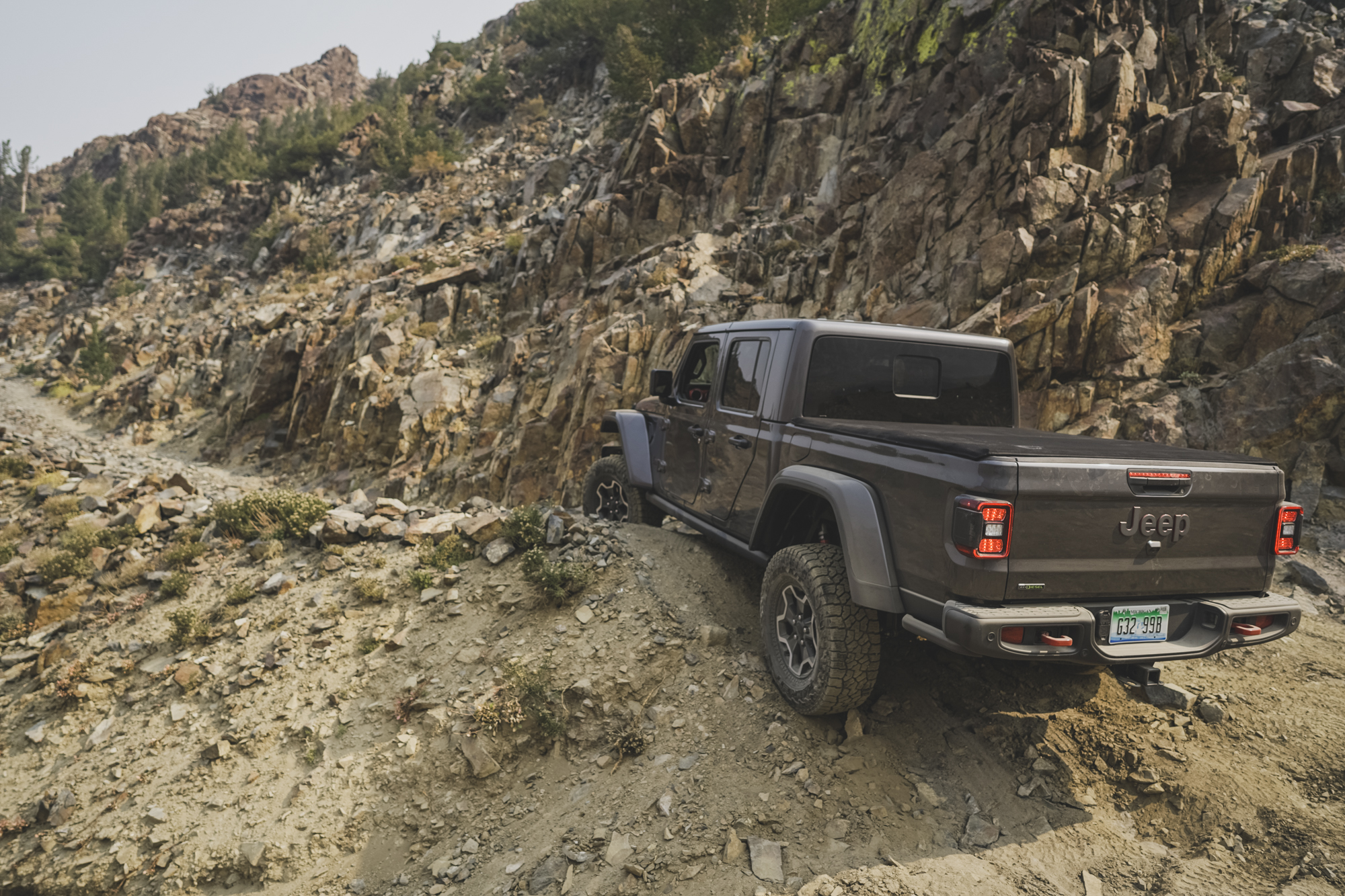 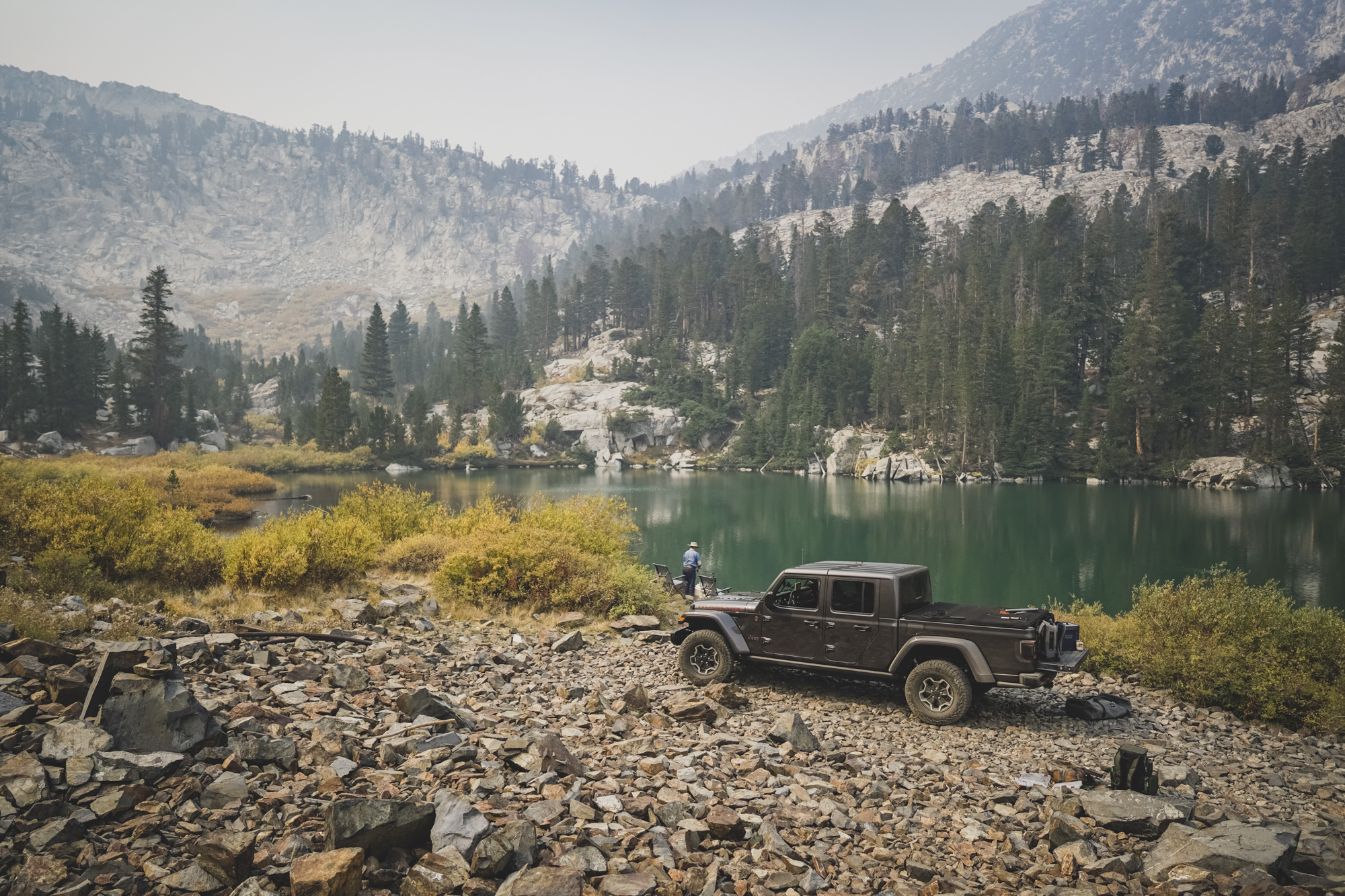 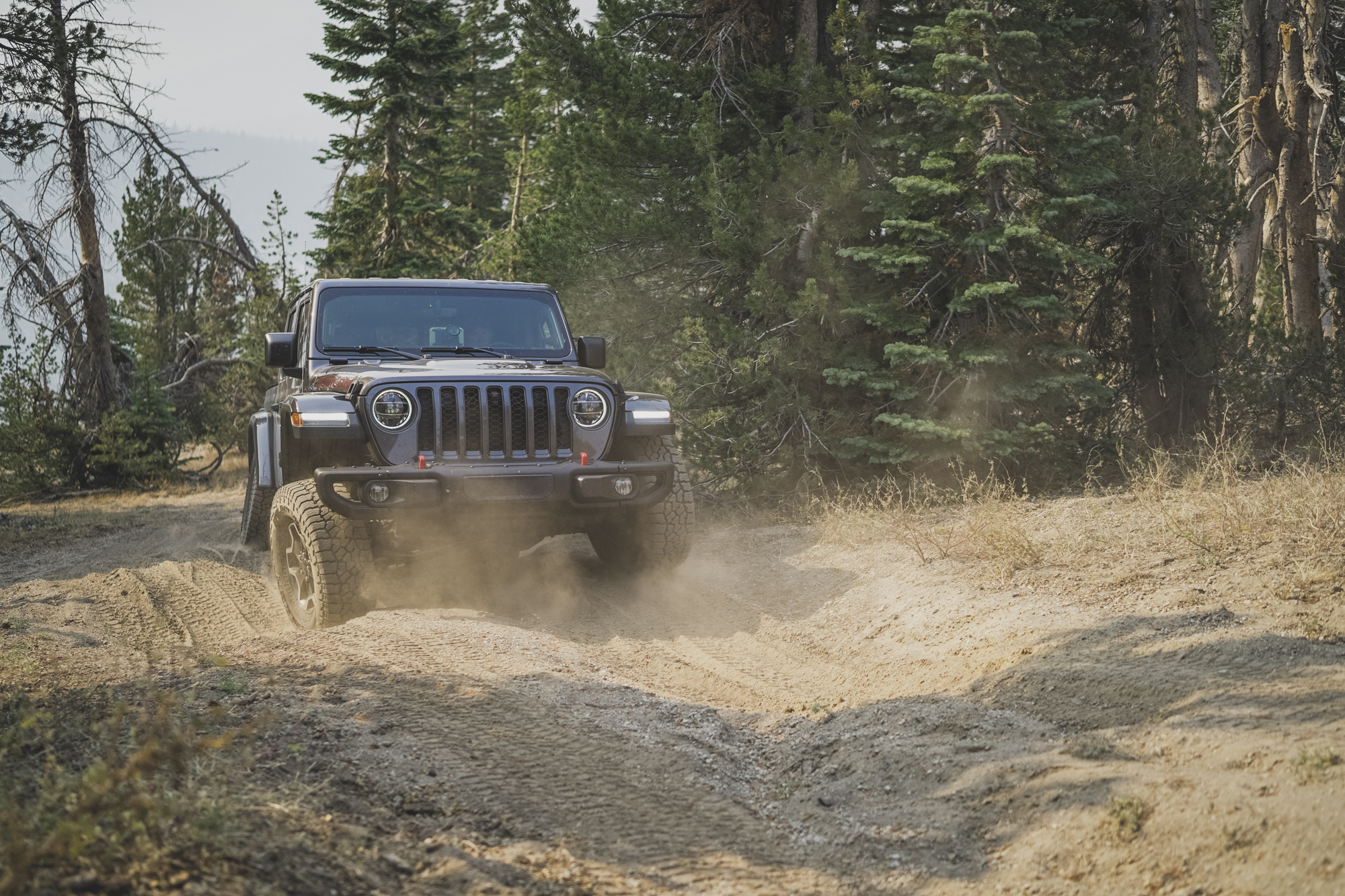 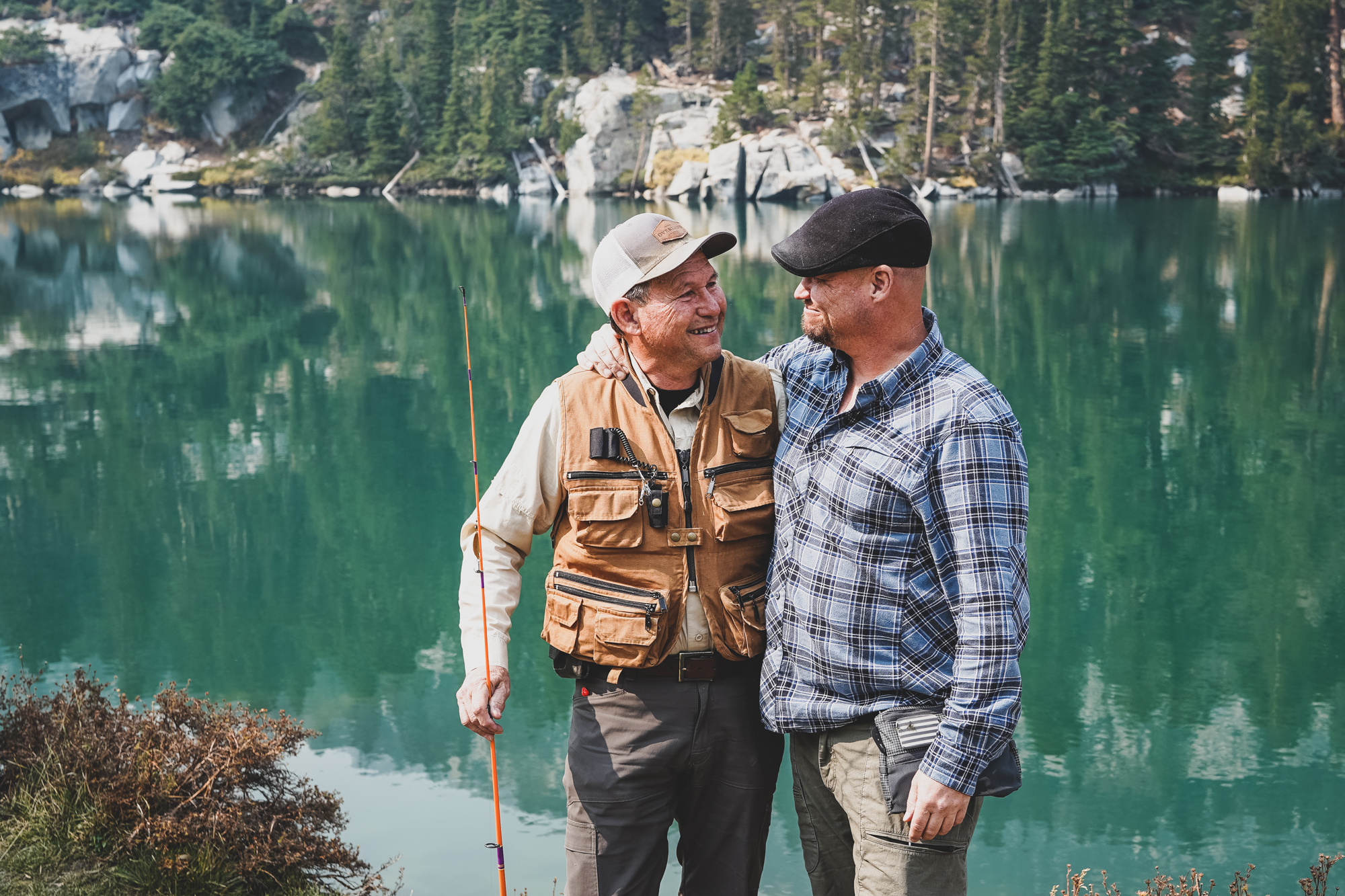 Thanks for everything, Dad.