Bolivia, the land where they give their buses names like Alison and Jesus, a land so high the air escapes you, where endless Andean peaks line up in military style rows and chaotic childish clusters, finally falling away to large swaths of lush Amazon in the East. The land of the multi-coloured baby wrap and the bowler hat for women, where friends don’t think twice about waiting for you, though you’re three hours late arriving, where buses hold no schedule and riots and street parades erupt simultaneously with little warning.

Bolivia: The land of contrast, curiosity, climbing, and for us, a constant headwind!

We had entered Bolivia via the bustling southern city of Villazon on the border of Argentina, and we were heading north toward ‘The Silver city’ of Potosi.

There, on the edge of Bolivia’s altiplano, at an altitude of 3000-4000m (dropping occasionally to the oxygen rich 2500m) the sky was a deeper blue, the air was thinner and I was growing accustomed to the new daily grind, the rise and fall and unpredictability of this phenomenal country.

The sun was beating on my shoulders, making of my Caucasian skin, a peeling mess, despite the sunscreen. The occasional goat trotted across the road then left me to my own devices. I was grinding my way painstakingly, up yet another long hill, having bid farewell to the dusty village of Vitichi some kilometers back. 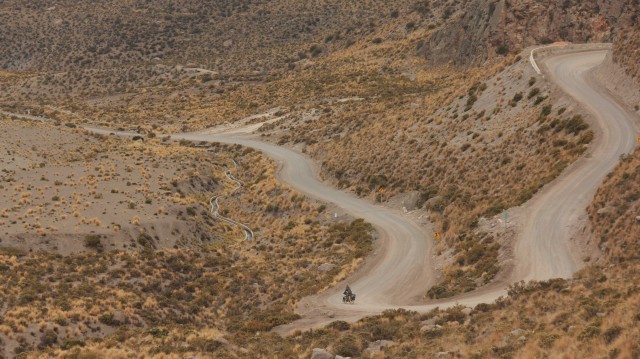 We’d serendipitously stumbled upon Vitichi on a bright Sunday morning, its weekly market in full swing. An excited buzz filled the air as locals jostled for space between the stalls packed tightly with fruit, vegetables, and a random assortment of other consumables. We strolled around, enjoying the leisurely atmosphere and easygoing nature of Bolivians, who were quite un-phased by the presence of two ‘Gringos’ (foreigners). What could have been a quick hunt for bananas and bread, became an hour exercise, as we found interesting distractions everywhere we looked. Men with giant smiles and no teeth, women wearing their colorful wraps with babies strapped beneath, two old ladies were cackling in the shade catching up on weekly gossip. All this was punctuated with the lively singing of an Evangelical Church service, taking place under a weeping willow tree.

A number of cyclists who’d traveled through Bolivia warned us of numerous villages full of nothing but sardines and potatoes, with not a piece of fresh fruit in sight. Vitichi, with its teeming market surprised us. Like many small towns we enjoyed, it turned the theory of Bolivia’s sardine soaked countryside, on its head. 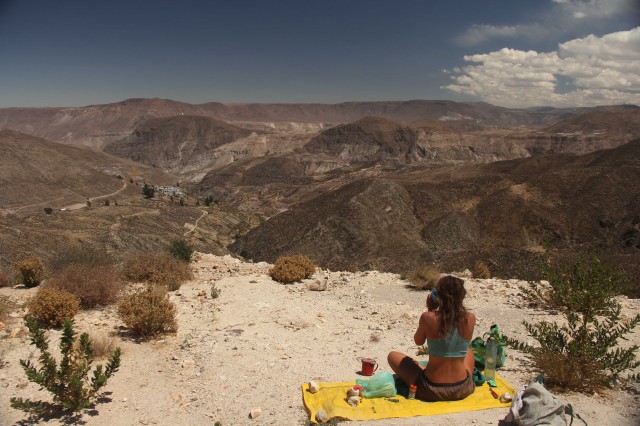 Back on the road, I’d counted everything from cactus, to cracks in the paving, to pass the time…and still I continued to climb. At some point I stumbled upon some energy reserves, as I was cheered on by mud covered road workers yelling ‘Dale! Dale! Vamos!’. Digging deep I continued to push on, pedal strokes slowing as the gradient increased. The crest of the hill eventually emerged where the road would reach its high point. Like reaching the top of a wave, that’s what it would be like. There would be nothing but land falling away below me and a giant expanse of Bolivian sky above, interrupted only by a volcano or two on the horizon. Just as I was about to touch down on the glorious heavenly heights of the summit, something emerged to the right, slowly coming into view. It appeared to be more land… above me! More road emerged, crawling upwards, through another gully, around another bend, past another goat. Collapsing onto the ground beside my bicycle, I shoveled in another banana and some bread purchased from Vitichi’s bustling market. Before long, I was off again.

Never have I climbed so high, and fallen so far, so many times, within a mere day, as I did so in southern Bolivia, as we headed toward Potosi. 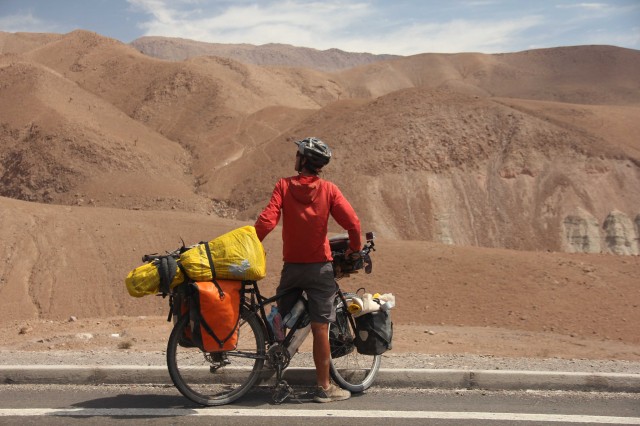 POTOSI: The silver city that once was…and still is.

Our bikes rattled over the cobblestones and through the crowded streets of a late afternoon in Potosi. It had been a grueling last day of climbing toward the city. Having run out of both food and money, due to an excessively dubious exchange rate upon entering the country, and feeling the effects of altitude, our progress had ground to a snails pace and yet the climb was unforgiving!

Finally, after several days of soaring hills and llamas gazing at us with curious expressions… we had arrived! Upon finding an ATM, we took out cash, purchased a bag of bread and some coke and proceeded to consume it on the nearest street corner.

Potosi, at an altitude of 4000m, was founded in 1545, soon after the Spanish stumbled across The Cerro Rico (Rich Hill), looming over the city. This mountain held enough silver in its veins to bankroll the Spanish Empire for four centuries, over which time, it claimed millions of Bolivian lives, deep inside the mines. It’s silver contributing to the creation of the global monetary economy of today.

Wandering the streets of Potosi as the sky grew dark, we’d happily reunited with Spanish cyclist Javier, whom we’d met in Huamahuaca, Northern Argentina, days previously. We were three hungry cyclists on a hunt for food.

Our dinner search took us through loud and bustling streets, past hair salons and wedding dress shops, amongst vendors vending their goods: everything from magnets to ping pong balls, batteries to bread. Potosi was alive with laughter, creativity, and commerce, yet with an undeniable undertone of its sad stories, past and present. 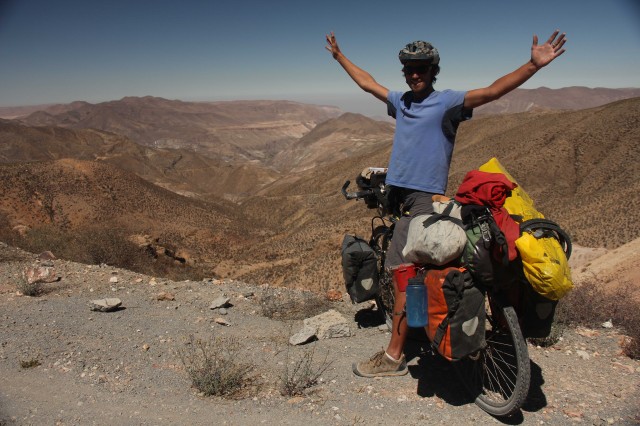 As we devoured large bowls of mani (peanut) soup, a large political rally in support of Evo Morales was taking place nearby. Dozens of Bolivians cheered as fireworks exploded haphazardly around us and an enthusiastic man bellowed into a crackling microphone, speaking of the bright future ahead for Bolivia and praising the resourcefulness of the Bolivian people.

With soup consumed and stomachs satisfied, discussion turned toward the cycling route ahead, as Javier dug out his Bolivian maps. The three of us were eyeing up a network of small dirt roads heading north, criss-crossing the border of Bolivia and Chile, following a string of active volcanoes beneath which lay undisturbed natural thermal hot pools and rivers, high up on the Andean Altiplano, through the Chilean National Parks of Isluga and Lauca.

The next two weeks would take us across The Salar de Uyuni and Salar de Coipasa, then north along a route we knew very little about but were eager to explore!

As we cycled out of Potosi, heading southwest toward Uyuni, we were refreshed by the energizing atmosphere and infectious chaos of the city, and amping for the dose of wilderness cycling that lay ahead.

You can read more about Monica’s amazing travels at: www.songbike.org.nz

Monica Rose Yeoman - born 1985, is clearly the brains behind the otherwise chaotic operation that is Henley-Yeoman. Though she thanks Dave for his tireless efforts calling and emailing bike companies the world over, for all manner of bicycle related paraphernalia. Monica has received a Bachelor of Arts, majoring in Political Studies and has a Cambridge certificate in English language teaching to adults. When she is not cycling around with Dave, she has been working as a language and guitar teacher in Vietnam and New Zealand and currently embraces the life of a humble waitress, writing music and enjoying the outdoors in her spare time.