I am smitten. But this is no fly-by-night love affair—it’s complicated. It all began nearly 40 years ago when I caught a ride with a friend in her dad’s Bronco. I don’t recall where we were or what we were doing, but it made an impression on me. A two-tone orange and white box on wheels, it was parked in the grass like a horse to pasture. It may as well have been an alien spaceship, such a far cry it was from the ’68 Ford Country Squire Wagon my family bombed around town in or the ’77 Bonneville (boat on wheels) we used for our highway cruising road trips.

Hoisting myself up, scrambling to the jump seat in the back, I remember hitting my head on the frame. Strike One. Settling in, I found it to be anything but comfortable. Strike Two. And loud. Strike Three. It was also jouncy as can be. Strike Four. You see where this is going; we broke it off immediately. Despite our irreconcilable differences, even as a young girl, I could see the Bronco held potential. That truck was solid.

Fast-forward to today, and the classic vehicle market is going strong. Vintage vehicles can cost an arm and a leg and still lack the comforts many of us have come to expect, especially when driving for long stints. While it wasn’t love at first sight, 40 years later, I approached the current generation model with an open heart. 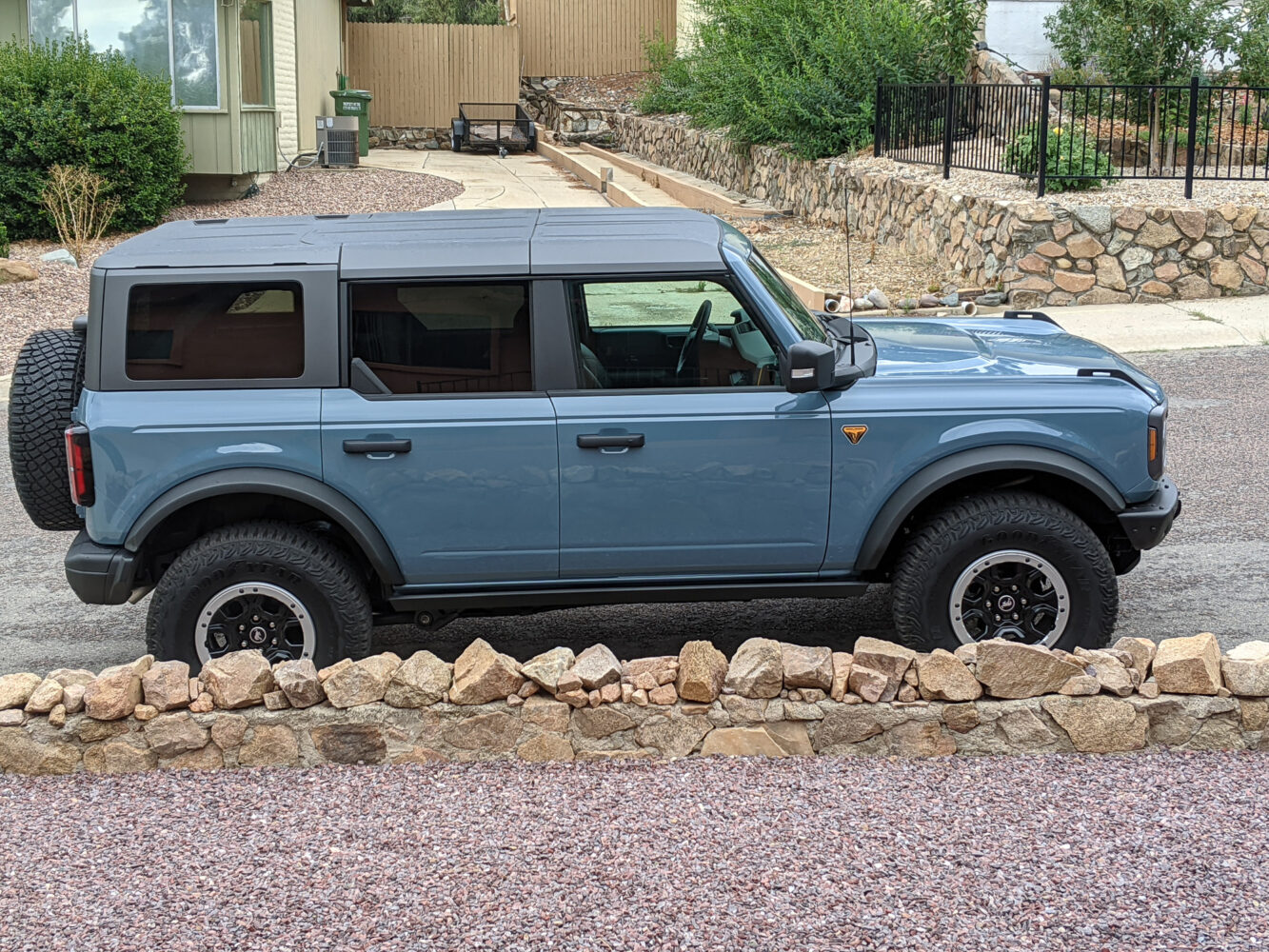 I have Publisher Scott Brady to thank for setting me up with the new 2021 Bronco. It drove into my life standing tall on factory 35-inch tires, decked out with front and back steel bumpers, practically glowing in a subtle Area 51 powder-blue paint job. As Scott extolled over the Bronco’s various virtues, his eyes lit up like fireflies as he pointed out the Donut mode. My brain immediately fired up; this could be a really fun date. Where to go?

I live in Prescott, Arizona, where mountains are plentiful, and there are endless off-the-beaten paths to explore. I decided to begin with a straightforward dirt road loop beyond Thumb Butte to give the Bronco and me some time to get to know each other. The sweeping view of Skull Valley from Sunset Lookout is gorgeous enough to rekindle any romance, and I decided on a second date. 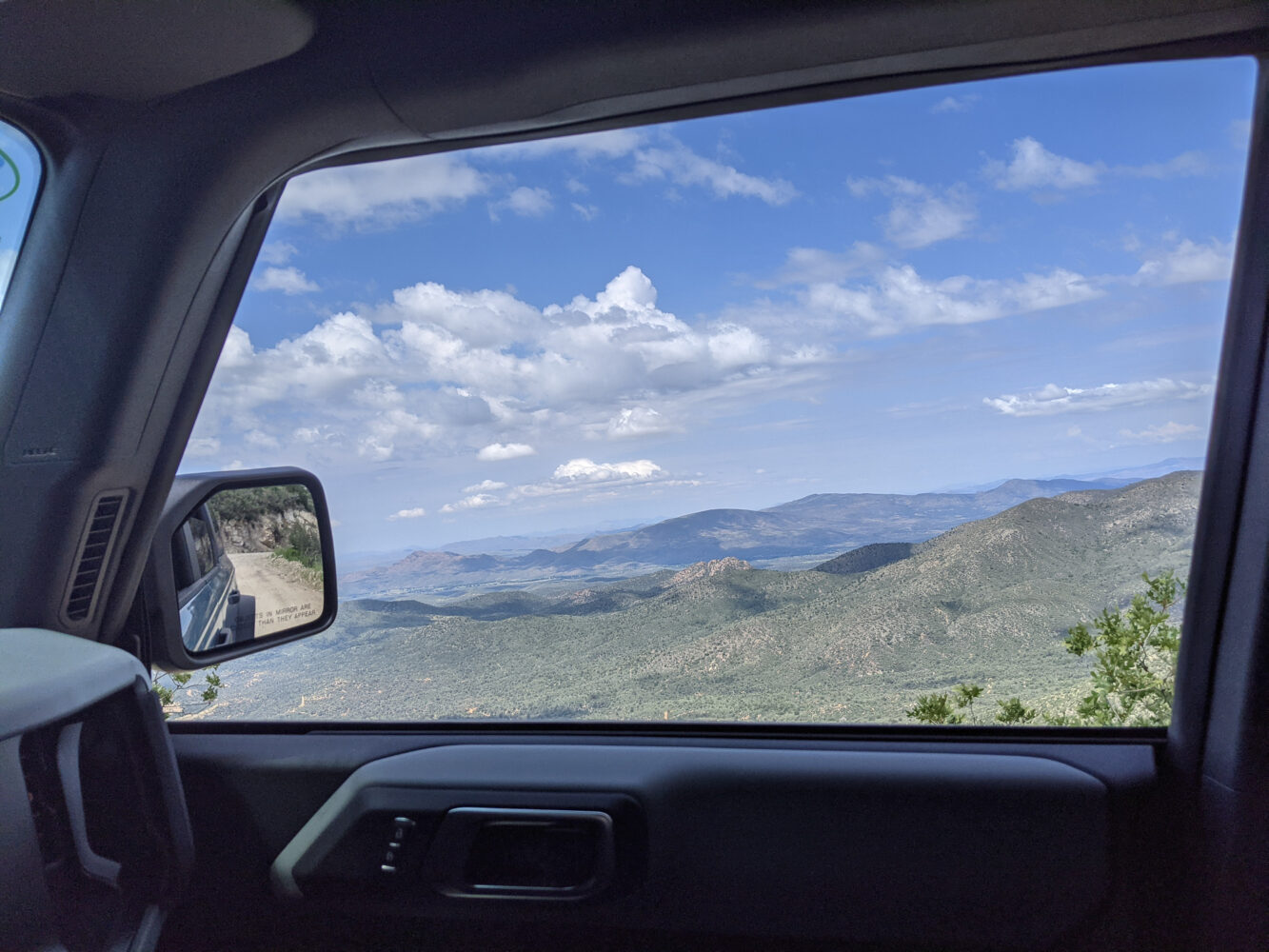 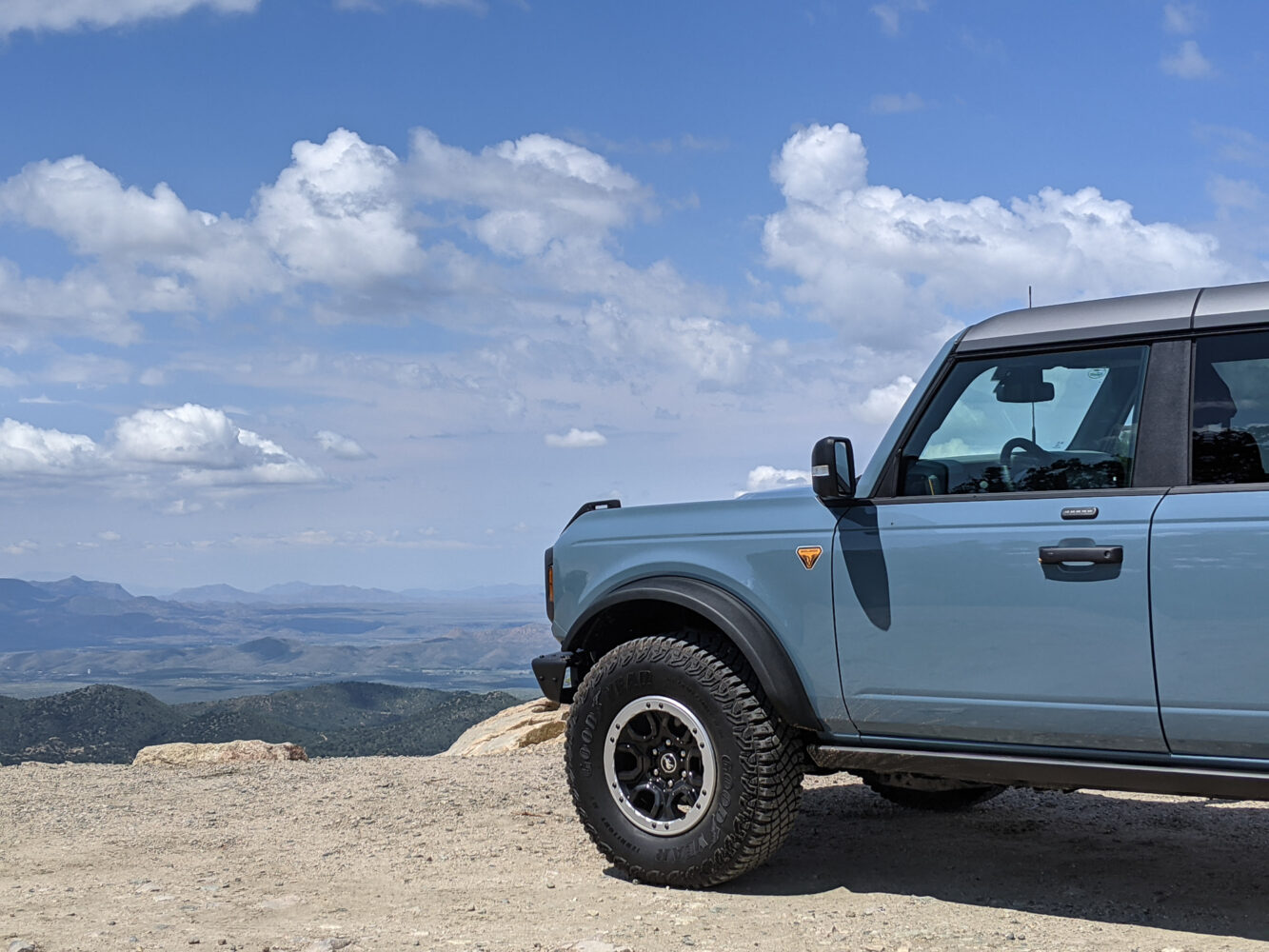 Monsoon season is full-on right now, with record rainfall this year and thunderstorms that come and go as they please. It is often hard to predict when there will be an opening in the weather. Flash floods are a concern, and on Day 2, I found myself on a narrow, lonely track with rushing rivers on either side that seemed to appear in an instant, creeks spontaneously presenting in several spots perpendicular to me. Time to turn around. We (my dog and I) drove out of the rain and found some new trails to hike, a mist hanging heavy on the mountains as we climbed in elevation, thunder booming in the far distance as the clouds began to roll away. 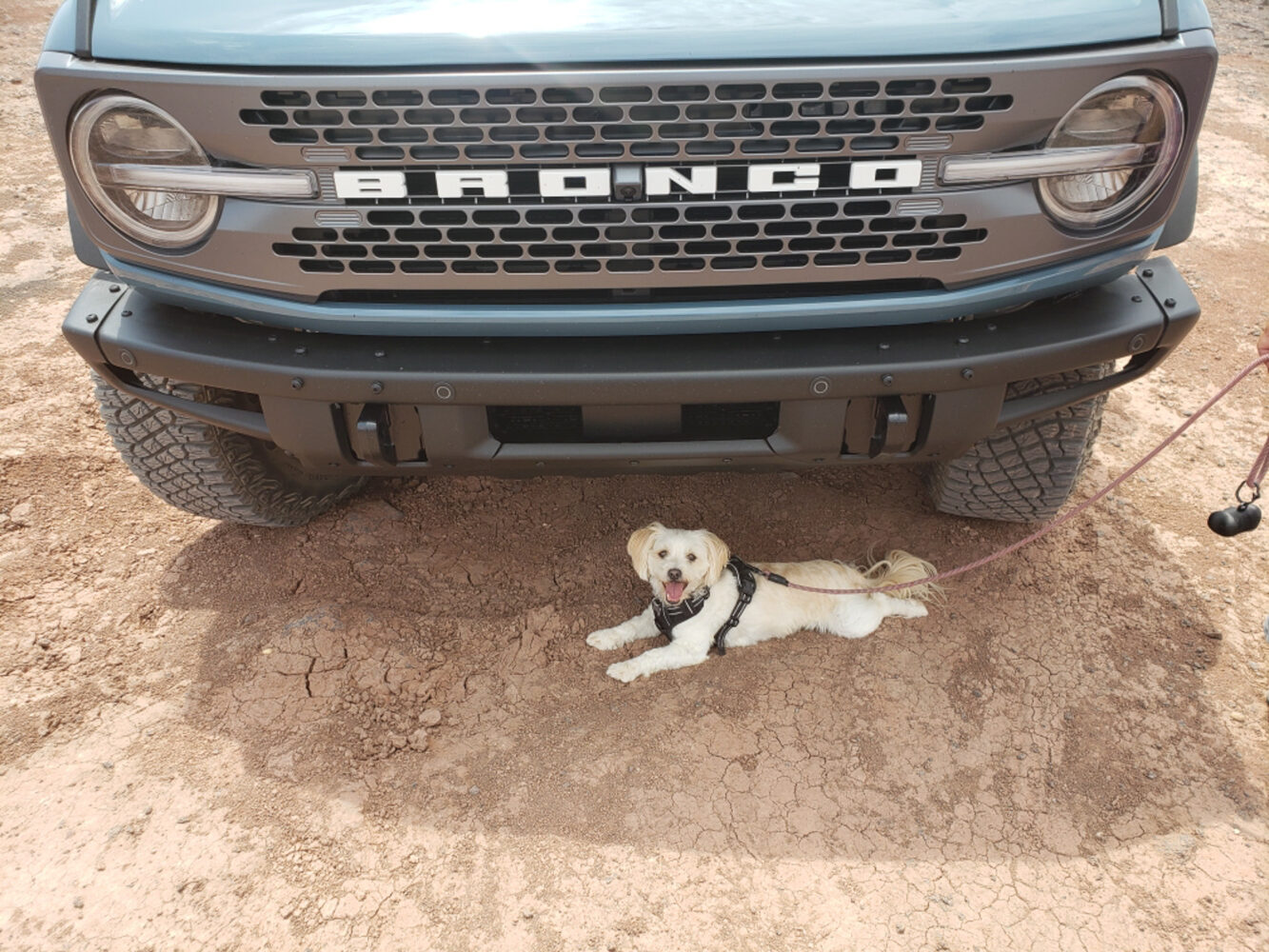 It was a smoldering 98°F in the shade near Leupp, Arizona. Photo by Susan Jimenez

I’d seen the sign for Cherry, Arizona, off of Highway 169 countless times but was always coming or going somewhere else with no time to spare. I did some quick research, plotted a few routes, and set out on Day 3 to explore the ghost town and the surrounding area. A small residential area remains, with folks that are still friendly to strangers, though it is clear they prefer to keep to themselves. Cherry Creek Road is a beautiful scenic drive that pops out on State Route 260, with Verde Valley and views of Sedona’s red rocks an ever-present feast for the eyes. Grief Hill, an old wagon trail, is the perfect place to stretch your legs at the end of the route. If you backtrack through Cherry, there is a trail to Jerome, Arizona, beginning on Federal Mine Road, which then hooks up to a series of forest roads of moderate challenge. 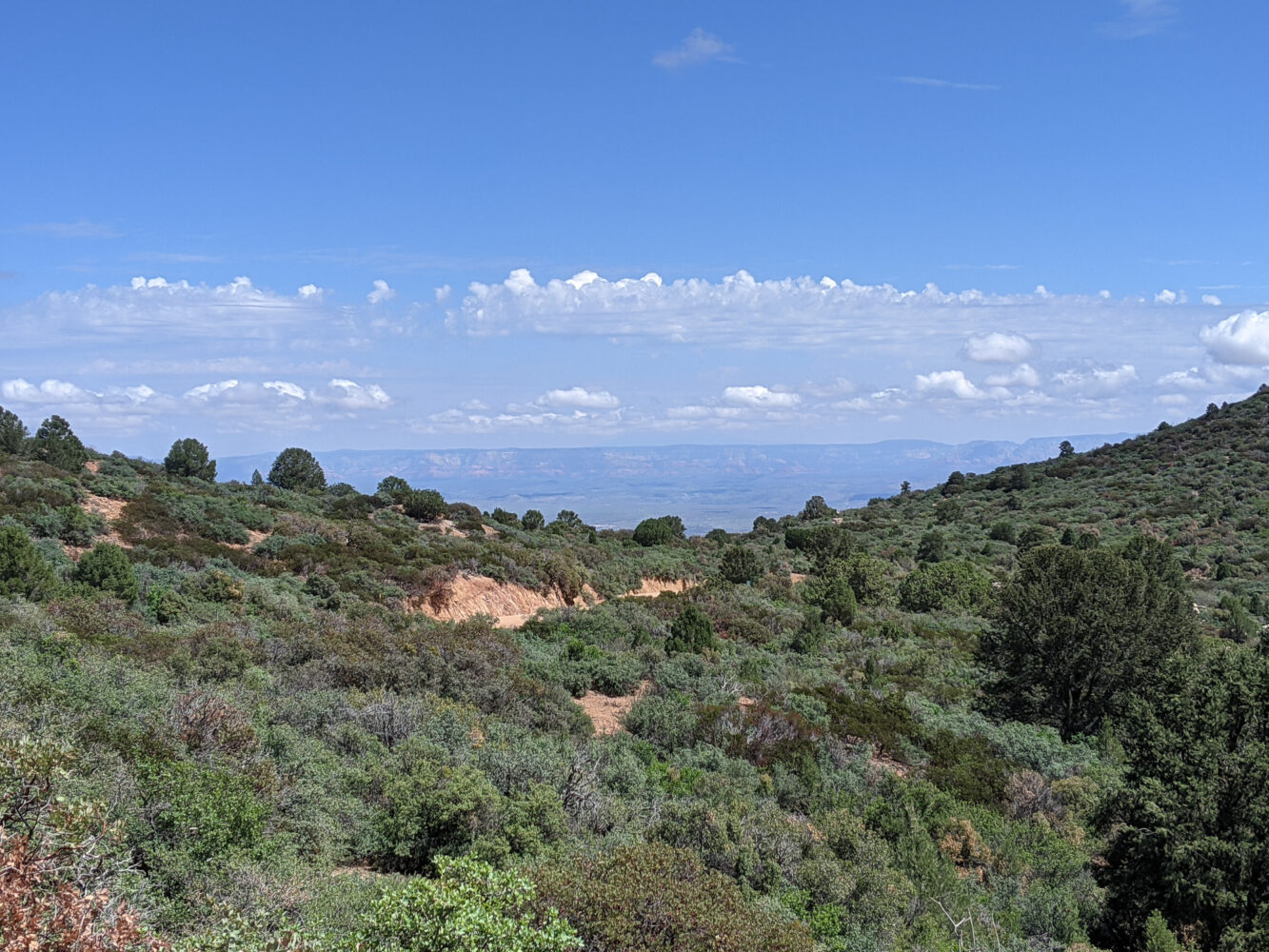 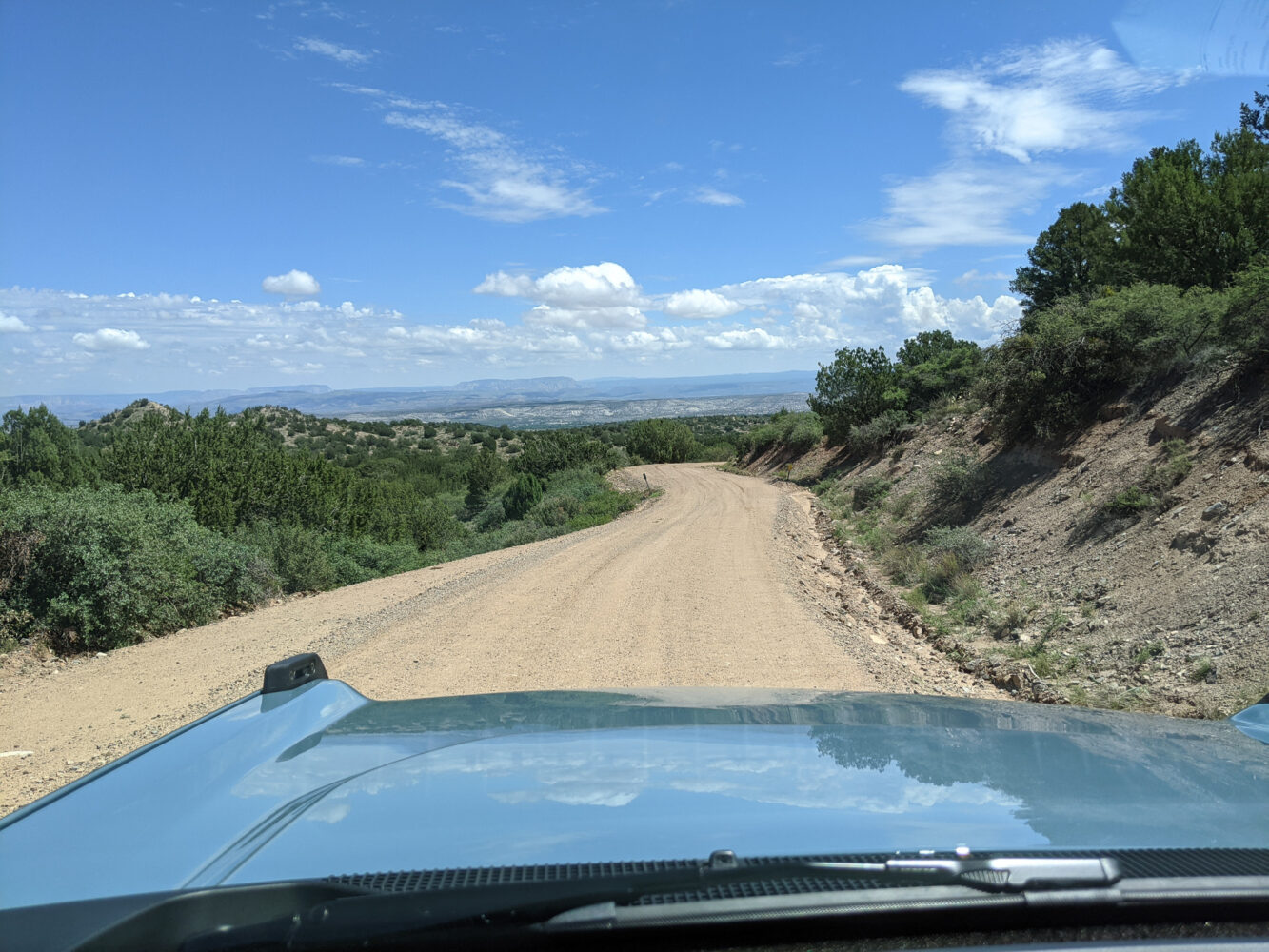 The scenic Cherry Creek Road affords sweeping views and vistas at every turn.

Grand Falls, aka Chocolate Falls, has been a popular destination this summer due to the heavy rains. Located on the Navajo Reservation near Leupp, at 181 feet tall, they are taller than Niagara Falls, with muddy brown waters fed by the Colorado River. They only appear for a short period in spring after snowmelt and, typically, in a shorter window during monsoon. It needs to be in the thousands (discharge of cubic feet per second) to be going full force, but at least 200 CFS to run at all. It changes daily and is somewhat fickle. On Day 4, we caught them on a low day, between 200-300 CFS, making the flavor of the day much more vanilla than chocolate. Nonetheless, after 10 miles of rough washboard, a hike down into the canyon was a suitable reward, standing under the cascading falls—an impossibility when going strong. 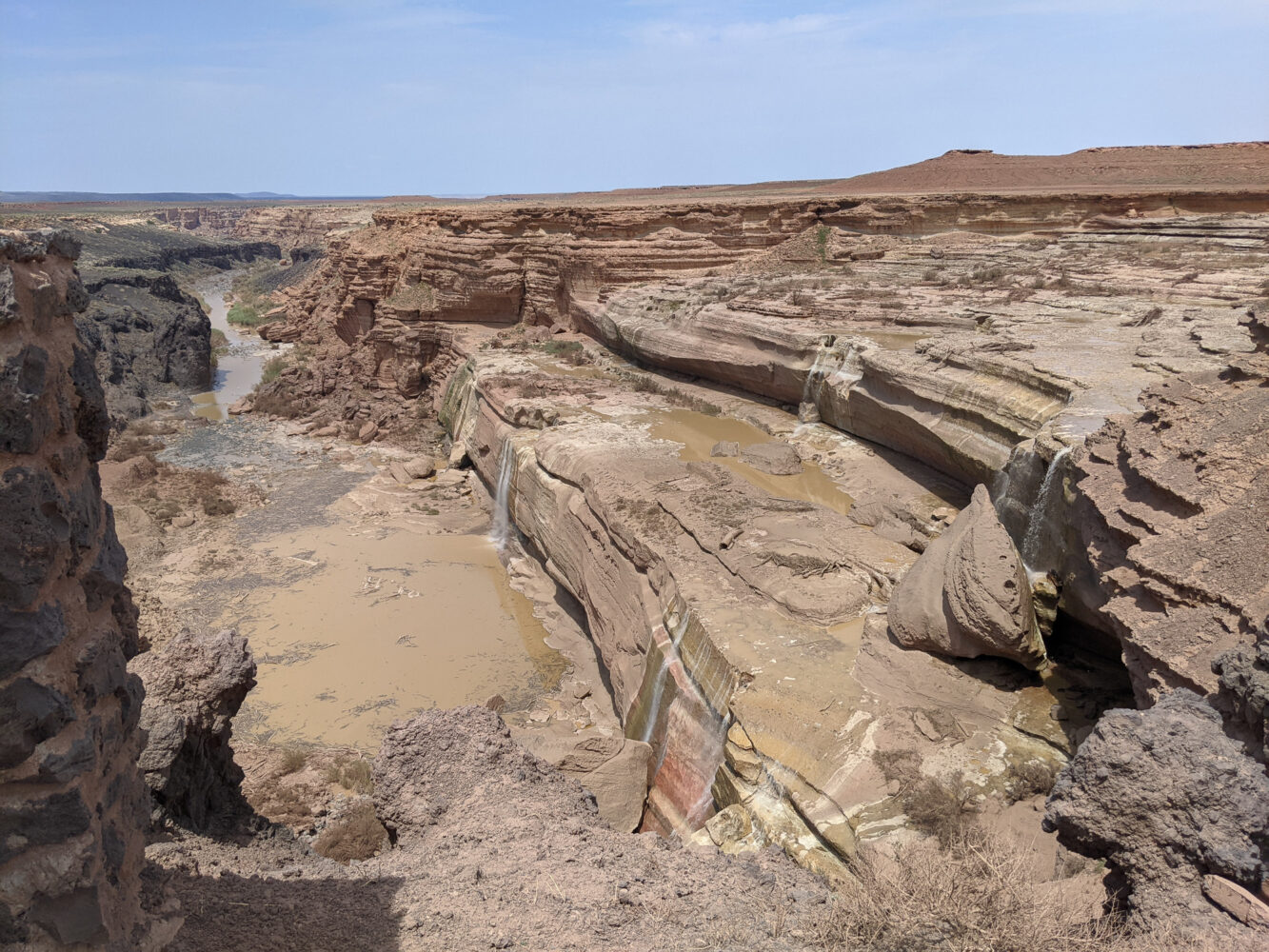 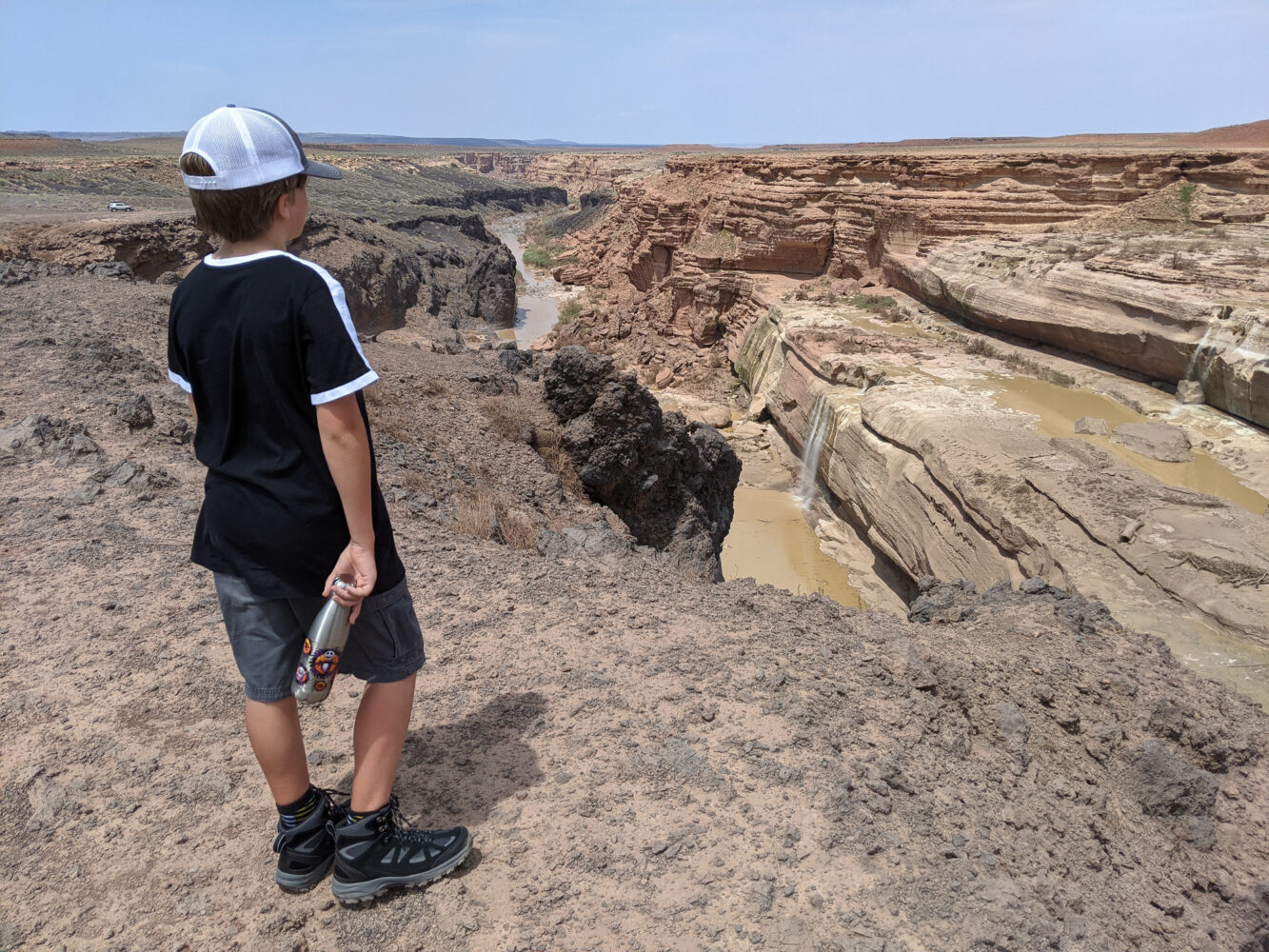 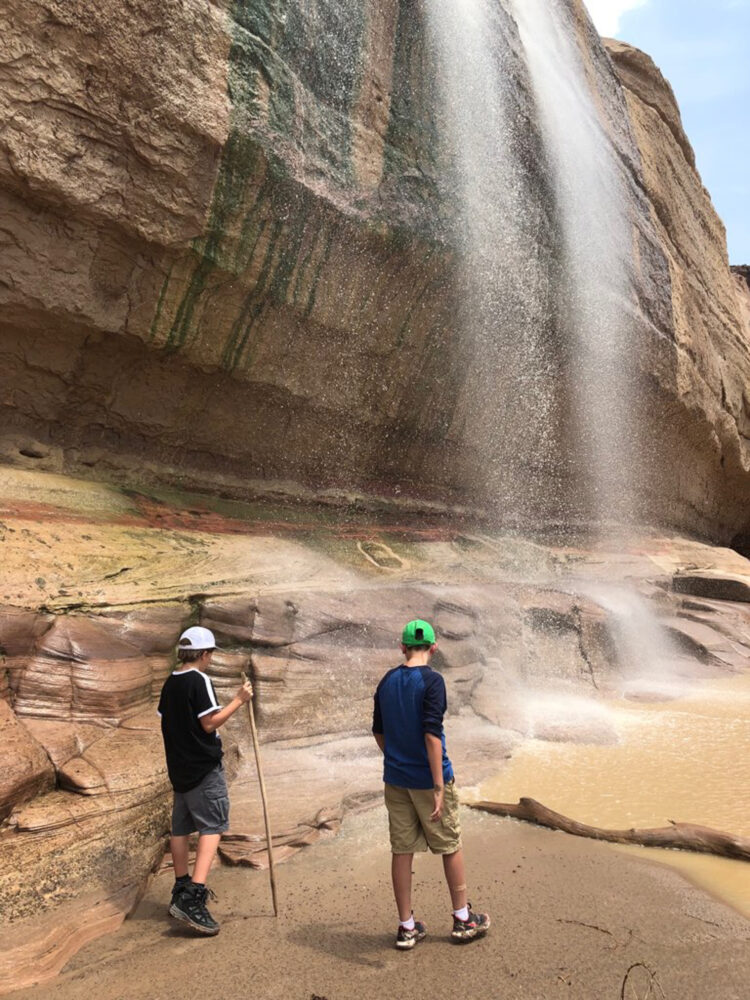 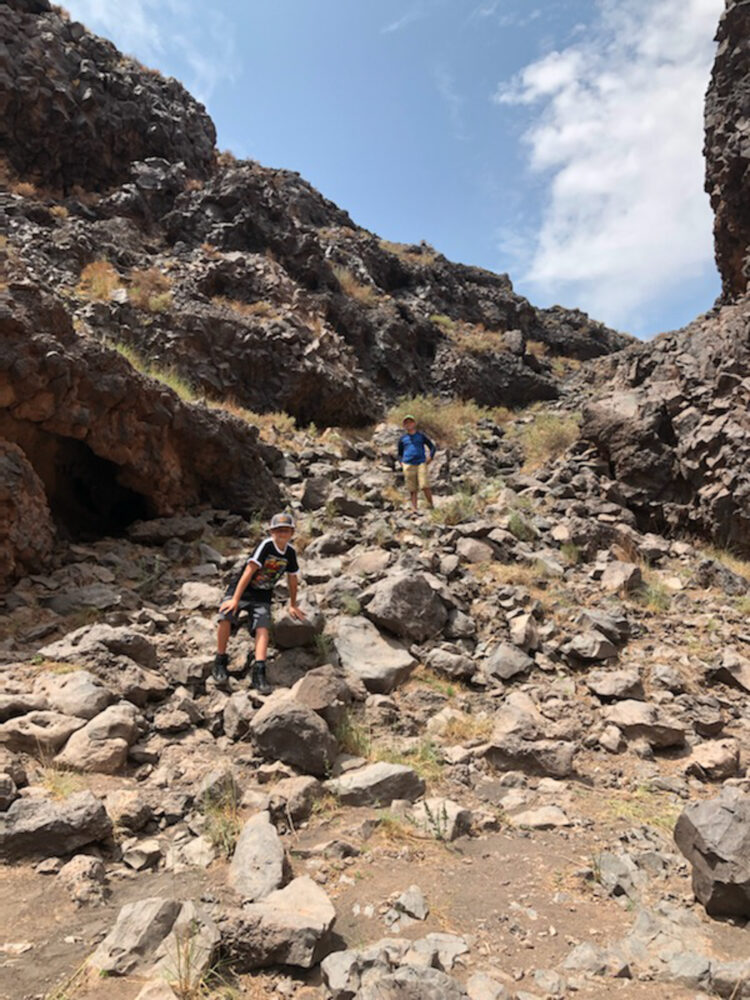 The Grand Falls are a gorgeous spot near Leupp, Arizona, even on “vanilla” days. Bottom two photos by James Llerin

Day 5 found me on more familiar territory, meandering through trails around Wolf Creek, visiting a much smaller-scale waterfall closer to home. I then took the old Senator Highway Road (named for the Senator Mine) halfway to Crown King through the ponderosa pine. The popular trail was rutted out a bit more than usual, again, due to the rain, which seemed to attract more visitors. I was happy with my halfway point and hightailed it back to Prescott, thunder clouds again looming on the horizon. 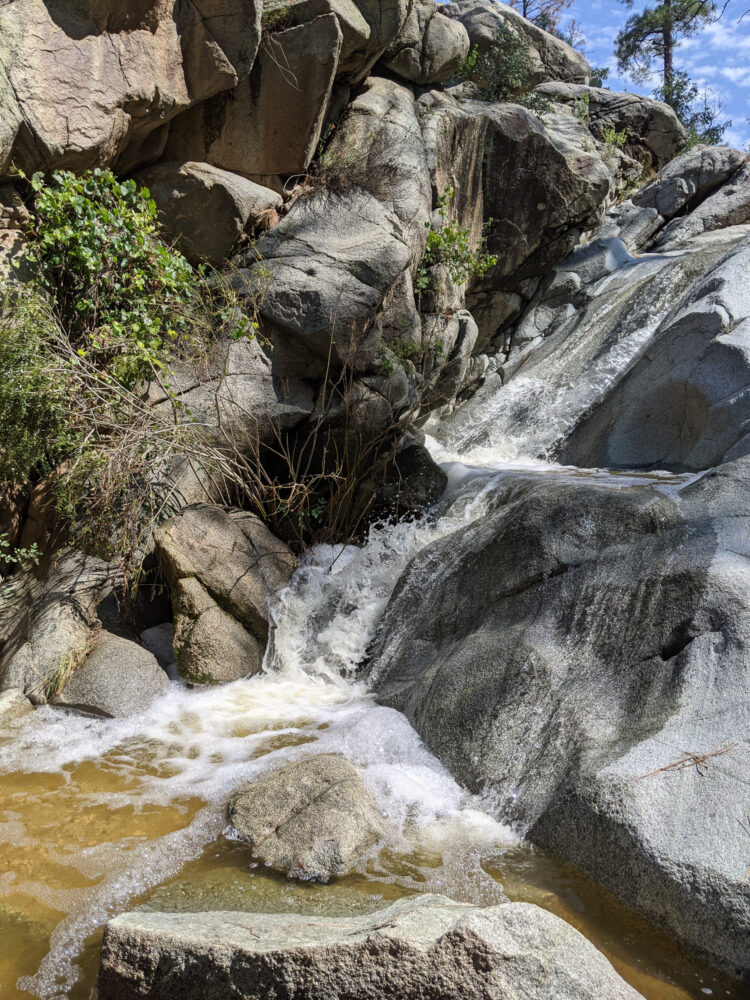 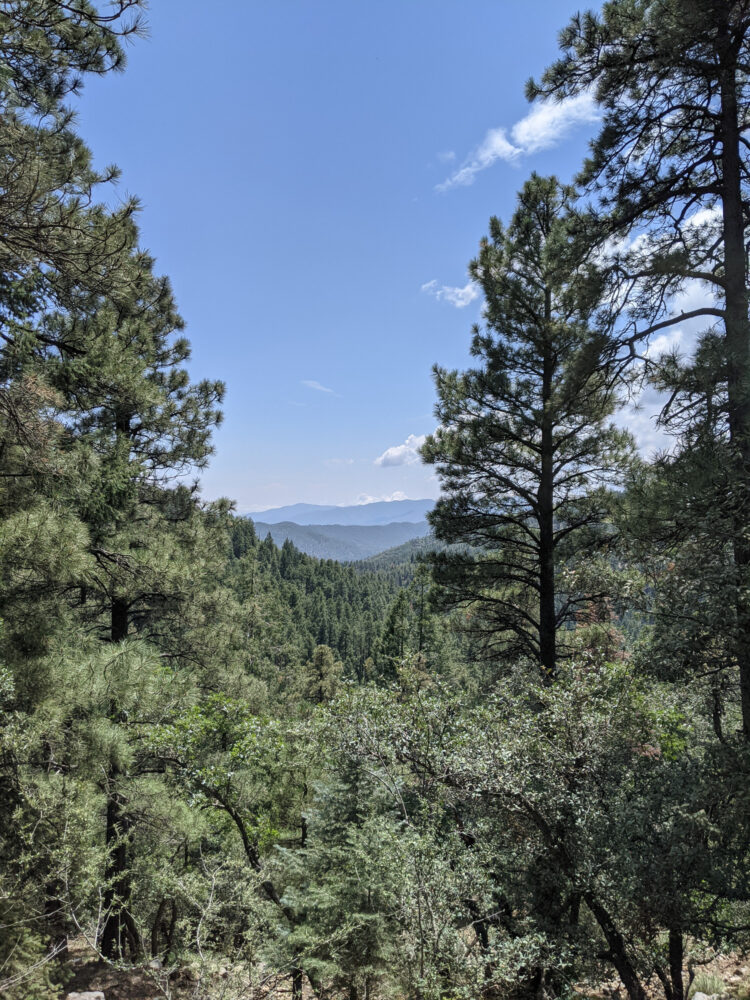 No relationship is perfect. Today, my 5-foot, 3-inch frame still struggles when “hopping in” the Bronco. The seal of the hardtop is not airtight, which resulted in significant wind noise (whistling) at speeds as low as 35 mph if the crosswind was just right. At 60-70 mph, a friend remarked that it is “tea time” all the time in the Bronco. I found the touch screen to be often hot to the touch, enough so to start checking for problems on the panel (there were none).

I knew the Badlands was due for video coverage with other members of the Overland International team the day after I returned it and planned accordingly. I prepped it with a sprayer to remove excess dirt and mud. This was followed by a fancy carwash, which did nothing— admittedly, perhaps not the Bronco’s fault. It took significant effort to remove the muddy water spots off of the plastic trim, and after a few hours of hard work of handwashing and detailing in my driveway, I called it a day, with light spots still showing.

But therein lies the end of any faults I could find. This tank on wheels goes from 0-warp speed in a heartbeat, with pickup that is both responsive and immediate. There is a curious effect in that it feels like you are going faster than you actually are; perhaps it has something to do with the incredibly smooth ride and suspension. The interior is a breeze to clean. The vinyl seats quickly wiped free of dirt (the plastic seat sweat is totally worth it), and the stay-put floor mats rinse and drain with ease. The generations have been kind to the Bronco from a comfort perspective, and the front and back seats were both supportive and well contoured. Unfortunately (or not), jump seats are a thing of the past. The cameras in the Bronco are phenomenal, the side and front terrain ones in particular. Most important of all is that it feels like you can do anything in the Badlands; I never questioned it.

It is true that 90 percent of the terrain I drove could have been done in my Subaru Forester, some tasks with more significant effort than others. However, it was a pleasure to drive something so clearly made for the off-pavement lifestyle, and frankly, so easy to drive. While it was possible to go old school and engage features manually with the flip of a few switches, the G.O.A.T (goes over any terrain) driving modes allow you to vacillate at will between Normal, Eco, Slippery, Sand, Mud/Ruts, Rock Crawl, and Baja with the turn of a dial. It’s simple enough for my 11-year old to operate (he didn’t; we didn’t go that old school) but may take the fun out of it for some. Eco mode brought my gas mileage up to a respectable 18 mpg within a short time frame (it was averaging 14 mph when I acquired the vehicle), and I found myself frequently engaging both Mud/Ruts and Rock Crawl. The Bronco handled like a dream, no matter what I threw at it.

Sadly, we had to part ways after five days of unbridled horseplay. But what a ride it was. Until we meet again, Bronco Badlands—I’ll be waiting.

Readers, keep an eye out on Expedition Portal for both video footage and a podcast further detailing the features of this 2021 Bronco Badlands, likely in early September.

A steadfast believer in the power of words, Tena can usually be found with her eyes turned toward some source of written knowledge, be it for pleasure (seeking details on her next adventure), sustenance (recipe or menu), or just because. Recognizing the value of spoken word as well (unless it is coming from her GPS, in which case, she is perfectly capable of getting lost on her own), Tena finds there is no substitute for confabulation. Refuge from the monotony of the everyday is found by immersing herself in her surroundings, whether in an exotic locale or her own backyard. Disconnecting from technology is one of Tena’s favorite things, and seeking solace in the great outdoors is a cure well taken.