We received ours last week so we broke it in with some pollo asada. We'll use it at home as much as possible to get the seasoning built up. Now just need to find a spot for it in the camper van. 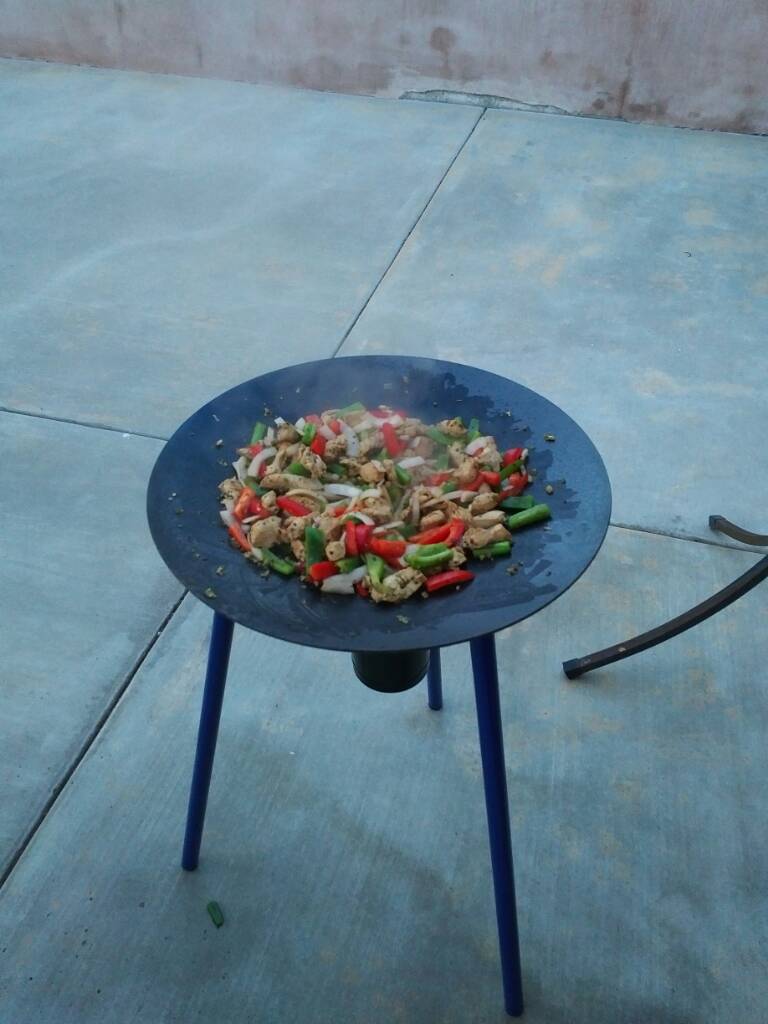 Sent from my STV100-1 using Tapatalk

odomandr said:
would this work with the whisperlite stove from msr?
Click to expand...

Yes!!! I have designed an adapter for the MSR Wisperlite stove. Check the pictures below. The adapter will allow the Whisperlite to attched to the bottom of the Adventure Skottle grill.

spoolup said:
Thanks Jerry for the quick shipping on my Skottle. You beat amazon prime by a few hours since I bought the burner there, but MAN is this thing awesome. Made up some disco egg fry sandwich's for breakfast this morning on it. Girlfriend was defiantly a fan. I should have taken photos of it cooking but I know Ill have a chance to do it again next weekend. Incase anyone is curious.

Heat oil in center of skillet. Toss in a good pinch of chopped cilantro. Then crack in 2 eggs. Don't scramble, just break yokes with turner/ spatula. Toss on some chopped green onion. Spice with ground coriander, yellow mustard seed, chili powder of choice (I used chipolte powder), Garam marsala, salt and pepper. Top with 2 split dinner/ water rolls, then season bread the same as the eggs. drizzle with oil, flip and smash into pan. I just used the turner bottom and pressed with hand. But a potato smasher works awesome too (how I make it in the house), just less to clean using the same utensil for everything when backcountry... flip again a minute later, flip again, and score against roll lines, fold and serve. Amazing taste, very filling, and quick.

Here is a youtube video of them being made by street vendors in India.

And one of my fav Indian youtube cooks, madhura

My end result, my daughter grabbed one of the sections as soon as it was plated, she loves these. 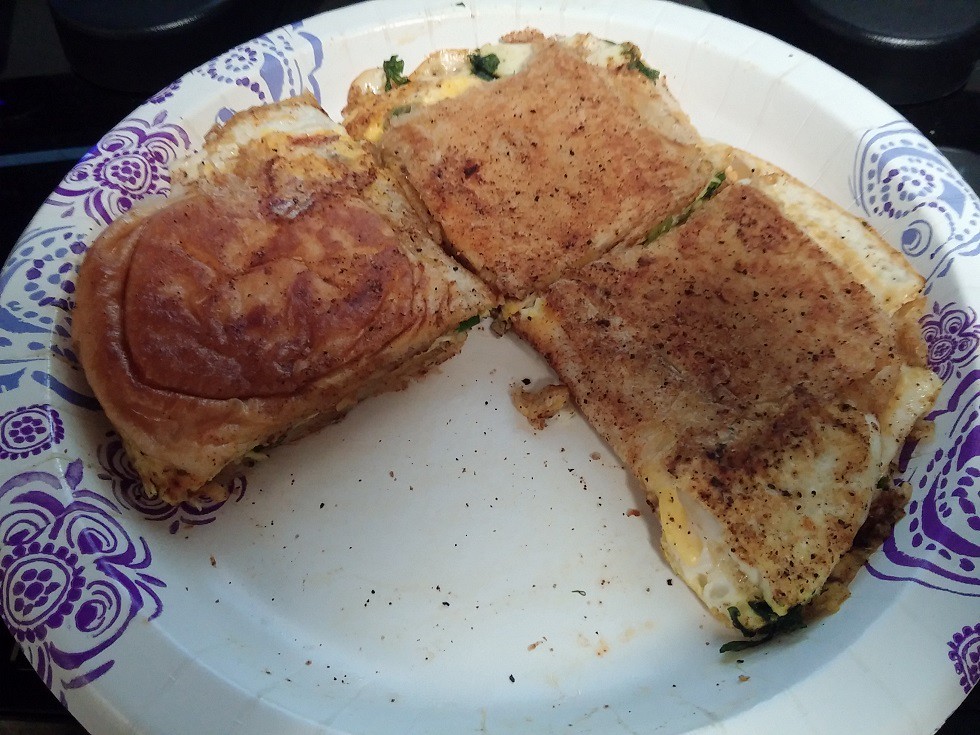 Wanting to make these was a big part of wanting a Skottle. I've done a few so far and I'm getting better. Have a few more ingredients on the way to try out some different things. Loving these egg fry's!

Sent from my STV100-1 using Tapatalk

Has anyone flown with an adventure skottle? Wondering if there were any issues with TSA. I think the legs on the full size are the only potential deal breaker. Thinking the smaller one might be ok as a carry on.

ab1985 said:
Has anyone flown with an adventure skottle? Wondering if there were any issues with TSA. I think the legs on the full size are the only potential deal breaker. Thinking the smaller one might be ok as a carry on.
Click to expand...

I have just returned from France and I carred the Adventure Skottle in my luggage. I did not take it as carry on, although I don't think it would have been a big issue. The long legs of the regular Skottle would not work as carry on.

I have been using my full size Skottle at home since spring of last year, and for camping.
I recently picked up the smaller Adventure one to take camping to save room in the rig, plus it will hold enough grub for two.
Used the full size one yesterday, here is a short video of it.

Vegan Dinner Cooked On The Skottle

Since using the Skottle I have dropped quite a few pounds, as I am using all organic vegetables, and vegan meat substitutes like Tofurkey sausages, and as in this video, Gardein Teyeraki vegan Chicken Strips.
I can eat as much of this and not gain any weight.
On the Skottle:
O Organic olive oil
Gardein Chicken Strips
Three Roma tomatoes
1.5 sweet yellow onions sliced up
One pack of brown mushrooms halved, One pack of portobello mushrooms
One red and on orange bell peppers sliced up
Slap Ya Mama black pepper Cajun blend seasoning

I cook up a big batch so I have leftovers for a few days at work too.

TemboTusk said:
Yes!!! I have designed an adapter for the MSR Wisperlite stove. Check the pictures below. The adapter will allow the Whisperlite to attched to the bottom of the Adventure Skottle grill.

What is the reason for the higher price on the adventure skottle vs the standard?

odomandr said:
What is the reason for the higher price on the adventure skottle vs the standard?
Click to expand...

We now have a kit that makes both the standard and Adventure Skottle the same price. They both cost about the same to manufacture, so the price is not different. However, depending on which stove you choose (if it is not the KIT) , will push the cost much higher. I don't have much control over the stove prices.

I guess I am wondering why he basic skottle is 185 and the basic adventure skottle is 260 what am I missing there? neither have a stove

odomandr said:
I guess I am wondering why he basic skottle is 185 and the basic adventure skottle is 260 what am I missing there? neither have a stove
Click to expand...

You are trying to compair apples and oranges. Revew what is and is not included.

I've made two modifications to my Tembo Tusk skottle:

1) Removed the threads on the first half of the eye bolts so I only need to twist them a few times to mount the burner at its highest position against the skottle.

2) Created a drop-down mounting configuration so I can cook at very low heat when necessary. The drop down mounting can use one spacer, two spacers, or none at all. 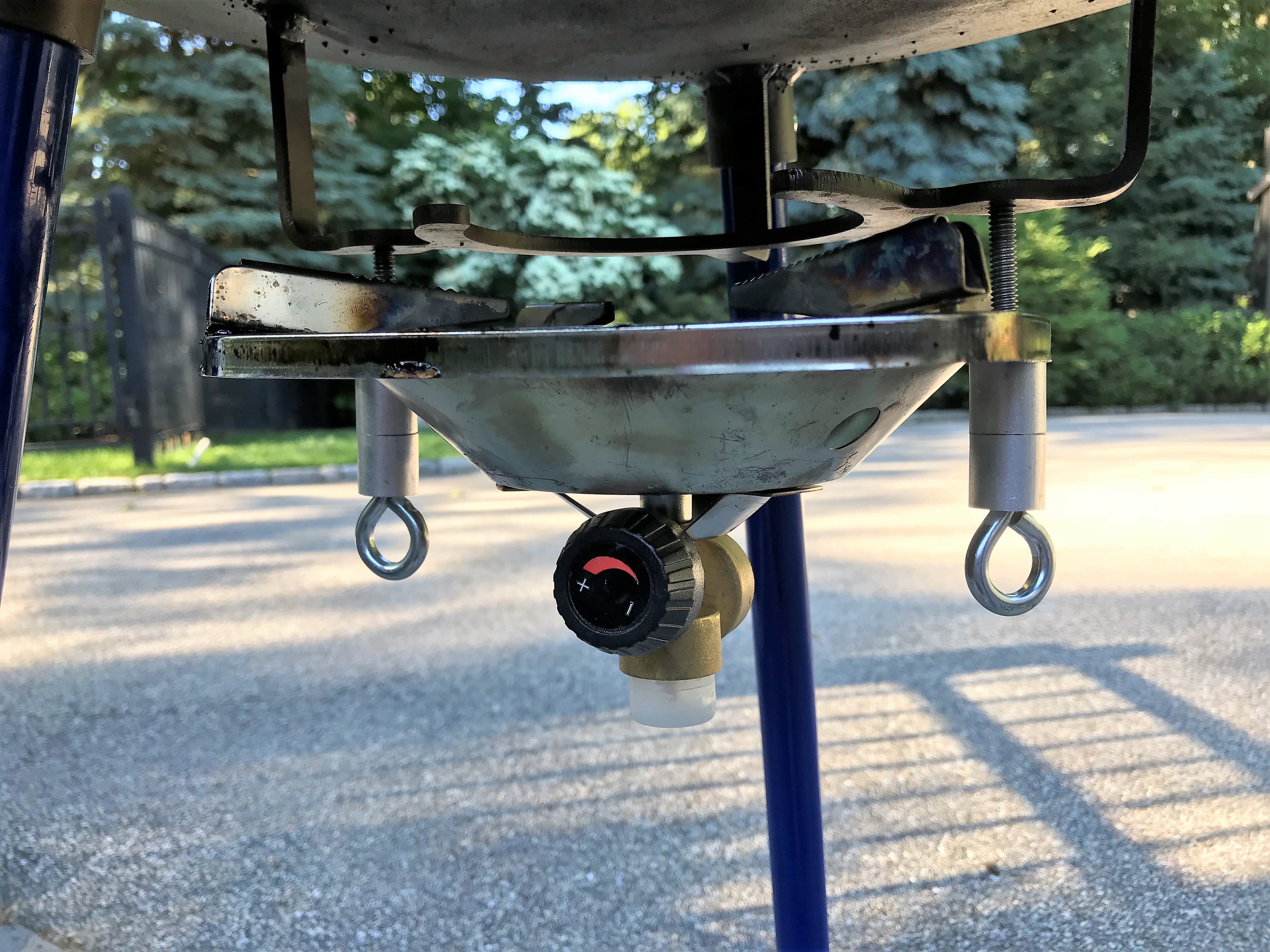 Two good ideas MattJ ! Another low power idea is to let the burner just sit in the stove cage, no eyebolts holding it. It will lower the burner about one inch below the pan.

Speaking of modifications, I made our Skottle even more compact - 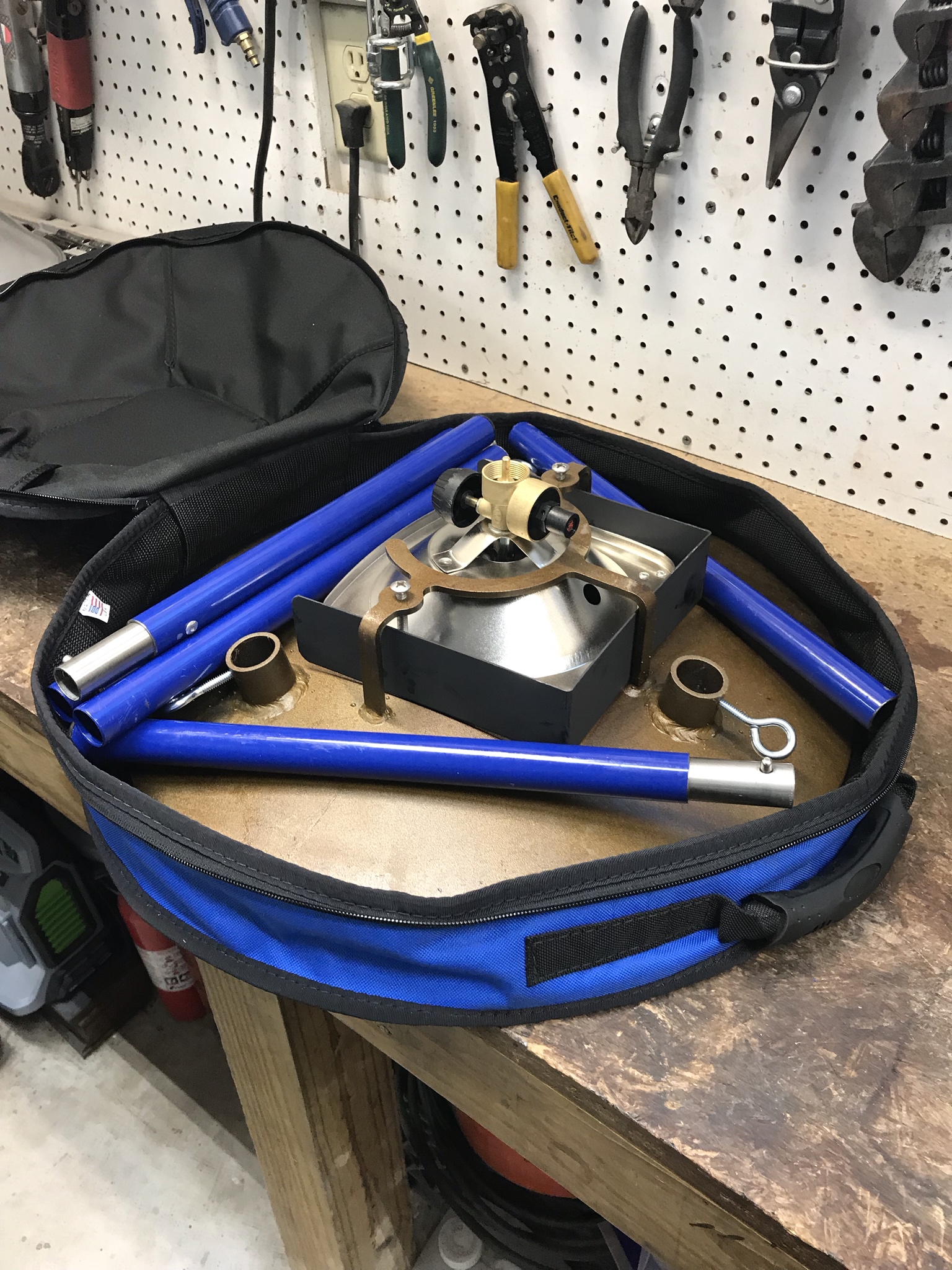 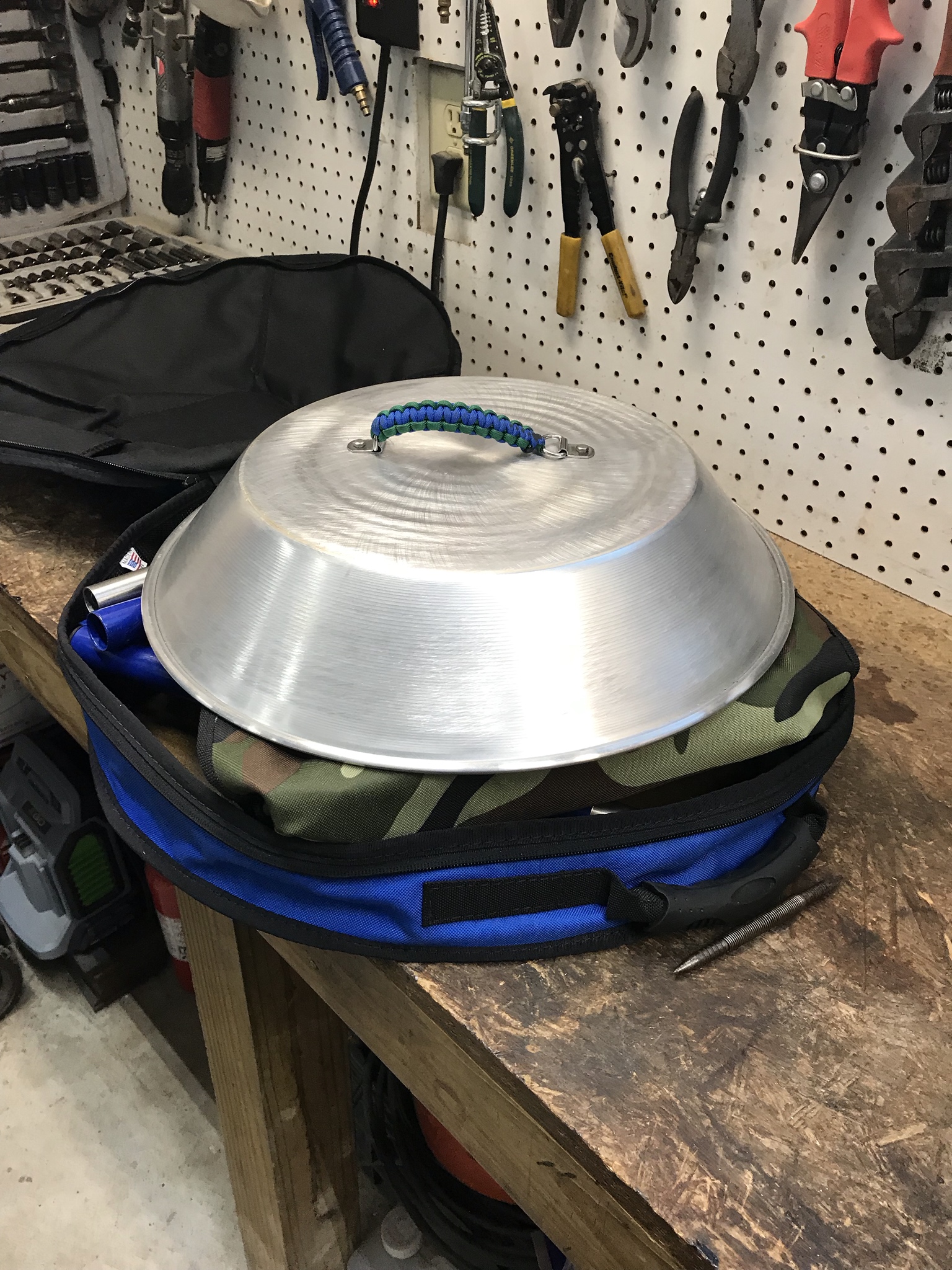 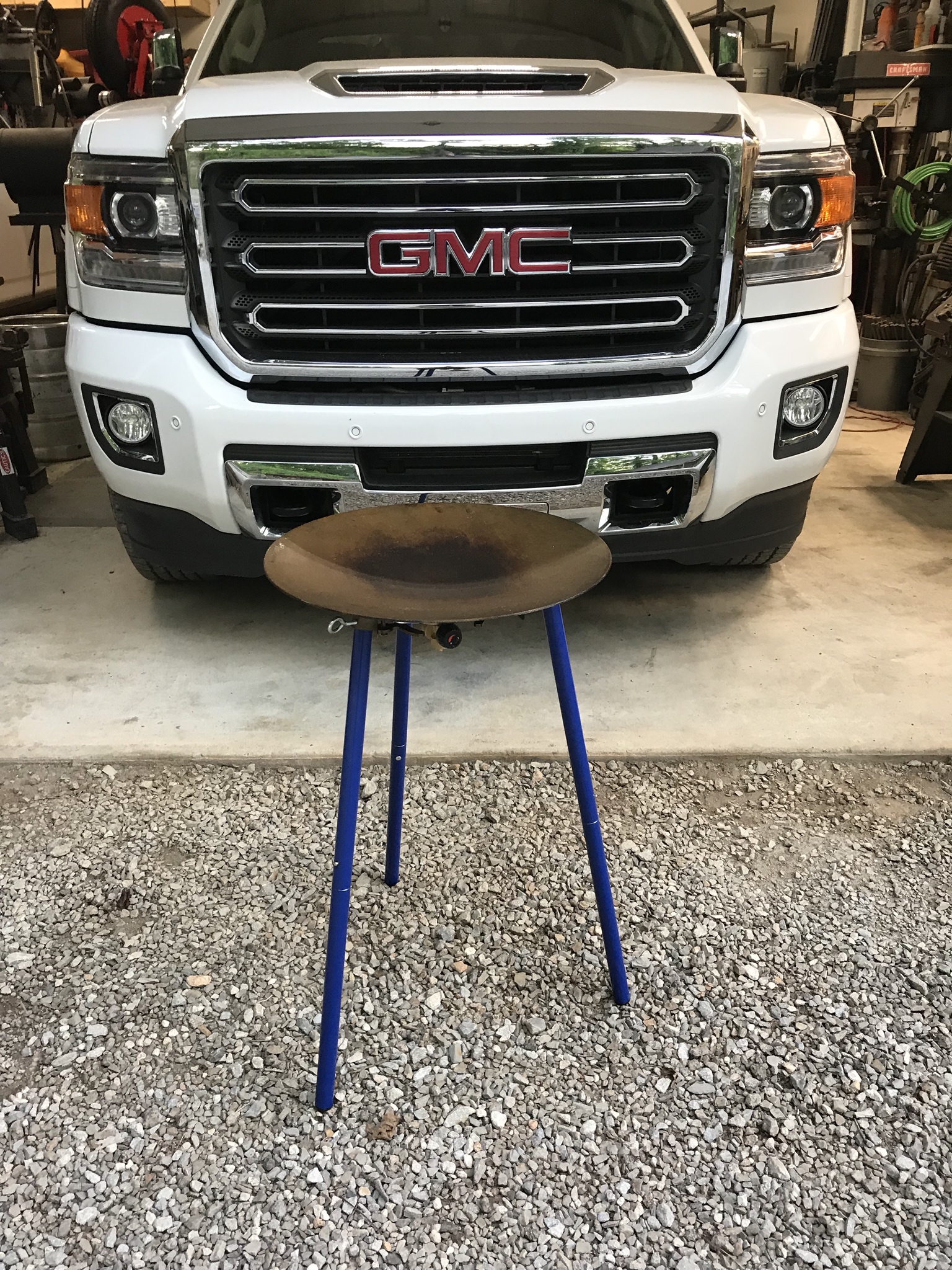 That's a great idea on the legs. Any details you can share? I was going to make a set of shorter legs so I can take mine on a plane. I may need to look into something like this.