Dkman71 said:
Ok I give. Old post, but how is the heater attached to the aluminum plate? I can’t see a damn thing with the red hue to everything.
Click to expand...

Sorry that the red hue rattles you so much. There are 2 bolts threaded through the plate that the heater hangs from. If you look on the back of the heater there are 2 keyhole slots.
F

OnBeechRoad said:
Sorry that the red hue rattles you so much. There are 2 bolts threaded through the plate that the heater hangs from. If you look on the back of the heater there are 2 keyhole slots.
Click to expand...

i was bored so here's some color manipulation:

thats pretty cool, thanks for sharing that

The Essential Guide to Overland Travel in the United Stat...
by TeriAnn Wakeman
From $64.95

Just finished a big upgrade to the rig, including the RTT setup. By far the biggest improvement I've made is adding two decks. The one off the back can be covered with an umbrella in seconds, and features two boat seats on quick release mounts. The one off the side consists of a piece of plywood that sits on a tube steel frame that telescopes out / cantilevers from the tube steel frame supporting the RTT. I added ladder supports to each side of the smaller deck. This makes it much easier to access and exit the tent: Instead of backing onto the ladder, you can easily move from sitting on the large deck to descending the ladder, and from ascending to sitting. I can only assume liability issues prevent RTT manufacturers from adding decks, because they are awesome. Another major upgrade was in the security department. The Baroud mounting system is a joke. So when building the frame for the RTT I welded in steel tubes around the bolts, and used tamper proof nuts. Sure, you could still steal my tent. But your average tweeker just isn't going to bother. And criminal masterminds / planners probably have better things to do.

I like the idea of a deck/balcony. For years I've thought about putting an LOD sliding roof rack over a roof top tent so it can be a balcony when the tent is open. 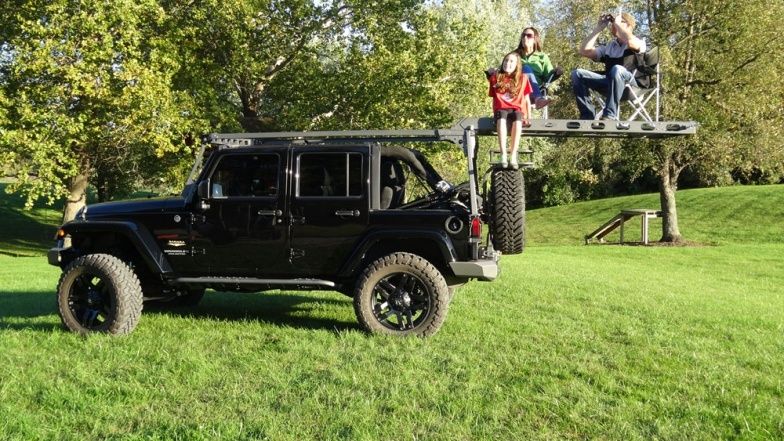 My implementation definitely turned out a little clunky. The LOD rack looks like a good way to do it. Another way to do it would be with a GFC style wedge camper, but maybe make the side and back panels overlap the bed when closed, make them out of something sturdy enough to be a deck when open, then just have some beefy diagonal struts that lock them in the open position...seems it would be fairly easy for manufacturers to turn the side panels into decks with this style of camper, although there would be details to figure out (like do you need double panels so you can lock up with the deck deployed.
B

I truly feel the Columbus Variant is one of the best built tents on the market. However, the one thing it needs is power. AND, now power it has. Sadly, not from the factory, but from a little DIY.

Run power up to the tent using a semi-prototype method. I just grab a cable and plug it into an Anderson Power Pole plug I have in the rear of the jeep. Running it under the lift glass is easy. Later I'll install a drilled permanent passthrough in the body of the tent floor. Probably using the Aqua Signal

For now the manual method works. The 14awg wiring has a full braided loom from end to end. Routing is under the mattress to the front two corners. Along the way, it runs to BlueSea USB ports, and terminates at the beginning of a 16' strip of and RBB LED strip.

EDIT for USB install:
I forgot to mention that I did not want to drill into the top or drop the header to install the USBs. Instead, I bought the ARB housing and some 1/8" hard plastic sheeting. I cut the sheeting to the outline of the bottom of the ARB housing. Then used velcro hook on that plastic sheeting. The cutout was drilled with #8 flatheads on the back. After hooking up the USB ports, the backing was attached using the #8 flatheads and some Acorn nuts. Pressing the hook velcro into the top firmly you will get a rock solid grip on the headliner. These will not come off unless you intentionally remove them. Of note, make sure you put them where you want the first time, or you will ruff up the fabric.

The main reason for the power was the lights. The one supplied by Autohome, although adequate, was inconvenient to access....especially if you sleep with your head on the hinge end.

The LED hardware was purchased from SuperBrightleds.com. Wanting either person to be able to operate the lights while lying down, I did not want to use a switch on just one side. This lead to acquiring an RBG remote controller.

I just clipped the connectors off of this one and soldered the wires to the power and LED contacts. Again all of this was hidden under the mattress in the corner of the tent floor full wrapped in braided sleeve.

The led strip was adhered to hook velcro and ran on from one corner to the other along the top perimeter of the tent excluding the hinge side. So now I have lights on 3 sides and the lighting is perfect.

The best thing about the new LEDs is being able to switch to RED on lowest brightness before turning them off. The memory of last setting stays, and when you need to make a night time Bio-break the low red glow is just enough to see everything but does not hurt your eyes or wake up your wife.

The colors are nice, but I really like the Warm White on medium brightness for general reading. However, if you want, you can go full party mode like my dog did when I was not looking.

From my dog: "The boy just installed these LEDs in my Roof Top Dog house, I mean Autohome. I like the red for when I have to go potty at night. But I have all the party colors for when the pack drops by."

Wilhnt4 said:
I have a James Baroud Explorer RTT and would like a cover for it. I store the trailer it's on outside and was hoping someone knows of a company that makes or can make a cover. I use a tarp now but it would be nice to have something that fits well and doesn't have to have a bunch of rope/straps holding it on.

Were you ever able to find a solution here?

Would like something to cover my Maggiolina with when the car's parked outside. Ideally something stretchy like a tiny car cover?
W

riffman12 said:
Were you ever able to find a solution here?

Nothing yet but I haven’t put much effort into looking. I think I’ll have to have something custom made.
H

Since Smittybilt does not offer an anti condensation mat and I could use a little more padding I installed several Thermarest sleeping pads today. Hopefully they add a little more cushion and help with moisture. Or else I wasted a hundred dollars.

Halligan said:
Since Smittybilt does not offer an anti condensation mat and I could use a little more padding I installed several Thermarest sleeping pads today. Hopefully they add a little more cushion and help with moisture. Or else I wasted a hundred dollars.
Click to expand...

Love to hear how you are getting on with these. Condensation is one of the things we need to tackle in our RTT.

Dreaming of Jupiter
by Ted Simon
From $16.04

Kiwi_Ed said:
Love to hear how you are getting on with these. Condensation is one of the things we need to tackle in our RTT.
Click to expand...

I’m heading out next week for a few nights so I’ll keep you posted.

Just finished reading through this great topic with lots of new ideas to do (and money to spend on improvements..), thanks all for your contributions.

I am wondering if any of you have any tips or hacks on how to load and unload your RTT easily.
My wife isn't as strong as she used to be and lately we have fierce trouble lifting the tent on our car.