Big changes. Good choice on the Touareg. I've owned a 2011 Touareg TDI (bought back for dieselgate) and a 2013 Touareg TDI and loved both of them. Towed a race car to and from race tracks all over CA multiple times without issue and even towed a car back from MN on a 56 hour, non-stop, trip (CA->MN->CA) and the Touareg peformed flawlessly, averaging 70-80mph for most of the towing portion. Only reason I sold the second one was the depreciation curve. I can see myself owning another one once the pricing bottoms out. I never drove the VR6 version but they make a lot of sense, especially when comparing the long term maintenance of all the engine options.

As a Californian constantly considering a move to Utah or Colorado, what prompted the move and how are you liking it, compared to CA?
S

DailyDSM said:
Big changes. Good choice on the Touareg. I've owned a 2011 Touareg TDI (bought back for dieselgate) and a 2013 Touareg TDI and loved both of them. Towed a race car to and from race tracks all over CA multiple times without issue and even towed a car back from MN on a 56 hour, non-stop, trip (CA->MN->CA) and the Touareg peformed flawlessly, averaging 70-80mph for most of the towing portion. Only reason I sold the second one was the depreciation curve. I can see myself owning another one once the pricing bottoms out. I never drove the VR6 version but they make a lot of sense, especially when comparing the long term maintenance of all the engine options.

As a Californian constantly considering a move to Utah or Colorado, what prompted the move and how are you liking it, compared to CA?
Click to expand...

Great to hear, I'm loving ours so far! Seems to burn a little oil, but coming from a couple of mitsubishis and a turbo mazda I'm not sweating at all haha.

I actually was considering both Utah and Colorado as well! Ultimately it boiled down to
1) a lot of family has been moving to Colorado over the last 5-6 years and it's also an area that my parents were looking to retire in
2) I'm a wannabe ski bum and that's just my absolute favorite thing to do so definitely a big opportunity there
3) In my field (dentistry) there are just a lot more opportunities for new dentists and higher pay as well. CA is very saturated and it's not uncommon for a new dentist to make sub 6 figures whereas out here I'm starting at a healthy 6 figure amount with benefits. Also income tax is only like 4.6% or something like that. Even sales tax is only like 2 something%. More money in my pocket.
4) After living in TN for 3 years and moving back to CA I really noticed how different the lifestyle is. In TN everyone is more laidback and it's just an overall slower pace of life. People are happier and more friendly to strangers. CO and UT aren't quite the same, but more towards that spectrum than the typical Californian always gotta be somewhere doing something and whatever I want I want it now kind of mentality.
5) And then finally the raising a family aspect. CA just isn't as nice and safe as it used to be when I was growing up and ya know, I want the best for my future kids.
6) I want some land with hills and big pine trees and snow in the winter

And then there's all the obvious things like getting 4 seasons and it's not so blazing hot and whatnot.

If I didn't have all the family out here, I might have chosen UT instead just because we always vacationed there growing up and it's very sentimental.


Anyways....so far we're loving it out here! I'll miss all the friends I left behind, but I'm excited for the future
S

Not much going on in Monteroland lately, but I did make a trip to the local pick your part and scored big time! I wasn't expecting much since the truck had been in the yard for over a month already, but I got some really clean 01-02 headlights, the whole fixed antenna base (I was a dumb dumb before and forgot to grab the grey tube piece...), the broken piece I need to fix my sunroof, dimmer wheel switch for the dash, and the piece de resistance....a 4.90 LSD rear end!! My first experience with removing a rear diff was rough so I was not looking forward to it, but fortunately this time around was much easier and I managed to have it out in under 2 hours.

Headlights should polish up very nicely. 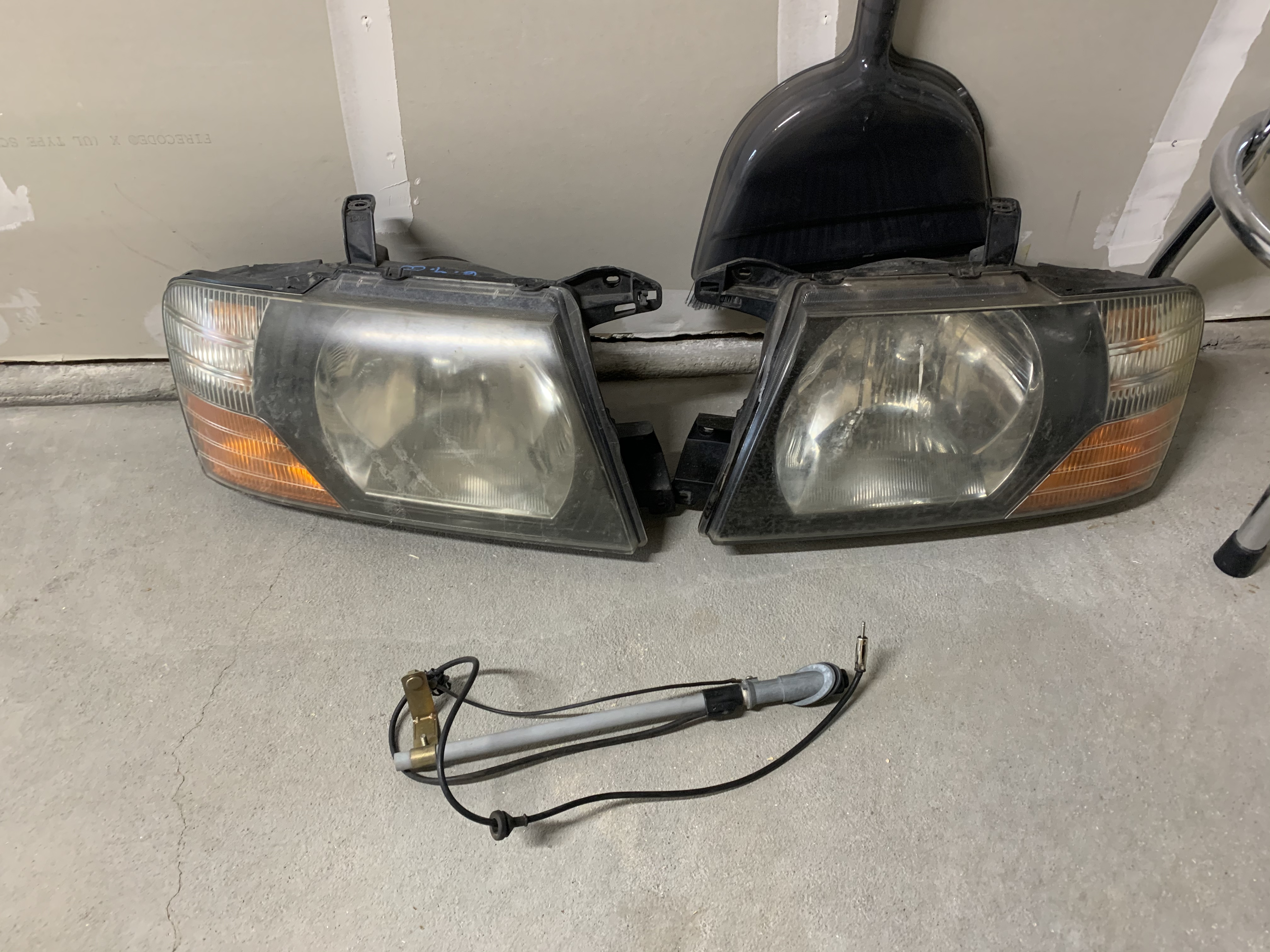 I'm very excited about this one. 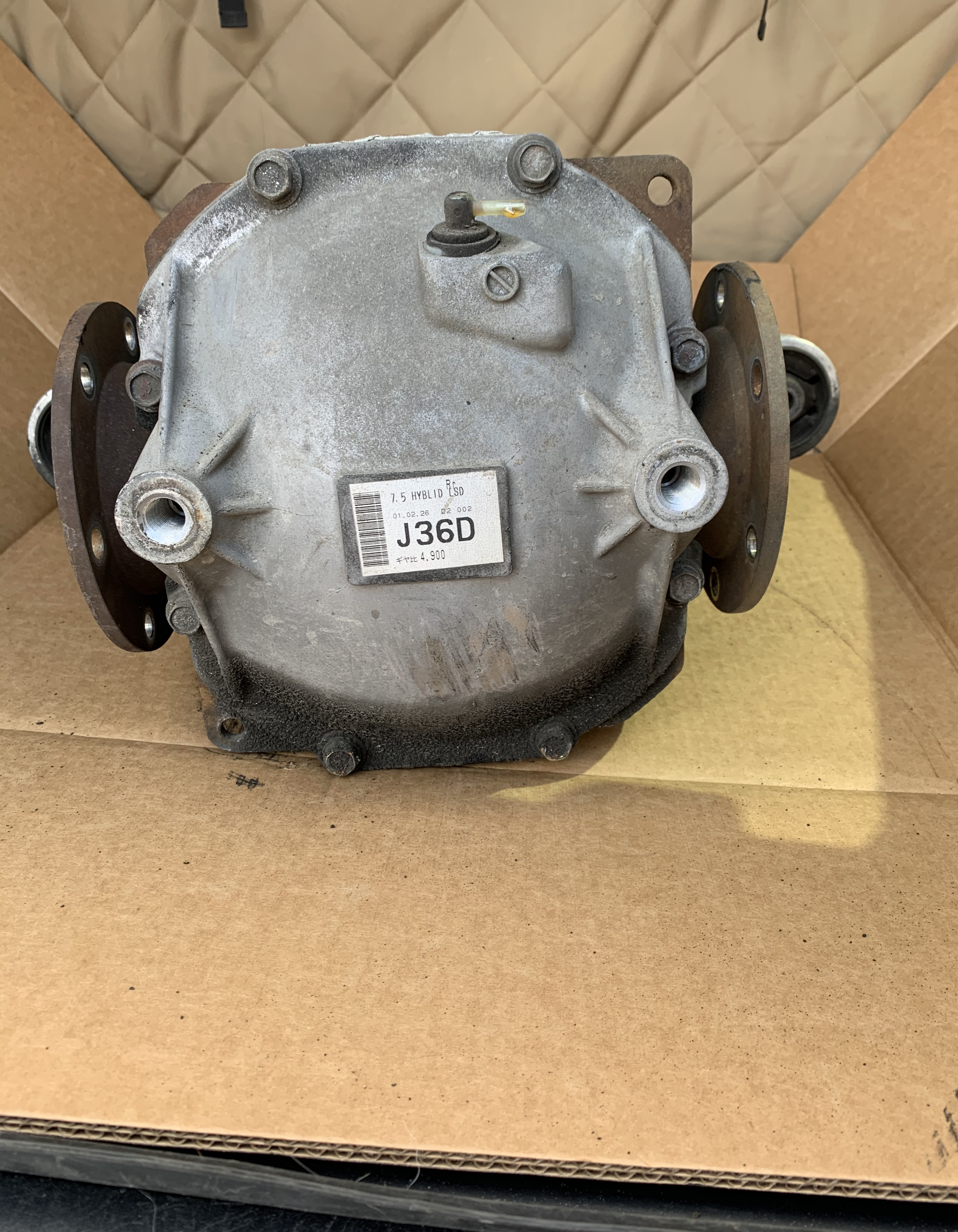 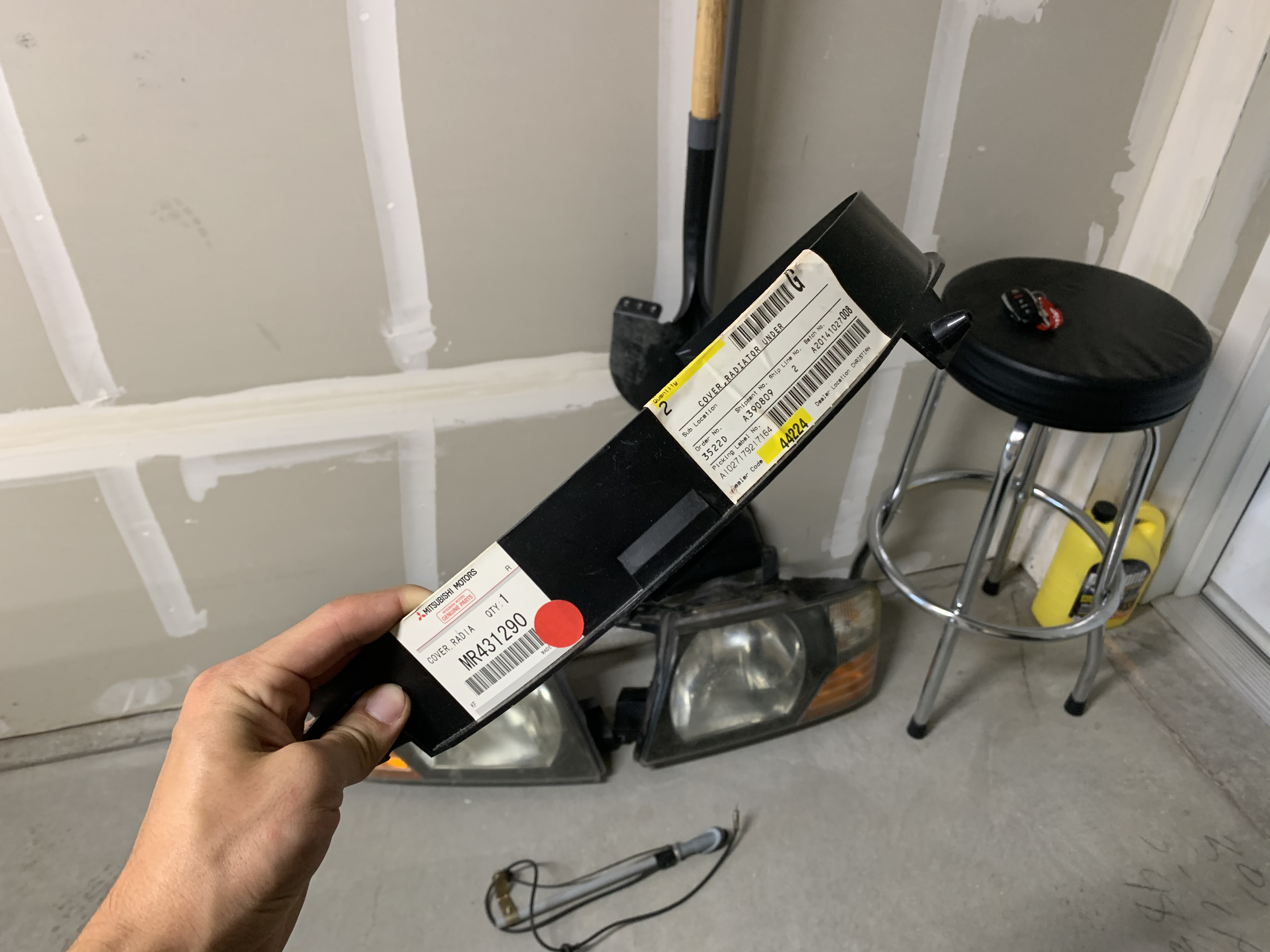 Aaaand, not montero related, but it could be if I used the same skills to make a drawer system...

Been working on a media cabinet for the new place. Figured since I'm a stay-at-home dog dad for the next couple months, might as well build some furniture instead of buy! 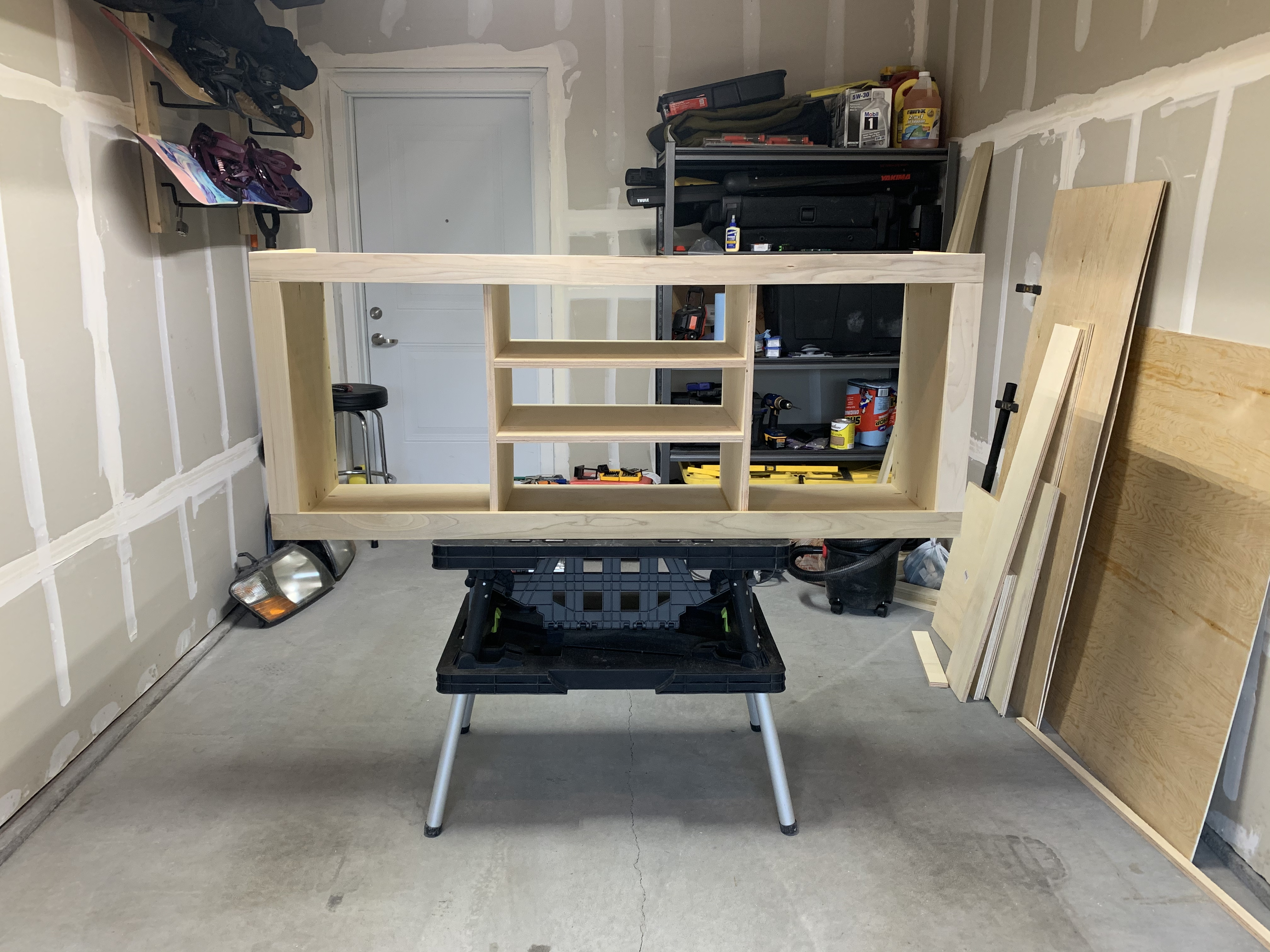 You will dig the LSD rear end!!
Congrats. on the find!
S

Inyo_man said:
You will dig the LSD rear end!!
Congrats. on the find!
Click to expand...

Glad to heard that, I'm stoked to try it out!!
S

Been in a real lazy spell lately...anyways, took the literal 5 minutes needed to install the new lower radiator flan shroud and working dimmer switch to the dash. Nice to be able to see the dash at night again haha! And while I have not had any overheating issues, having the shroud properly in place will help prevent any issues in the future. 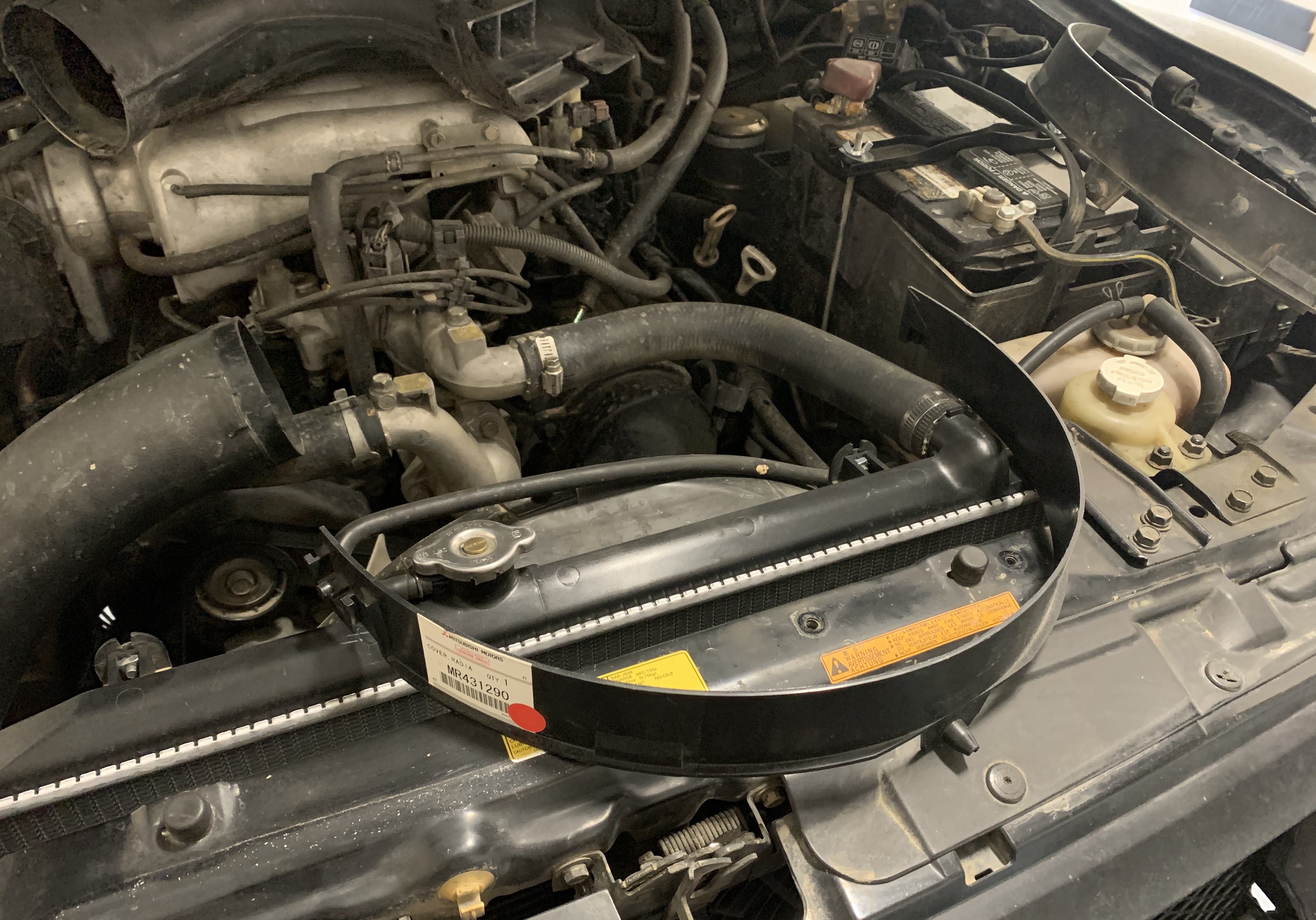 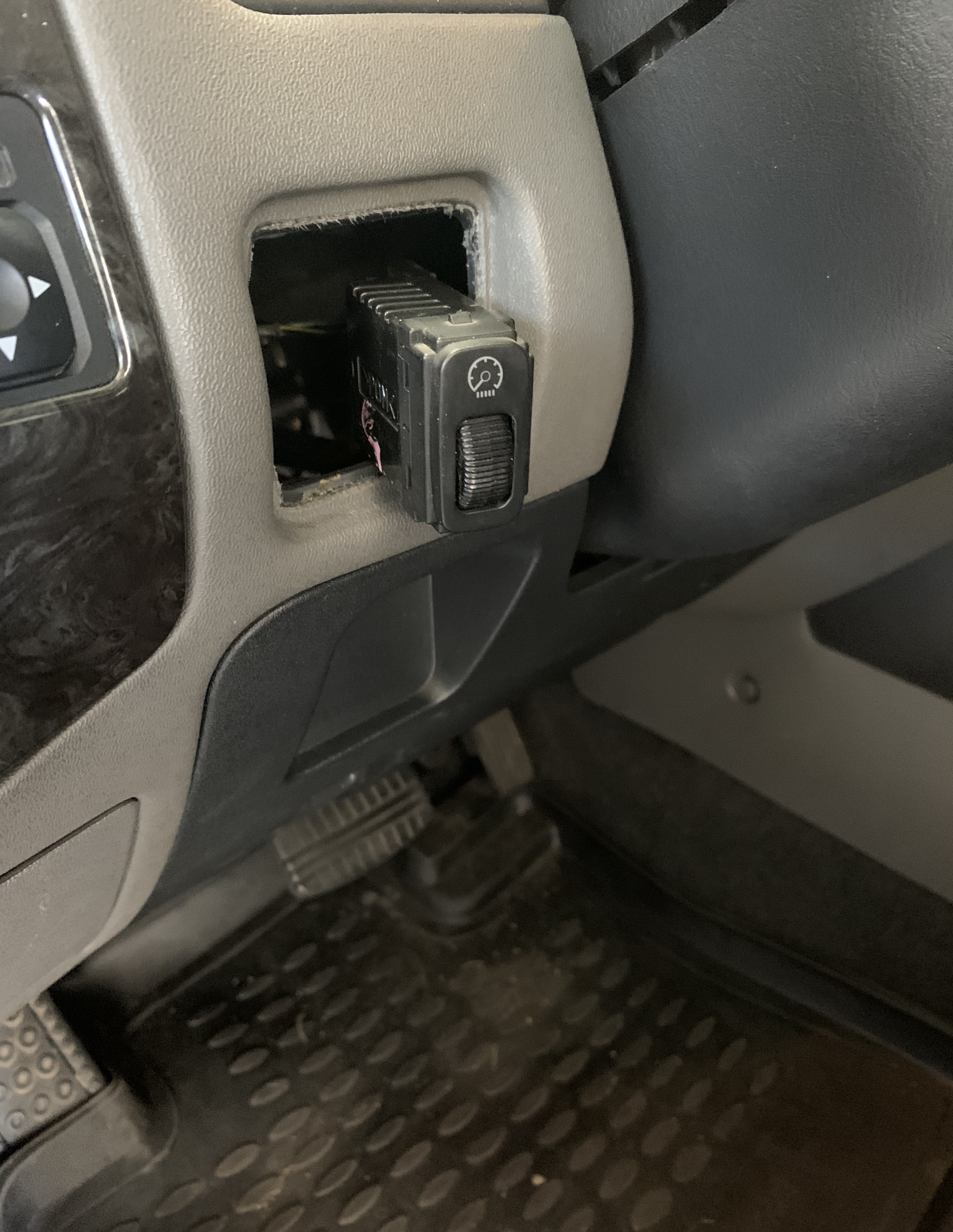 Took a little camping trip exploring my new state! Just a friendly reminder that you don't need all the gucci gear to get out for a couple nights and enjoy nature! Especially with a gen 3. Just fold the dang seats down, grab your best bud, and get out there! I carry little RV leveling blocks with me to level out the rig at night. Sleeping flat is tremendously more comfortable. Speaking of comfortable, throw a cheap sleeping bad on top of the folded seats and its actually quite comfy. 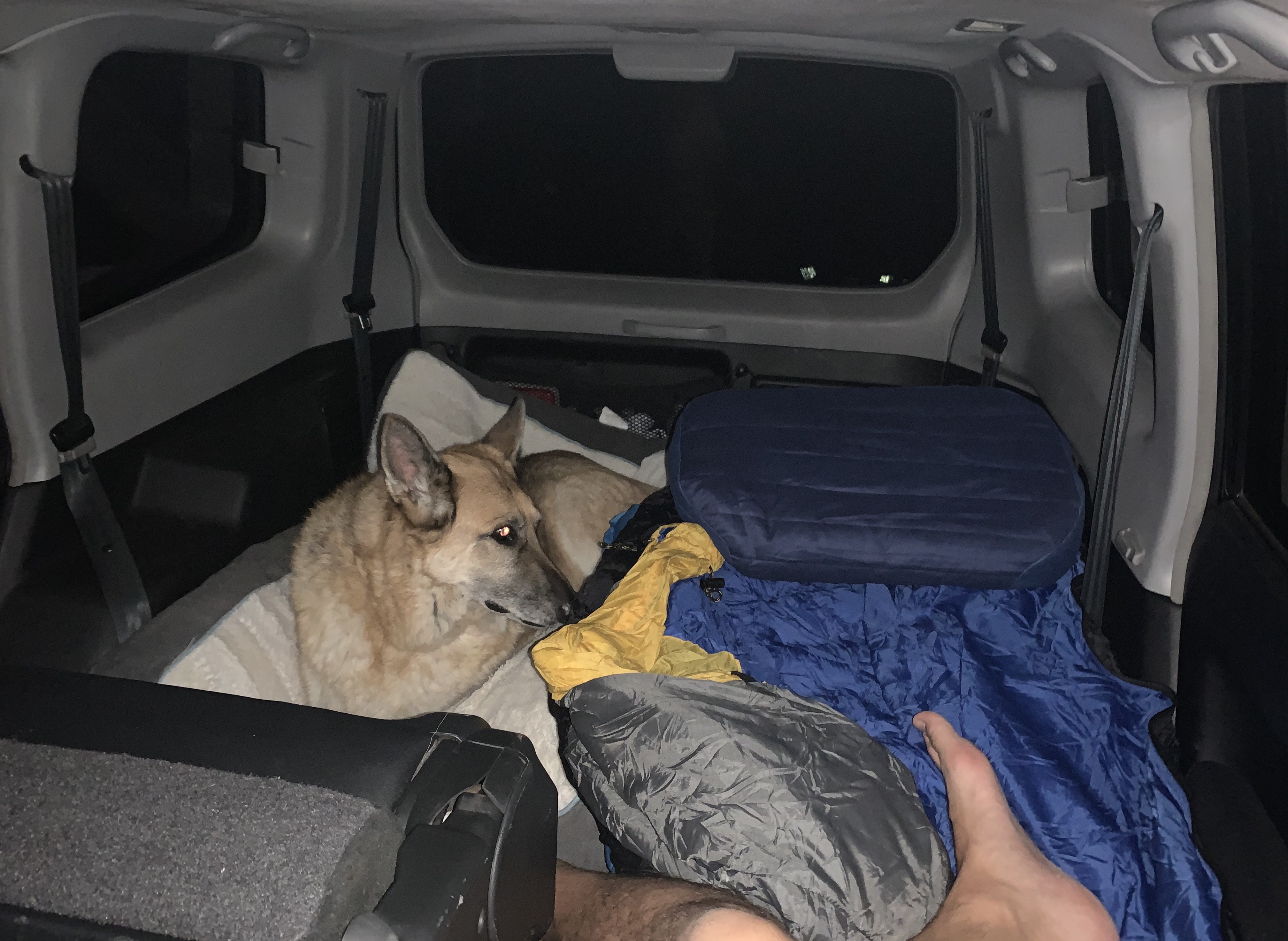 I also forgot how cold it can be at night at elevation here in Colorado haha.. Axe started to get a bit fussy one morning. Synthetic down blanket to the rescue and he was snug as a bug in a rug. 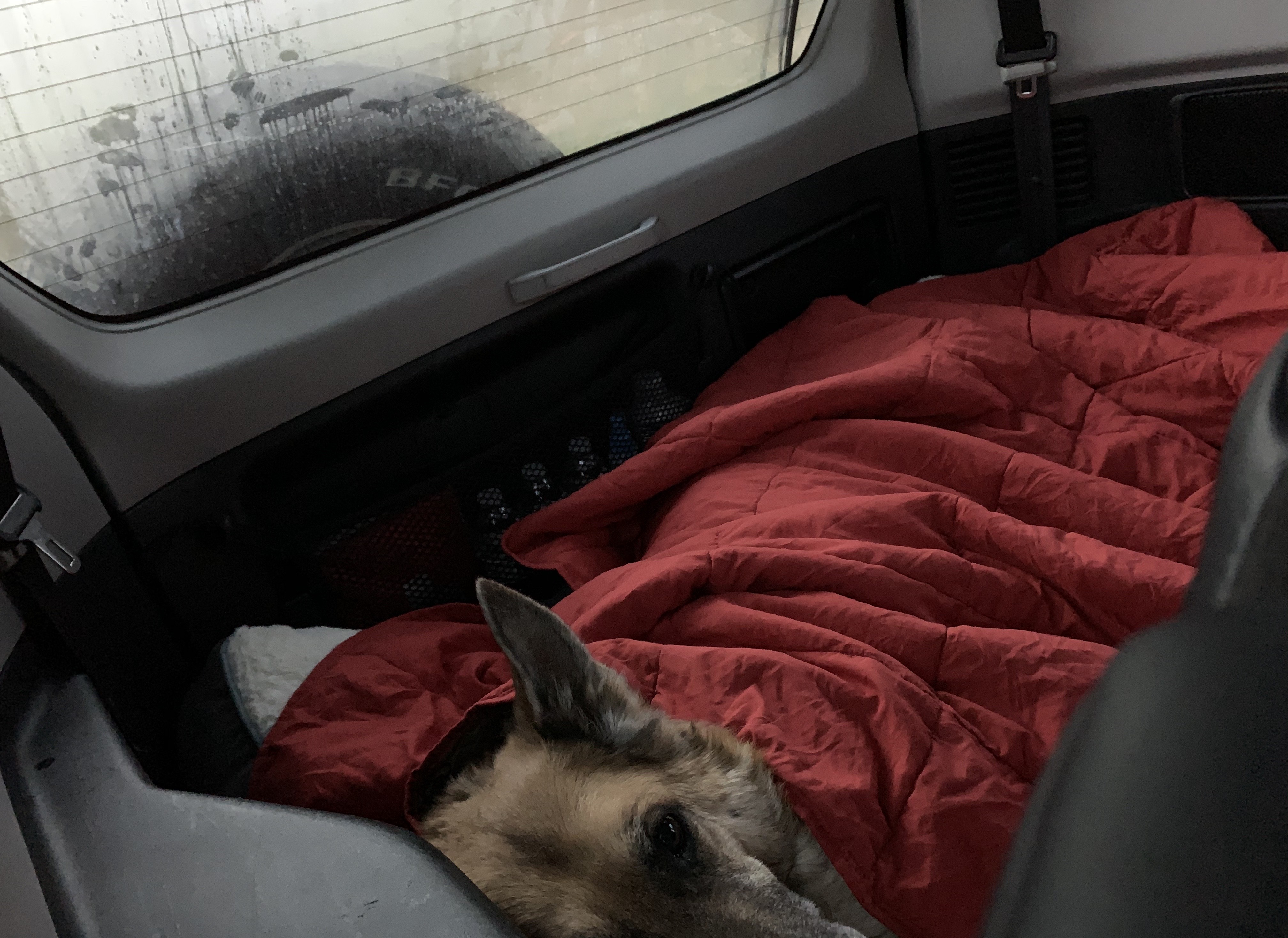 Annoyingly I also picked up a small knick in my driver outer CV boot.. 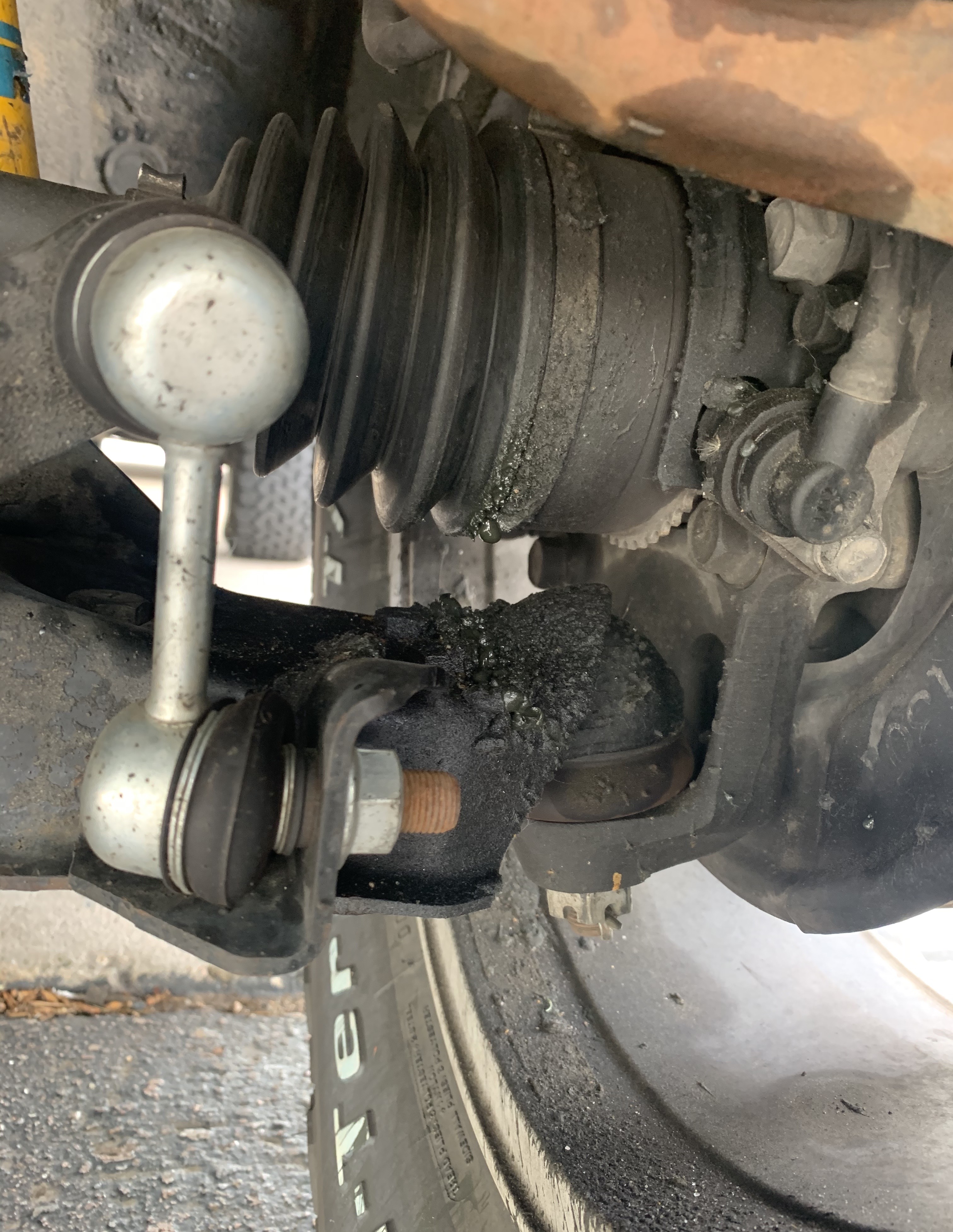 And recently I've started burning a TON of oil. We're talking like 1 L every 300 miles. I think I've narrowed it down to the passenger rear cam seal. 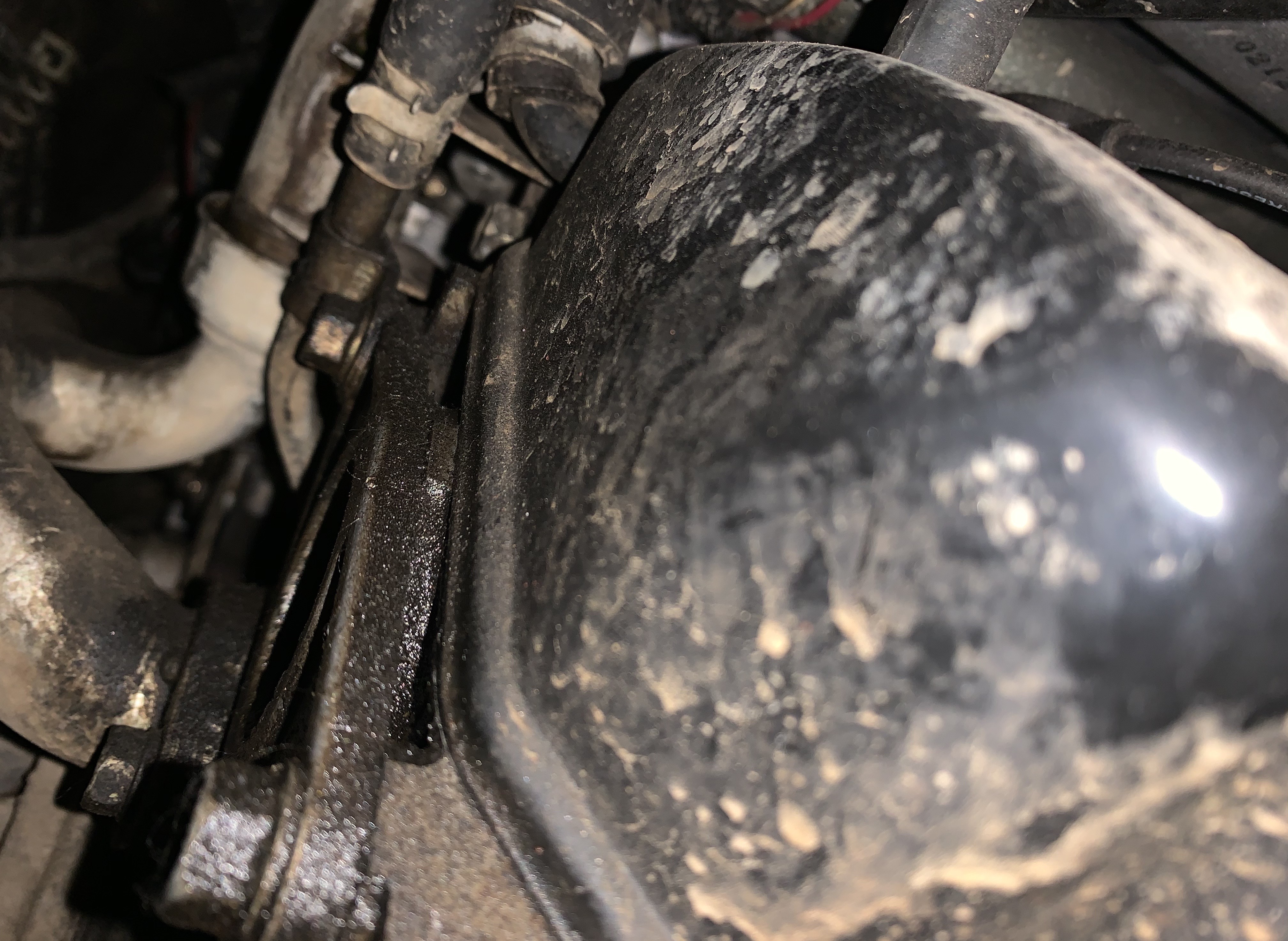 Oh, and also these lights came on and I'm not reading any codes from it. I'm hoping one of the sensors is just dirty.. 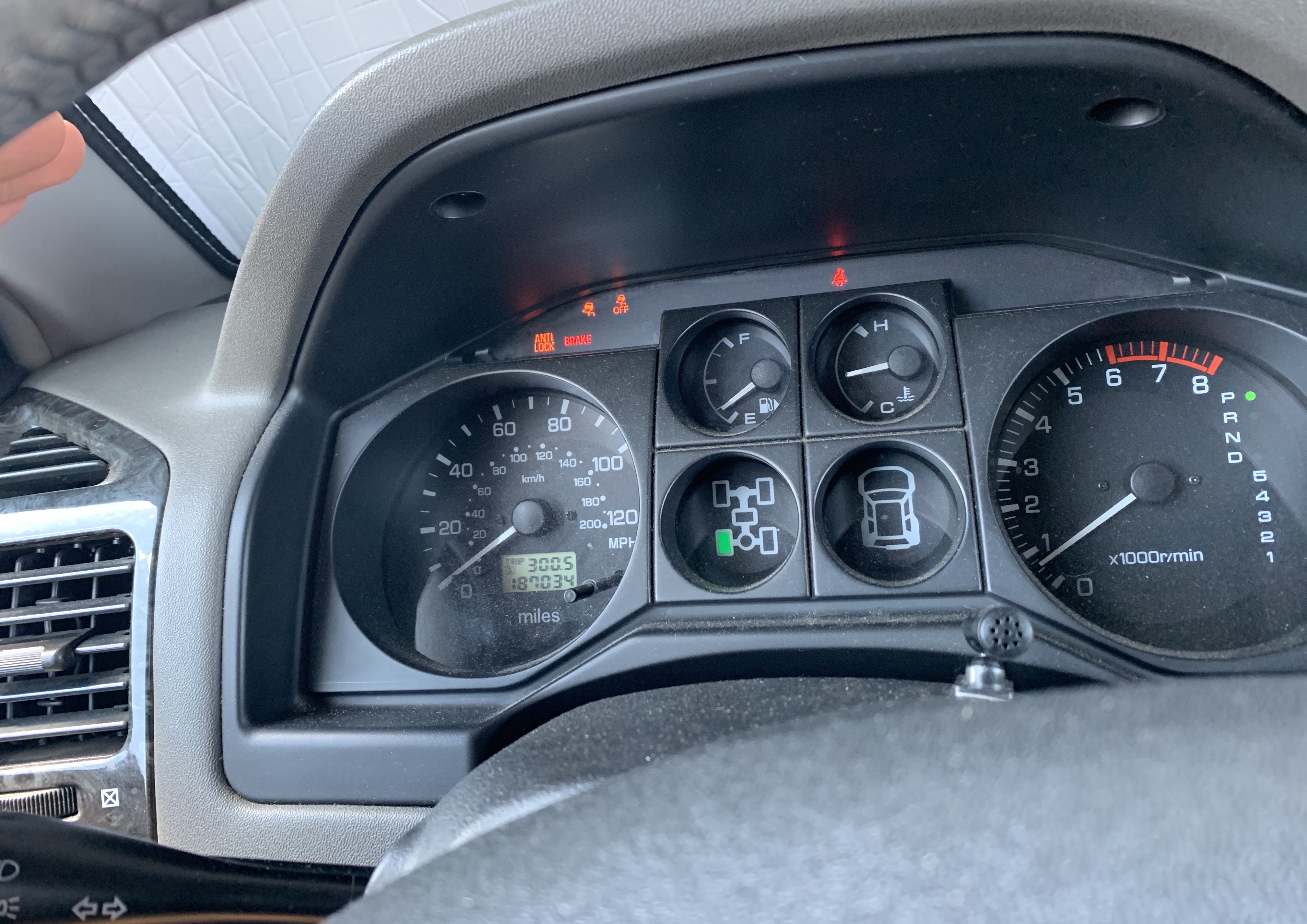 On the bright side at least I've been getting fantastic gas mileage! I've been getting a solid 300+ miles per tank the last 3 or 4 fill ups which have all been typical daily 50/50 driving. I usually fill up at just a hair under 3/4 now. Been averaging 15 mpg!
S

Cleaned up the CV boot of the grease that had spewed out and was greeted by this tiny little slice... Very annoying since I just had my CVs rebooted several months ago. Considering how small it was and that I didn't lose all too much grease, I figured it would have been very unlikely that dust would have gotten in. So, I cleaned and degreased it, scuffed a little, and applied some rubber cement with a bicycle tire inner tube patch. Don't look too pretty, but she should get the job done until I have time to properly fix it. Since I took the tire off I figured it would be a great time to rotate the brand new spare into service. 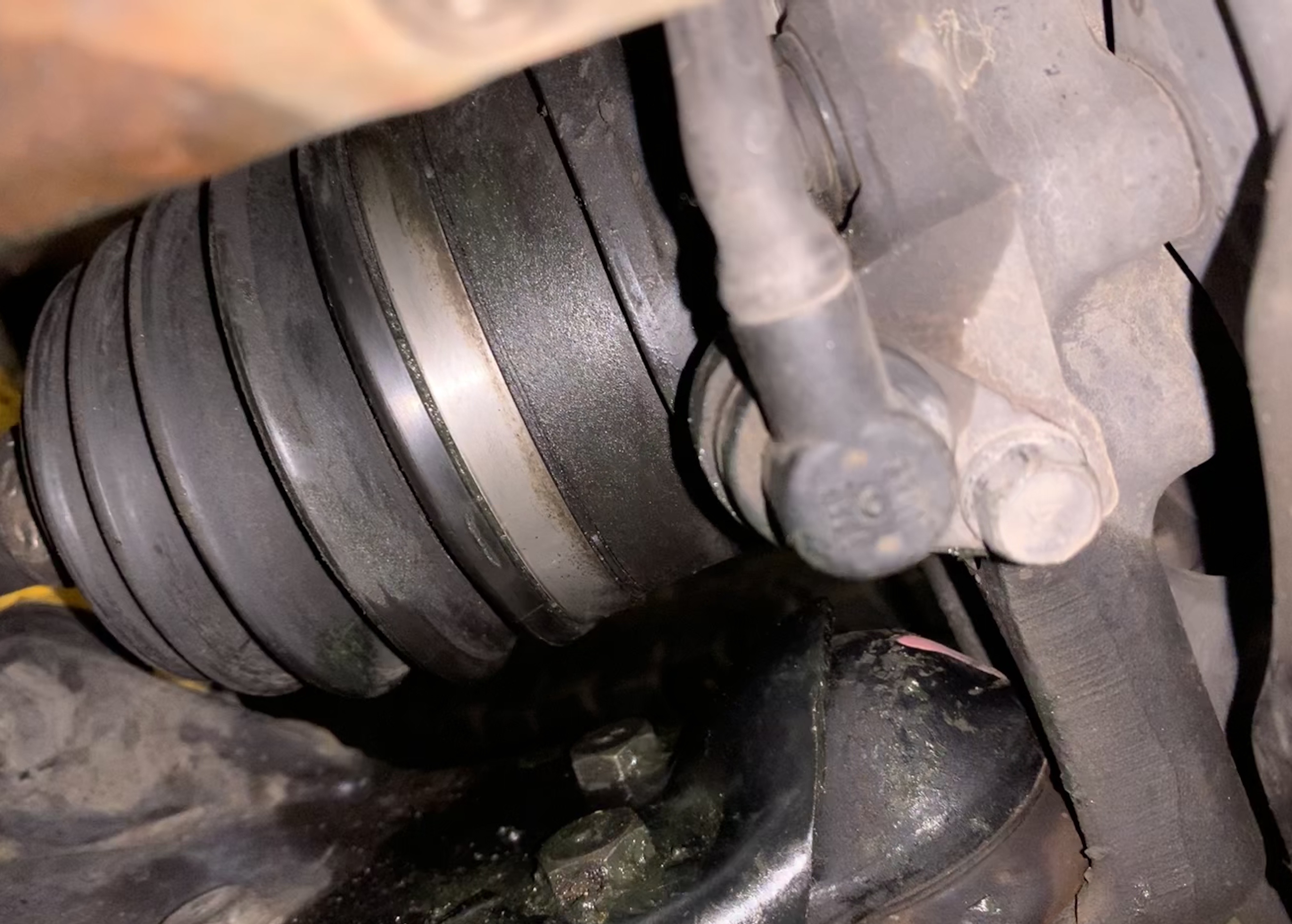 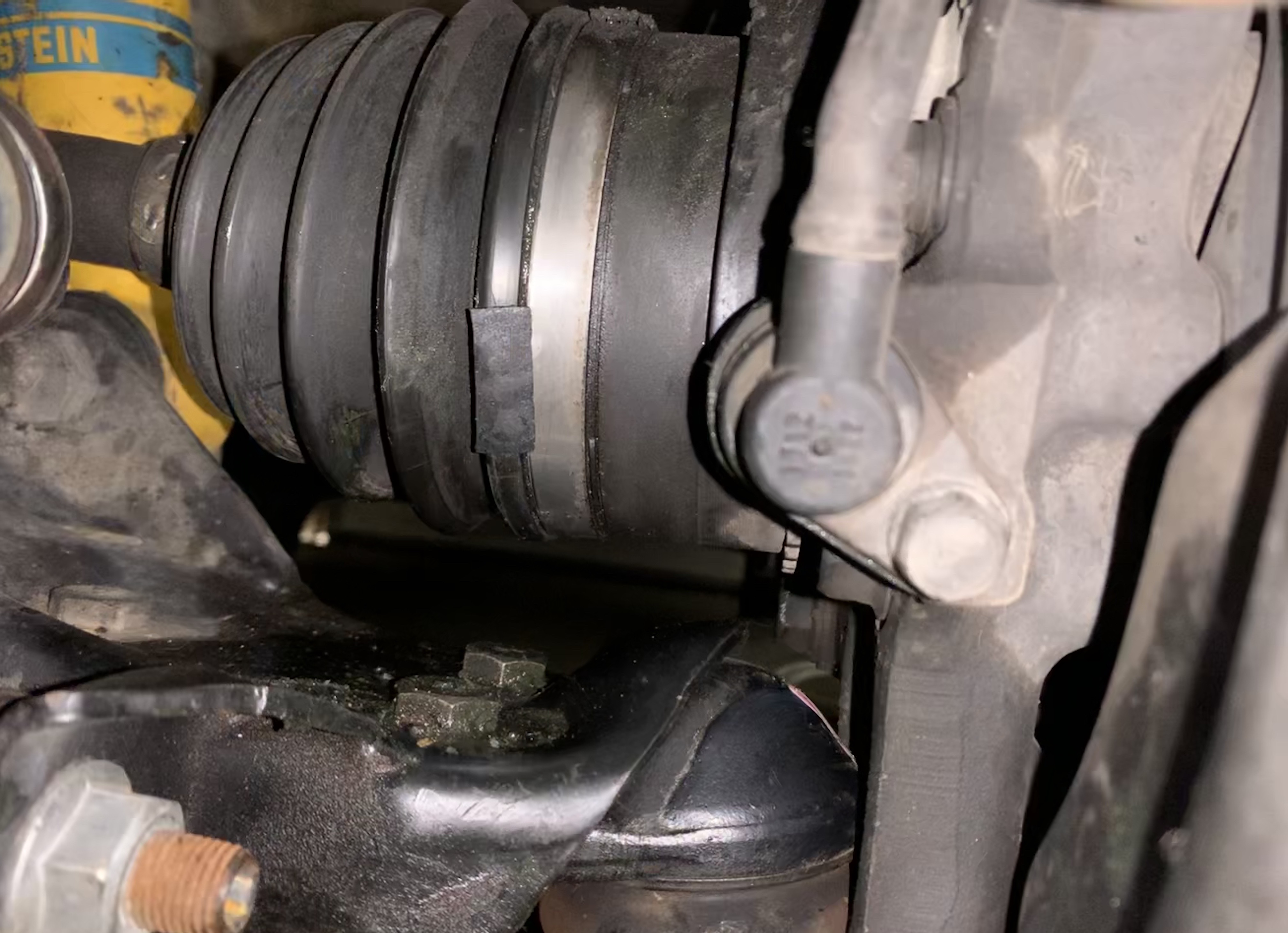 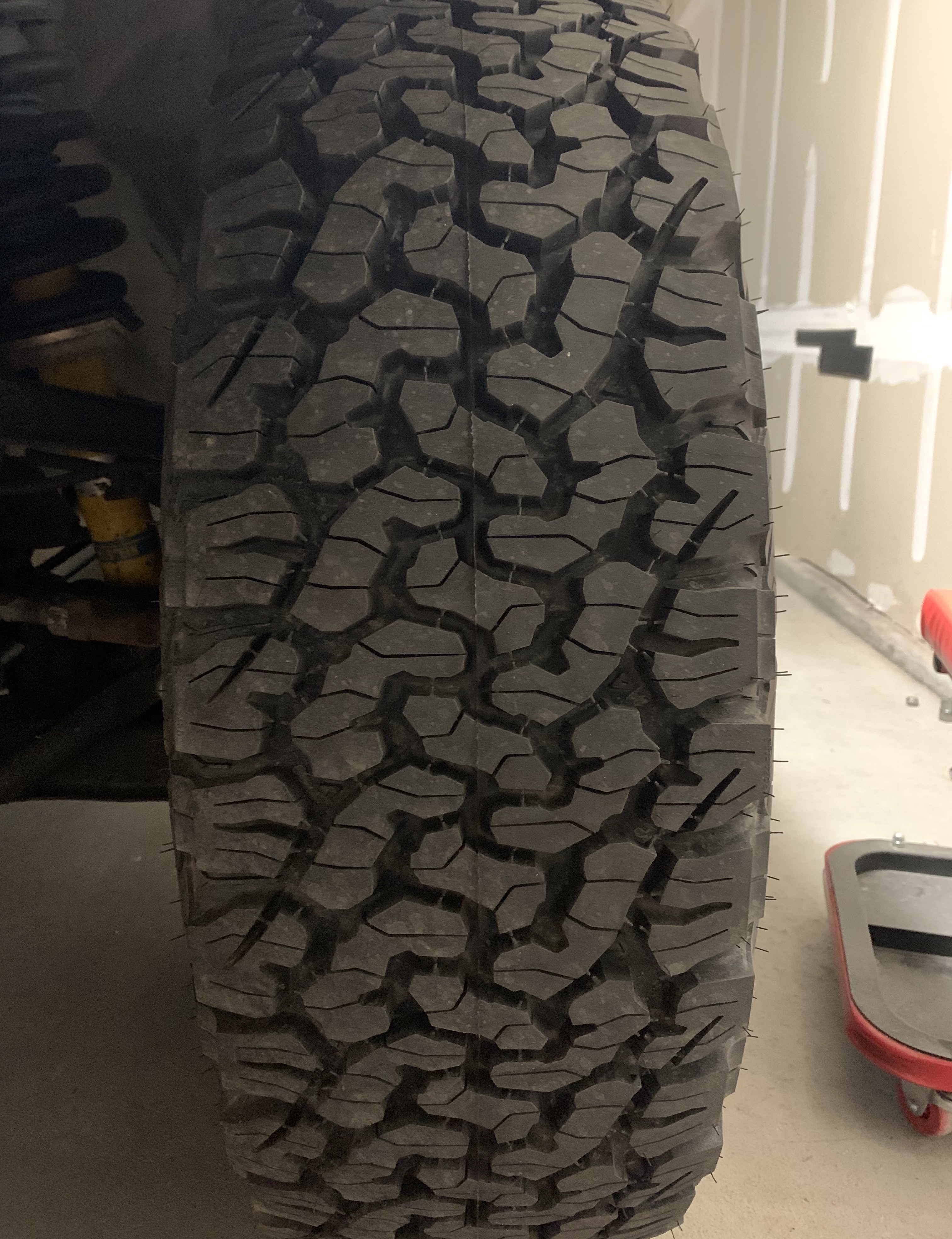 Did you install oem boots on the cv joints? Many aftermarket boots are not quite large enough to accommodate the range of movement...I had the same issue with aftermarket boots. Can you "feel" that the boot is still full of grease?

Zen and the Art of Motorcycle Maintenance: An Inquiry int...
From $30.04
S

Inyo_man said:
Did you install oem boots on the cv joints? Many aftermarket boots are not quite large enough to accommodate the range of movement...I had the same issue with aftermarket boots. Can you "feel" that the boot is still full of grease?
Click to expand...

Hmmm that's a good point. I did not know that. Judging by the shoddy work also performed by the shop I'm guessing not oem. I'll have to check on that feeling of grease.
S

Went an groped the boot. Honestly I can't tell haha.. Judging by the amount of grease that was expelled and how much should normally be in there, I'm guessing I've got about half left. This is definitely a short term fix. I'll be redoing the boots in the next couple months.

Well, as I was pulling out to leave for another camping trip, the rig lit up like a christmas tree (battery, a/t temp, and brake light) and turn signals stopped working. Ended up taking the Touareg instead. 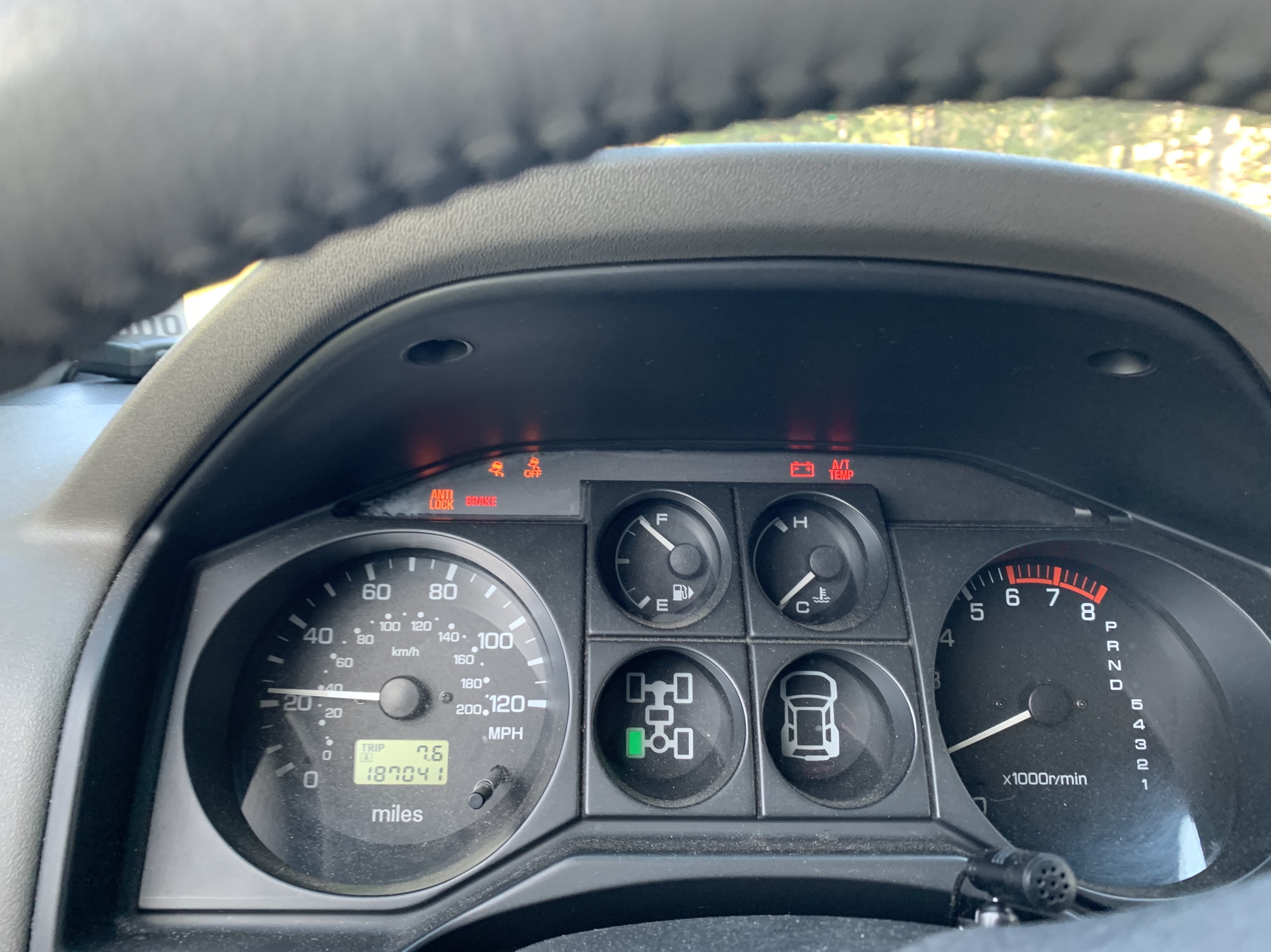 Checked the battery voltage first. 12.60 engine off and 15.22 engine on. That's not too good...
Fuses next...got two blown ones circled in white in the picture below.
Hoping it's not the alternator at this point, but decided to check out the trailer wiring as well as that's a common issue (and because the fuses were blown).

Found it! Looks like the trailer wiring had become unraveled and had been resting no the exhaust tip and melted then shorted out. Fortunately only one wire had damage so I was able to tape it all off and zip tie all the wires back up and out of the way. Replaced the fuses and we're back in business! Interestingly the battery voltage with the engine on now is reading 14.40 which is proper. Hopefully it was just reading high because of the wiring issue... 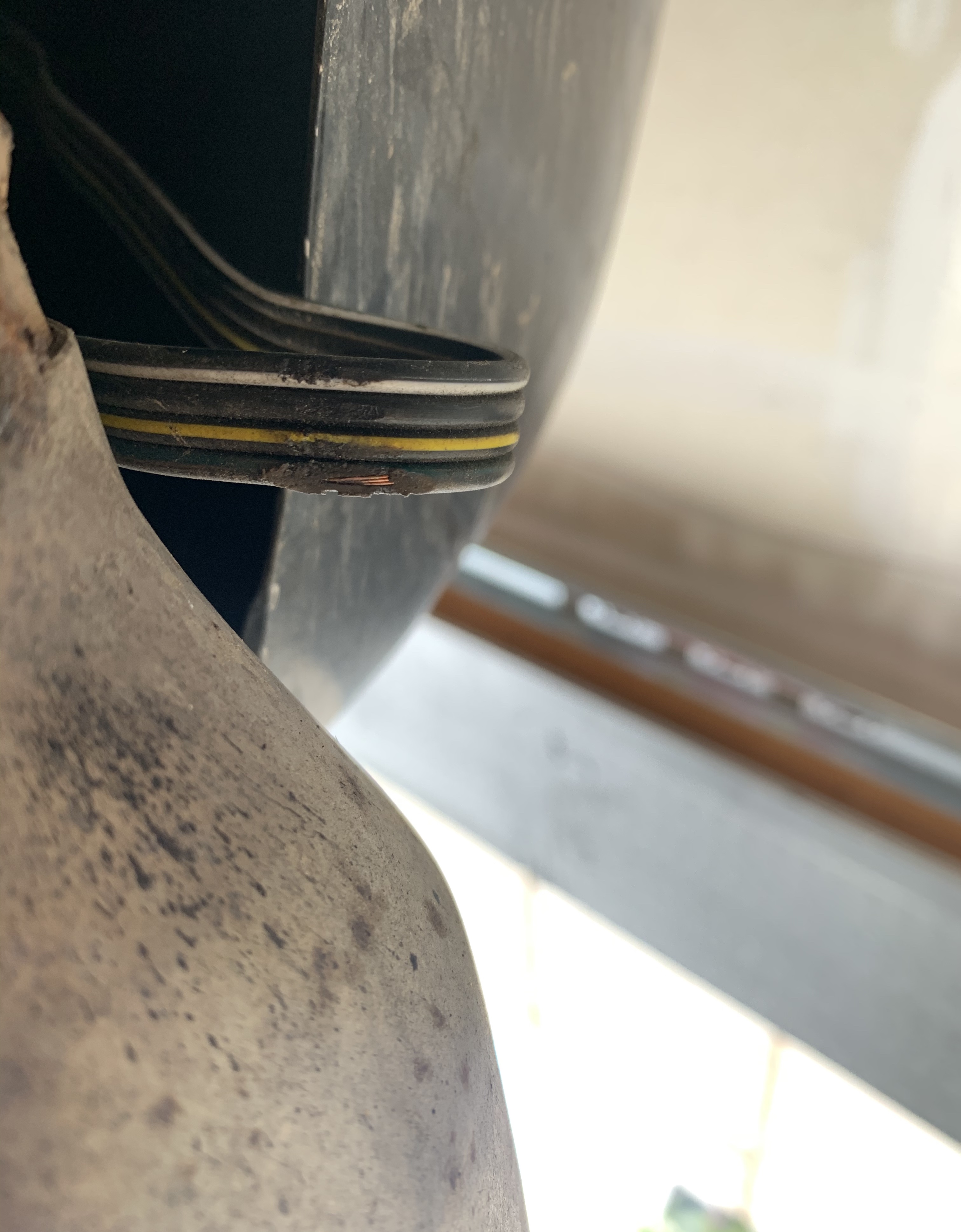 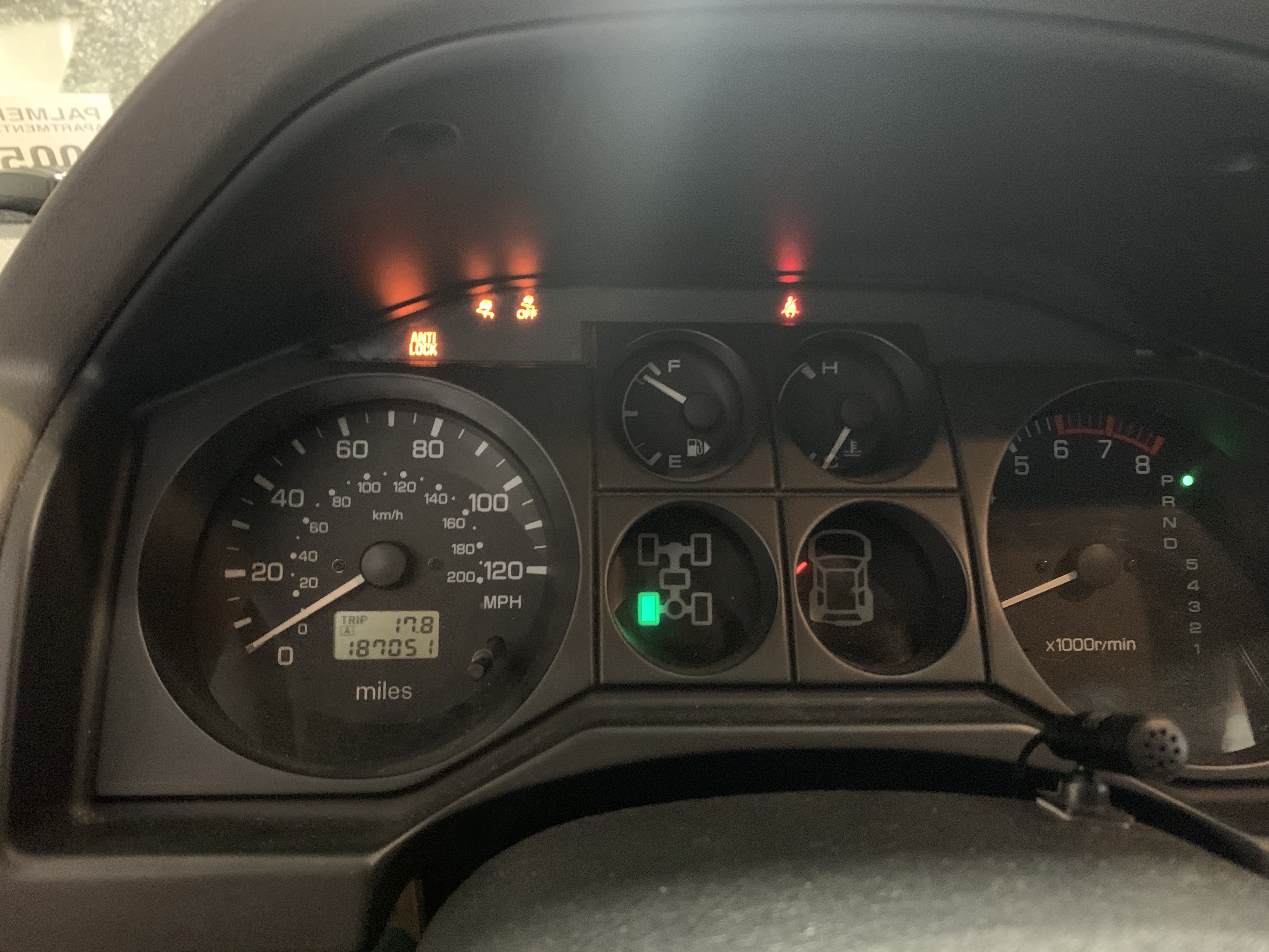 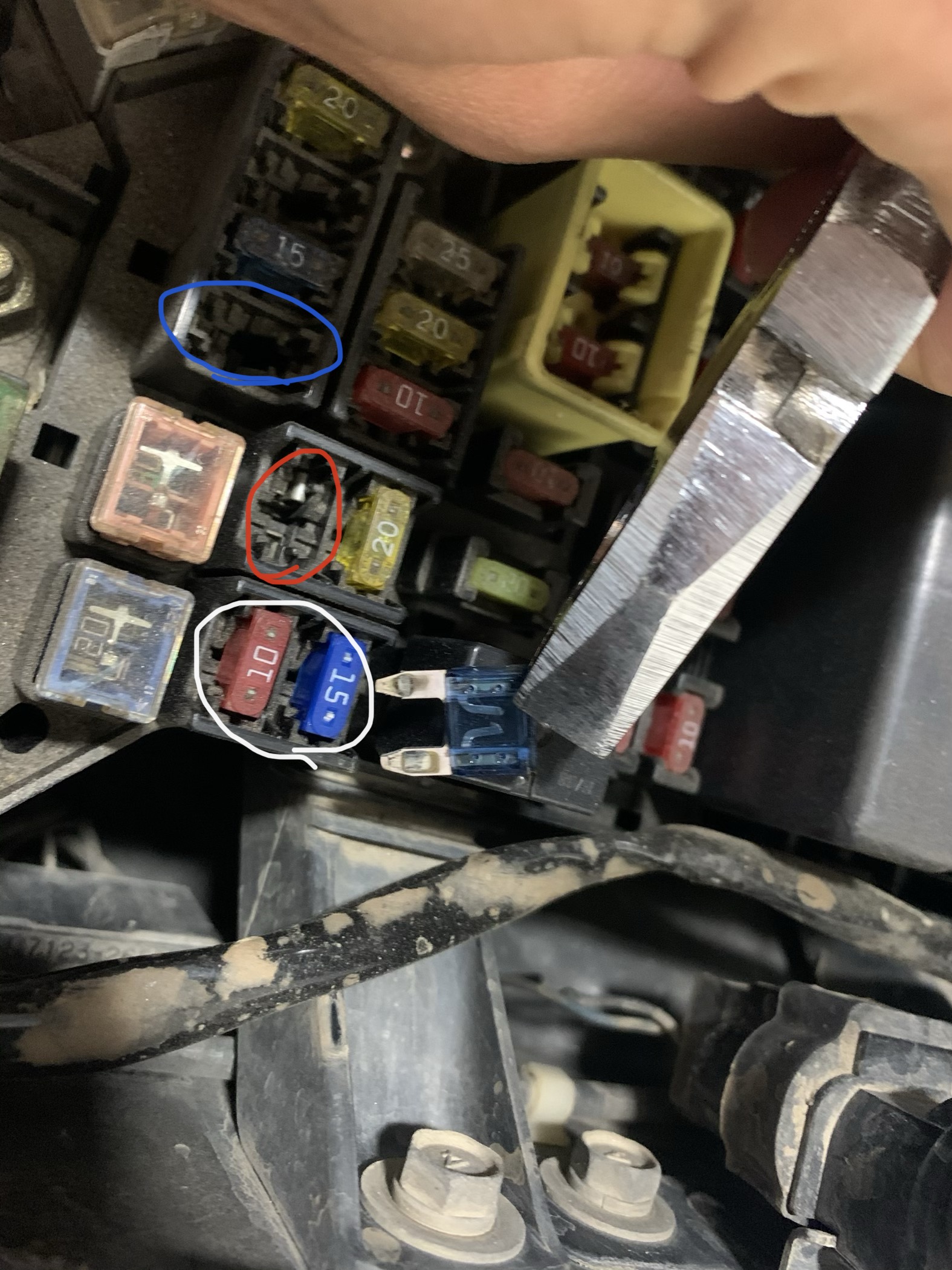 I also noticed some fuses were missing.. a 15amp one in the blue circle and a 10amp one in the red. Plugged them in and got a loud greeting and realized why they were pulled in the first place ha ha... Looks like I'll need to fix that horn pad. I've always known the horn didn't work, but I just never bothered to figure out why.

Now to figure out those traction control lights...
S

Went for a drive to the DMV to pick up my new Colorado plates (woohoo!) and everything decided to work again. I swear she is such a prissy girl lol.
Popped the plates on and installed and polished the new headlights I grabbed from the LKQ yard. Used my go to 3M 39175 heavy duty headlight polish kit. Woo-wee! She's looking like a whole new girl out here! Almost makes me want to go for a proper wash and detail (but it rains here literally like every week). 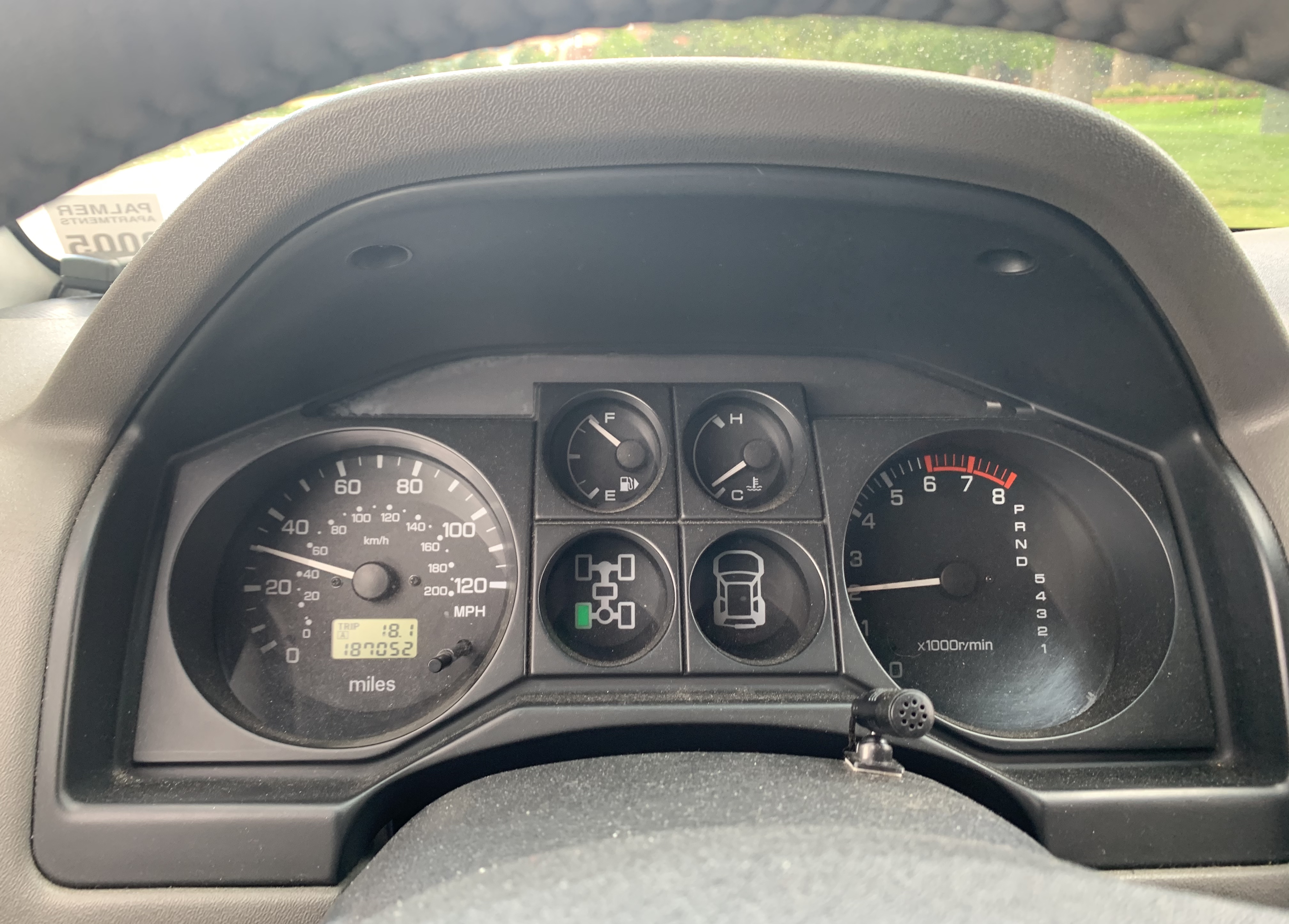 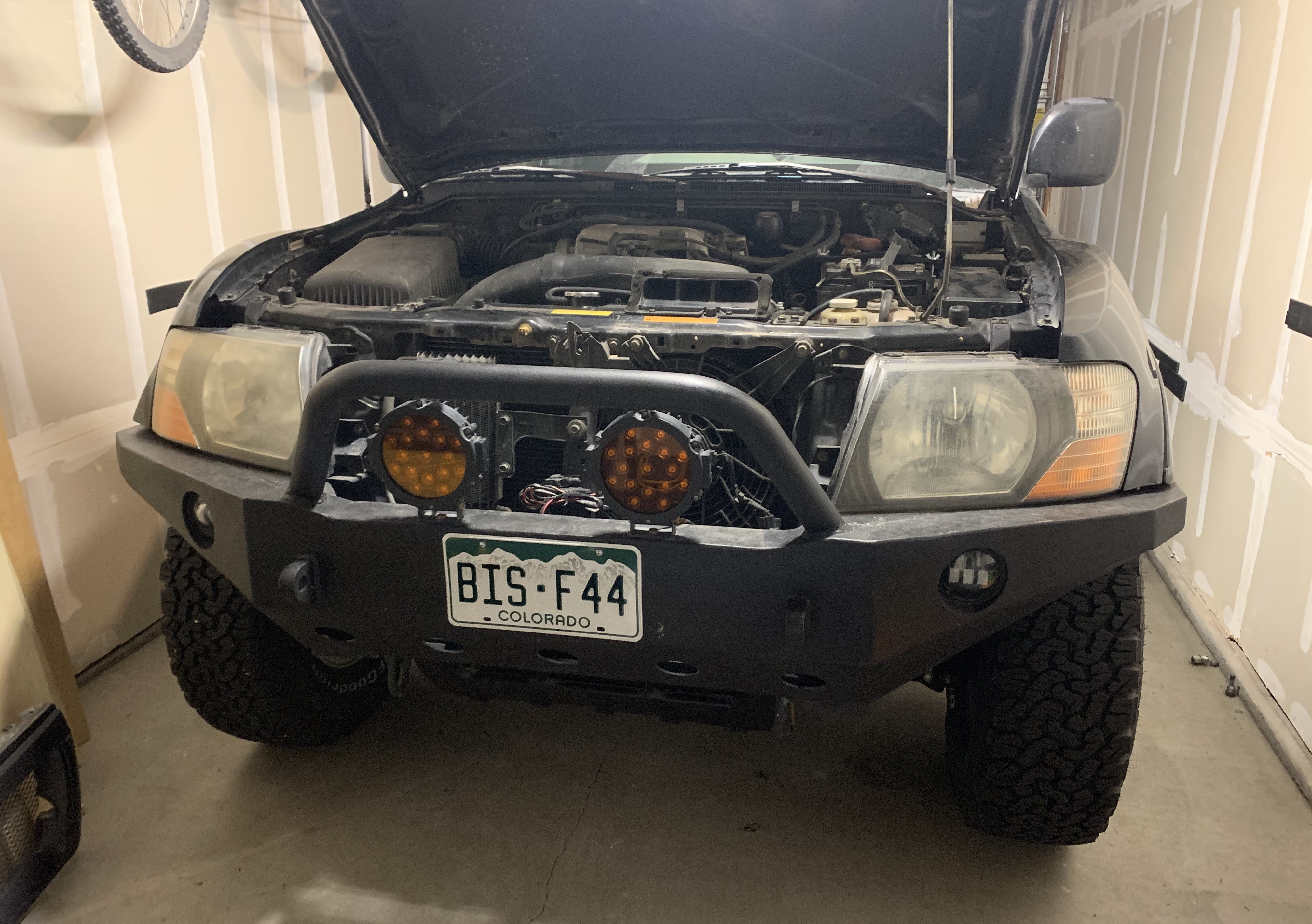 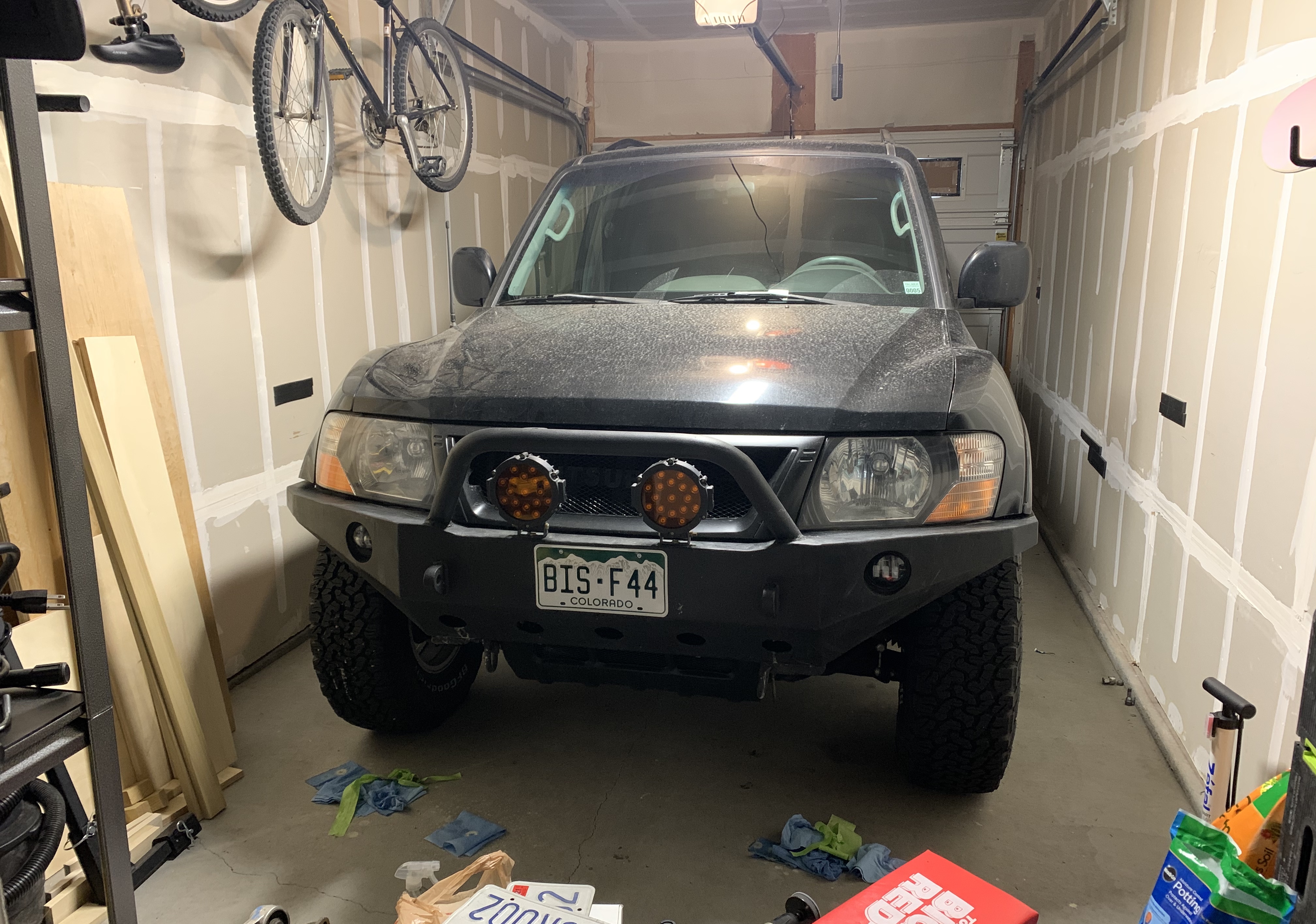 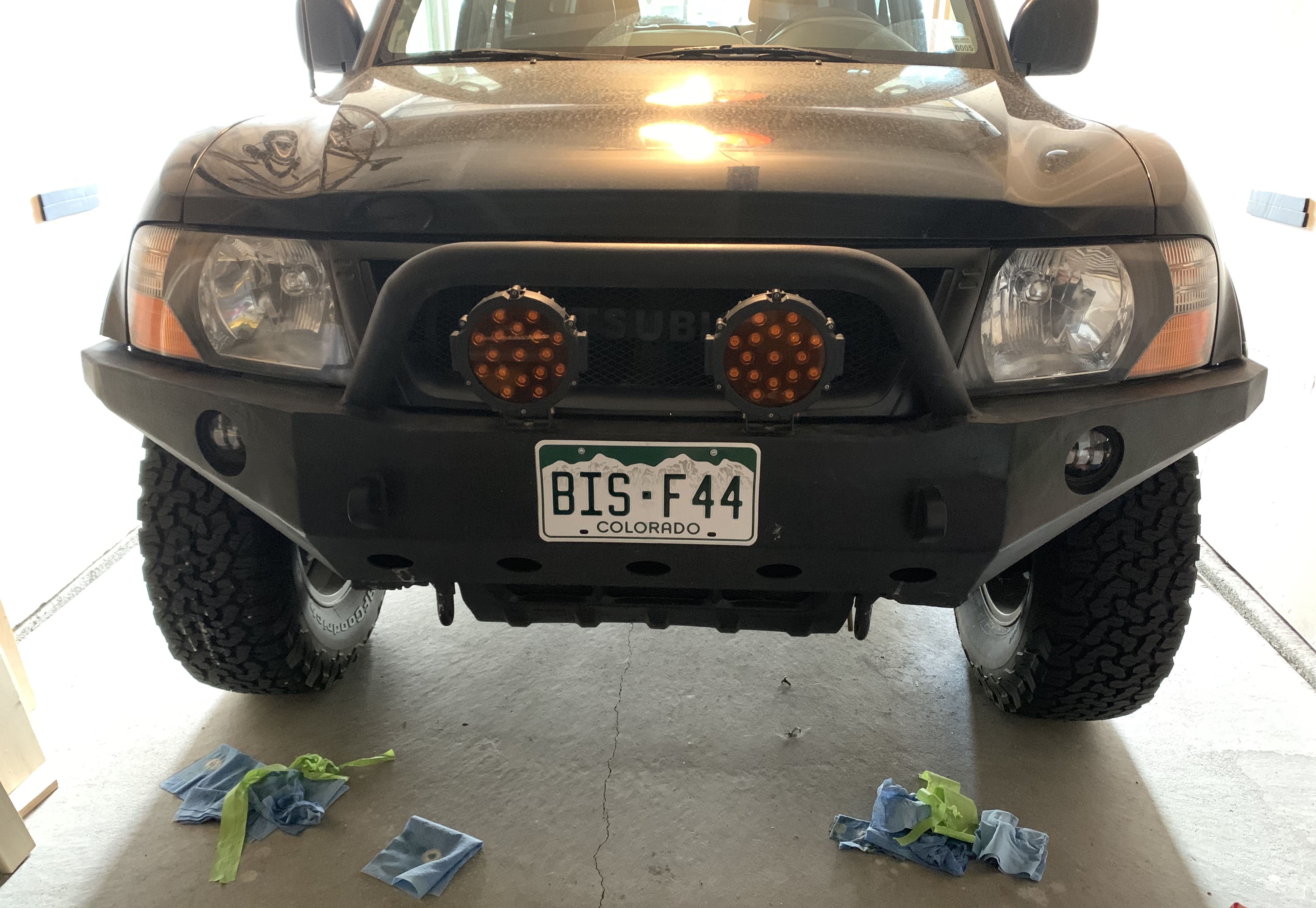