Wow, some very impressive platforms and drawer systems here. I sort of don't feel worthy, but mine was built for a specific purpose so I'll share anyways!

We have two large Rhodesian Ridgebacks who travel with us, so I had certain design limitations/criteria. Meet Emmett and Freya, aka the Notorious A**-Clowns. I love them like they're my children, but they definitely have more size than brains. 1. It could not be tall because I didn't want it to be more difficult for them to get in the back of the 4Runner and I wanted them to have plenty of room to be comfortable on long drives; 2. I wanted a flat sleeping platform for when I sleep in my rig; 3. I wanted tie downs so I could secure my gear in the back; 4. I wanted at least a little bit of additional storage space; and 5. I wanted it permanently mounted in the rig without any permanent modifications to my 4Runner.

What I figured out is that if I remove the rear seat bottoms (4 x 14mm bolts) and then fold the rear seatbacks forward, there was a 2 1/2" step between the rear cargo area and the seat backs. I slept on that a few times and it was long enough for me (6'3"), but the step was noticeable and uncomfortable. My plan was to build a platform for the rear cargo area that was 2 1/2" tall that would bolt in place using the existing tie-down points. Using 2x2 framing would give me 2" tall drawers underneath as a bonus. My plan is to use the drawers to hold a full set of tools for working on the rig which will be kept on board at all times.

There would be a second, forward half of the platform that would be removed during daily use, but easily installed for trips. I saw the platform @MTN4RNR built for his 4Runner and it was very close to what I wanted, so thanks for the inspiration Max!!

I started by building a frame out of 2x2 aluminum stock a friend had lying around. We carefully measured where the stock tie down points were and then designed the frame to fit. This was the rough diagram we came up with: Then we built the frame: That was the first day.

I took the platform home with me and built the wood platform using high grade plywood the next day. If I recall correctly, the plywood 3/8" thick. I traced the pattern of my cargo liner onto the sheet of plywood and then cut it out using a jigsaw. (Of course I had to buy a new jigsaw since my brother had borrowed mine and I didn't want to wait until the following weekend to get it back from him. New tool, yay.) After test fitting it and doing a little trimming, I then cut a piece of outdoor carpeting I found at Home Depot to size. The carpet very closely matches the color of my interior, bonus. I then cut a second sheet of plywood to match the first. You'll see why in a second here. Then it was time to add the tie-down tracks. I used Mac's VersaTie tracks for this. LINK I cut the tracks to length, and then drew around them on one of the sheets of plywood. I cut out where tracks were and then sandwiched the two pieces of plywood together using glue and short screws. Then I screwed the tracks in the holes I had cut out and glued the carpet on using spray upholstery adhesive. This made it so the tracks are flush and do not stand proud of the platform, making for a very comfortable sleeping deck. I then bolted the aluminum frame in place after removing the four factory tie down points. Max had suggested mounting the platform over the existing carpet because it had noise deadener in it. Without the carpet it would be very, very loud. Then I screwed the wood platform to the aluminum frame and the back half was done! The next step was to build the removable front section. First, I drew a high-tech rendering using CAD/CAM technology. (Is that a thing?) It's basically a rectangle of plywood with carpet glued on and plywood stringers screwed to the bottom to level it out. I need to figure out a way to secure it in place. For now, there is a flap of carpet that covers the "joint" between the two platforms and I just screwed that into the back half of the platform. The last step was to build the 2" tall drawers. I used 1x2 framing strips for the frame and pressboard for the drawer bottoms. The nice part is that I found pressboard with a white side which makes things easier to see in the drawers. I used hinges with paracord strung through them as drawer pulls. Here are the drawers (please ignore the zipties strewn everywhere, their bag broke open): So, how does it work? Perfectly!! With the front section in place, I have a 6'4" long platform which is just long enough for me to stretch out and sleep comfortably. When not in use, I just put the cargo cover over the platform to protect it from the sand and water from my surfboards and wetsuits. For whatever reason, I don't have any pictures from the two trips I took loaded online to show how I secure everything and then set up for sleeping, I'll add those later.

Here's a picture from two weekends ago when I did a long day trip. I haven't yet figured out how to permanently install my CO2 air supply, so I mounted it to a board and then screwed that into the deck. The box next to it has all of my recovery gear and air hoses, etc. You can see how I used the tie down tracks to secure the cargo box in place. Redman333 said:
What slam latches work out there. Ive almost got my drawers finished but don't know hat kind of latches to put on. Id prefer slam latches to anything else.
Click to expand...

What is a slam latch, something that locks when you close it?
The latches my new Goose Gear drawers use are these ones.

Already had the fridge and wanted the lid to open fully, so drawer unit had to go next to fridge not underneath. Designed the drawer unit out of 2mm aluminium plate with 40kg medium duty full extention drawer glides, had the parts laser punched and bent and then assembled with 4mm rivets. I was a bit worried about the rivets but after 18day 5600km trip through Botswana the unit is just as tight as when first assembled

eatSleepWoof said:
Thanks for the tip!
Click to expand...

Try looking through the Sheet Metal & Air Conditioning Contractors' National Association (SMACNA) member directory. It looks like there are 2 or 3 in the Vancouver area. Some of those members only do AC work but a lot of them also have custom sheet metal shops and will bend/weld up whatever you need.

Phase II s complete on my new Goose Gear cargobox.
I added in the FJ Cruiser plate system yesterday that secures the box to the deck of the rig.
http://forum.expeditionportal.com/threads/18563-Corey-s-2007-FJ-Cruiser-built-for-expedtion-overland-amp-daily-driver?p=2396363#post2396363

Phase III will be the addition of a Tembo Tusk fridge slide to put the new chuckbox on.
I also have the modular tiedown rings that go in the grooves on top of the box, but have not added then yet.
They will be useful for lashing down stuff on top. Folded out for sleeping: 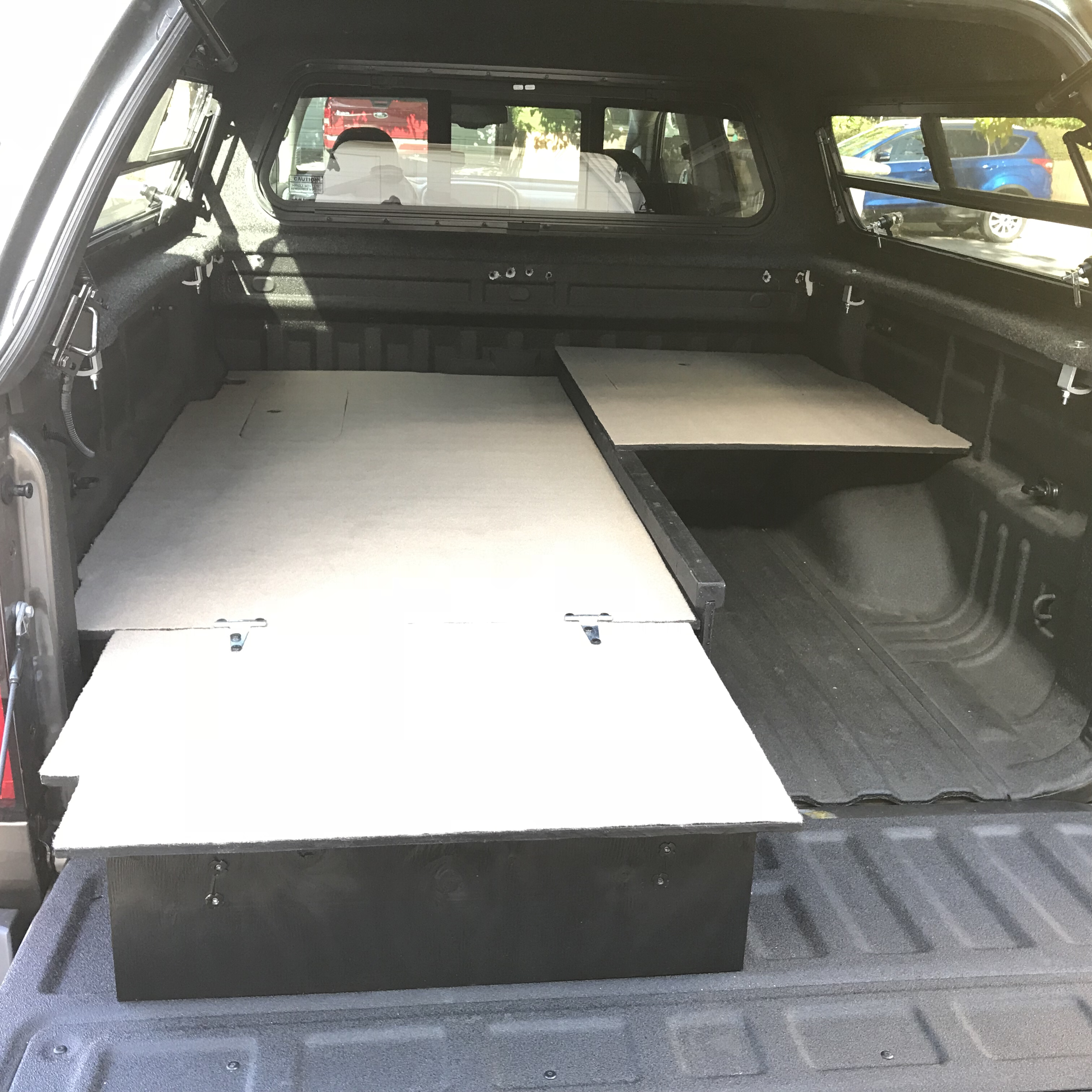 Mounted the solar controller on the bed side using the OEM tiedowns as bolts panels just lay flat so they can be easily take out.

I needed to get my trailer/kitchen set up under control.
The plastic tubs were always swapping locations and I couldn't
Find anything &#63007;

I had already built draw units for my WK and decided to give
It another go.. 2 draws open to the kitchen side....but the trailer
Had a step down to the floor...

So I made a rear facing unit that extends under the other
Drawers, with a step to fit under 2 drawers.

Corey said:
What is a slam latch, something that locks when you close it?
The latches my new Goose Gear drawers use are these ones.

Sorry for the late response, just saw this. No thats not it. Thats a compression latch. A slam latch is a latch that doesn't need to be locked or anything just slam the drawer closed and it catches. Nothing else needed. I ended up finding a solution though. I'm about to post what I have so far actually.
R

So I've been working on my drawers for what seems like forever now. I wanted an easily removed setup, as well as make it modular. So I can run around most of the time with just the drawers and then when I need the fridge just add the enclosure and put the fridge in. I also wanted to be able to take the whole drawer setup out in no more then 5min. I think I found a way to do all of this with this setup. Still not finished but pretty close. Will be using these on a trip as is next week for 5 days and will get to see how everything holds up. Once back I'll finish everything off.


This is what it looks like most of the time during the week when I'm just out and about.

When I decide we are going camping or just want the fridge, the left side is on a hinge and can flip over. Leaving the tray for the fridge. I have t-nuts on the bottom sides of the fridge tray and can slide the fridge enclosure in and run a few bolts in and I'm done. Then it looks like this.

I also have a bottom tray that is bolted to the floor with the factory bolts. The bottom tray has t-nuts in it also and thats how the whole drawer setup gets held down. This way and can easily take the bolts out and slide the whole thing out of the back of the truck. I also plan on drilling a few 1" holes over each bolt so that the drawers don't even have to be removed in order to take the drawer system out. Once it is out its a flat surface to hold anything.

Before I bed line this I will also add some tie down tracks too.

Heres some more pics of the build process.

The install was a bit of a pain but not too bad.

I really liked the Trekpak style drawer dividers but didnt like the price so I made my own. I used corrugated plastic sign material and cut it to size. Used clothes hangers for the pins. Just cut and bent them the way I needed to attach the plastic panels together.

The fridge is on a tilt mechanism also that I built. Its a basic setup. Just a flat board with a hinge at the front and the slide is on top of that.

You can see the hinge better here.

Sent from my SM-G955U using Tapatalk
Click to expand...

I’ll take better pics today when I get home.

Nice work and well thought out design. Hope it works well for you.

brianb2 said:
Nice work and well thought out design. Hope it works well for you.

Thank you and so do I.