Thoreau said:
On the vhf side its higher than ham freqs, but most of the specified uhf range is ham.

Theres nothing within range that would be legal to use that radio without SOME license. Ham for 420-450, lmr for almost all of the rest. That radio would also be illegal on frs and murs. Probably gmrs as well.

Not a single mention of any licensing requirements, and as you mentioned, no part 90 cert. Anything to make a buck these days it seems, legal or not.

And you know what? I wouldn't buy one just because their pitch man just about drove me nuts blabbing "you know what" about 200 times in that 5 minute video.

Here's the mount I built for my FJC for the Yaesu 1802m and the scangauge. It uses the screws that attach the rear view mirror. 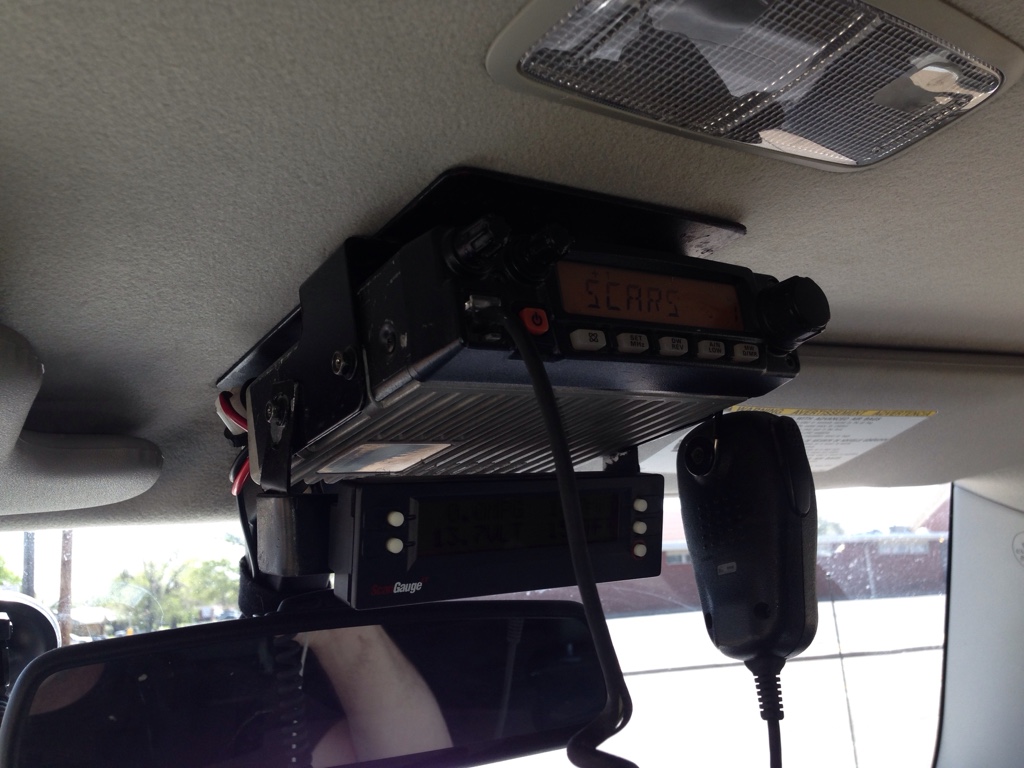 brushogger said:
Here's the mount I built for my FJC for the Yaesu 1802m and the scangauge. It uses the screws that attach the rear view mirror.
Click to expand...

At first I thought the little radio was cool, I actually still think the concept is. But for $210 you can get waaaay more bang for your buck. Not to mention you can get the same radio for 80$.

They also sell a rebranded Baofeng UV5R for 90$ on their website. They sell expensive chinese rip-offs of the cheap chinese radios? That doesn't sound like a smart business plan.

Someone posted about worrying about protection for the radios should something go wrong. I personally think that radios might be the least of your problems when you're knee deep in water inside your vehicle (A few buddies have been there).

A lot of people here use overhead consoles for installing comms, this might be the safest place. Mine is in my shifter console, I have a quick disconect that should save the radio if water comes in (If I can manage to disconnect it amidst the chaos) but then again, my car is worth more than my radio and the latter isn't gonna drive me home, so as said: common sense dictates you should avoid these situations in the first place.
U

I decided to install a Ham setup in my Jeep and trailer. Since I like being overpowered, I installed a little bit too much. That being said, I'm happy with how it came out.

The VHF/UHF antenna is mounted on the driver's side cowl. 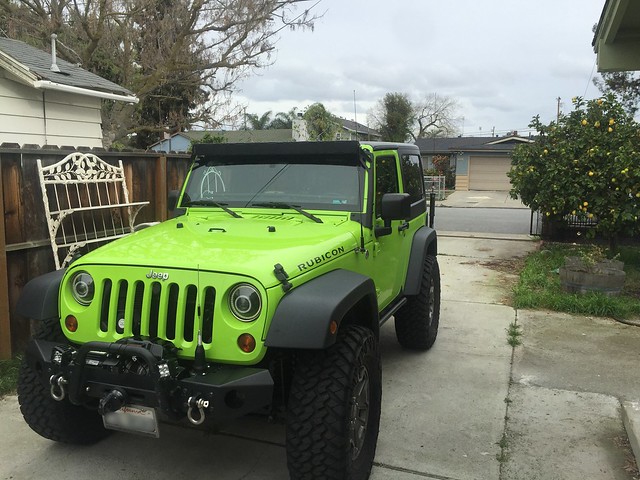 In this picture you can see the PA speaker with a round white sticker on it behind the grill, and the scanner antenna mounted on the front bumper. Since the scanner antenna is receive-only, I don't need to worry about the terrible SWR I get from this location. 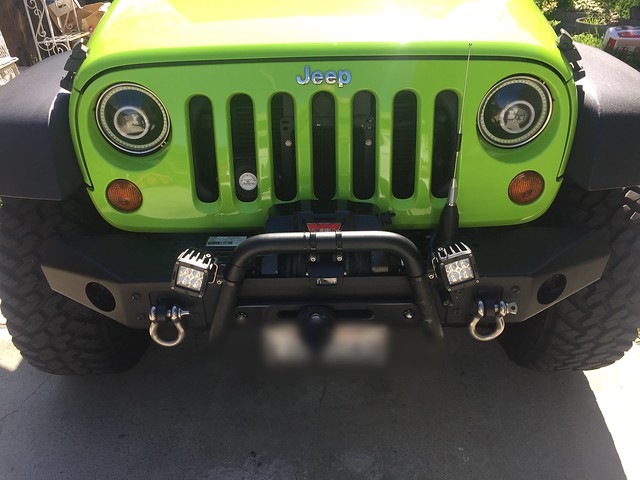 My screwdriver antenna is mounted near the license plate holder. It does pick up noise when I hit the brakes from the nearby indicator lights.

You can also see the CB antenna on the post in the center of my rear window. This antenna is on a quick disconnect and I don't run it very often. My screwdriver antenna can RX the CB bands just fine, and I don't think I want to talk to them anyway. I have the antenna cable run just in case I need it for a group run. The CB is mostly used for it's PA function when offroad to communicate with spotters. 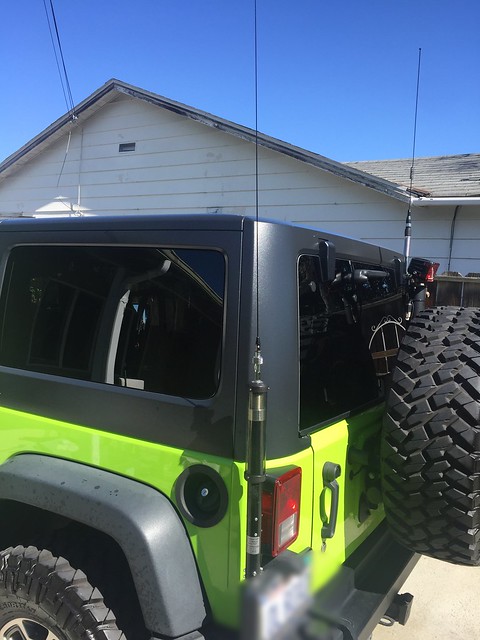 I had to use a cupholder as my IC-7100 mount so that I wouldn't get gorilla arm while using the VFO. Since I like cupholders, I installed an extra one on a RAM ball on the passenger grab bar. The extra cupholder is sort of visible in this next photo hanging off the front of the dashboard. I still have two functional cupholders, and I am still able to fold the passenger seat forward to get into the back.

You can see the ID-5100, the CB radio (more of a PA really, but there is an antenna for it), a mini-mixer, and the speaker up on the radio rack. The rack is thin enough that the GPS receiver in the ID-5100 works correctly in that location so I am able to use the "find/scan nearby repeaters" function in the radio. 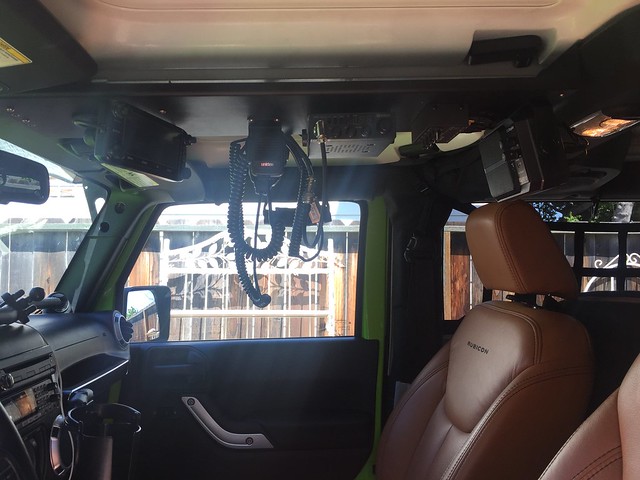 The mic and antenna controller for the HF antenna is down in the driver's side footwell next to the 4wd selector. The antenna controller is kind of hard to get to here, but I'm not really worried about it since I don't plan to debug my HF setup while moving. It is easy to hit the autotune button in this location and that's the only button on the antenna controller that I will ever touch while in motion. 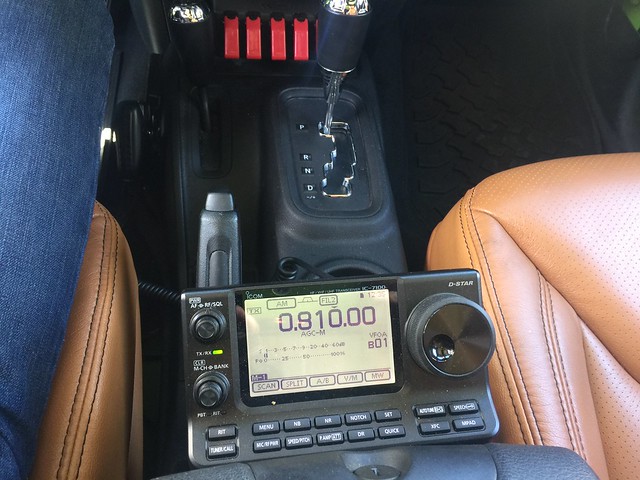 I swapped the stereo with a single DIN unit, and installed the scanner in the dash below the stereo headunit. This scanner does not have a removable faceplate available for it.

The whistler scanner that does have a removable faceplate does not have location-aware memory, so I decided that a geo-aware scanner that is harder to mount is a better call then a non-geo aware unit that is easier to install. 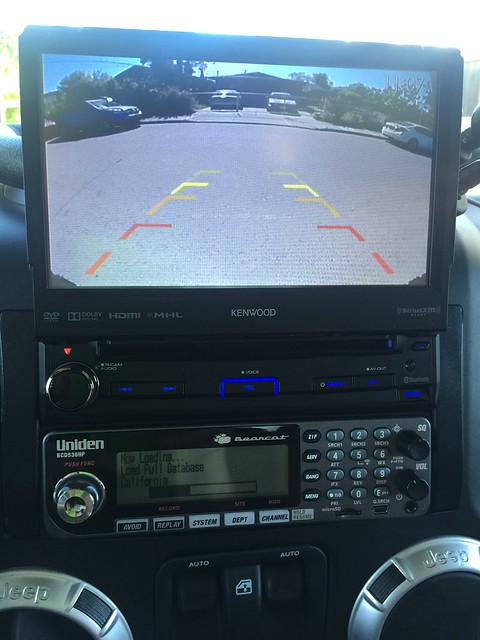 The battery booster is needed here since my trailer is all solar powered. The voltage drop on the dual AGM batteries in the trailer at 100w of output power was so much that the transceiver would shut down.

You can see the 2m/70cm antenna, the scanner antenna, and a 20m hamstick in this photo. My driveway isn't big enough to deploy the inverted Vee. 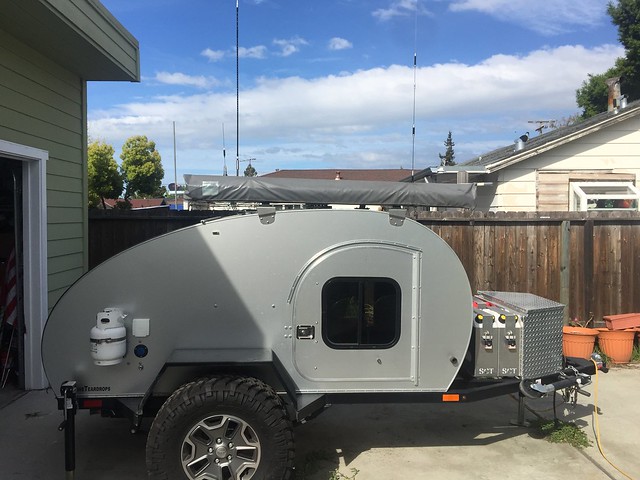 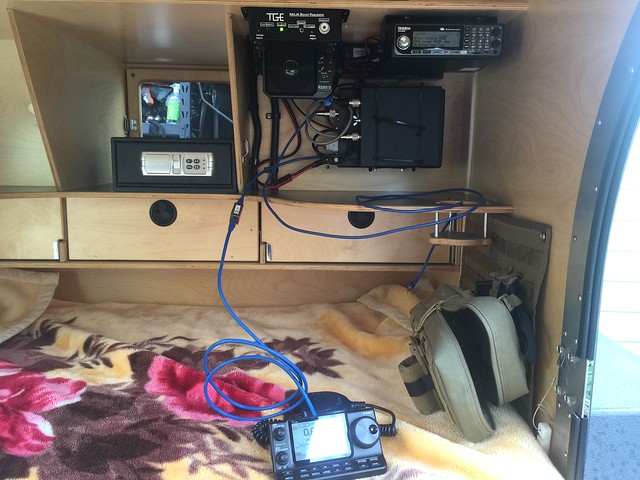 Finally got around to installing my Yeasu 8800R in 2006 LX470. I used a gamiviti antenna mount on the drivers side of the hood with a comet 2x4SRNMO antenna. I used a larsen NMO cable along with some 10 gauge powerwerx zip cord.

I ended up putting the radio body in the passenger side of the rear trunk area that holds the first aid kit. I drilled some holes for air flow - I don't think it's going to be an issue mounted this way. I can throw the cover on and you can't tell that anything is there.

I mounted an external speaker up in the passenger footwell and then put the radio head just in front of the ashtray. I'm pleased with how it turned out and it appears to be functioning really well. The radios are just QYT KT 8900, you can get them on ebay for under $100... They are neither rugged or legal anyplace outside the ham bands.
Clearly rugged radio is just sell overpriced crap and not caring about license issues. My bet based on the 40 channels would be 28 GMRS/FRS channels, 5 murs channels and 7 weather channels. The password protected freq is a way to hide the sleeze... Anyone want to call and get the password?

Vehicle-dependent Expedition Guide
by Tom Sheppard
From $144.25From CAD$118.16

First Overland: London-Singapore by Land Rover
by Tim Slessor
From $13.4From CAD$22.5

I got the Gamiviti mount for my truck. Nice sturdy mount.

@ unusedusername, that is an amazing setup man. Lots of thought, time and coin in that setup for sure. Everything was done so cleanly man, enjoy it!

A J-pole setup we use at the desert races

Great combination. Central US to the East Coast Daily while mobile, and band tuned > 1sec

Not sure if this counts, but here is what I came up with for my UV-5R in my center console I got out of a Ford Raptor.