read the experience he had with the wheels.... that would have broken me, i may have set the truck on fire if i was dealing with that nonsense!!!!

Jupiters Travels: Four Years Around the World on a Triumph
by Ted Simon
From $17.49

In addition to a normal 12 ton jack and 2x6 blocking, I also have a hydraulic jack for an armored HMMWV - based on your wheel luck, maybe I should plan on having both jacks with me. Cheap insurance.

Hey Bob, I know where you can get another one of those HMMWV jacks, exactly like the one you have!
Last edited: Oct 15, 2018
E

The jack has a minimum lifting height of 5.75 inches and a maximum lift height of 20.75 inches, providing more than 14 inches of available lifting power stroke. The jack has been tested in the mud, sand, wet sand and on gravel slopes with a compound longitudinal and lateral grade of 7 percent.” 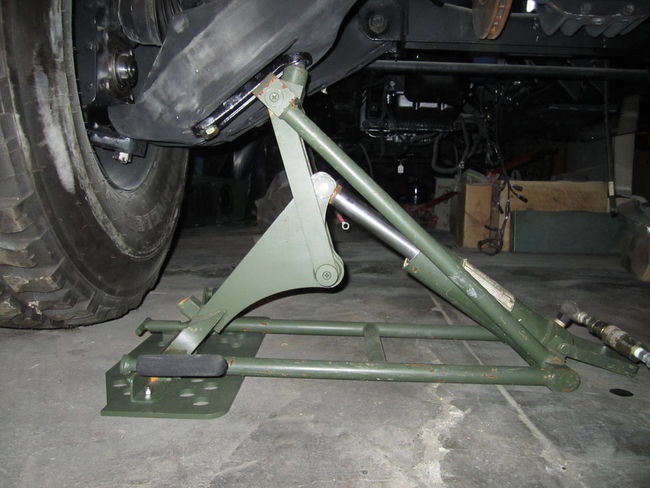 Yup - the armored HMMWV jacks are definitely a solid piece of equipment. Pat and I both have one since it is probably the solidest way to jack a vehicle that's off-road. I carry a 12 ton jack and 18" pieces of 2x6 for blocking, but I don't do off road stuff. The HMMWV jack may find a home on-board instead on on a garage shelf, though.

The problem with these jacks, especially for old men with bad backs, is the weight of it.

For a total of 74.6 lbs. Try dragging that around in the mud or sand.

Stazworks wheels. Tom replaced the original 3/8" bolts with 12 mm, according to his Instagram post.
I'm using some Hutchinson 20" wheels on my GMC Topkick - same truck as this.
Hutchinson uses 5/8" (16 mm) studs to hold the wheels together.

I like the HMMWV jack - where can I get one from please ?
Any idea what the load capacity is ?
Bob

The jacks are rated at 8500# - I attached some manufacturer's data on them. Pat & I bought ours when a bunch were released as surplus, but they still show up on eBay from time to time. Pat got one with some corrosion spots, and I wound up with one new in the box. They come with a carrying case that can only be picked up by a 20 year old soldier or two.

$399 is about what new ones sold for on eBay, plus shipping. For about $250 or so, the package may show a bit of water damage.

I paid $275.00 + $70.00 for shipping on eBay. The seller's name was 'wartimefinds', so search for him and you may find the same deal. Mine was brand new, and came with the heavy duty black carry bag. The 'corrosion spots' Bob is referring to were actually more like small rust stains with absolutely no penetration of the metal, and there was only about eight spots to deal with. I used SoS pads and a little water to practically wipe the areas clean, then sprayed a little Fluid Film on there to make sure it didn't come back. Sorry for all the detail, but I don't want anyone to think I bought a used, rusted up jack for the reduced price.

Joaquin Suave, where did you get the aluminium cradle adapter, or did you make it yourself. This is one item Bob and I have discussed and we both need. However, I need one that will fit a 5" diameter round Rockwell axle for my ambo/trailer, and I would like to have something so the jack could be used with my F250 tow vehicle also.

Bogert does sell an adapter for the bottle jacks, but it won't work with the jacks we have.

I did find these Bottle jack Kits made by Safe Jack, but their stuff is stupid expensive.

Sorry for the high jack Tom, but I figured this is all information everybody could use.

Dreaming of Jupiter
by Ted Simon
From $16.63

Would it be possible to get some photos of the adapter? Maybe a dimension or two as well? Thanks!

Hey guys. I've been back in AZ for a month now. I've been wanting to update this thread but have had more pressing duties online to deal with like figuring out the tire balancing, seat cushions, and a heater.

First I'd better get into some detail regarding the wheel drama I've gone through. For those of you who haven't seen the instagram posts or want more details, buckle up.

I left Southern Arizona about 10 days before my daughters wedding which was in Langley British Columbia over 1600 miles away. Plenty of time right, what could happen.

I made it just past Kingman, AZ when "what" happened. As I rolled into a gas station there was a massive release of air and my left rear tire went flat.

For a few seconds I was completely stumped as to why my brand new tire just failed until I saw this.

There was light shining through my wheel where it shouldn't be. Turns out when 11 bolts in a row fail the O ring lets go. Also notice the 4 missing from the other side. Lucky me, I got to use my new 54 to 1 hand crank lug nut remover again. I'm glad I threw in some blocks of wood and a metal bar before leaving. My father suggested it and I thought he was being overly cautious.

So now the decision to keep going North or head back. Being a glass half full kind of guy I went North but changed my route from the rough back roads to the more crowded and quicker way. In 50 miles I stopped to check the bolts on the right rear. Sure enough there were a few broken ones. I called John at Stazworks and he was friendly and communicative but not necessarily helpful. All I could do was replace them and hope it was a bad batch of bolts.

That was the beginning of one of the longest two travel days I've ever experienced. I had the tires under inflated to reduce stress on the bolts and I was driving under the speed limit with angry people on my butt. The whole time I'm just waiting for the tire to blow sending me into the other lane. I stopped every 50 miles to find the wheels either fine or looking like the picture above.

I stopped at two hardware stores and bought dozens of new bolts nuts and washers. At one point I was outside of Vegas working in the shade of the truck in 108 degrees. The new bolts didn't match the old ones so I also had to move the good ones around for proper balancing.

I was leaving Fallon, NV when I heard the tell tale release of air. I had been driving with the rear access door open to listen for anything strange. It was unmistakable and I had about 3 seconds to get off the road. The spare was still flat and I'd robbed half of the bolts from it for the other repairs. I was hoping to leave the right rear flat on the truck this time and just push the O ring back in and replace bolts. Nope, it doesn't work that way. You can't be sure the O ring is seated even if you can figure out a way to push it in without damaging it. There are also the wheel lugs that keep the rim halves together blocking access to the O ring. So now because I wasn't smart enough to fix my spare in the comfort of ANYWHERE ELSE I had to do it in the dirt, at dusk, with cars racing by. I separated the wheel halves and put the O ring back in place then put half the bolts back in to make sure it held air. Guess what, these bolts suck and half of them won't cut it. The tire blew at about 50psi and I'm lucky I was wrestling with the other tire at the time. 4 more bolts gone and probably launched into space but so much better than my face. So I took the wheel apart again and used all of my remaining bolts to put it back together. I was there over 6 hours leaving sometime after 11pm. The most difficult part other than getting the wheel off the hub was loading the flat tire back into the truck. I had to use two ratchet straps and alternate back and forth two inches at a time to finally get it up there.

So why did I keep driving and not get them repaired. Two reasons, I couldn't find anyone willing to help me. I made many calls in the Vegas area with no luck. I thought I had a rental space in a garage to use but then they said I was too big. Second reason is my buddy Mark in Reno. Mark is an engineer and a machinist who owns his own business. He also happens to be a fireman who drives these big trucks every day and is an offroad 4wheeling kind of guy. In short, the perfect person to help me figure out this shirt storm.

The solution, drilling, lots and lots of drilling. 180 holes with two drill bits per hole equals about 3 days of not goofing off doing something fun. We replaced all of the 3/8" grade 8 bolts with the largest bolts we could get into the space. I forgot what they are called but they have an allen head instead of standard head and they have the best tensile strength. The new bolts are 12mm thick and much stronger than the originals. The originals were junk and weren't torqued properly. In the vice they broke at around 55lbs and went a full 1.5 turns before coming apart. With the new hardware I've now driven over 5000 miles and have been looking for the rough roads. I'm happy to say that even while using the air ride seat to it's limits not one bolt has broken. This makes me feel much better about tackling the not so smooth roads in Baja next month.

A few words about John at Stazworks who made the wheels. John has been a good guy on the phone and even gave me his cell number so I could discuss issues with him. John also didn't blink an eye when I asked him to reimburse me for all of the hardware and the cost of balancing the wheels. Do I like John, yes. Would I buy these wheels from him again, absolutely not. Now that the wheels are staying together it's time to figure out how to make them ride better.