FirstGenTundra said:
Interesting to see you switch back to 650lb springs. I just added a brute force fab bumper. I've not added a winch yet but I do have skid row skids. Despite the weight my ICON coilovers with 650lb springs are doing ok. I was worried it would ride really rough with the bumper.
Click to expand...

I don't have any skids besides the factory one, and so far I really haven't needed them. And I do some pretty good trails. I just position the wheels so that if something is going to get hit it's going to be the sliders and nothing else. If I were to end up getting skids then I'd have to move back up to 700's. But with the weight I'm carrying now the 650's seem to be just right.

Kpack said:
I don't have any skids besides the factory one, and so far I really haven't needed them. And I do some pretty good trails. I just position the wheels so that if something is going to get hit it's going to be the sliders and nothing else. If I were to end up getting skids then I'd have to move back up to 700's. But with the weight I'm carrying now the 650's seem to be just right.
Click to expand...

Well I'm going to order a winch as soon as I find a decent deal. I'll report back once I have it installed. I'm going with a synthetic line to save weight. I'm hoping I can continue getting by with 650lb springs.
M

@Kpack
By the way how is your fan mod working out so far?
Im thinking of installing 2 fans to keep the temp down when idle or in the hot desert.

Has it been effective lately?

Overland: A Mercedes-Benz Journey Through the Americas
by ri M. Stroh
From $20From CAD$47.18

migx333 said:
@Kpack
By the way how is your fan mod working out so far?
Im thinking of installing 2 fans to keep the temp down when idle or in the hot desert.

I've used the fan a couple of times lately on trails just to see if it would make a difference. Sometimes my trans temp will climb up (torque converter) and I'll flip the fan on to see if it comes down. I don't typically see much of a difference, partly because it's the torque converter that heats up and not the trans pan temp. I believe the trans cooler is connected to the trans pan, so you won't see a big difference in temps. What it has helped with is my power steering. I had installed a larger cooler and placed it behind the aux fan. Before that my power steering pump would start whining like crazy about halfway through trails because the fluid would get so hot. The larger cooler has helped, and if it starts to whine I turn the fan on and it seems to help.

The aux fan is mostly useless at normal driving speeds because it just can't move enough air to match 70mph wind that gets forced through the radiator.

My friend and I spent the afternoon yesterday doing a few trails in Liberty WA. Pit Overlook (4W321) was first, a mostly mild 3.5 mile trail with fantastic views. There are some narrow shelf roads with steep drops off the passenger side, then some moderate hills and elevation gains. Nothing too crazy, but fun to do. 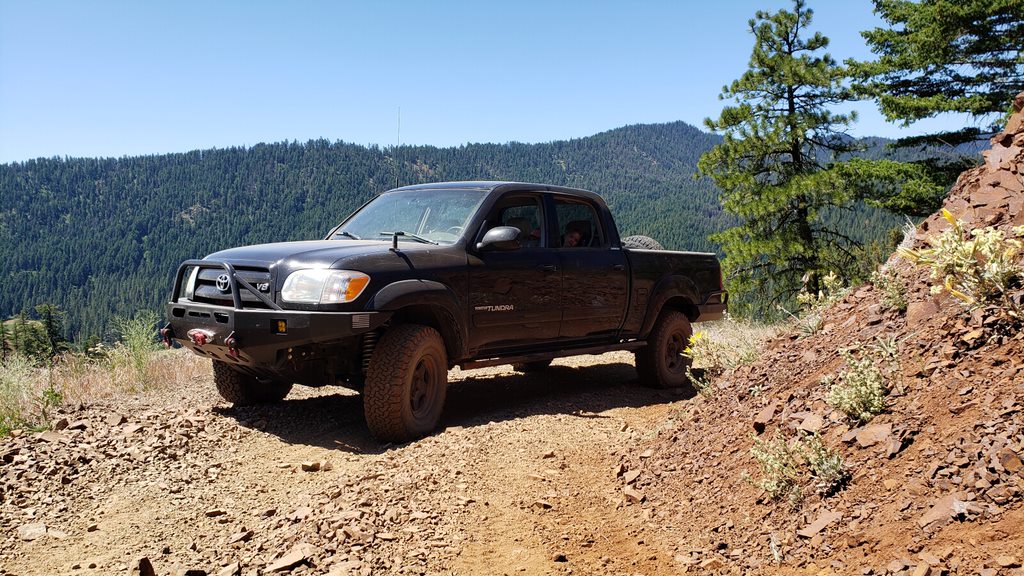 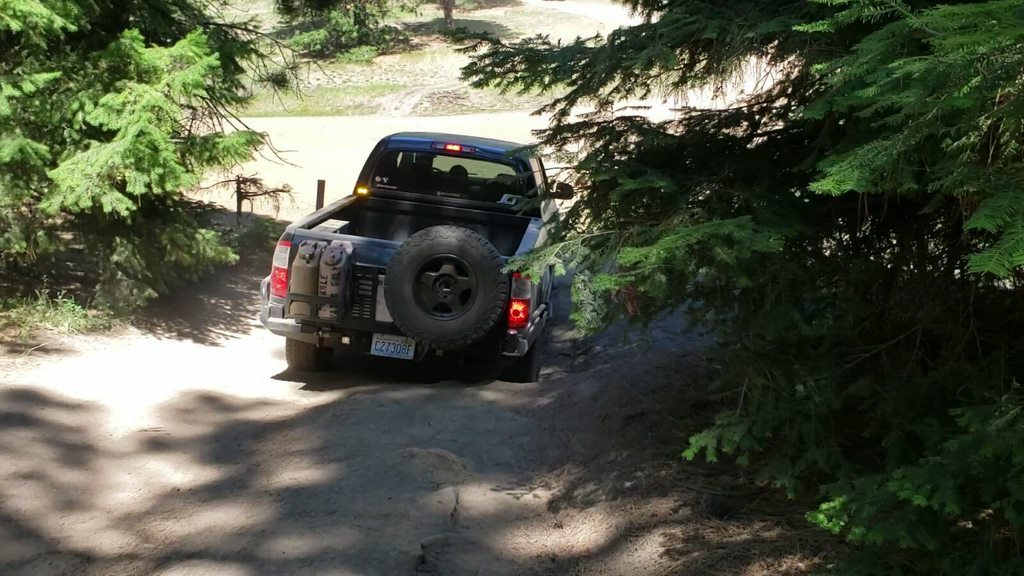 That trail ends at the middle of the Crystal Ridge trail (4W319), which I've documented here before. This put us just about a 1/2 mile before the aptly named "Rear End Hill", which is a sometimes hair-raising slog up a very long, very steep slope. Rather than twisting up the mountainside, the trail just goes straight up it, which puts much of the trail at a 30-35 degree incline. Add in loose dust, some rock ledges, and slick tree roots. It's always a fun challenge to get up to the top. 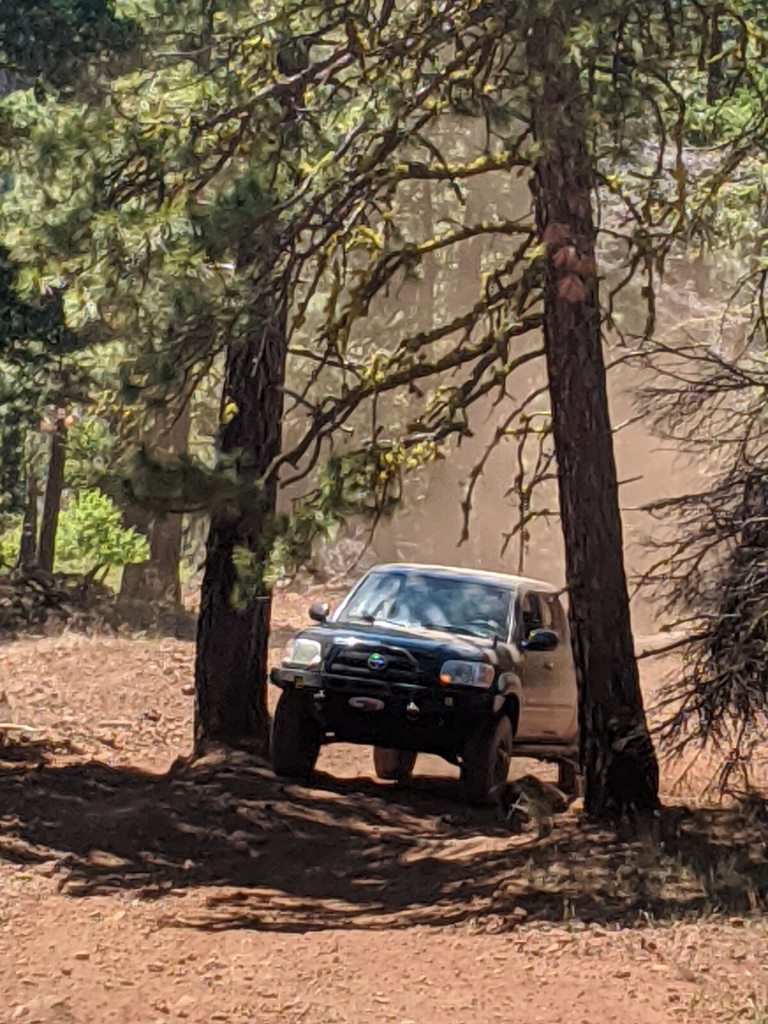 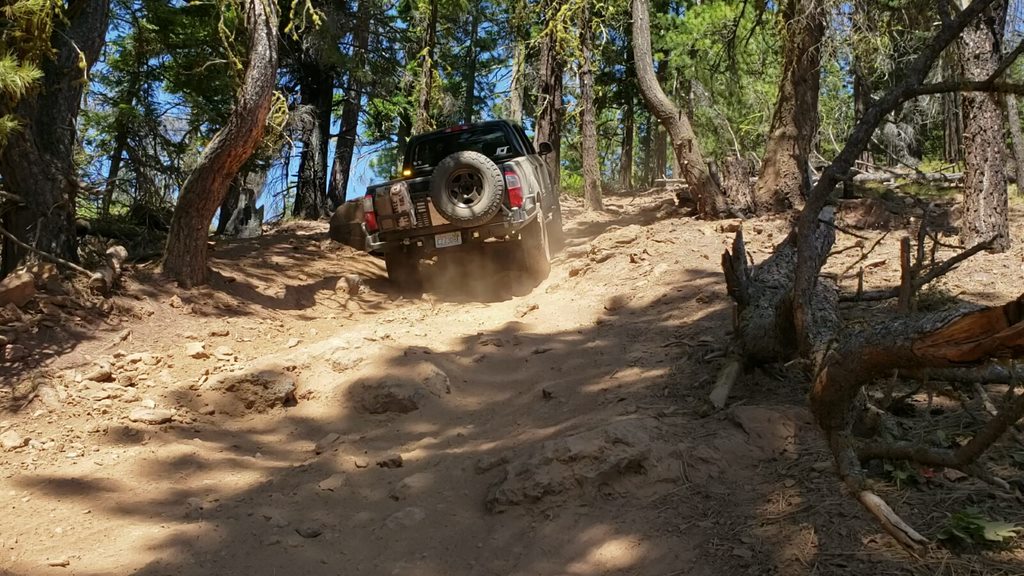 The highlight of the trail is the Crystal Ridge lookout, a cliff that offers incredible views of the Stewart range and beyond. It was an especially clear day and we could see for dozens of miles. 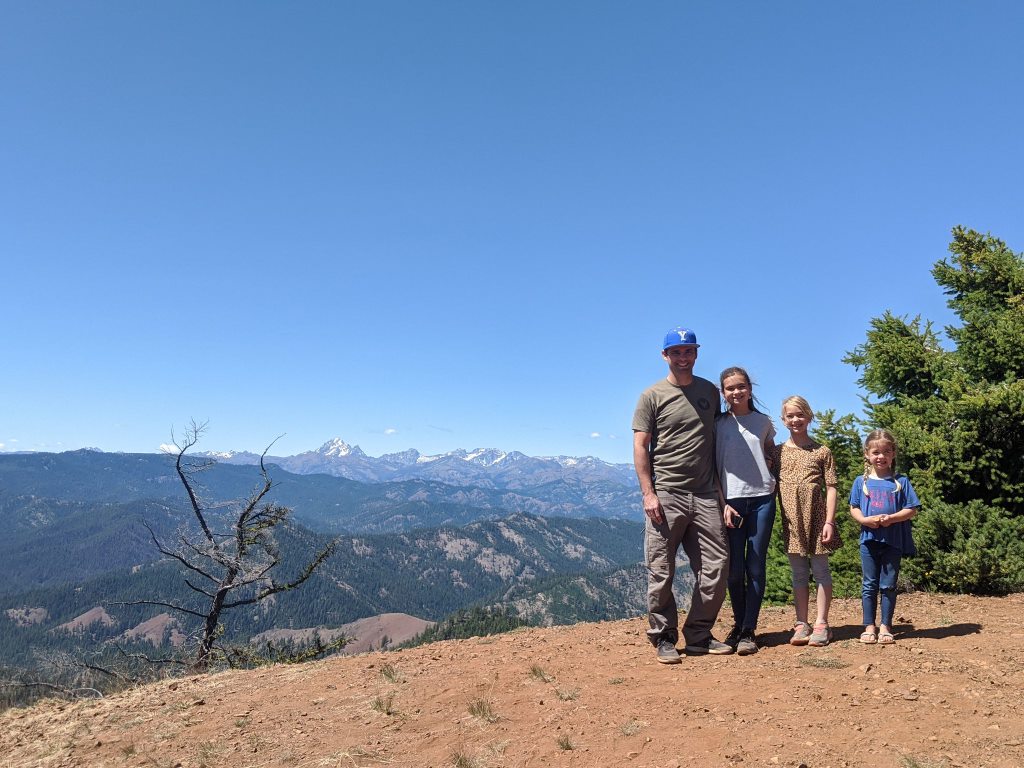 Towards the end of the Crystal Ridge trail, there is a turn off to a little-used trail that we had no information about, the Hidden Gulch trail (4W320). My friend and I decided to check it out and see what was involved. It dropped down into a valley, through some meadows and followed a small creek. That meant that we crossed it several times and there were some sketchy areas with mud pits. We took our time and walked each obstacle to be sure we could do it. By this time my girls were tired of being on the trail so we tried as much as we could to keep things moving.

Thank goodness for high clearance on the rear. This is the first time I've ever had my bumper touch. 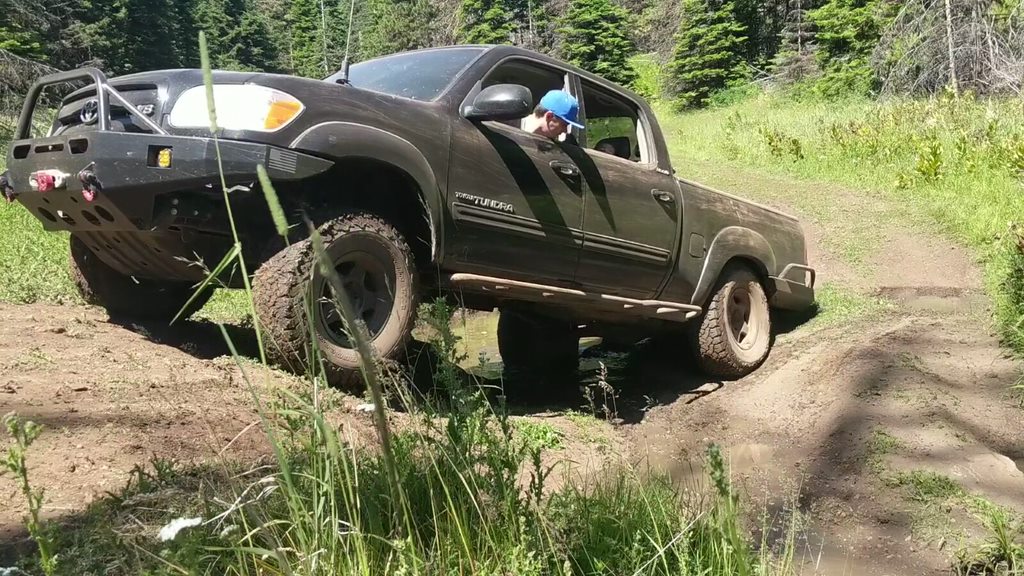 One of the mud pits 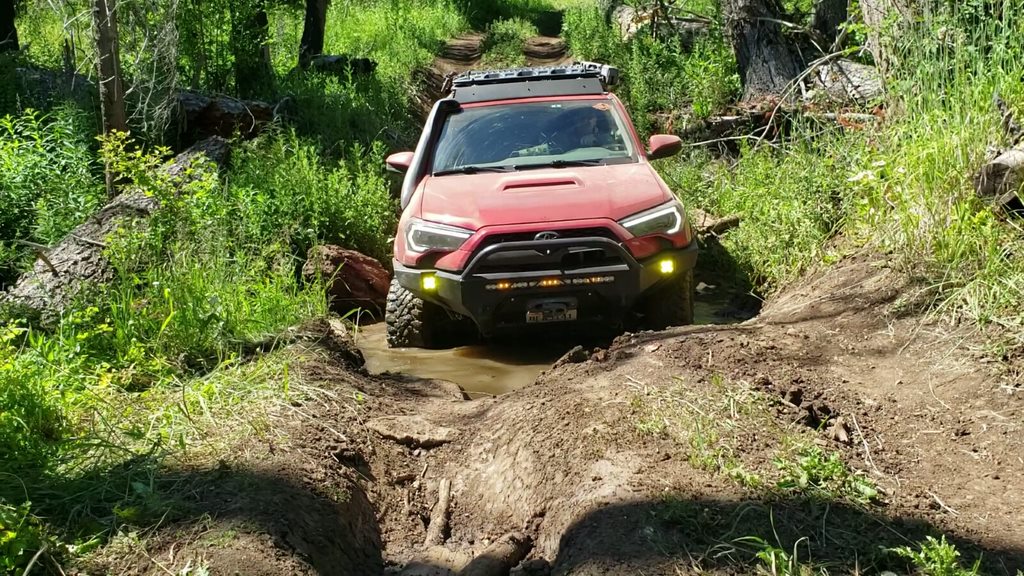 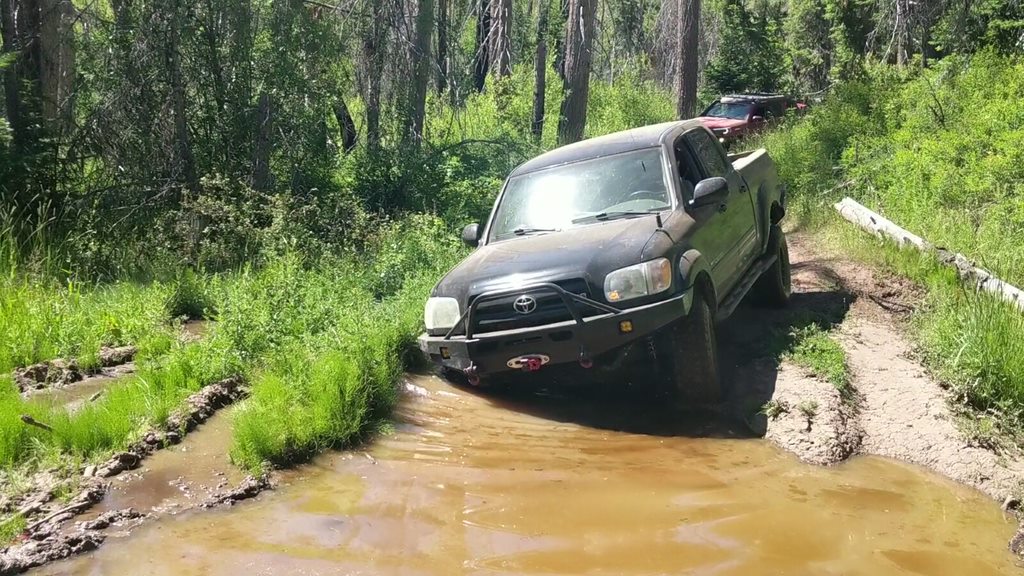 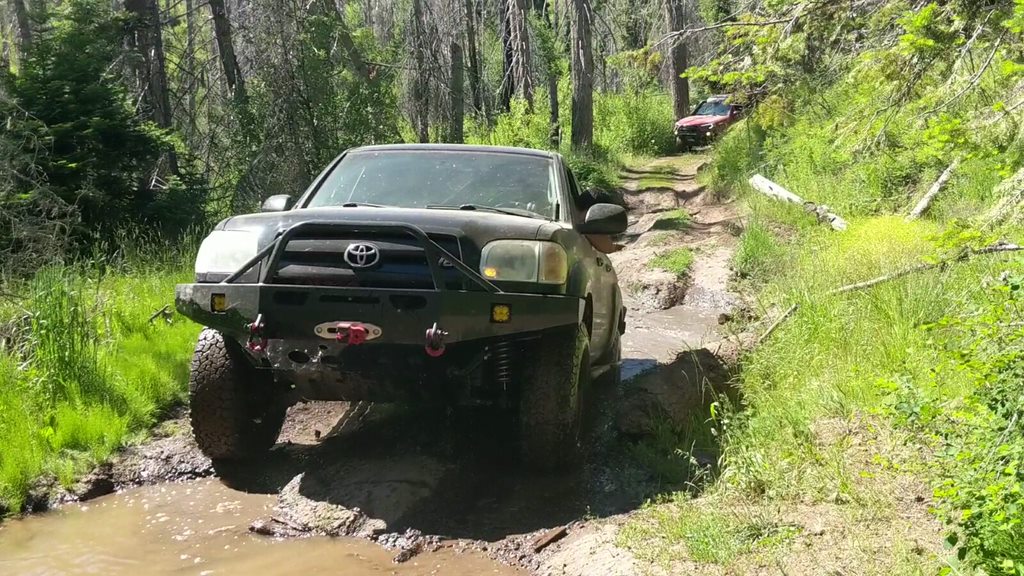 The trail eventually wound up ending at a spur Forrest Service road, which is good because we really had no idea where the trail ended or if it was even all passable. From there we headed back to Ellensburg with dust covering every inch of the interior of our vehicles.

The truck performed flawlessly again. No issues at all. The longer wheelbase make some obstacles easier and some more difficult, but I'm always surprised at how capable the truck is. The rear locker is a must for some of these trails. I would risk a lot of potential damage if I did not have it. The suspension is working as expected, though I do need more travel in the rear. Besides that I don't have much to complain about.

Video for the above outing put together by my friend. Enjoy!

Gnarly mud sections. I am not sure I would have gone thought that.

smokeysevin said:
Gnarly mud sections. I am not sure I would have gone thought that.

We hesitated when we saw the first one. But after walking it and using sticks to probe the depth of the water and softness of the mud, we decided that it wasn't too bad. Thankfully the bottom of the pits wasn't gooey mud. It was maybe an inch of silt, then hard, so it gave us more confidence. After the first pit there was nowhere to turn around so when we got to the series of three pits we had no choice but to push through. I would not do this trail unless the hills were dry like they were on this day. If the rest of the ground was wet this trail would be a nightmare.

Hit another trail last week, though I don't think this one has a name attached to the number designation. And I don't remember the number either. Whatever it was, it was intense. If you like really steep hill climbs, this one is for you. There was something like 6 or 7 big hills, with one of them being pretty sketchy.

The first 100 ft of the trail drops down into a creek that has tank treads to get you back up the steep slope on the other side. That was a good indication of the rest of the trail. We immediately entered off camber sections and steep hill climbs. 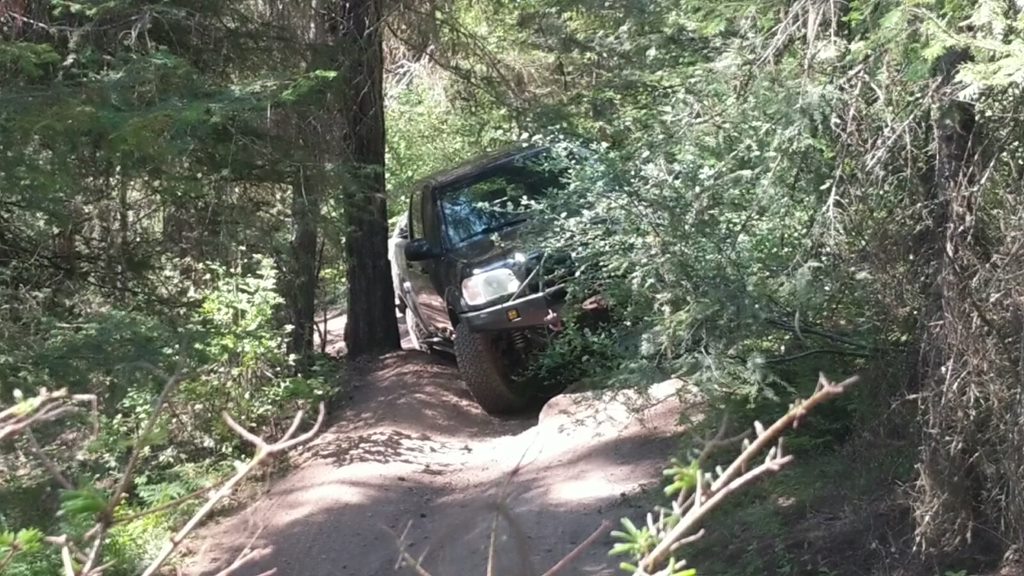 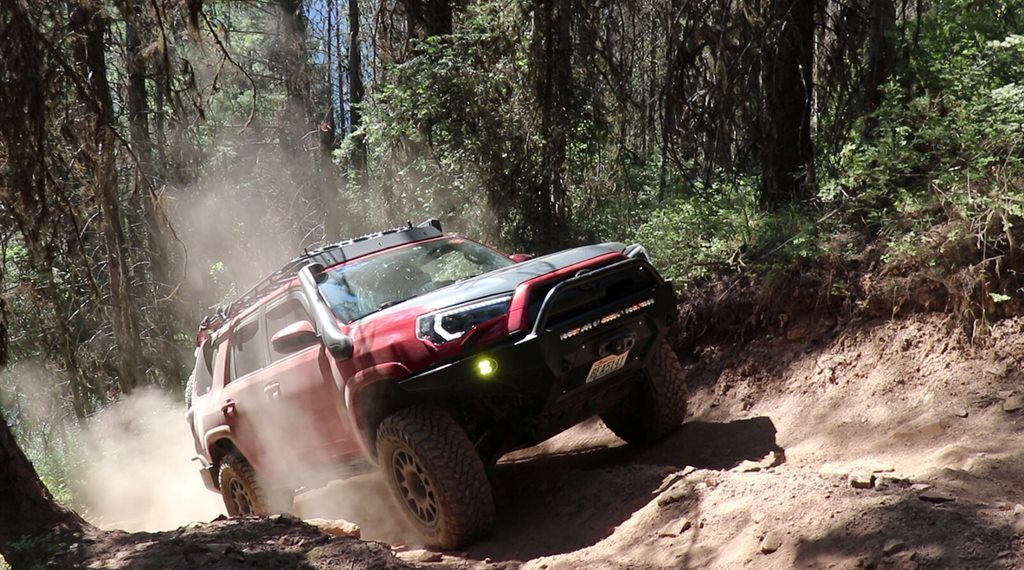 Of course pictures and videos don't show the steepness very well. On our phones we measured upwards of 35 degrees on a couple of spots, some close to 40. This one was close to 35 but you can't tell from the picture. It's steep enough that you can't stand up on it without sliding down the mountain. 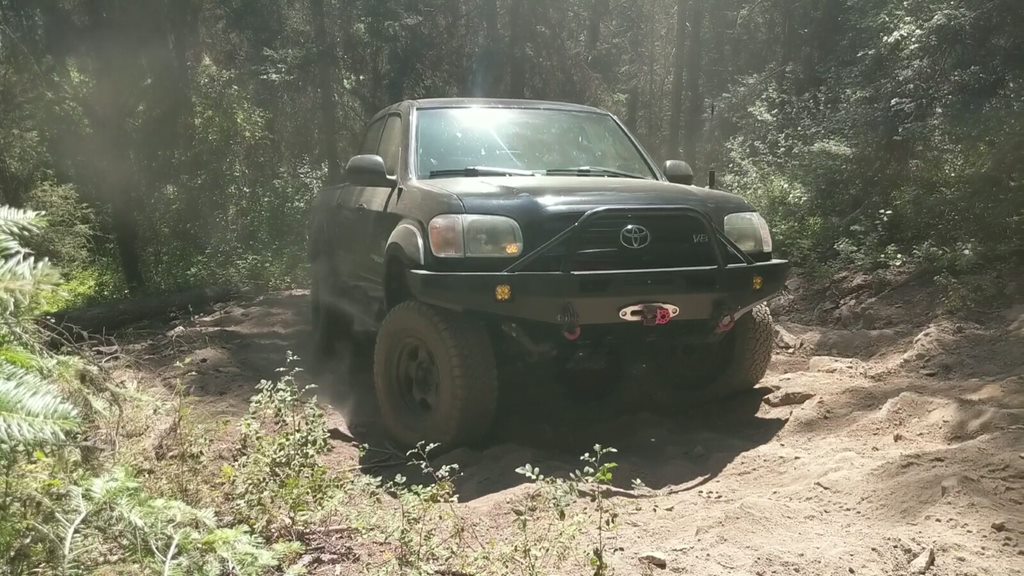 Some fun smaller obstacles scattered throughout 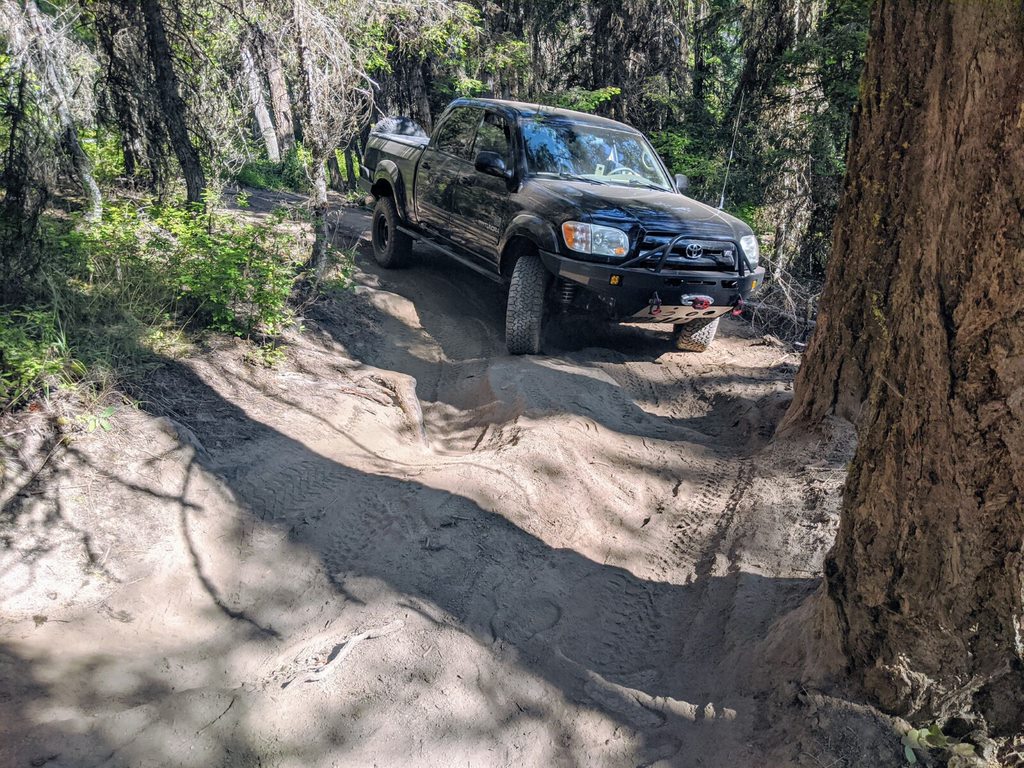 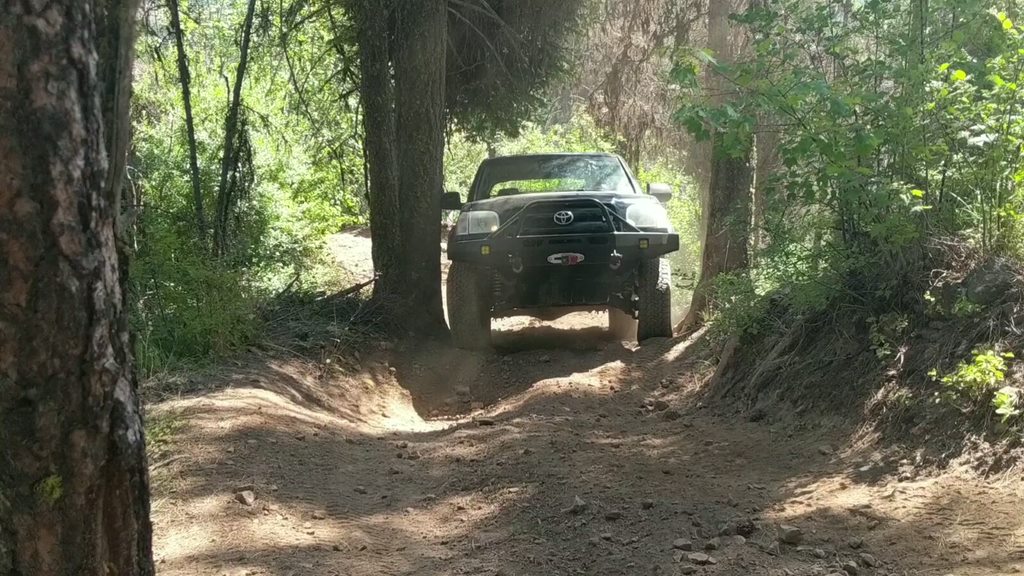 And the crest. About a 25 degree up to the peak, then immediate 40 degree down. He scraped even with his short wheelbase 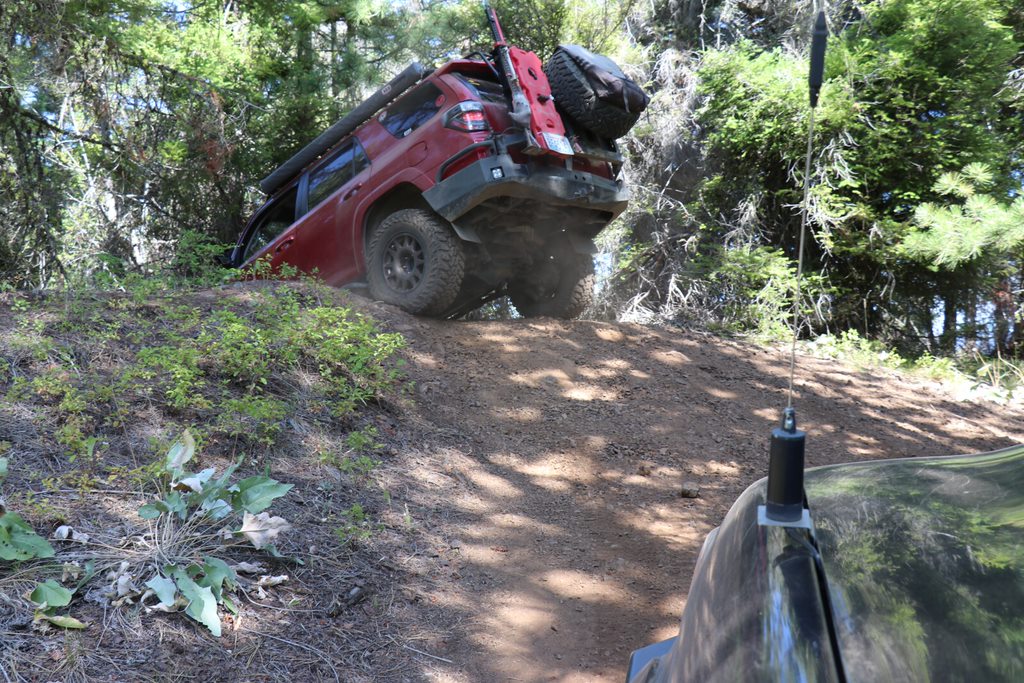 And of course I got stuck. This is where a long wheelbase comes back to bite you. I thought I had taken a good line, but I was totally wrong. 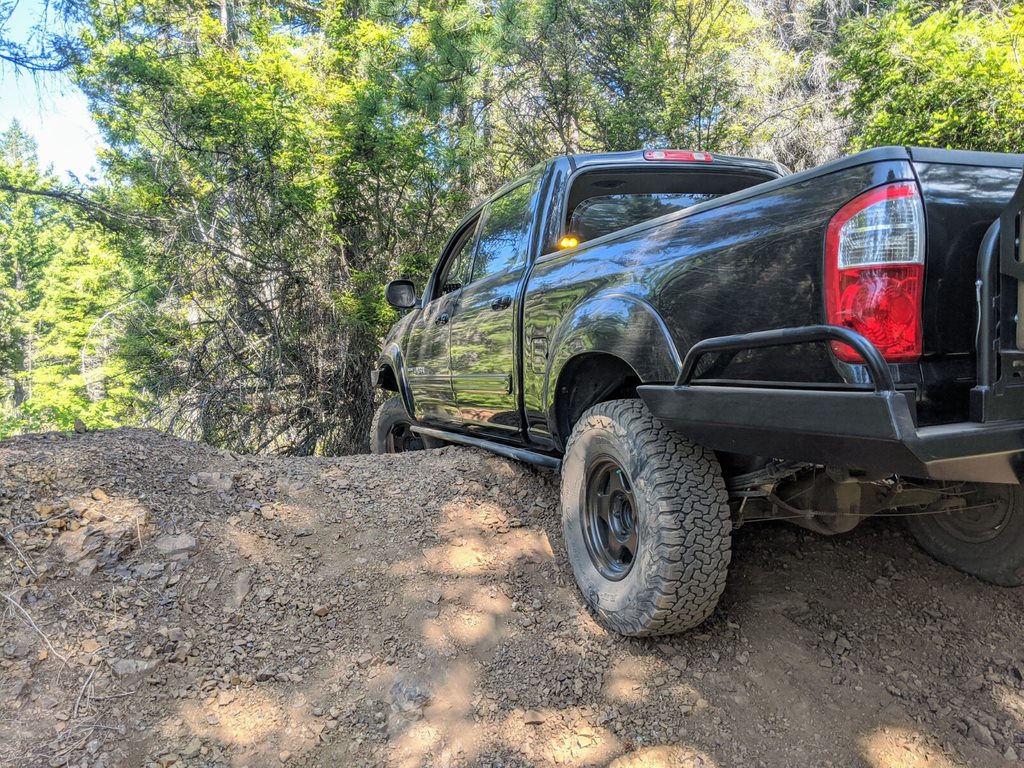 On the plus side it means I got to finally use my winch. It got me pulled off pretty quick, and a thorough look under the truck showed heavy scrapes only to the driver's side rock slider, with some scraping on the frame rail. No damage to driveline or anything else. 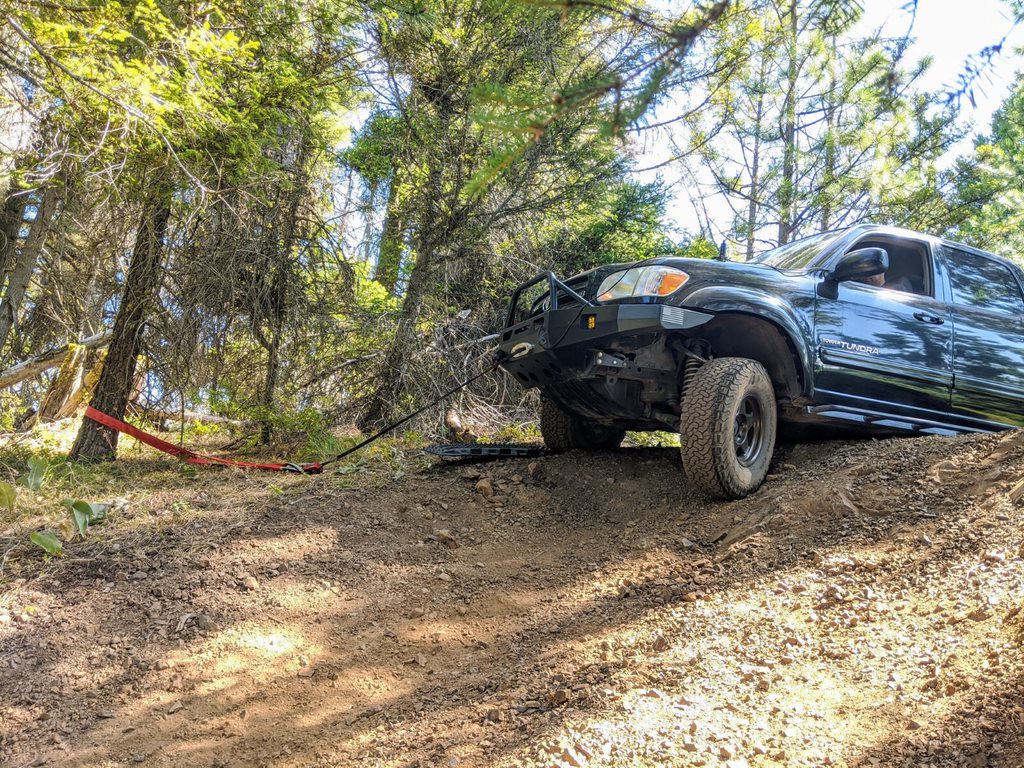 After this the rest of the trail was more mellow. Great for pinstriping 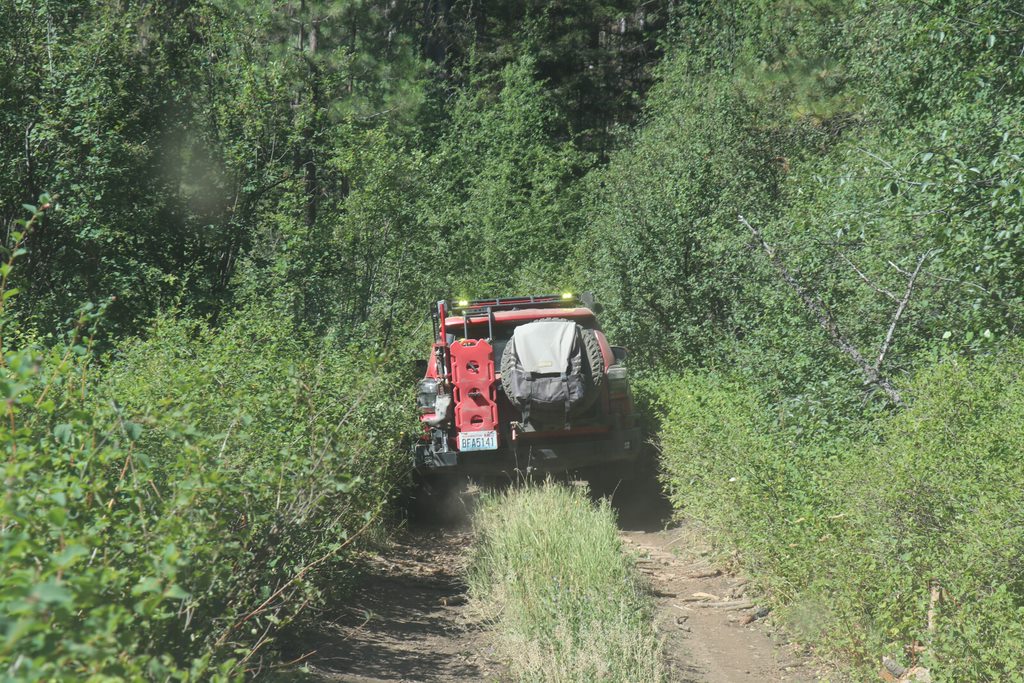 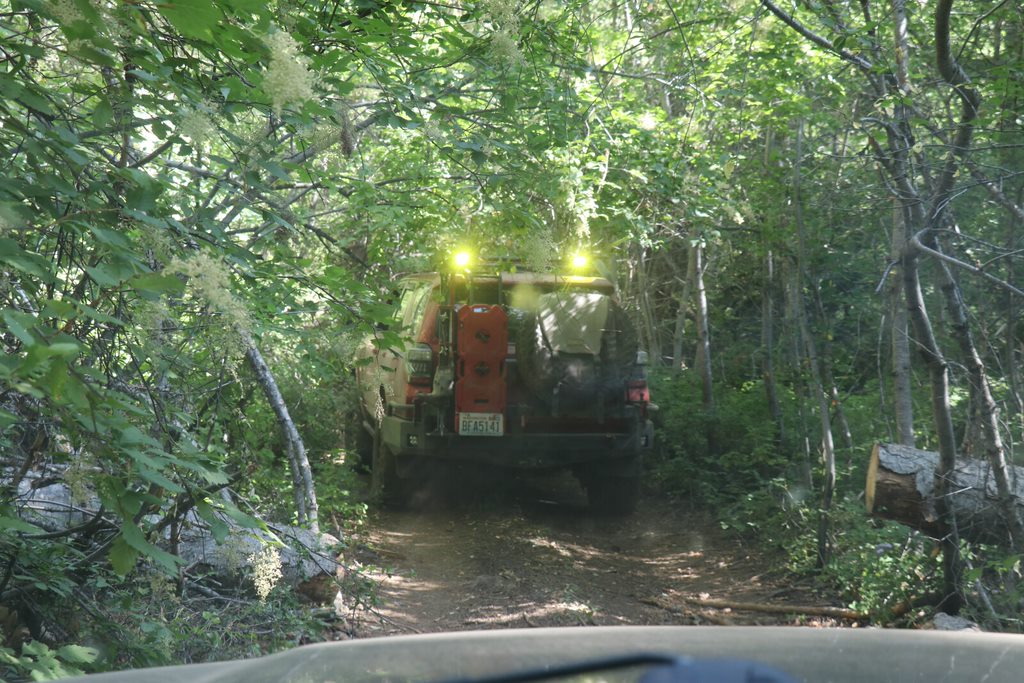 Eventually we reached the top of the mountain (after jumping on several different trails and FS roads) and hiked up to Red Top Lookout at over 5300' elevation. 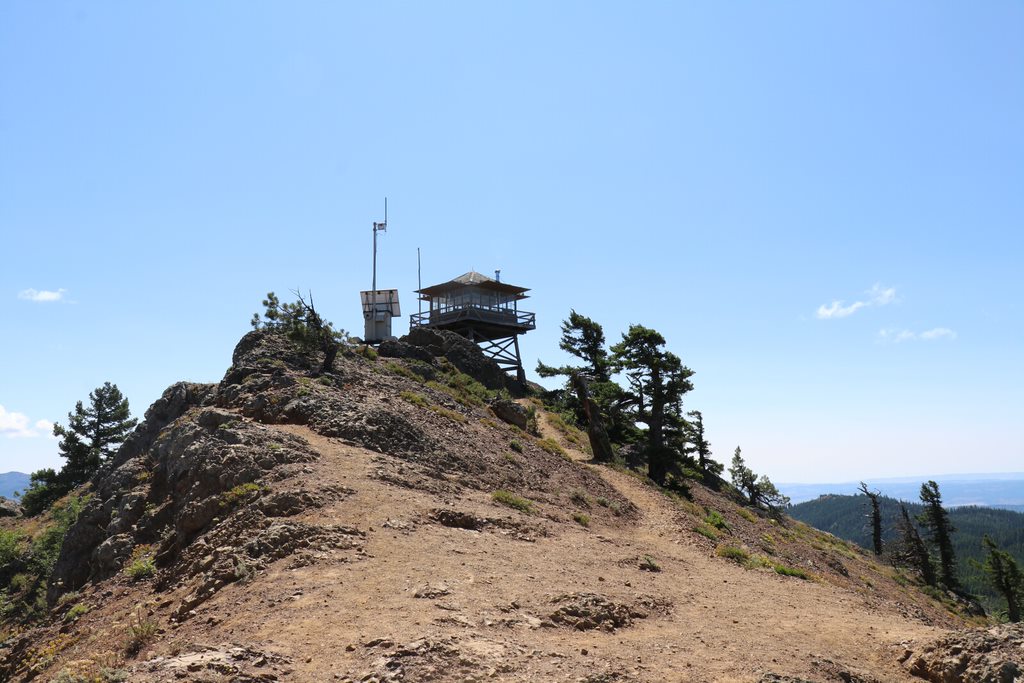 The views were spectacular in all directions. You could see for dozens of miles. 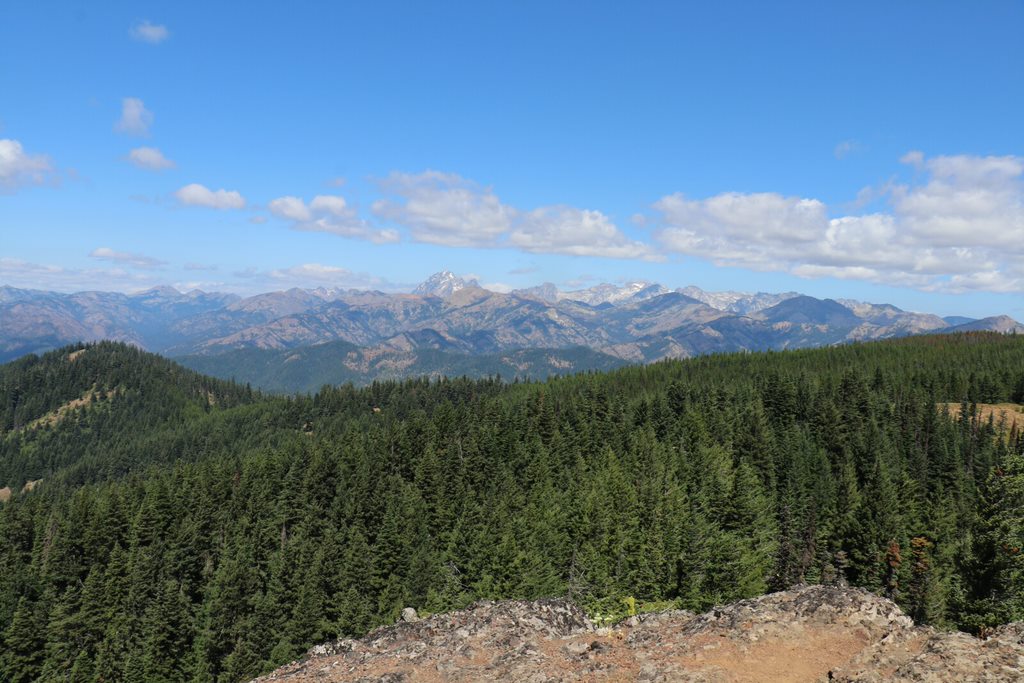 After this we took a leisurely route back down the mountain on FS roads and called it a day. I have maintenance I need to get done on the truck now before I get too crazy with it. Diff fluid ought to be changed with all the steep climbing I've been doing lately (and towing) and I have something on my front end that it creaking now when I turn. I need to track it down and replace it.

Wow this is beautiful, I'm all about those views! I have not run these trails and will put it on my to do list. That 4runner is pretty legit too. Glad to see these trucks out and about, I'll have to keep an eye out for you all.
C

Just read through the whole thread and there is so much great information here. Both general and specific to this generation Tundra. Thanks for taking the time to detail all of your experiences--I'm sure it will serve the community for years to come. Also, its great to see the terrain you are exploring and this beautiful part of the country.

Cycling the Great Divide: From Canada to Mexico on North ...
by Michael McCoy, venture Cycling Association
From $9.99From CAD$20.89

Chico said:
Just read through the whole thread and there is so much great information here. Both general and specific to this generation Tundra. Thanks for taking the time to detail all of your experiences--I'm sure it will serve the community for years to come. Also, its great to see the terrain you are exploring and this beautiful part of the country.
Click to expand...

Thanks for taking a look. That was my hope....that somehow my experiences would be able to help others with their builds. Glad to know that it's helping.