What are you using for a coffee maker and coffee brand when camping/overlanding?

CSG said:
Yes, that's the one. I prefer plastic for travel but use them at home as well (over the ceramic version). However, I would use #4 filters, not #2. The reason for #4 filters is they are cheaper (about a penny each in bulk) and extend past the top of the filter holder giving you a little room for more water during the pour. I don't like anything that requires dumping grounds and cleaning (like the screen filters or French presses). With the Melitta, you remove the filter with the wet grounds and toss, done.

Once again, I'll post this photo of me preparing a mug of coffee. You'll see a Melitta filter holder, #4 filter, set on an Ozark Trail 20 oz mug. Water is being heated in the small kettle on a butane burner (which I use far more often than the two burner cooktop in the van).
Click to expand...

Thanks, I will keep that in mid if I decide to pick one of those up.
I really do not mind using the Aeropress though.

SportsmanJake said:
The product of what comes out of an aeropress is essentially coffee concentrate. You must add hot water to it if you are trying to replicate a typical cup of drip coffee.
Click to expand...

Thanks, I should try taking a sip of the concentrate some time before adding extra H20 to the cup

Corey, spend the $4 and then you'll actually know.

CSG said:
Corey, spend the $4 and then you'll actually know.
Click to expand...

I just realized my Sequoia has a 110v outlet stock so I may step up my coffee equipment depending on how many people are in the group.:coffeedrink:
S

I have a french press that is supposedly unbreakable for times when weight and space are premium, I used it a lot when I was kayak or skiff camping back in Florida. If weight isn't an issue then I prefer a percolator. I've never had a camp stove so a campfire is always a must! As for beans I go with whatever Organic whole beans I can find on sale.

I own a coffee roasting company, so my own coffee, usually with an aeropress out on the trail.

I know it is a long way to go to WV for coffee but if you post that it is your company, give us your website (if there is one). Some folks are willing to experiment. 2 cents

krick3tt said:
I know it is a long way to go to WV for coffee but if you post that it is your company, give us your website (if there is one). Some folks are willing to experiment. 2 cents
Click to expand...

It won't let me post links for some reason. This is the url: greenbriercoffee.com

CSG said:
Corey, spend the $4 and then you'll actually know.
Click to expand...

Instead of firing up the Kuerig this coming Saturday, I will try one of these out.
They both came with a few #2 filters too.

Got the twin pack of both so I can have one in the home, and one in the chuckbox.

I used to be 100% against a french press, simply because it was an extra item. The way I understood it you needed the container to heat water in AND the press to make coffee. 2 items, unrelated, and 1 of which is only useful for it's one job. It sounded like a big mess and I am not enough of a coffee snob to be bothered with it.

That being the case I preferred to stick with the good ol' percolator, at least it's guts stayed inside and it doubles as a good water pot if needed.

Then I ran across this by accident, really liked the design, and got it.

I've used it around the house to make coffee and love it, haven't camped with it yet but I already see it as a huge improvement over the percolator. It's smaller, it's self contained, should be easier to clean since it's fewer pieces, it makes 30oz which just so happens is exactly the size of my travel coffee mug, so less wasted coffee from me being overzealous with the water. (Not as good for sharing though.)

The pot can be used for heating anything by itself (can of soup or such), the press nests inside, and when you make the coffee it's all self contained. Only thing I don't like is it spills all over if you get in a hurry pouring, and I found a post by another user here pointing out it's the design of the spout at fault there and they supposedly fixed it with some minor filing to the lip.

It is a french press but without the key feature I hated about a french press, the separate hardware. Heat the water to almost boiling, spoon in some coffee, let it sit 4-5 minutes, stir again, slide in the press. It also keeps the water hot because you are not transferring it around and can keep the lid on it.

As for coffee, I like New England Breakfast Blend when I can find it. Work used to supply it for us in the office, and I got used to it, then they took it away for some cheap crap. I use Community coffee more now as places seem to carry it. Overall I'm not too particular as long as it's just regular coffee and contains caffeine. 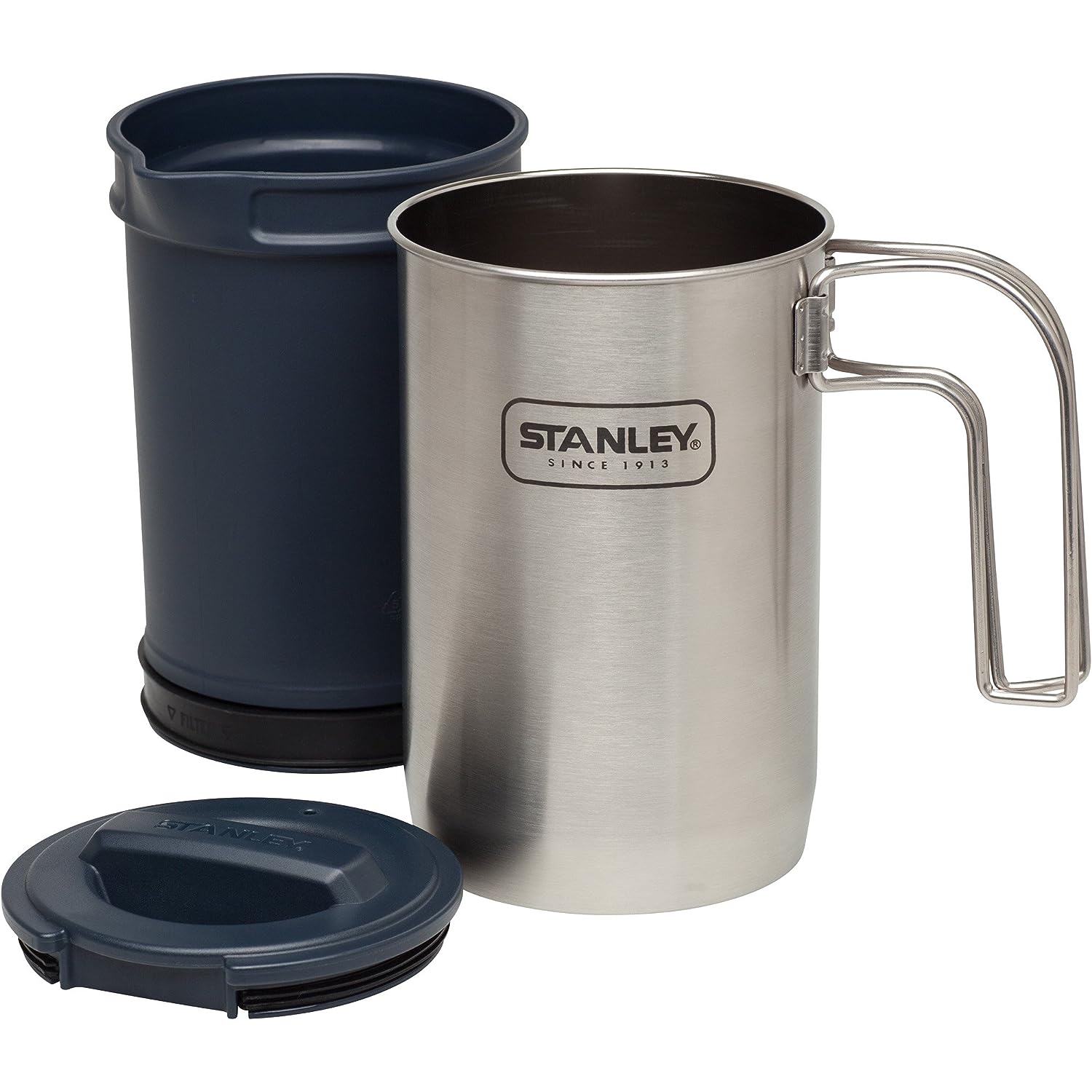 SS press, old SS coffee pot no guts,and coffee it's a done deal.
The only thing more simple, cowboy coffee, however I prefer the SS press.
No filter to buy and store or discard or coffee filter thingy to clean.

After rereading my comments, there might be a little laziness creeping up on me...oh well.
Cheers..

I took some of that Overland Coffee you can see in my chuckbox picture above, and made a cup.
I still had some ground up from last August in the fridge.

I boiled around 12 oz of water, used one of the number 2 filters, and wet the beans with hot water for around 30 seconds.
Read that on Google to make the bean off gas.
After that I slowly poured in the remainder of the water, and watched it drip.

I must say it was a very great cup of coffee for ground up beans in the fridge, and there was hardly any mess to clean up.
Less of a mess than using the Aeropress since you pick up the filter and toss it in the garbage.
The pourover itself just needed a rinsing. Most of the time I'm using an Aeropress when I camp and when I backpack I just take Starbucks Via packets. Sometimes I get fancy and bring out the full manual Espresso setup.