Set the endplay, installed the bearing and seal, and torqued down the output collar nut. The bearing I ordered was the wrong size (30mm ID instead of 32). Someone will be getting an angry email. I pulled the bearing from the sprinters trans. It was in good shape, so I flushed and installed it. Its will have an easy life with no driveshaft hanging off it.

Hopefully it will never come apart again. Of course now I need to call Jen any time it needs moved. Its just not safe to even tip it over, to much aluminum casting to break. I am still waiting on the sleeves for the valve body. Hopefully I will have those tomorrow, and I can get the valve body bolted on after work.

Is the subframe out for fab? (or did I miss that?)

brian94ht said:
Is the subframe out for fab? (or did I miss that?)
Click to expand...

Probably getting all the components together for mockup to double check the model before fabrication. The a-arms were just fitted to the knuckles with balljoints, springs and dampers are inbound shortly, driveshaft bits are coming together...

brian94ht said:
Is the subframe out for fab? (or did I miss that?)
Click to expand...

Mwilliamshs said:
Probably getting all the components together for mockup to double check the model before fabrication. The a-arms were just fitted to the knuckles with balljoints, springs and dampers are inbound shortly, driveshaft bits are coming together...
Click to expand...

Nope, didn't miss it. I had a few months to burn while my shocks took the slow boat from China. Once they show up, I can finish all the fiddly bits, and get some quotes for steel.

None planned. My primary reason is driveshaft length. I am already near the max length for a single piece driveshaft, adding a carrier bearing would significantly add to the complexity. The second reason is lack of need. I have good angles to begin with (no CV needed), and the added expense/complexity has little benefit for my usage.

The 242Ds output shaft is large diameter (32 spline), and has no narrow point (like the 231/241s with speedometer gear), so there isn't a present strength issue.

Slip yoke eliminator moves the slip portion of the driveline from within the transfercase tailshaft housing to the driveshaft. No carrier bearing, double-cardan or CV necessarily required. If you're that close on length, a carrier bearing and two-piece shaft might get you to that happy land of equal length driveshafts front and rear? (Front being front, rear being rear-half of the rear)

In the event of a rear driveshaft failure, your case will leak out of its output shaft. A slip yoke eliminator wouldn't.

Just a thought. I assumed you'd reasoned out your position. Well done.

I was primarily trying to avoid a 2 piece driveshaft if possible. Fewer Ujoints, no carrier bearing. If the driveshaft goes over about 74". many shops won't make them that large, as the balancing machines usually aren't big enough. I am pretty close to that now.

The risk of a driveshaft failure with 1350s is probably low enough, but that is a risk.

The other issue was cost, there is only one outfit that offers a SYE compatible with the 242, and it would be ~$650 plus whatever extra adding a slip joint to the rear shaft would cost.

I received the sleeves for the valve body yesterday. Had some stupid moments putting it together, but I should have it assembled tonight hopefully. Going to aim to get it installed on saturday if the weather holds.
L

switch to an aluminum rear shaft, much better for the long runs, I struggled with my two piece and found a factory silverado 5"dia. aluminum shaft that fit perfectly.
B

Valve body back together, trans buttoned up. I put the wrong piston in one bore, and had to drill it to lever it out. Ended up pulling the valve body halves apart. I used the spare piston from the jeep valve body. Major pain. 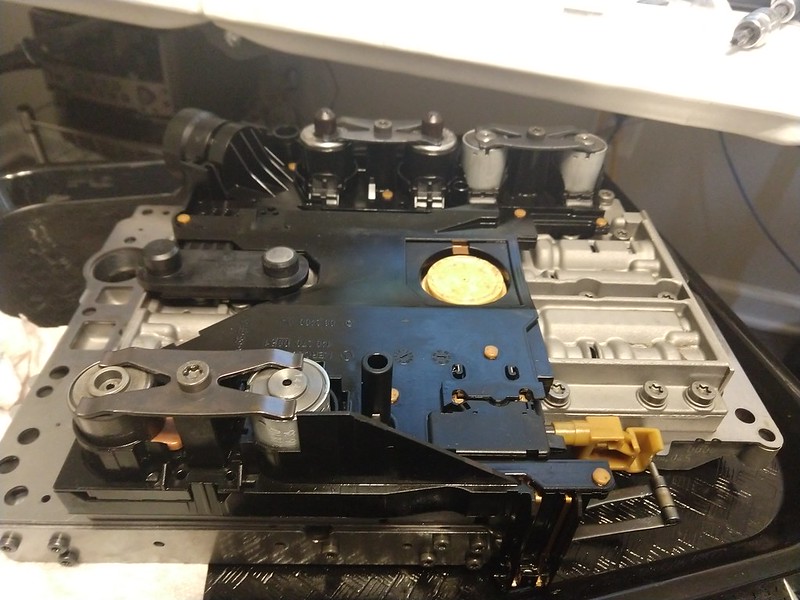 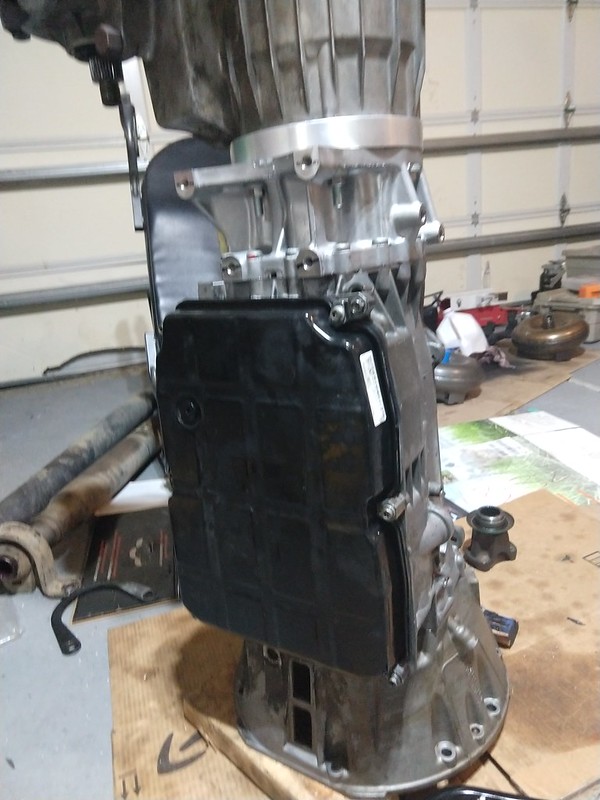 Now I just need to wrangle it back onto the engine, and get the fuel tank and support ironed out. Assuming its not raining, I will probably unhook the fuel tank and move it back some, and go at the trans. Going to suck getting it back up there I think.
B

I have swapped a tranny with 5 ratchet straps before. It was actually pretty easy, just time consuming.
L

I have this: https://www.harborfreight.com/2000-lbs-low-profile-transmission-jack-60240.html I bought a few years back when it was only $260 and used the 20% coupon to shave some off of that, it is an absolute godsend for doing one man trans work, I've installed 3 allisons with it on my own..
They do have a smaller verion for about half the price that should work for you

Len.Barron said:
I have this: https://www.harborfreight.com/2000-lbs-low-profile-transmission-jack-60240.html I bought a few years back when it was only $260 and used the 20% coupon to shave some off of that, it is an absolute godsend for doing one man trans work, I've installed 3 allisons with it on my own..
They do have a smaller verion for about half the price that should work for you
Click to expand...

Nice unit. If I end up struggling with the current unit, I may just go that route. I may have to learn the hard way... I generally try to avoid swapping transmissions, to much time on my back!

I got my shipping info from Fedex, shocks should deliver next Wed. Here's hoping nothing major needs changed in the design. I will work on the design that weekend, but I won't send for cutting until I get the trans and fuel tank figured out. Just on the off chance I need to order some brackets or even a custom cross member.

The box is over 60lbs! The subframe is going to be a dirty bastard to move around the shop with all the parts bolted to it. I may need to make a custom dolly to hold it.