Now, I'm not a Landy guy myself, but a good friend here at work has an LR3.
I know they like to do things a bit... differently over there on the other side of the pond, but he hit me up with a real head scratcher:
Evidently, his mechanic told him that the LR3 needs some sort of special lug nut. That it can run on non-OEM/Dealer lug nuts, but that he really needs to get them swapped back to factory lug nuts as soon as possible.

Maybe I'm missing something here, but is there really something special about LR3 lug nuts, that can't be had by anything other than OEM? (at $10+ a pop, that's a strong incentive to go another route)

Sounds to me like he needs to find another mechanic, but I wanted to toss this one out to the pro's first.

Thats a OEM LR3/RR sport lug nut... the design is much different from most other manufacturers lug nuts. The clamping force is applied through the large flat washer about halfway down the length of the nut, to a flat machined surface on the wheel. In addition, the narrow internally threaded end of the lug nut acts as a pilot into the wheel to center it on the studs.

Most other makes and most aftermarket wheels/lug nuts use a tapered end to clamp and center the wheel: 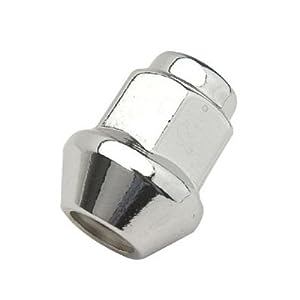 The designs are NOT compatible and interchanging them would be very dangerous...

You might notice the small taper on the tip of the LR lug nut. That is there for use with the (stamped steel) spare wheel, which is clamped to the hub in the "traditional" tapered fashion.
A

Looks very much like the factory lug nut from out 83 Dodge Mirada with alloy wheels. I recall they were rather pricy to replace OEM.

Cragar and Lund make a similar style as a "drag racing" nut with the washer.

They look similar to the ones I used for my FJ Cruiser wheels.
A

4x4x4doors said:
Looks very much like the factory lug nut from out 83 Dodge Mirada with alloy wheels. I recall they were rather pricy to replace OEM.

Cragar and Lund make a similar style as a "drag racing" nut with the washer.
Click to expand...

Something tells me that while they might look similar, I'm not sure they'd be interchangeable...


Fivespddisco said:
I can get them for you at $5 each
Click to expand...