So it all starts with the fact that more and more campsites in Europe have a 'no charcoal BBQ' policy. Bummer

When Snowpeak come out with the grill burner, I bought it to at least have some BBQ possibility whilst camping. I am talking about this: This was the second revision of what was first a gas BBQ. Now I am quite fond of cooking with a plancha to get a nice crust on my food, but there is definately something different about grilling and using a griddle.
I wanted to take the grill burner and make it fit for grilling (while not losing the griddle function). This involved making something of a diffuser to avoid direct flames and spread the heat better and using an alternative grate. I tried just using the stainless grate from the BBQ box but decided to get something else.

First the diffuser. On my bucketlist is learning how to weld stainless but for now I had to bend and just attach some stainless L profile to cover the burners. I'm sorry 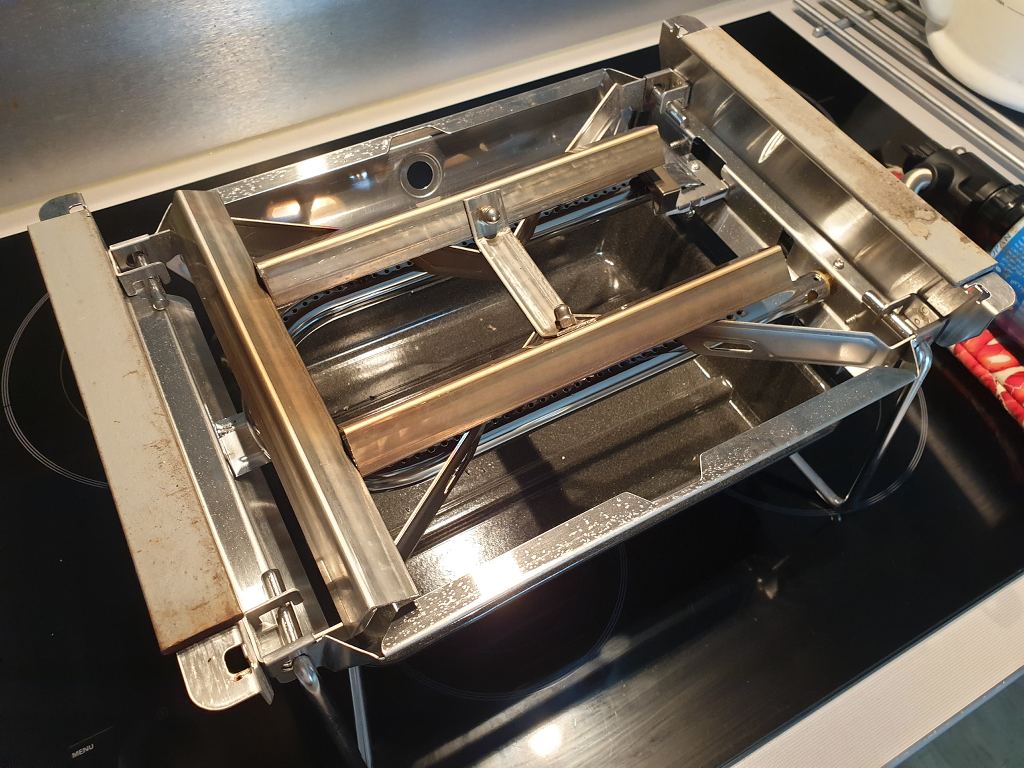 I placed some steel spacers at the top and bottom to level the lips that normally hold the cast iron grate. Then I added a Grill Grate. Job done 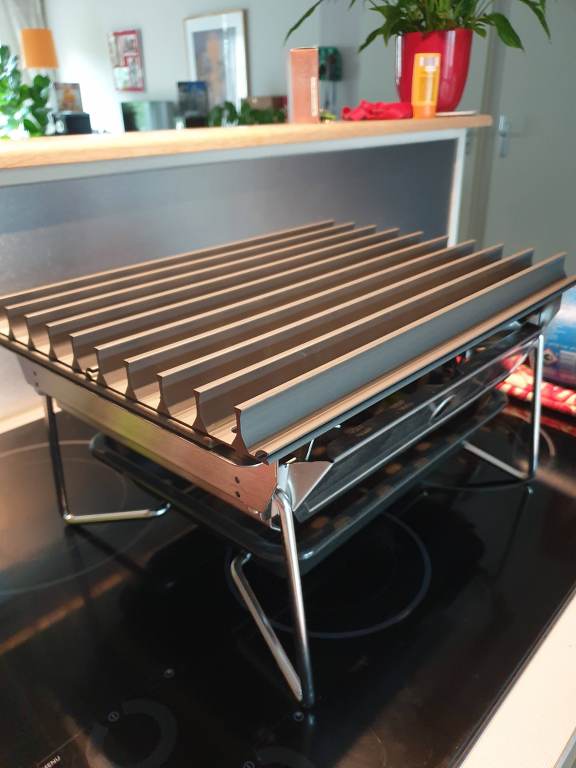 I quite like the way it still fits in the IGT frame. It is slightly wider than a single unit so I added two slightly thinner hardwood panels. 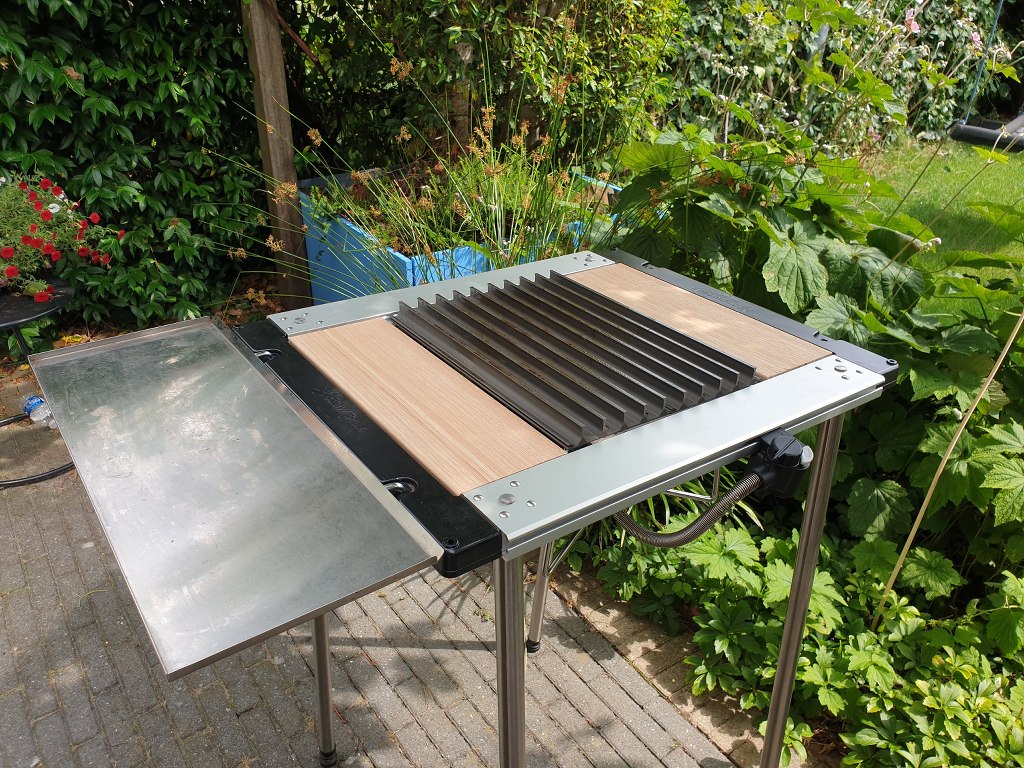 So now let's try it out 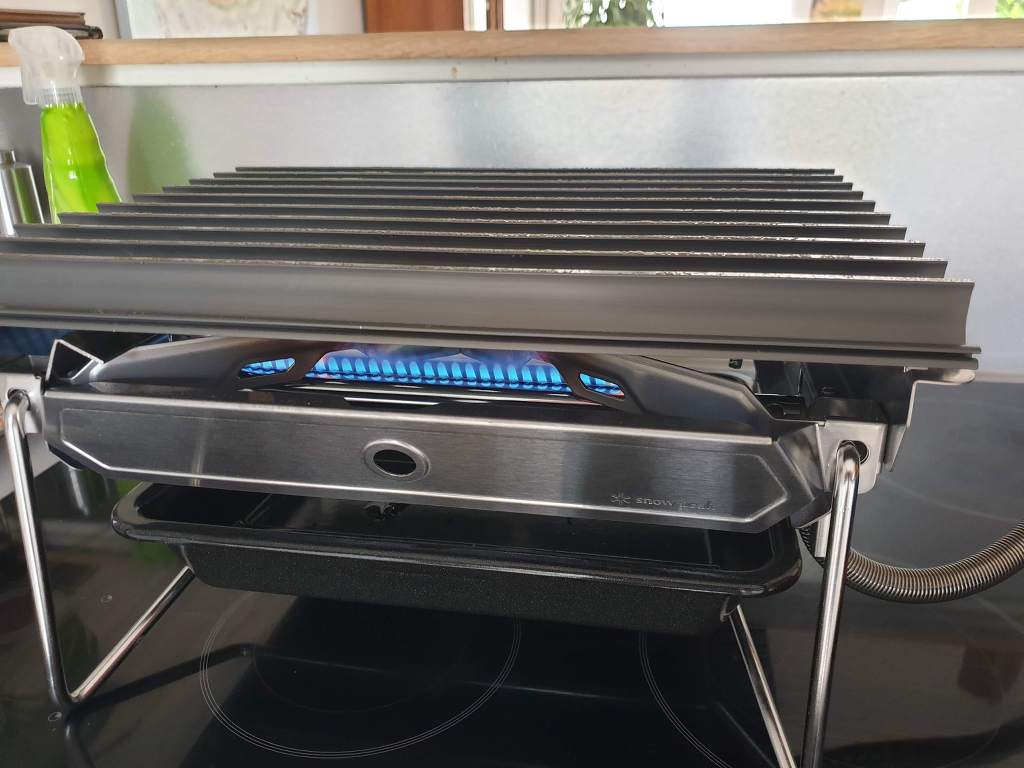 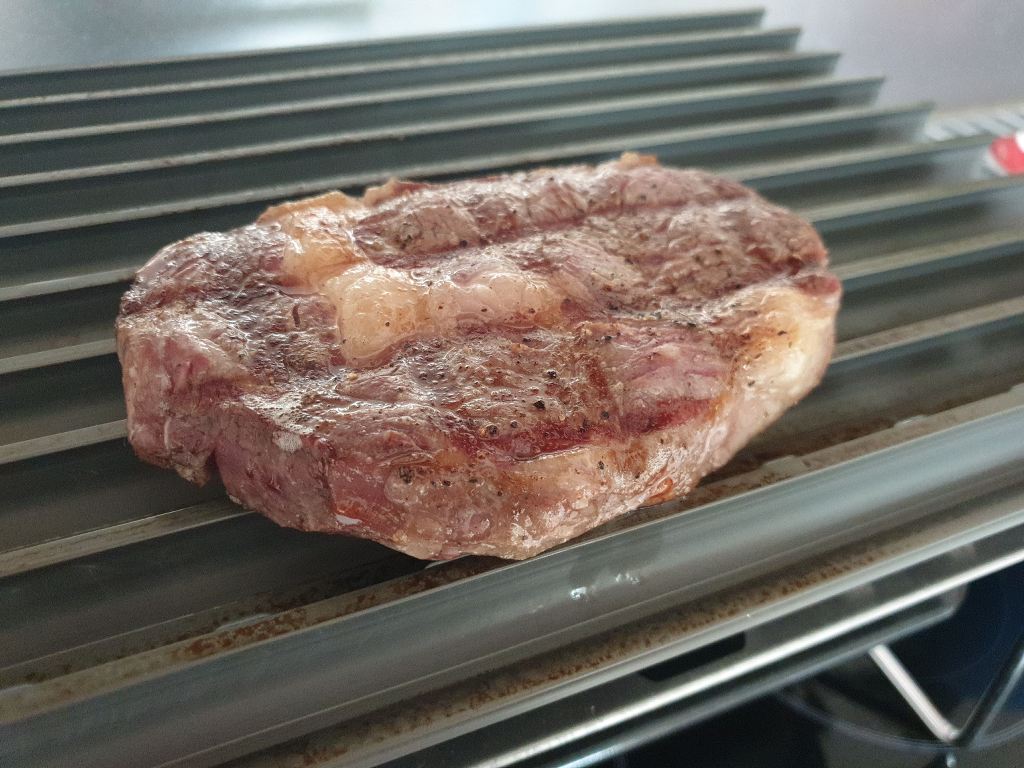 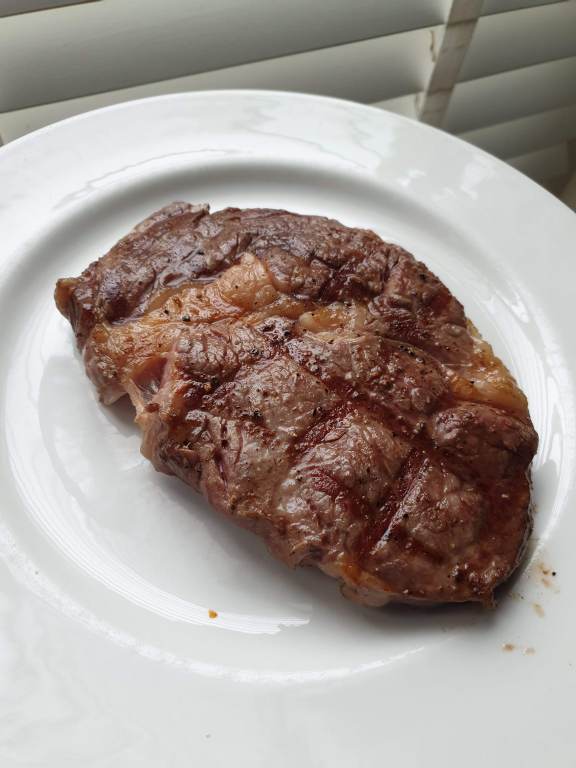 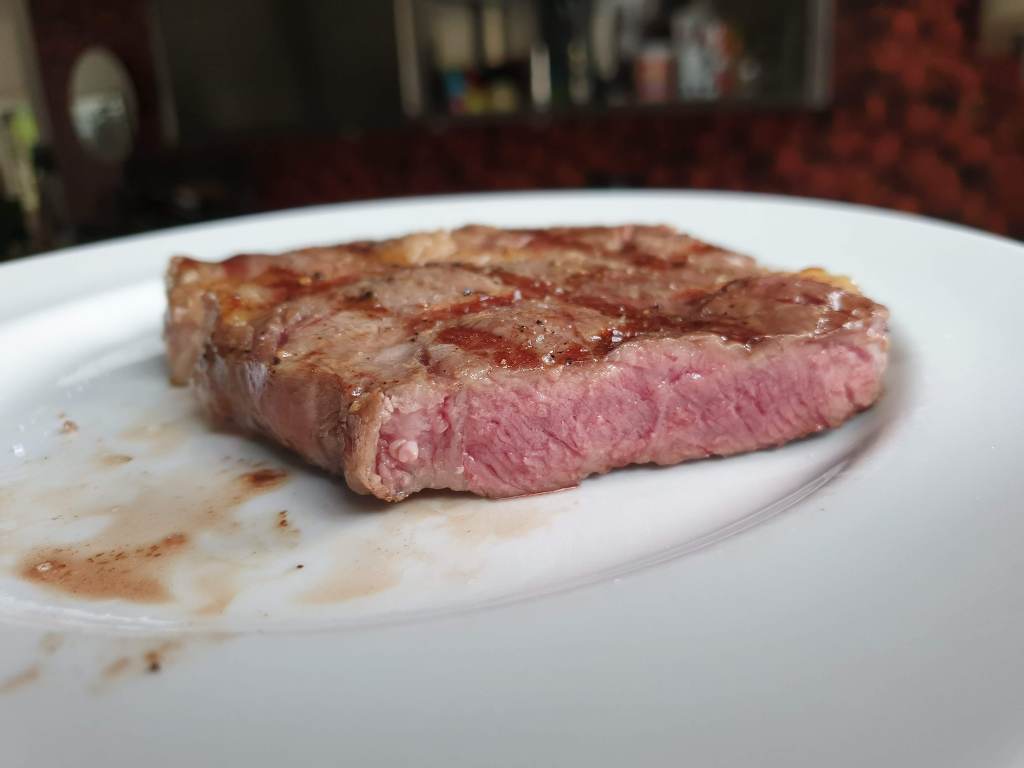 So how did it do?
It wasn't an inferno of heat. It took me longer to cook the steak than it would have taken over coal. But....it was cooked evenly and tasted like it was grilled/barbecued.
I might have a go without the diffuser to see if that makes a ton of difference, but I think I am near a useable grill which still acts as a griddle. It's an easy swap.

What do you guys think? Anyone had a go? Any suggestions or criticism?

Does anyone have a source for this? I would like to get one or two of these.
Jon

GPS_Jon said:
Does anyone have a source for this? I would like to get one or two of these.
Jon

Sent from my Pixel XL using Tapatalk
Click to expand...

Yahoo Auctions has a pair for sale here. It looks like a Festival item Snow Peak had for sale in 2016-2017. Maybe google Snow Peak FES-087 to find other listings. If you don't necessarily want a Snow Peak version there are mosquito pigs for less online.
Last edited: Aug 6, 2019

WestWorld said:
Yahoo Auctions has a pair for sale here. It looks like a Festival item Snow Peak had for sale in 2016-2017. Maybe google Snow Peak FES-087 to find other listings. If you don't necessarily want a Snow Peak version there are mosquito pigs for less online.
Click to expand...

They were about 2800 yen when new. I should have bought them then. 51,000 yen for one now is insane.
I did order a ceramic one for my home off of eBay. Don't really want to take it on the road though.
Thank you for looking.

Has anyone ever put a Grill Grate on a single BBQ box?
R

Lennart said:
I might have a go without the diffuser to see if that makes a ton of difference, but I think I am near a useable grill which still acts as a griddle. It's an easy swap.

What do you guys think? Anyone had a go? Any suggestions or criticism?
Click to expand...

Nice effort! I think maybe the grate has too much mass for the little burner; they are all acting as big cooling fins. Maybe mill off 75% of the height of the grates, and the burner could probably keep up a little better.

I have one of the griddles, but have not used it. Would be interesting seeing what surface temps one you can achieve with each surface, in relation to the weights of each.

Finally took the oven out on the trail for some pizza. Works great over the double bbq! First night used some premade Trader Joe's crusts and second night used fresh dough from Safeway. They were out at TJs. The fresh dough tastes so much better. In the morning, it was pancakes on a lodge single burner griddle. Everything worked great except the propane in the regulator. I think the tilt of the propane affected it.

I have an IGT4 setup with Baja burner, double bbq box, field oven, single bamboo insert and knife with case that doubles as insert. I also have the large table extension but the ground wasn't level enough to add on. SP carry bags help with transport but the double bag isn't big enough for the field oven.

I'm planning on building storage into my Defender 110 for each piece.
F

25% off all SP gear at Moosejaw right now

Just got back from Camping in the Dordogne in France. Very hot most of the time so great thing I brought the Large tarp I got to use the grill burner some more in its orginal setup and it is actually not bad. Grilled some nice (huge) tuna steaks 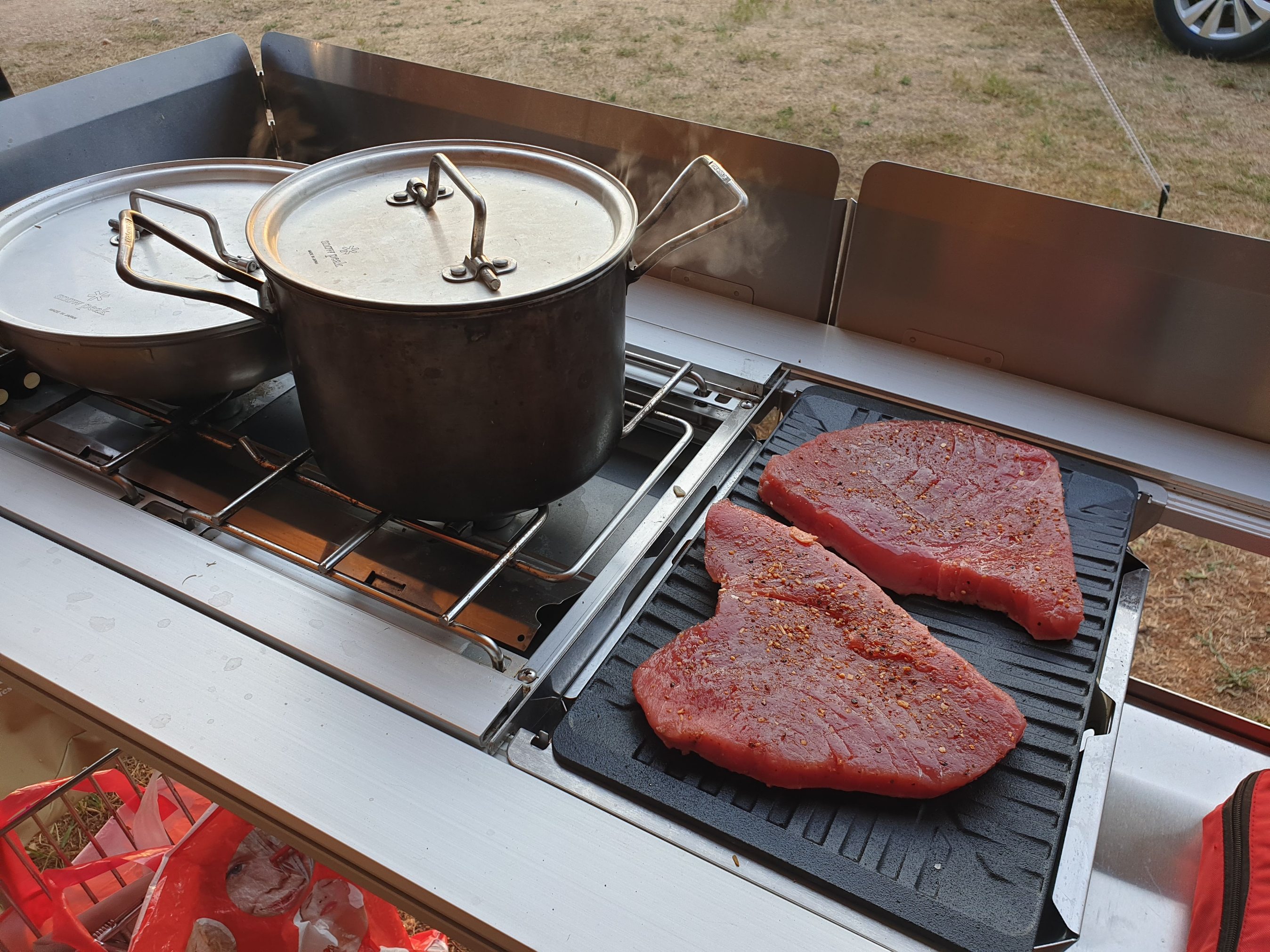 Had a surf and turf platter 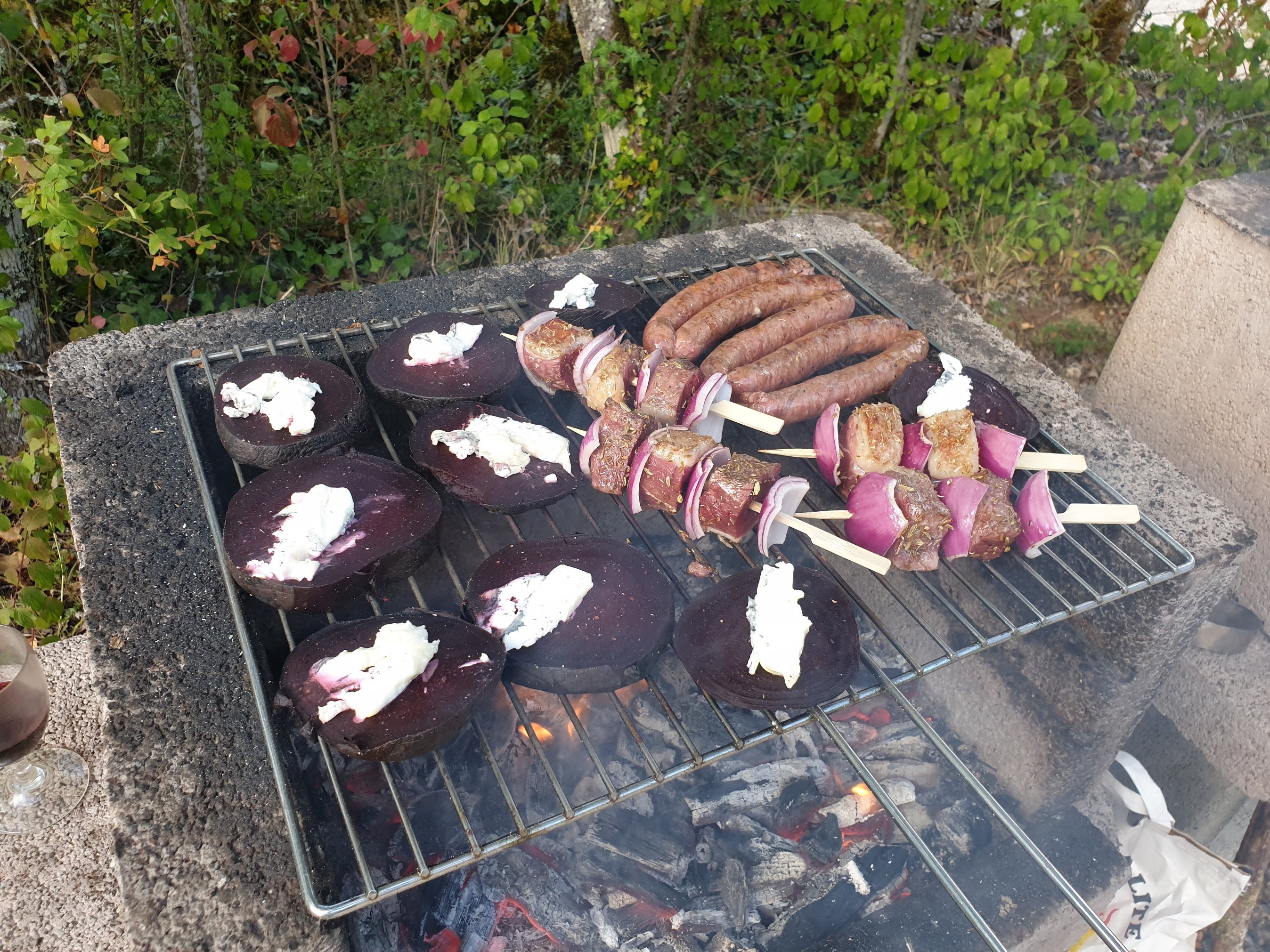 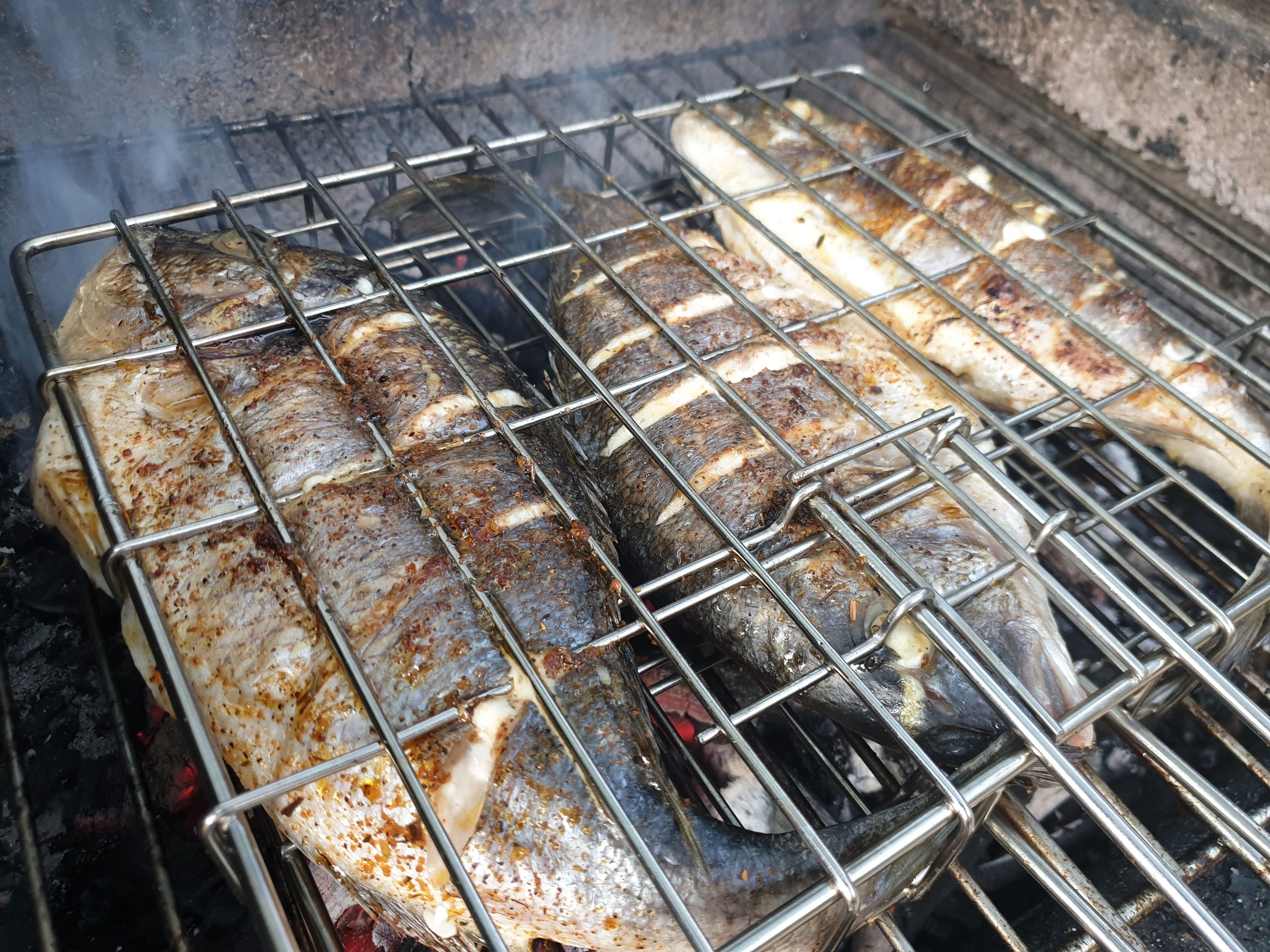 I took the small fireplace on our Kayak trip on the Dordogne river. Grilled some Bavette for lunch. 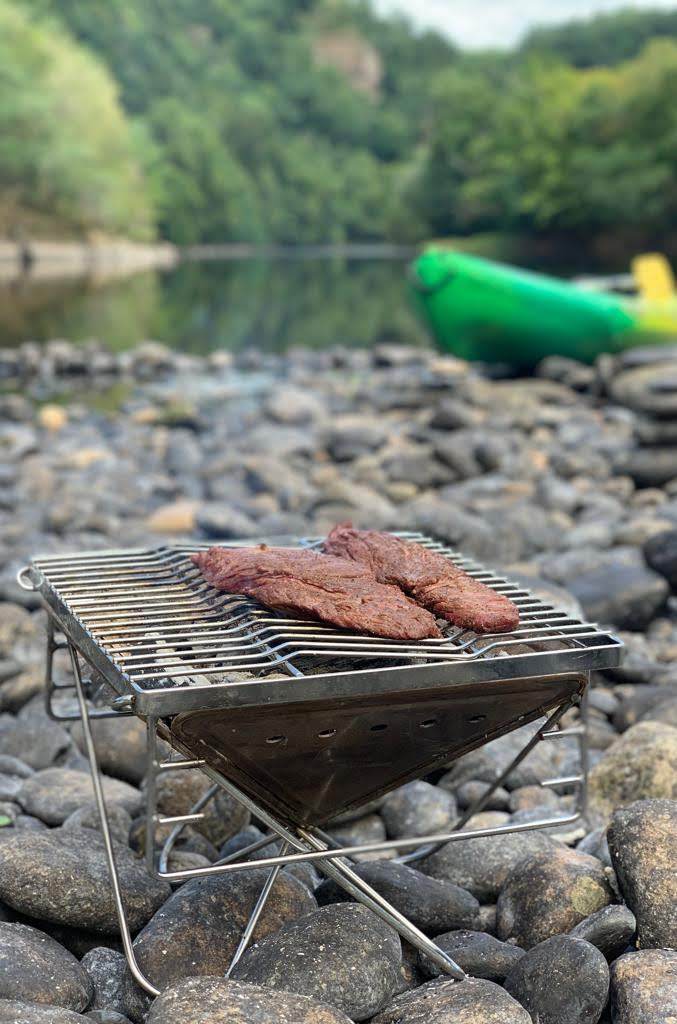 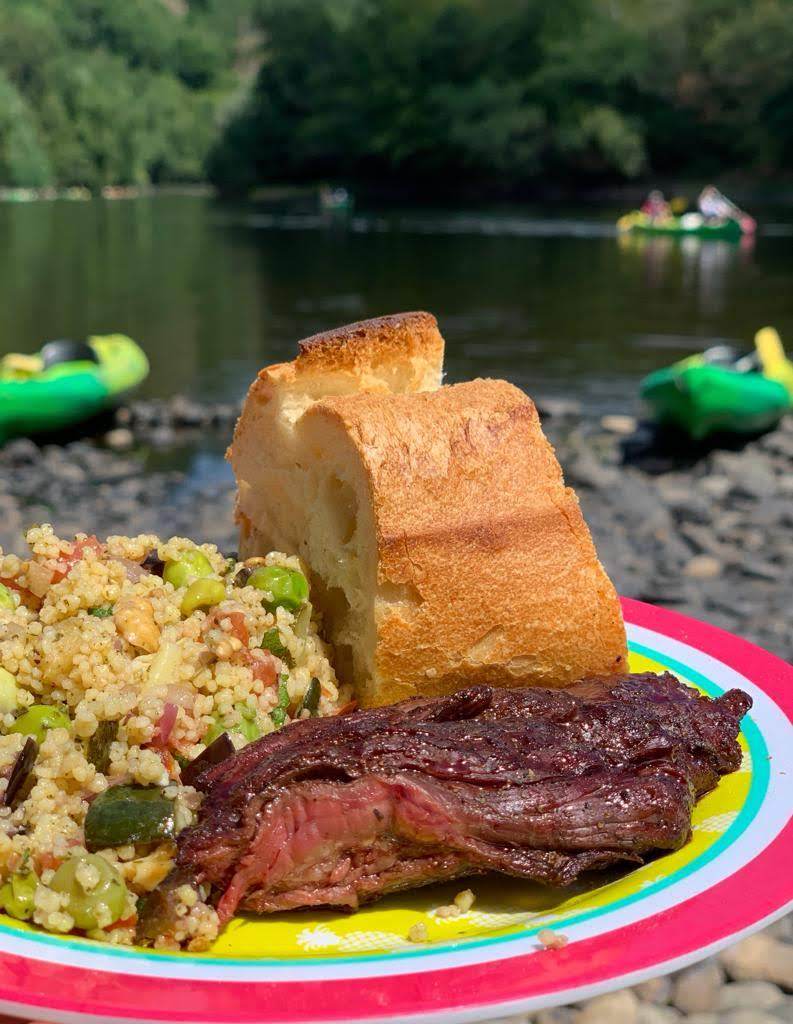 Had great time and of course with Snowpeak, it's not camping, it is Glamping !
Filled the sake bottle with Gin before I left home and had a nice G&T under the Tarp..... 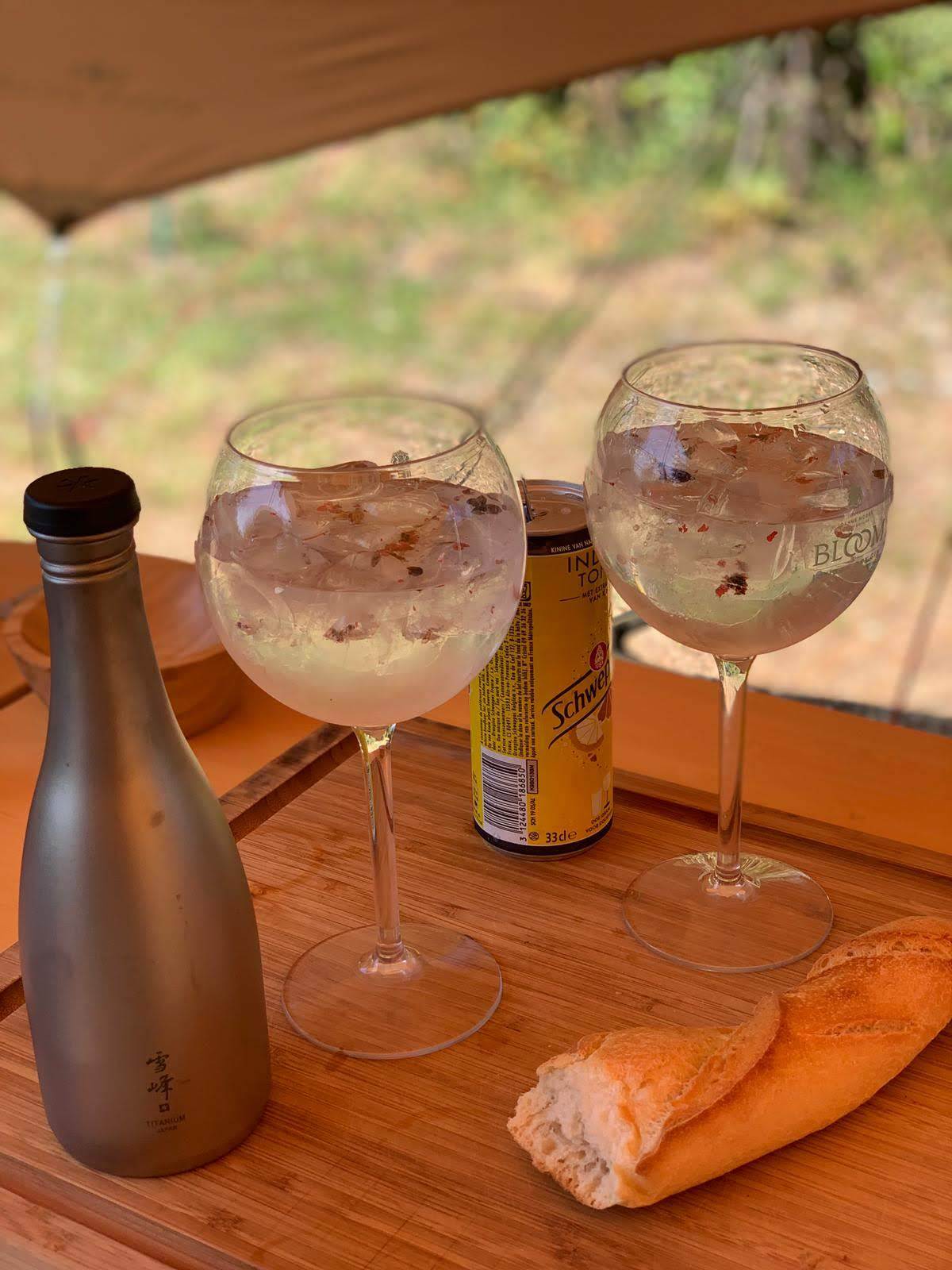 Once again mate raising the bar and oozing awesomeness

Sent from my iPad using Tapatalk

Doe anyone know if the oven will work on the double burner stove?
R

You took the firepit in the kayak for cooking lunch along the river.

Lennart, you're too much!!

I just got back from eating out tonight, and yet your pictures make me hungry all over again. Still planning to make that chiri-nabe you made a few summers ago...

BTW, I'm digging the SP cookware stuff in the picture with the tuna steaks. That looks like nice stuff with the huge fold-down handles. Where'd you get that?

I took the SMALL firepit. That is quite manageable