I have been half searching for a replacement for our Ski Bum Mobile V1.0 , I love the truck, but the long overhang and fiberglass construction limit me a bit. I had gotten a quote from Tri Van for an all aluminum body (same construction as Ward's Ram 5500) for an F450/550, and was keeping an eye out for cab chassis to com up cheap on CL.

Then I found this truck, Nearly the same body I had a quote for, on a 2008 F450 4x4 frame, which had been stretched 36" to allow for nearly no overhang. It was built as a chase truck for a UTV racing team. I wasn't really ready to pull the trigger for a new truck, but this was too good to pass up. Deal was struck and the truck headed to my driveway. 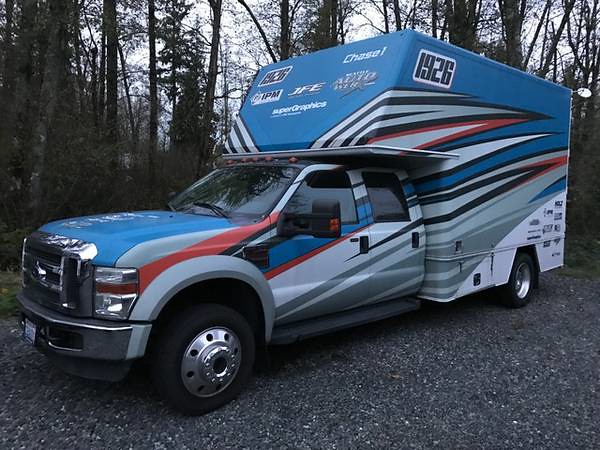 About the truck, Its on its second motor, the first owner towed horses with it, she attempted to drive it home after the CEL came on, #8 injector had failed, rod ventilated block. PO bought it, had a local shop drop a long block in and used it to go to Vegas for races a couple times. Then it sat, this is good and bad, it has ~4k miles on the new engine, but it leaks. A fair bit. Oil pan, valve covers and #6 injector seal. And the dreaded flex joints in the up pipe. Not the end of the world, but a lot of stuff to remove to get to the problem areas. It seems most procedures on these new trucks is cab off or trans out. Fun.


Everyone home in the driveway, I need a bigger driveway for this many large trucks... 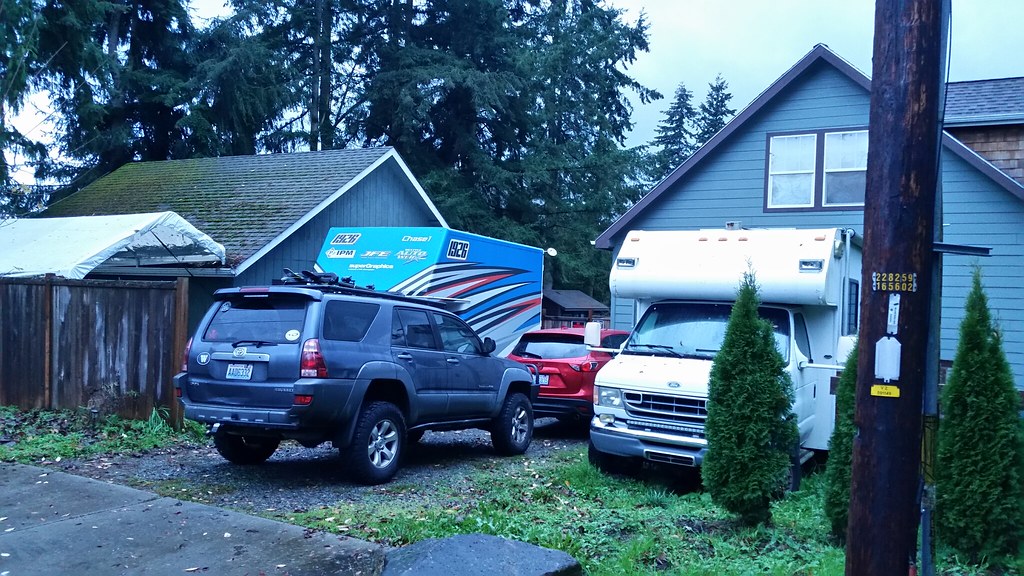 The box is a bare shell.The cabover is 4' tall. Very high interior roof. First order of business is the roof, two vents were framed in, and covered over with plywood and Plexiglas. They leak. So two Maxxfans were ordered and have arrived! 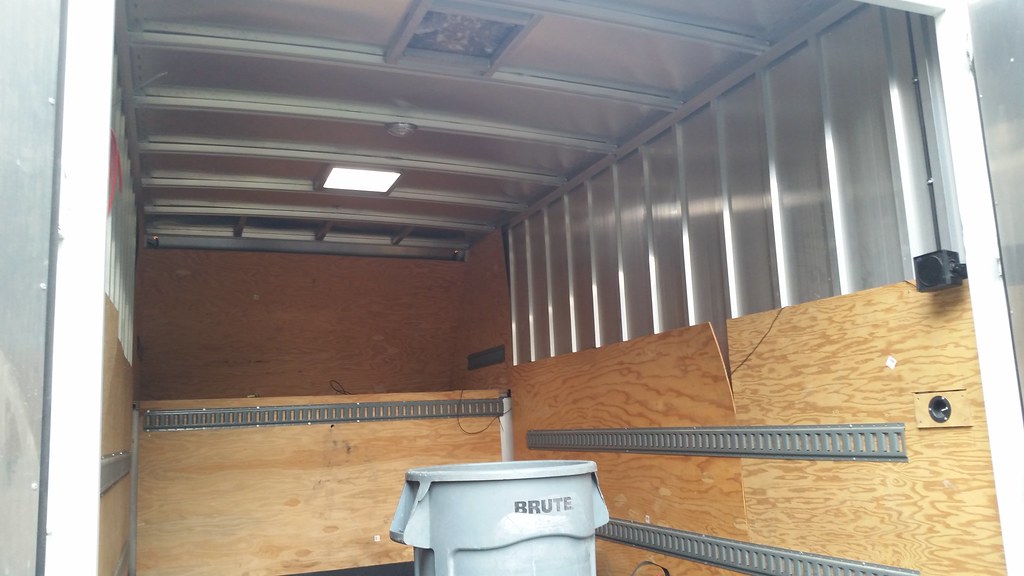 Maxxfans and sealant, first of many parts deliveries. 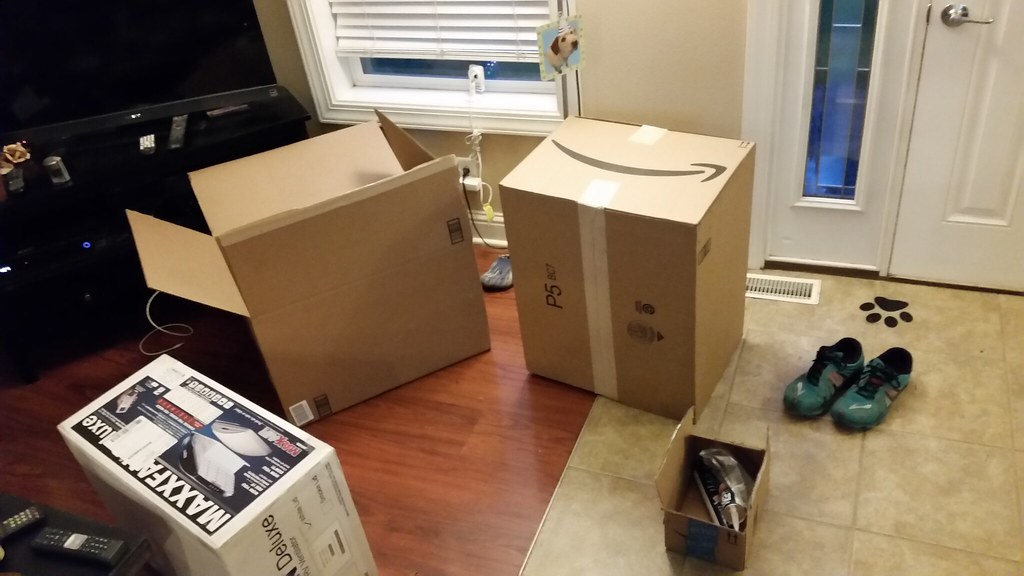 The back is insulated barn doors. They will be staying. One will be for exterior storage, the other can be opened to the end of the bed if its used in summer. Four 6V 250Ah AGM batteries can be seen here too. 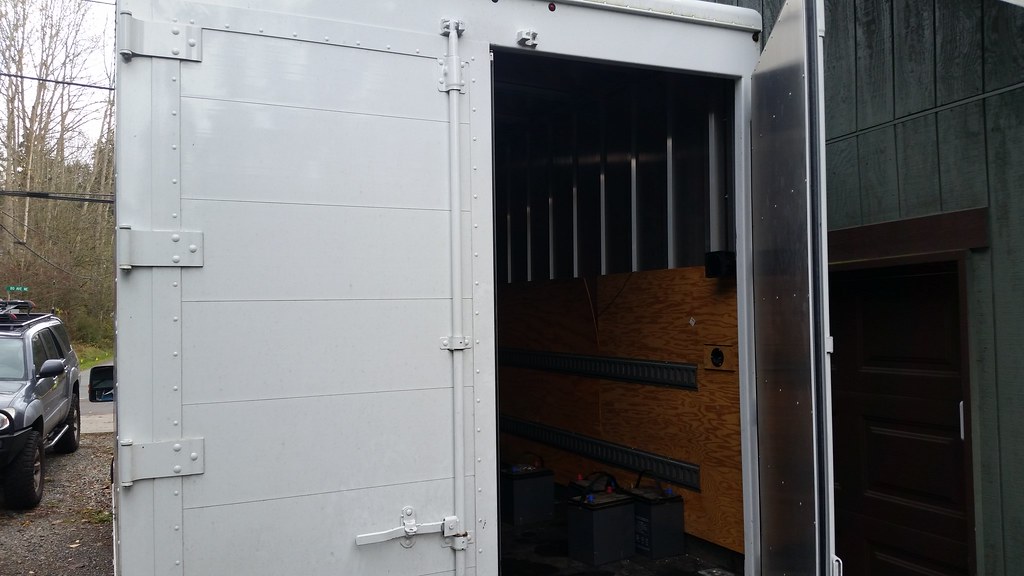 Condensed version of our current layout. I think it works pretty well. Toilet will just have a curtain, leave a bit more space at the door. Cabover bed for the kiddo, back bed for us, fixed dinette. Counter space is limited, but will have a fold out over the crawl through, and is across from the dinette table that can be used as well. Small bar sink, three burner RV cooktop, and the space below used for a marine fridge. Exterior storage for skis, other tall stuff at the back. Still debating on propane tank placement, I am thinking two BBQ style tanks on a swing out on the drivers rear. 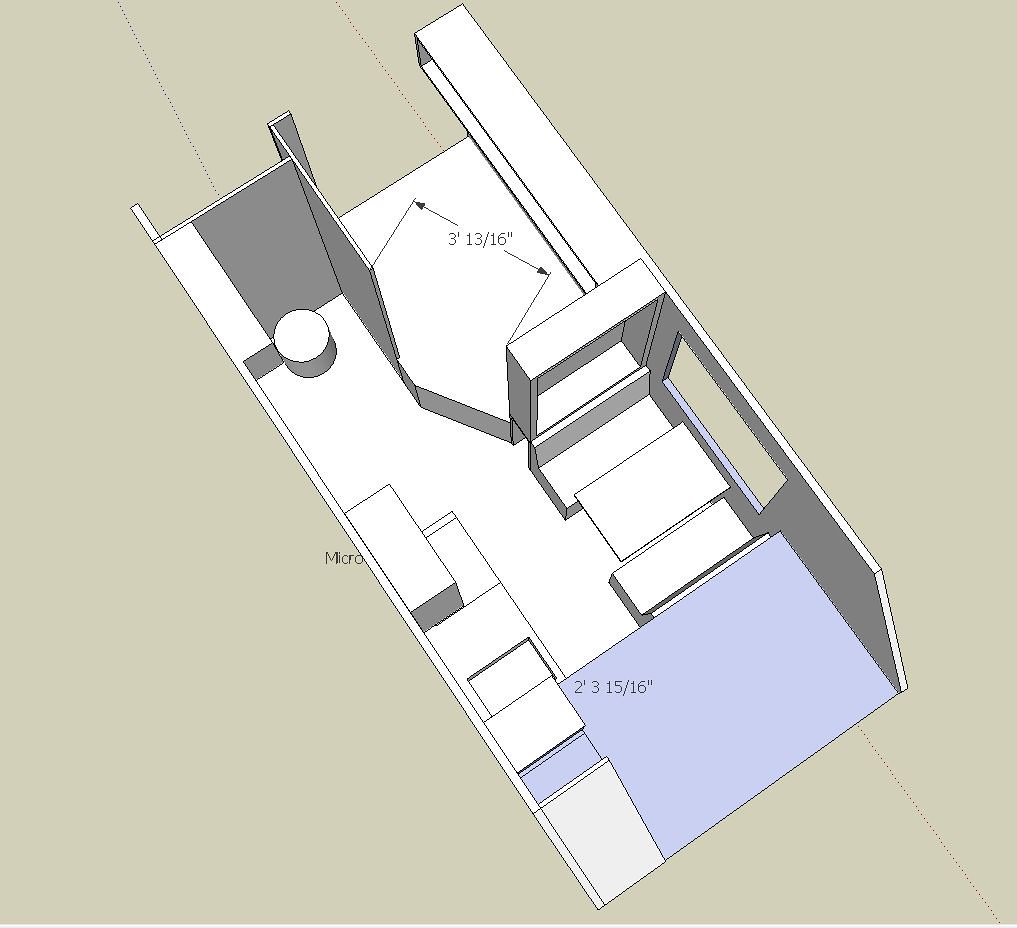 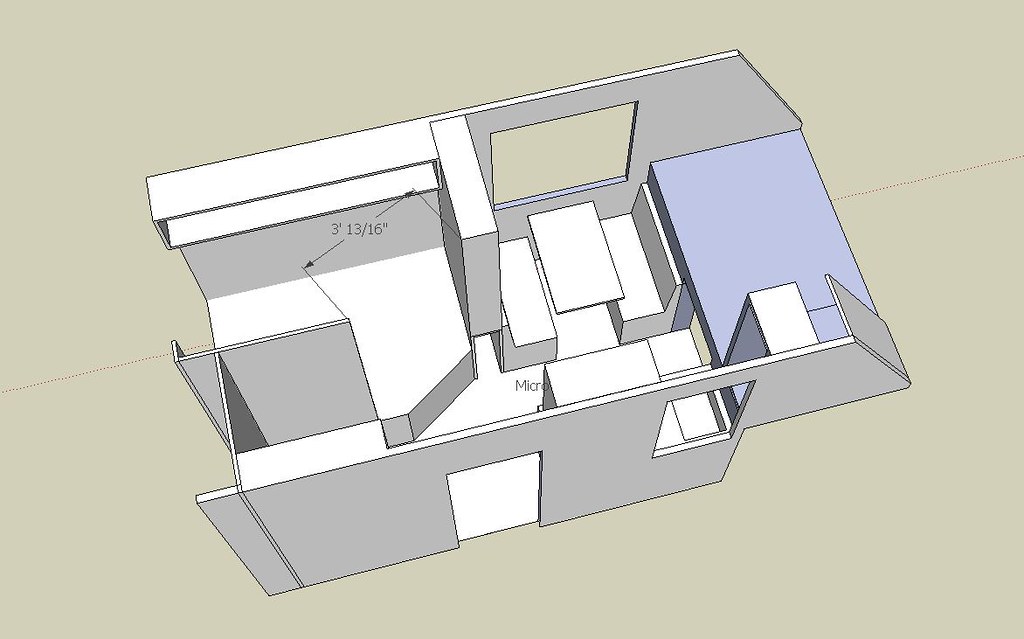 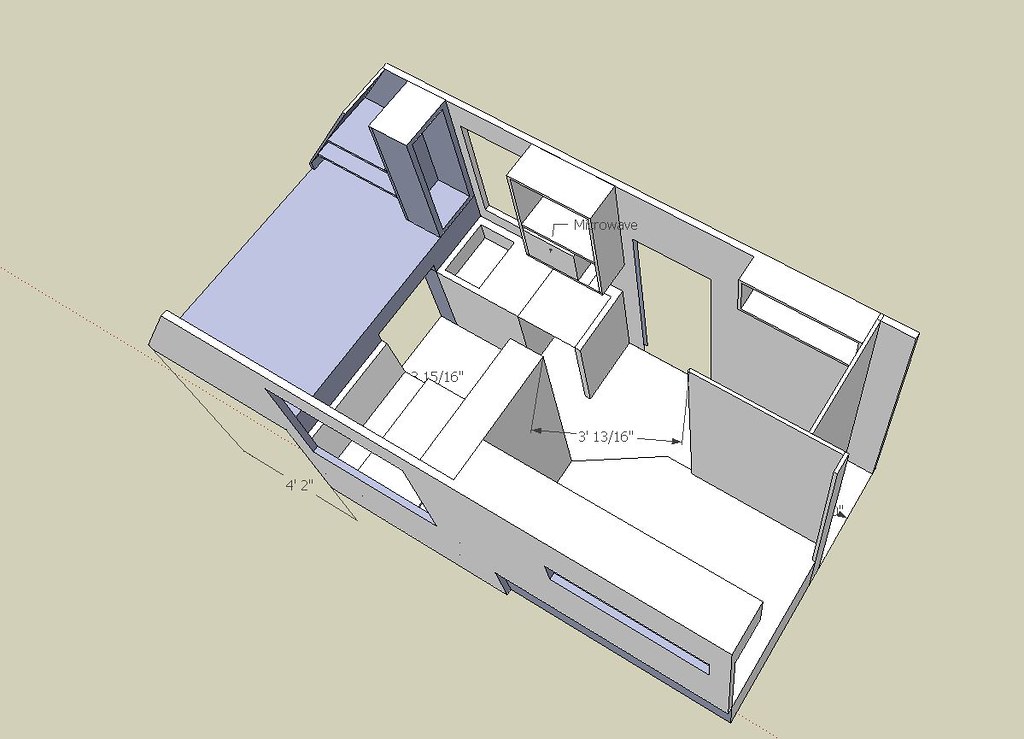 First order of business is getting the crawl through, windows and doors framed and cut. The crawl through is going to be a challenge, I have some thinking and blue taping to do still, but it should be doable. Accordion seal will be used there. If anyone has done this I am all ears.

Once the framing is done I will have the entire thing spray foamed. I am still debating on ceiling thickness if anyone has input. Walls will be 1 3/4" foam with 1/4" plywood interior skin. Spray foam will be a big $$ item, but I fell it will be worth it in the long run.

Then its on to interior finishes. Dinette and vertical walls I am thinking will be small steel tubing with a thin plywood skin. Maximizes interior spaces of the compartments that way.

I am leaning towards doing EGR and DPF delete stuff to the engine while I am in there, but it adds a good budget hit. It may be a couple years down the road. Lift is a ways off too, but for most of what we do it should be ok for awhile. FS roads and snow/ice covered roads to ski areas. It has brand new tires that I wouldn't mind using up either.

This will be a very slow build. I am very budget limited, so it will be plugging away a bit at a time as budget allows. I will need to sell the RV come spring, and would like to have this one done shortly after, but I think that may be a lofty goal.
S

Nice. Following this one for sure.

Sent from my SM-N910V using Tapatalk 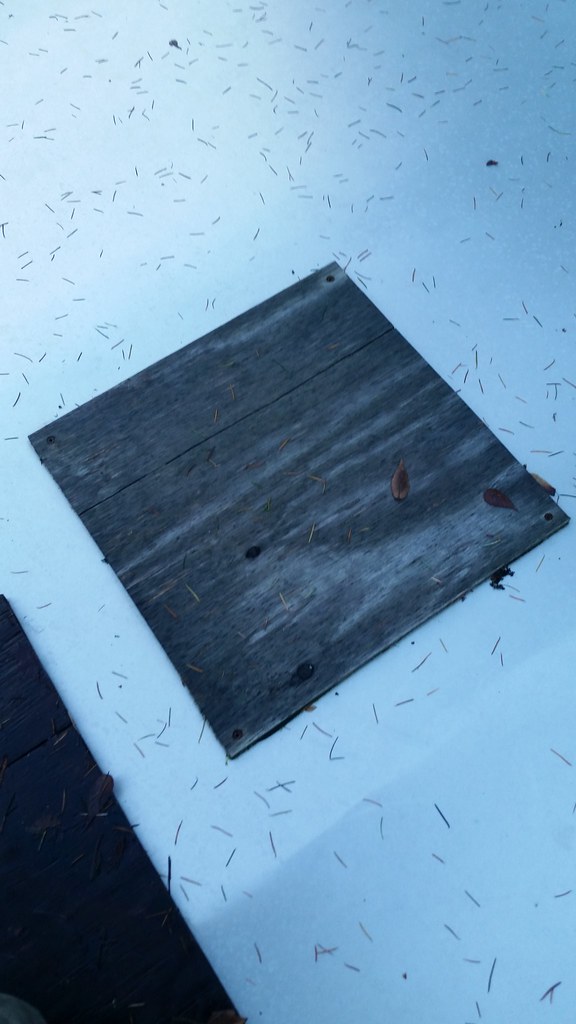 Pull off plywood, scrub with MEK 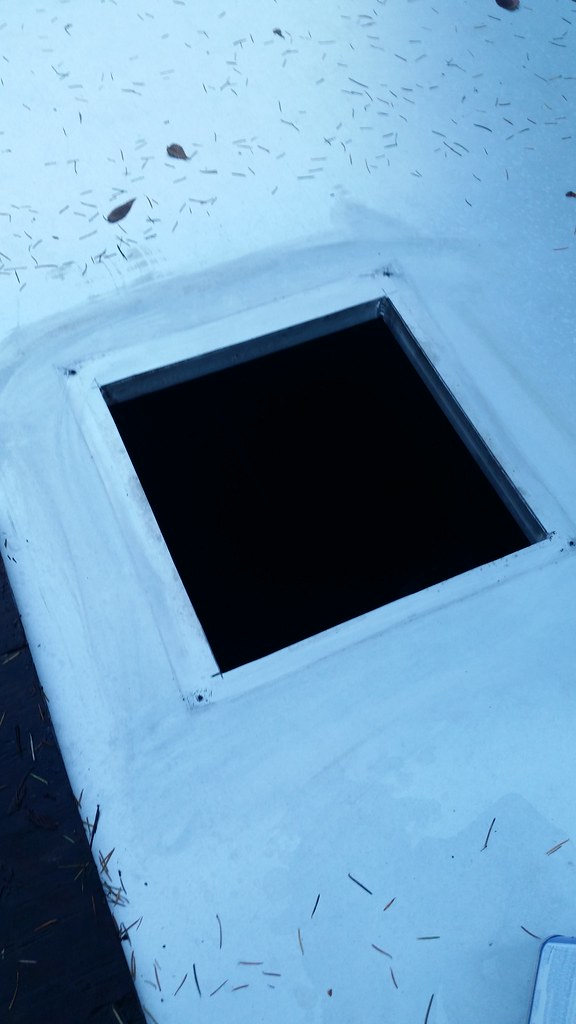 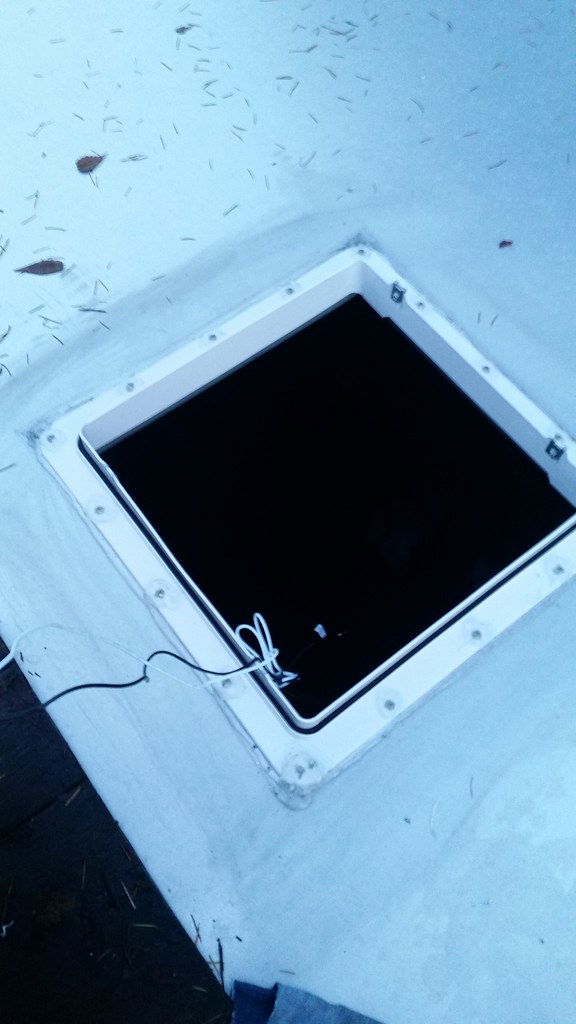 Roof hole #1 done! Only broke one screw off. Stupid stainless. 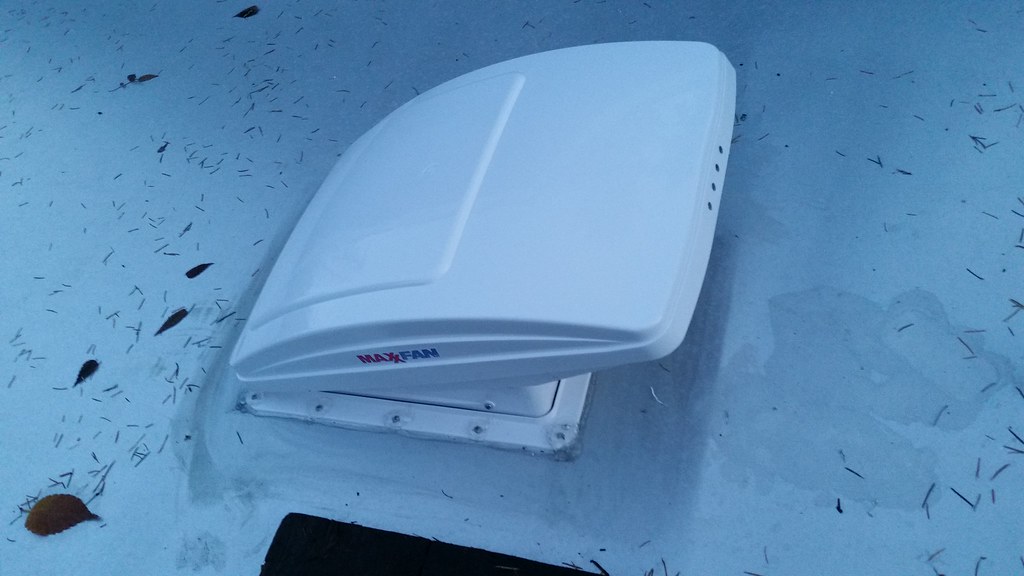 Sent from my SM-N910V using Tapatalk

Sent from my SM-N910V using Tapatalk
Click to expand...

Yep! I can move the trash can out from under it now :snorkel:

java said:
Yep! I can move the trash can out from under it now :snorkel:
Click to expand...

Going to be sweet, looking forward to following the build.

More small progress. Climbed under, with tarp this time (i managed to park on the non gravel, ie mud section of my driveway), to investigate oil leaks. Headlamp, UV light and torque wrench in hand.

Oil pan bolts are to torque spec (9.5 ft lbs, really?!) but are dripping from the heads around the back of the pan, front looks dry, that makes me thing its seeping past the bolts/threads, but could be running down from above. I just don't see it getting to the heads of the bolts.

Valve cover area on passenger side is wet and running down the block, may be valve cover gaskets, may just be the glow plug harness on that side (DUMB design). Likely both though. Still determining if I want to tackle those or farm it out.

Stripped the interior down. I was getting a bit of water at the back edge of the cabover, need to find it. I had a suspect in mind. 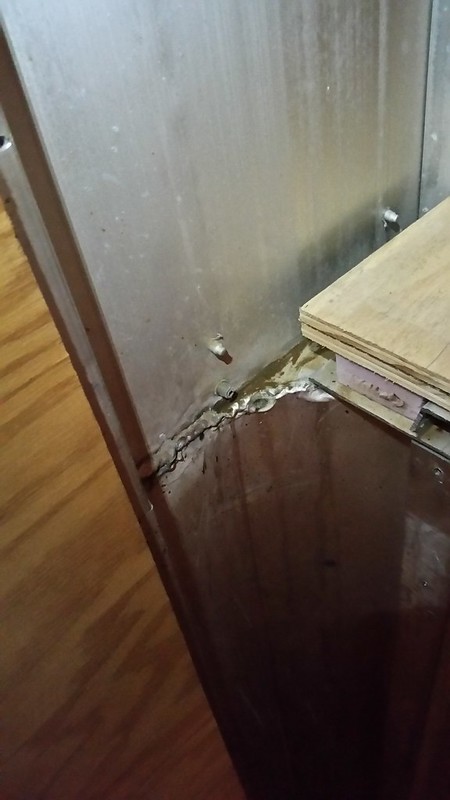 Marker lights were the suspect, and sure enough, you can see the tel tale dribble line coming out the bottom. (there may still be a little coming in from the gutter-body joint, but that is TBD) 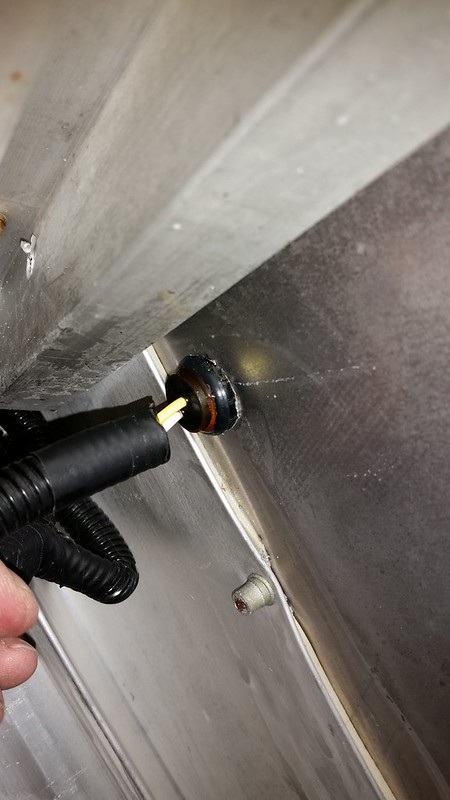 Passenger side is better, but still a little drip. 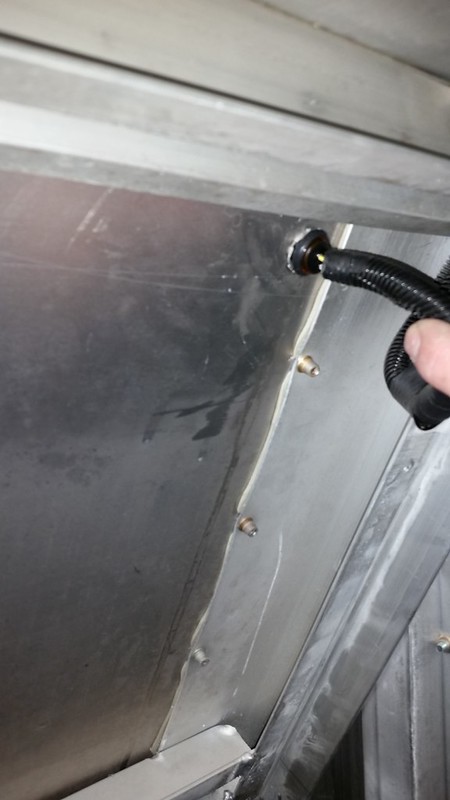 In case anyone is interested, here is how the panels clip together and form the ribs. 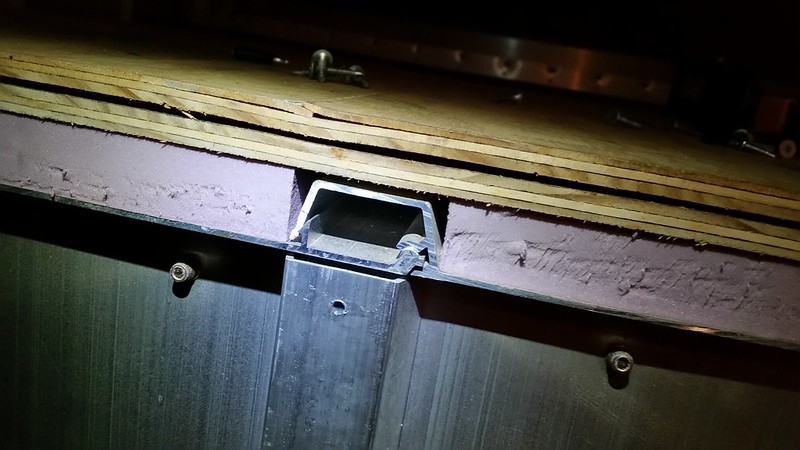 1/4" plywood is quite heavy for an interior panel, especially when backed by a sprayed in (polyiso?) foam.

It is common in the SIP world to use sheeting of 1mm or less for skins. I have seen everything from 0.020 and 0.030 aluminum to 0.8mm Phenolic bonded to XPS foam sheet.

I would imagine that box is pretty heavy already and while the 1/4" is not a deal killer, I would look for something thinner unless you are using it as a liner panel, i.e. loading ATVs in the back and want to protect the walls, for example.

DzlToy said:
1/4" plywood is quite heavy for an interior panel, especially when backed by a sprayed in (polyiso?) foam.

It is common in the SIP world to use sheeting of 1mm or less for skins. I have seen everything from 0.020 and 0.030 aluminum to 0.8mm Phenolic bonded to XPS foam sheet.

I would imagine that box is pretty heavy already and while the 1/4" is not a deal killer, I would look for something thinner unless you are using it as a liner panel, i.e. loading ATVs in the back and want to protect the walls, for example.
Click to expand...

The 1/4" that is in the pics if from the PO. I was thinking I would use the 1/4" as well. Yes its a bit heavier, but it also allows me to screw things, small shelves, baskets etc wherever needed. 1/4" also comes prefinished easily available. You make a good point though it does add up quickly. It will get spray foamed.

Brown Santa has been leaving me lots of goodies. 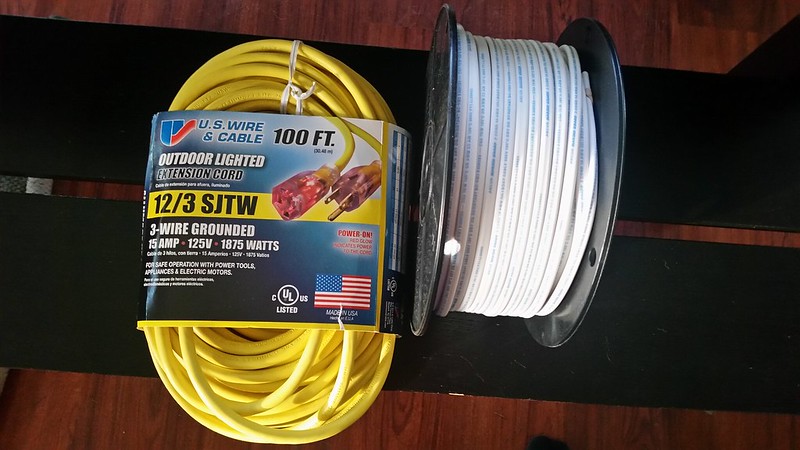 Also got a switch panel and the interior lights I will be using.

I only had an hour or so, but I started on the cab. 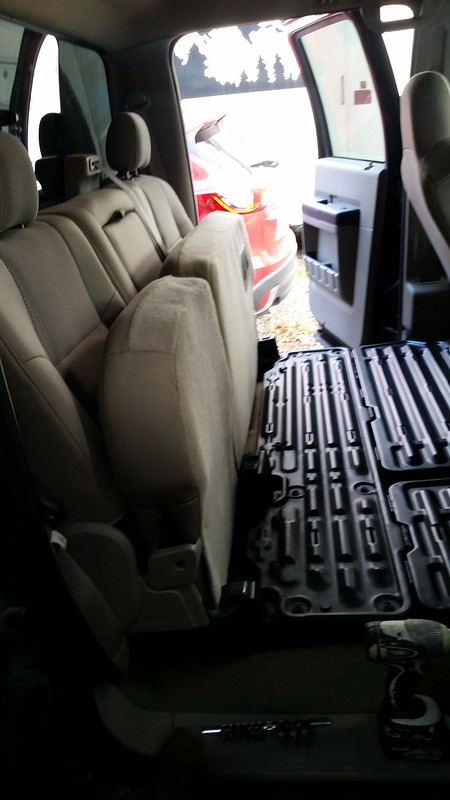 Stripped the back wall. 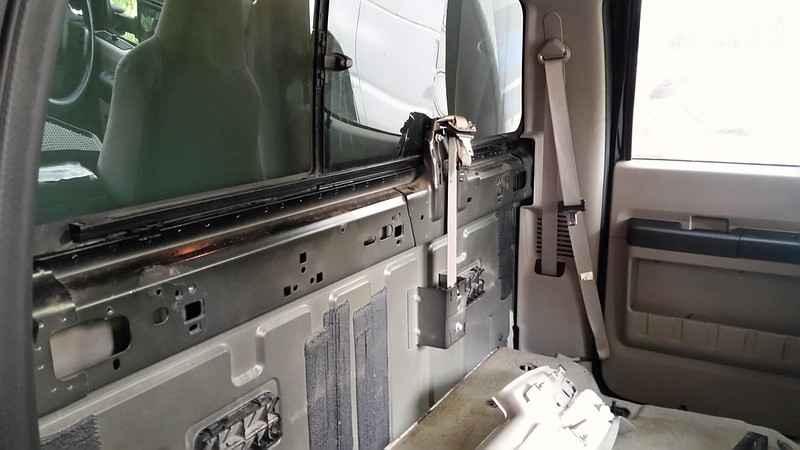 I knew there were some mice at some point as I found some turds under the back seat.... But they made a home in the middle seat belt housing. No fresh, but stinky mouse pee. Somehow they seemed to have made it above the headliner too... I really didn't want to pull that.

Planning for the pass through, it looks like I can unbolt and slide the box back about 6&quot; I hope thats enough! And of course this is a glued in back window.

Thanks! I'm super excited about it.

I got started on the wiring last night. Almost 300' of wire done already. Ouch.

I was planning to run 2/0 to the main batteries unless that seems way overkill.
Last edited: Dec 6, 2016