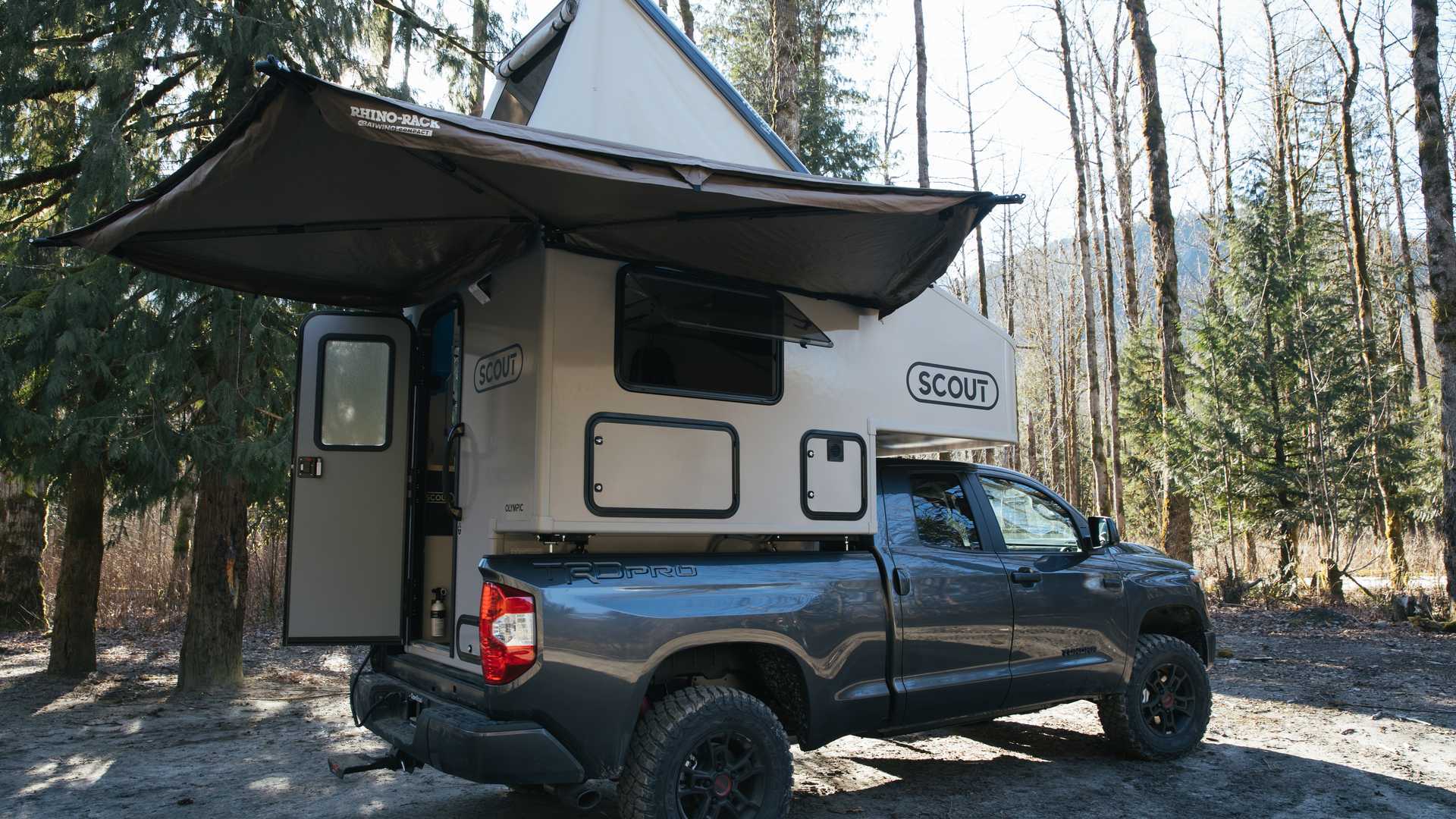 A new pickup camper shell is on the market, called the Olympic from Scout Truck Campers. It's a basic design that offers impressive space and capability.

I have been following these on FB and a few other places. Nice looking setup, makes a lot of sense. Good use of space.

A new pickup camper shell is on the market, called the Olympic from Scout Truck Campers. It's a basic design that offers impressive space and capability.

Did you miss this great write up here on Expo? 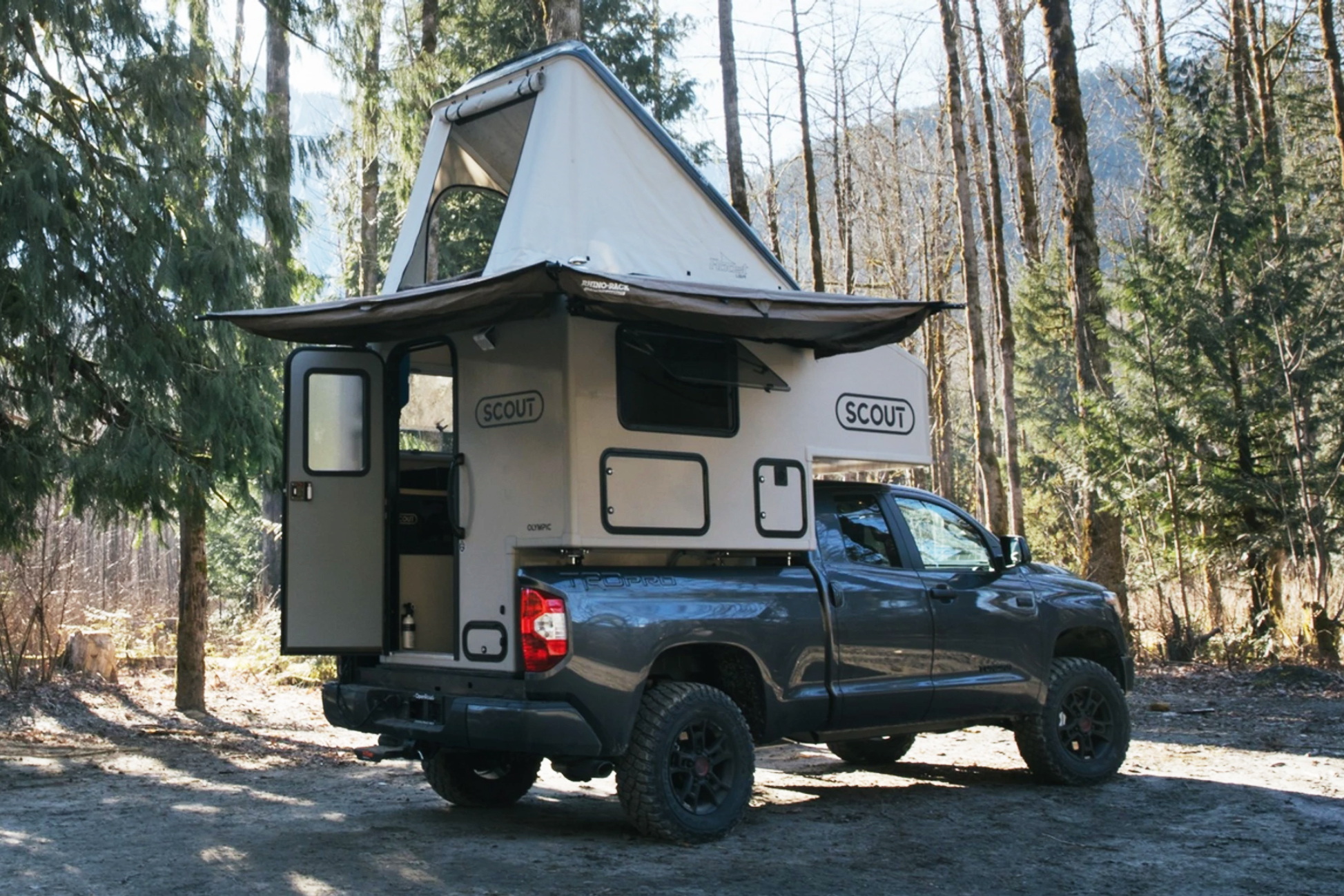 Scout Olympic has released their new overland truck camper, featuring all-weather comfort for up to six, with their innovative loft configuration.
expeditionportal.com

I mean...that looks pretty awesome. Very lightweight for what you get. Most popup truck campers are more than that.
R

I have been watching them also. A dealer near me is supposed to get one . I want to see one in person . Great utilitarian use and looks like a great build and quality of products their using . May be my first brand new camper

That's nice, but clicked cause I thought it was an IH Scout.

They are cool, built close to me, I will try and swing by to check them out in person and report back!
I do think they are priced fairly high for the minimalist style, with the rooftop tent, and a few other options they end up being close to $30k. When I think minimalist camper I want minimalist price. But they are lightweight and seem well built. I am waiting for the full-size option to come out, it will have a shower option it sounds like.

My dad saw this headed down the highway today

Aside from it being a bit high priced (they are selling insanely fast...so maybe its worth it), what do you guys think of this on a 3/4ton F250?

I'm new to slide-in campers but need something real mobile for my wife+2 kids here in PNW...something that makes getting out quick and easy. We are always traveling to mountain bike, camp etc and I can't do what I need with a pull trailer but also need to sleep the 4 of us. We aren't camping to just hangout inside a trailer at all (my young boys are "outside dogs" if you know what i mean) but there will be a bit of rain and wind at times. I'd like to take it to the ski mountain the night before and do a quick overnight rather than hustling everyone up there at the crack of dawn. Bathroom isn't a huge value to us. Guys do a lot with super expensive sprinter vans or giant campers but I can't afford a 100k$+ setup...tho we've got some money set aside for this. I'm kind of looking at it like an 4 person VanCamp style solution rather than mimicking a big trailer for 45k$ Lance. Then again, I don't have a ton of expertise here but it looks pretty sweet.

I'm wondering about the following:
1- The vertical space for the cab over bed isn't super high since it tapers down.
2- There isn't a fantastic fan solution but there is a little marine fan and the windows+rooftop tent. Maybe I can pop a fan into the roof hatch and suck air from the main area and vent into the RTT area.
3- Does the mattress suck
4- driving it around town with taking it off all the time...we do have a 4Runner but at times I need to drive the truck.
5- Anything else I'm ignorant too

I wonder what the larger Kenai model will look like.

life_w_vagabonds said:
That's nice, but clicked cause I thought it was an IH Scout.
Click to expand...

Is this what you were expecting?
S

I spoke to a guy at Scout. He wouldn't say everything about it but did say that they are releasing it this coming week. I spoke to their #2 dealer (who seemed to have the details a little, I'm guessing they were filled in already). He said it'd be very similar to the Olympic but another 2ft to support the wet bath and closet. He really liked the Olympic tho and said unless you really need a bathroom (it's not optional), that it was the way to go. Kenai will be another 500-600lbs and not be a drop tail. The guy wasn't on commission and I dont live in his state so I dont think he was pulling my leg.
S

I'm hoping some of you can provide some advice to a newbie. So more details on the Kenai sound pretty dang interesting. Difficult choice for us coming up and trying to figure out what'll work best between the Olympic and Kenai. I've got a F250 crewcab with a 6.75ft bed 3/4 ton (sticker payload is 2400lbs so actual is prob closer to 3000k when not towing) and two young boys and a wife. 8ft Kenai would hangover the truck bed by 12", is that a concern if the COG is still in front of the rear axle?? Is it going to drive all that differently or be a pain? We aren't Baja'ing it but there is light offloading and winter ski trips. Not going to look as nice/compact but the bigger size might important for 4 of us. We need something for PNW mountain bike trips, camping, idaho/montana fishing trips (towing a light driftboat) and overnight ski trips where we stay in the parking lot the night before.

Aside from weight the Kenai will have a wet bath built into the bench on the right hand side. I think a wood bench-top top folds up and there is a rotating cassette toilet and a shower pan (optional portable shower kit with electric heater, not a built in one). A shower/privacy curtain is there and the grey water vents outside similar to the sink. There is a little wardrobe/storage on the left right as you walk in. The layout configuration is more similar to a stretched Yoho apparently (but width of Olympic) with the side-dinette rather than the Olympics dinette. The side dinette looks like it might actually be more comfortable to sit in with 4 people but I haven't been in one. With 4 of us, that might be a big deal or not...tho it does like it might better for sitting and gearing up inside on a wet/cold/snowing day. Olympic doesn't seem to have a spot where you could sit and put your boots on. That being said on ski days we also need to likely sleep 4 inside without the pop top (roost is working on insulated liner I'm told). The side dinette may be a smaller sleeping area when folded down.

Indoor showering that isn't in the dirt might be nice too, hooked up to a Zodi/Jaalco shower. I'm not sure how much I need the toilet, wife is pretty adventurous and the portable toilet in the Olympic would work for ski parking when we need to pee in middle of the night. Powerpack stuff will be a step up in sizing to 1500 as well.

Part of it comes down to we only have a 6.75 ft bed. The 8ft Kenai is going to hangover by about 12" in my measurements. I have no idea if that's an issue or not. Scout says its not with the light weight and that Kenai was designed for 3/4 ton and seem to like it for my purposes. I do need to drive the truck around a bit in our small town when wife has the 4runner etc. My thought is I may keep it on the truck most of the time if it drives fine but again, I'm not sure what to expect and its not like I can go try them out.

By the time the truck and camper are loaded to hit the road you will be overweight.
S

Todd n Natalie said:
My 2 cents, if the Kanai is about 2,000 optioned out, I would avoid that model if your payload sticker says 2,400 lbs.

By the time the truck and camper are loaded to hit the road you will be overweight.
Click to expand...

Yeah, I was thinking that as well, tho I had that "Payload" explained to me by the RV guys. Basically that is the leftover weight you can put in the bed of the truck AFTER its loaded with 4 adults and the max tow load on the hitch (which would be approx 15,000lbs). After that they said that they do load up an F250 with 3k to 4klbs pickup campers like a Lance 811 (with slide)...requiring airbags of course. They didn't seem to blink an eye at a 2500lb loaded camper on an F250. I spoke with the two of the largest (I think) PU camper dealers in Apache in PDX and Tom's Camperland in AZ.