Sad End to This Cautionary Tale, As Folks Start to Head Back Out Into the Wilds, Pls Be Careful

A reminder to be well prepared for whatever might get thrown at you when you take off for your spring or summer getaways.


“Authorities located a note in the (abandoned ) vehicle that read, "Two flat tires, headed to Mormon Point, have three days’ worth of water.”

Inyo County Sheriff's Office
TUCSON (KVOA) - Two missing Tucsonans have been located in California after they failed to return home on Sunday.

According to Inyo County Sheriff's Office, the department received a report about two potentially missing people, identified as 32-year-old Alexander Lofgren and 27-year-old Emily Henkel, may be in the area after they did not return home from a camping trip in Death Valley National Park.

While the deputies were unable to locate the couple after following their itinerary and checking highly frequented areas along Highway 190, the department located their white Subaru abandoned by Death Valley National Park officials at around 11 a.m. Thursday. ICSO said the vehicle's location was not on their itinerary.

Authorities located a note in the vehicle that read, "Two flat tires, headed to Mormon Point, have three days’ worth of water.”

Through the use of aerial reconnaissance, ICSO was able to locate the couple shortly after noon in a very remote area of Death Valley National Park on a very steep ledge.

According to ICSO, the couple has not yet been rescued due to the extreme location. At this time, the condition of Lofren and Henkel is not known.

An Inyo Search and Rescue technical team is scheduled to descend the canyon later Thursday evening.

AbleGuy said:
According to ICSO, the couple has not yet been rescued due to the extreme location. At this time, the condition of Lofren and Henkel is not known.
Click to expand...

They can't get a helicopter to them?

If they stayed with their vehicle, they would have been found much sooner. Lost or hurt? Stay put.
J

Sounds like Darwin has his eye on these two.

they were probably seeking cell service to make a distress call.

I'm headed to Death Valley tomorrow. Got my Garmin inReach mini which is about the only thing that you can communicate with in DV. Even the major road corridors don't have much cell service. No nearby HAM repeaters either, although you might be lucky and catch someone on simplex.

The popular internet story 'The Death Valley Germans' has been mentioned here a few times lately.......and this is exactly how it started.

Sounds like a good idea. Go onto ”very steep ledge” whilst lost.
Reportedly, the guy is Combat Engineer with recent experience enforcing foreign policy.
Sounds like the military failed teaching him common sense.

Or Land Navigation. So did they have a flat and keep driving until the other tire went flat or change one and then it went flat?

One of two missing campers from Tucson who were rescued from a remote, steep ledge in the Willow Creek area of Death Valley National Park died, officials announced Friday afternoon.

Alexander Lofgren, 32, was pronounced dead and Emily Henkel, 27, was hospitalized after the two were removed from the ledge at about noon on Friday, the Inyo County Sheriff's Office said on Facebook.

The couple, who were considered experienced campers, were found after a "lengthy" search throughout the park that started on Tuesday. The rescue was considered "highly technical," officials said.

“This has been a tremendously difficult operation in a very unforgiving geographic area of Inyo County, I sincerely hope for healing and recovery for all involved,” Inyo County Sheriff Jeff Hollowell stated, in a statement.

When the couple did not return on the due date of their camping trip, on Sunday, the sheriff's office was notified and started searching on Tuesday, officials said. The two had jugs of water, at least a day's worth of food and camping gear.

Park officials found the couple's missing white Subaru off Gold Valley Road, where a note left on the vehicle said “Two flat tires, headed to Mormon Point, have three days’ worth of water.” Their car broke down on the unmaintained, four-wheel-drive Gold Valley Road in Gold Valley near Smith Mountain, officials said.

Instead of hiking up to 22.5 miles to a paved road, the couple hiked west into wilderness toward Mormon Point, which is near paved road.

The Inyo Search and Rescue technical team found the couple 2 miles away from their destination through aerial reconnaissance of the extremely remote area, a statement said. A team attempted to reach the couple, but were initially unable to due to the extreme location.

Another attempt to reach the couple with an Inyo Search and Rescue team descending into the canyon started Thursday evening, officials said.

Lofgren, an Army veteran, served other veterans in southern Arizona
In 2019, Rep. Raul Grijalva announced that Lofgren was hired for his district staff as part of the Wounded Warrior Fellowship program.

“To know Alex was to know someone who loved life, loved his family, and loved helping others. Words cannot begin to describe the void this immeasurable loss leaves in the hearts of his colleagues and his family," Grijalva said, in a statement Friday.

Lofgren served four years in the U.S. Army as a combat engineer and deployed to Afghanistan in 2011, according to Grijalva. He also got his bachelor's degree in political science from Arizona State University. During his fellowship, Lofgren worked as a caseworker with southern Arizona veterans on issues regarding Veterans Affairs healthcare, benefits and more, according to a 2019 statement.

"Alex lived a life of service and always put the needs of others first," Grijalva said on Friday. "The passion he dedicated to his work each day touched countless lives. No matter the situation, Alex met those he helped with a smiling face, a caring heart, and unrivaled empathy."

Grijalva said Lofgren will "forever be a part of our family, and my heart is with his family, his loving partner Emily, and his colleagues who mourn him today.”

Reach the reporter at Audrey.Jensen@arizonarepublic.com or on Twitter at @Audreyj101.

What did he die from? Dehydration? Were they physically injured?

Sadly, it seems, they did everything wrong.
R

Instead of hiking up to 22.5 miles to a paved road, the couple hiked west into wilderness toward Mormon Point, which is near paved road.

The Inyo Search and Rescue technical team found the couple 2 miles away from their destination through aerial reconnaissance of the extremely remote area, a statement said. A team attempted to reach the couple, but were initially unable to due to the extreme location.
Click to expand...

If they started from Gold Valley Rd near Smith Mountain, then they started ~10 miles from Mormon Point... so they traveled ~8 miles. They were headed the right direction and not that far from a paved road where they could have flagged down some help. The "plan" seems very sensible IMO. 3 days of water and a <1 day hike to get help. I would not sit with the car in a remote area and hope someone arrived before I died... I'd take the hike. High temps were 78-92. Maybe an injury? If so then why didn't the woman continue to the paved road? Were they both injured? The terrain looks rough but not that bad. They were mostly following the drainage, so not lots of up and down. 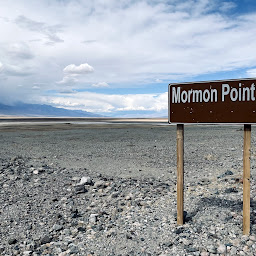