I was wondering if any Suzuki, Subaru, or other small vehicle owners have roof top tents on their rigs and if there have been any issues with weight and such.

I've got the Calmini roof rack on my Sidekick and the weight capacity is 200 lbs. I also have a Thule roof rack on our '13 WRX with a max capacity of 130 lbs. I'm not sure either would be suited to a roof top tent.

Any thoughts on this? Any "roof top tent 101" treads I should be looking at with regards to weight?

Generally, roof racks are rated for a "dynamic" weight. That is, the weight of the stuff on the rack when it is all packed up and driving down the road. During highway or off road driving, large bumps and vibrations occur frequently, and this puts a lot of stress on the rack/roof. Luckily, most racks will easily hold a RTT going down the road. Mine, even full of bedding, only weighs about 130-140 lbs. Both roof racks you described will easily hold that weight.

When you're in camp and the vehicle isn't moving, there is far less stress on the system, and therefore it will hold a lot more weight. Two Yakima crossbars will hold myself and my fiancee in the tent without issue. Also keep in mind that when you're in camp, about half the weight is supported by the tent's ladder. So as far as weight capacity goes, I'd say you're in good shape!

My suggestion is to have a look at the Front Runner Featherlite RTT. When it's all packed up, it's much lower profile than other RTTs, and it only weighs about 85 pounds. I think it would suit the Suzuki beautifully.

If I was throwing a RTT on top of a smaller vehicle, my main concern would be the size of the tent. Any smaller vehicle with a smaller engine isn't going to be too happy about having something with the aerodynamics of a brick bolted to the top of it. I imagine you'd take a fairly substantial mileage hit. Thule and Yakima both make wind deflectors that would go a long way towards making the whole thing more aerodynamic, and would help reduce the mpg loss. Having a lower profile tent would also make a big difference.

I've used mine on my SX4 for 3 seasons now on the OEM cross bars with a 150lb limit. My girlfriend and I are almost 400lbs together and the tent is ~130lb with bedding. No issues so far!

I also tow my trailer while also having the tent on the roof and it does just fine even though SX4's are bricks all on their own! I average just over 10L/100km with both the RTT and fully loaded vehicle and trailer at 105kmh.
Last edited: Aug 2, 2014

I've used a 120 lb Mombasa and a 95 lb FrontRunner Featurelite (same size as a Teui Ayer for all practical purposes) on my 4dr Sidekick with no problem. You do feel and know it is up there. In side angle situations, I'm much more careful not to bounce and get to much side to side sway going.

The ideal tent for compact rigs is the no longer available Oasis II, they weighed in at 50 lbs and had a 5-6" closed height. When running one on my Sidekick and Outback Sport, hardly felt it. You might be in luck on an Oasis II, I'm dropping you an email
A

My friend had a Maggiolina Extreme on his 2000 Golf TDI. He also had a 2" lift with upgraded Bilsteins. 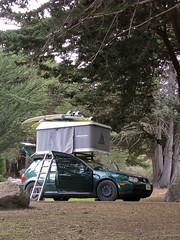 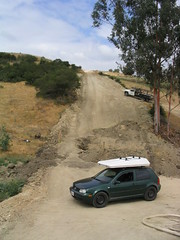 Here's the rest of the set

Tepui Ayer on an Isuzu VehiCROSS
Tepui may not be the best, but when I came off the AlCan and the Cassiar Highway Tepui fixed everything that went wrong right in their shop and threw in some extra goodies. It's seen -20f, 110f, 12" rain in one night, and held a snow load...best $900 (after shipping) I've spent on the rig. I ended up picking up a Dinnot trailer (in this case a narrowed J-Series Dinoot) last weekend. It's got Thule mounts and a rooftop tent will go on top. A smallish, lightweight tent will likely still be in order, however.

Unfortunately, I'm thinking the Ayer might be a bit tight. We've got a couple of Therm-A-Rests that are 25" wide each, which won't work with the Ayer's 48" width. I was also thinking about the Frontrunner Featherlite, which is five inches wider.

FrontRunner is a few inches wider, I actually had one on the trailer last year, it has since been sold. Unfortunately, FrontRunner is out of stock.

RTT's are popular in Europe, where EVERYTHING is a small vehicle. Yes, you'll feel the weight up there, and you may need to adjust your handling accordingly. You could see if Calmini still has some swaybars laying around for our Sidekick. I have a front bar on the Supertracker, and it made a huge difference.
As for the Subaru, look carefully at what the sheet metal does when you put some load on the bard. I have a set of Yakima Q-towers that have been on all sorts of vehicles. ON m Civic, the roof skin would deflect quite a bit when you pushed on them hard. On my E30, not one bit. You'd hate to trash the roof.

I am planning putting a Tepui Ayer on my Porsche Cayenne. I've never heard of a Dinnot trailer.

mep1811 said:
I am planning putting a Tepui Ayer on my Porsche Cayenne. I've never heard of a Dinnot trailer.
Click to expand...

Went and picked up a CVT Mt. Bailey RTT yesterday at the headquarters in Bend, OR yesterday. Looking forward to using it!
D

There's a campervan hire mob here that put them on Corollas:
http://www.wickedcampers.com.au/australia-campervans/van-type/mini-campers.html

Not affiliated in any way.

4WD Driving Skills: A Manual for On- and Off-Road Travel
by Vic Widman
From $17.27
A

I had an autohome columbus small on a honda accord sedan and a forester wagon with no problems.

As mentioned previously, it's the dynamic vs static weight that's important to keep in mind.

I think a Tepui Ayer RTT at 95#s would fit nicely on a small car, and is light enough that it could easily be removed when not in use.

I've got one on my trailer, which has a small 3' x 5' lid. Of course the small size does mean it's got a small interior, or as I'd say cozy for two relatively thin adults (it's like a double bed but longer inside). The advantage of going the trailer route is that the RTT can always be left in place and the trailer is always packed, ready to go. My trailer when packed with the RTT on top is 1100#s, and it's built a little on the heavy side due to the suspension, frame and tires. A trailer could certainly be built lighter for a car to tow. (Just get electric brakes on the trailer.)