I've spent the better half of six months building the polar express. I will create a full build thread here shortly. But I want to ask the forum of knowledge about my current situation. I built a VW style layout with sofa bed in back and a galley behind the driver seat. Platform is an agile Offroad converted RB E350 passenger with a CCV high top. I love having the room to stand up even when the top is down. My issue is twofold. I installed the sofa bed in the rear. Right over the rear axle. And the ride for the rear passengers is bouncy. Not because of the agile converson but rather because the sofa bed has flimsy springs and foam. I'm lucky my kids are young and don't notice, but I see them in the rear view mirror bouncing up and down for hours on end. It would make me sick but they don't seem to mind. I'm committed to this layout since I purchased a rear sofa bed from discountvantruck. Honestly it was made poorly with flimsy support. Its the Sedona model and I was told it would be the most comfortable bed. In fact it's anything but that There's a huge crevasse in the middle of the two cushions she laid flat. I feel honestly pretty ripped off with what it cost (1800). I wish I had just gone with a simple princess with straight cushions and not all the awful folds in the leather ( which I think is actually vinyl of some sort)

In any case besides that is there anything I can do to make it less bouncy. I was thinking of putting some cross member underneath the cushion to prevent it going up and down. And now I realize why people go with the Goucho style or a removable bench behind the drivers seats.

Without re doing my whole layout. Does anyone have any thoughts on how I can make the rear bed less bouncy. I was thinking to try and bring it a foot or so forward of the axle. But then it will run into my galley and that will have to be re positioned. Uuugh. Dreading that and just thinking I have to live with it. In hindsight maybe I should have just installed a quick disconnect bench seat behind the front seats.

Some sort of lost...

Yep, that's why I have four captain's chairs up front. We rented an EB sportsmobile (EB-50 or similar layout), and the rear seat was awful. Soft and bouncy and awful, especially with car seats. Interior was so noisy I couldn't communicate with the kids. Mine are in car seats too, so I had to remove and store the car seats to make a bed. It wasn't for us.

For now I'm planning either an EB-27 or EB-31 style layout. Captain's chairs stay put, car seats stay out. Small dinette/bed for the kids to sleep in and less open space/storage. Everything is a compromise, but the rear Sienna seats are WAY better than a crappy gaucho. Also easier to communicate, easier to heat/cool the kids during transit etc.
D

lcavalletti said:
In any case besides that is there anything I can do to make it less bouncy. I was thinking of putting some cross member underneath the cushion to prevent it going up and down. And now I realize why people go with the Groucho style. But would have no idea how to install shoulder belts with a Groucho. Lap belts are not acceptable for kids.

Without re doing my whole layout. Does anyone have any thoughts on how I can make the rear bed less bouncy.
Click to expand...

If the whole rear of the van is bouncing, consider dialing in your suspension for the weight you carry. If you are bouncing that much you are likely oversprung and/or under dampened for the weight. If you need the carrying capacity for towing and/or hauling occasionally, you could decrease your spring rate and add air bags and adjustable shocks.

If it is just the seat that is too bouncy maybe replace the springs with high density foam on plywood.
L

drsmonkey said:
If the whole rear of the van is bouncing, consider dialing in your suspension for the weight you carry. If you are bouncing that much you are likely oversprung and/or under dampened for the weight. If you need the carrying capacity for towing and/or hauling occasionally, you could decrease your spring rate and add air bags and adjustable shocks.

If it is just the seat that is too bouncy maybe replace the springs with high density foam on plywood.
Click to expand...

At the moment there is very little weight in the rear. Just the sofa bed and my kids. I currently have an added leaf and blocks to match the front height. Are you saying I can scrap the leafs all together and go with a coil spring and shock setup. Or are you saying just add air bags to the existing setup with a leaf modification? Can one use air bags and shocks only with no leaf springs. Does anyone have this setup? I don't tow anything but a lightweight trailer for sand toys or a dingy on a trailer.

As for the plywood idea I may try that first to see if it does anything for the ride. The sofa bed center seat is excessively springy. Poor quality design if you ask me

Capt chairs are just not an option. There would be zero room in the cabin when camping. Its an RB not an EB

Strong strapping run semi-taut adjacent the couch springs would be my first attempt. Did it on truck bench seats we put in a bus. We took the seat belts from the trucks and wrapped them around the front tube of the seat frames a single layer, ran a self-tapper screw with a fender washer through to hold it, then ran it over the rear bar and screwed it there too. Basically like a suspension limiting strap for the seat springs. The springs are rebound damping (butt up), the straps are for compression (butt down). We ran out of screws and just tied the last few straps around the tubes, that also worked but took a bit more fiddling.
Last edited: Feb 9, 2017

I'm sorry to hear a seat that cost $1800 has so many compromises. Switching to coil springs in the rear would be a major PITA. I'd stay with leaf springs.

It does sound like the ride is much rougher than it should be. Add a leafs are notorious for creating a harsher ride. Would you have enough height if you removed the extra leaf? How tall are the blocks? What condition are your original springs in?

With air bags, you can run softer springs for better ride quality and adjust air pressure to fine tune load carrying capacity. I use them on a 4x4 to compensate for the hardtop when using it, and to level it slightly. I find they ride much nicer than leaf springs alone when the rig is loaded. I do find they will slowly loose pressure... which can be a minor inconvenience. The benefit, if budget allows, is that you can adjust them on the fly. I've found travel has increased, but many report they restrict travel. Many airbag setups aren't well designed... they're built cheap and dirty.
J


I have no seats in the back of my van but I have lots of weight in the back and it rides nice.


Maybe lighter springs with more leafs and tuneable shocks will help , also tires and being out of round or un balanced won't help.

Johny5 said:
Just for fun try and add 3-400 lbs of sand bags and see how it rides


I have no seats in the back of my van but I have lots of weight in the back and it rides nice.


Maybe lighter springs with more leafs and tuneable shocks will help , also tires and being out of round or un balanced won't help.
Click to expand...

Great advice, the weight will probably make the chassis dynamics better such as more rear braking and less top heavy and of course the ride. The 50/50 weight balance sports car guys strive for works for everybody, the closer the better even if a van will most likely never get there, every little bit helps. Agile can set you up with some proper rear springs, add a leafs are kind of crude on a passenger vehicle. Air bags work well as an addition to some soft riding springs but wont fix your issue.

I have never liked any aftermarket fold down sofa for sleeping or going down the road, try the seat belt mod under the cushions you might find that and some weight are good enough.

I will 2nd this approach. Just grab a couple of tie down straps and put then around the frame where you are having the problems and see if it helps. Simple, cheap and easily done. If it doesn't help then you are down a few minutes of your time (reuse the tie down straps).

And yes I got caught with the higher priced sofa having uncomfortable creases in it. But the cheapest one is the most comfortable from my experience. Luckily because these were delivered Tuesday. 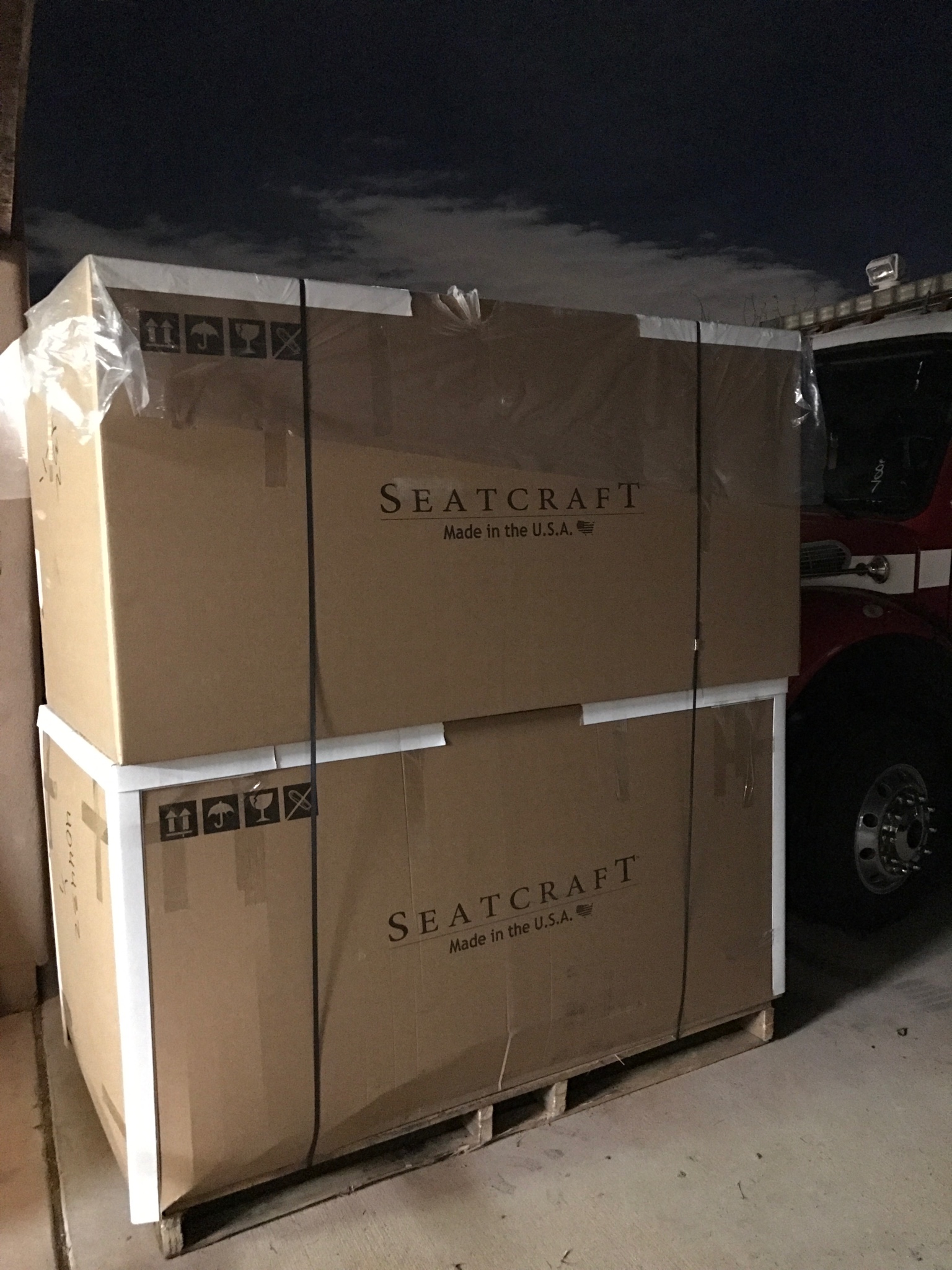 I'm also of the opinion that the problem probably isn't so much the seat, but the suspension. With the extra leaf and no payload... that sounds terrible.

Also just want to add that we purchased our "princess" sofa bed from shop4seats, at the time, I don't think discountvantruck sold sofabeds. Anyway, looking at them both now, shop4seats is still ~$300 cheaper for the same thing! Yowza.

I agree with others about not having any weight in the back will cause an undesireable bounce. I'm also a fan of these

I installed them on the Quigley E350 and am more than happy with the ride quality now.
L

Unfortunately I don't think either are very good. I've seen both companies products and in my opinion the frames are flimsy steel and neither would fair well in an accident. I regret not going to an aftermarket company that specializes in van conversions for a product that is superior. You get what you pay for, and in the case of shopforseats.com and discountvantruck. Its all crap
R

Look at your rear tire pressure too. Are your shocks good?

Sent from my Passport
L

ripperj said:
Look at your rear tire pressure too. Are your shocks good?

Shocks are new custom valved
fox 2.0 tire pressure is where it should be

Another option that would be a bit labor intensive. You could have the foam redone, and possible adjust the springs in the seat (compress them for shorter travel) most of the seats are a really simple rectangle.

Remove the hog rings, just cut them off will be the easiest their a pain otherwise. The cover should slide right off, you can take that foam to an auto upholstery shop and get something more to your liking. All the seat guys except for 1 I've found use the cheapest foam possible. Have it cut to match then reinstall. Remember the hog rings, don't use them when the fabric goes back on. They will make you bleed and you'll have to buy special pliers. Use black zip ties to go thru the fabric and around seat frame and push them up and put of the way without cutting the tail end. This way they'll never grab on anything or injure the kiddos while their playing in the van. About a three hour job.
You must log in or register to reply here.
Share:
Facebook Twitter Reddit Pinterest Tumblr WhatsApp Email Link
Facebook Twitter Youtube Instagram
Top